This weeks LEGO Ideas Feature will make you want to re-watch this modern classic as it pays tribute and marks the 40th Anniversary of, in my opinion, the all time greats – Indiana Jones and the Raiders of the Lost Ark! 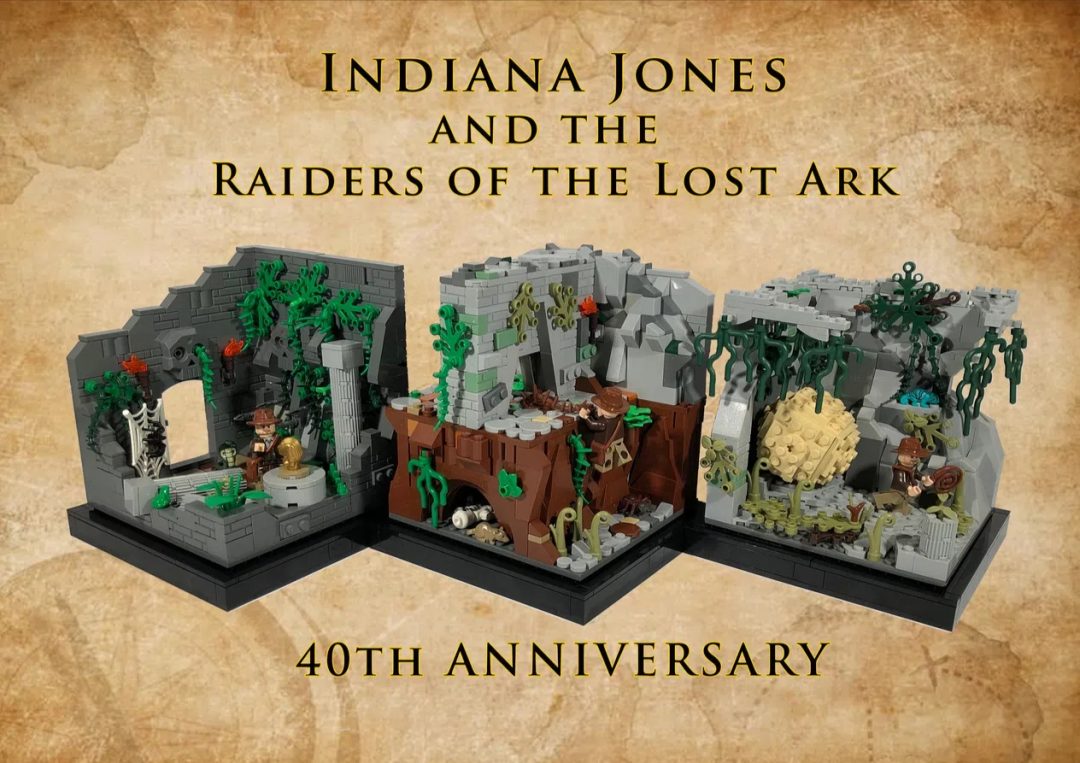 It’s creator, Simon Scott (TVRulesMyLife), who we’ve featured before, is back with another awe-inspiring creation in the form of three vignettes based on the iconic opening scene from the movie. Each one is filled with unique details and helps tell the story in LEGO form.

Let’s start with the first vignette and the opening scene of the movie. We meet Indiana Jones at a temple in Peru in search of and finding the Golden Idol. 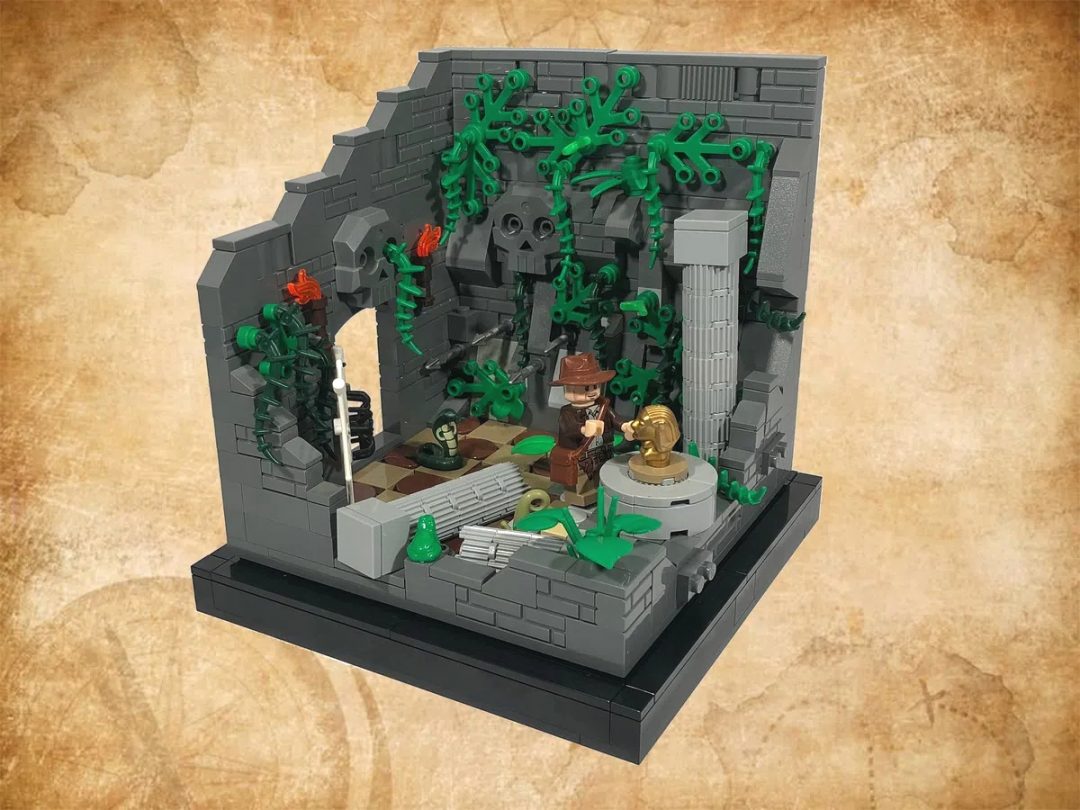 The detail here is incredible and there are a lot of things to see, I particularly like the pillar that has long since fallen. The Golden Idol looks spot on and would make such a cool piece to have, being in only one set (Temple Escape 7623) it is considered quite rare and usually goes for a small fortune! 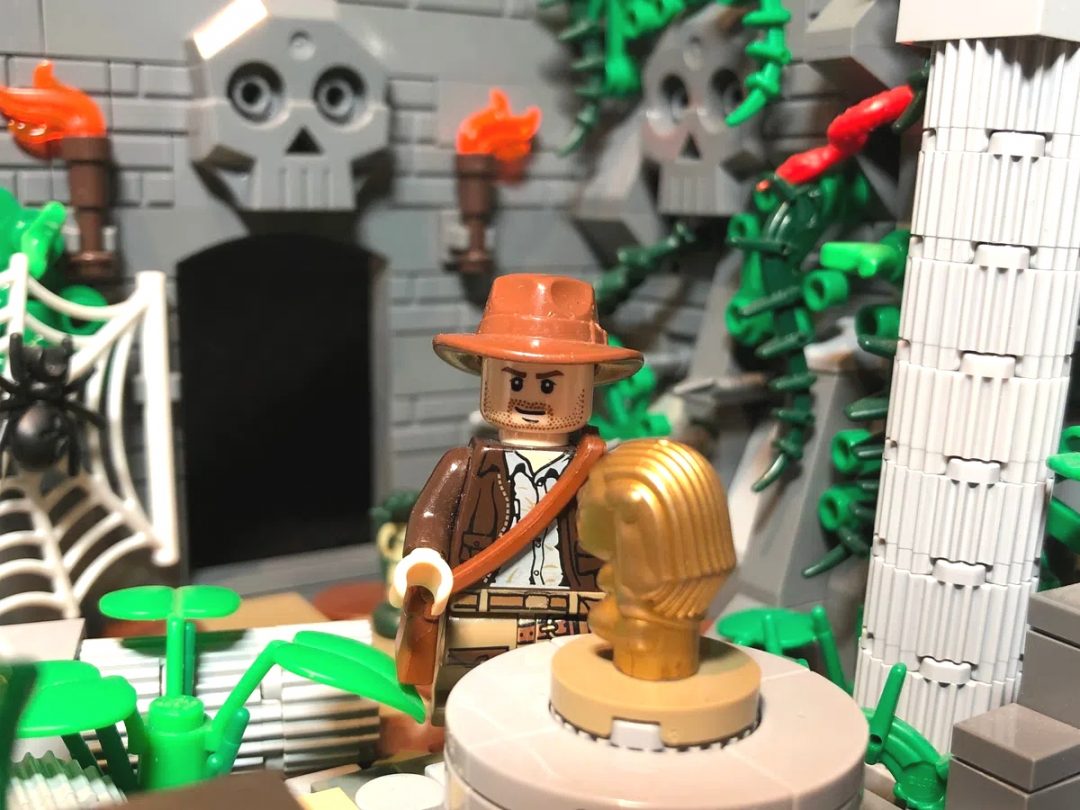 I can’t quite make it out from the photo but wouldn’t it be awesome if the plate lowered just like in the movie, it would make for a great playability feature.

The second vignette is just moments after when Indy passes the Golden Idol to his companion who ultimately leaves him high & dry. It’s sees Indy hanging on for dear life to a dead vine, he must pull himself up and escape before the door seals shut! 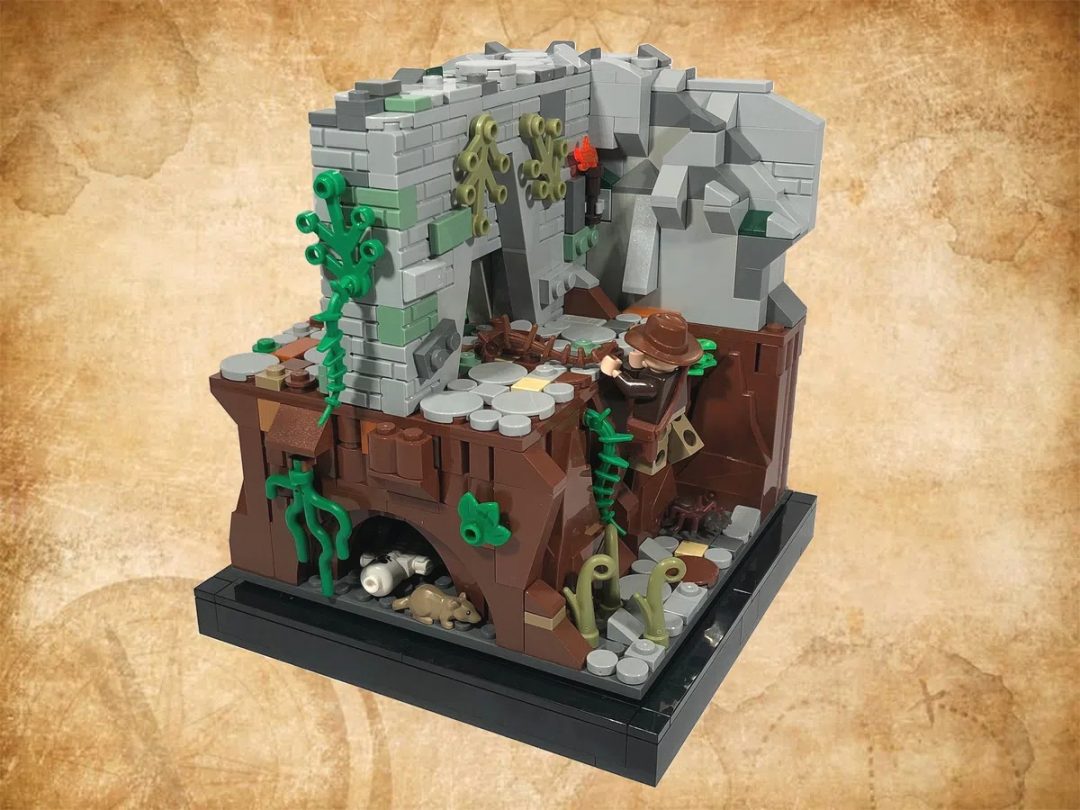 I like this small vignettes as each time you look at them you see something new. The pit in which Indy is trying to get out of is covered in roots and pebbles and is home to a nasty looking spider. You really get the sense of danger in this brick-built scene and it’s great.

So. On has done a marvellous job in adding his own personal touches to it with the inclusion of a hidden Skeleton at the base of the build and a Rat nearby, we hate to think how that poor soul got trapped there, but it all adds to the dangers of artifact hunting. 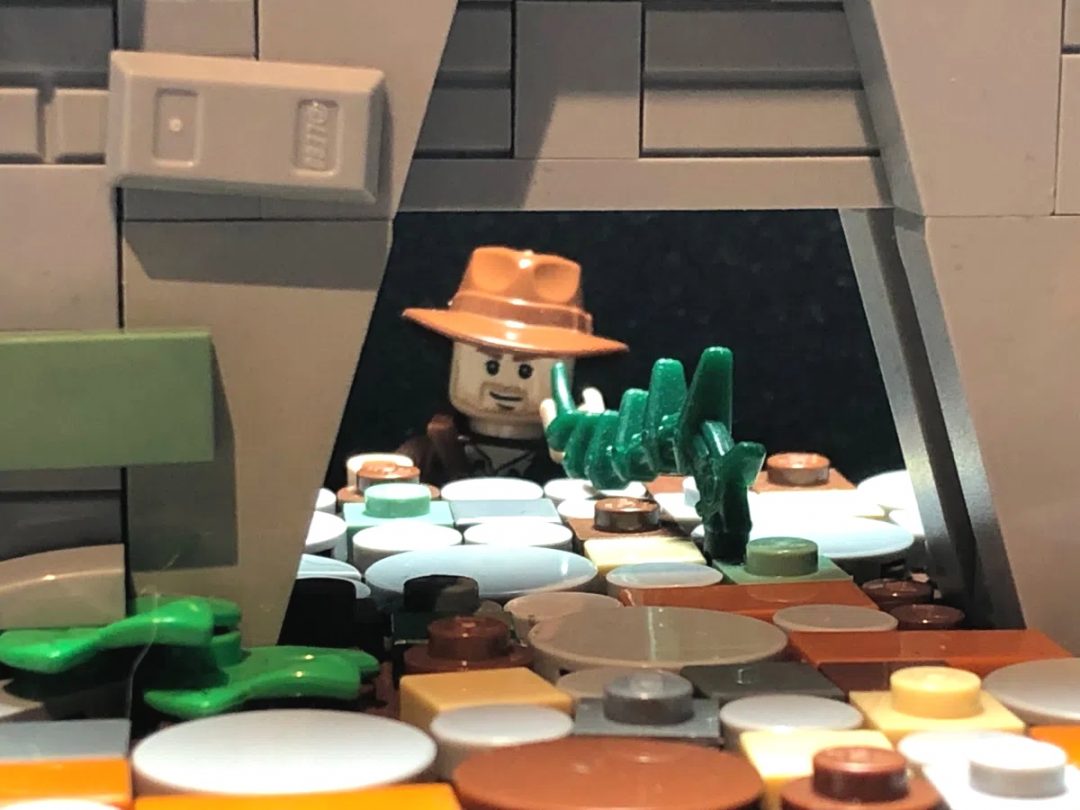 The third part is taken from the scene everyone knows or has heard about, the boulder.

It’s such an iconic part of the whole franchise really and has been recreated amazingly well here in LEGO form.

With all the added foliage dangling from the cave ceiling it really adds to the aesthetic, along with the weeds on the floor and the random chameleon. 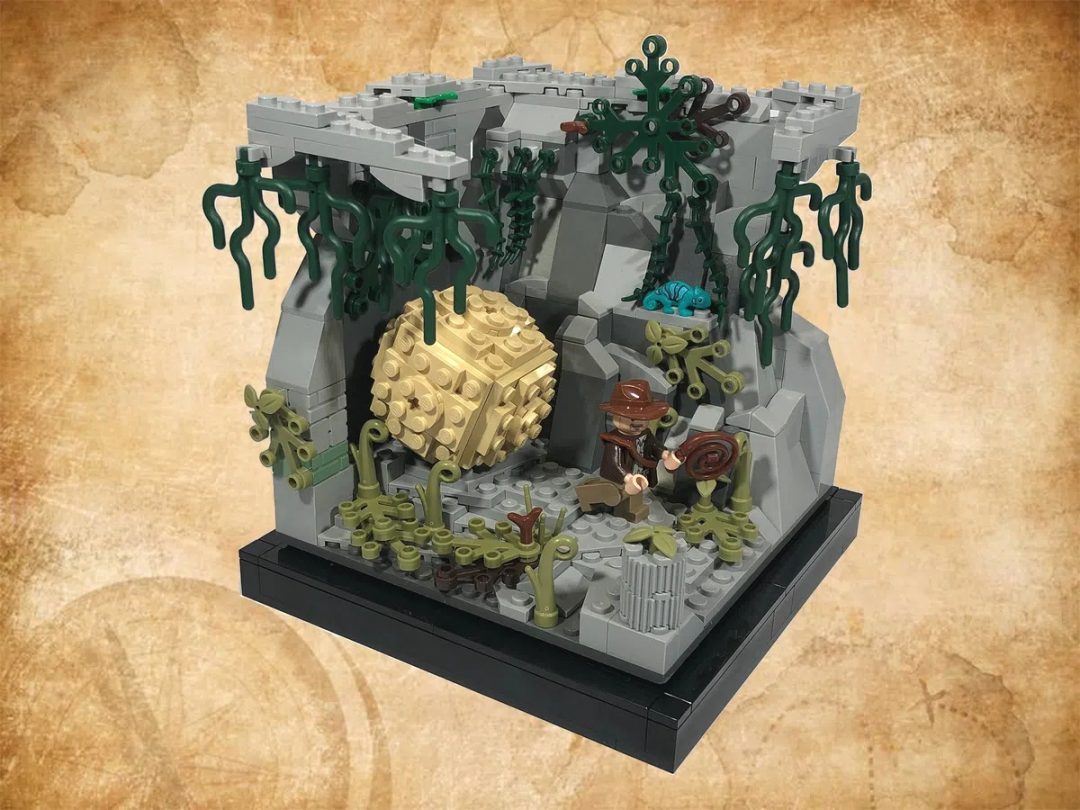 From the looks of it each build fits onto a 16×16 plate with an added stud width for the black plinth. I love building in this scale and should get back into myself one day. The whole 80s/90s era of film really appeals to me, being an 80s child myself, although I probably didn’t watch these movies until slightly older in the early 90s. 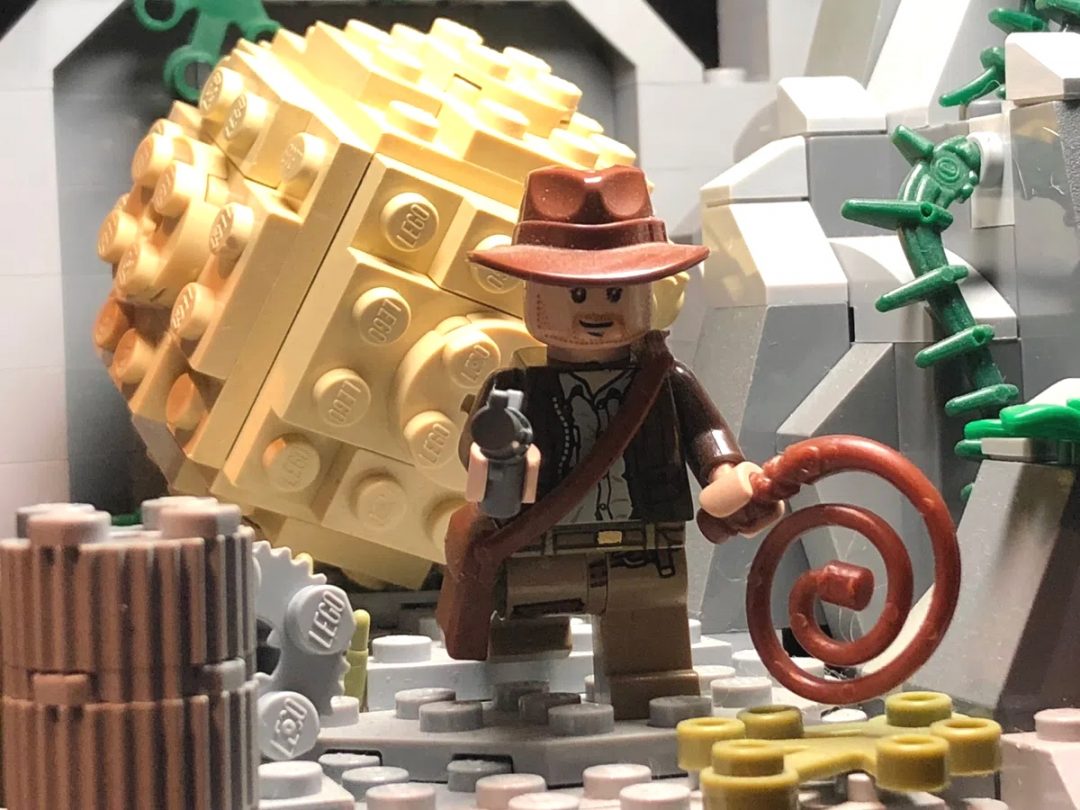 This is why I chose to feature Simon’s new idea, it brought back fond memories of my childhood. The way each vignette tells its own mini story and once combined depicts the whole opening scene of the very first Indiana Jones movie!

Simon has also included close-up shots which fantastically gives us an almost first person perspective. The angles used frame each scene perfectly and really contributes to the finished product idea and that all important task of gaining support.

We managed to get in contact with Simon to ask him a series of questions which form a mini interview. Find out below what inspired him, what other movies he’d like to recreate and what’s coming next!

Don’t forget if you like this product idea please click the support link found at the end of this article, thank you.

With so many other great 80s movies why was Indiana Jones your inspiration for a LEGO Ideas set?

I’m a huge movie fan and Raiders is one of my favourite films. I remember see it as a child and now enjoy re-watching with my own kids.

Roughly how many pieces are in the build, and where to you source your parts from?

Though with most of my builds I don’t really keep a track of pieces used. I’d estimate in total it to be around 900 pieces.

Did you incorporate any play features into the product idea?

I didn’t on these particular models as LEGO had already released a play set of this particular theme originally. These were built more of a tribute for the films 40th Anniversary.

Why did you decide to make three separate vignettes?

I started with the Idol Grab scene initially and was really happy with it but I didn’t think it was substantial enough for a display piece for me. Adding the two other memorable scenes from the film’s opening created a nice arc and the three of them work well together

What other modern classic movie(s) would you like to recreate and why?

Scenes from Temple of Doom and The Last Crusade are next on my list to complete the Trilogy of Trilogies. I’ve already managed one from each film so far. After Indiana I’d like to tackle the Back to the Future Trilogy next maybe.

I remember having a little LEGO as a child but I guess having children of my own really reawakened my love of the plastic brick. Buying a few sets “for the kids” became a more regular occurence and as their interest has started to diminish as they’ve got older I’ve found mine has only grown along with becoming a joint interest with my wife Julie.

Apart from making MOC’s/Product ideas, what other aspects of LEGO do you like, sets, minifigures etc?

I am a sucker for a minifigure to be honest. I love the randomness of the CMF ranges that LEGO bring out.
Joining up and chatting with like-minded AFOLS on facebook groups in the last few years has really cemented my love for LEGO though. I’ve made some really good lifelong friends as a result, which wouldn’t have happened without LEGO.

As many of my AFOL friends will point out. I do like to have a tiled finish to most of my builds. Those little studs are an integral part of a LEGO piece – but I do like covering them up.

I take part in regular build off competitions on facebook groups and with the LUGs I’m a member of, most of which range from 90 minutes to 24hrs so a lot of the builds I create happen in that sort of timeframe. I like working to a deadline as I find it gives me focus.

Fingers crossed, with some LEGO shows starting to be organised post covid restrictions, I’m currently revisiting some old projects I was in the middle of completing this time last year. I’m hoping to show them all off at Hull Brickfest first in August if all goes to plan. I’m also working on a commission that I’ve been asked to create too – but I can’t divulge too much about it I’m afraid.

What advice would you give to beginner MOC/Product idea builders?

Just build what you’re passionate about – I love the Indiana Jones movies but I missed the release of the original LEGO theme. (During my dark times!) Play around with a few ideas – there’s no hard or fast rules when it comes to MOCs.

Neither of my LEGO idea submissions started out being built for LEGO ideas – I built them because I wanted to build them for me. Try joining some Lego groups or a LUG and get ideas, advice from fellow LEGO fans – It’s a wonderful community to be part of.

A big thank you to Simon for letting us feature his product idea and to participating in the interview, we wish you the best of luck with gaining the required support!

LEGO is set ‘to hire hundreds’ in digital expansion in UK! 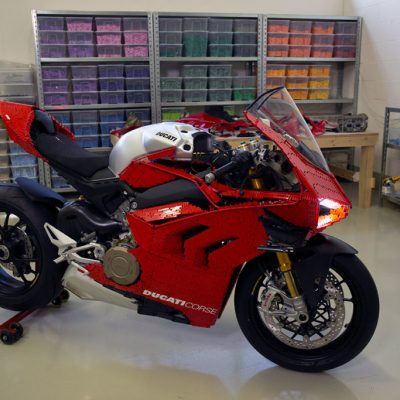 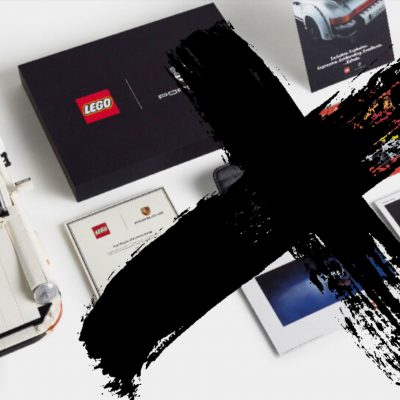