The LEGO City theme is one that is here to stay and rightly so, as every season we get a plethora of great looking builds to enjoy and add to our collection and Cityscapes. When it comes to the Magazines, under the same name, you get a chance to enhance the playability, add unique & quirky scenes, and fill your City with different characters and accessories!

I’m surprised there are only 38 issues in this line as it seems to have been running for a while. With every other LEGO magazine released I tend to pick and choose which suits me best and what the freebie is, if I spot a Minifigure on the front I instantly pick it up, I just can’t resist them. 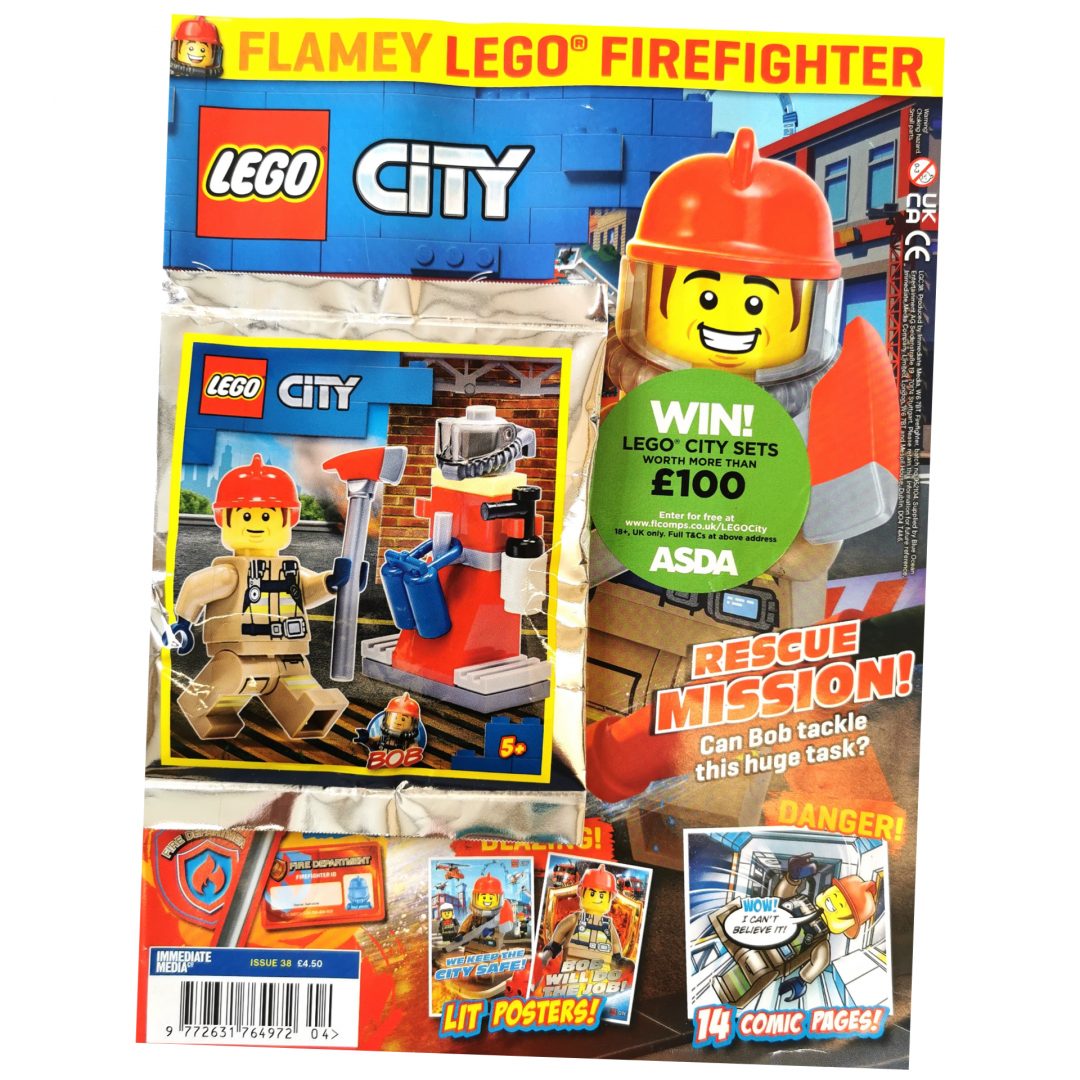 This issue of LEGO City magazine (issue 38) features the fire service and adds a very interesting yet fun character into the mix, Bob the Firefighter! 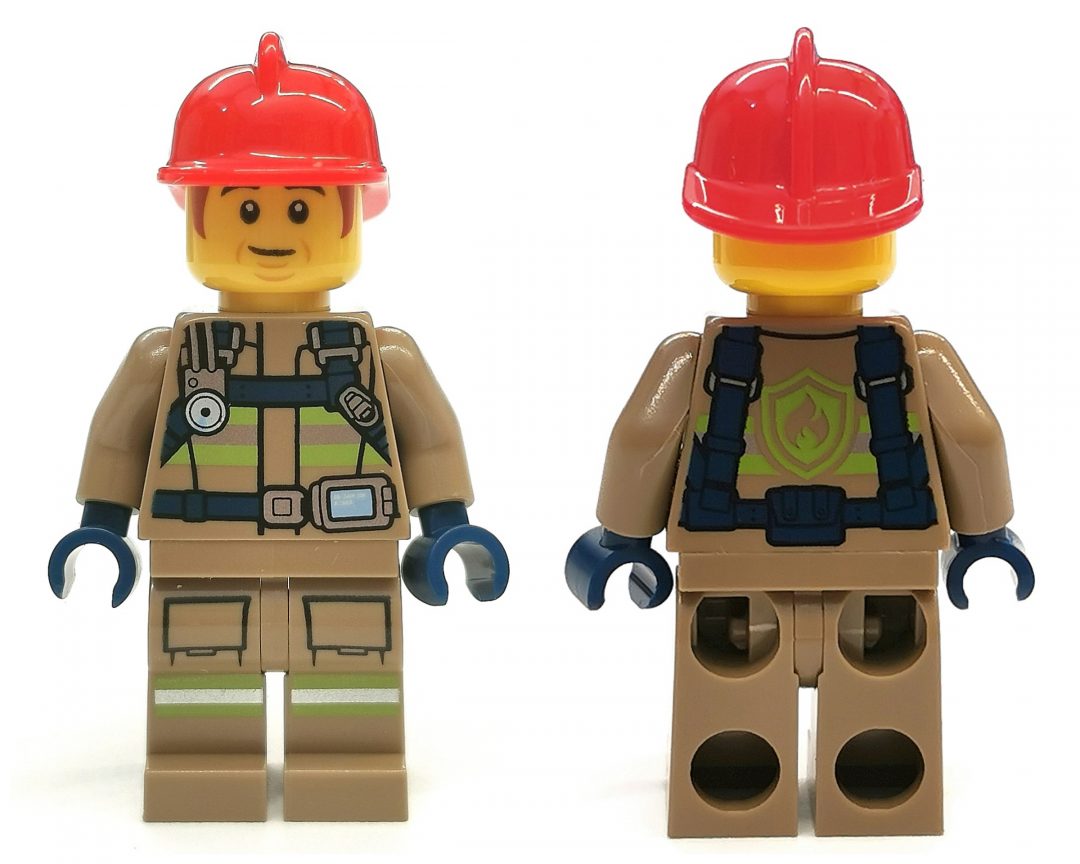 As you can see from the front cover Bob, and his accessories, is the gift and at the slightly higher price of £4.50 I think LEGO has done well. Not only do we get an awesome Minifigure but we get a full arsenal of firefighting equipment too, from a very cool axe and extinguisher to a helmet and blue airtank – There’s even a place to store them when Bob is finished! 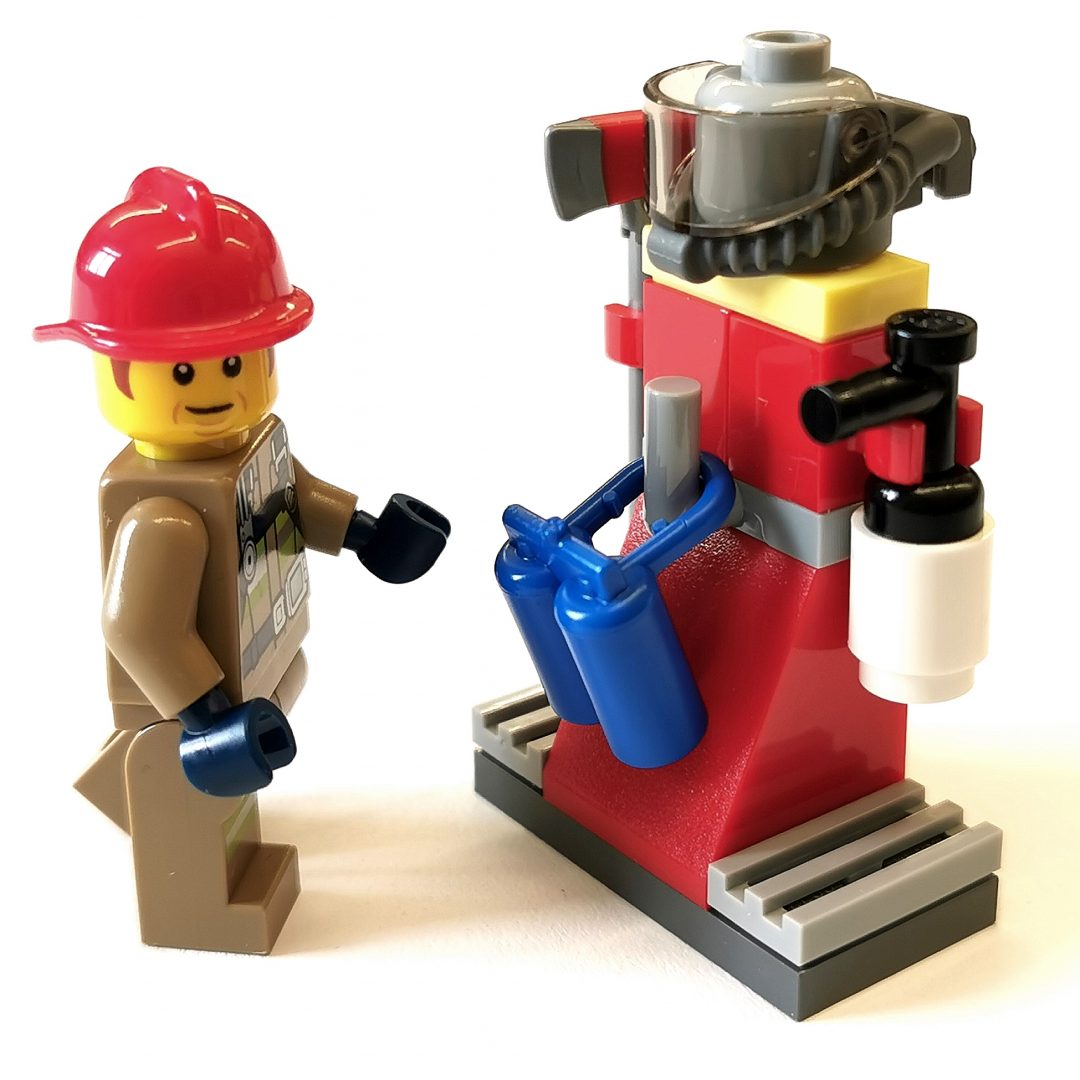 The design and printing are top notch as always and the amount of detail on the torso and legs is nice with his harness, pager, oxygen supply, pockets and fluorescent strips.

Getting one of the newer axes is always a good thing as they look the part compared to the older solid colour pieces.

The inclusion of the blue ait tank is nice but perhaps a red or new colour piece may have been more suitable. Either way the air tank is a great addition to the over look of the Minifigure and adds so much more to the playability aspect. 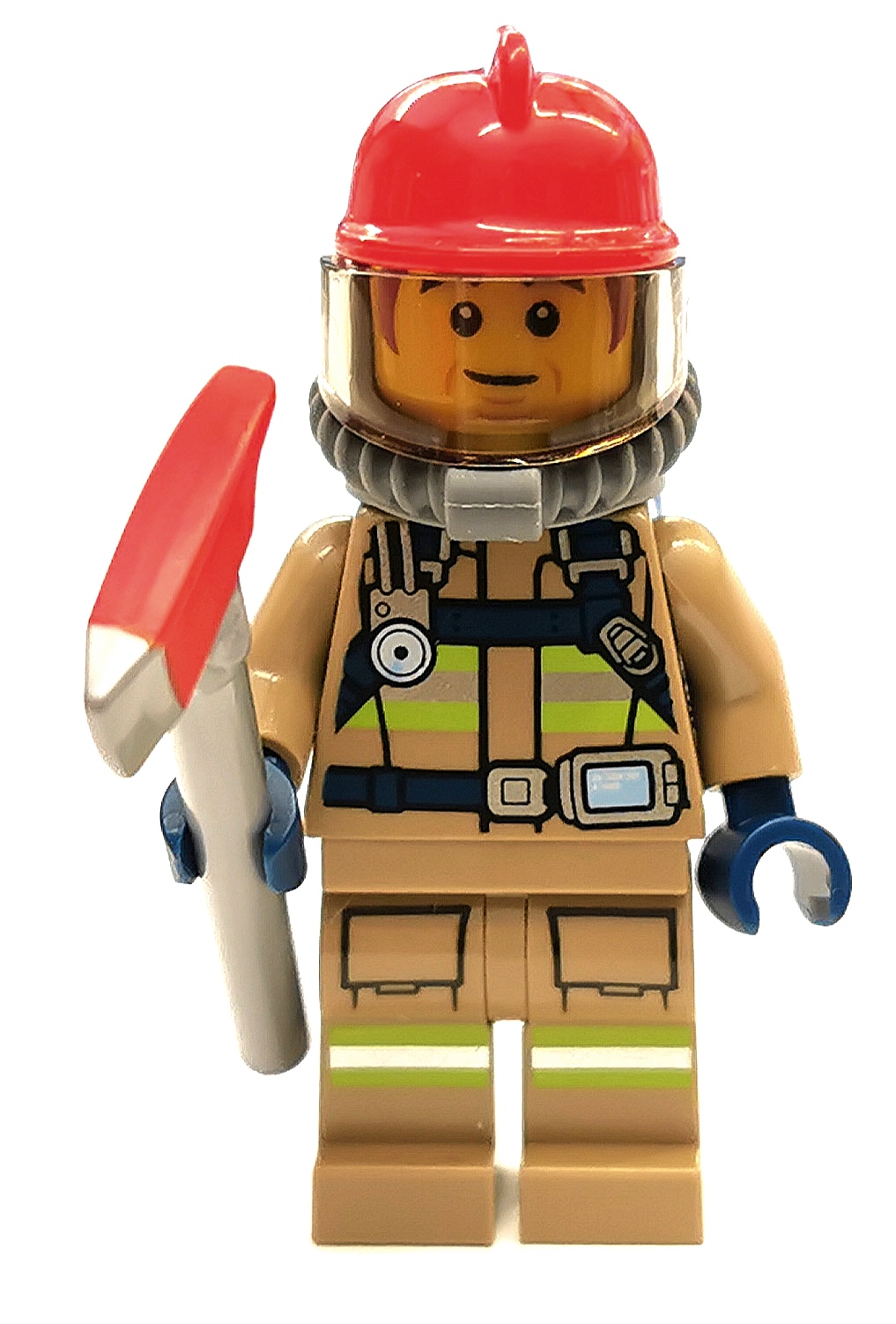 The Magazine is jam-packed with puzzles and activities, it even has a decent comic story too which sees two big-wig rivals accidentally starting fires in their offices in opposite tower blocks.

The fire brigade, and Bob of course, come rushing but which one will they put out and svmave first. The two feuding bosses try and stop each other from being rescued while Bob and his team make their way up the towers and along the way come across some very funny and strange rooms.

You’ll have to read the Comic yourself to find out what happens at the end, it’s well worth a read! 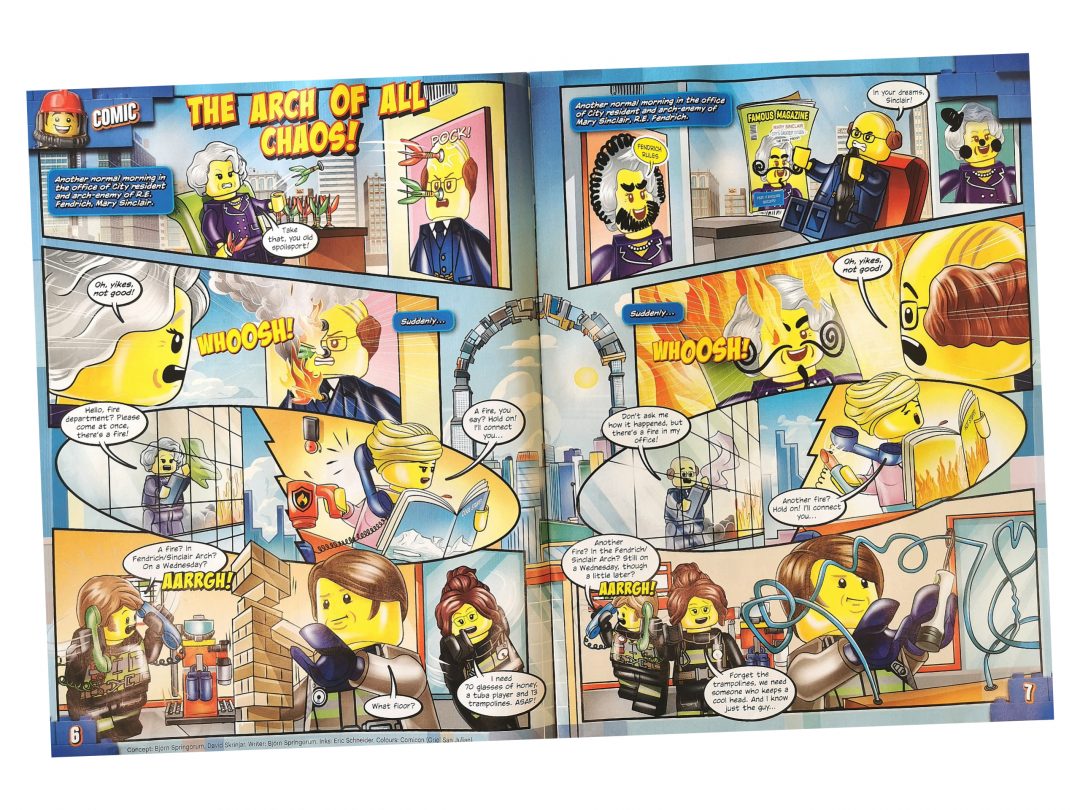 Along with the awesome comic you get a handful of puzzles and games, the first in this issue is a cool hand-eye coordination test that requires you to draw a line from start to finish without touching the sides, great for younger fans to get stuck into and help their development. 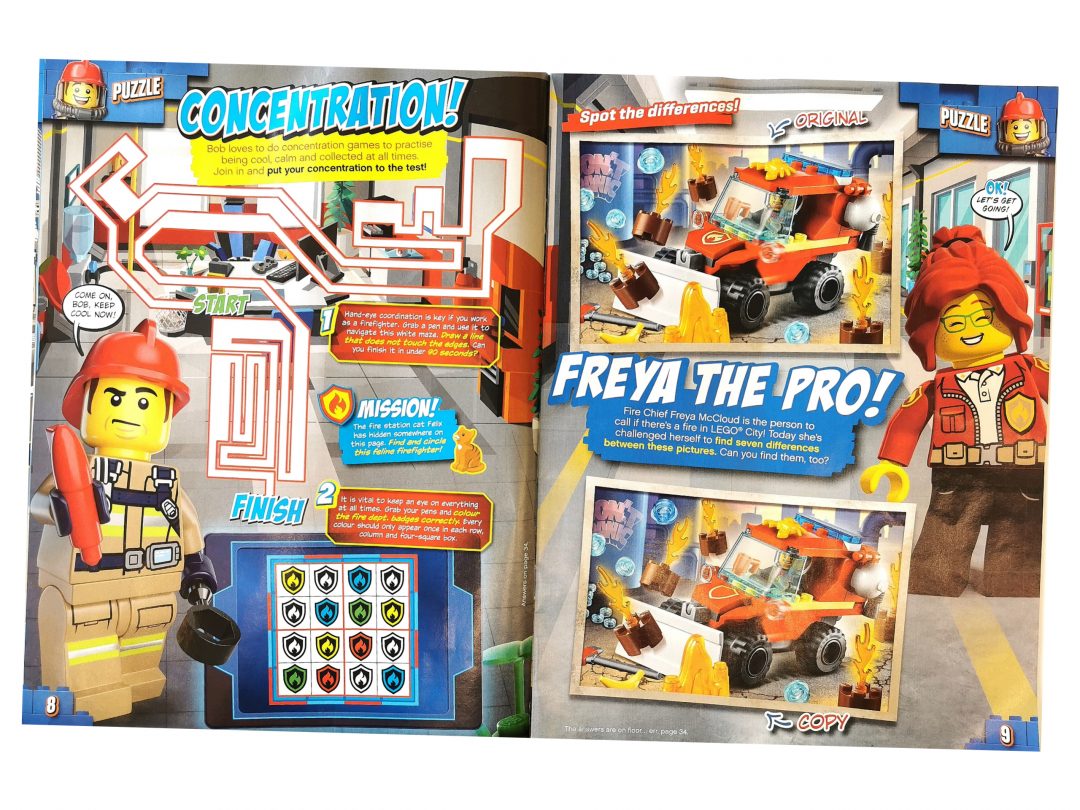 On the opposite page is a classic spot the difference game, you’ll need to help Freda spot seven differences within the two images of a firetruck/plow type vehicle.

Another double page spread puzzle involves four stages to complete and is genuinely quite fun, even for an older fan of LEGO. Bob needs to maintain his radio and thus requires your help to rewire his circuit board, figure out the code, join his colleagues on a certain frequency and finally make and keep a secure connection to the Firefighter Network – easy right?! 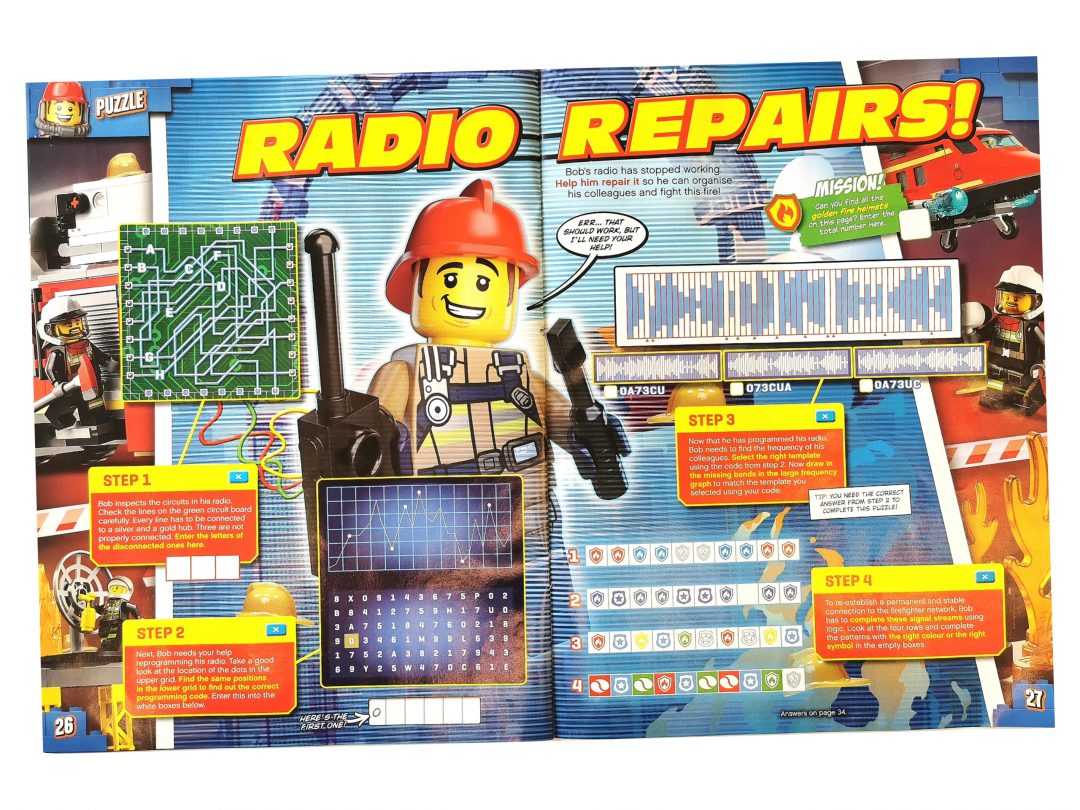 There’s a common feature found throughout all iterations of LEGO magazines and that’s a selection of actual LEGO sets, which gives you the lowdown on them and their features, great for getting an idea for your next LEGO City purchase. 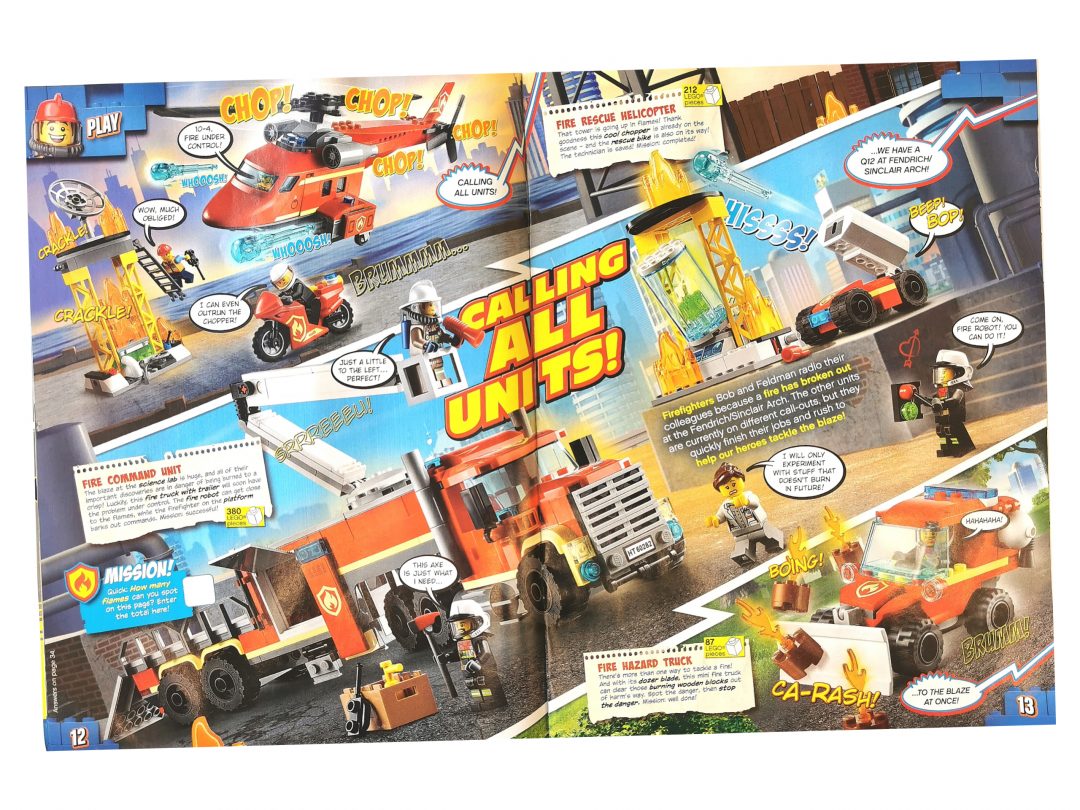 Another growing tradition is the inclusion of a cutout on the back cover, this issue has a firefighters badge, ID card, and cool axe. You will have to give younger fans a hand with the scissors, obviously, but you’ll be kitted out in no time and ready to fight those paper flames (not included). 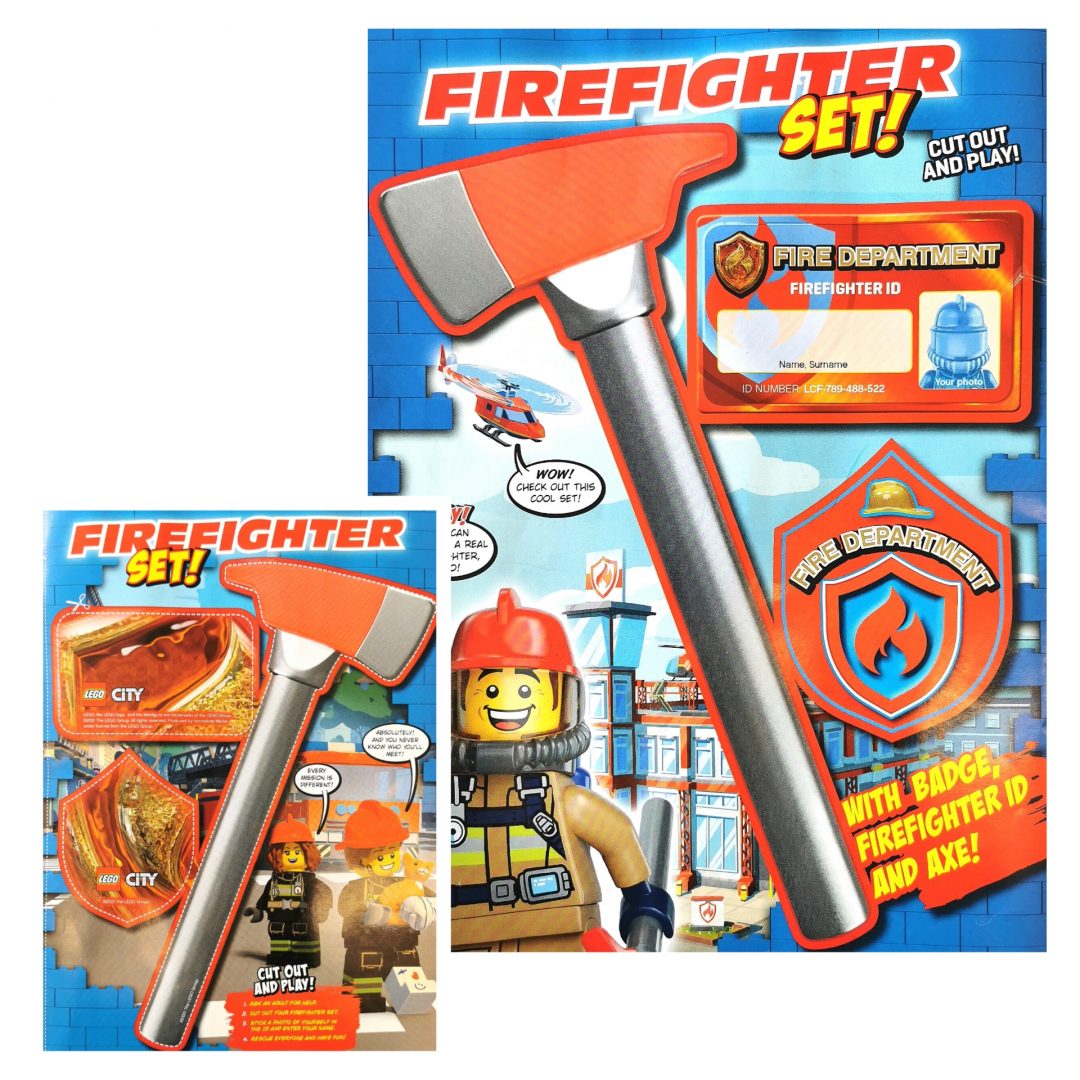 Included in the magazine is a double-sided poster again featuring the man of the hour Bob. I can actually see these being used more so than any other previous posters as they’re very cool and unique, everyone loves a good inspirational message, even if you aren’t called Bob! Whice side will you display? 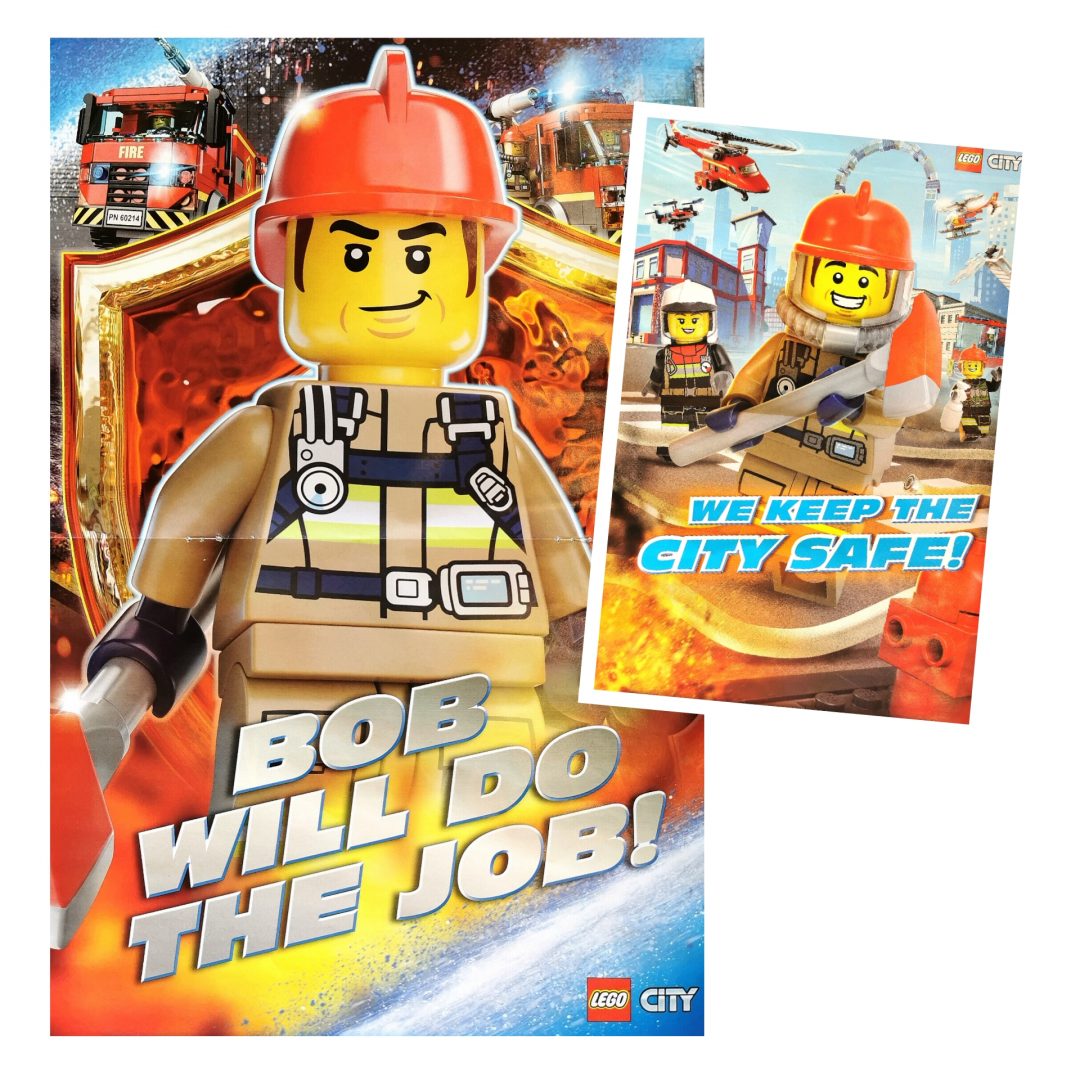 For a sneaky peek at next issues freebie take a look below, and I think you’ll agree with us it’s going to be a must get. It includes two Minifigures and a set of hospital accessories, perfect for your growing City! 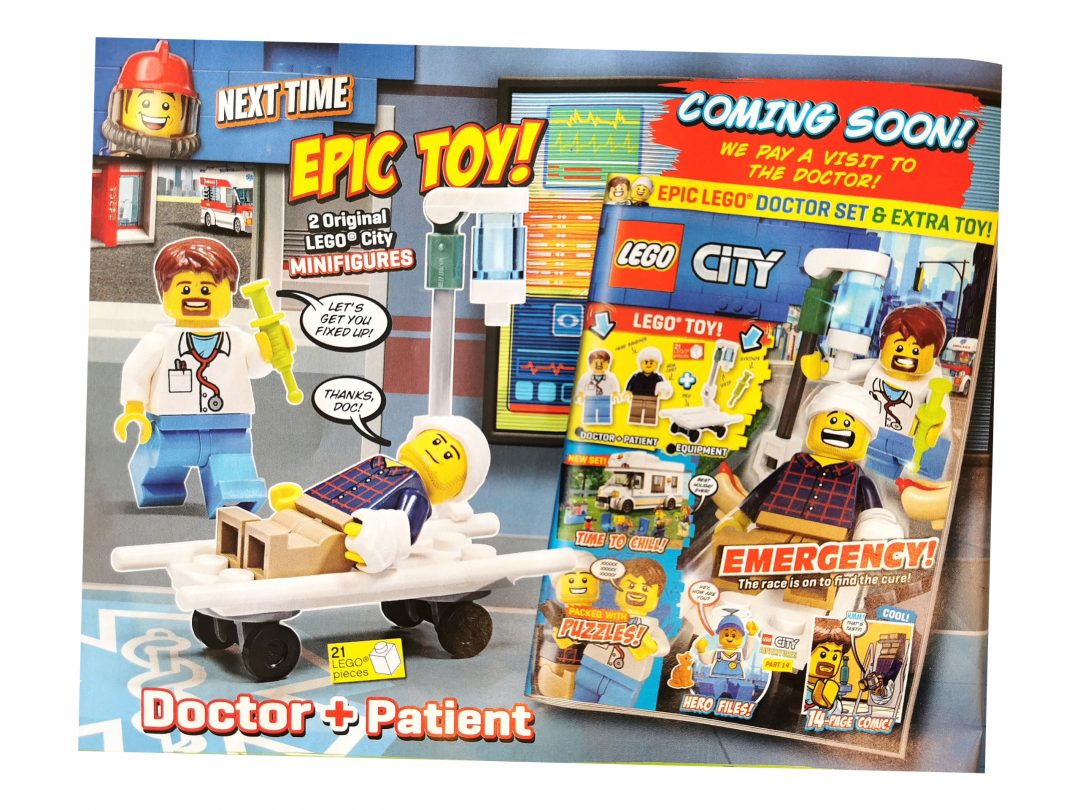 Overall this issue is great and worth every penny, as not only do you get a full set of firefighting accessories but also a very cool character in the form of Bob!

The Magazine is also up there with the best as you get some unique puzzles and activities. You can also cut out your own firefighters kit – badge, ID card, and an axe.

We highly recommend this and every other iteration of LEGO magazine as they’re a good source of fun and learning for younger fans.

Thank you for reading this magazine review, we really appreciate your time. Please leave us a comment, below, with any questions and we’ll do our best to answer them.

Until the next review, keep on bricking! 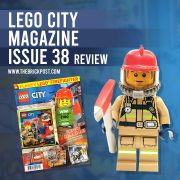 Complete with Bob the Firefighter Minifigure!
9.5

Overall this issue is great and worth every penny, as not only do you get a full set of firefighting accessories but also a very cool character in the form of Bob! The Magazine is also up there with the best as you get some unique puzzles and activities. You can also cut out your own firefighters kit - badge, ID card, and an axe. We highly recommend this and every other iteration of LEGO magazine as they're a good source of fun and learning for younger fans. 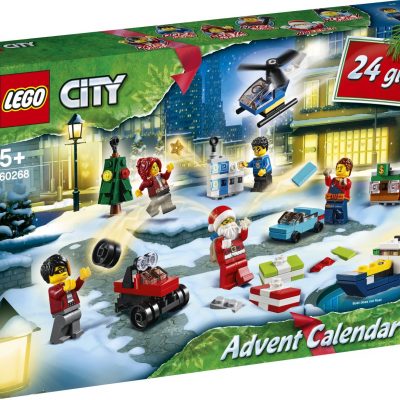 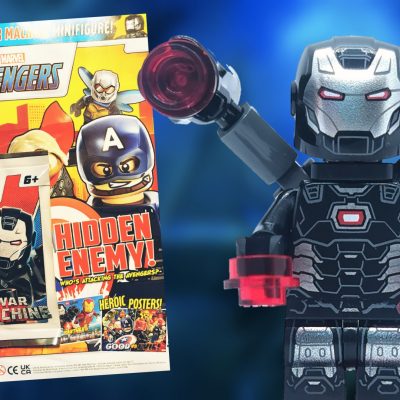