Modulars, can’t get enough of them. I collect them, create them (sometimes), and love adding them to the future City lineup. It’s the perfect segway into this week’s LEGO Ideas Feature, Fire Station Modular by Cristhoper_dh. 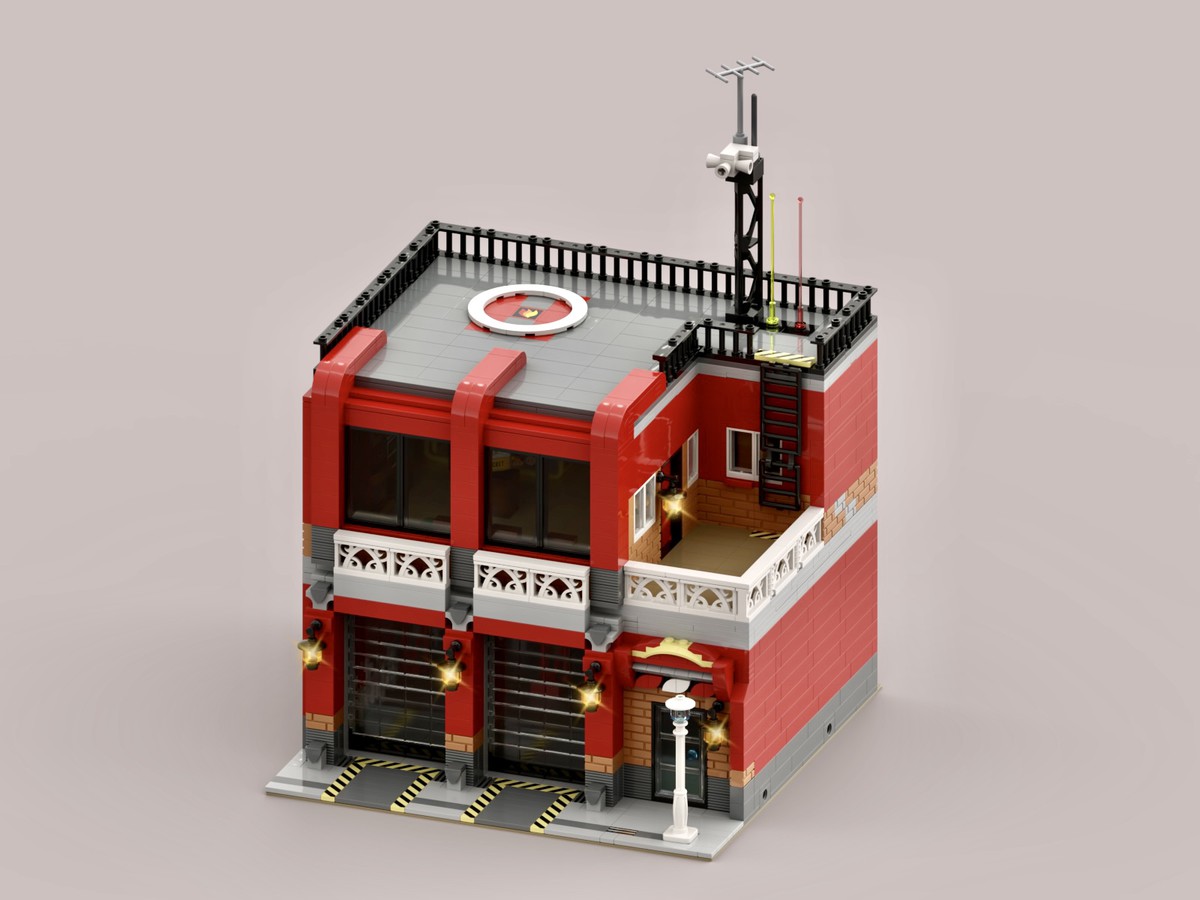 I think this is definitely an idea LEGO has yet to offer, a modular or two based on the emergency services. How great would it be to have an official modular Hospital, Police Station, and of course a Fire Station!

This is where the design by Cristhoper_dh (a.k.a The Pile Of Bricks on Instagram) comes in. He has produced, via Stud.io, a fully fledged Fire Station Modular.

The two story building sits proud with its red brick exterior and classic fire station embellishments. Pull down shutters for each driveway entrance, pavement caution markings, and Helicopter landing pad on the roof. 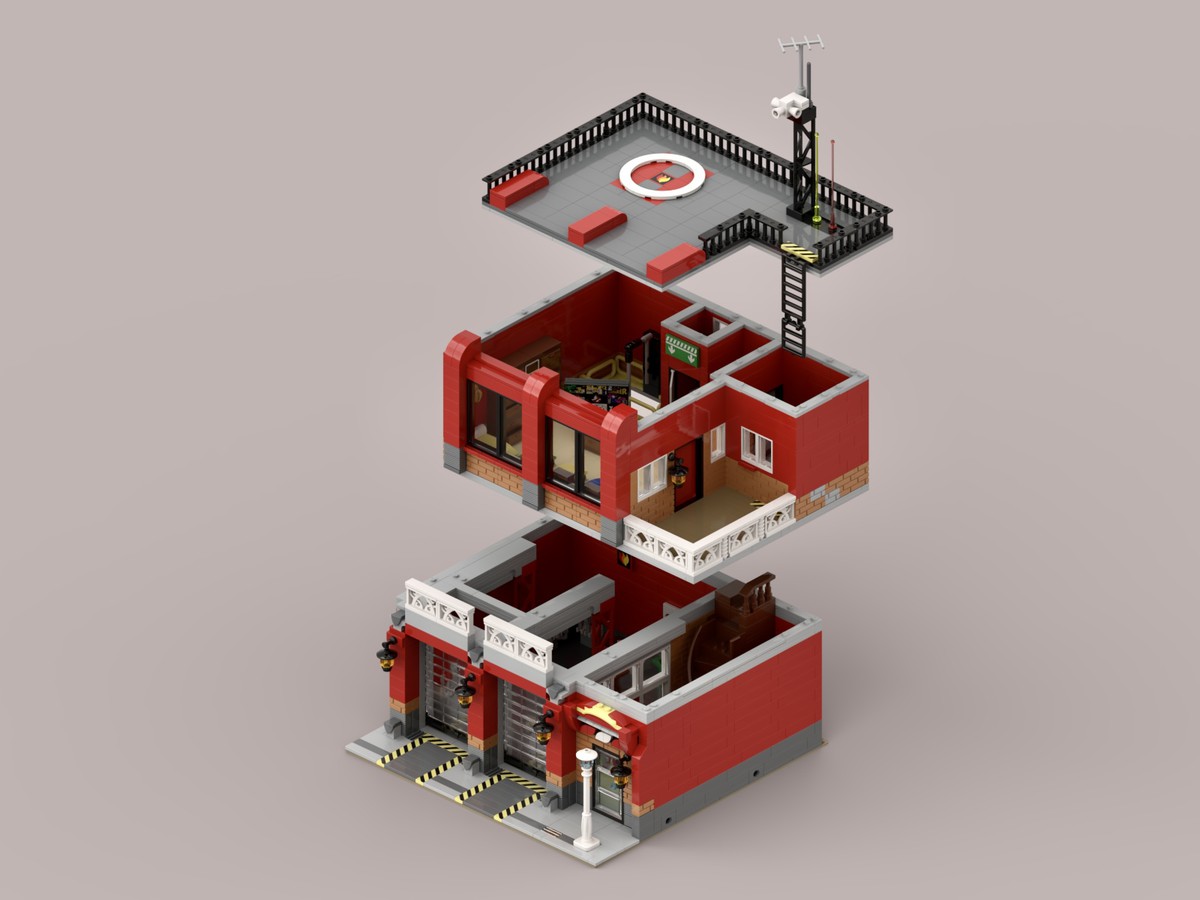 Let’s start with the ground floor, where the two Fire Engines are housed, although there isn’t any engines included in the creators original submission perhaps an update may introduce one as a side build.

The interior looks very minimalistic at first glance but the more you look the more detail you see. For instance there are tools situated around the back and left walls, handy for all kinds of emergencies. Follow the back wall along you come across a small table with a stack of newspapers on it for when the Fire fighters have some down time. Next to that is the rubbish bin with a poster and clock above.

The central puller is coloured red to match the overall theme. I get this is used as a support beam/structure but it fits so well and doesn’t look out of place at all. Fire Stations usually have that ‘barebones’ industrial look about them, and this just adds to that. 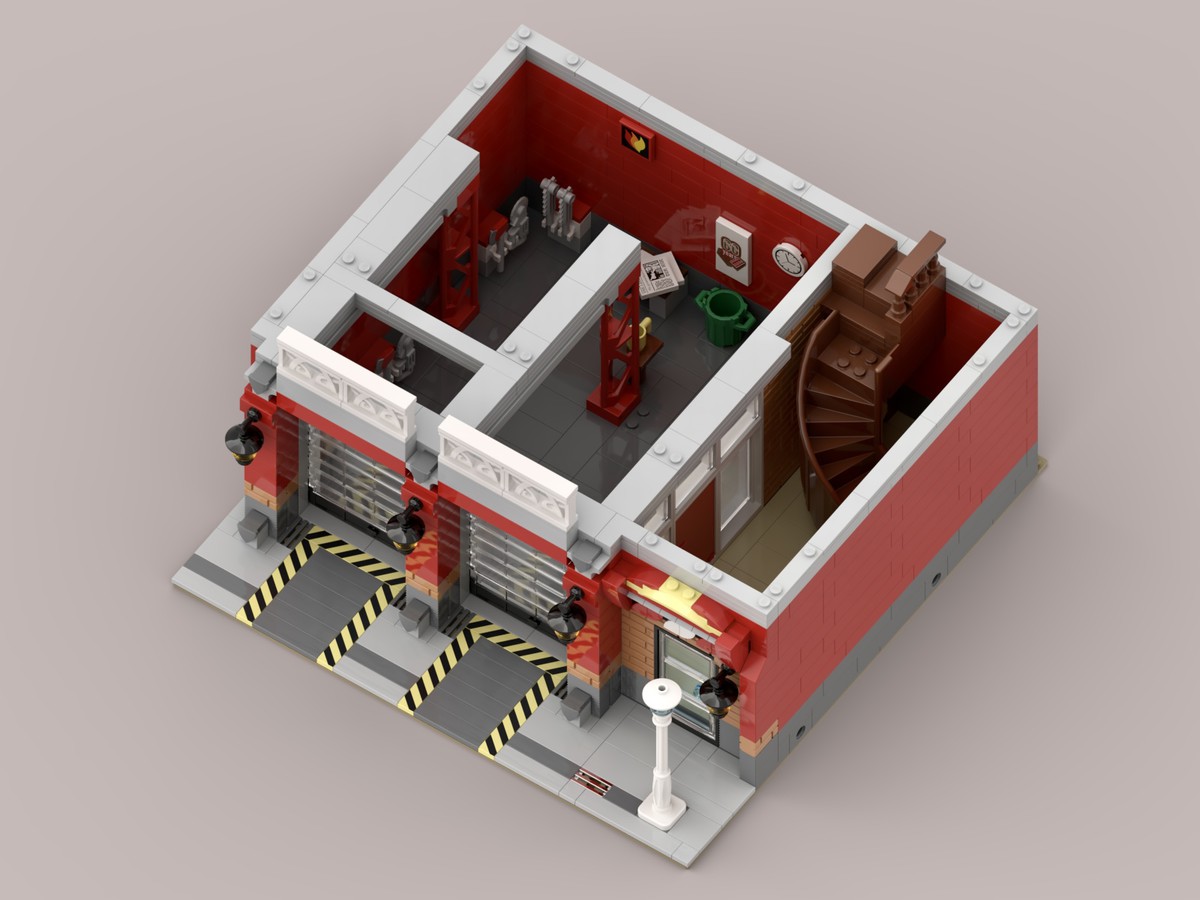 Head through the glass door on the right, along the hallway and up the classic spiral stairs to the first floor.

This is where the fire fighters relax and get some much need rest before their next unexpected mission. There are four simple beds each with a bedside cabinet. In front is a very large flat screen TV, it seems to have a lot of channels to choose from!

The next room, the toilet, is one that stands out a lot for me and perhaps other modular builders too, as a room that hardly gets added into official LEGO sets. The amount of apartments and living spaces that don’t have a toilet is astonishing really. I know it’s the simple things that get me but it’s just one of the reasons I like Cristhoper’s design, he hasn’t forgot about the bare necessaries!

Situated next to the toilet is of course the pole, the fire fighters pole. Let’s face it it wouldn’t be one without it right?!

Again i like the way it’s designed, so simple but it looks amazing. The added yellow barriers that surround it are a touch and the caution tile just adds to it.

I wouldn’t like to be caught short whilst using the toilet when the bell rings, just imaging shimmeing down the pole at half-mast, ouch! 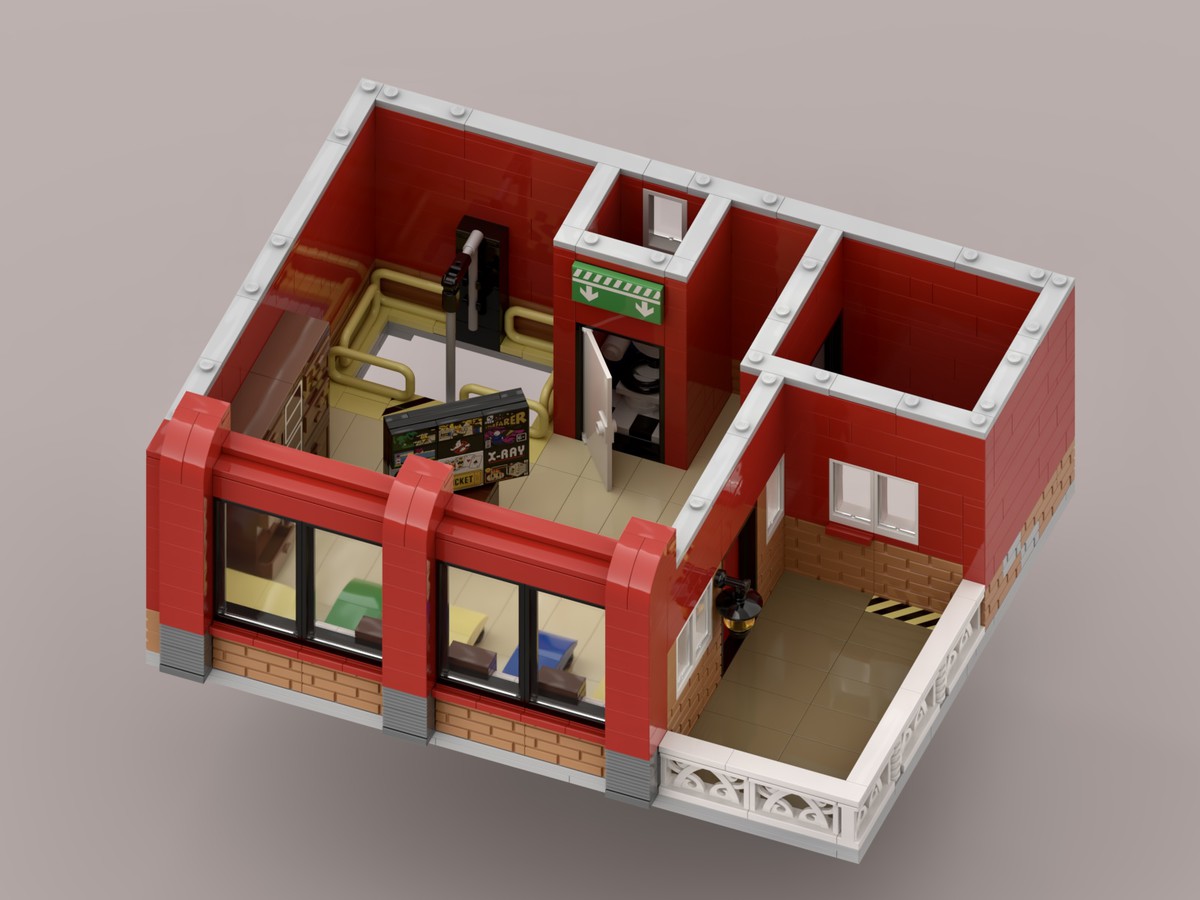 Up on the roof is where you’ll find the Helicopter landing pad and an antenna array.

There isn’t much to look at on the roof, but like I mentioned above perhaps the creator has something lined up in the form of milestone updates. I’d love to see another small build of a Helicopter. As most official LEGO modulars have three stories and the occasional side build, this one could feature two or three vehicular builds. Two fire engines and a Helicopter would be ideal! 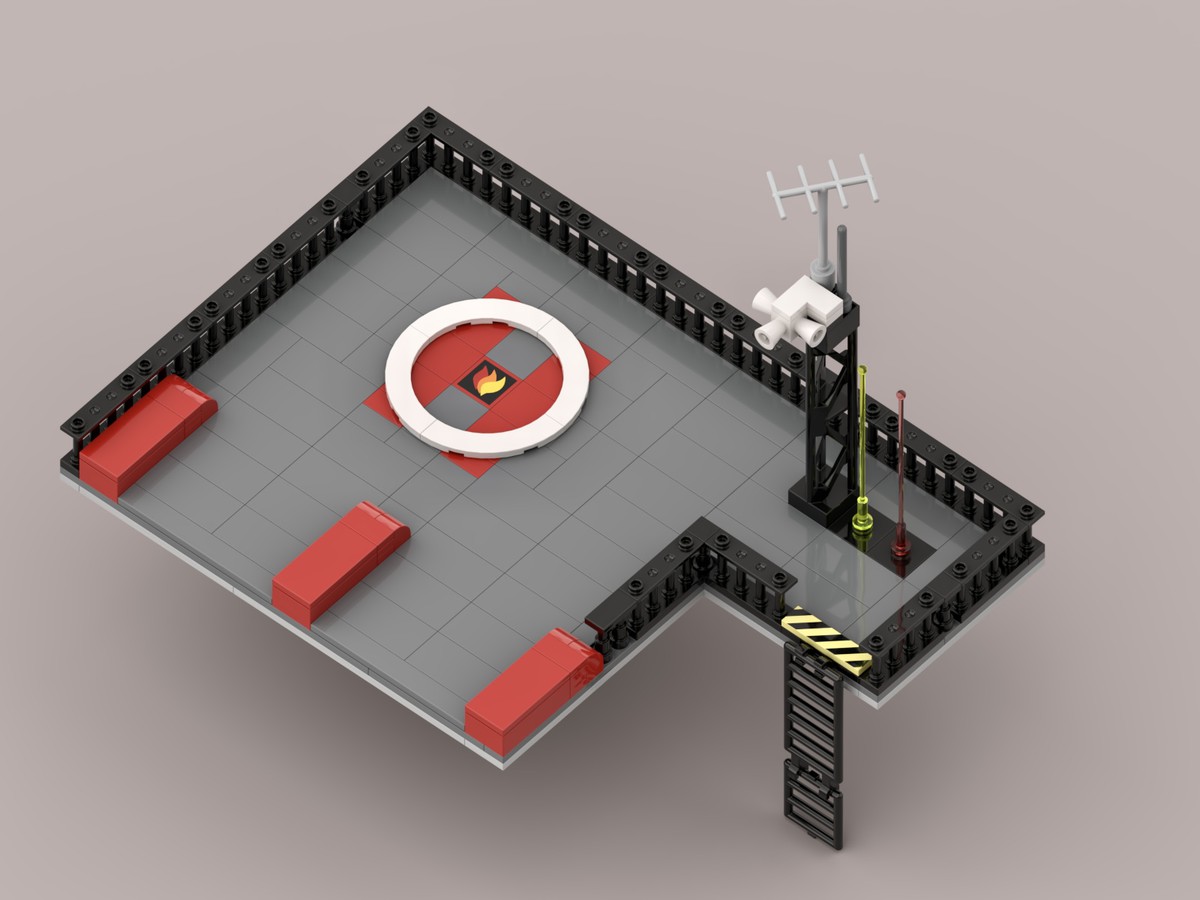 Overall this is a magnificent modular that I would most certainly like to see come to fruition. Cristhoper has done a wonderful job in creating something unique and that every LEGO City needs, an emergency service.

I look forward to following this project through the many LEGO Ideas milestones and one day in the review stages. 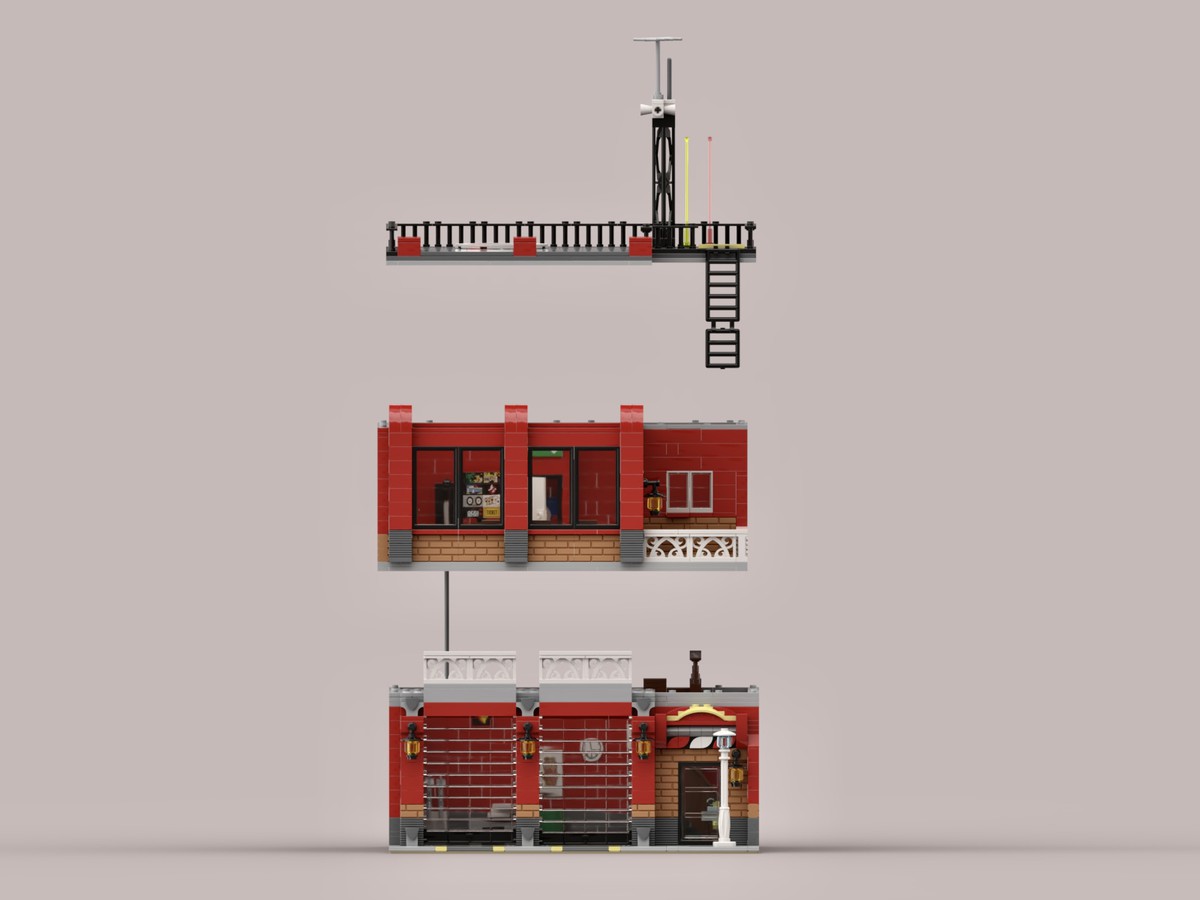 Please head over to the official LEGO Ideas page and support this wonderful project:

Also, why not follow the creator on social media: 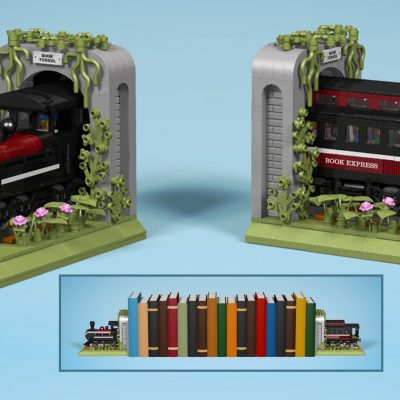 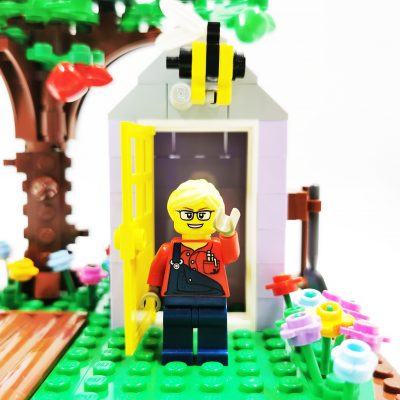