We’re back with another out-of-this-World LEGO Ideas submission by our good friends Aaron and Martin, who also go by the names of CabbageFaceBricks (CFLEGO) and Boom Brickz!

That’s right, it’s a collaboration between two amazing designers with one ultimate goal, to have their names carved in LEGO in the form of an official LEGO set.

They both have a plethora of separate ideas listed on the platform along with another joint effort. You’ll find the link to there towards the end of the article.

Today we’ll be focusing on their latest product idea which again pulls from their love of modern classic film and a scene that everyone has seen in some shape of form, it’s of course E.T. (Extra Terrestrial).

They have transformed perhaps the most iconic scene from the film into LEGO form and it looks absolutely stunning! You may be familiar with the iconic scene from E.T. The Extra Terrestial with Elliot and E.T. Flying through the sky to return E.T. To his home world. E.T. Is one of the most iconic movies of all time!
Aaron & Martin

The scene they have chosen is when Elliott and E.T. are on the run from the Scientists and Police, after splitting up from their friends they enter the forest and come to a cliff edge, E.T. uses the force his powers to fly them both to safety, crossing the Moon in the iconic silhouette shape.

The guys have done an absolutely amazing job, not only have they captured the look of the scene but also the feel of it, you get a real sense of the pair flying through the air and above the trees. I personally am rubbish at making decent looking trees out of LEGO but here the tree on the right looks well designed and built. Having the tree and other greenery parts placed where they are gives the viewer a lot to look at nd makes for a well packed and presented set idea.

The Elliott Minifigure would be a dream to add to the collection and will sit nicely alongside E.T. from the LEGO Dimensions series from many years ago, one I still need to pick up. They’ve stayed true to the scene and given Elliott his red hoody and matching red bike, along with E.T. say in a white basket.

Although it is just E.T.’s head it really does work well, imagine trying to cram an entire Minifigure body into the small box at the front, it just wouldn’t work. Perhaps if/when LEGO make this they’ll include a separate full Minifigure or at least a body. 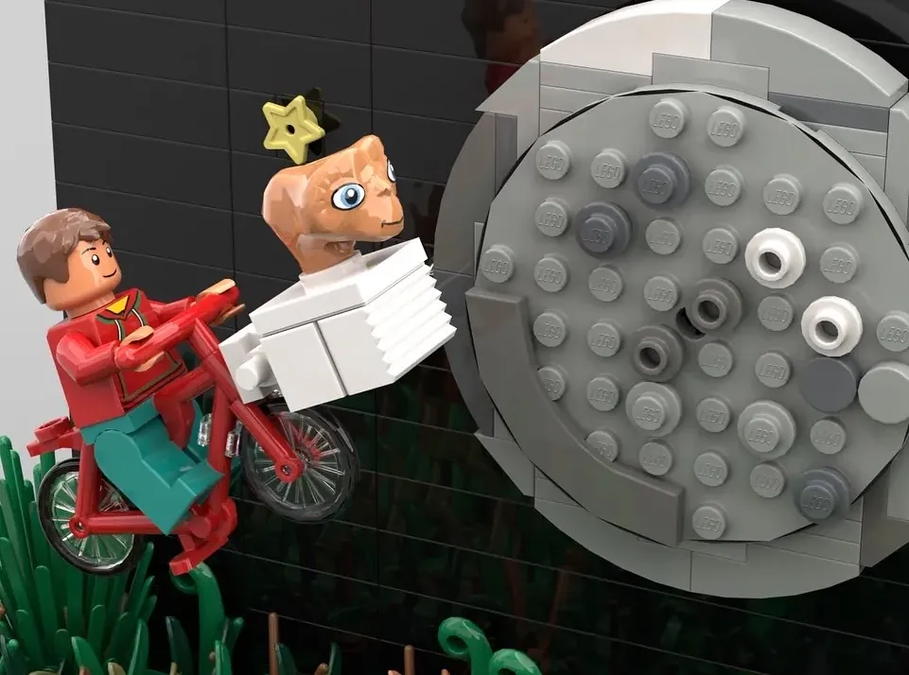 I personally love how they’ve depicted and built the Moon, which is just as important and makes the scene complete. Made entirely from different shades of grey bricks, the Moon actually does look like the Moon!

A giant circular plate is used for the face with several added 1×1 studs to represent craters. To make the whole thing circular they’ve constructed a separate side build and then attached it to the display, using SNOT (studs not on top) and other techniques to make it perfectly round.

The whole diorama aspect is very much in trend at the moment, what with the recent LEGO Star Wars dioramas being released, also what better way if there to display such an iconic scene!

They guys have done an incredible job here once again and we’d like to wish them the best of luck in promoting and gaining the required 10k supporters needed to get this through to the next round.

Please do head over to the official LEGO Ideas page and click that all important Support button!

June 2022 LEGO Releases In A Nutshell!