If you’re a Marvel fan than you’ll know that Disney+ have released the very first episode of What If…?, a brand new animated series which explores the noteworthy events in the Marvel Cinematic Universe and creating a multiverse of infinite possibilities, prime example is today’s LEGO set review – LEGO Marvel What If…? Captain Carter and the Hydra Stomper (76201)! 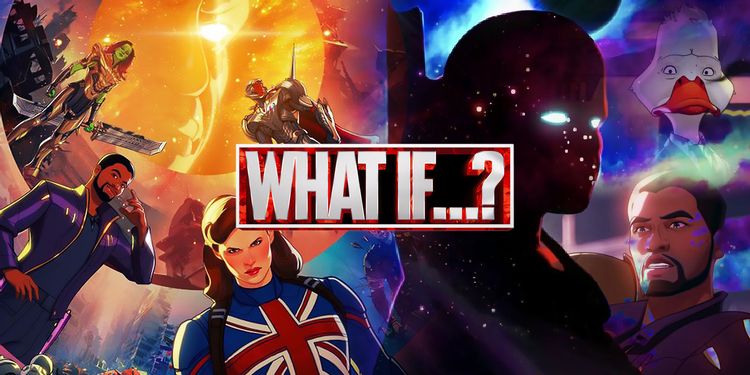 Without giving away any spoilers the first episode asks What If…? Agent Peggy Carter became the Super Soldier instead of Steve Rogers. It actually makes for an enjoyable watch and goes onto show how she tackles Red Skull and ultimately ends up in the Present Day.

The new set released by LEGO takes key elements from the show, not just with the Minifigures but the Hydra Stomper Mech too!

The art on the box is beautiful, as always, and depicts Captain Carter and the Hydra Stomper in action, trying to apprehend Red Skull who has run away with the Tesseract. 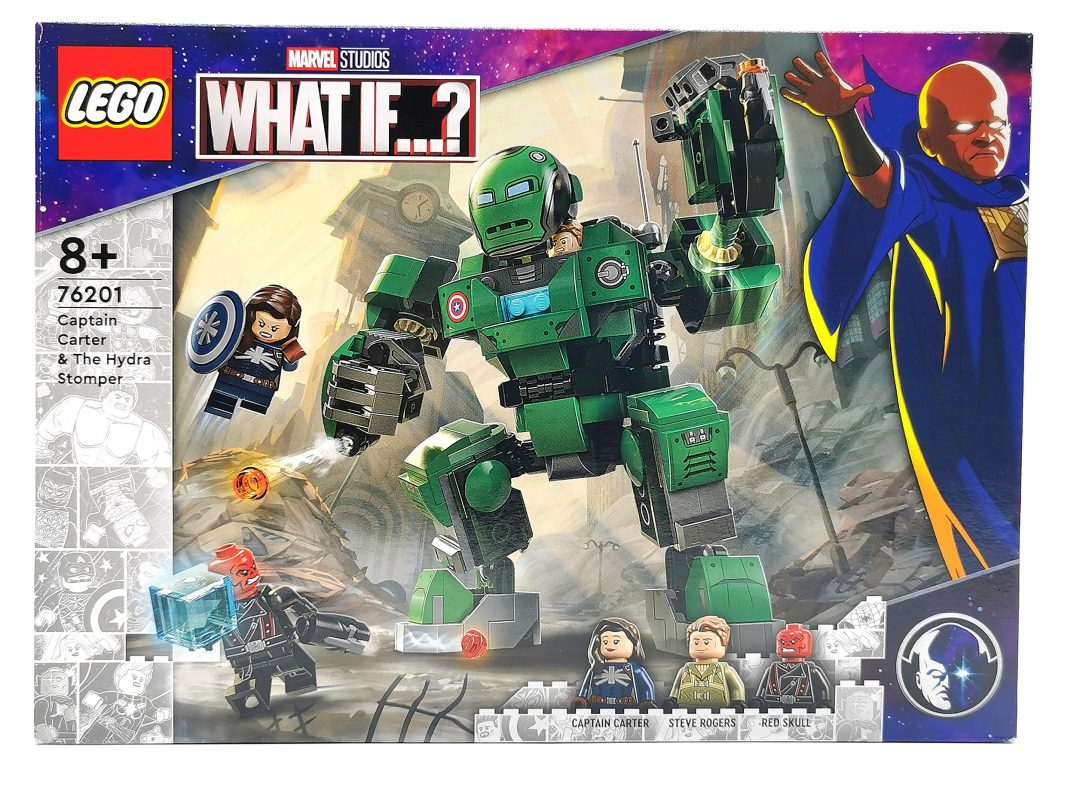 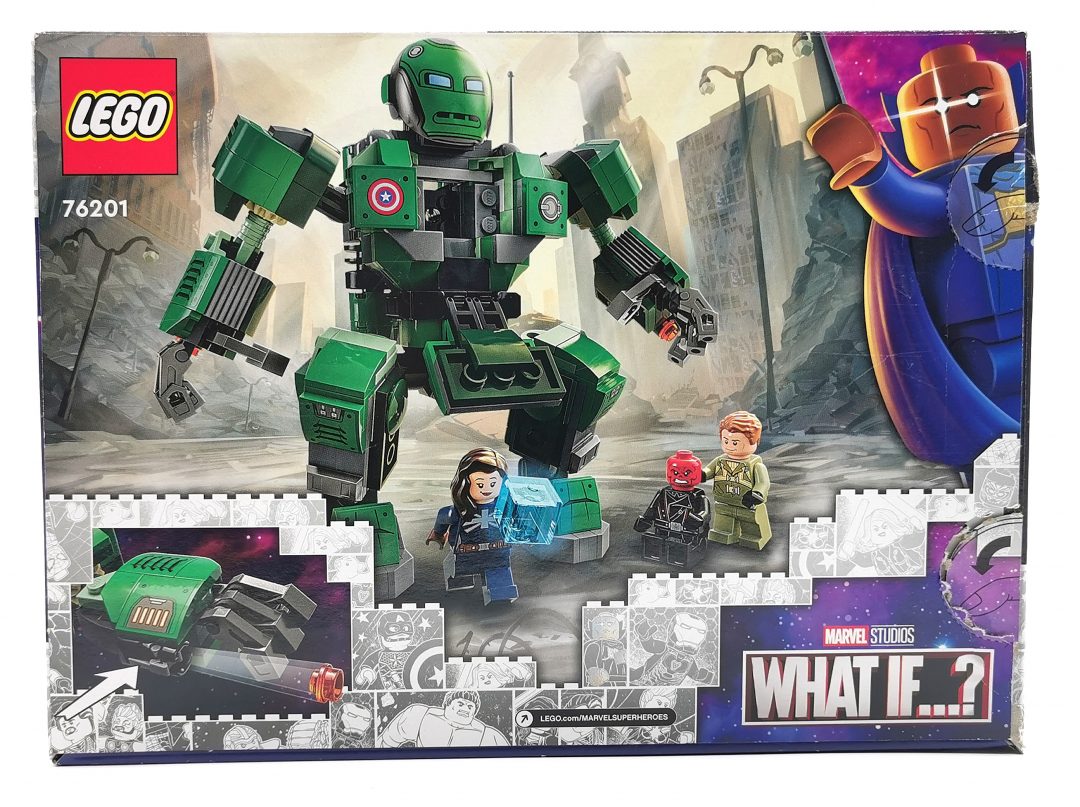 On the back we see that they have caught up with him and recovered the Tesseract, we also see the Hydra Stomper open and the cockpit is on show.

As with other recent LEGO Marvel sets we see the main branding, in this case What If…?, plastered all over the box, along with a character called The Watcher, both in cartoon and LEGO form.

We also have 3 numbered bags, an instruction manual that features the same cover art, and the sticker sheet which has 9 individual designs but 12 in total.

The main build is the Hydra Stomper Mech itself which I must admit has grown on me since watching it in action in the very first Disney+ What If…? episode. 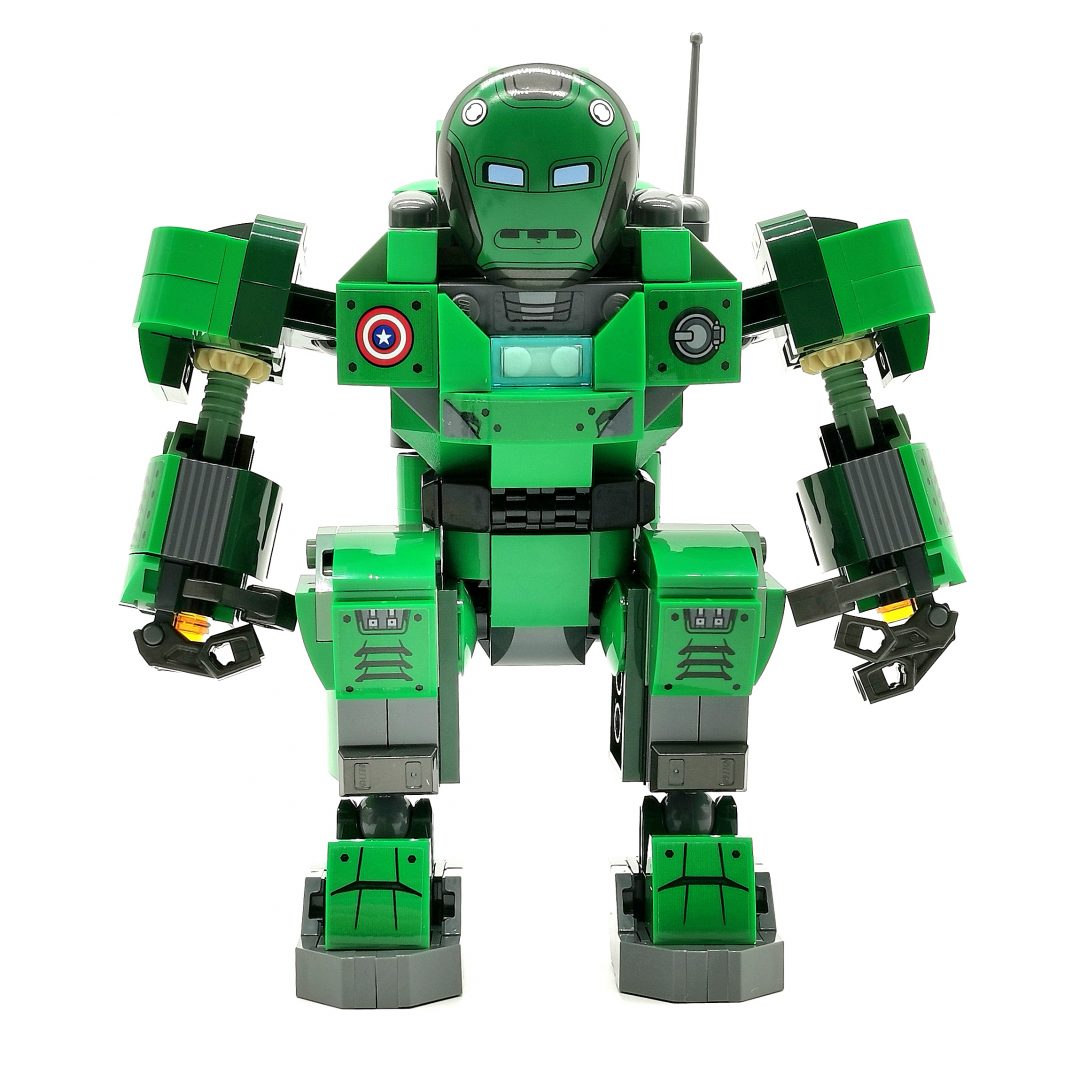 ‘I think I’m friends with that Hydra Stomper!?!’

Being made mostly from green parts and featuring basic technology from World War II, the Mech does look pretty good and fits in with the are well. Its bulky exterior and matching arms, legs, and Helmet look almost identical to Tony Stark’s Mk1 armour from when he first became Iron Man. 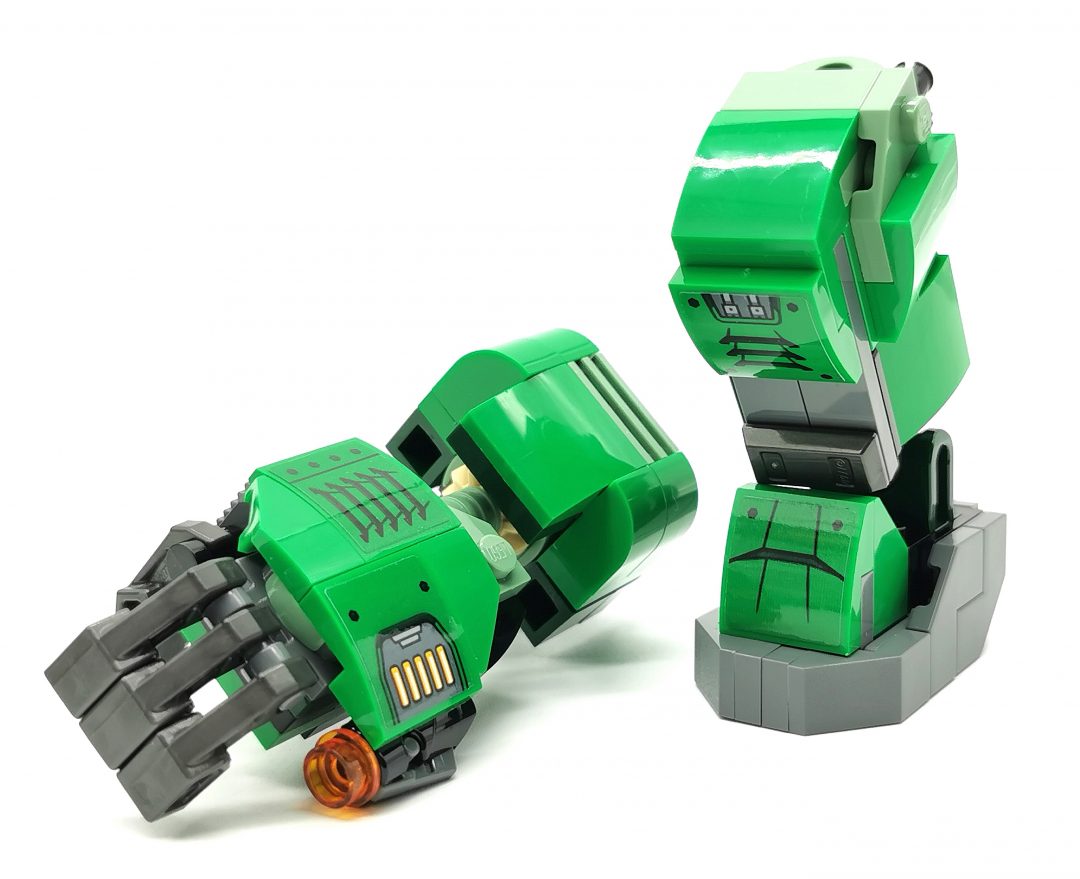 An arm and a leg!

This is also where all the stickers are placed, being the only build in the set of course. Again as I mention in most of my reviews printed pieces would indeed be better, but as we all know in a set of this price (£27.99) that’s very unlikely to happen.

The cockpit opens up nd allows you to pop the Steve Rogers Minifigure inside. It is very similar with previous Mechs of this scale, most notably LEGO Marvel War Machine Buster (76124). Its also taken a technique from the smaller £8.99 Mechs (Thor, Captain America, Iron Man, Thanos etc) in the form of how the Minifigure stands securely inside, with the aid of a modified 1×2 piece which has a central divider. 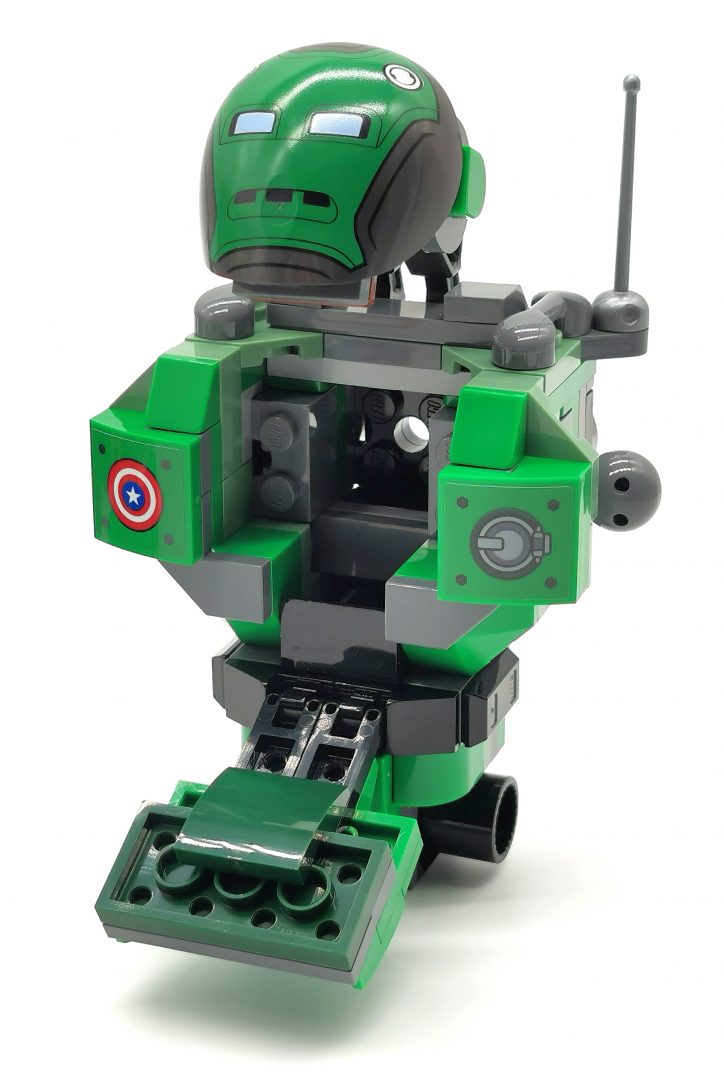 I particularly like the Hydra Stomper’s Helmet and that it is once specially moulded piece, and printed!

The design and print job for both the helmet and stickers is top notch and done to LEGO high standards. The only one grumble I have is where the mould connection point is on the helmet, slap bang in the centre of the mouth grille, you can clearly see it and takes away from the model overall. 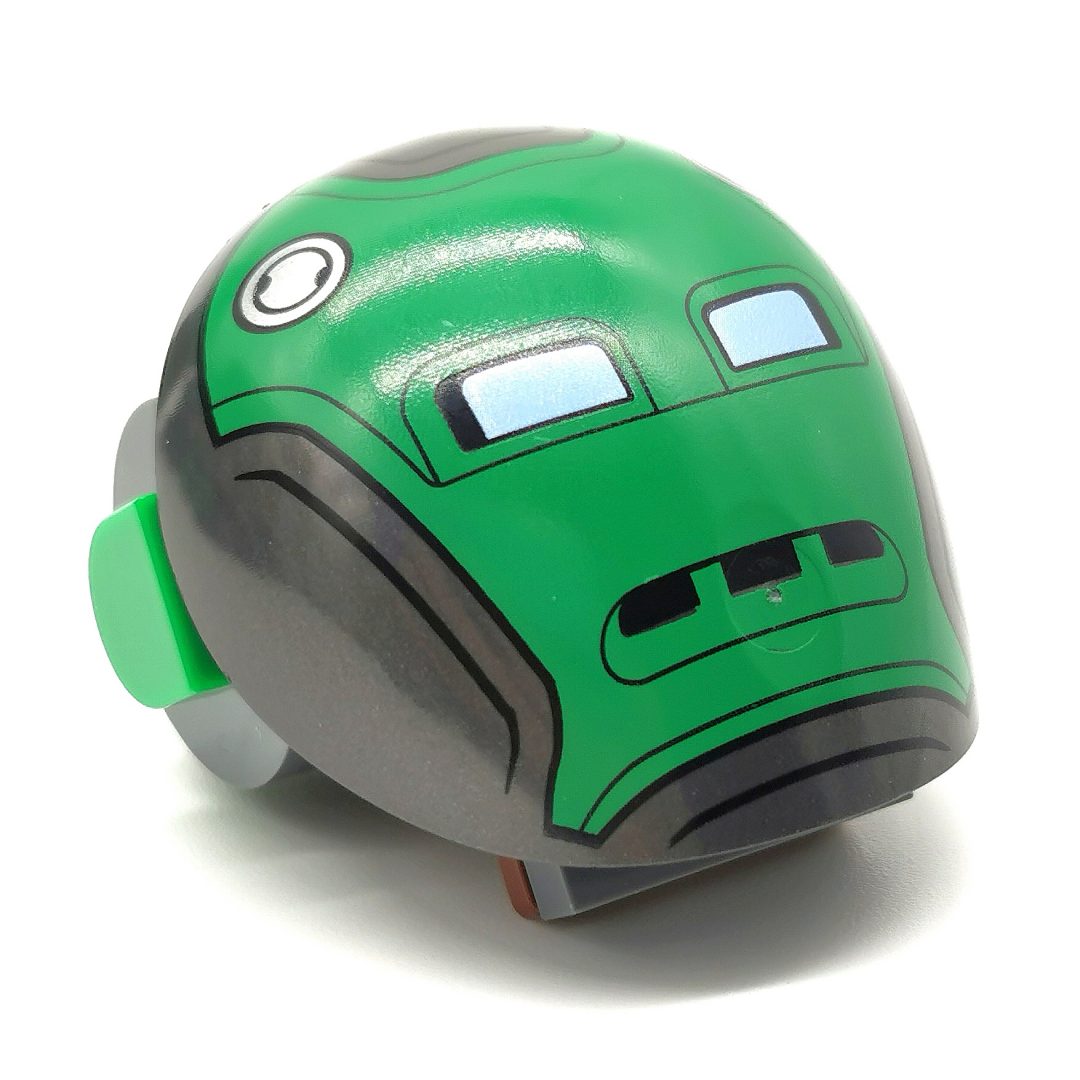 This is where the set really comes alive, the three exclusive Minifigures – Captain Carter, Steve Rogers, and Red Skull! 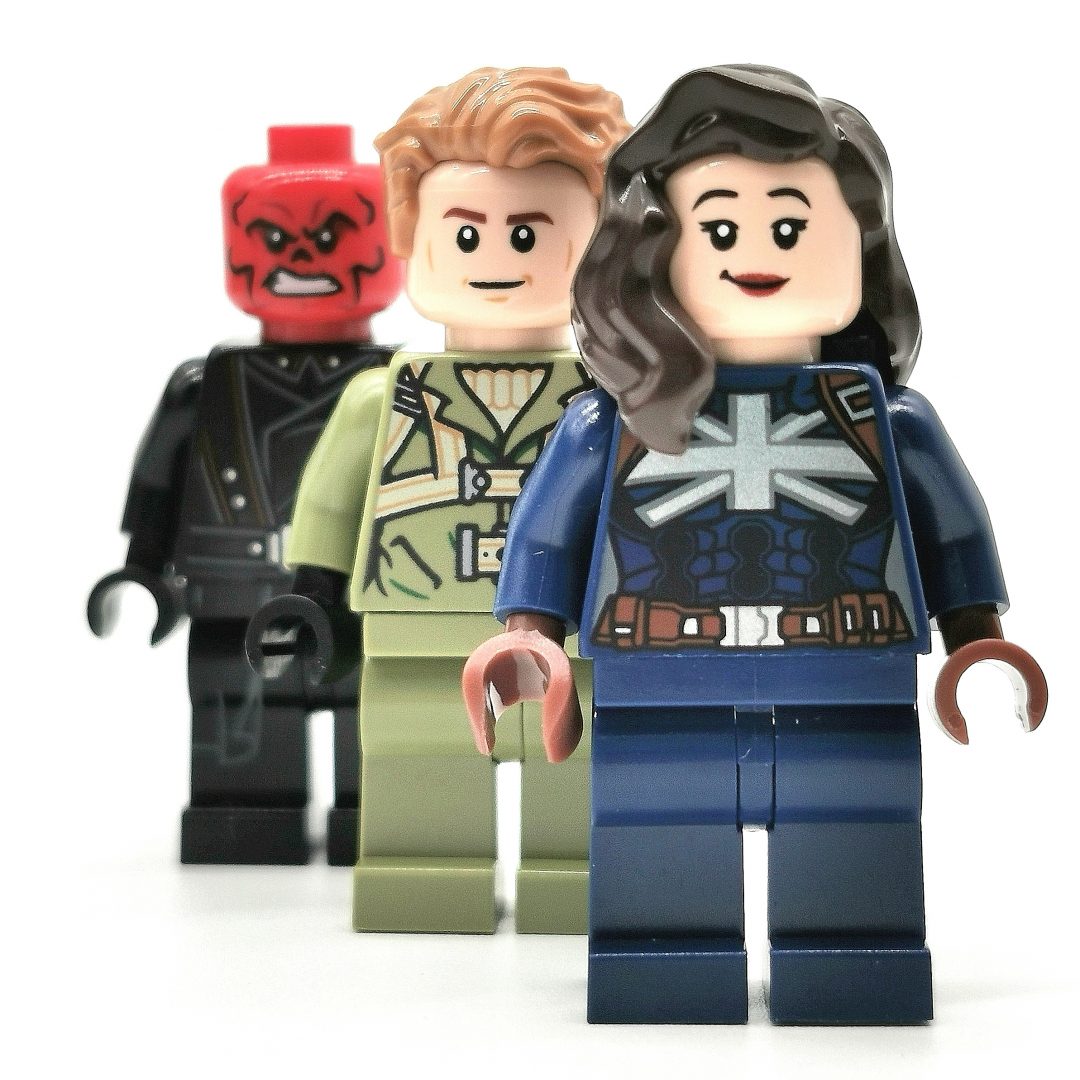 All the Minifigures have great printing on them although Captain Carter is lacking in the colour department most notably the Union Jack has lost its Red, White, and Blue. For me that was what made her costume complete, she’s British after all and having the flag in full colour is necessary and right. I guess we’ll just have to wait for the CMF (Collectable Minifigure) version of her!

Apart from that small gripe I am pretty pleased with her, she comes with an alternate face which happens to be her Hydra bashing expression, and her trusty Shield, that happens to fall under the same colour issues as her outfit, So I won’t go there again. 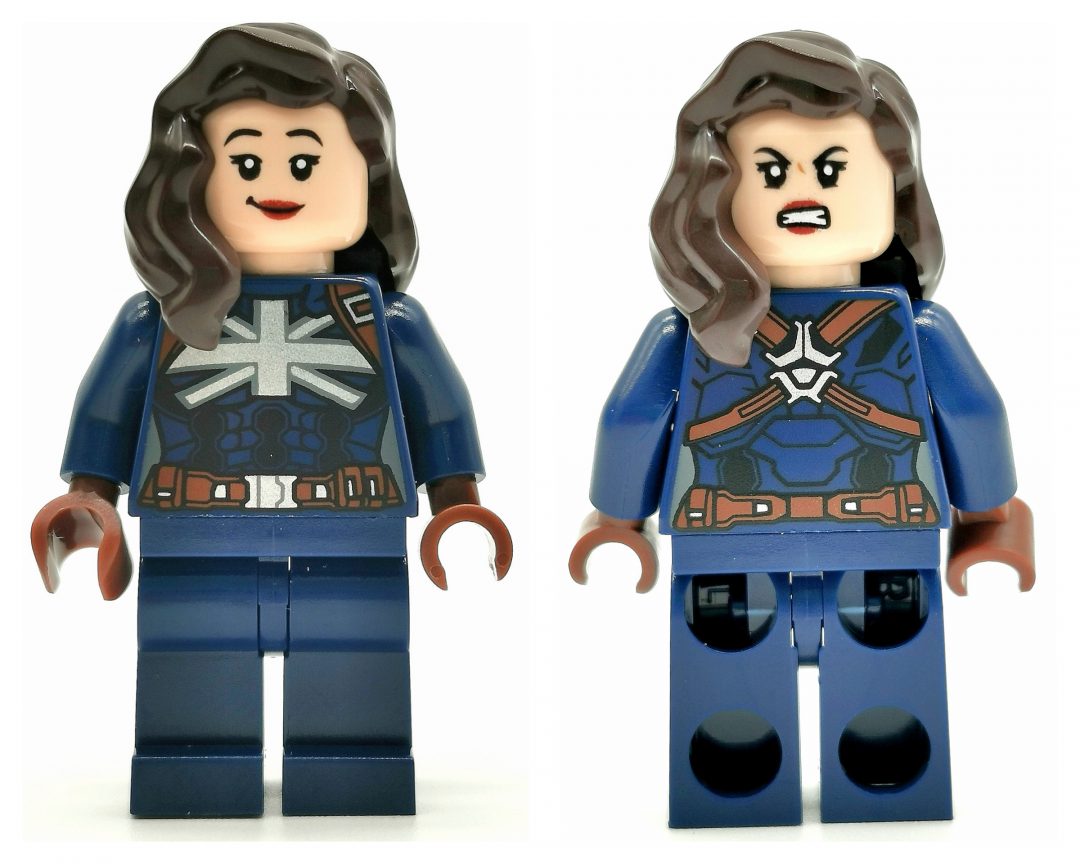 Steve Rogers may look a little different to how we’ve seen him in other sets, for one this is the first time we’ve had the character at all and as we all know he’s usually in his Captain America outfit.

That’s the potential Marvel’s What If…? series has on the LEGO World, it will give us alternative character Minifigures, which is really exciting!

He is dressed in somesort of generic Army outfit which is quite unusual for LEGO with their whole no ‘military/war‘ policy. I don’t mind it though as it’s great for MOCs, creating War scenes etc especially for Paratroopers.

He sports a very cool backpack which is most likely a parachute which he can use if the Hydra Stomper runs out of fuel. The detail in the torso is actually really good and looks crisp and highly detailed, they’ve also included an alternative face. 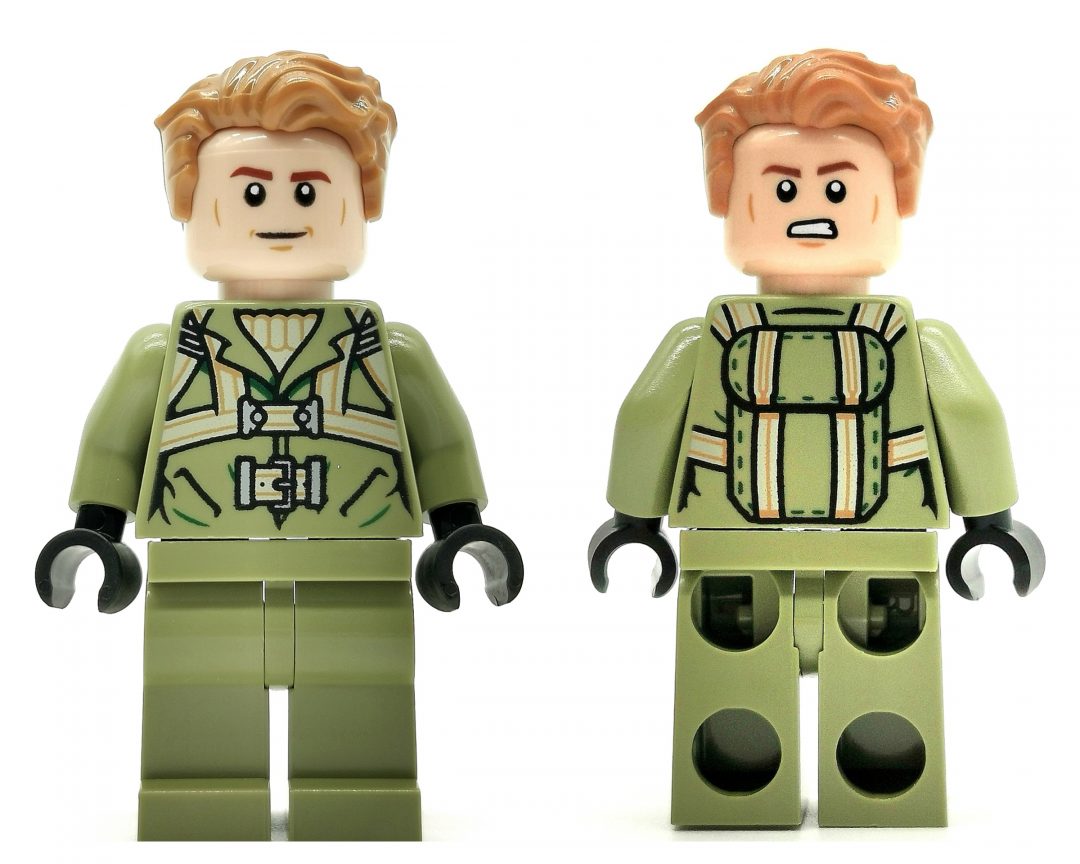 Red Skull is again an exclusive Minifigure to the set, all three are to be exact, and this makes the set awhole lot more desirable. I’ve checked Bricklink and found that there are in fact four sets that include a Red Skull Minifigure and they’re all different, although one is from those rather strange and wacky LEGO Mighty Micro sets.

From the back you could easily mistake the torso for Darth Maul, it’s got that Sith vibe to it with the black fabric and red highlights. On the front we can clearly see it’s some sort of leather jacket and the Hydra logo in his belt also gives it away. We do get some leg printing, although it’s the only Minifigure to include it, he’s also lacking an alternative face but that’s due to him not having a hair piece to cover the back. 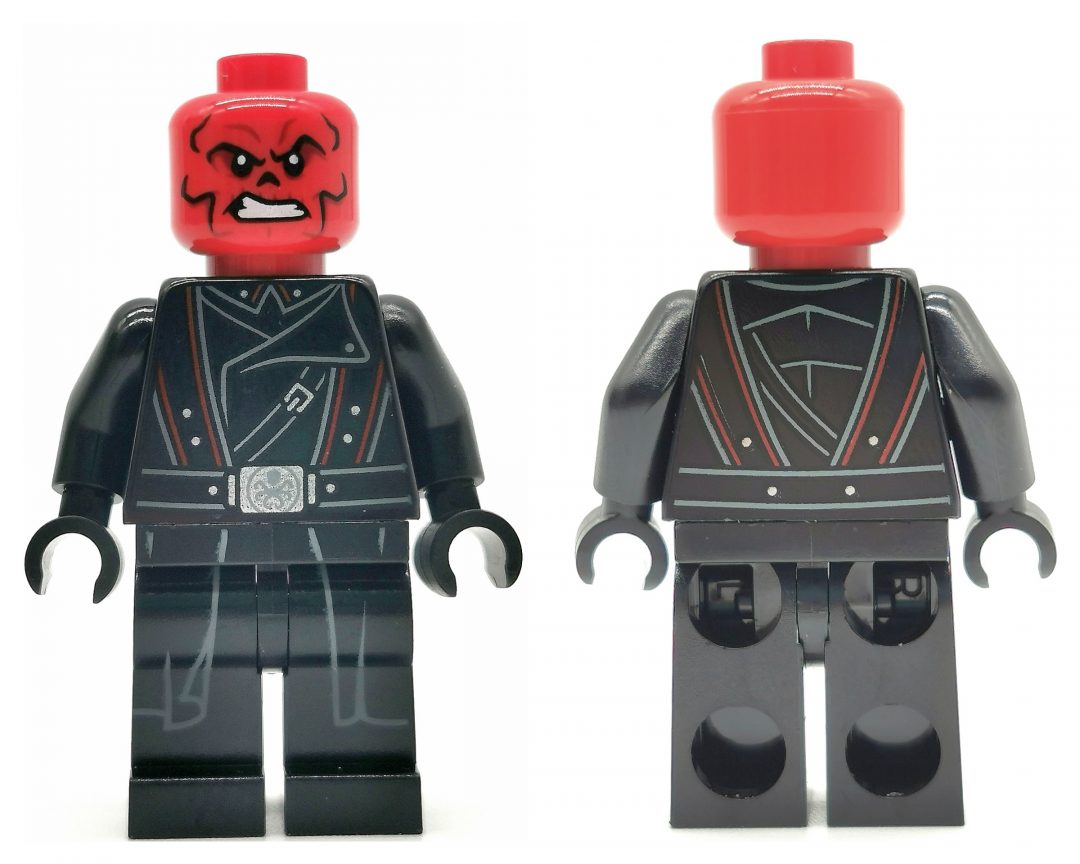 Overall both the build and Minifigures are great, but there is definitely room for improvement in some places.

The main Hydra Stomper build is actually pretty decent and does resemble it’s onscreen counterpart well. The inclusion of stickers isn’t ideal but I do understand it’s down to the cost and size of the set. Army green works well as the base colour and obviously fits into the whole World War II setting, it also looks bulky and robust as the technology at the time was limited.

All three Minifigures are exclusive and worthy of collecting, take. Away the colour issues of Captain Carter and you have yourself three very cool Minifigures that not only represent the characters well but also look good, with the design and printing being too notch.

For the price of £27.99 it is a little on the expensive side and you may find that the build is lacking a little, we should take into account the licensing fees etc and the three exclusive Minifigures, so it doesn’t seem as bad.

We do highly recommen it though, based on the Minifigures alone, it’s the first outing for Captain Carter, until 1st September when the Marvel CMF releases, so I brace the Minifigures and set and we can all expand upon it as time goes on. 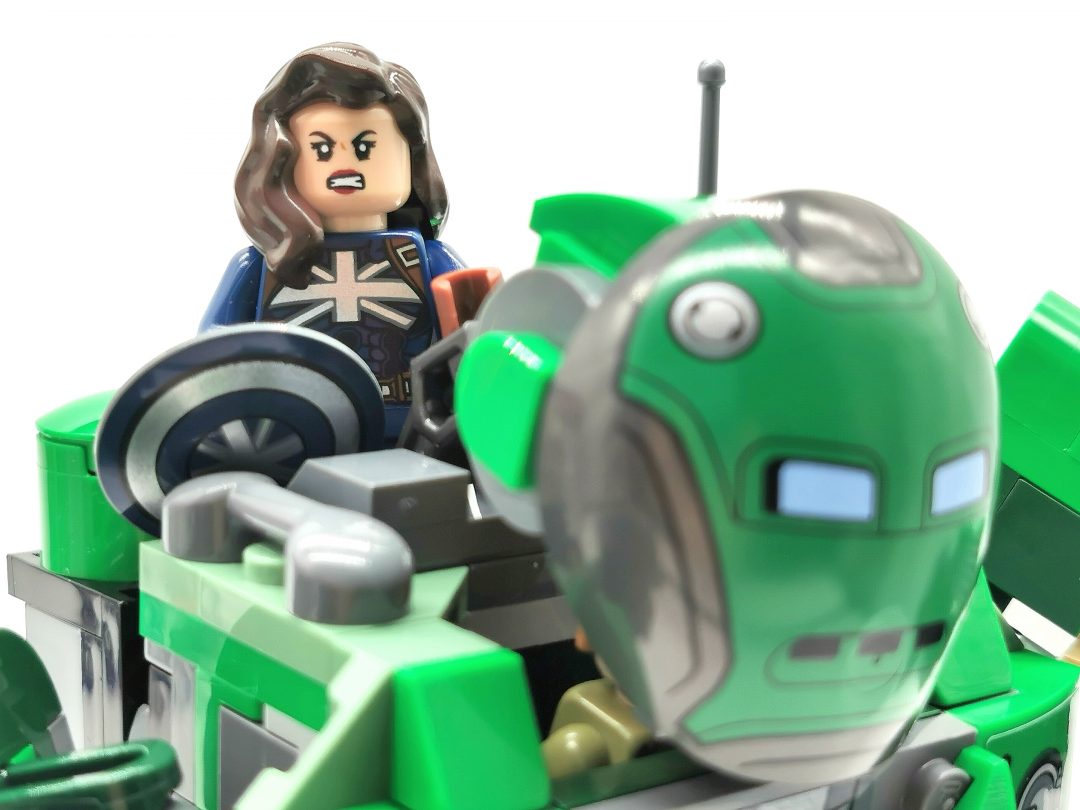 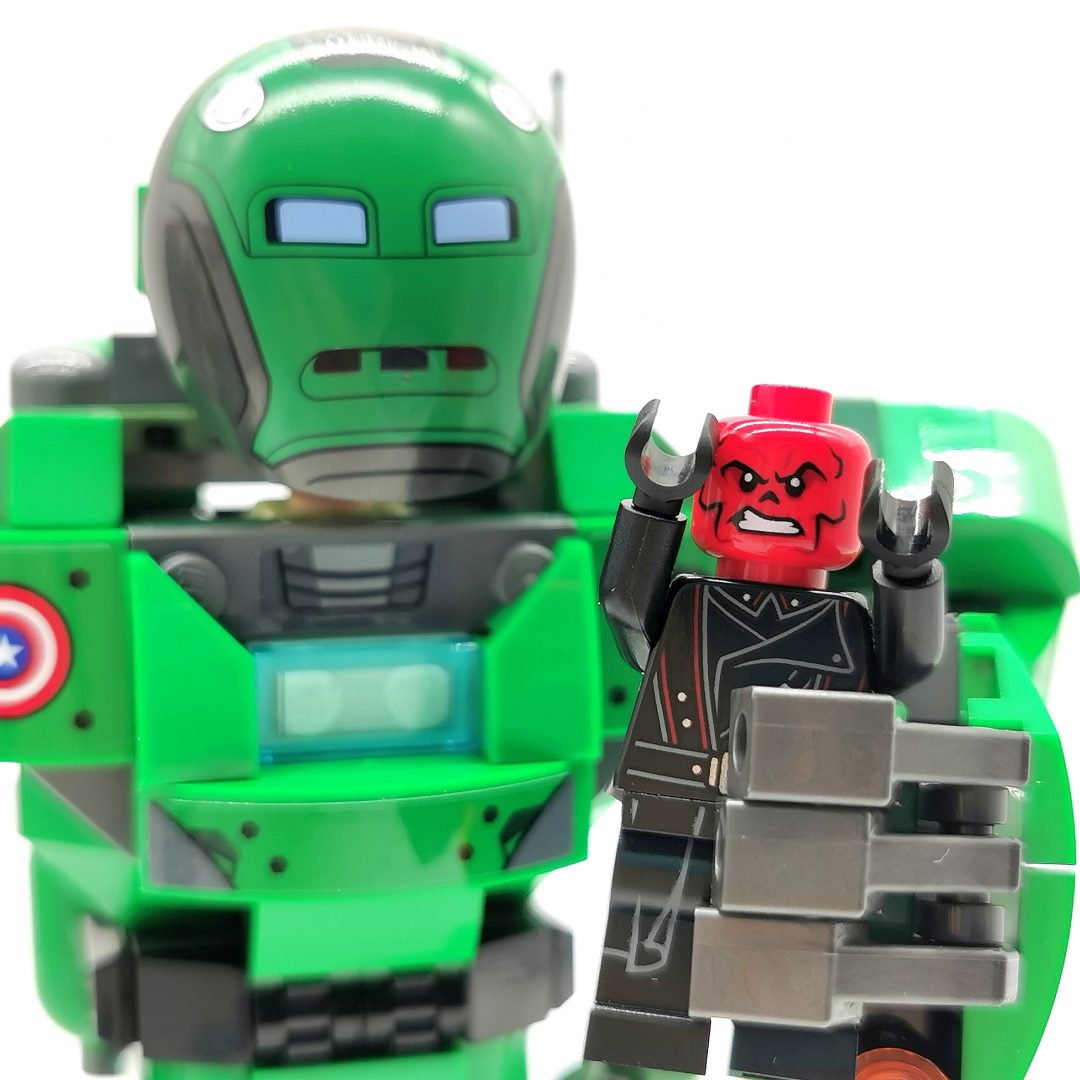 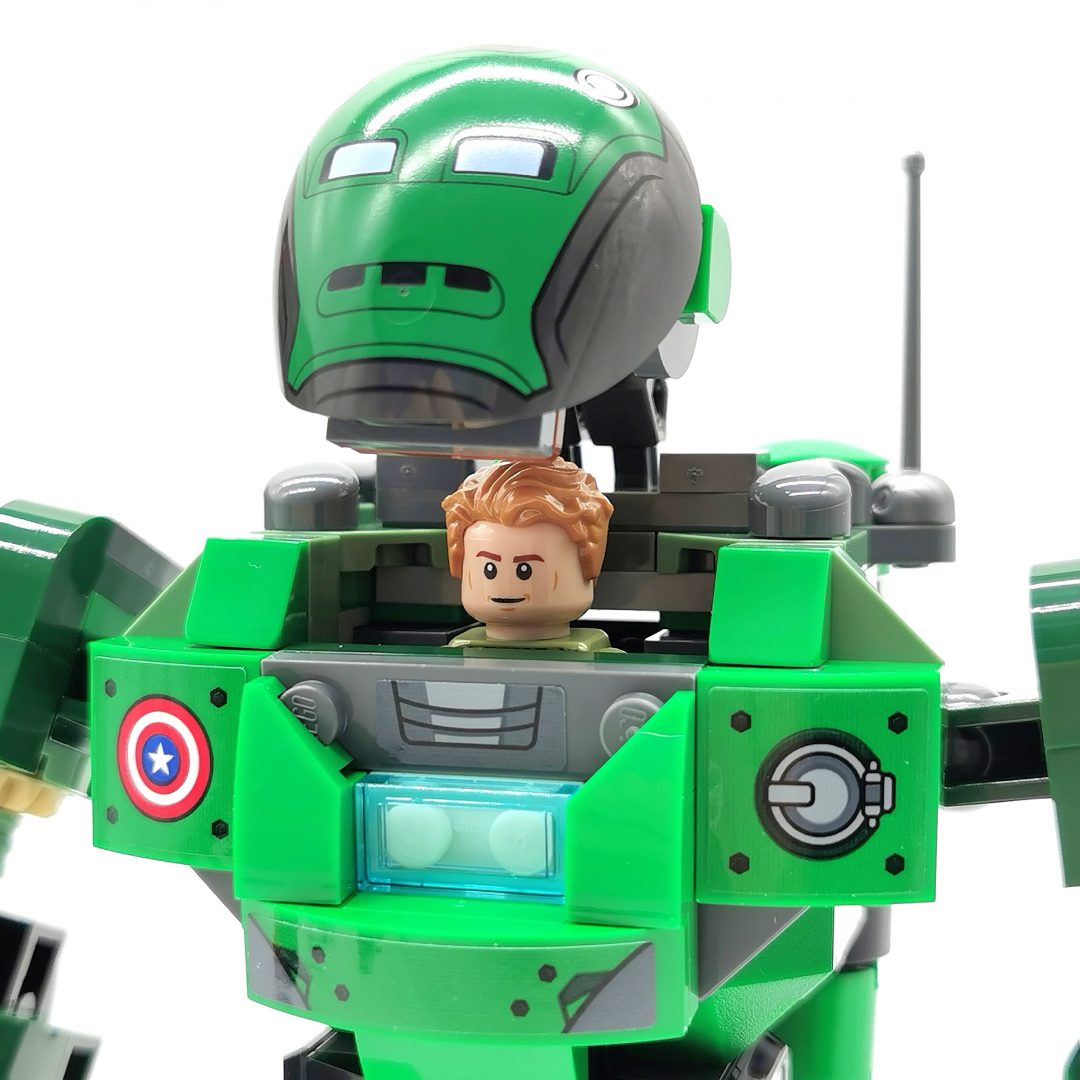 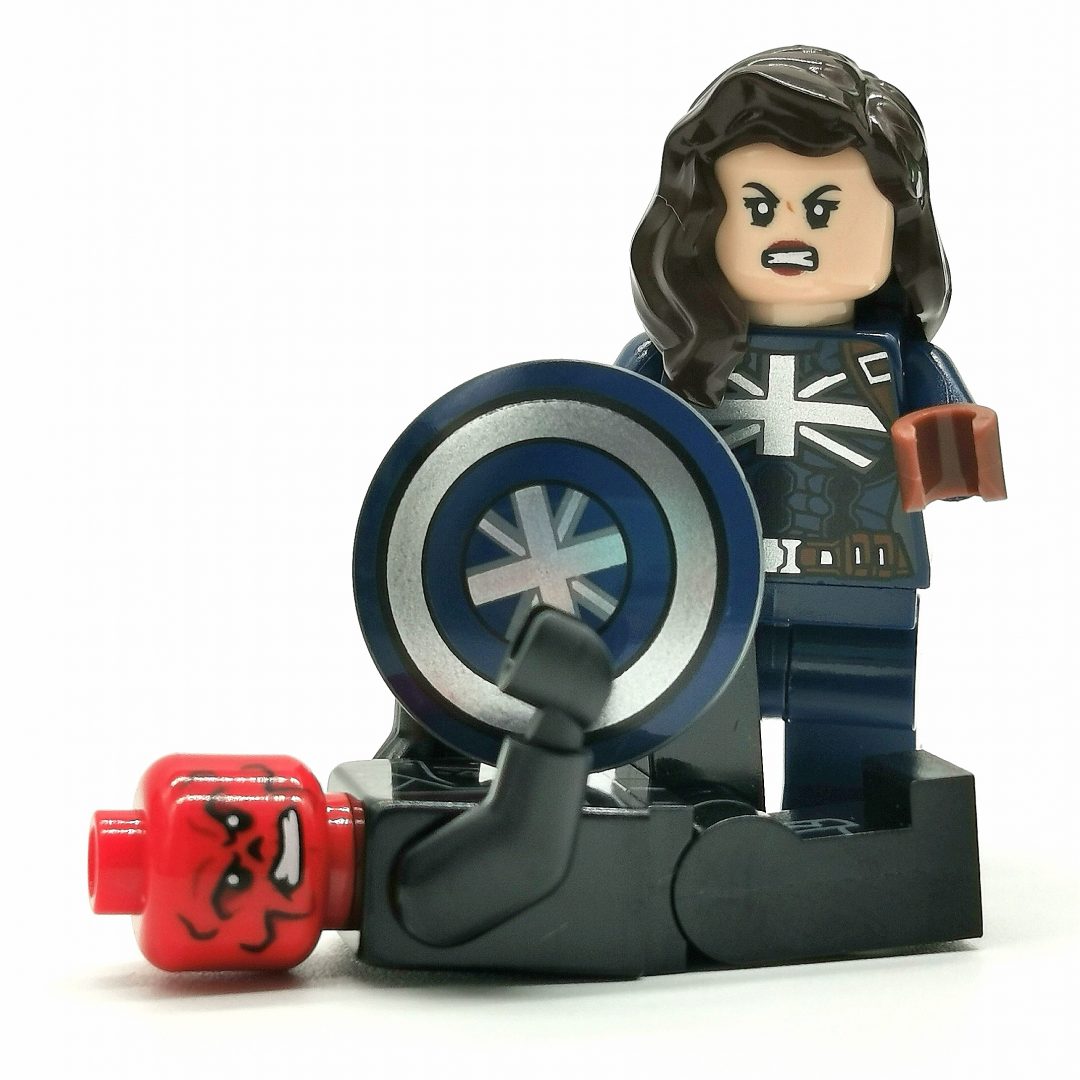 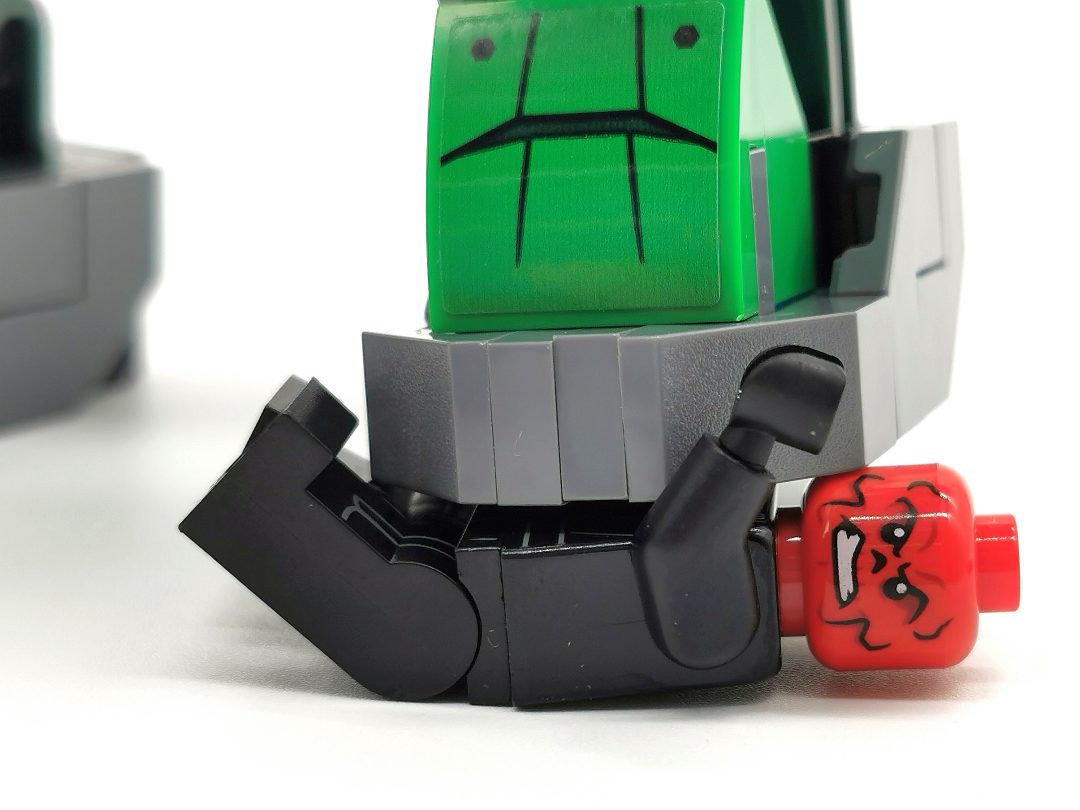 Does what it says on the tin!

Thank you for reading our review of the new LEGO Marvel What If…? Captain Carter and the Hydra Stomper (76201), we hope you enjoyed it. Please let us know in the comments below any thoughts or questions you may have about the set, we’re happy to help! 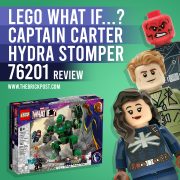 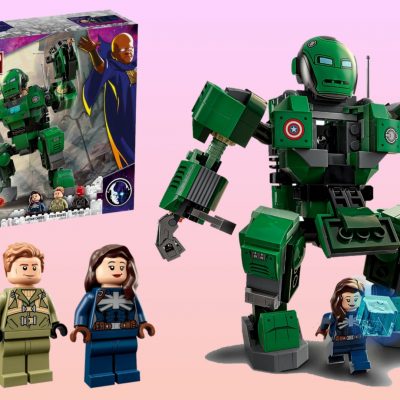