If you’re a follower of ours over on Instagram then you’ll have hopefully seen one of our live build streams. Ever since Marvel’s What If…? started on Disney+ we’ve streamed a LEGO Marvel related build, the first two were LEGO Marvel What If…? Captain Carter and the Hydra Stomper (76201) and LEGO Marvel What If…? Sakaarian Iron Man (76194), both of which me and Boom Brickz reviewed recently (links above).

So far they have been Mech oriented builds, with this third set keeping the trend, in the form of LEGO Marval Iron Man Iron Monger Mayhem (76190)!

Without further a-do here is our review… 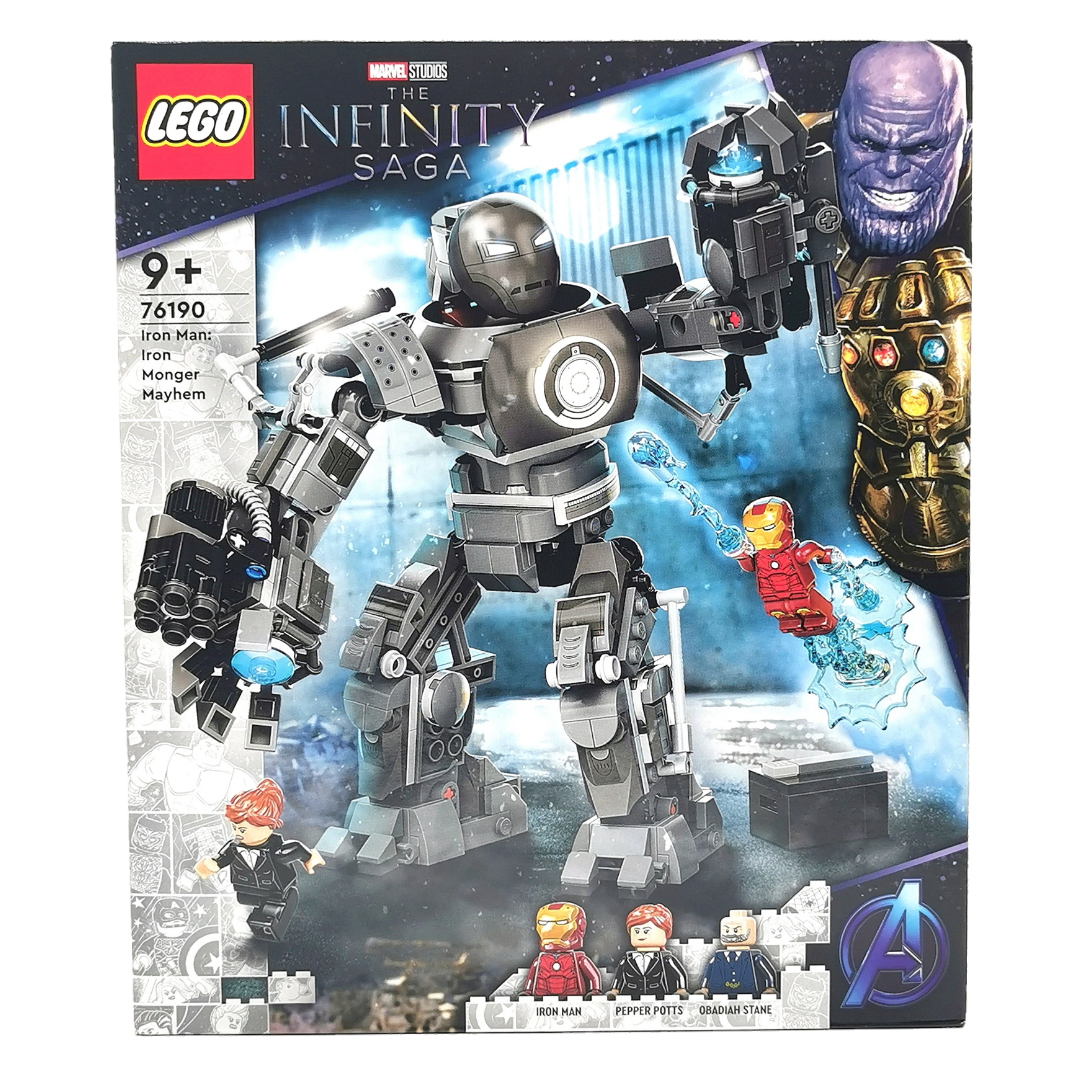 LEGO have certainly stepped up their box design game with this wave of LEGO Marvel Infinity Saga sets. They’re jammed packed with cool colours, set info, and action pieces with the Minifigures and Mech in different poses.

What I really like about this wave is the ‘real’ Thanos & Gauntlet on one said and the LEGO version on the other, it’s such an awesome comparison to make. The LEGO What If…? are the same but with The Watcher. 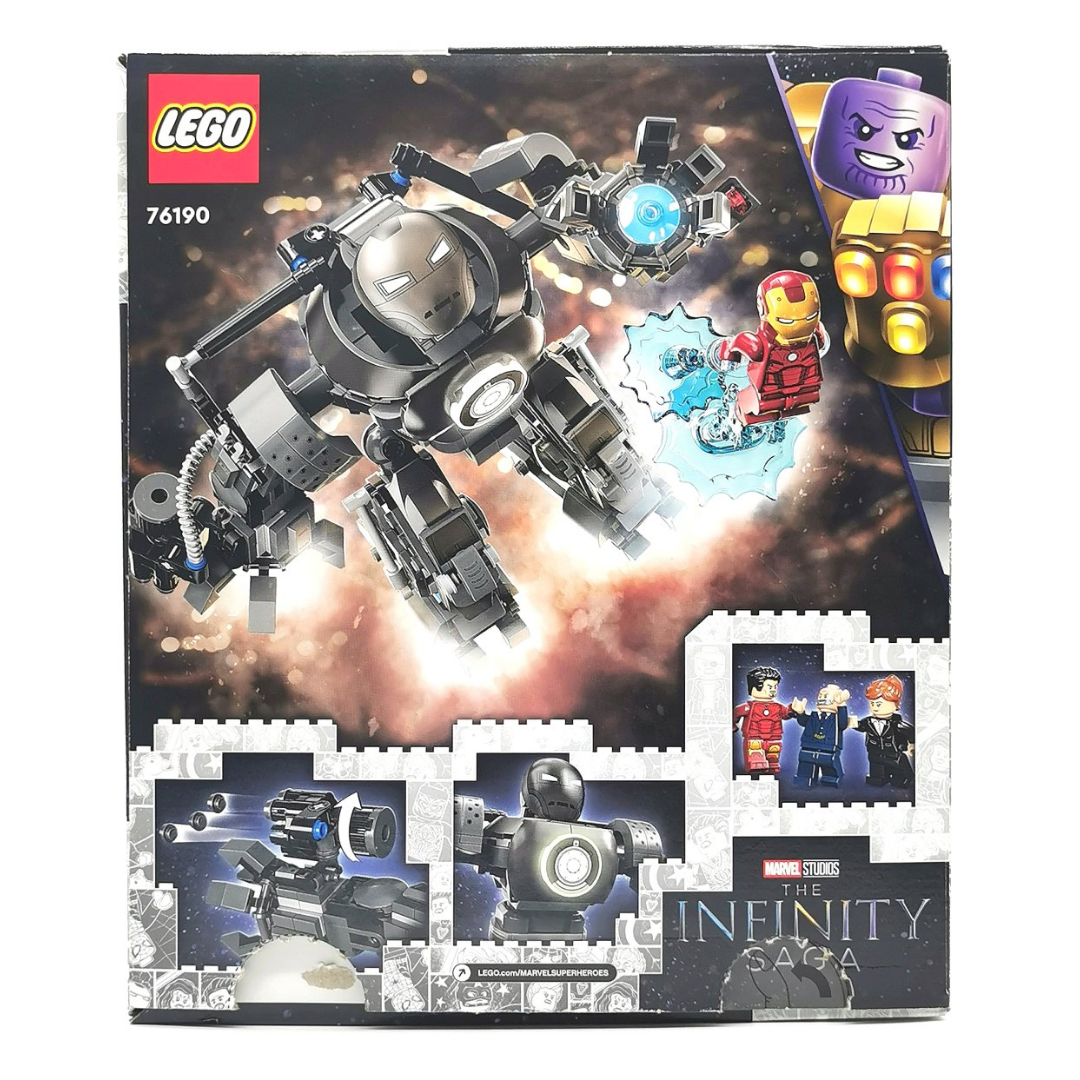 I’m very impressed with the movie scene recreation on the back of the box. It’s taken straight from the original Iron Man movie that released way back in 2008, and features Obadiah Stane‘s Iron Monger Mech chasing after Tony Stark in an Iron Man suit, just before Obadiah realises it’s too late and his thrusters freeze up!

Ripping open the box and the bags during the Instagram live build I sadly forgot to take photos of the contents before it was too late.

There are three numbered bags in total, a sticker sheet, and of course the instruction manual. The cost of this set is £34.99 with a respectable piece count of 497, although most of these are small. 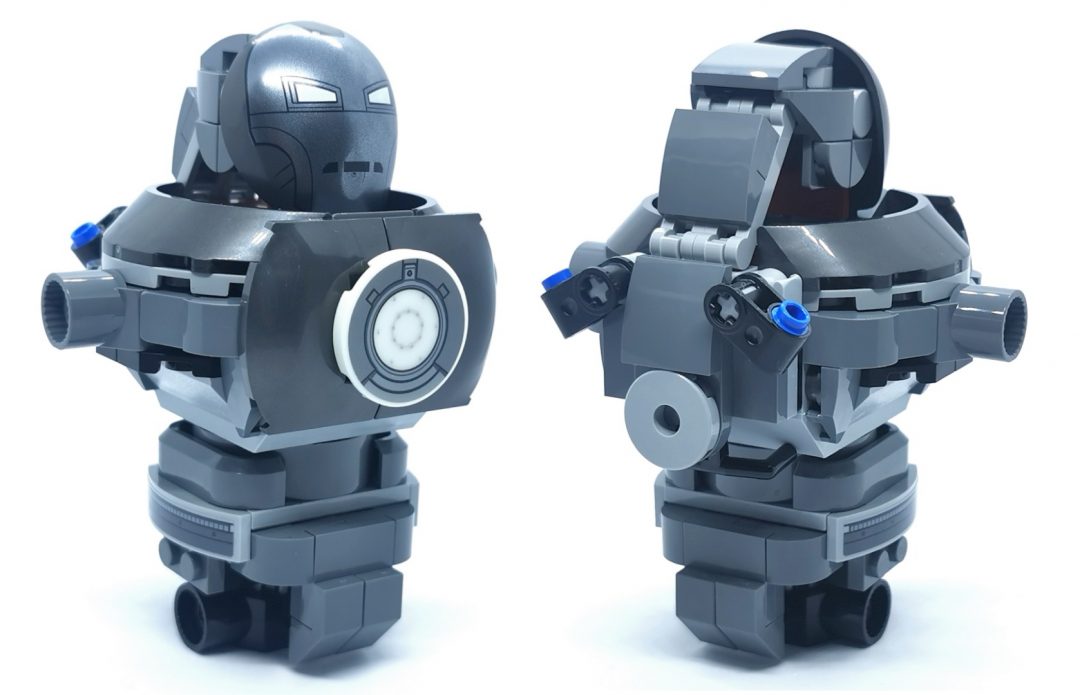 Bag one has us construct the main torso and Helmet, applying a couple of stickers along the way. Thankfully the Helmet is printed, as curved pieces and stickers don’t mix.

As this set is slightly higher in price from the previous two we’ve built (mentioned above) we see somewhat of a higher quality build too. Take the cockpit for instance, for starters it’s more accommodating for its driver and it almost has a luxurious look about it. Its construction is a lot more solid too and feels sturdy enough to keep up and fling around, especially when younger fans get ahold of it. 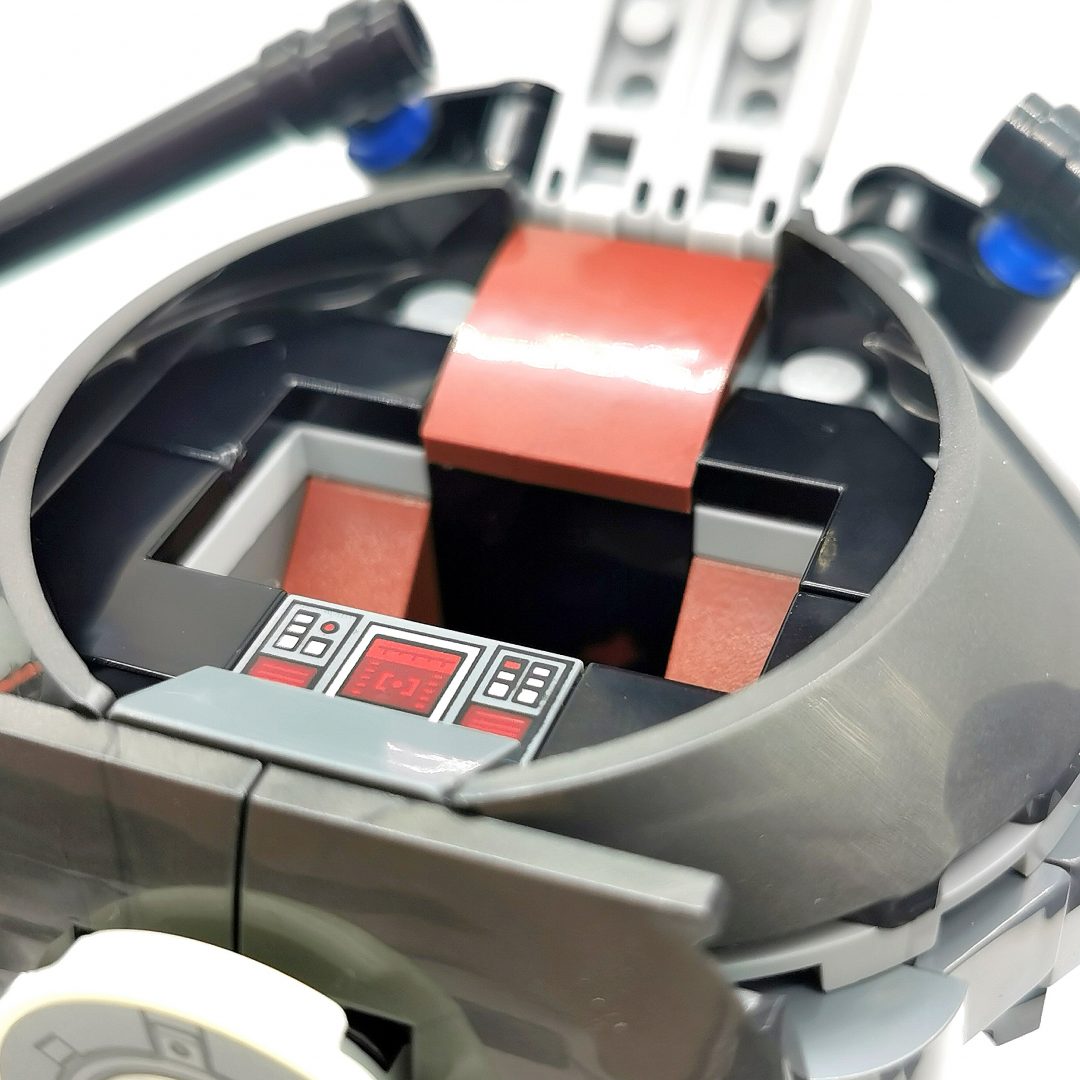 There are also a few glow-in-the-dark elements in this set, the main one being the chest plate/power source. Once charged up, holding it near a light for several seconds, it produces some awesome results and is quite strong, it certainly adds another level to playability. There is a sticker on the circular tile but that in no way hinders it, leaving it blank would have been a bad choice, who thought I’d be defending LEGO stickers!? 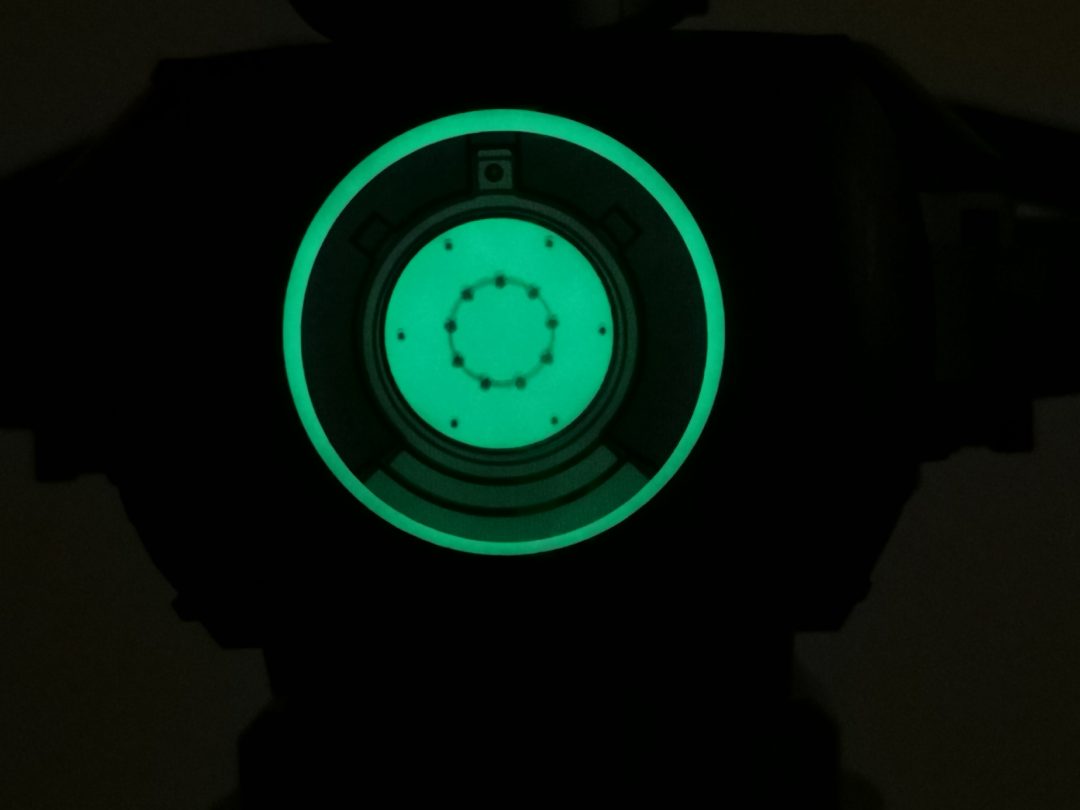 Bags two and three finishes off the Mech by adding the arms & legs. I’ve most certainly mentioned this before Mechs are great but when it comes to constructing both sets of limbs it becomes a tad boring and stale, almost to the point where I could give up. Thankfully I don’t and to end up enjoying the overall build, perhaps it’s the thought of them that is the problem and not the actual builds themselves, who knows.

Saying that both arms & legs do have considerably more details then the previous two and some rather interesting techniques. Adding parts that resemble pipes, nuts & bolts, and other small details is really well thought out and gives the Iron Monger Mech that raw and almost unfinished look, just like in the very first Iron Man movie. 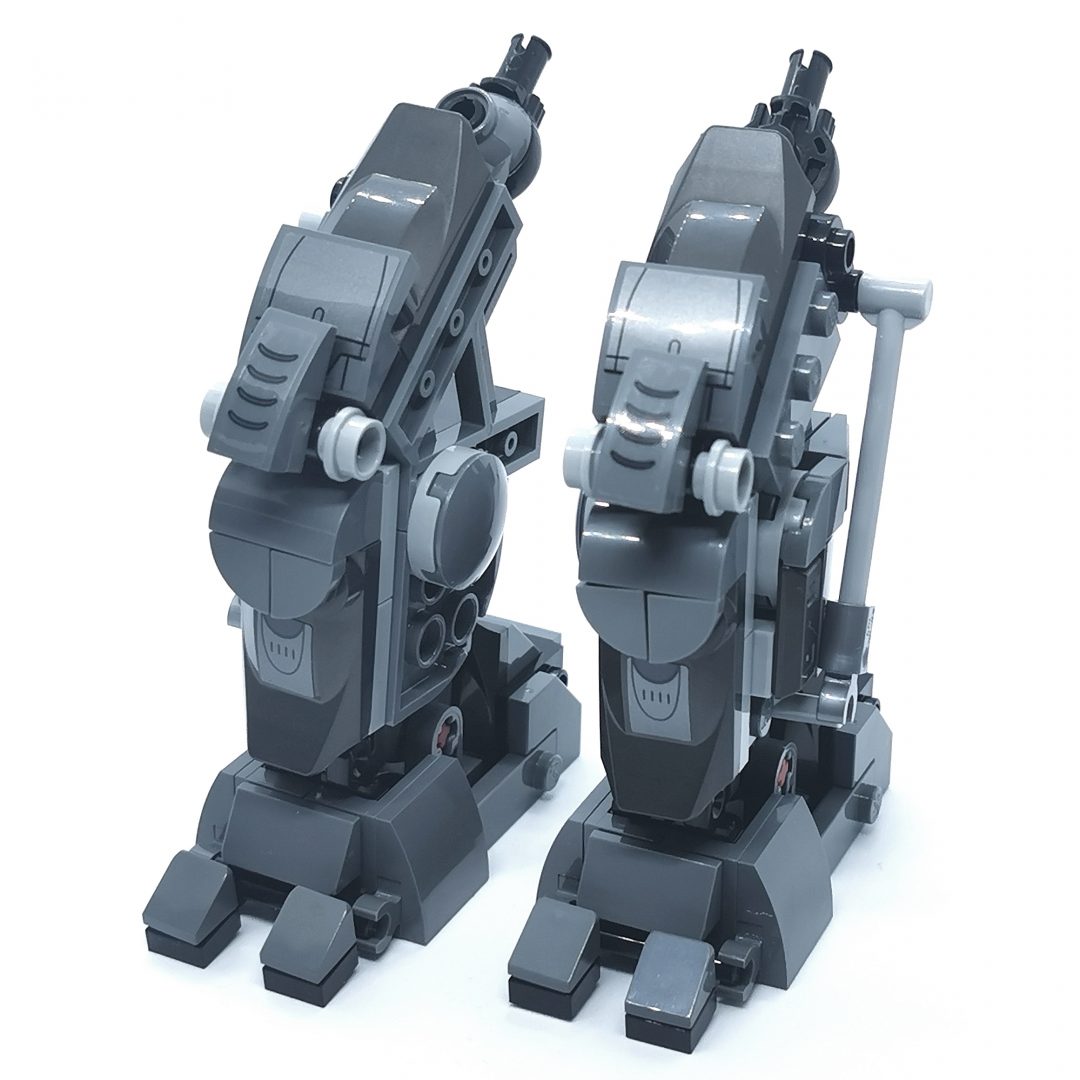 Each arm has a cool but very finicky shoulder covers, they look great but constantly fall off when adjusting them. Without the covers the shoulder area would look to exposed so I’d would rather have them than not.

On the forearm of each you’ll find two different types of weaponry, they both fire 1×1 studs/tileals but in different ways. The right arm has a very big stud shooter that can fire 6 1×1 studs within milliseconds of each other, which it great fun but a pain to find and pickup!

The other arms gun is smaller and shoots 1×1 tiles, which you load via the front by pushing them inside the guns barrel. You then push the rod in and out flies the projectile. Please be careful when playing as to not cause any injuries. 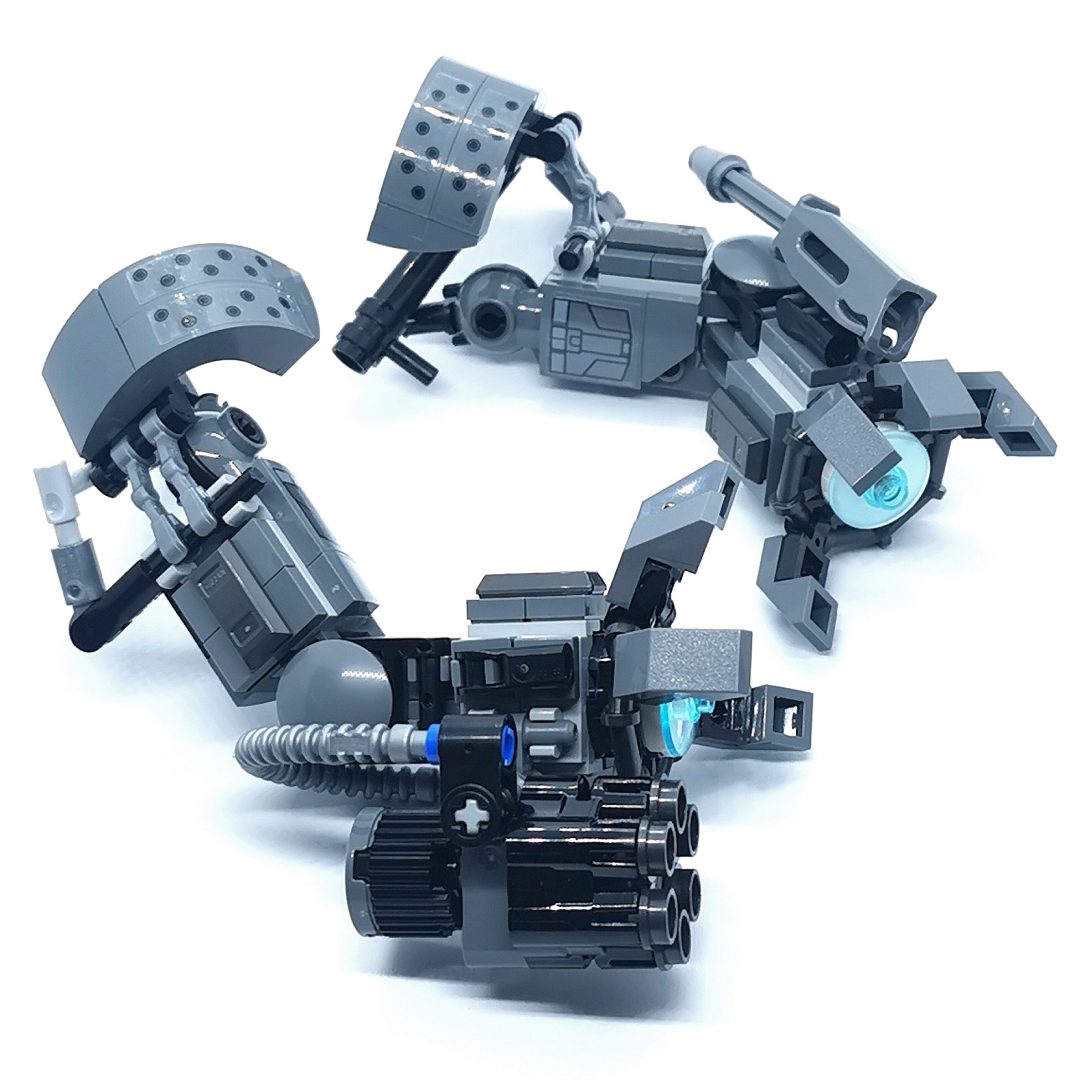 Pop all the body together and YU get a very cool and extremely playable Mech character, which has great articulation, weaponry, and general awesomeness!

When a set like this comes along that all the Minifigures are exclusive too, it instantly feels like you’re getting your moneys worth and then some! 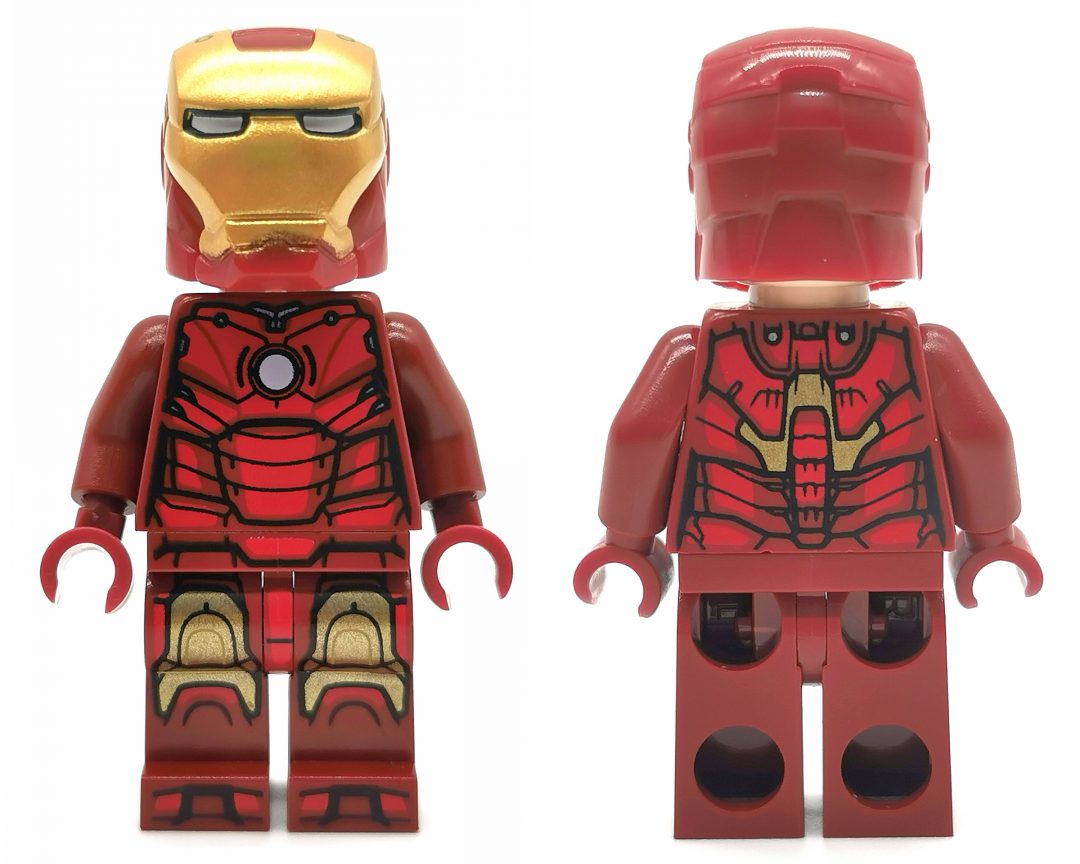 Starting with Iron Man who is sporting the Mark 3 suit, we see him in a familiar look with the red colour base and the black & gold accents. The printing on the torso and legs is stunning and really pops, the only let down being the arms, LEGO could have continued the design onto the arms and really made this Minifigure standout from the Iron Man crowd.

It’s also refreshing to see the return of the flip-up helmet in all its two-piece glory. Don’t get me wrong the newer, solid piece, Helmets are cool, but there’s just something about the originals that feels and looks right!

He also comes loaded with two faces, one with a light blue HUD (heads up display) and one without, this seems to be the default for this character so nothing new or surprising sadly. 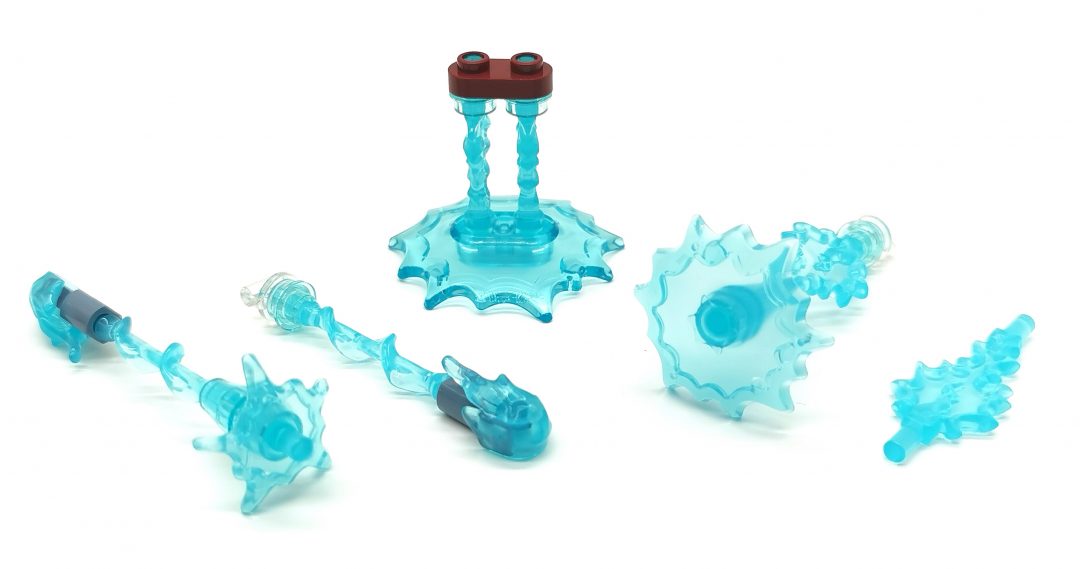 Another nice touch is including a hair piece, so when you remove the helmet you can pop the hair on and it doesn’t look strange. Staying on the subject of accessories, Iron Man comes with a plethora of transparent blue elements to imitate his thrusters and Arc/suit beams. I’m a big fan of these parts as once again it adds to the level of playability to the set overall. 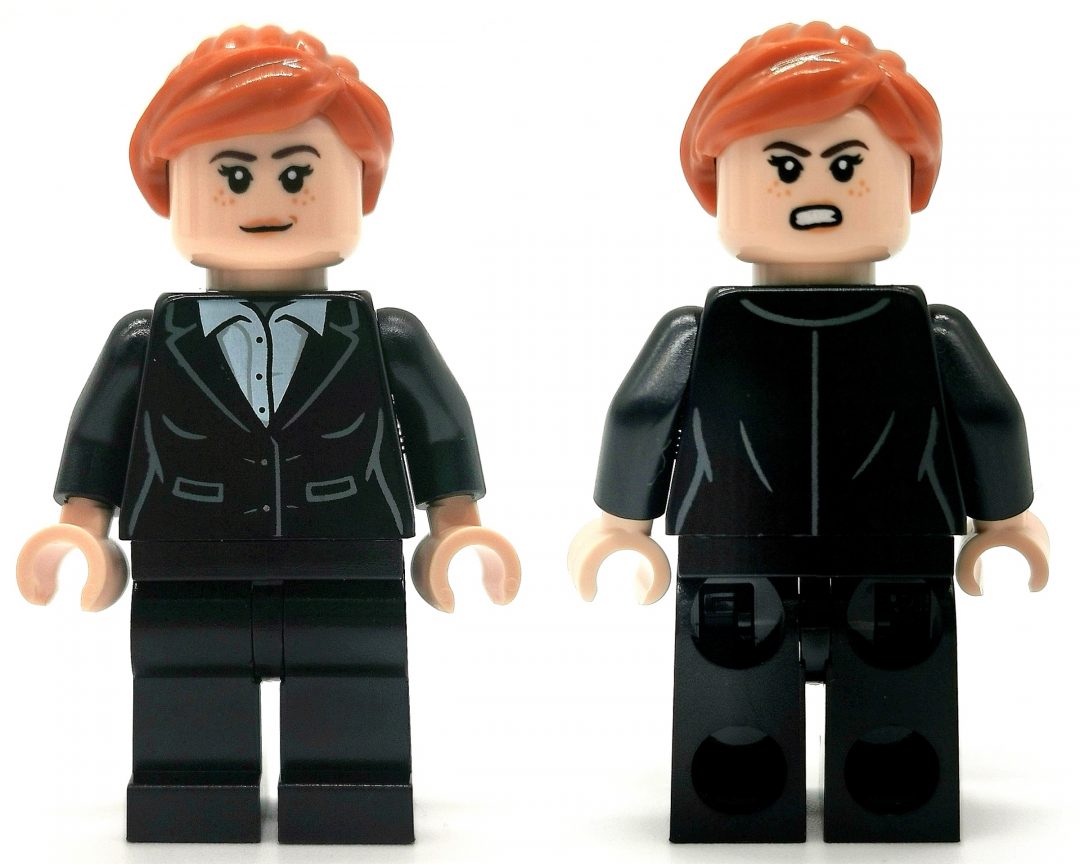 Moving onto Pepper Potts, i must say that I’m an avid Minifigure collector, especially LEGO Marvel, but I don’t have a Pepper Potts, until now!

It’s another cool Minifigure that again has two faces, one with a little smile and the other more anger and ready for action. The red/ginger hair matches the character from the movie and works well, also matching the movie is the suit she is wearing, it’s so nice to see LEGO stay with that option to get Pepper Potts in different attire. 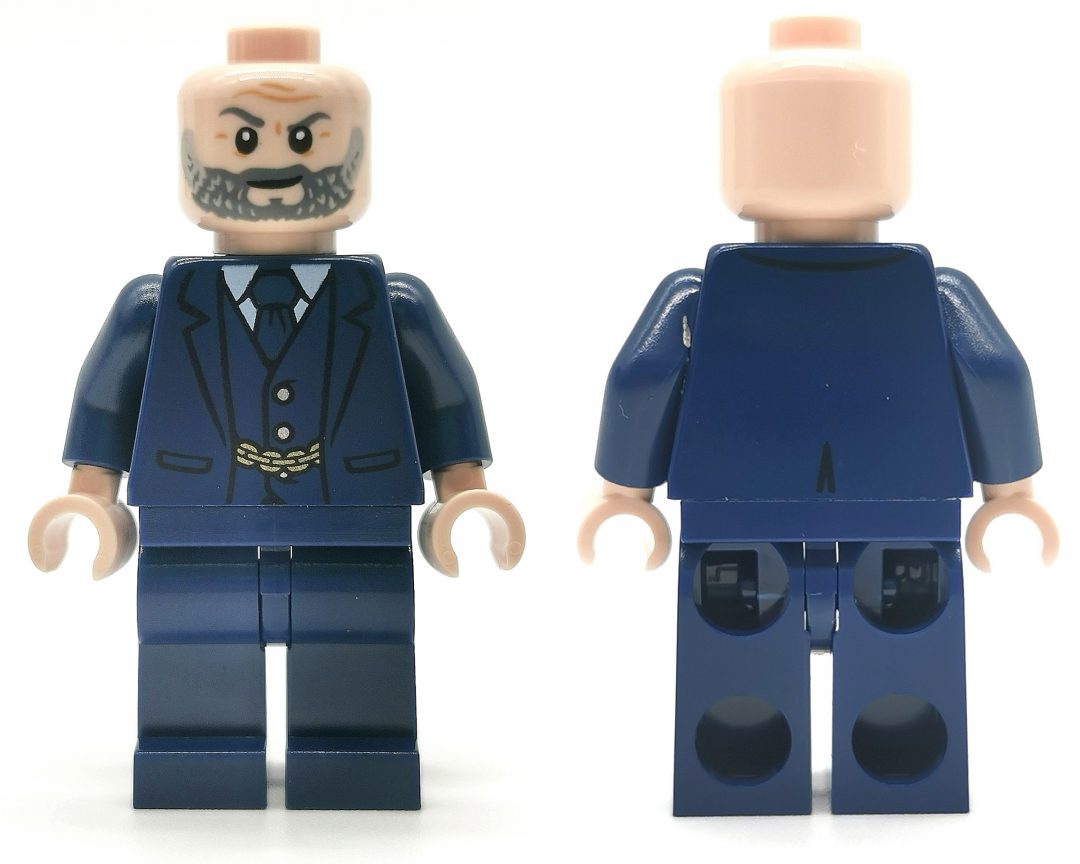 With Obadiah Stane being not only exclusive to this set it’s his first ever appearance in LEGO form!

I’m a big fan of Jeff Bridges, the actor who portrayed Obadiah Stane on the movie and getting him as that character is so cool and one of the top reasons for me to grab this set.

As you can see from the image above he comes with just a single face, this is because there is no hair piece to cover the alternative and so would look very strange constantly on show. His face design is spot on and shows an expression somewhere in the middle, between straight-faced and angry.

The torso is the only part to have printing on it as the arms & legs have been left blank. I actually don’t mind this as it represents the suit he is wearing well. With what little printing there is the front of his jacket looks nice and again is something different in the collection. I can see this torso being popular with MOC (my own creation) designers and recreating Monster/Gangster scenes. 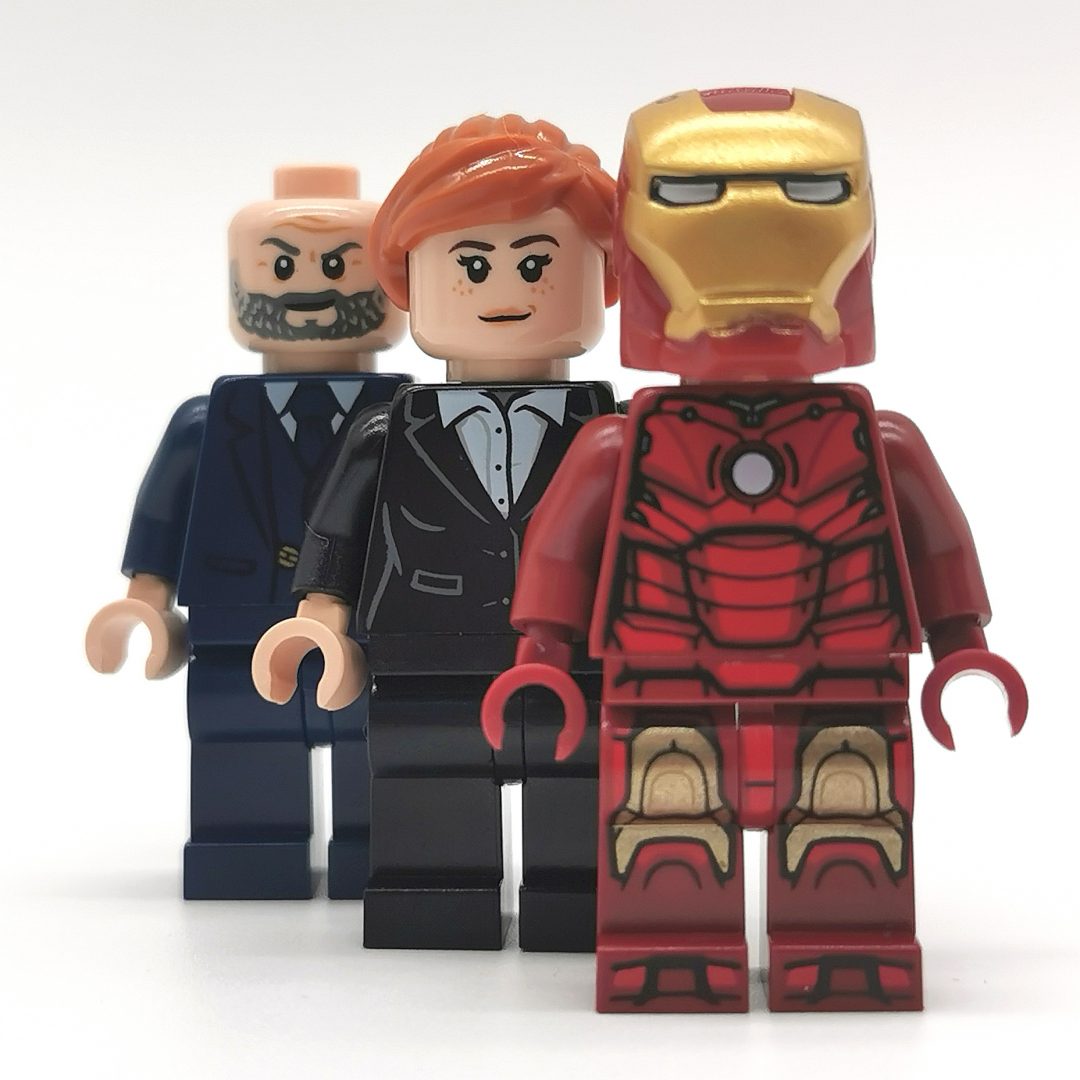 The build is superb and has a lot of playability to it with its posable arms & legs. The weaponry attachments look the part and could deal some serious damage.

The stickers are designed well and work as a while, although printed parts would have been way better, I can put up with stickers in a set of this size and price.

The Minifigures are the prize of the set with each being exclusive. If I had to choose I’d pick Obadiah Stane as my favourite, getting him for the first time is amazing and adding him, and the other two, to my collection makes me happy! 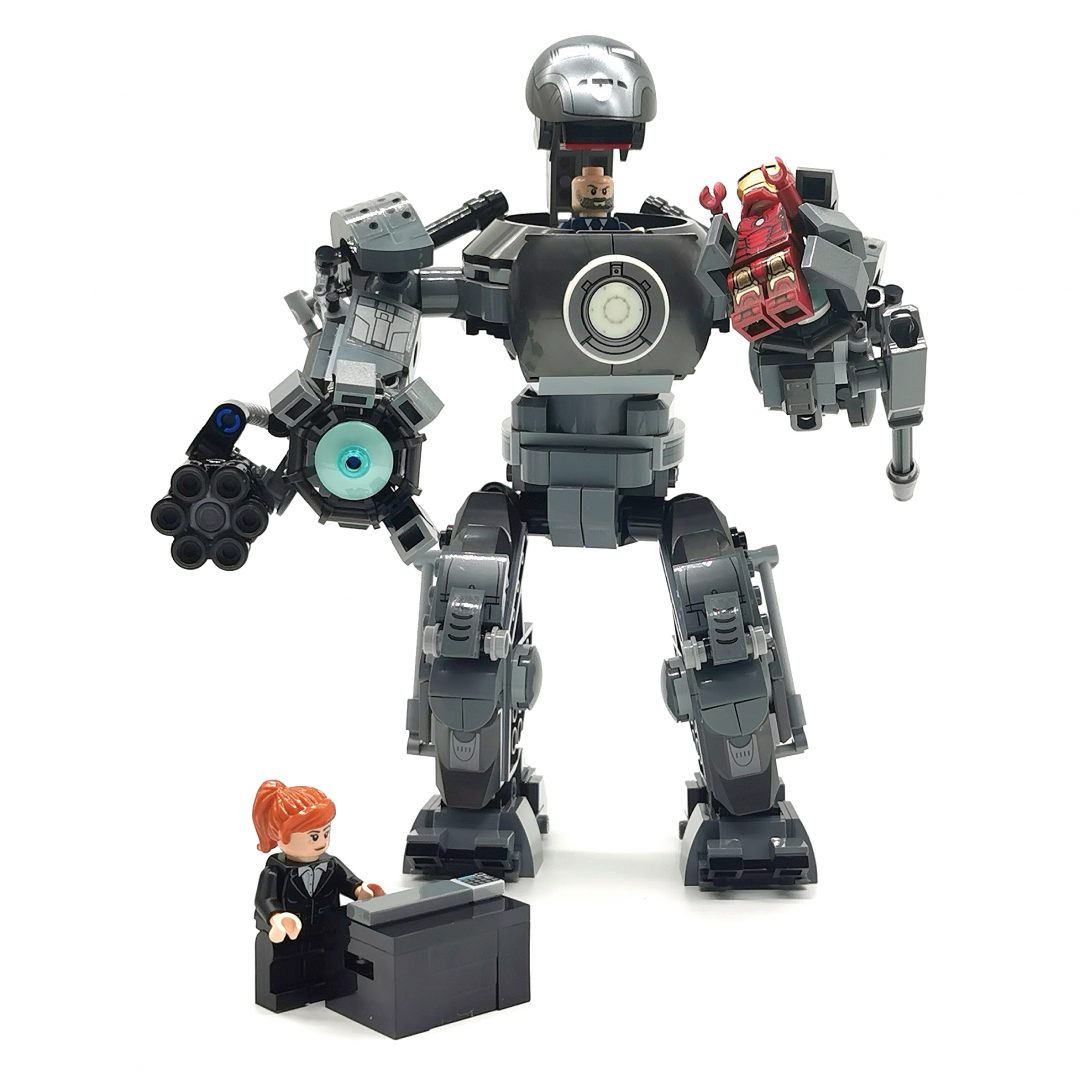 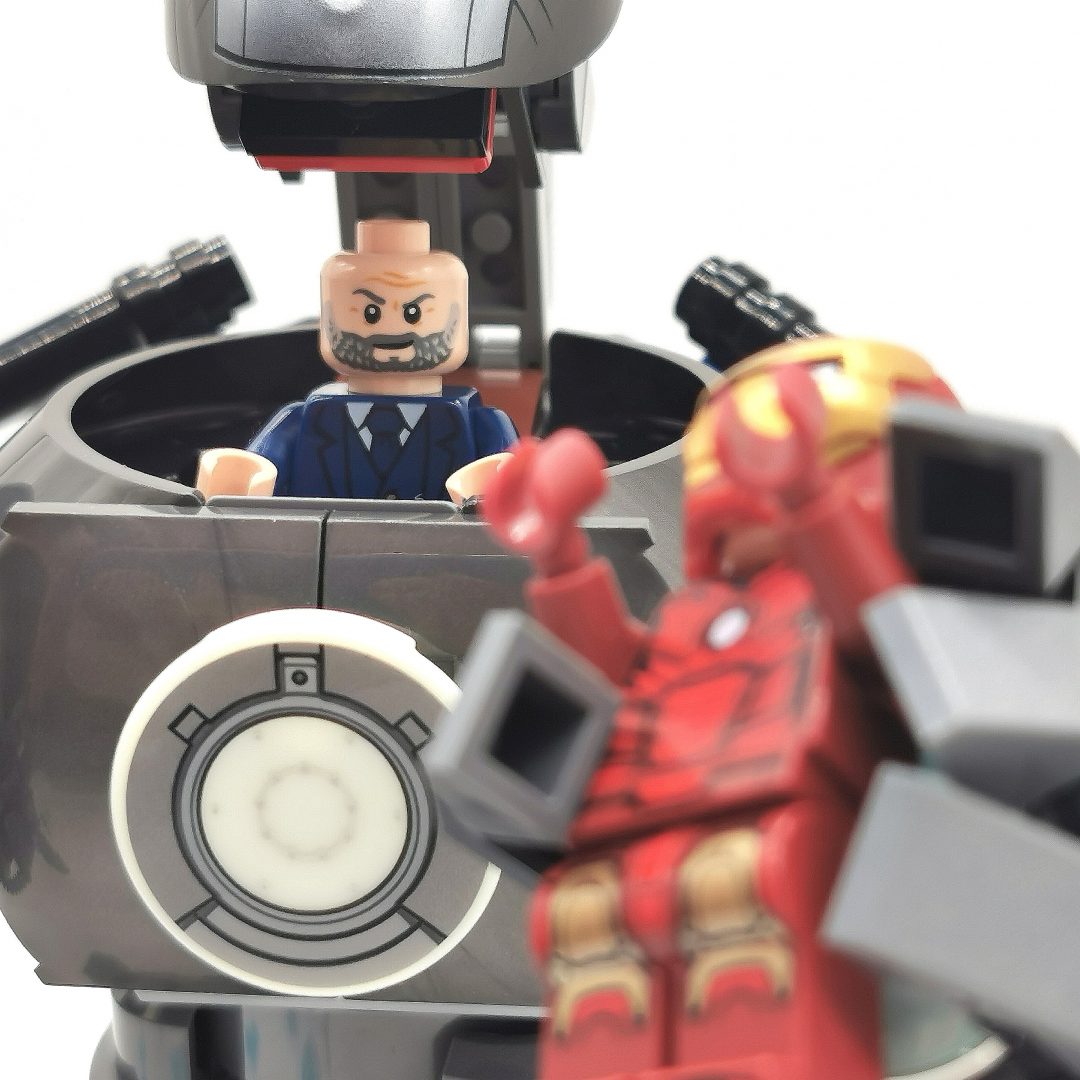 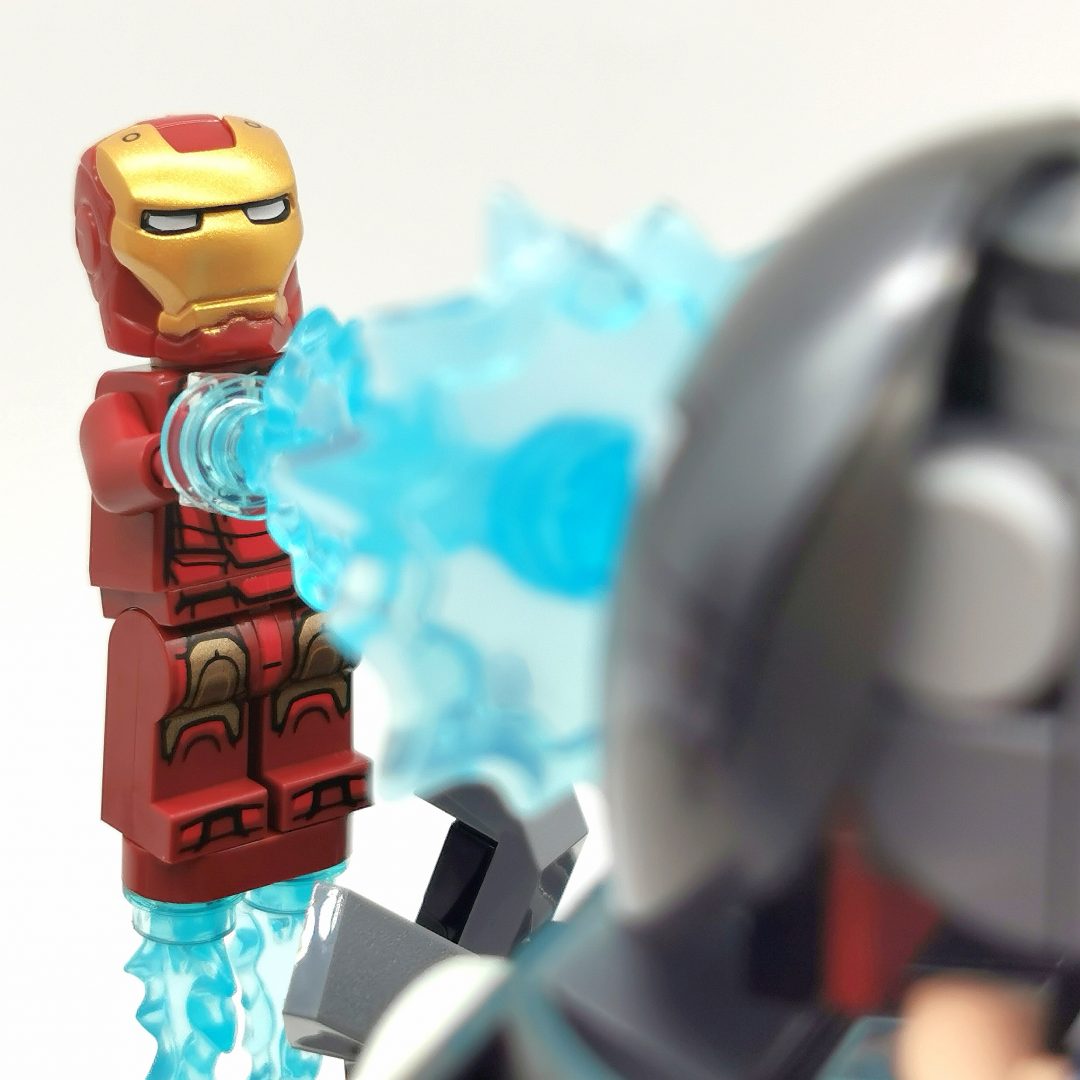 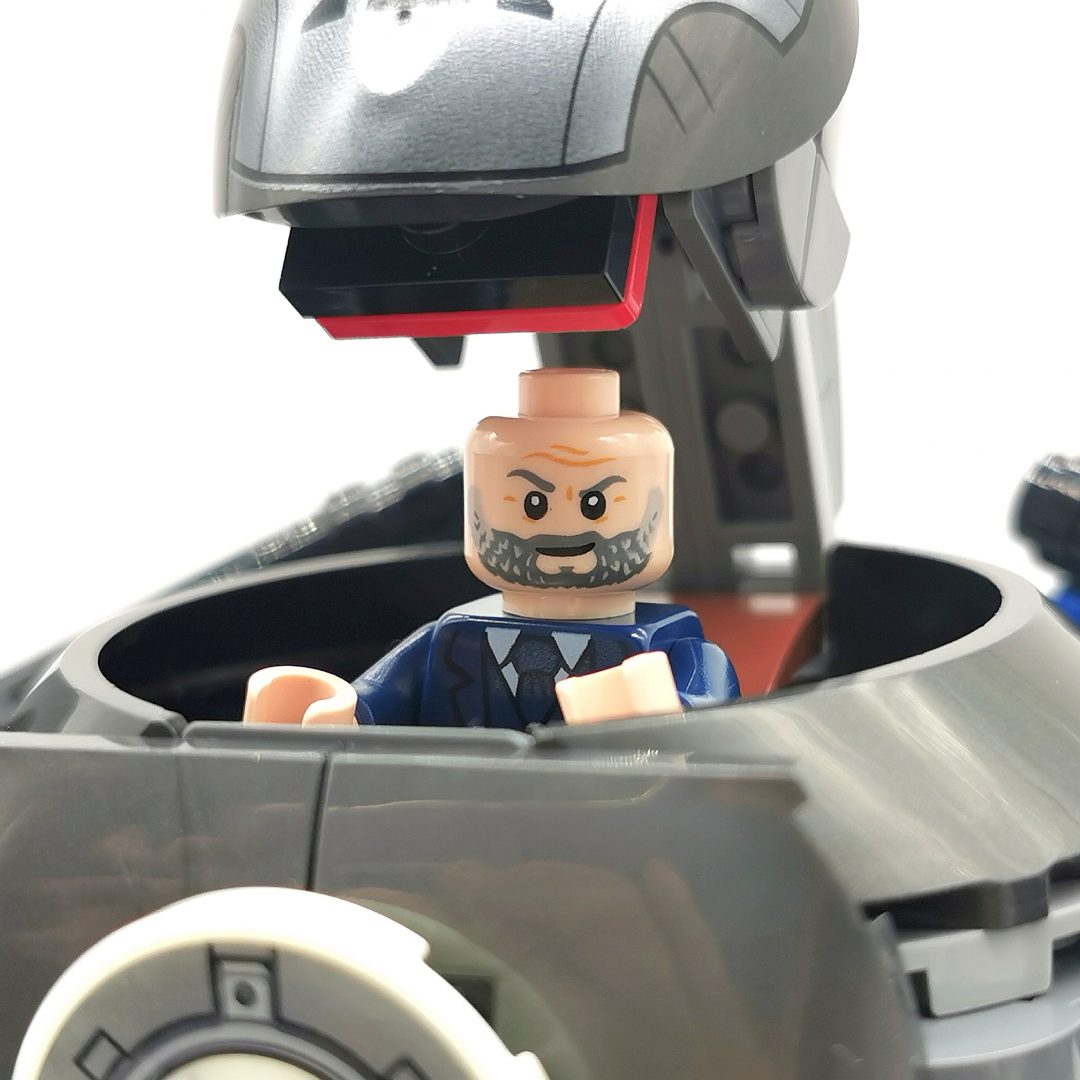 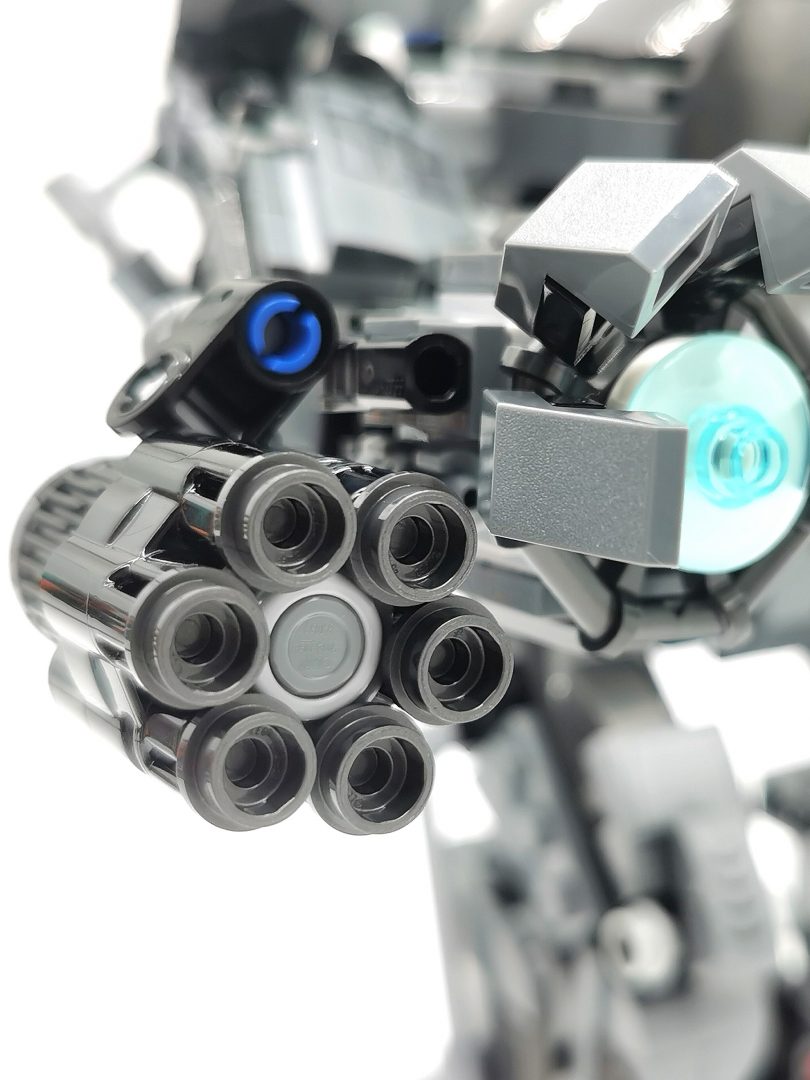 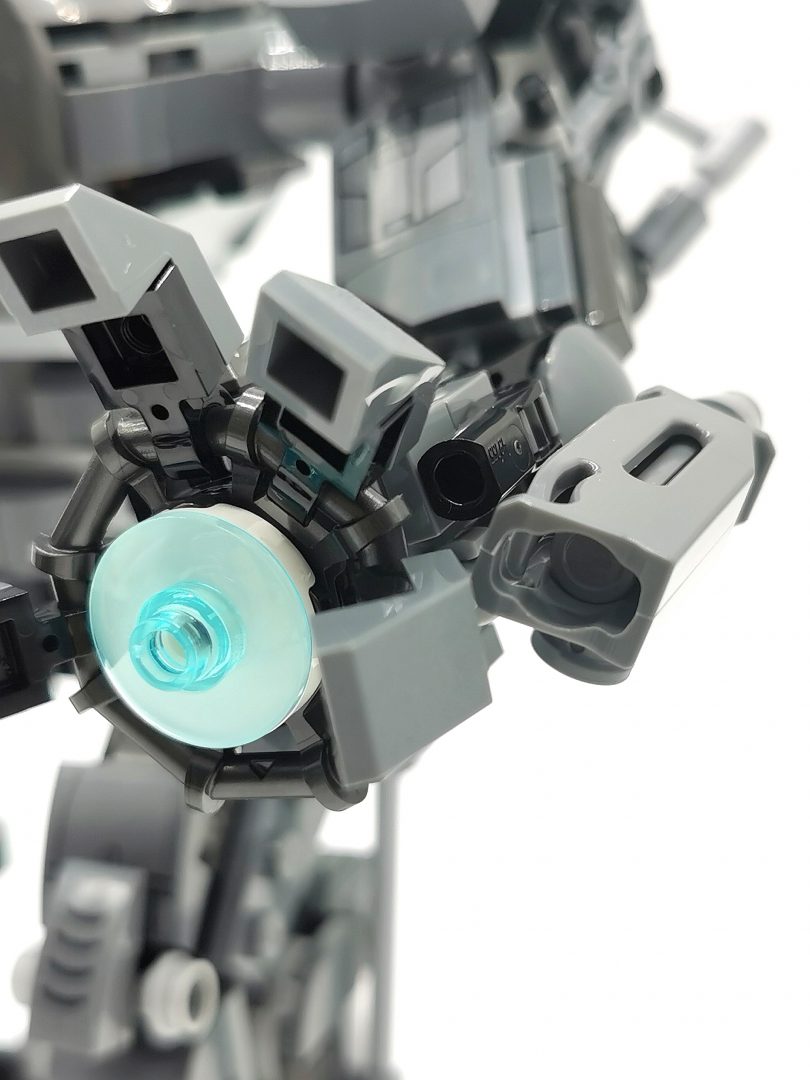 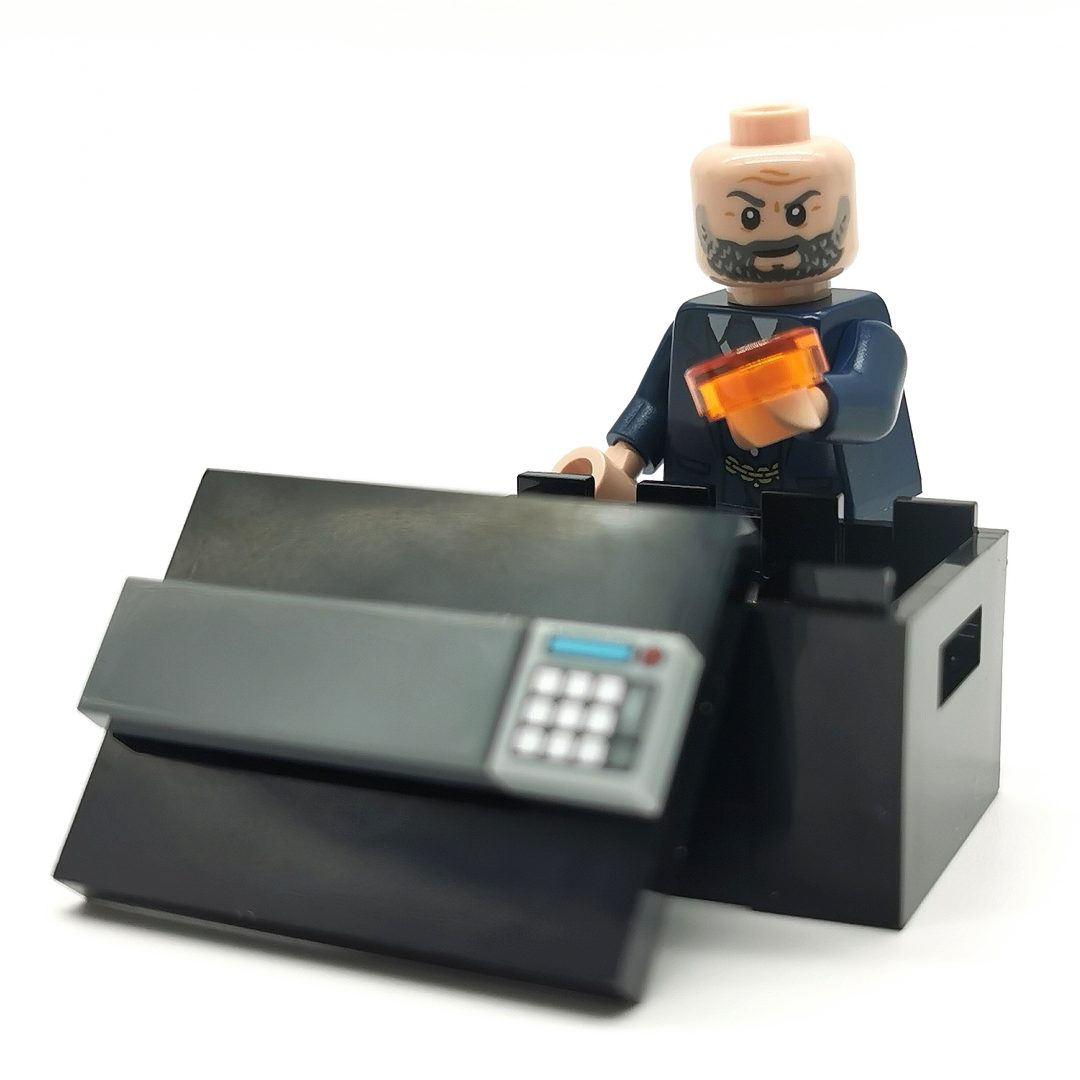 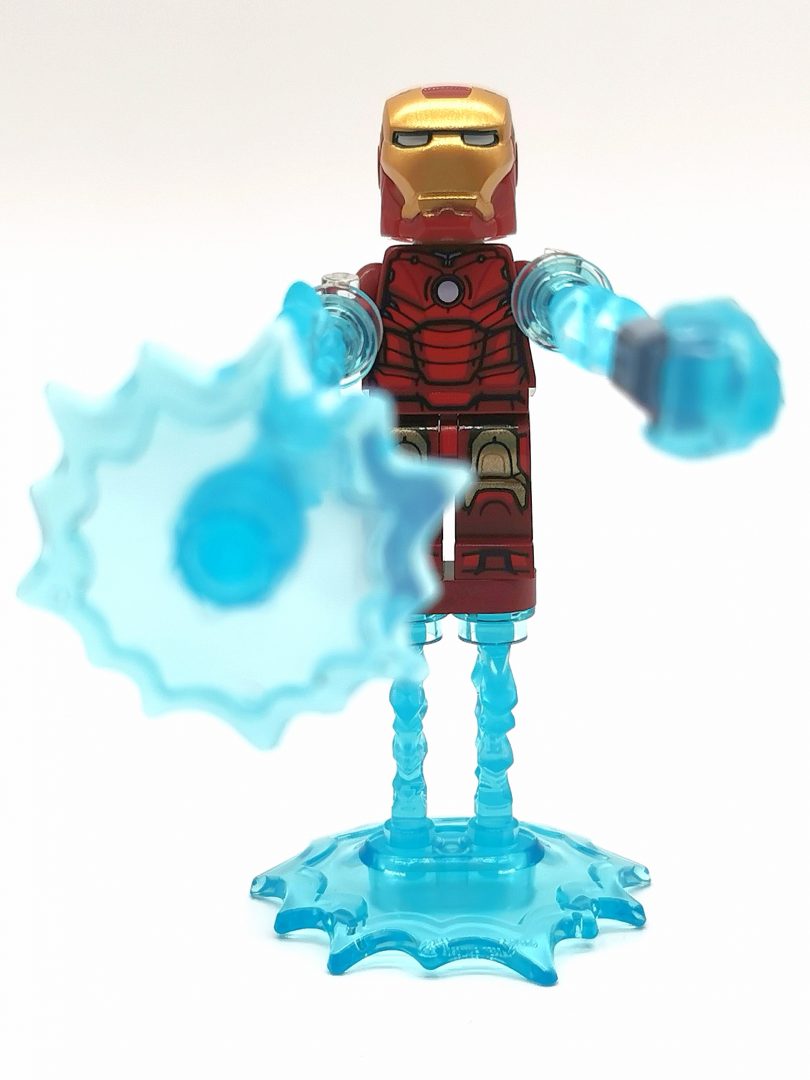 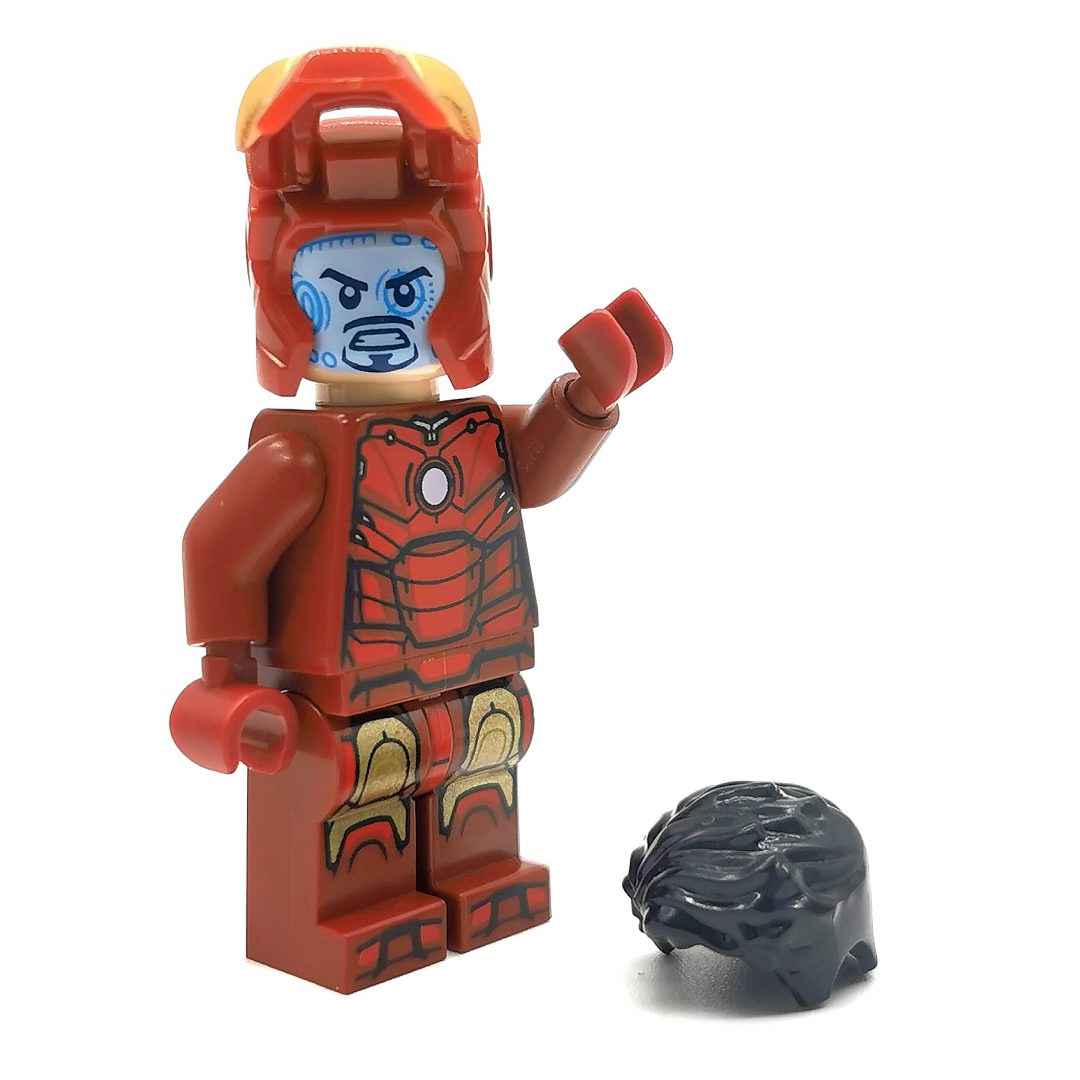 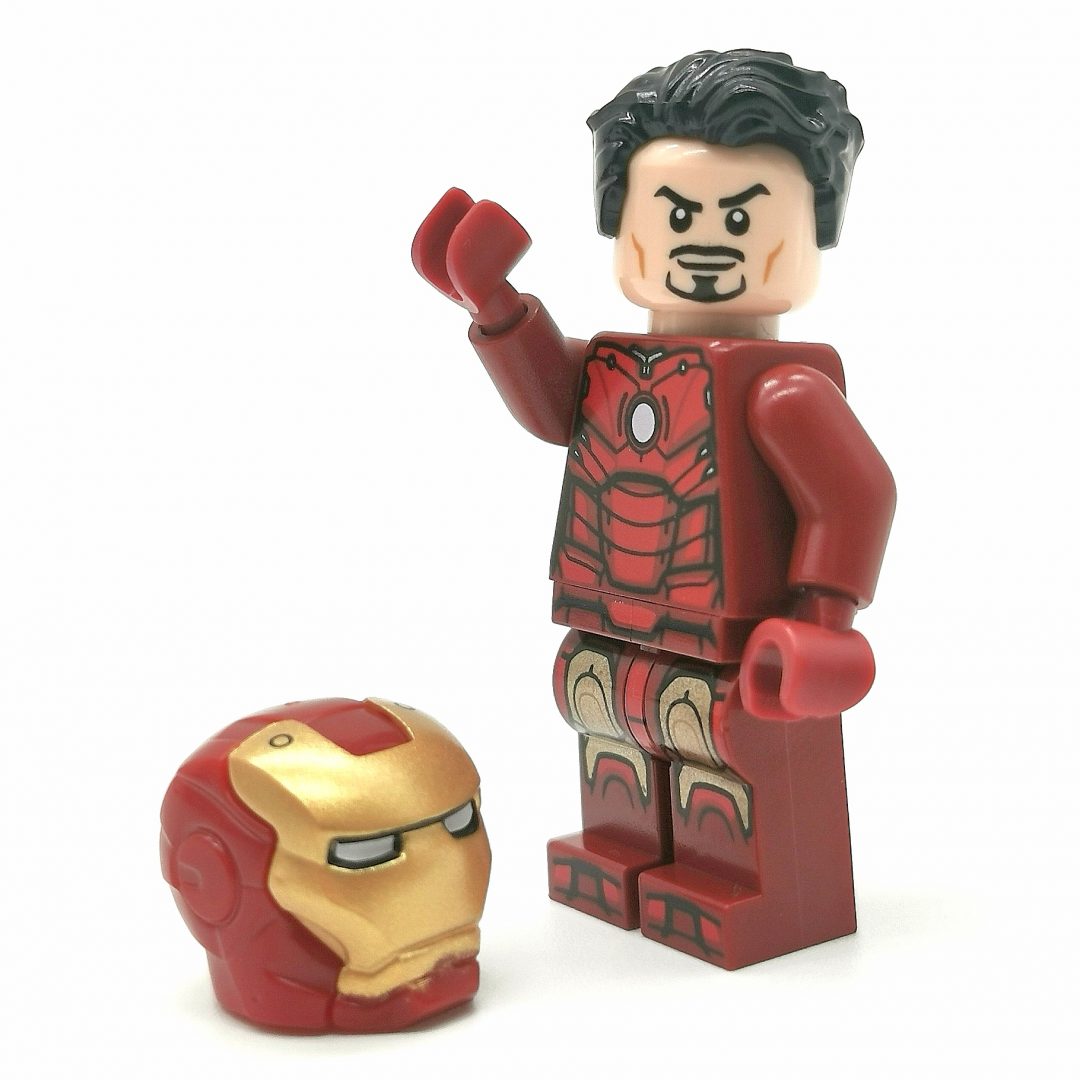 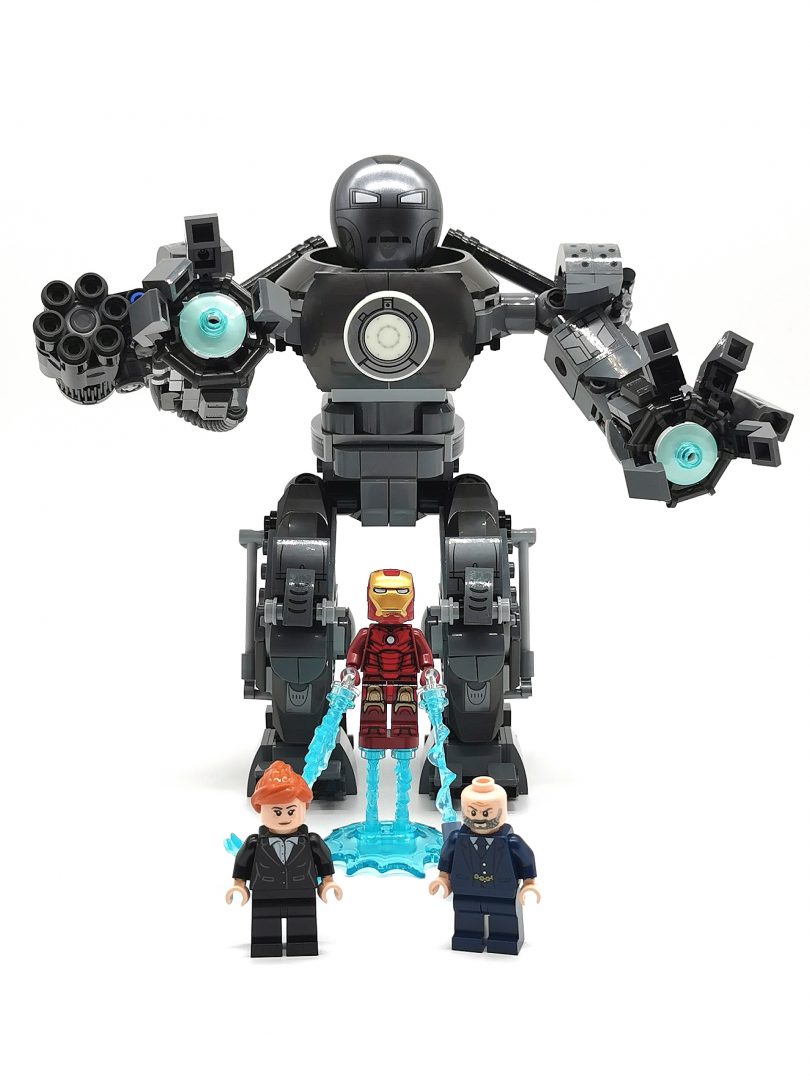 Thank you for reading our review, we truly appreciate your time. Please feel free to comment below any questions or thoughts you may have regarding the set or review. 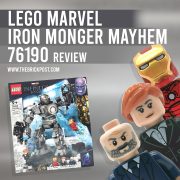 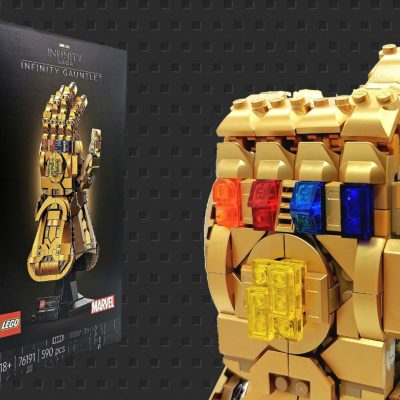