NASA and space is something that has interested me since a child, just imagine that feeling of going into space, seeing Earth from space and setting foot on the Moon! LEGO have created some amazing space and NASA themed sets including the LEGO Creator 10266 NASA Apollo 11 Lunar Lander!

The box art is amazing, with the Moon’s surface and the Earth in the background. Having the piece count is great too as we don’t usually see this on the European boxes. 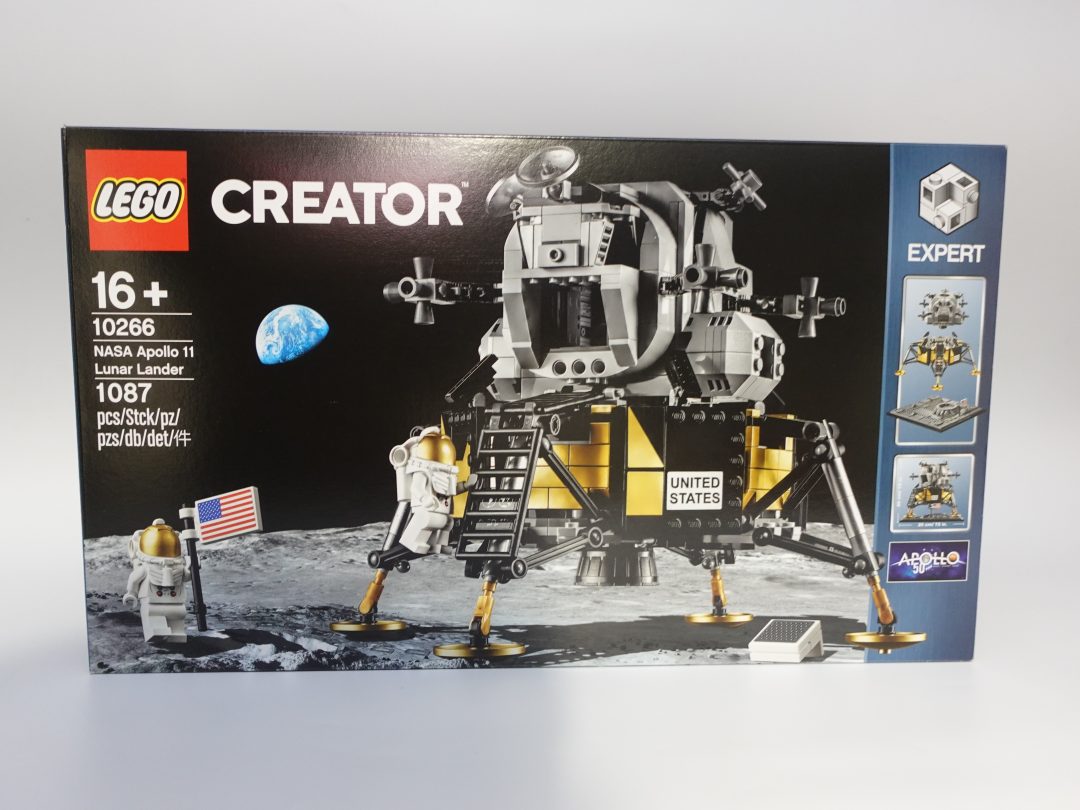 Included in this set is 1087 pieces with 2 minifiures. I personally dislike stickers and this set comes with a mirrored (foil) sticker sheet consisting of 14 stickers, despite me not really liking stickers these seemed to be fairly easy to apply and really add some great detail to the set and retails for £84.99

The build was really good and had some amazing techniques that we don’t see that often, the finished set can be separated into 3 sections which I really like. 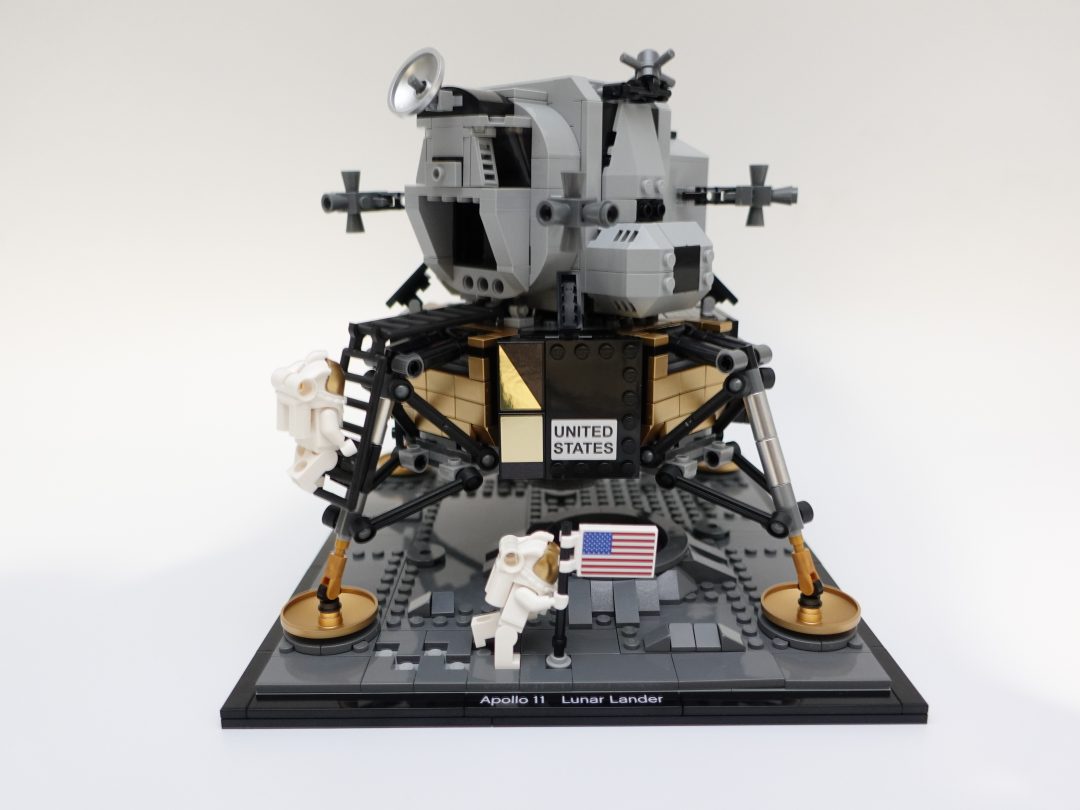 The first section that you build is the base, or moon surface, and the designers have done a really great job on this. It is built up in 3 main layers, finished off with a black tiled surround with the text “Apollo 11 Lunar Lander” printed on a 1×8 tile. The surface of the moon has a really nice crater beneath the lander and even has mans first steps on the moon which is a very nice little touch. Even the American flag has been included, which unfortunately is a sticker.

There are a lot of gold pieces in this set, I wonder if this effected the cost for this set, however this is a must for this set to look as accurate as possible. The leg build was really nice using a lot of ball joints and technic links, giving the set a very sturdy finish, whilst keeping an accurate build. On one of the legs there is a sticker on a 2×2 tile showing the NASA mission patch. 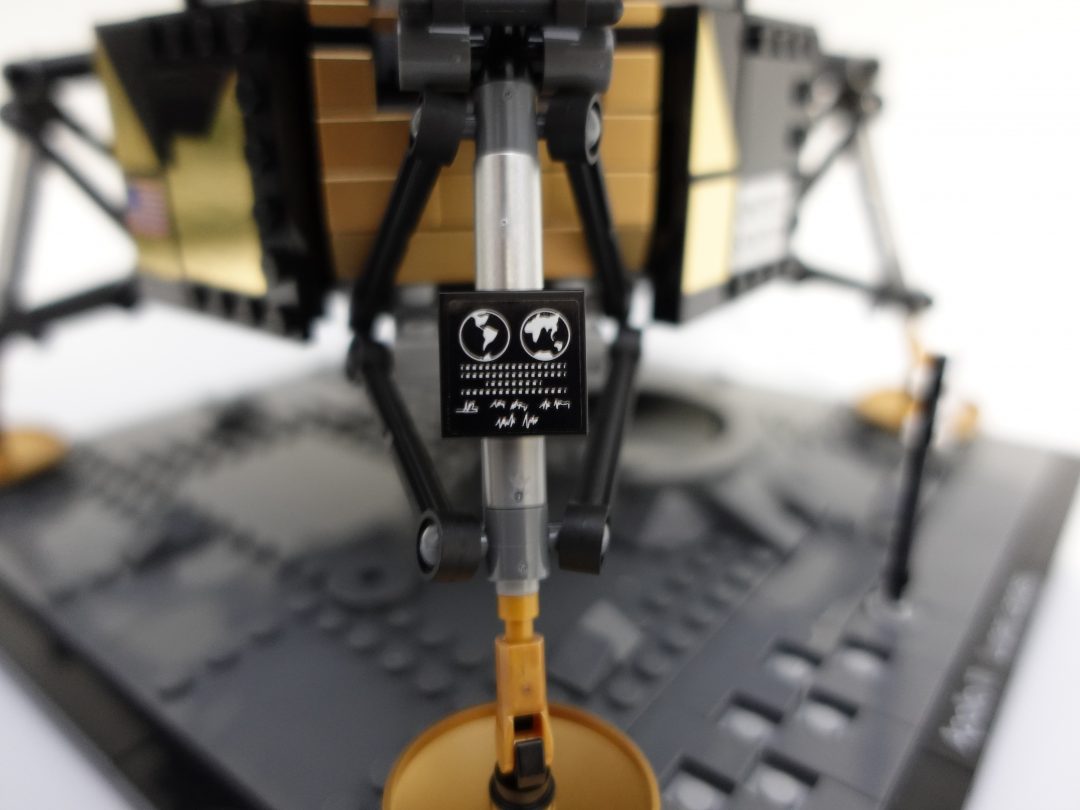 These little details are what really makes this set, included in the build are some side quadrants that open up to reveal some other little details like the camera (1×2 printed tile) that was used to record the mans first steps on the moon and the laser reflector (2×2 tile with a sticker) that was left on the moon for researchers to be able to calculate the distance the moon is from the earth. 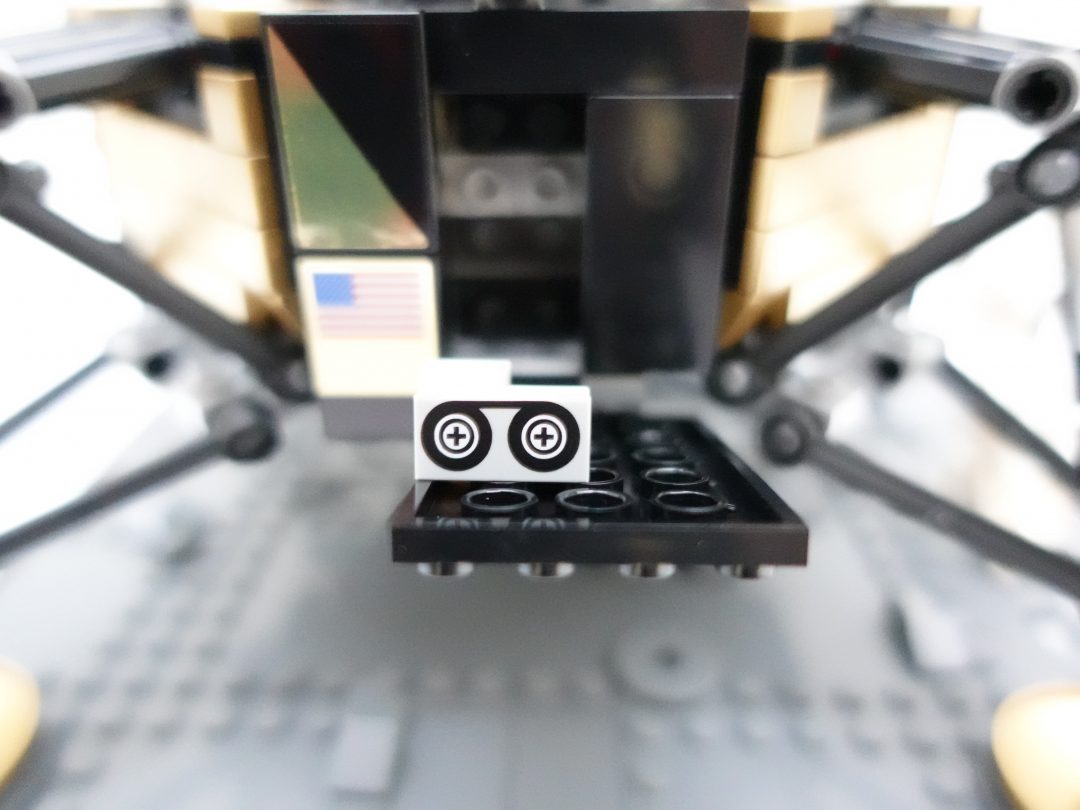 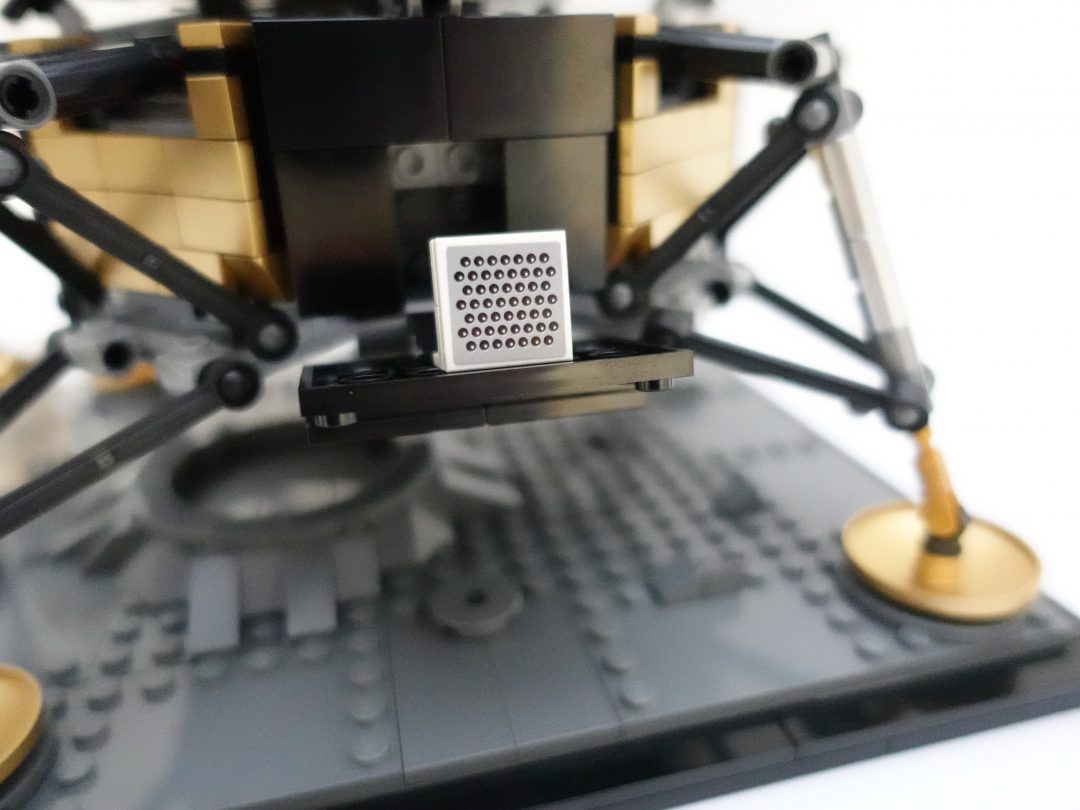 The bottom section of the lander contains some unique techniques to be able to create the exact shape of the lander, even included in the build are the fuel and oxidizer tanks. To create the effect of the gold foil that was used on the lander, the designers have used a mixture of gold stickers and gold tiles which works really well. Also an American flag and “UNITED STATES” text stickers are on the side of the quadrants. LEGO have included plates with clips to be able to attach the module and remove with little effort. This section of the build is very solid. 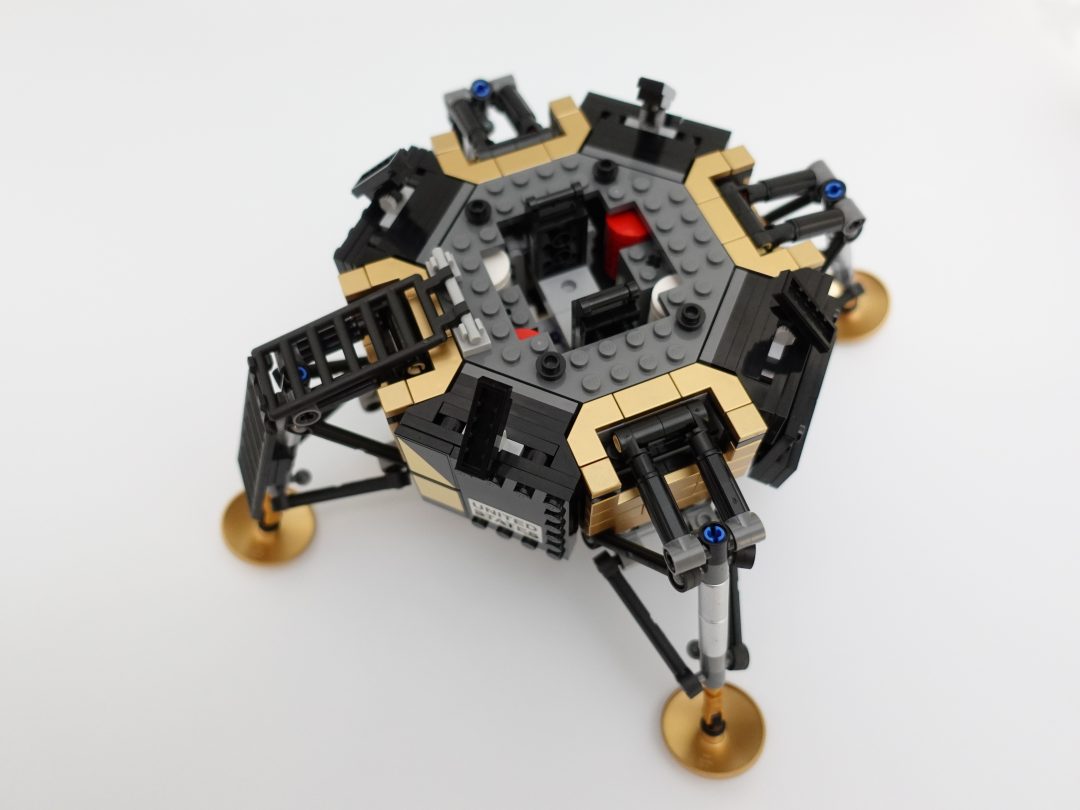 Moving to the module on the top of the lander there are some nice techniques used to invert the build where required, the designer has included all the instruments on the module including the reaction control system (RCS) to help land during the descend to the moon. Inside, several stickers have been used to create the control panels and has enough space to fit the minifigures inside. This section can split into 3 sections and the way the clip sections have been designed are very clever, however one of the connections on my set seem to be very loose and almost fall out, hopefully this is just on my set and not everybody else’s. 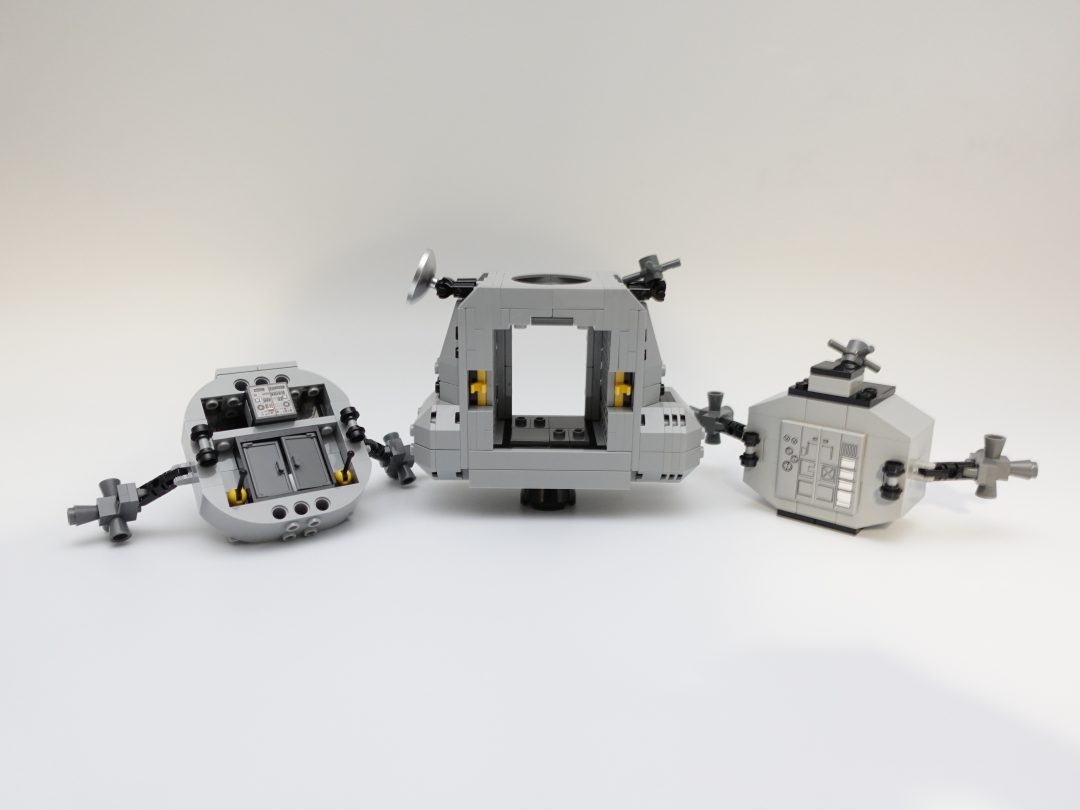 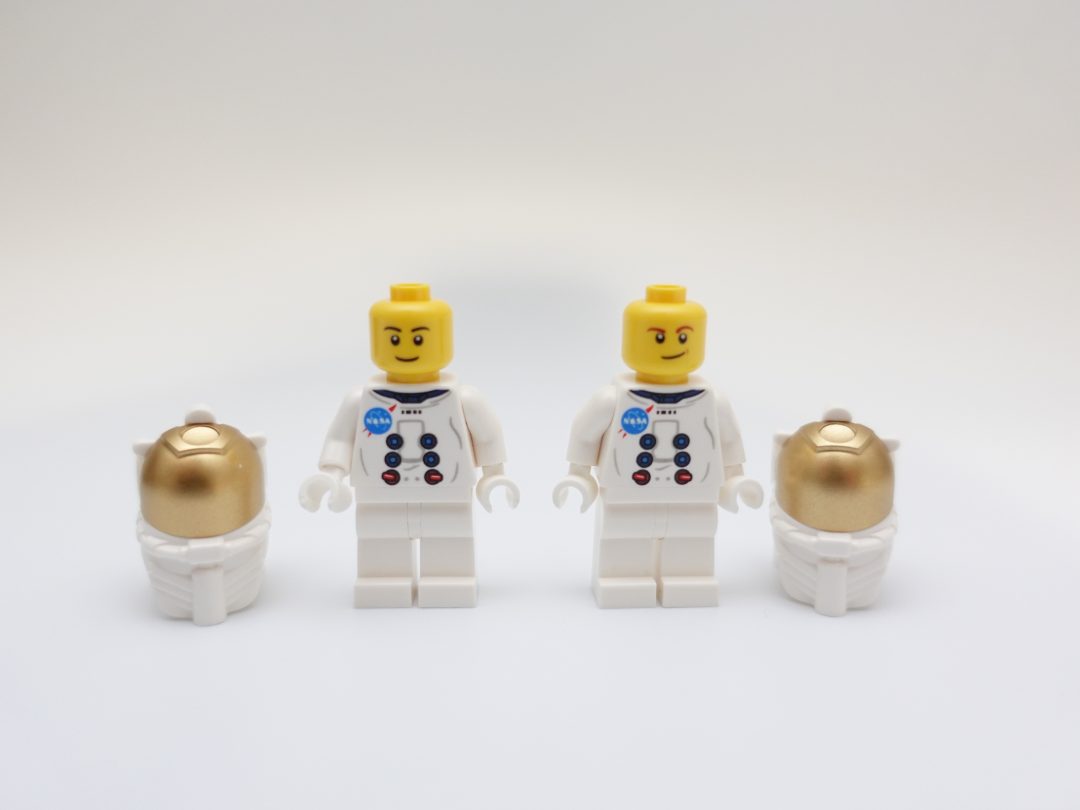 The 2 minifigures that come with this set are a nice addition to the set, the prints on the torso are really nice and represent the space suits worn on that historic trip. However the heads are just generic and should, in my opinion they should have been made to look like Neil and Buzz. The helmets used are nice but not accurate either and we could have done with LEGO making the  primary life support system (PLSS) out of buildable element, I personally would have used a 3×2 plate with a 2×2 tile and 1×1 tile with the America flag printed on it. This is a MOD I will be making in the future.

Overall I really enjoyed this build, the finished build is very solid and looks amazing on display. If I could change anything it would be to replace some of the stickers for printed pieces and change the minifigures to represent Neil Armstrong and Buzz Aldrin. Other than that its a great set. Is it worth the price tag? I think it is and if you like space themed sets it is a definite buy. Even NASA lovers that don’t usually buy Lego should buy this!!

I build this set over 2 livestreams on my YouTube channel – Boom Brickz with a good friend Brick Beat. If you would like to see my full length video review, please checkout the video below!