Today I’m taking a look at  set 60220. The Lego City Garbage Truck. Released in 2019 this set is rated as a ‘4+’ set. Meaning it’s suitable for any much younger builders, this doesn’t prevent it fitting in with any LEGO city collection, however. 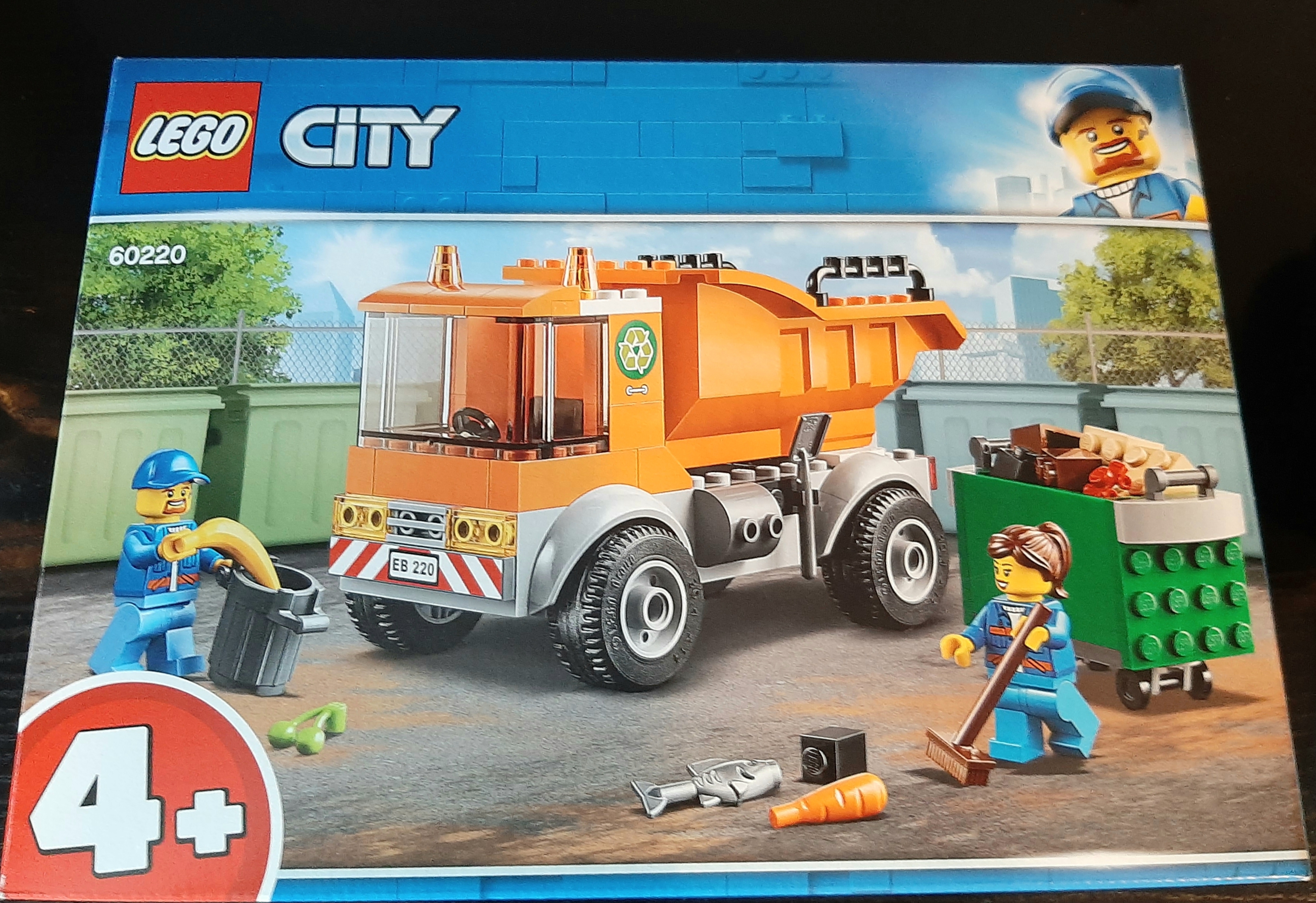 One look at the box and it’s plain to see that the emphasis of this set is on playability. In the current climate of LEGO sets that are aimed squarely at the AFOL community, it’s nice to contrast that with the simple construction and sense of fun we have here. 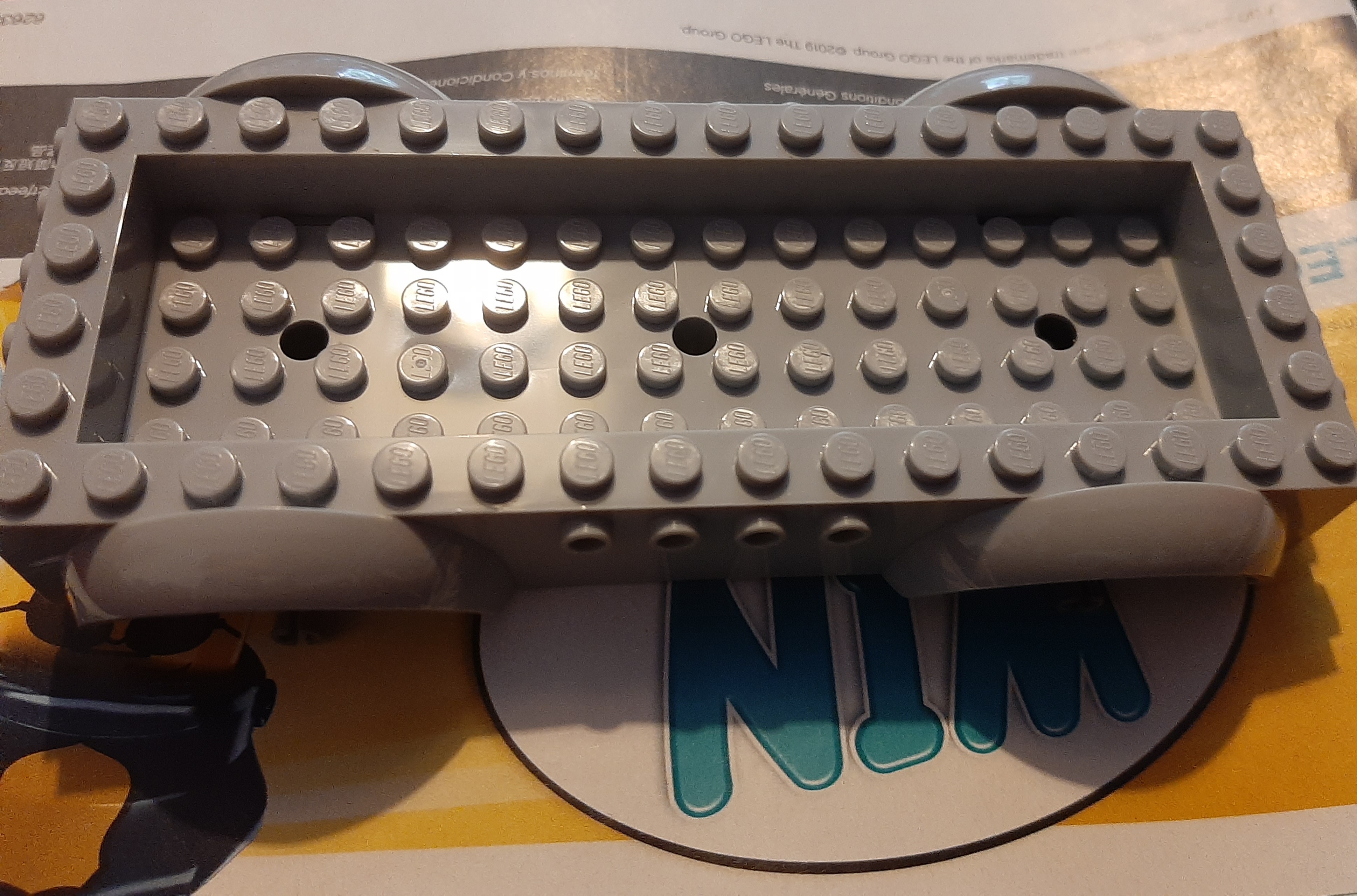 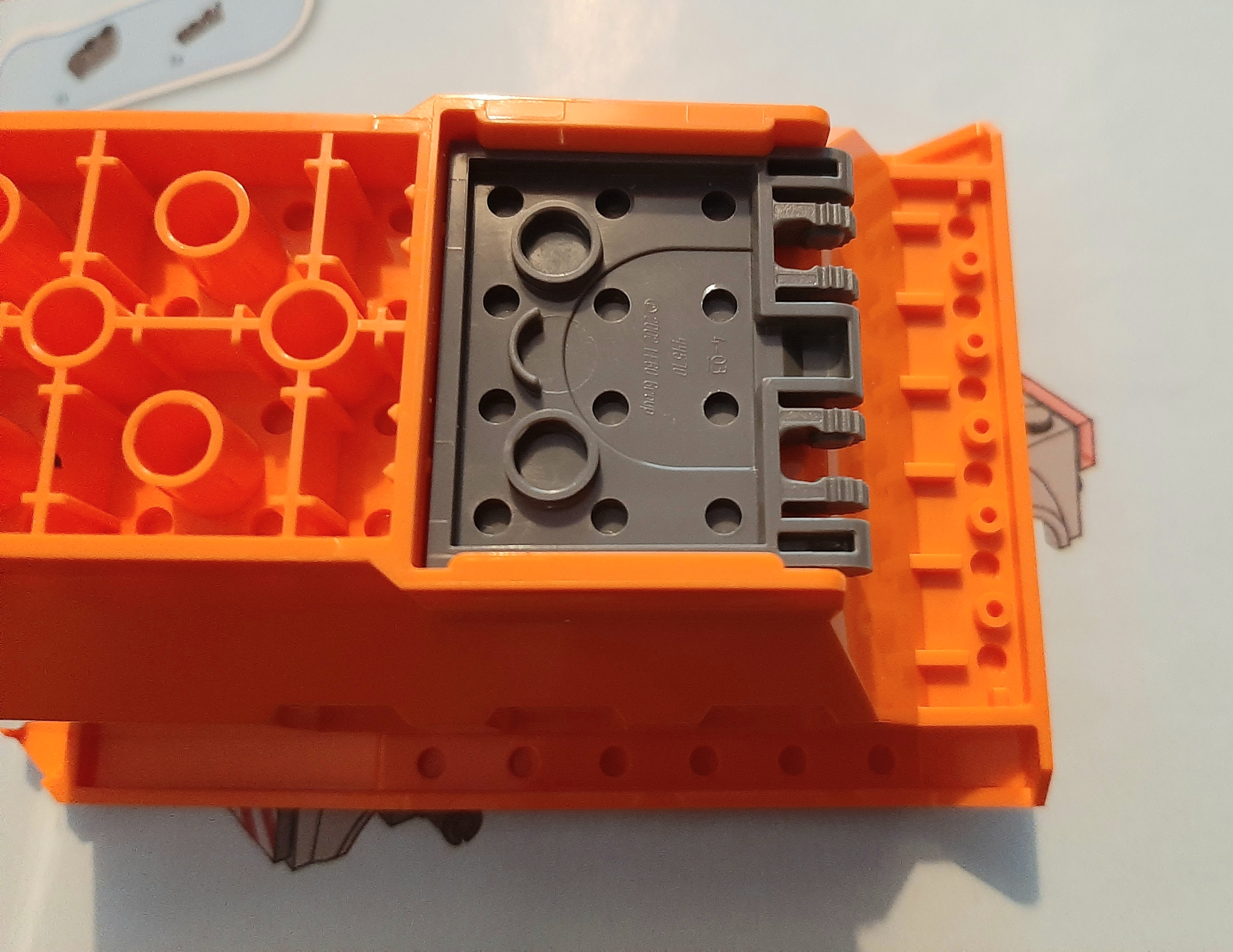 Both The large and chunky chassis, and the orange truck bed are both large, single pieces, making the construction of this set as quick and easy as advertised. 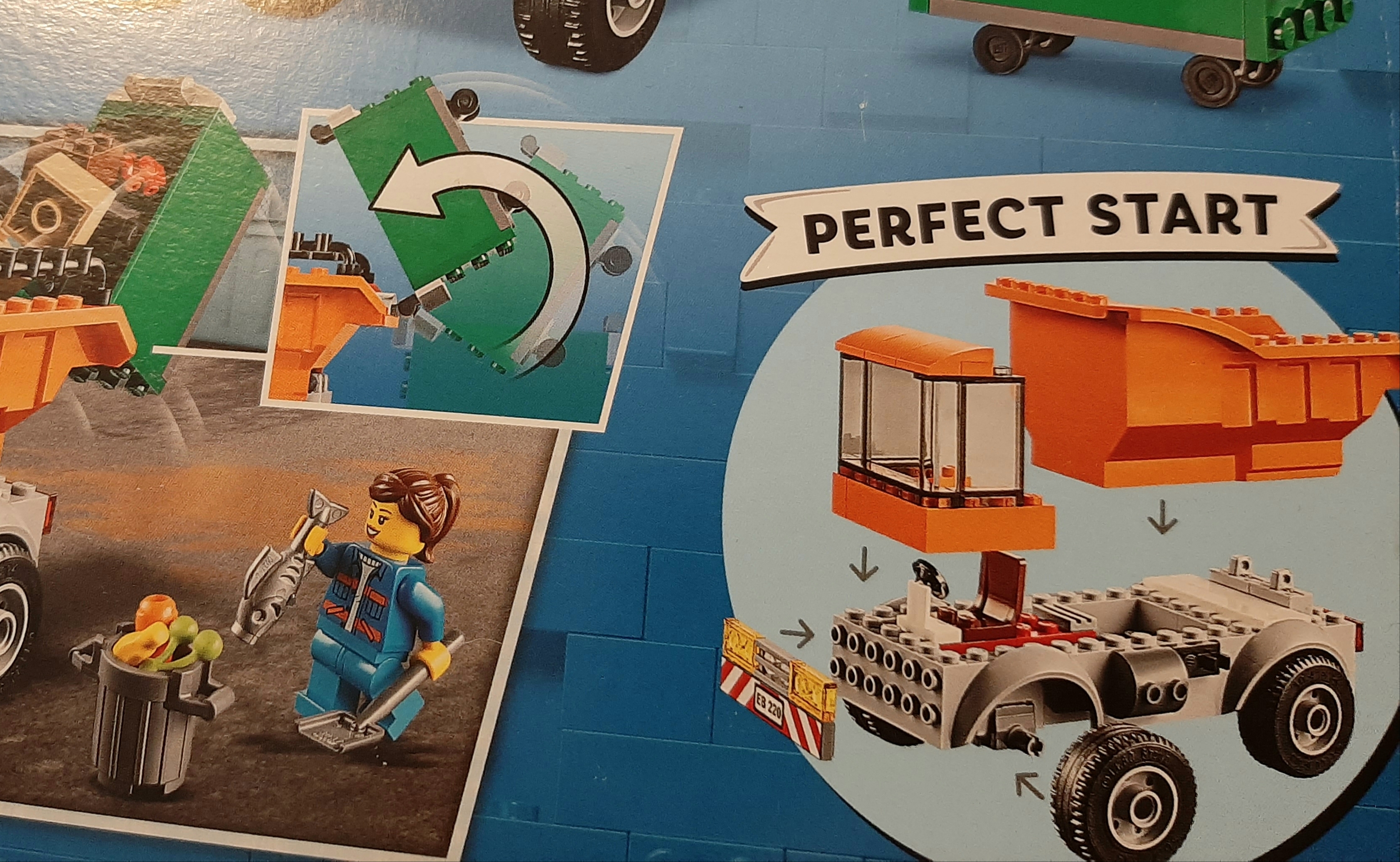 ‘Perfect Start’ states the back of the box and it rings true. There is nothing here that would cause an issue for an even the youngest members of the target age range.  For those of us who build sets regularly, you will have this set fully assembled and ready to go in under 5 minutes! Do not buy this set if you’re looking for a fulfilling build experience. 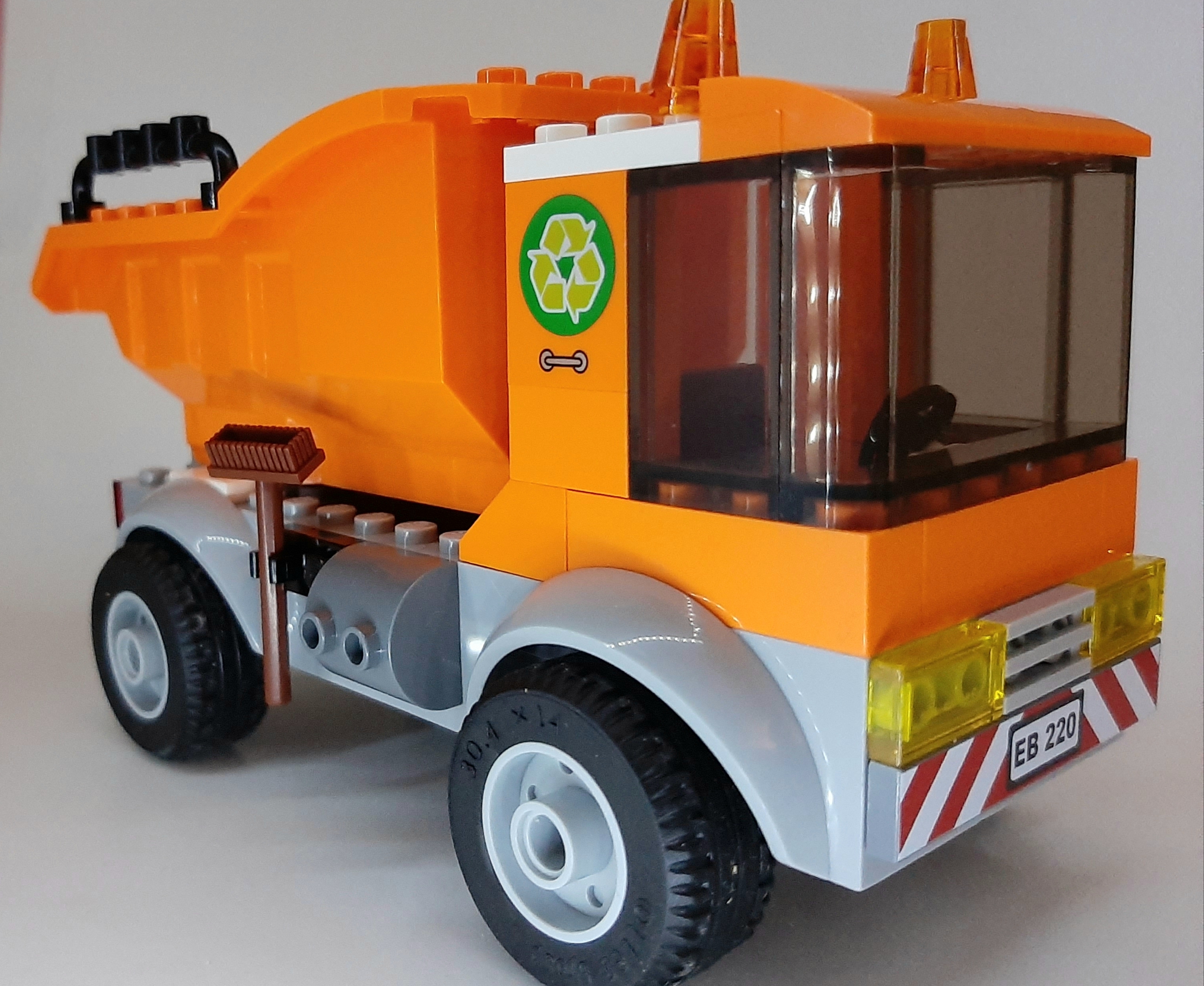 Despite it’s simplicity, there is a lot to like here, the bright orange truck itself definitely stands out and is detailed enough to blend in with other similarly scaled City vehicles. There are no stickers! all the decoration you can see here are printed pieces. 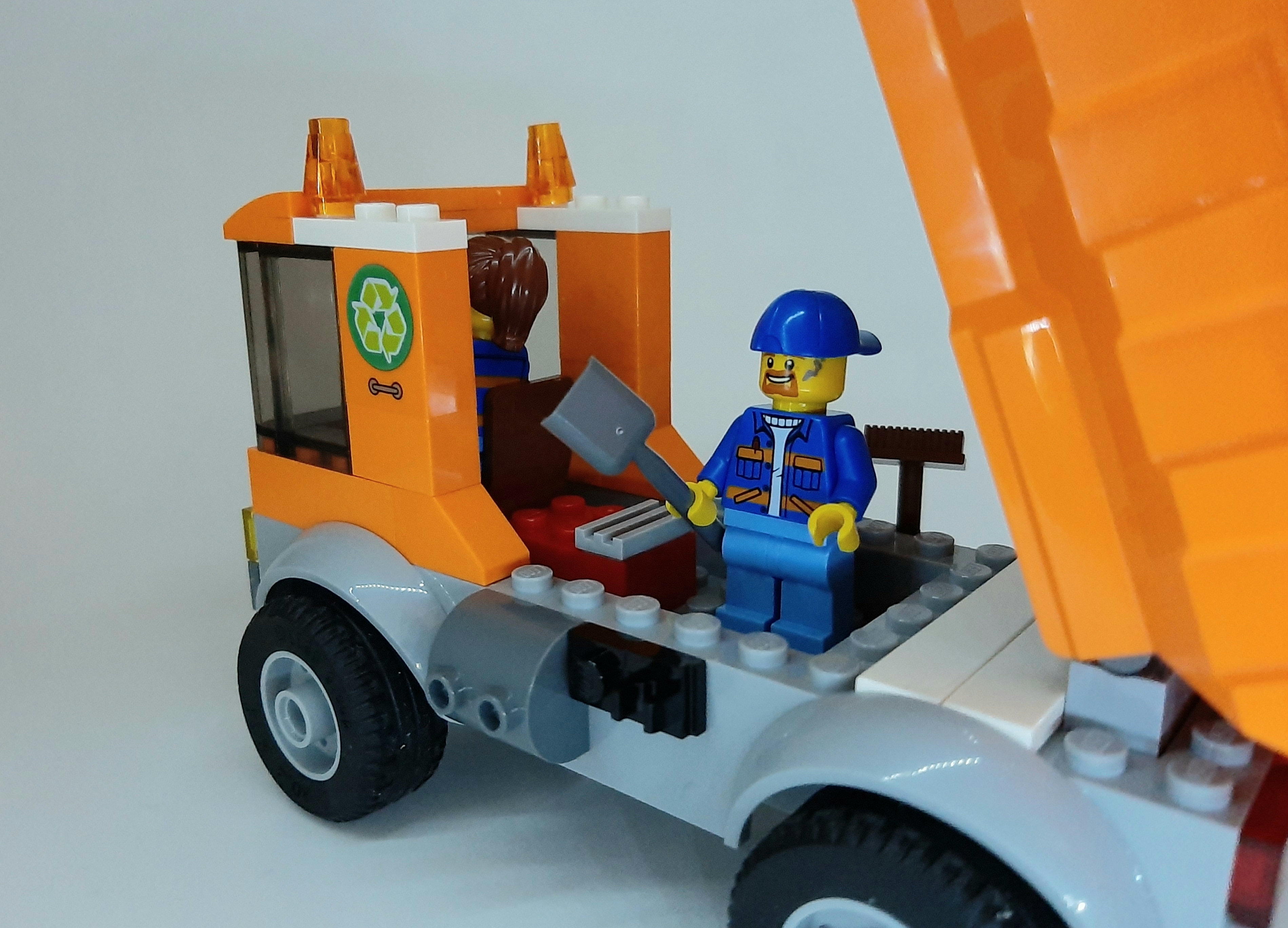 There is (of course) a drivers cab with a seat for a single minifigure, and the truck bed can pivot to empty out it’s load.

There are 2 minifigures included in the set and they are both refuse collectors with the same torso and leg pieces used for both. 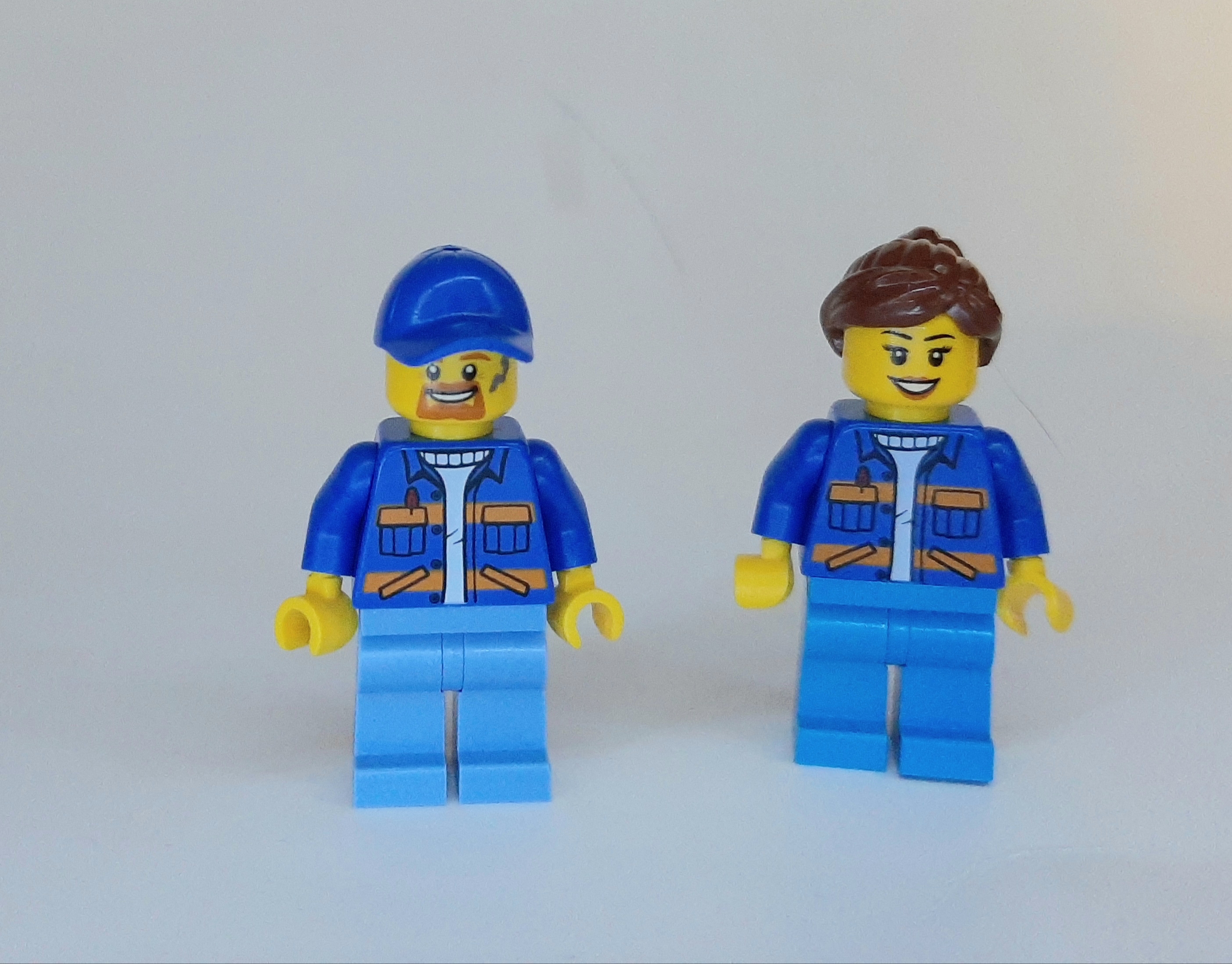 The heads are what differentiate them, the female worker comes with a brown hair piece on top of her smiling head. The male worker has a bearded face that is dirt marked, and comes with a baseball cap in the same blue as his torso. 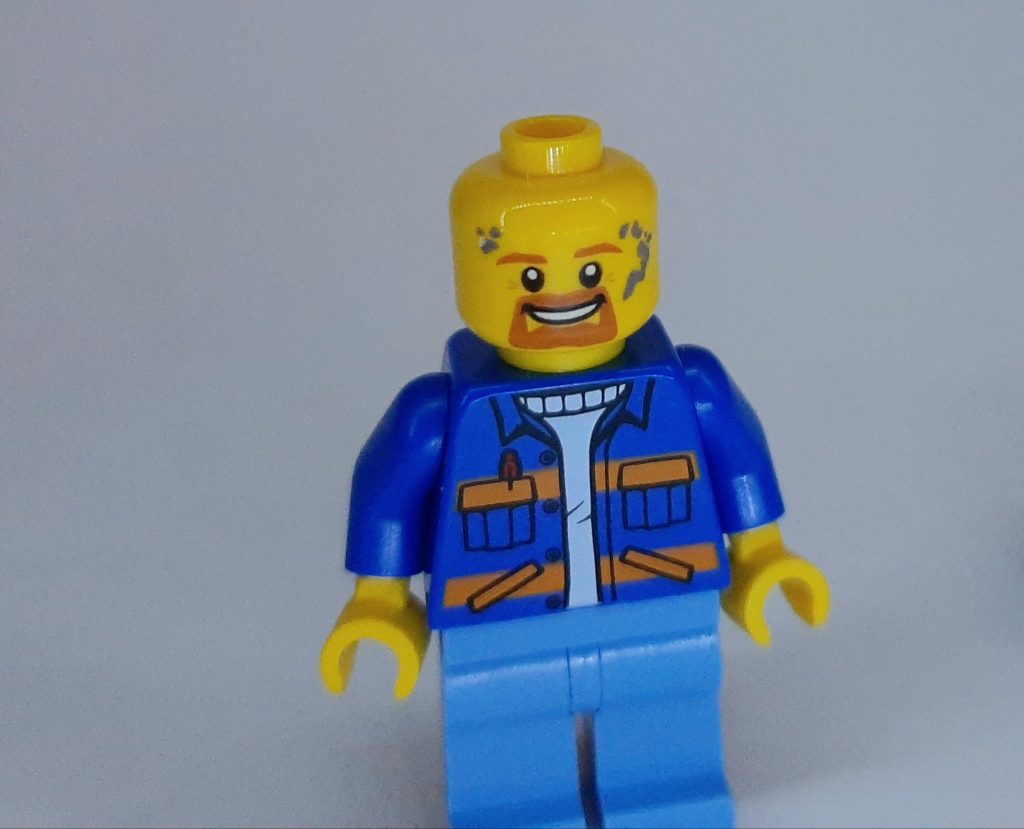 Aside from the truck itself, we have a large green recycling bin that is another simple build made up of larger pieces. We also get a few odd bricks and various pieces to fill our bin so we have something to tip into the truck bed. 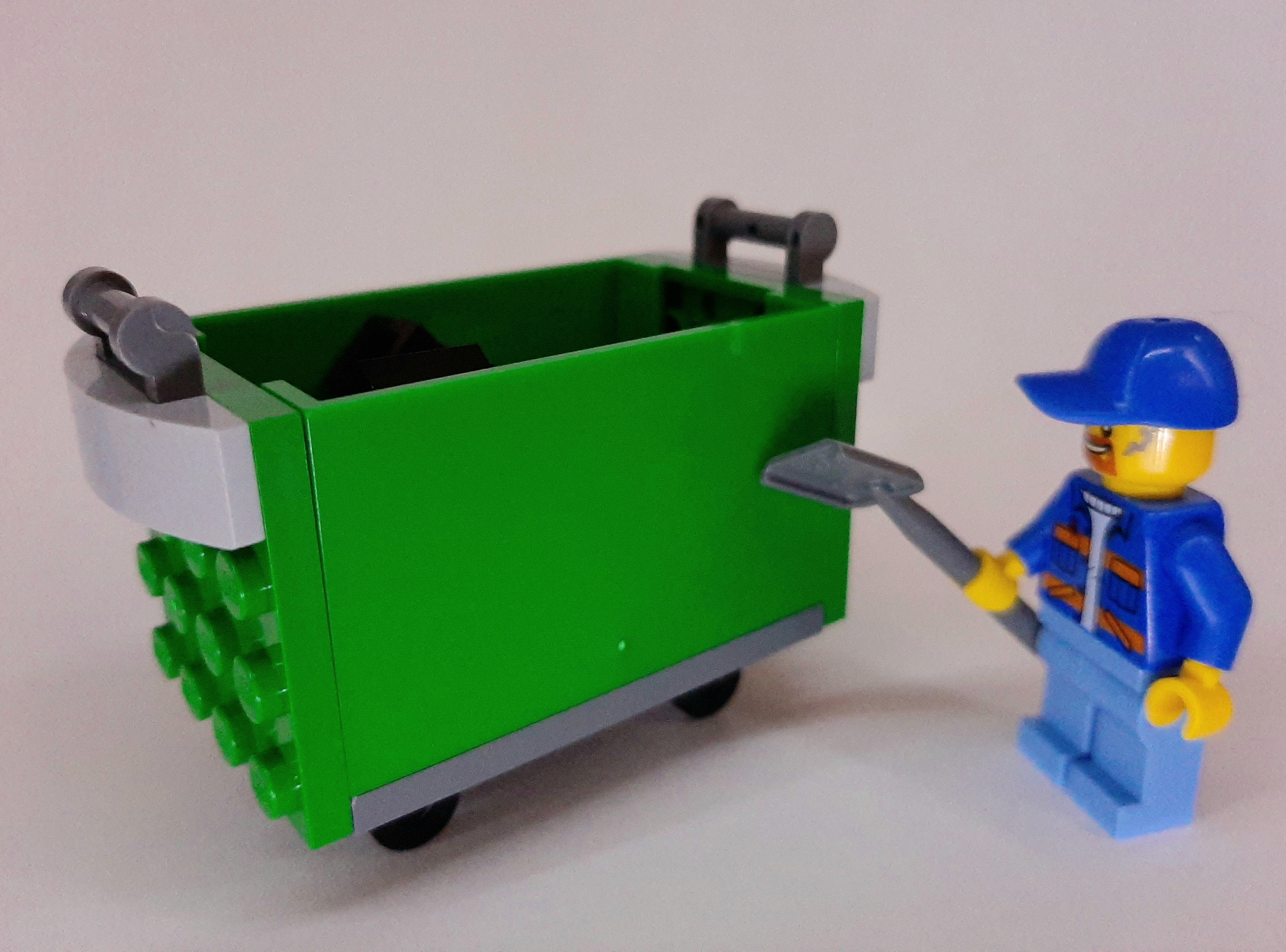 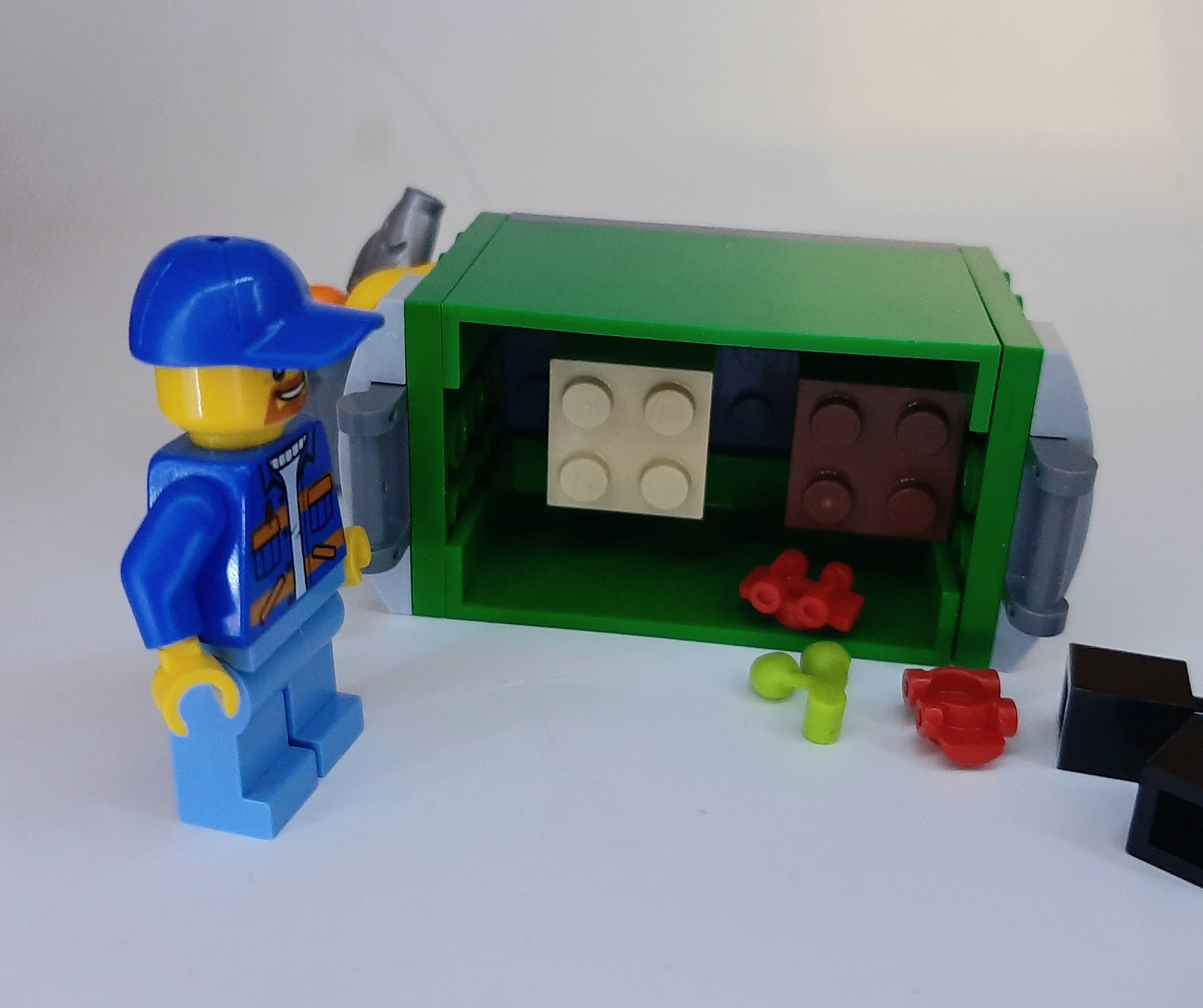 The bin can attach to the clip bricks on the back of the truck which is a nice play feature. In addition to the large bin, there is also a regular trash can Included. 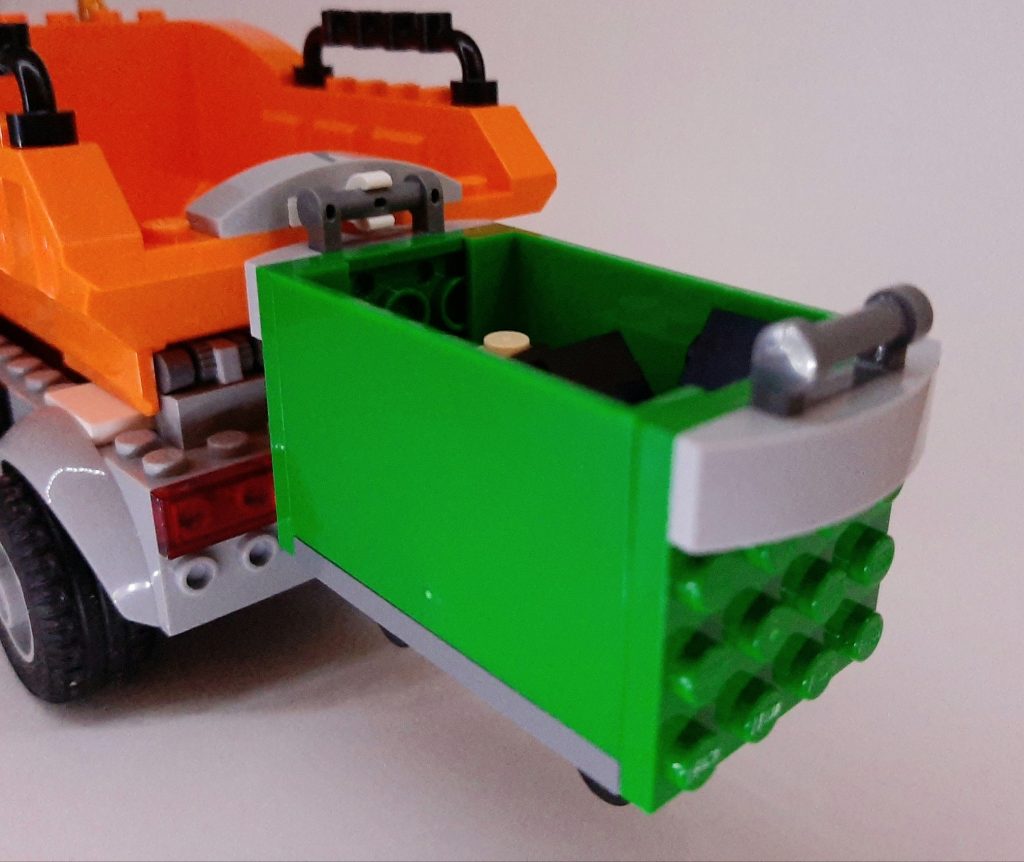 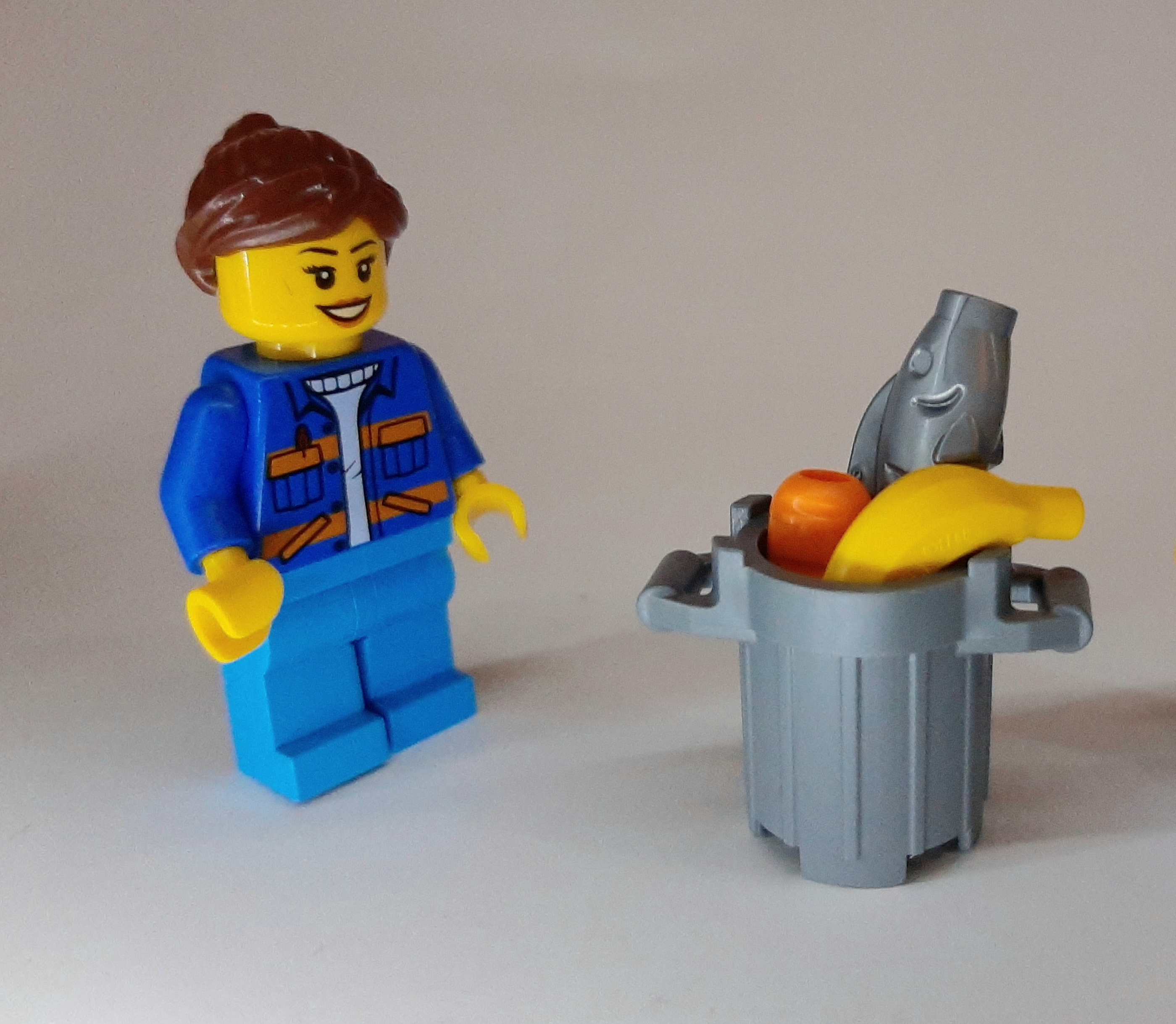 Again we get some trash for our workers to empty out, a banana, a fish, a carrot and some grapes. A nice selection! Finally, in terms of accessories, we get both a shovel and a broom included. These can be clipped on either side of the truck for easy access for our workers. 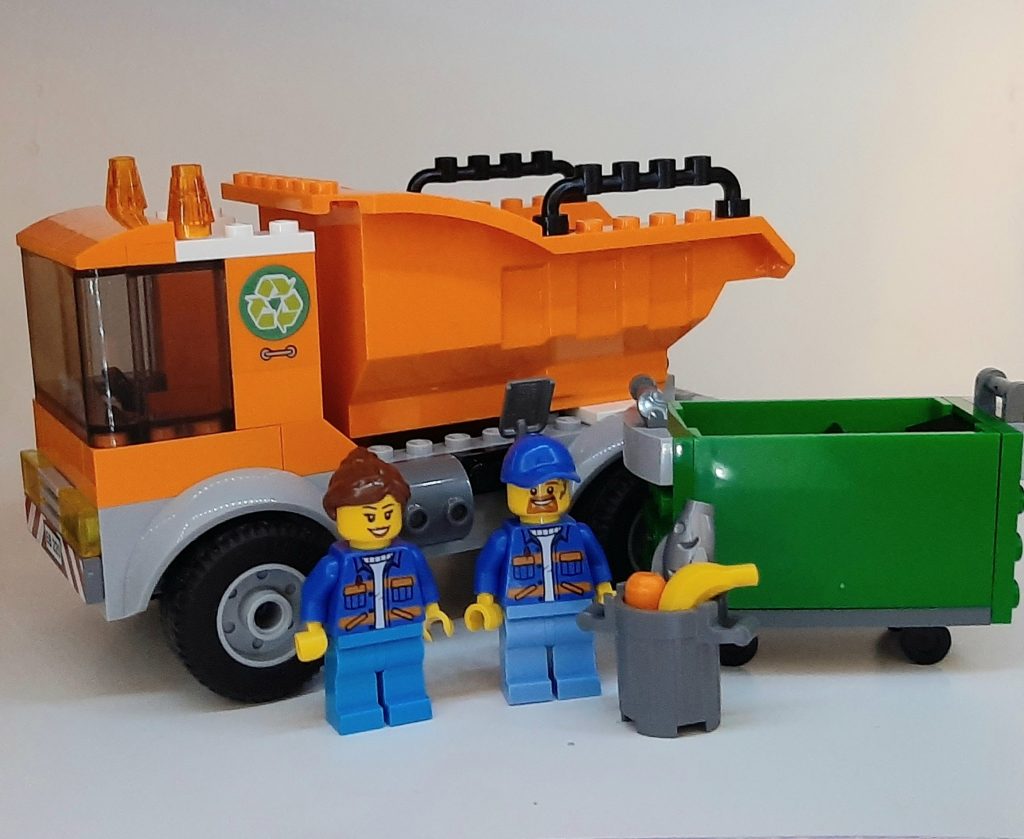 So while this isn’t the most complicated or detailed build, it has a fun factor that’s hard to resist! It will still fit in seamlessly alongside any ‘City’ themed collection. Despite the modest piece count of only 90 pieces, the final build is a nice size, and with the minifigures and accessories included here, the very reasonable price tag of just £14.99 make the set a great value proposition. 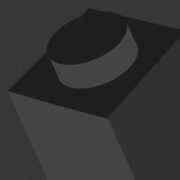