The Mandalorian TV show has been a huge hit and not just for the Disney+ platform, LEGO has also done well with the latest addition to the Star Wars Universe. Mandalorians aren’t at all new to the World of LEGO but they have recently taken off thanks to the hit show, with sets such as AT-ST Raider, brick-built Grogu, the Razor Crest, and an entire battle pack dedicated to them.

So when a new set drops its kind of a big deal, for fans, and the latest addition comes in the form of the Forge that has been seen a handful of times throughout the show.

This review is for LEGO Star Wars The Armorer’s Mandalorian Forge (75319)! 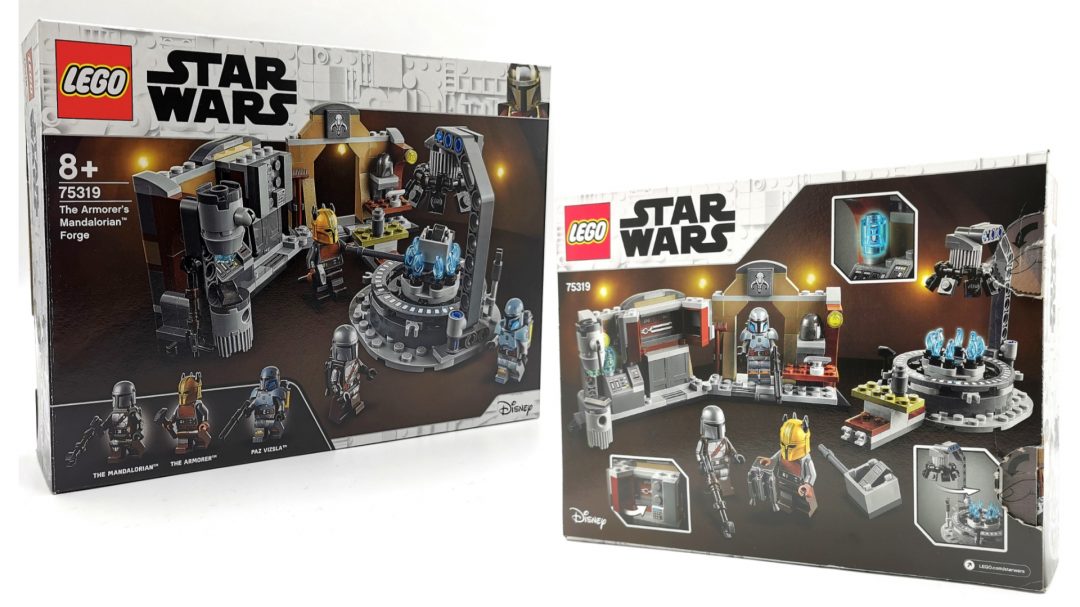 Starting with the build itself and the relatively small section of interior provided.

Again I built this, as I do most smaller set, on a live stream over on our Instagram account, and although the chat between the viewers and myself was amazing, the set still felt lacklustre and didn’t generate any questions or interest. I must say that whilst building it I felt that this is possibly the worst set of the Year, in my opinion. 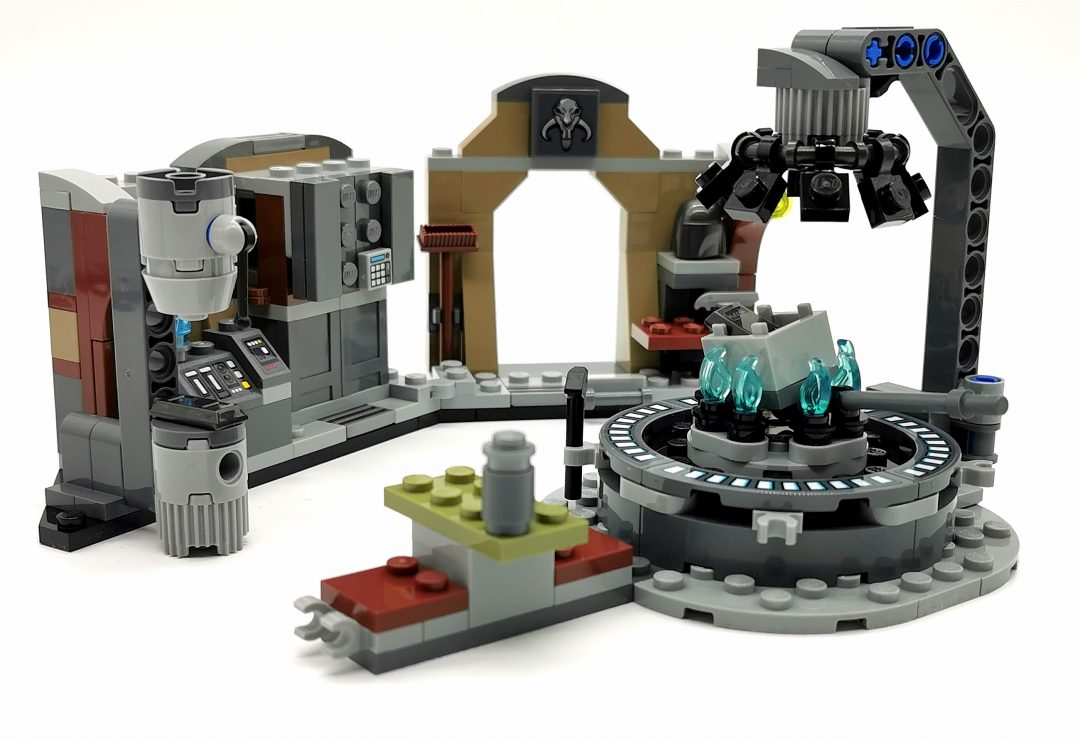 Don’t get me wrong the pieces included and used are great and the variety is good, with a handful of blue flames, tan bricks, olive plate, and some tiles, you can’t go wrong.

There’s only one real play feature and that’s the swivelling Forge arm. I’m trying to cast my memory back to the TV show and whether or not the onscreen counterpart moved in the same way, but can’t recall it doing so. 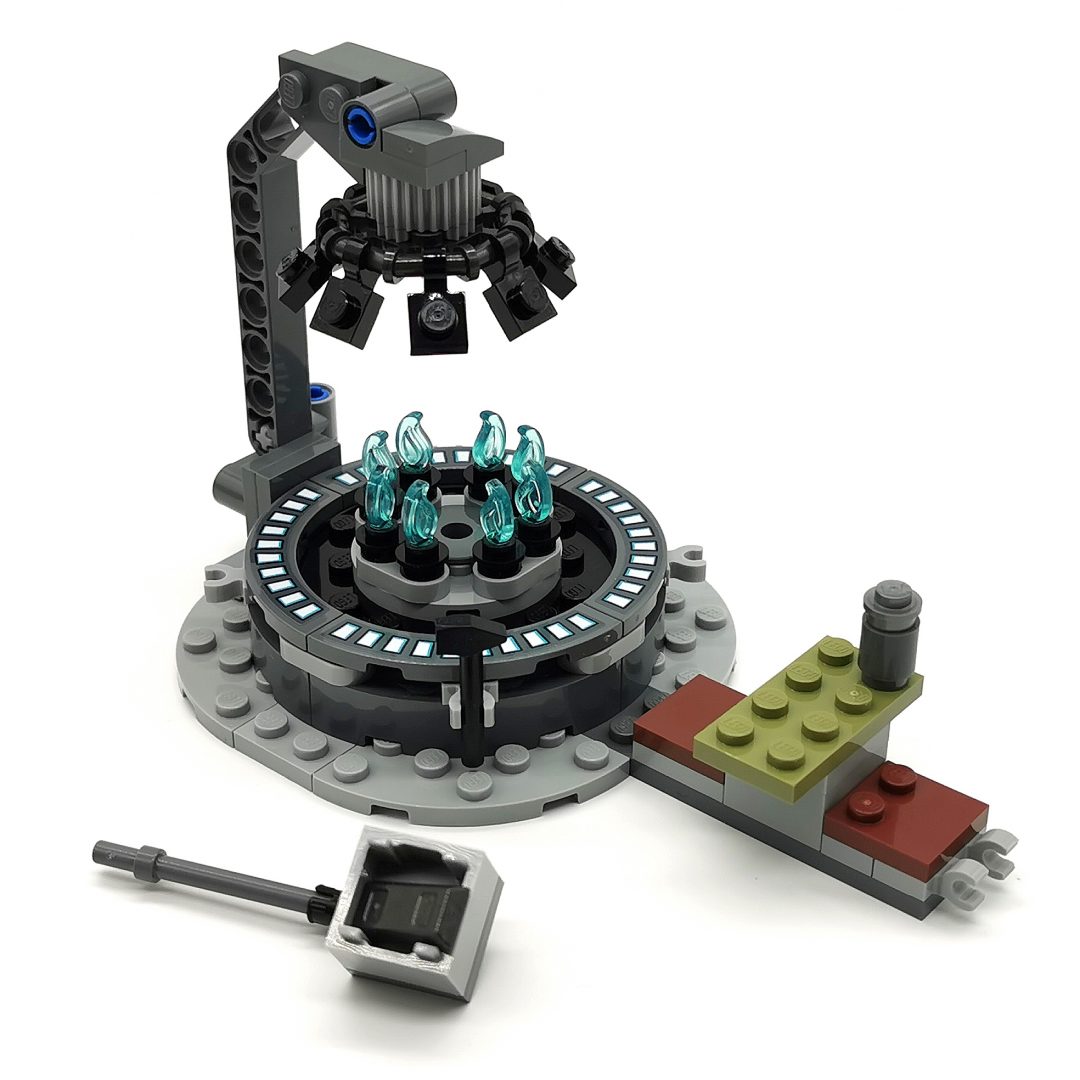 Included in the set are a bunch of stickers that could have easily been prints, although with a set this small and affordable the stickers make sense. The four parts I wish had prints are the larger curved elements that surround the fire pit, they’re weren’t too tricky to attach but there is certainly a lot more room for error.

Situated in one of the alcoves is some sort of cupboard, but the doors don’t open without being lifted off the studs they’re attached too, which in turn hides one of the stickers (a wall of tools), adding a couple of hinges here would have made perfect sense. 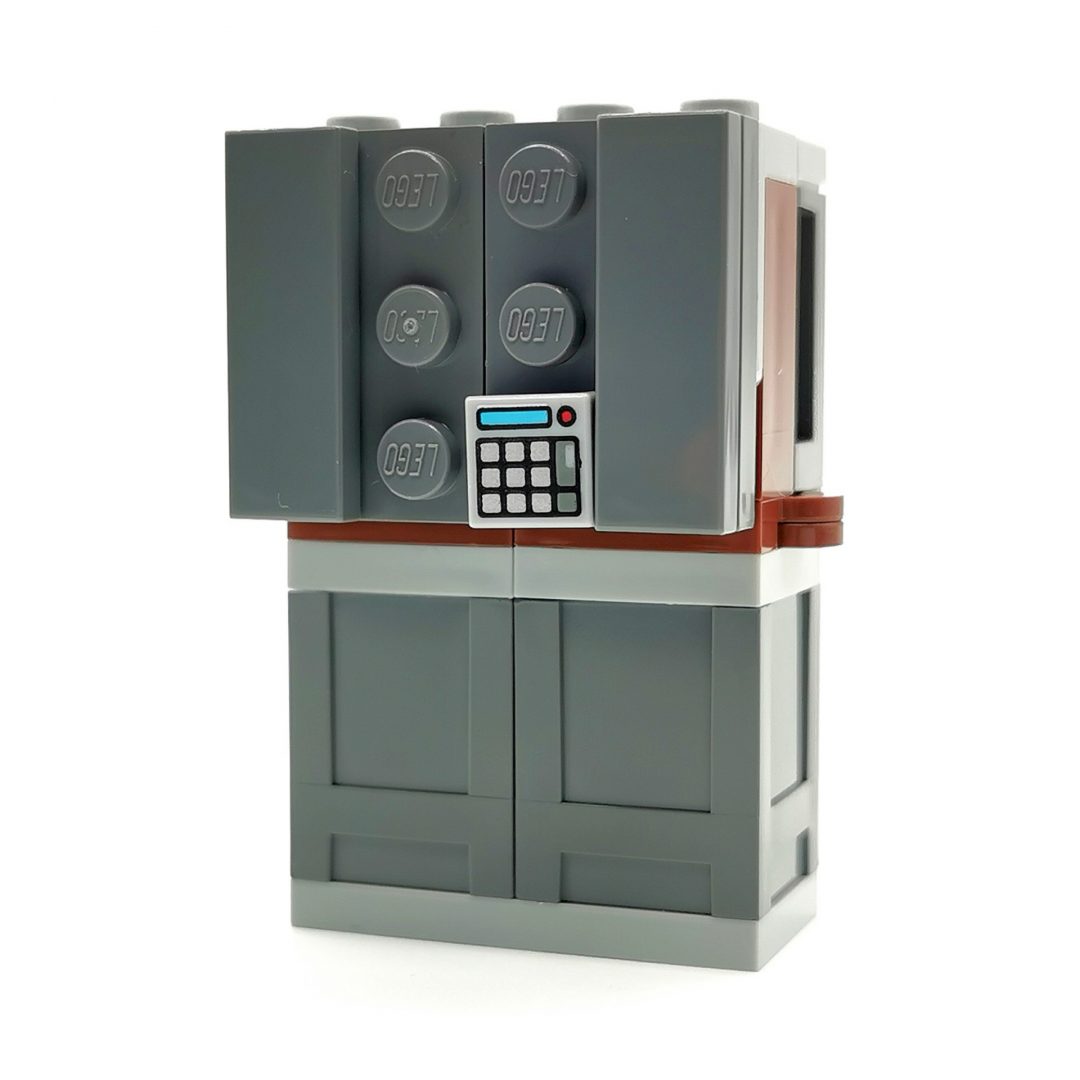 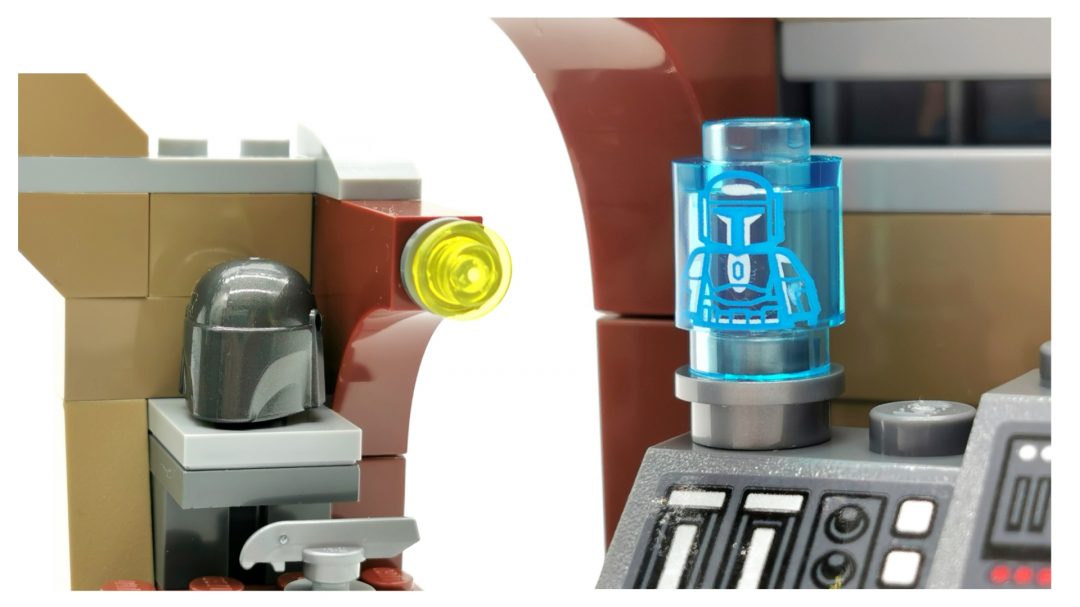 Again the actual main build is rather lacking and will ultimately be the sets downfall, coming in at £27.99 it’s not really worth it in my hoesnt opinion, it’s better suited and somewhat similar to a glorified Battle Pack and would have better priced around the £20 mark.

If there were clear signs of an expansion or addon element, similar to the smaller LEGO Harry Potter sets, then that would have made more sense and possibly worth the cost, but as it stands I wouldn’t recommend it. 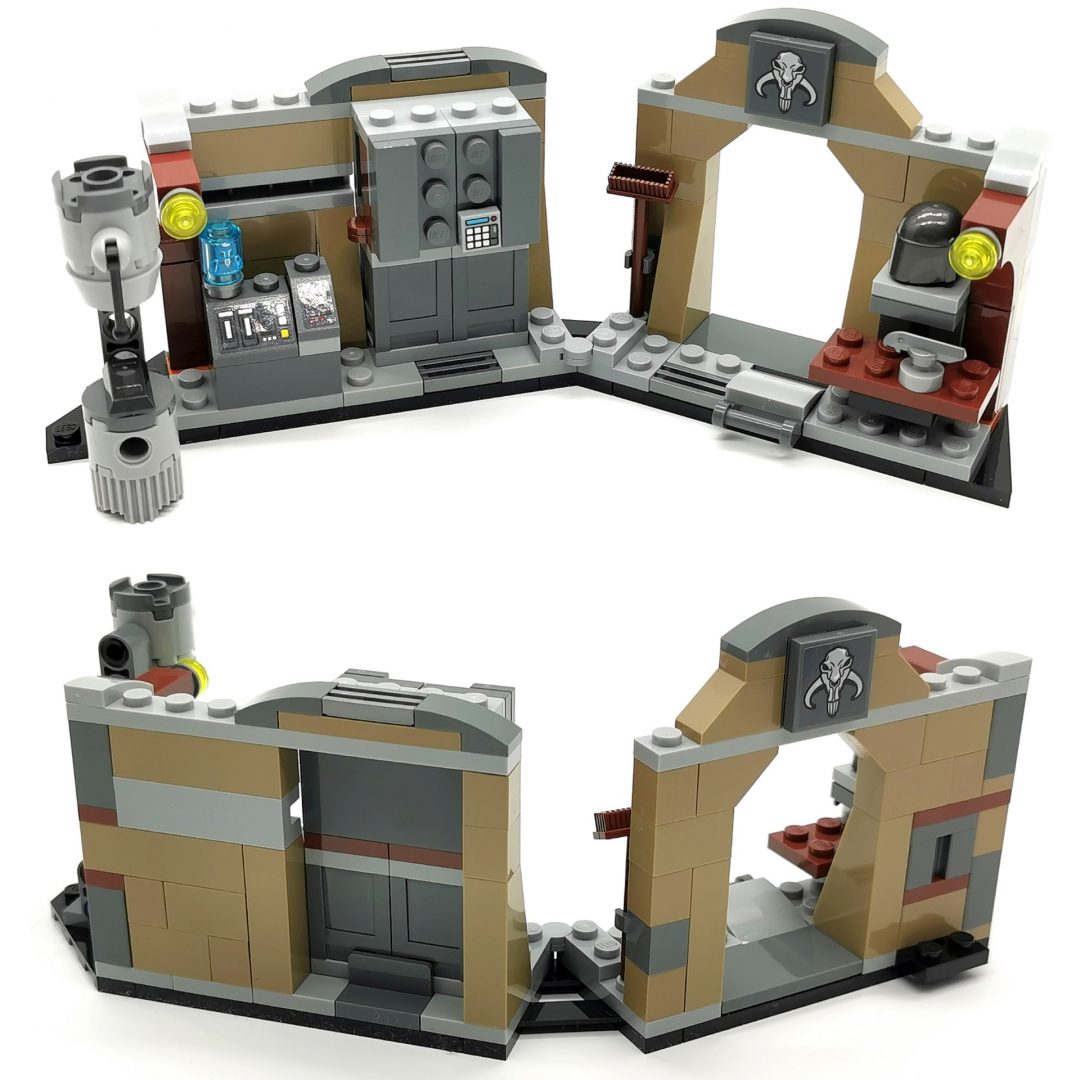 This is where I back track and undo what I’ve said above, as the Minifigures are the main draw and make this set worth getting!

We’ve already had a Din Djarin (Mandalorian) Minifigure but this one has a matching Jetpack accessory, which looks great when combined. 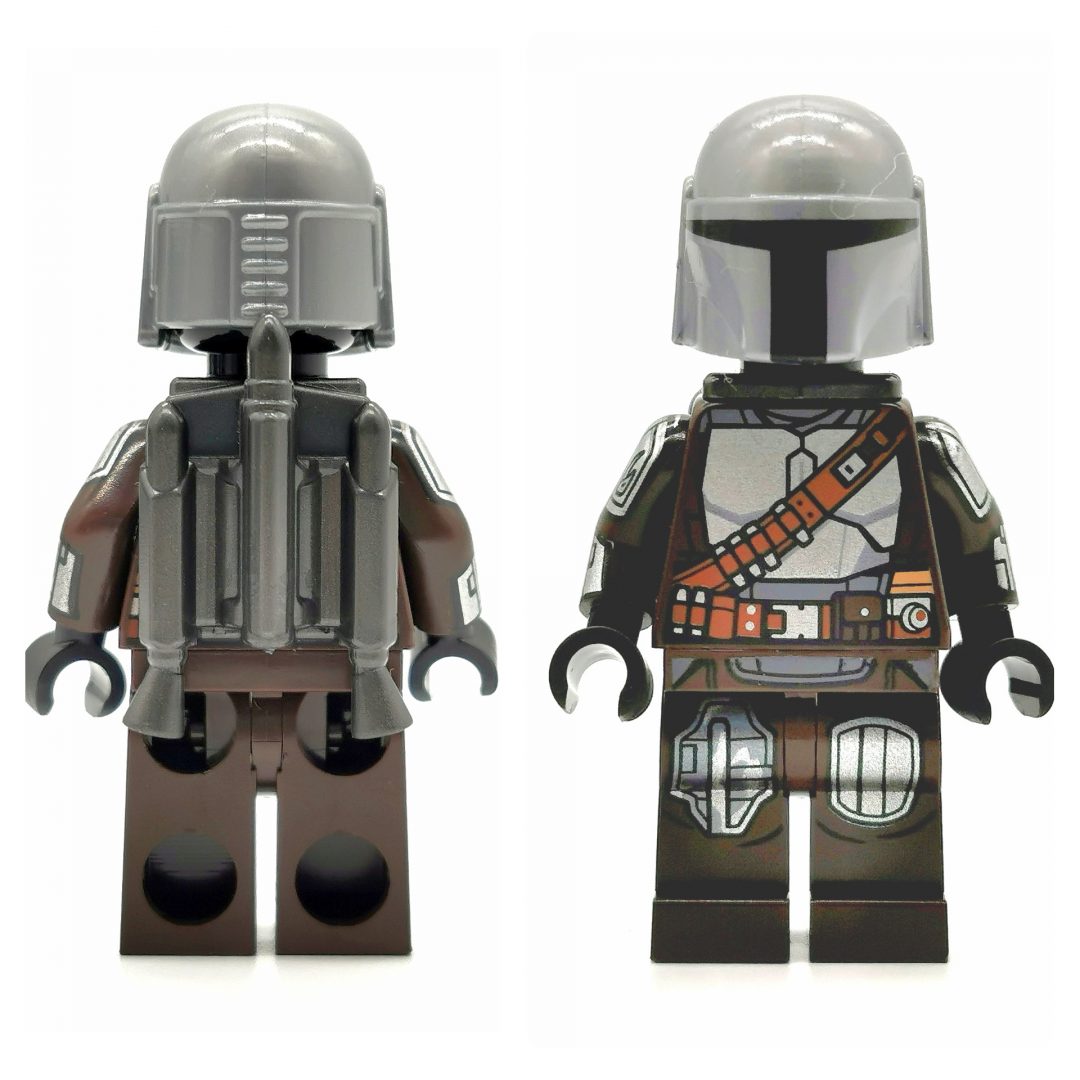 The other two Minifigures are what pushes the set just that little bit further and makes it worthwhile picking it up. Starting off with The Armorer, and in part the cool new nelmet mould.

This new helmet piece is amazing and really looks nice paired with a Mandalorian’s armour torso and legs, with the three horns, yellow/gold colour, and black accent lines, it really does look badass!

Both the torso and legs are also exclusive to the set, the design and printing on each is crisp and detailed, it’s a real shame that no arm prints were included, it would have helped the set just that little bit more. 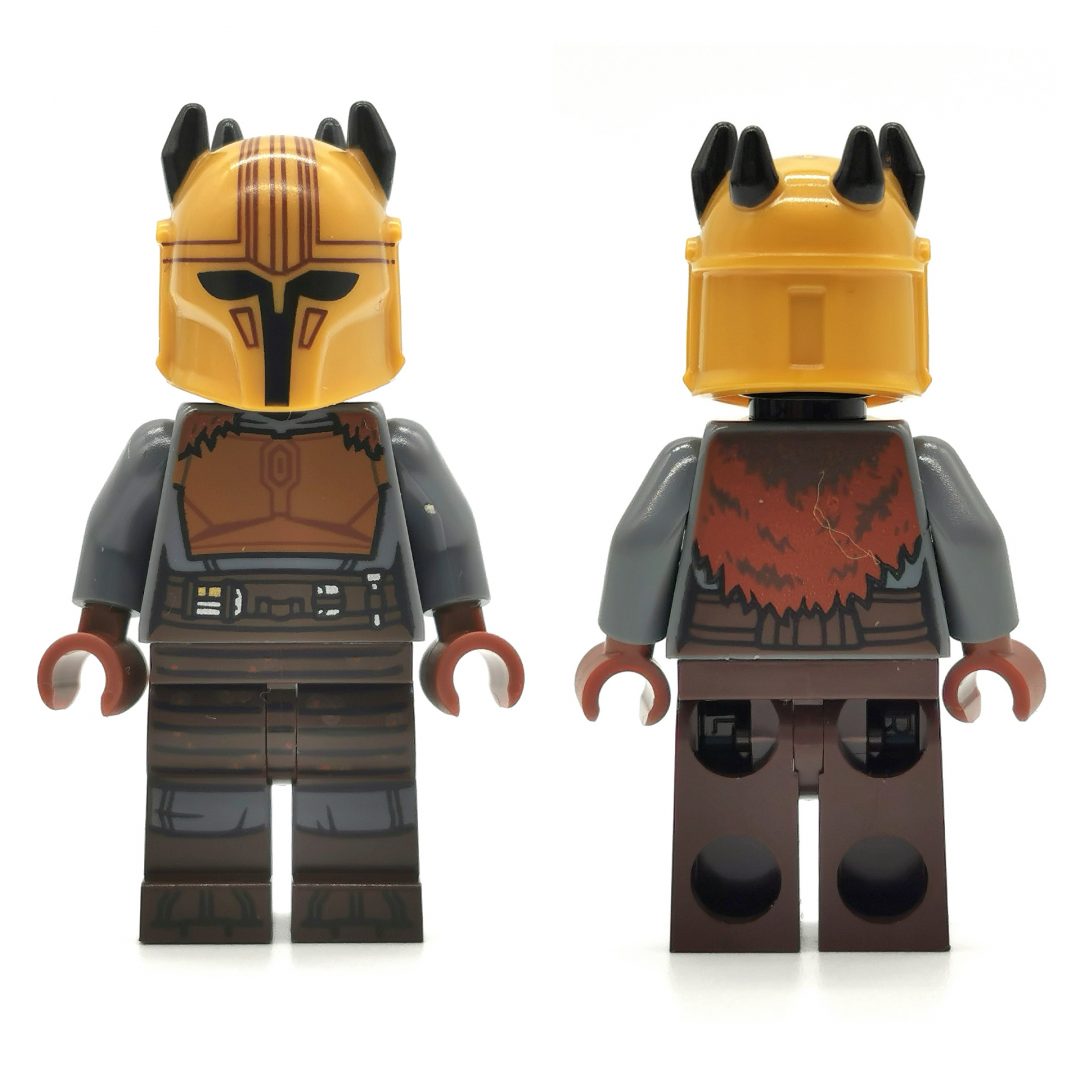 The third Minifigure included actually has a name, Paz Vizsla, and boy does he look cool. He comes with an added armour accessory that slips over the neck stud. It could also double up as an American Football shoulder guard.

The armour piece is new as well as the design and printing on it, which features a pocket or two and a few buttons. You can find similar designs on both the torso and legs and I must say it looks incredible, and Paz Vizsla has to be my favourite from the set.

The helmet is also exclusive to this set and matches the colours of the Minifigure well, being Sand Blue is also nice and makes for an interesting palette choice, not often seen on a Mandalorian. 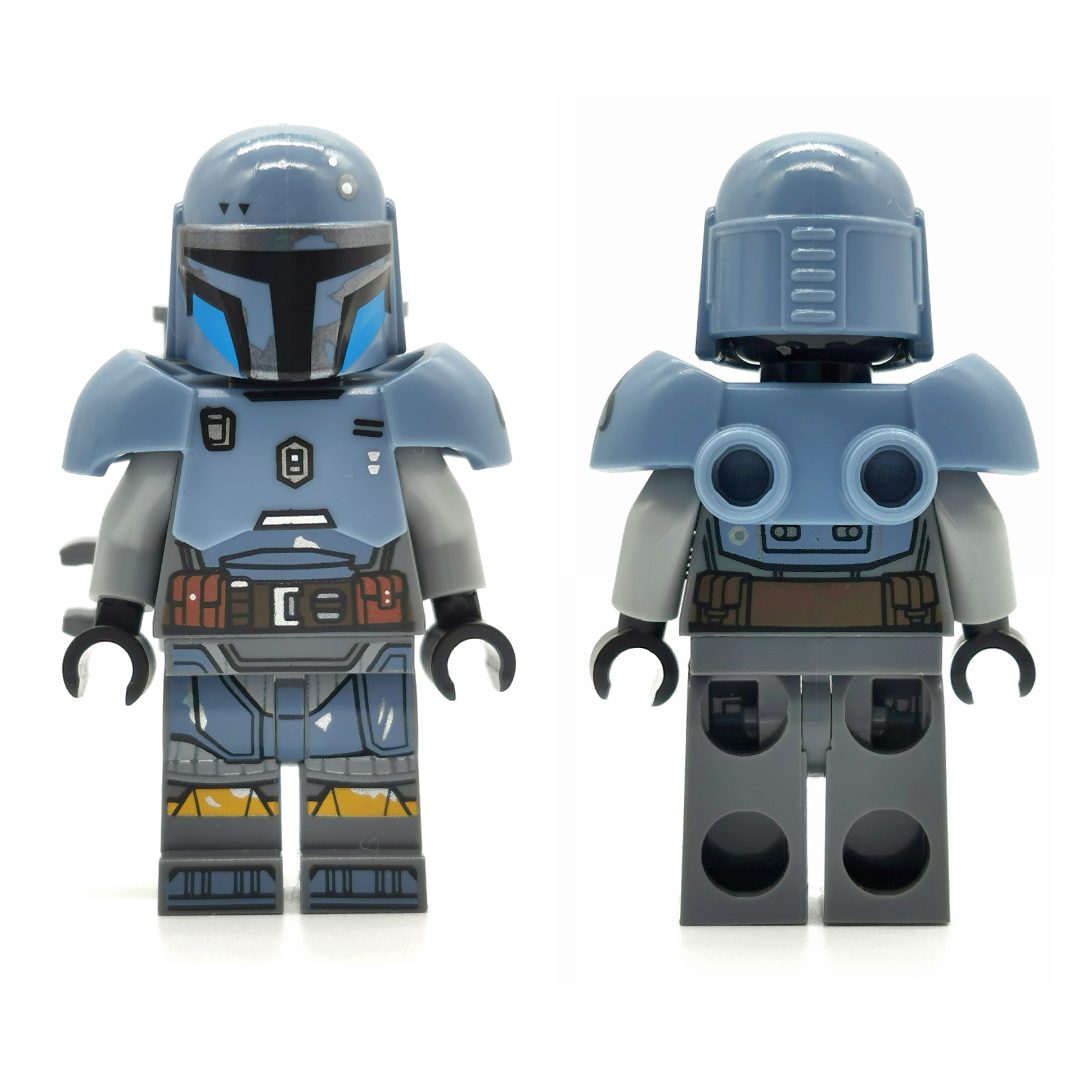 Overall the set is lacking in the build department and isnt really worth picking up based on that alone, however chuck in the Minifigures and you have a reason to grab it and be excited.

There are some good points to the build but they’re very tiny in the grand scheme of things. Such as the printed 1×1 cylinder Brick that features a generic Mandalorian hologram and the sticker sheet which has a few cool Mandalorian and control panel designs.

The three Minifigures are exclusive to this set, The Mandalorian (Din Djarin), The Armorer, and Paz Vizsla. All three are quite the sight and look fantastic together or posed in a scene. I must get for any and every LEGO Star Wars fan! 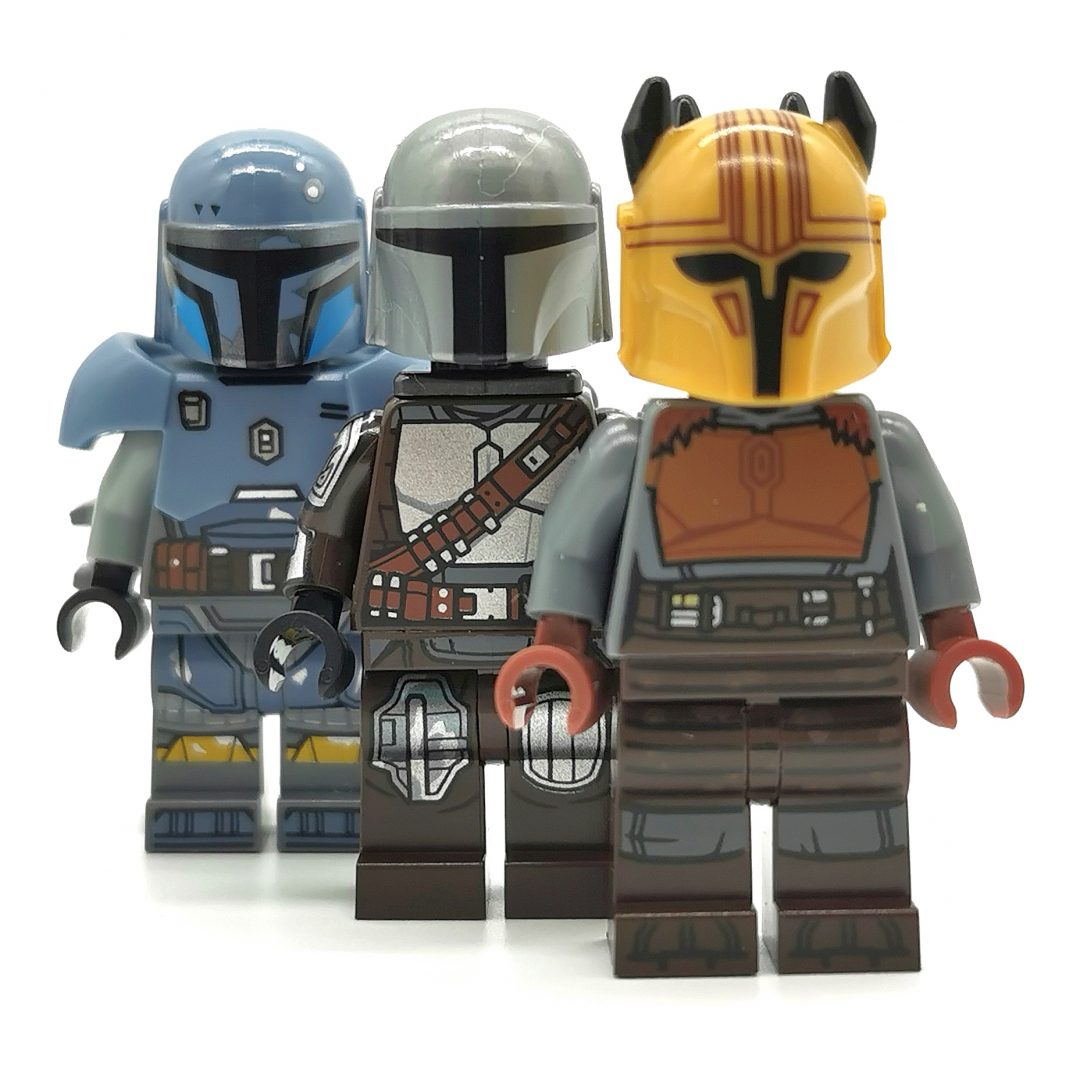 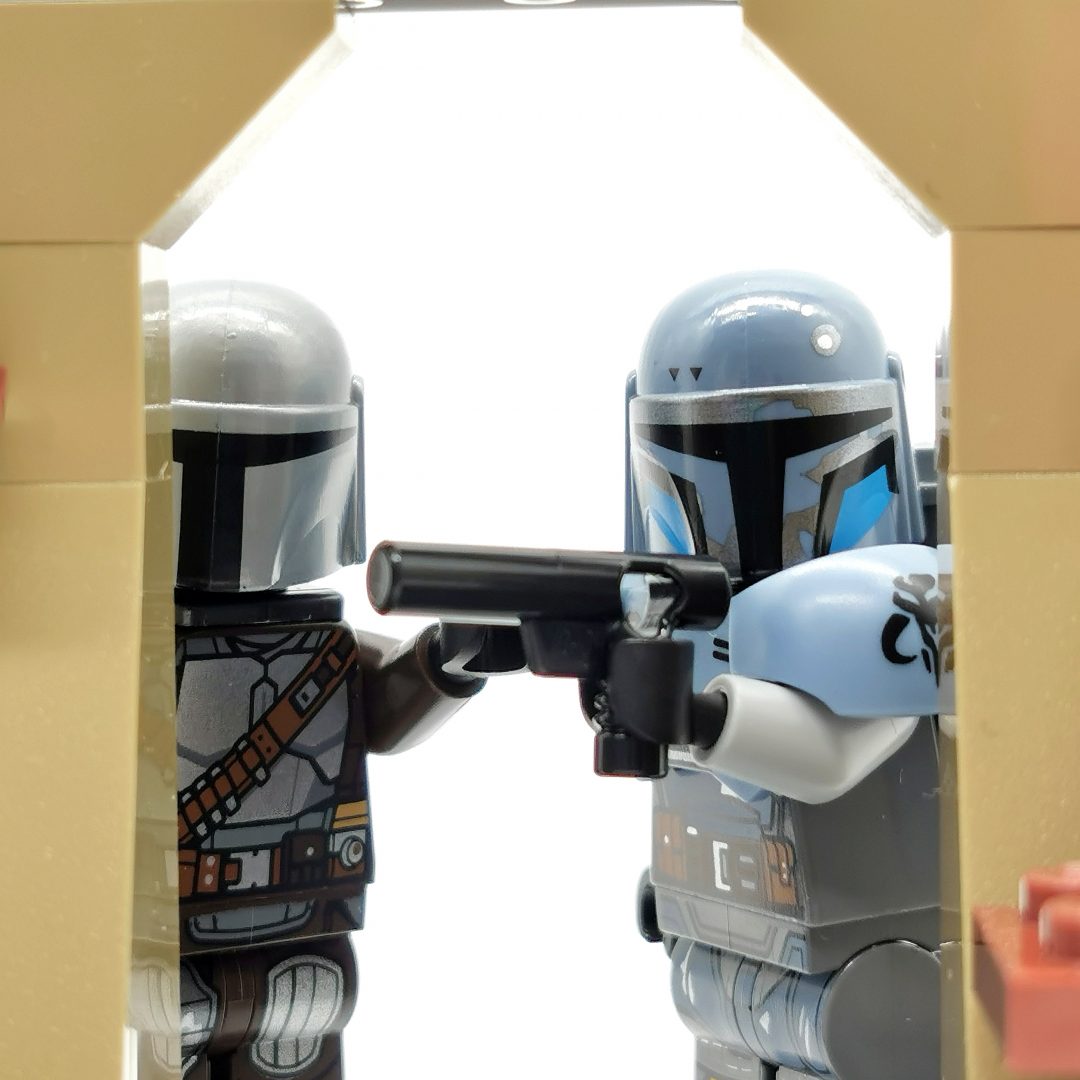 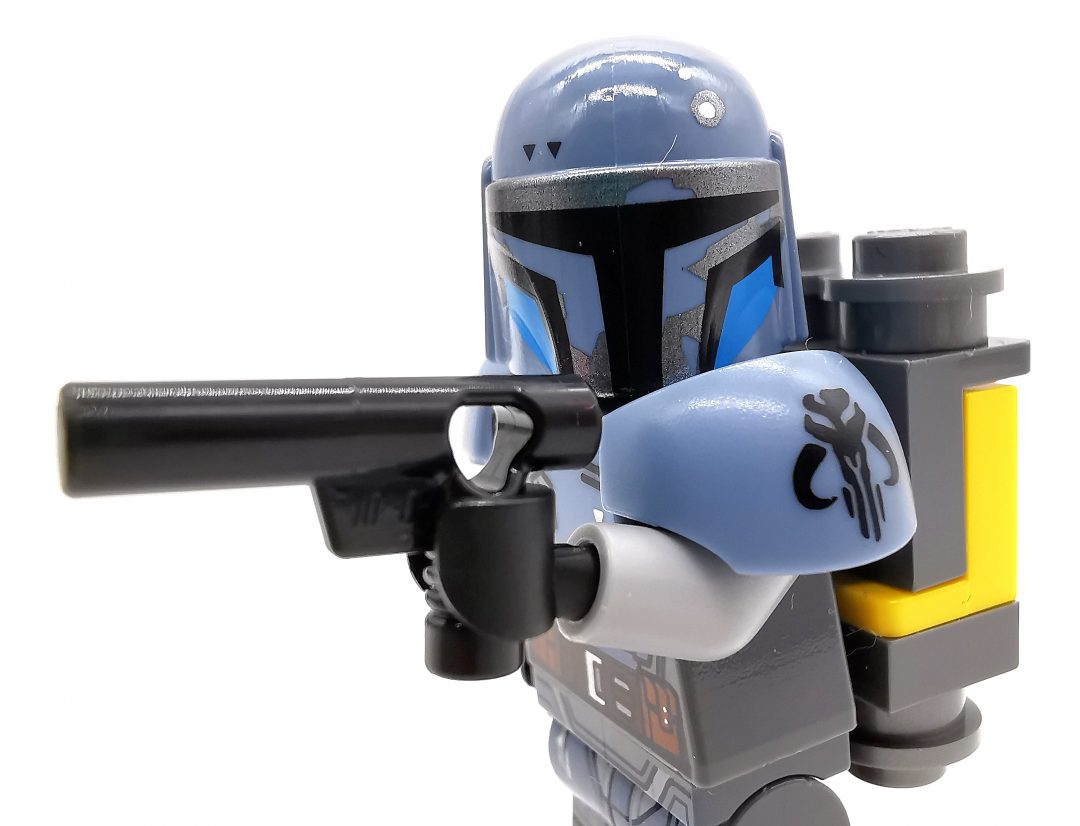 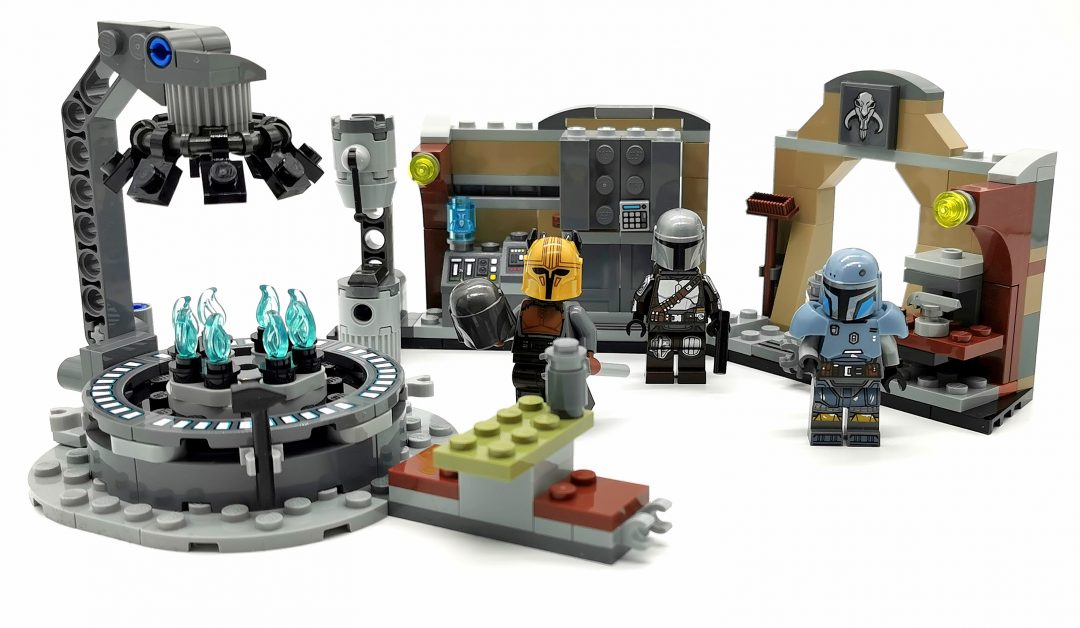 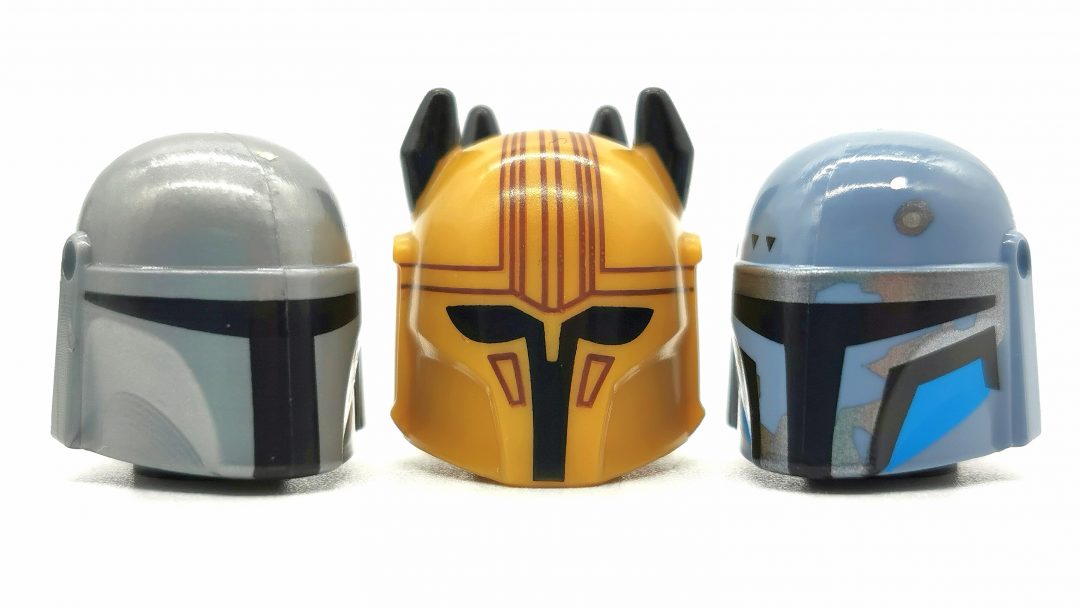 Thank you for reading our review of LEGO Star Wars The Armorer’s Mandalorian Forge (75319), we really appreciate your time. Please let us know in the comments below how we did and if you agree or disagree with our views.

You can rewatch our live stream here. 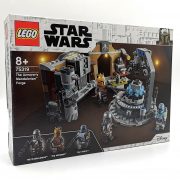 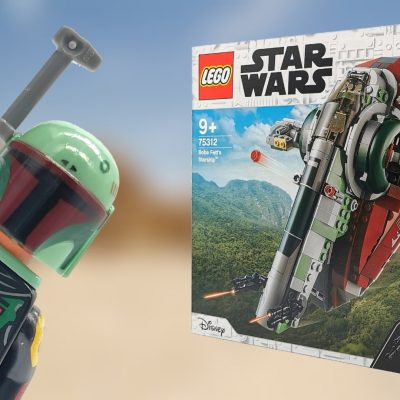 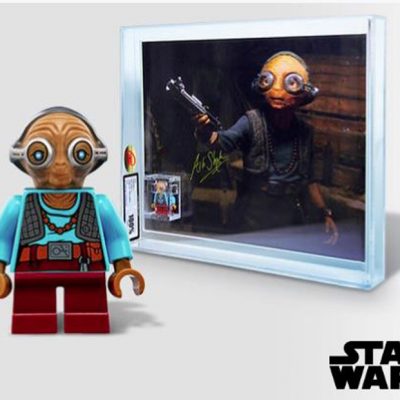