When it comes to Marvel and the MCU you can count on LEGO to make a set based on whatever is due out at the time, there are a few exceptions, these are the ones that surprise us, although these particular Mechs were supposed to launch 1st January, they got pushed back due to shoddy design/building errors. Jump to four months later, we finally have them!

Being a big Marvel fan in general and a keen LEGO Minifigure collector, these were a no-brainer and ones I needed day one, if only for the Minifigures.

This is the third wave of LEGO Marvel Mechs, joining the ranks which already consist of an incredible lineup, Captain America, Thor, Miles Morales, and  Thanos to name but a few. So withlut further a-do let’s get into the review.

Coming in at just £8.99 each these are great little sets and perfect for gifting young and old alike, without breaking the bank. The box designs make these standout on the store shelf and really grab your interest. Each box has a Mech on the front in a very similar pose to one-another, the backgrounds are also almost identical giving off a ‘whooshing’ effect of them moving fast or powering up.

Inside each of the boxes you’ll find unnumbered bags and very small instruction manuals, oh and a sticker sheet in the Iron Man box, he’s the only one that comes with a selection of stickers, albeit small. 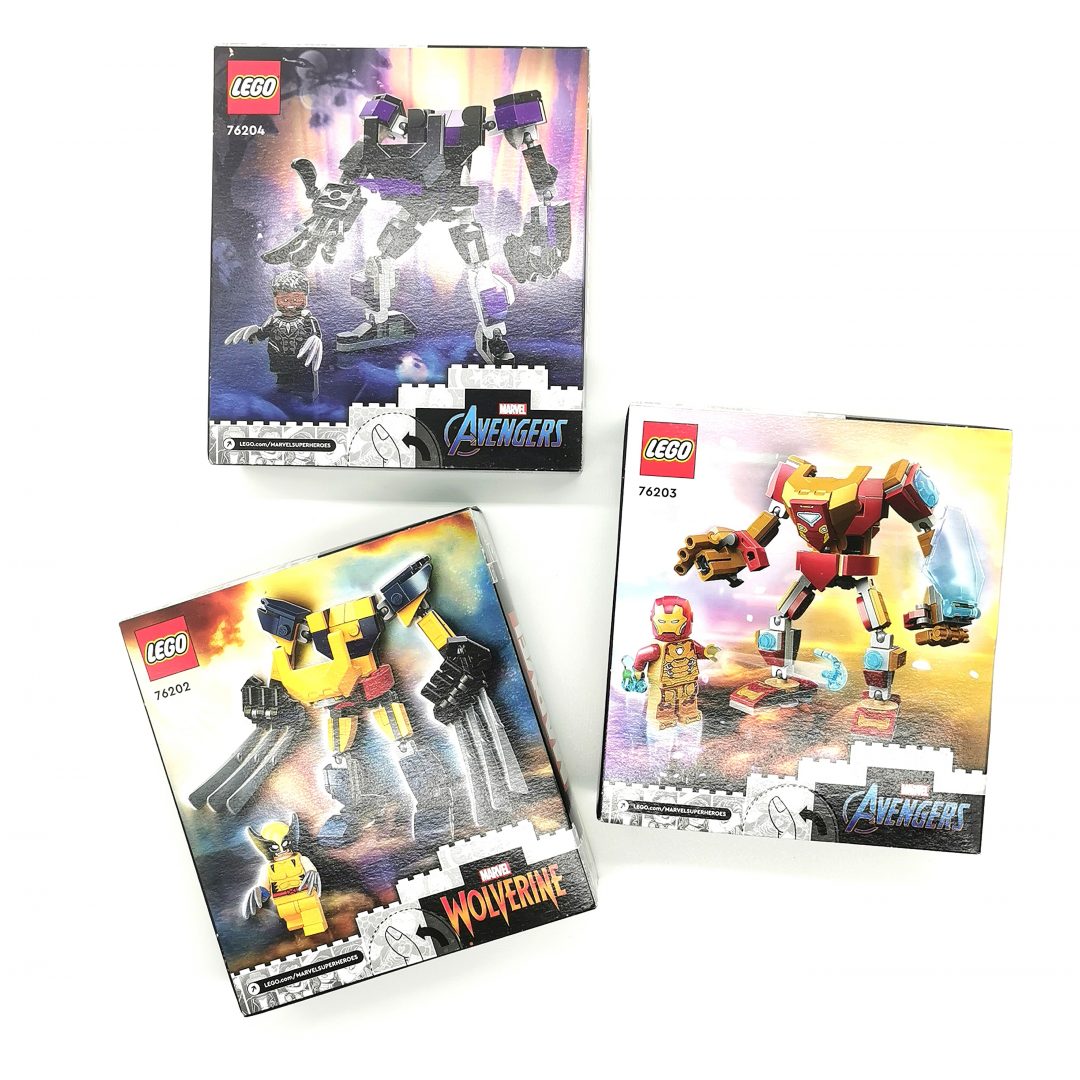 If you’ve built any of the previous Marvel Mechs then you’ll know that the builds techniques are generally the same, with the bodies and limbs being constructed almost identical to each other, give or take a few bits of course, depending on the way the hands are done or the weapons that are included.

Each one starts off the same as you build the torso and where the Minifigure sits, being held in place by a unique and special modified tile/brick.

There are a few printed parts with each set having at least one. Black Panther has a printed 2×2 slope tile, Iron Man has his Arc Reactor on a 2×3 shield piece, and Wolverine has the X-Men X on a 2xw round tile. The inclusion of these designs and printed piec2is great for such a small collection of sets and I wasn’t really expecting there to be any. Iron Man comes with three stickers also that go on his feet and his right hand. 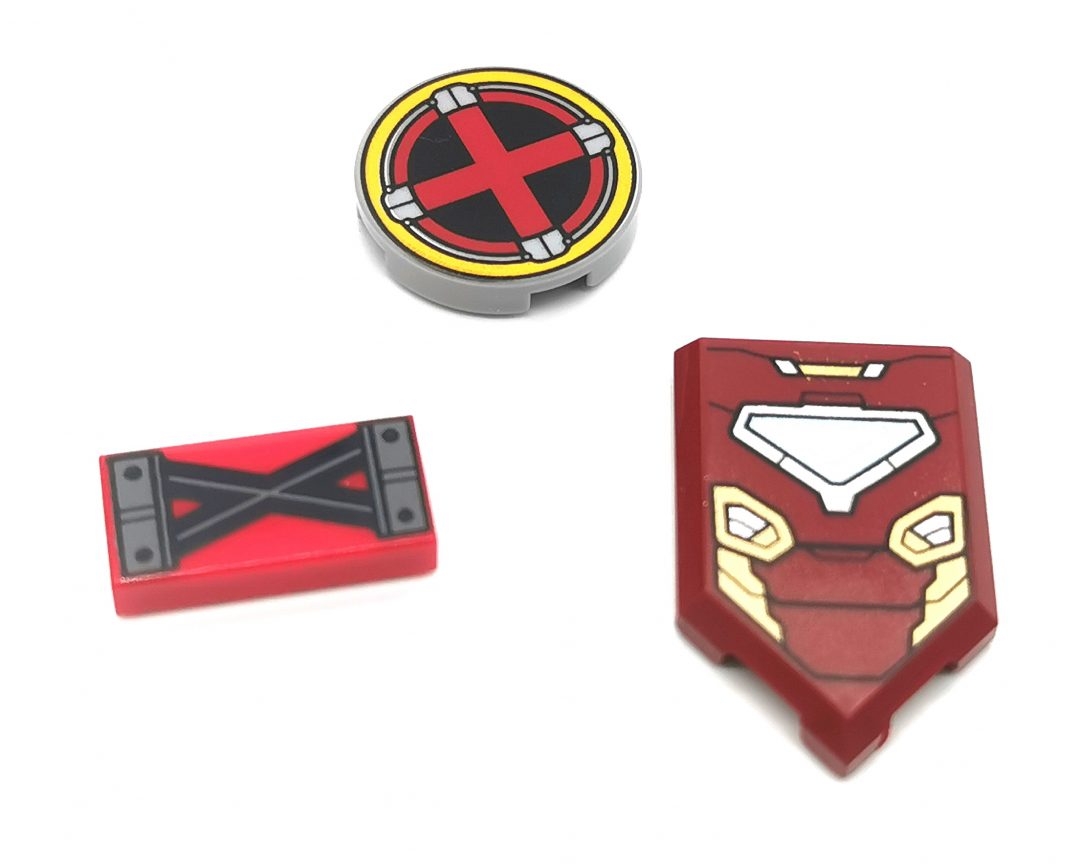 A few parts to note come in the Iron Man set and are the new Opal Blue pieces, the new colour that has a bit of sparkle to it, seen in Disney Frozen, Mini Disney Castle and a handful of other sets.

I really like this new colour and would love to see more done with it, the use of it here is for Iron Man’s arm shield piece and it works extremely well and looks like a futuristic forcefield. 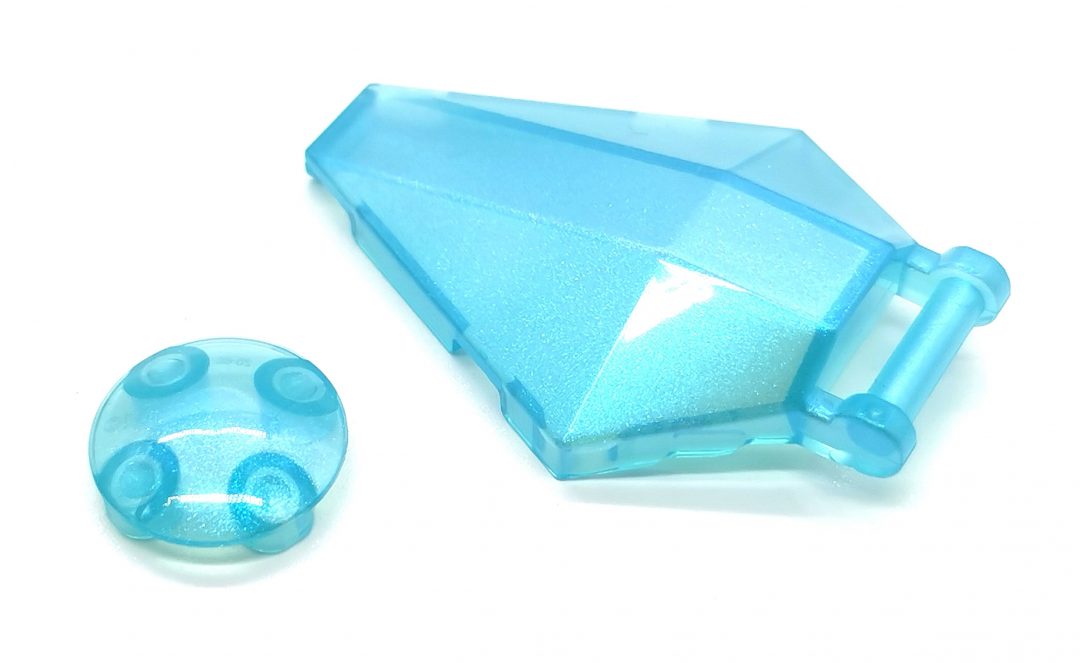 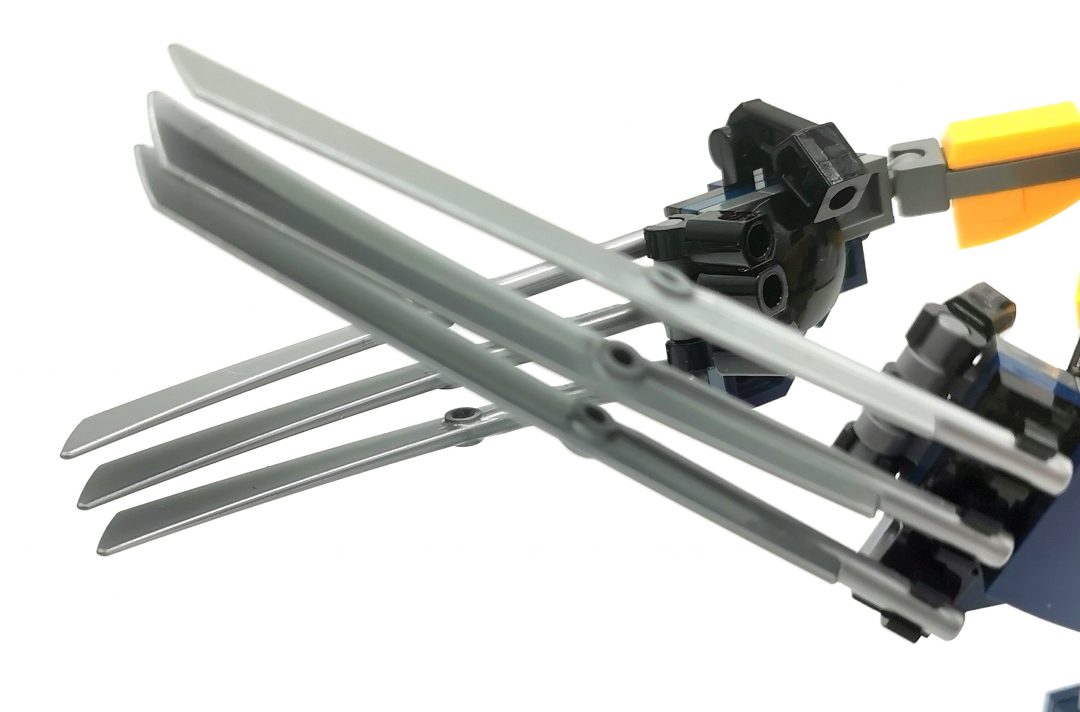 A other part we rarely see outside of the Ninjago theme are the blade elements used for Wolverine’s blades. They’re a tad over kill but they work so well, it almost has a comedic look being so big.

As you can imagine and again if you’ve built at least one of these Mechs before you’ll know the articulation is incredible with every joint having pretty much a full 360° turning circle. There is one difference compared to the previous waves and that’s the groin area where LEGO tried to update the connection design but failed which resulted in these three sets being pulled from their original 1st January 2022 release date. Thankfully they updated it and managed to get them out for 1st April 2022!

The new connection is basically a block of LEGO and limits the maneuverability of of the hips, when I says it limits it I mean there is no movement there at all and you can’t swivel the torso separately from the legs.

Onto the Minifigures now which definitely steal the show!

Starting with the main event, in my opinion anyway, Wolverine! 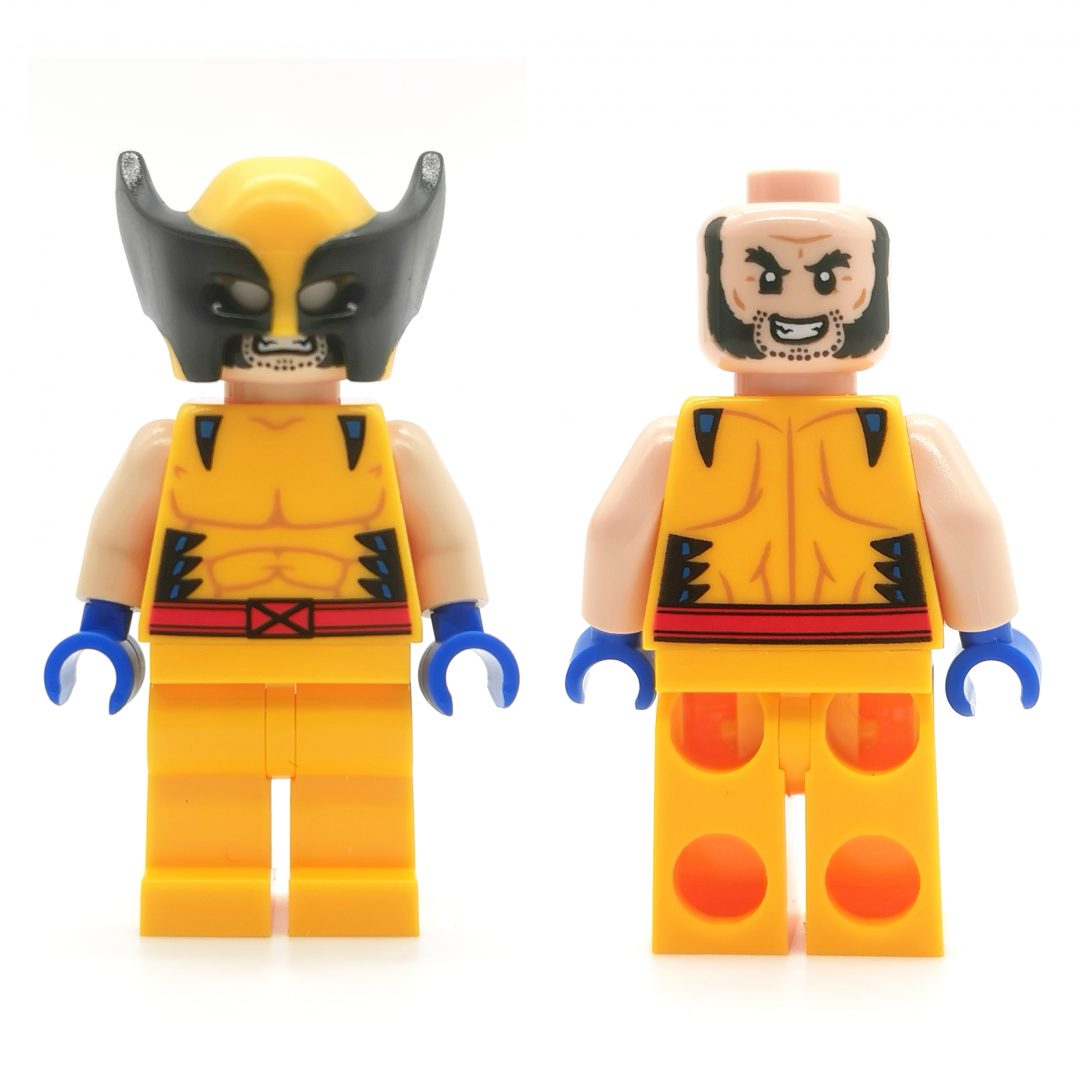 Being a small time LEGO Minifigure collector I knew I had to get this set and add Wolverine to my collection. It’s such a cool and this is my first ever Minifigure based on him.

He sports his classic yellow and black look that he wears in older Marvel Comics, along with the iconic pointy mask. Sadly there isn’t any leg print but I’m actually OK with that as it matches the look of the comics. 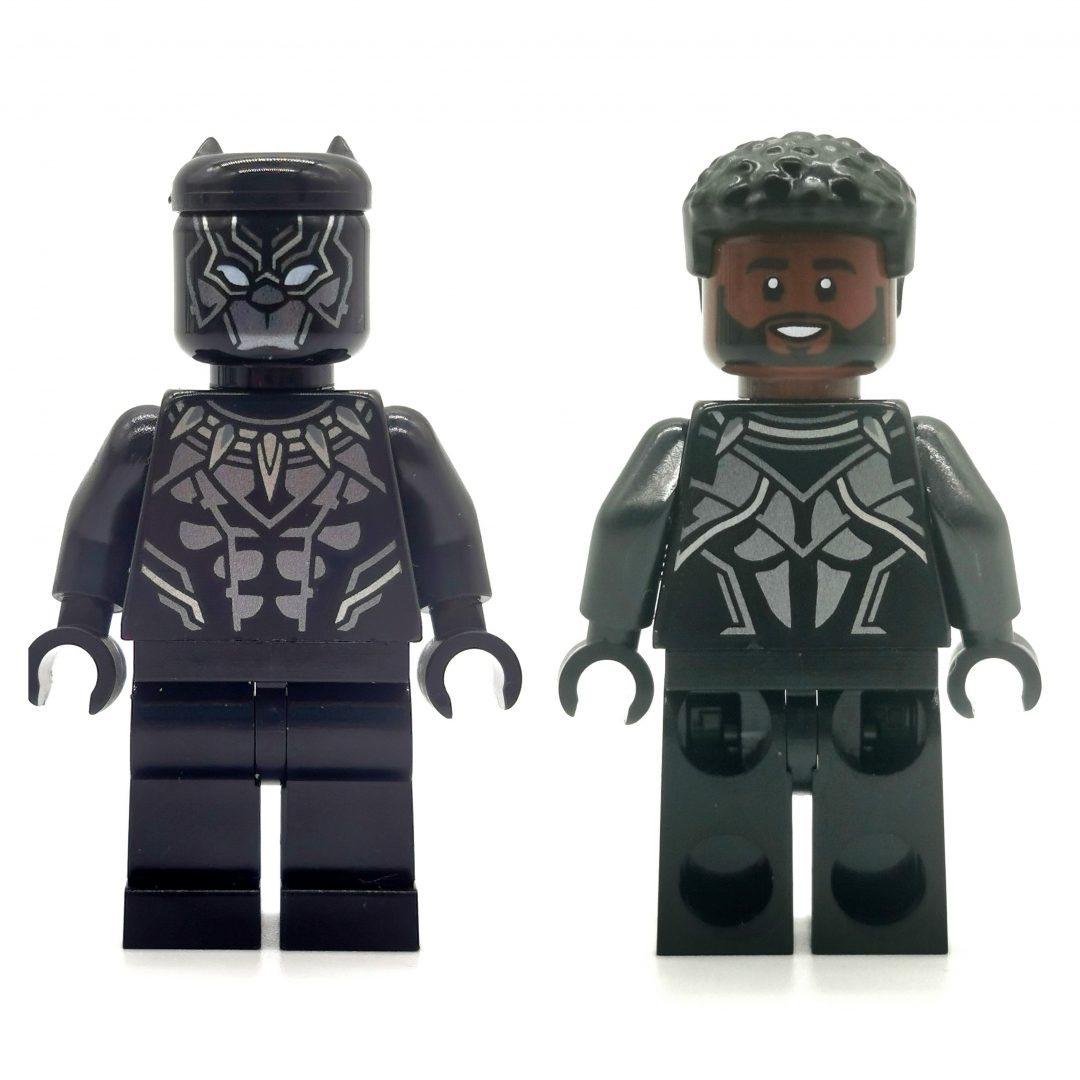 Black Panther is another great Minifigure and a welcomed addition to the ever growing collection.

He has a fabulous torso print that really stands out against the Black of the torso. Again this one doesn’t have any leg printing and I’m quite disappointed about that as his suit is the same all over and would have been amazing to have that in Minifigure form.

He does come with alternative head and hair pieces which is a great move by LEGO and one I’m happy they do. Having the choice to unmask the characters really opens up the imagination and playability of the sets. 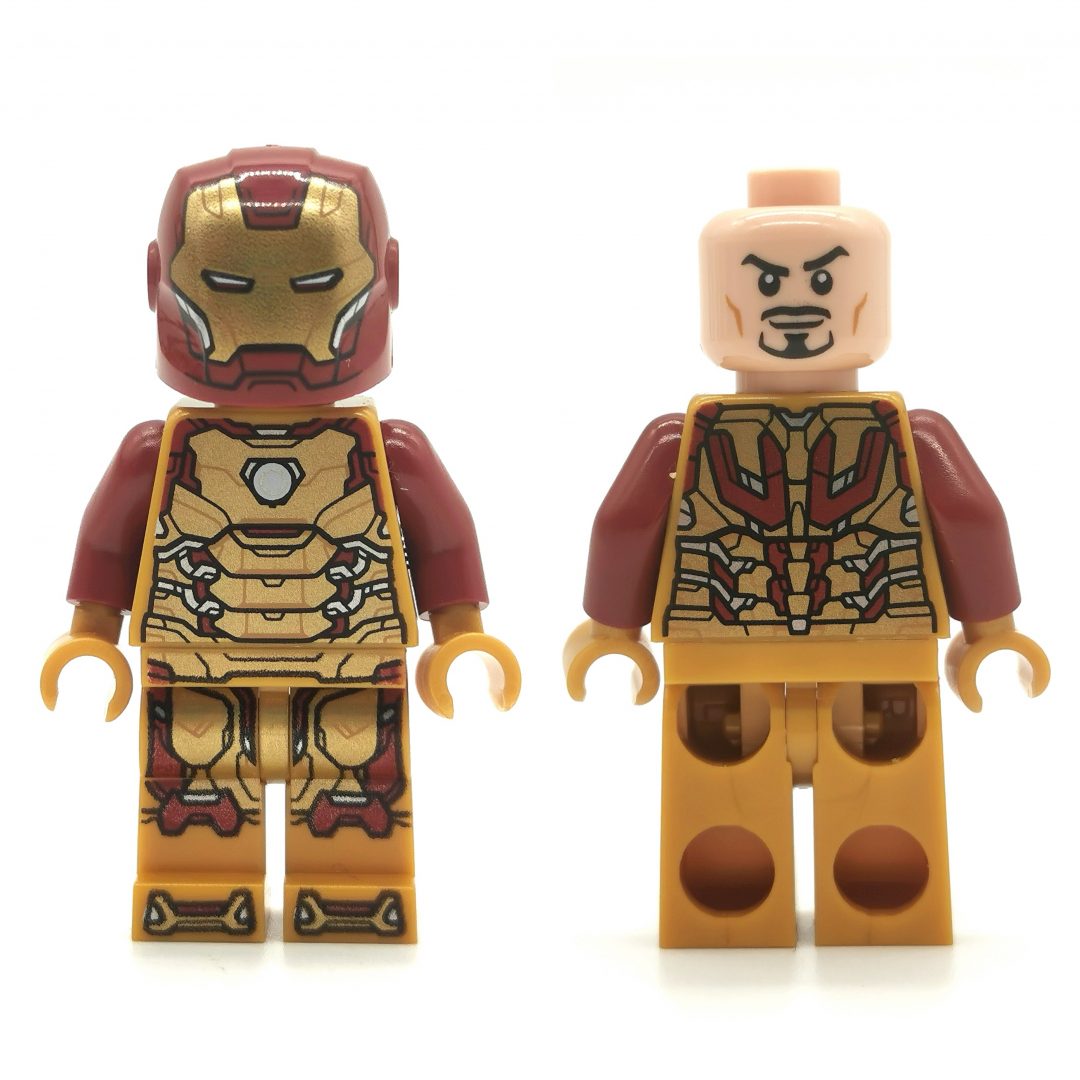 This rendition of Iron Man, Mk, really stands out from the crowd as he has printing on both the torso and legs. It’s so good to see a Minifigure done right and it’s somewhat rare to get one all suited up like this in a such a small set.

The one thing that let’s it down is the newer style of helmet, the fully moulded version looks good but doesn’t have a patch on the older flip-up one!

He has the standard Tony Stark head that comes with his HUD and a plain face for when his mask is up, although no additional hair piece ws included.

Each Mech is built in a similar fashion which really helps younger fans get into a rhythm when building multiple. The playability is beyond fun and really gets the imagination flowing, the scenarios you can create and recreate from the comics and movies are endless, thanks to the amazing articulation.

The Minifigures are where it’s at for older fans though and rightly so as the Wolverine Minifigure is quite sought-after with his last outing in 2012!

Design and printing on each one is too notch and will make any fan happy. They match their onscreen and comic book counterparts well.

We highly recommend these sets to all ages of fan and are perfect for gifts.

Thank you for reading this review, we hope you enjoyed it. We really appreciate your time. 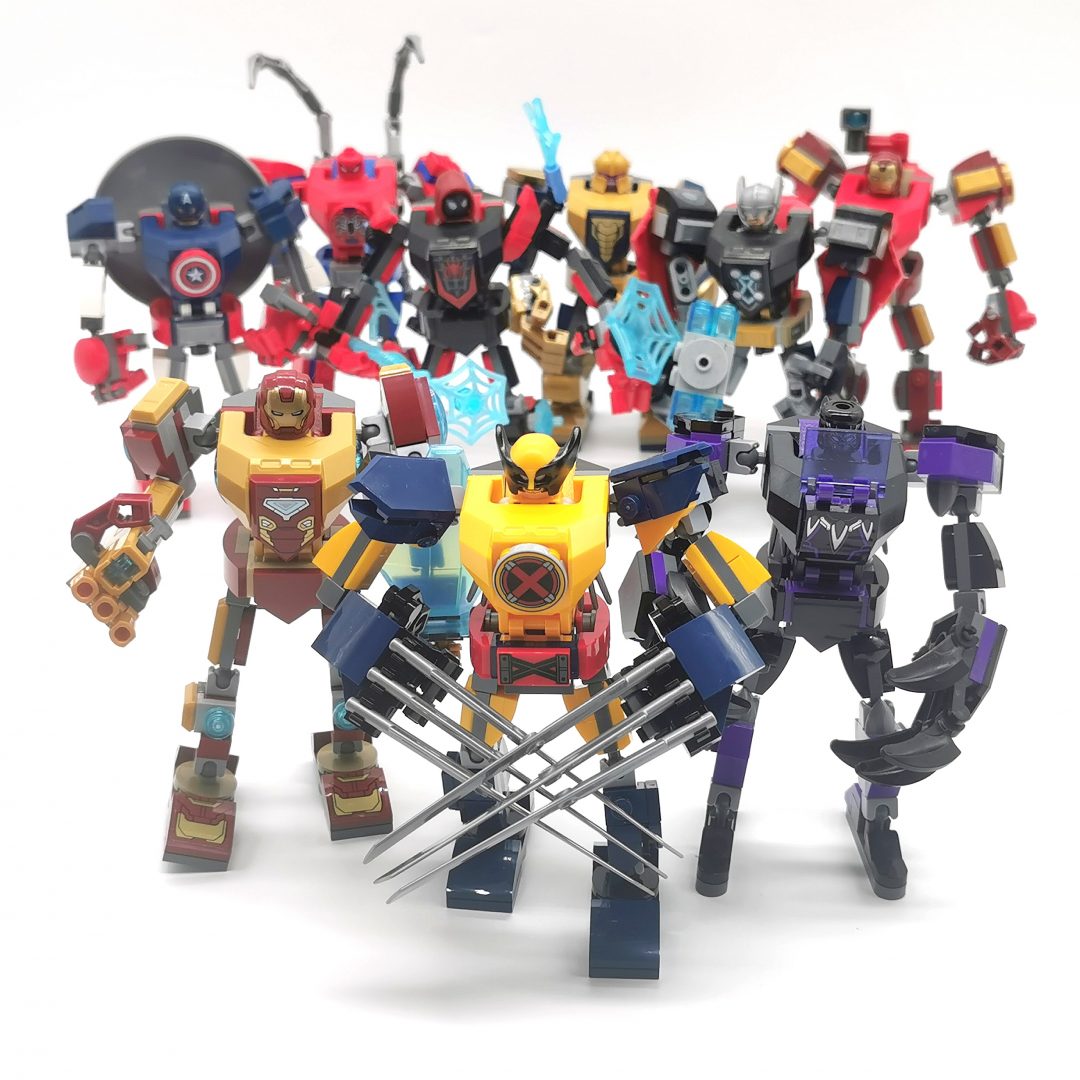 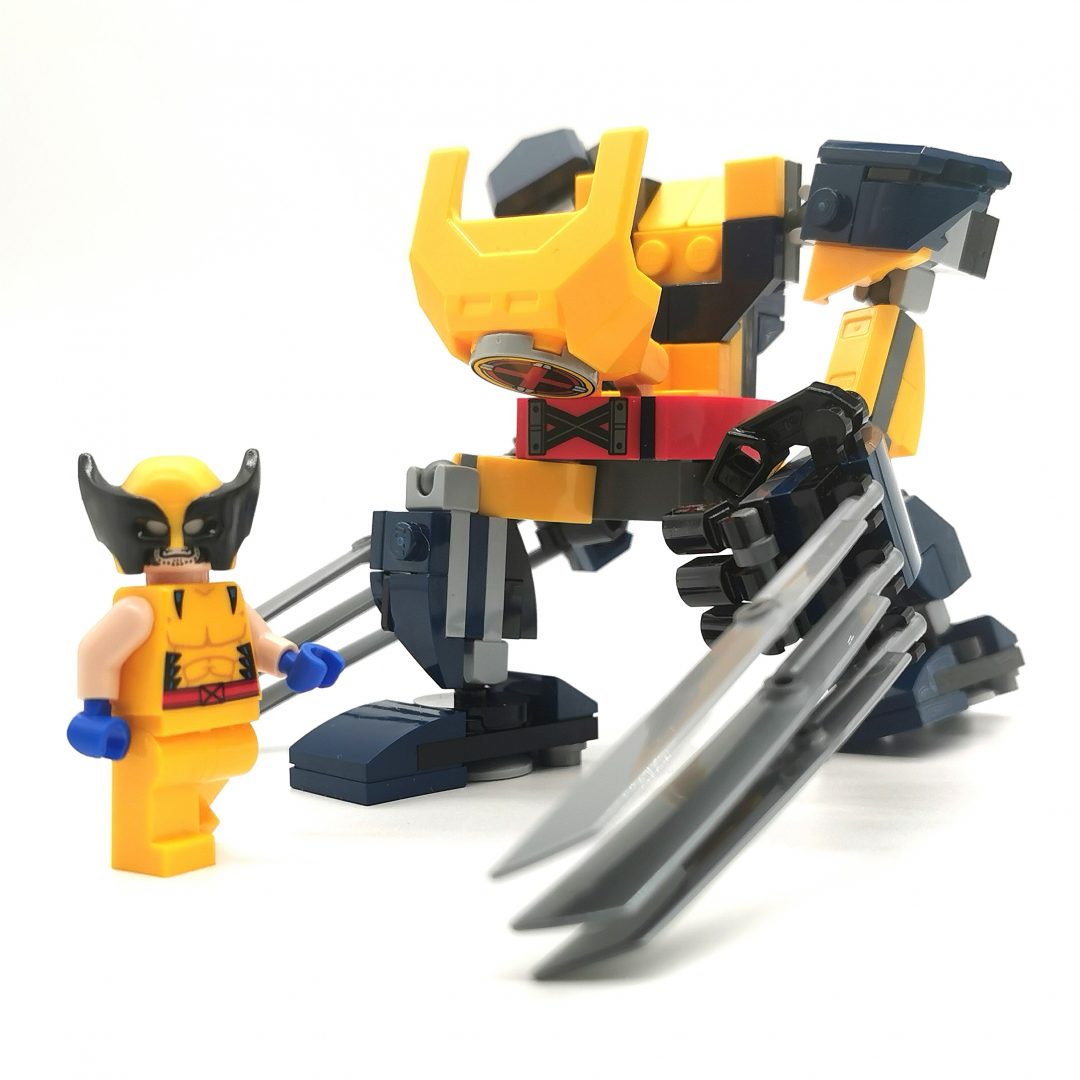 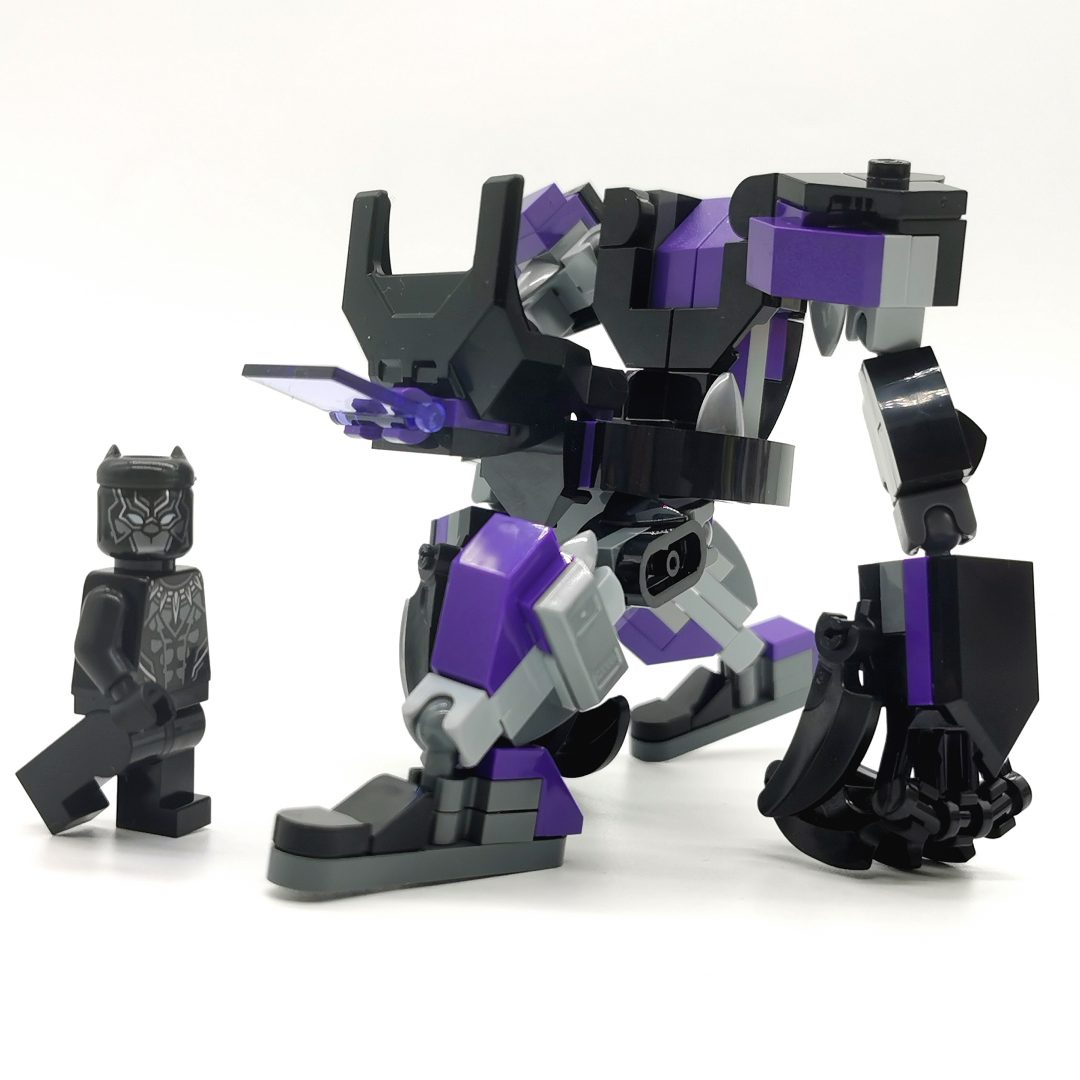 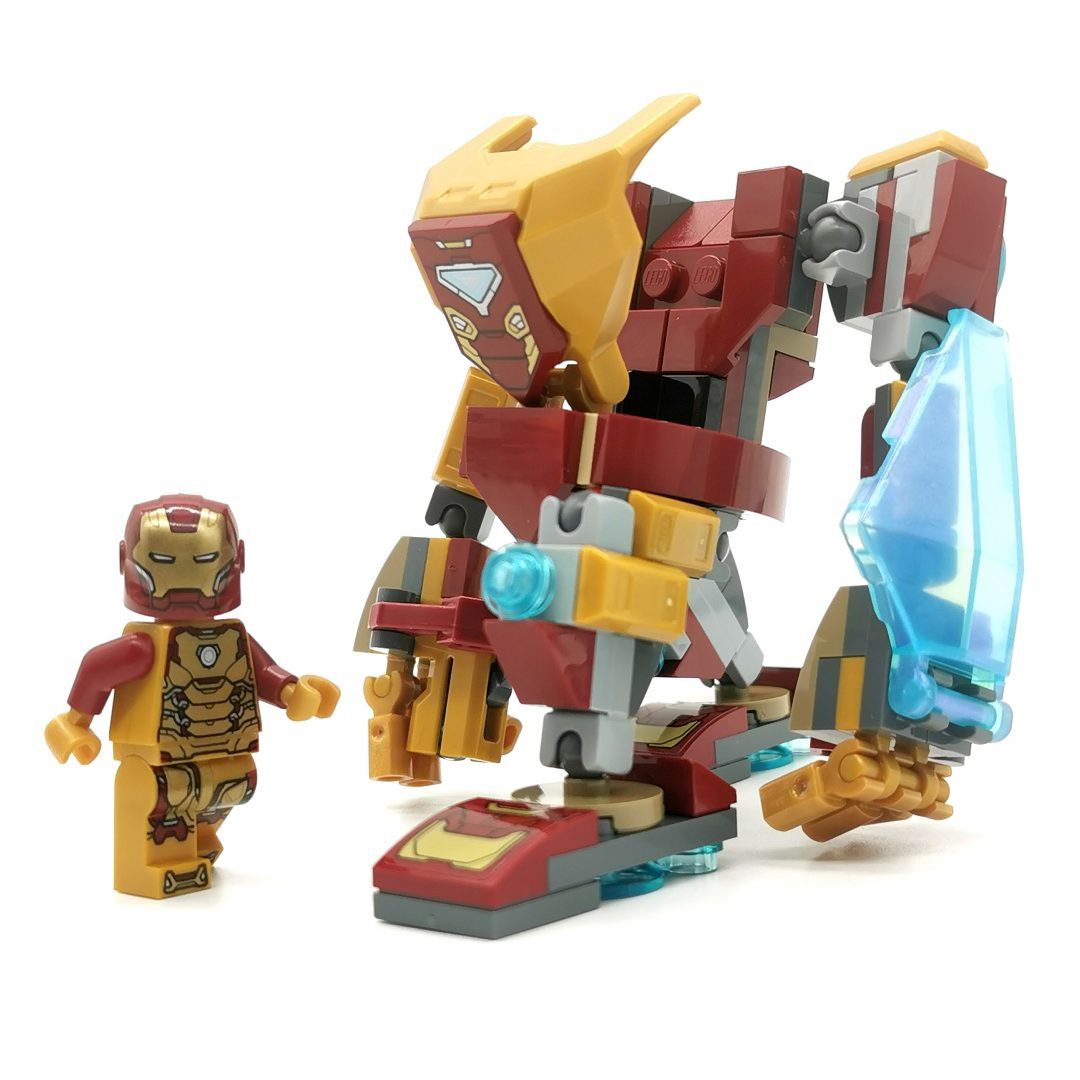 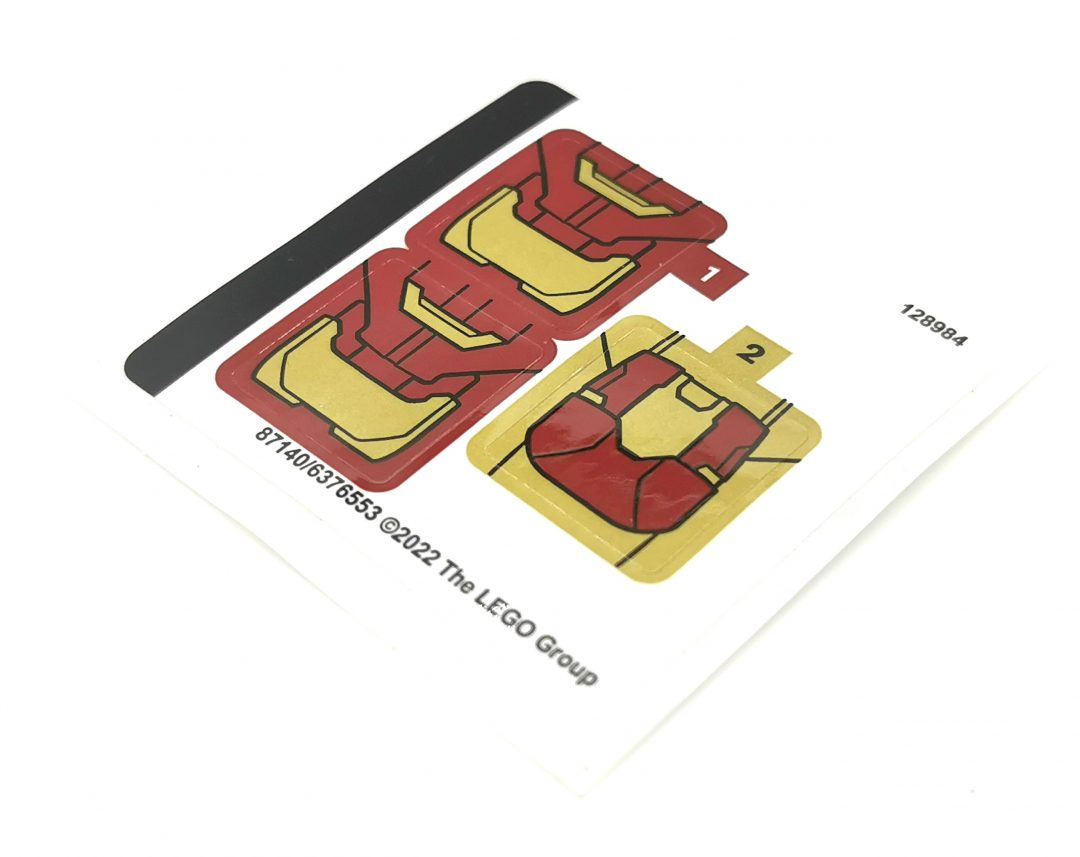 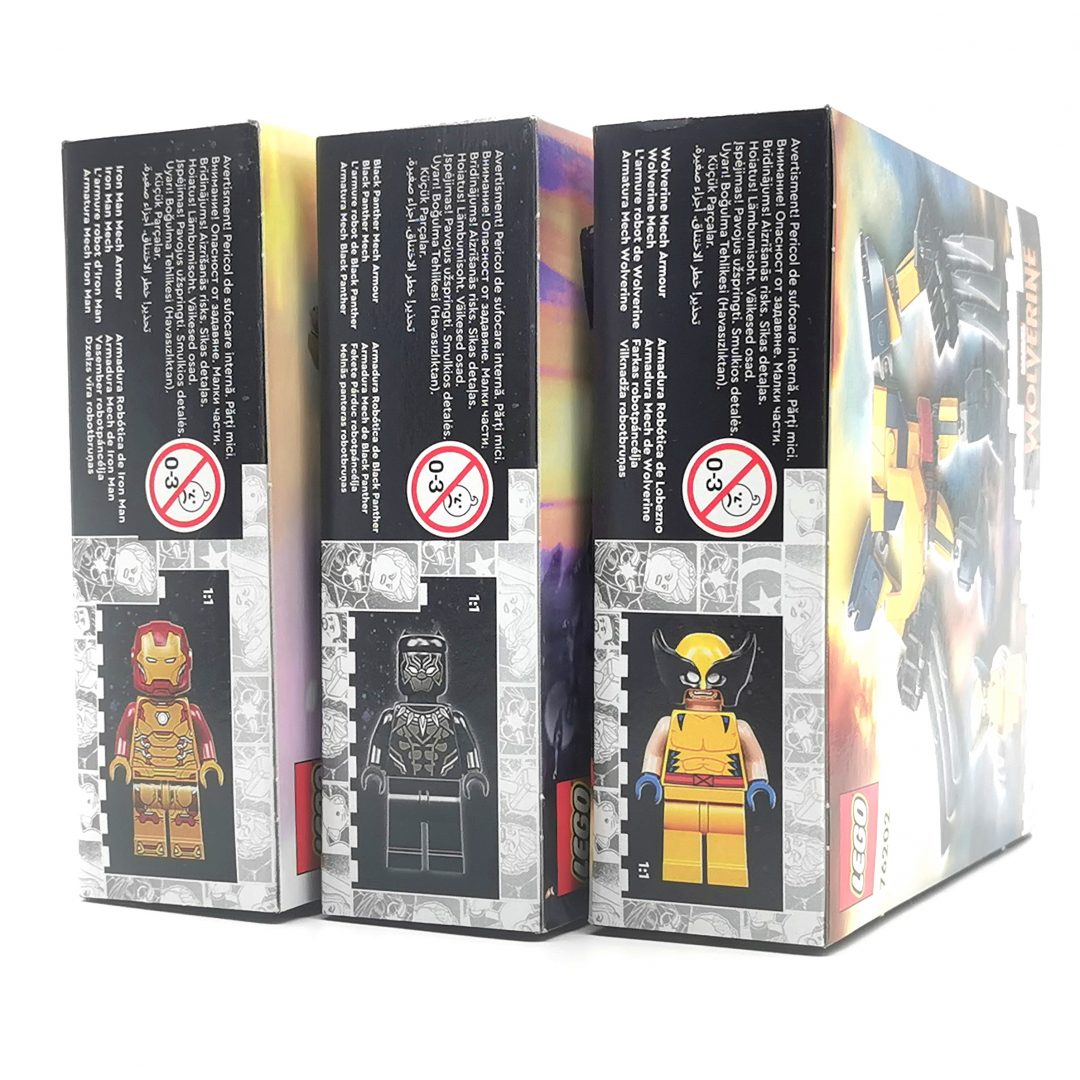 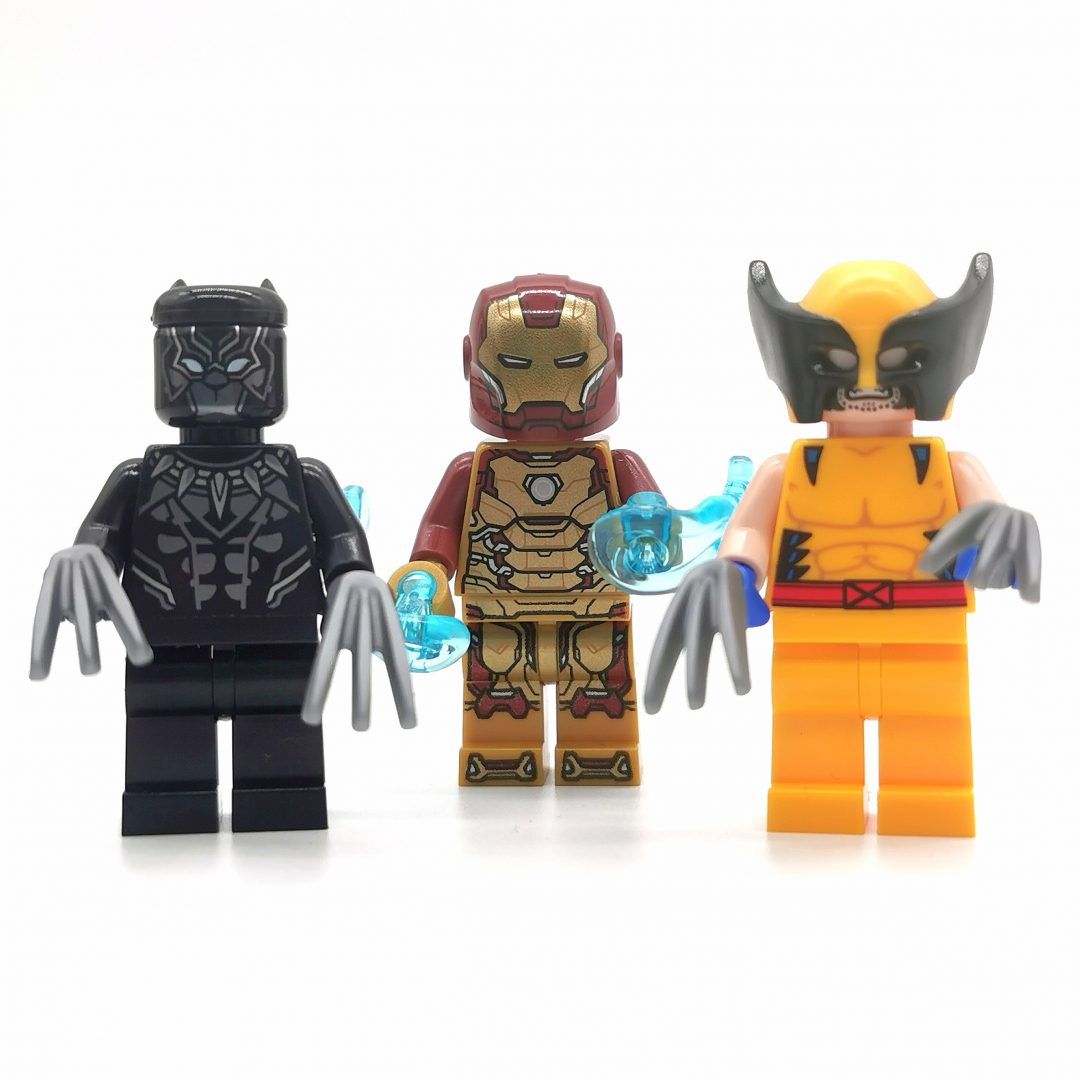 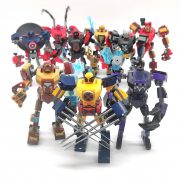 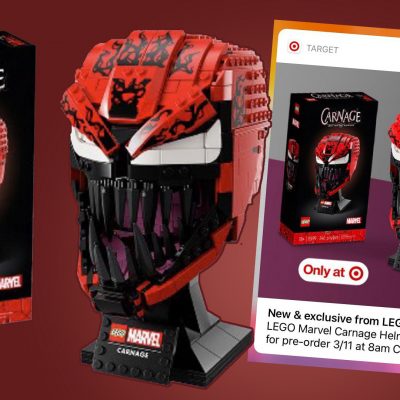 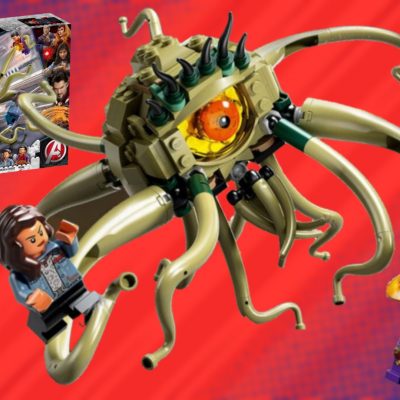