LEGO City sets are usually my failsafe, if there’s a shortage of other sets that I want to pickup, Marvel, Star Wars, etc, then I can always rely on a City set to get me through. The last month or so has been tough, some see it as a relief, that not many sets were released in July, which is a blessing in disguise as August will deal massive damage to our bank accounts.

So whilst perusing Amazon for a deal or two I came across the relatively new LEGO City Farm sets and added the smallest, entry level, set there was – LEGO City Chicken Henhouse (60344)!

This little set packs in a lot of cool stuff for the £8.99 price tag, including a couple of Chickens, a ATV with ‘turning action‘, a Coop, and the new Farm-style Minifigure. Continue reading for a more in depth look at the set. 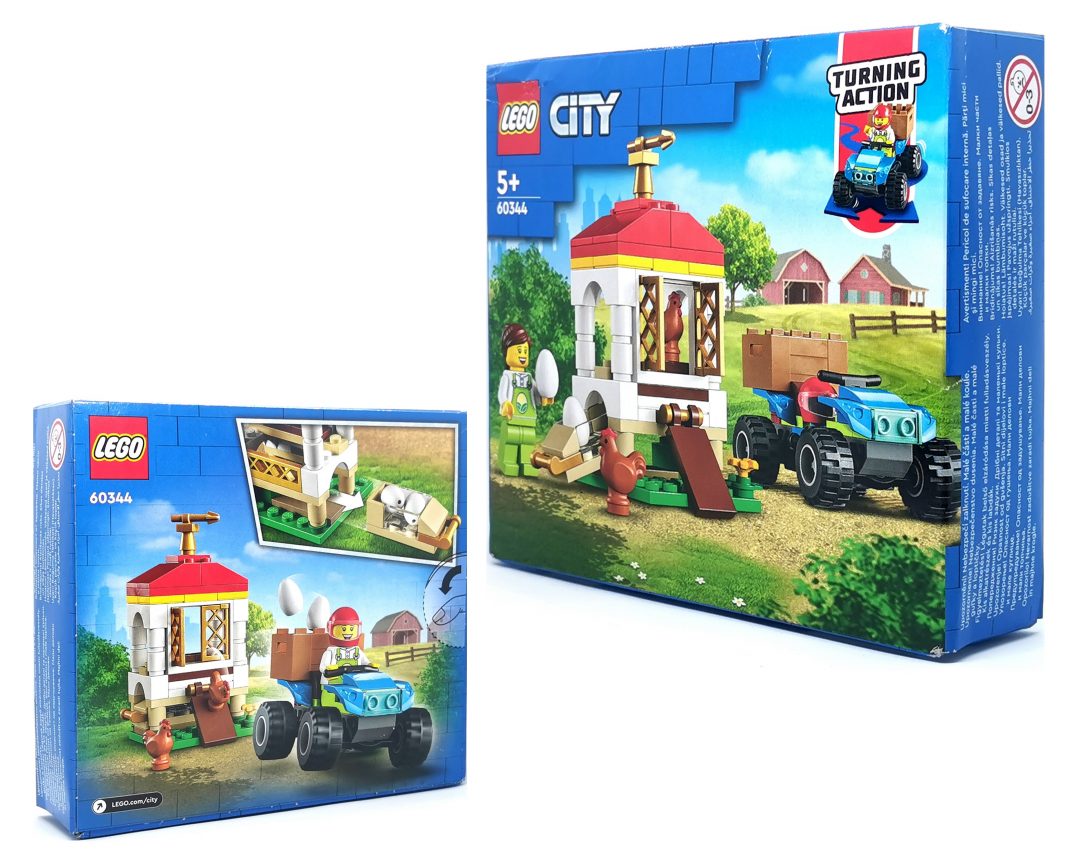 The LEGO City boxes have always been bright and feature packed, this is to attract the younger fans to them whilst in-store, but I must say they do look great. On the front we see the full build and Minifigure against the backdrop of a fully fledged Farm. I like it when they use this type of semi-realistic background.

Flip the box around and you’re presented with a couple of the play features, a removable egg tray, Coop with opening doors, and the ATV which comes complete with LEGO‘s new ‘turning action‘ mechanic.

The instruction manual is done in the new ‘no frills‘ style with the set as the main and only feature on the cover. As I’ve said in previous reviews, I don’t mind these new manuals at all and actually rather like their ‘plain-ness‘. 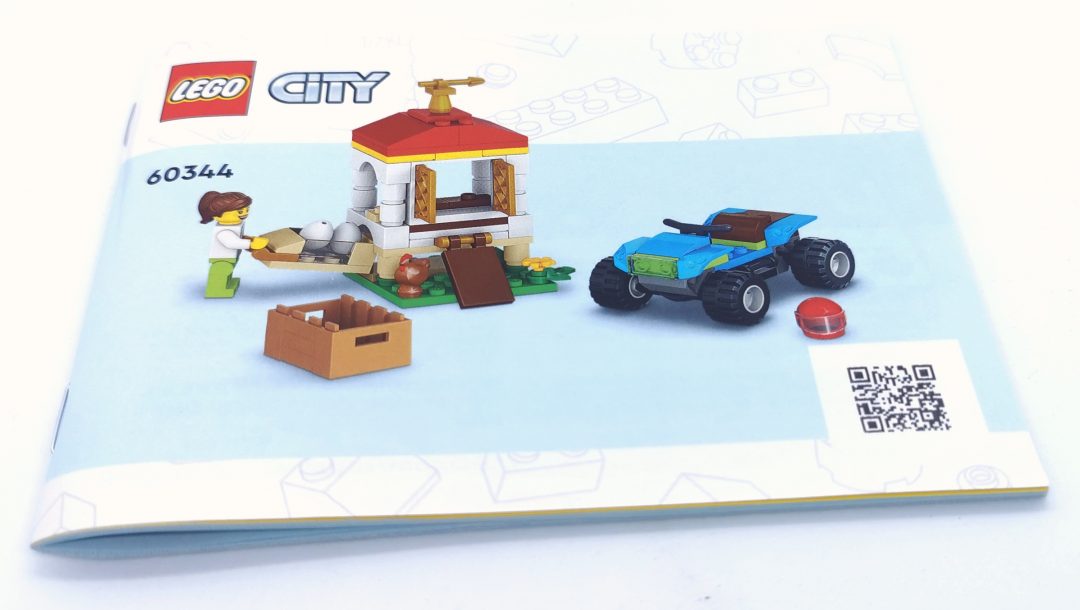 As you can imagine there aren’t many bags in this set, certainly no numbered bags. For the size the part count of 101 pieces isn’t too bad and according to BrickSet the part to price ratio is 8.9p (9.9c).

Full of colourful parts, a couple of animal figures, eggs, and a gold arrow/dart piece the set boosts a good variety of bits & bobs, if you’re into MOCs (my own creations) then it maybe worth picking up as it is. 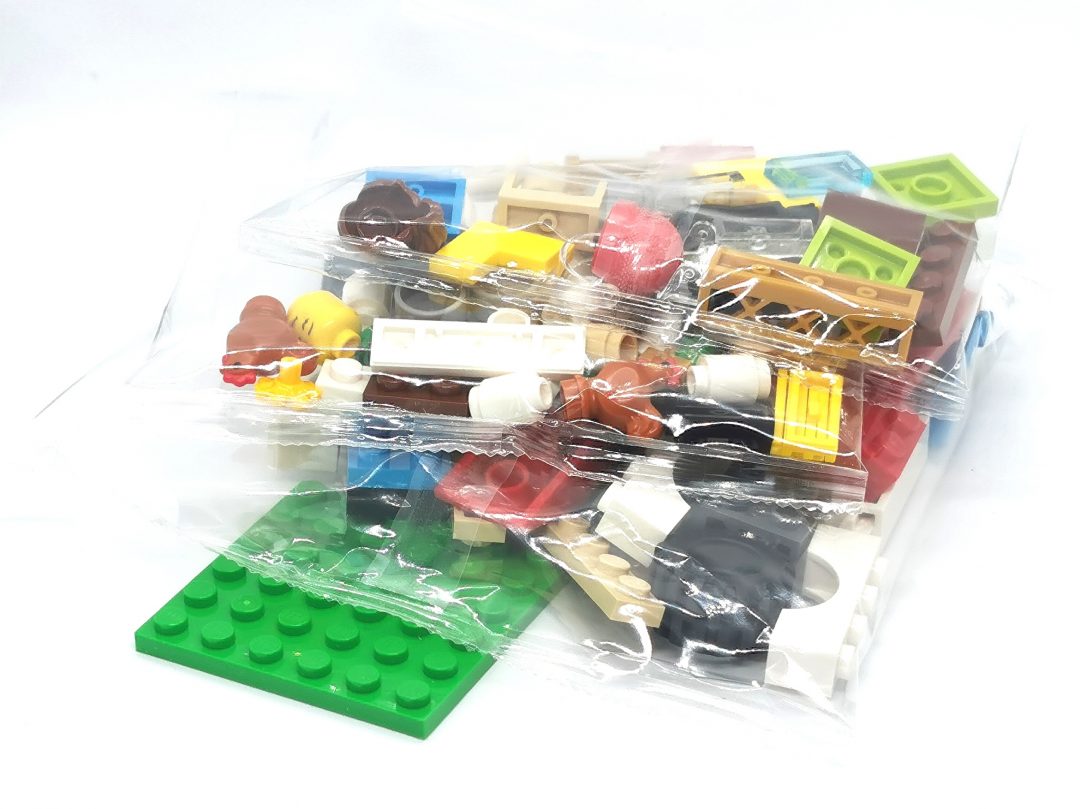 The whole set took about five minutes to complete, that includes the time to grab the box, open it and spill the contents out onto the table. I did have a little helper whilst building, my 6 year old Son, who throughly enjoyed piecing it together and playing with the Chickens and the ATV.

Popping together the ATV was slightly different than most as the new ‘turning action’ axels are relatively new. Simply clip in place, add the wheels and the body and the ATV is complete, I must say as LEGO ATVs go it’s quite refreshing to have something different and that can actually turn. It acts in the same way as a Skateboard, the steering kicks in when you lean the device to the side in which you want to steer, it does work w 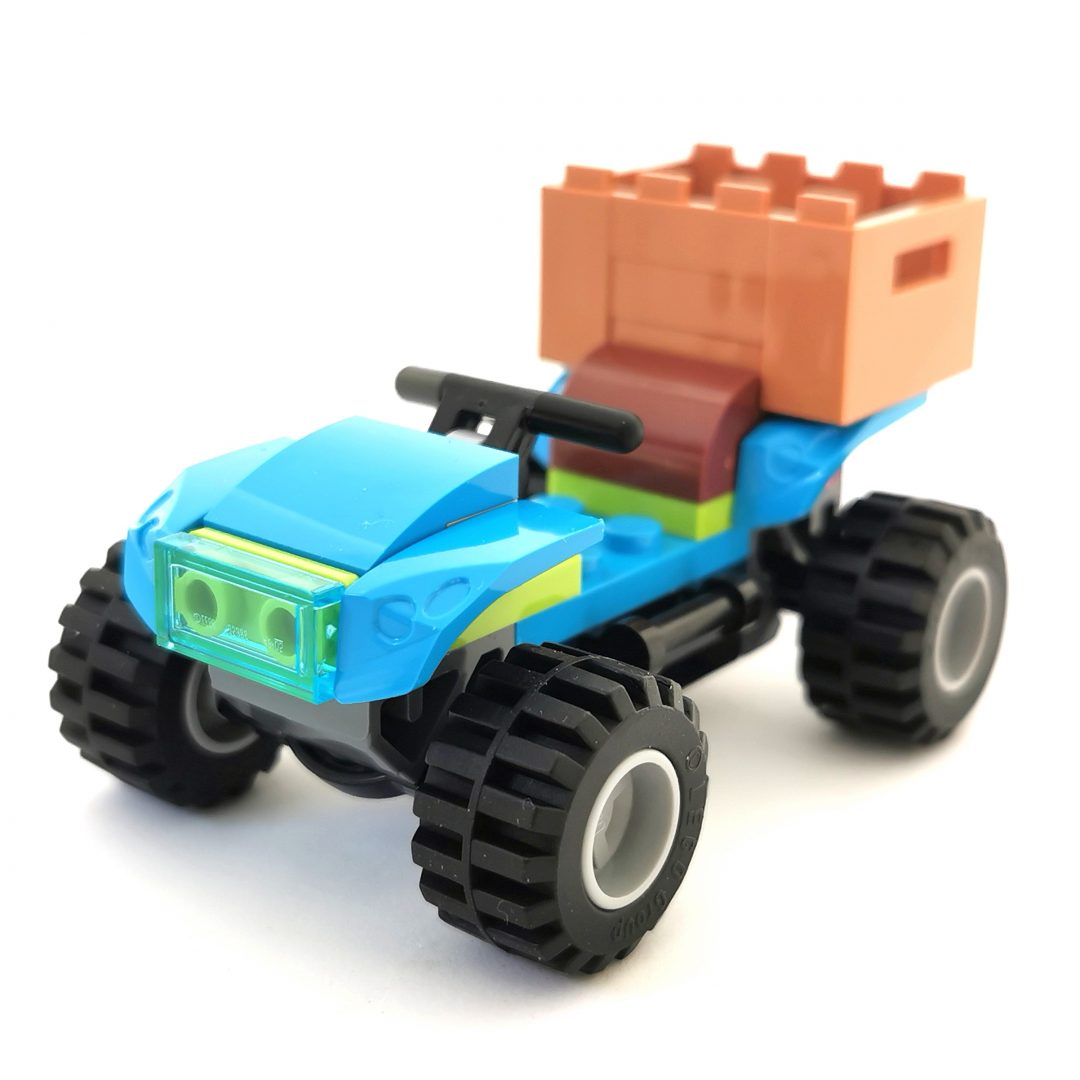 The Chicken Coop is the main build and looks the part being made up of only a handful of pieces. There is plenty of detail in the structure itself with the use of the 1×1 tube bricks, archways, and the gold lattice window/door.

There is a short brown ramp leading up to the door and easy access at the back to attend to the Chickens. Underneath all that there is a play feature in the form of a removable tray that has two eggs waiting for you.

I really like the colour scheme and the in particular the small weather vain say on top of the roof. The roof also lifts off easily as it’s held on by just two studs. 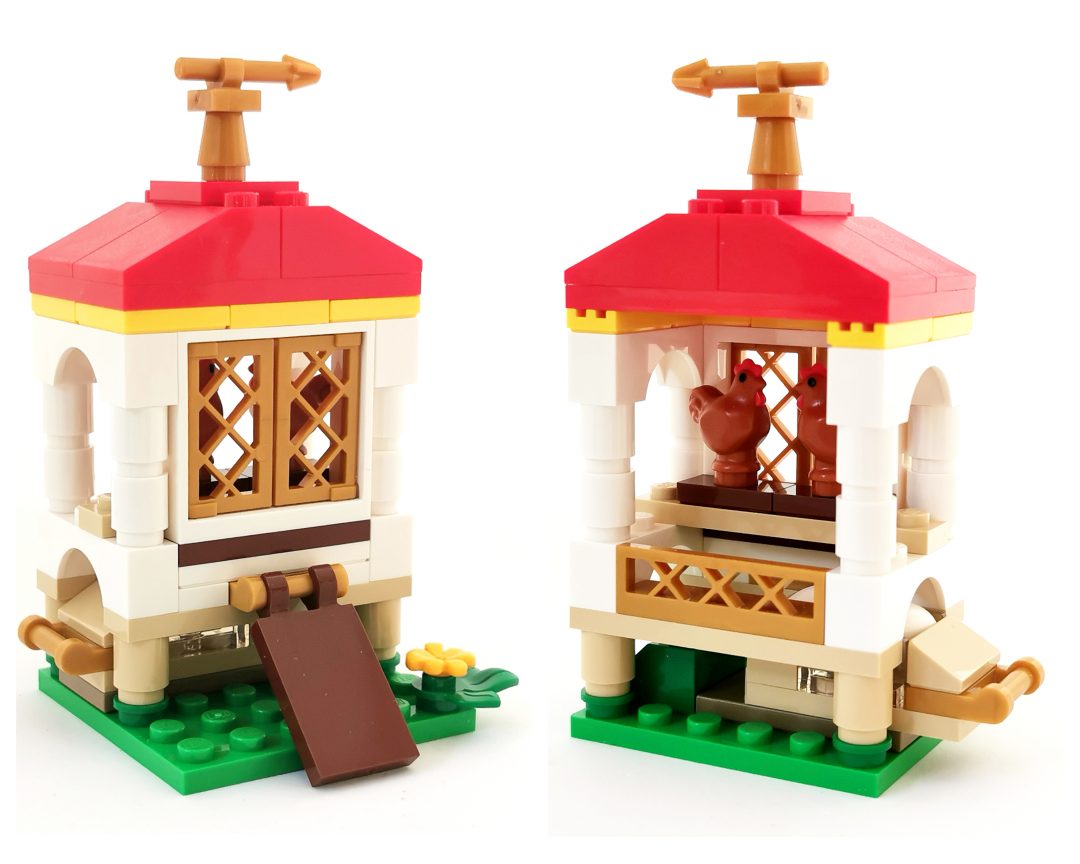 A nice addition to the set are the Chicken figures, this time they come in the colour Brown. For a Farm set it’s a no brainer to include some sort of animal.

Being an entry level set there is only one Minifigure included, which I’m absolutely fine with. The Female Farmer sports the new LEGO City Farm style logo and it looks great!

The torso is the only part of the body that has printing on it, but it is front and back so that makes up for the legs and arms being plain. That being said there isn’t really a need for the arms or legs to have print on them, it’s just always nice to go that little extra.

The design on the torso is very sharp and the colours used pop and look the part. I like the green overalls and the white shirt combo. 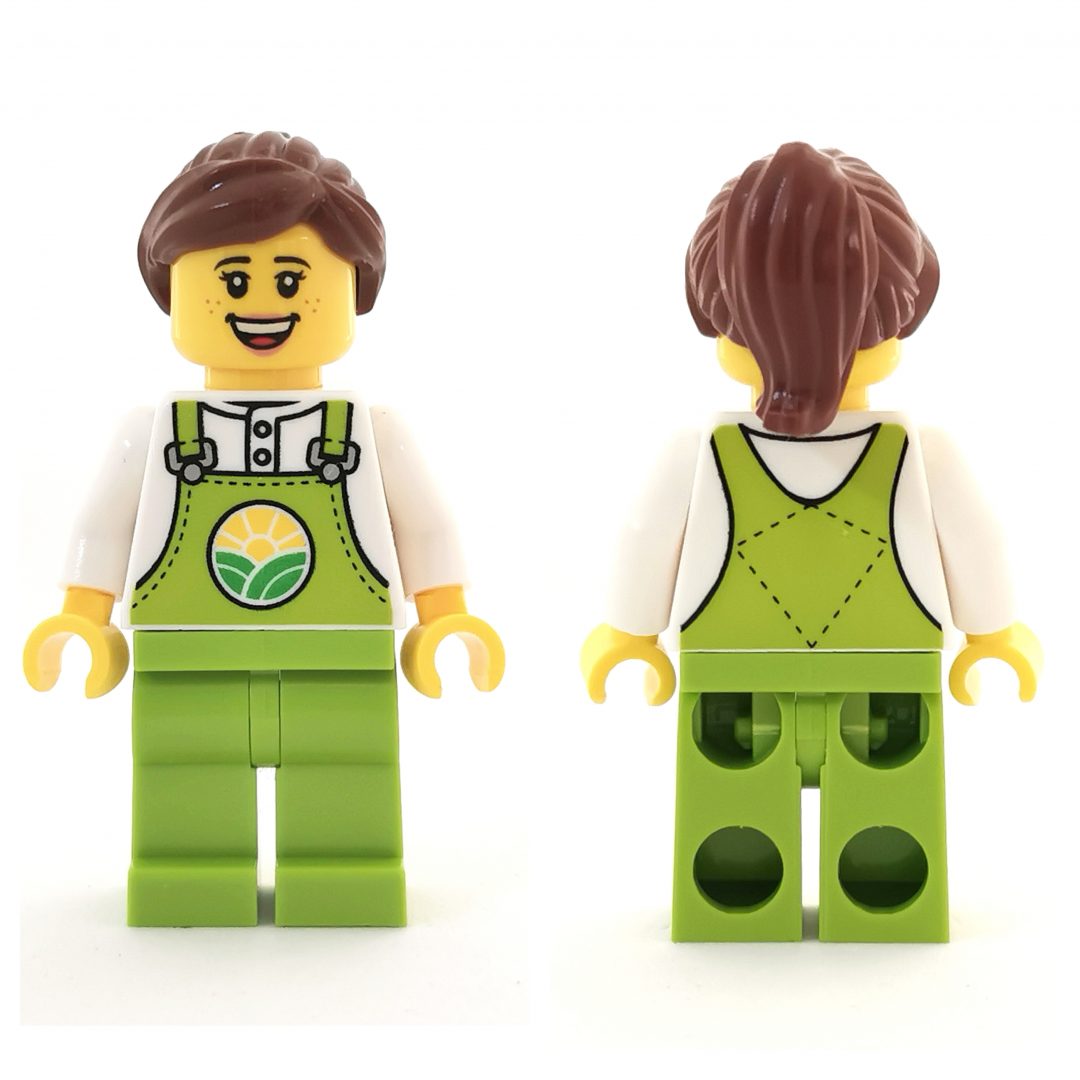 Her happy expression also works for this type of Minifigure as she must really enjoy her job. Again the design is crisp and the printing has been done exceptionally well, all to LEGO’s high standards.

Overall this small but affor9set is great for the price and well worth picking up, especially if you want to dip your toes onto the new World of LEGO City Farm.

This 101 piece set does pack a lot in and there are a good variety of bricks & pieces, animal figures, a vehicle, and of course a Minifigure.

The other sets in the series obviously pack in a lot more but as an entry level set you really can’t go wrong!

Thank you for reading this review, we really appreciate your time and support. Please feel free to bookmark us and pop back for your regular LEGO news announcements and LEGO reviews. 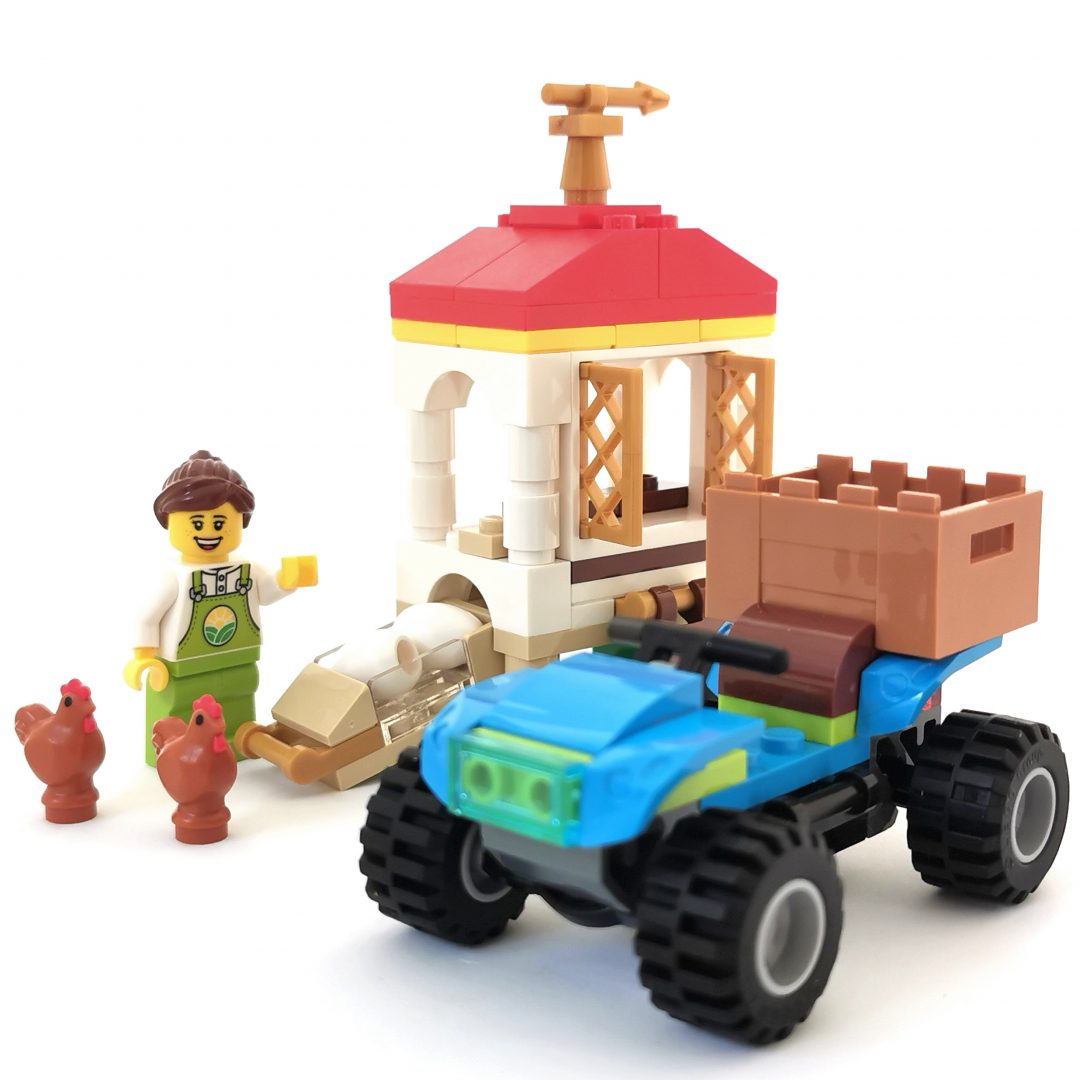 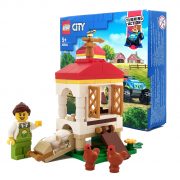