With all the recent LEGO Marvel set reveals it feels right to review the latest issue (6) of the LEGO Avengers Superhero Legends magazine. It comes complete with a Captain America Minifigure! 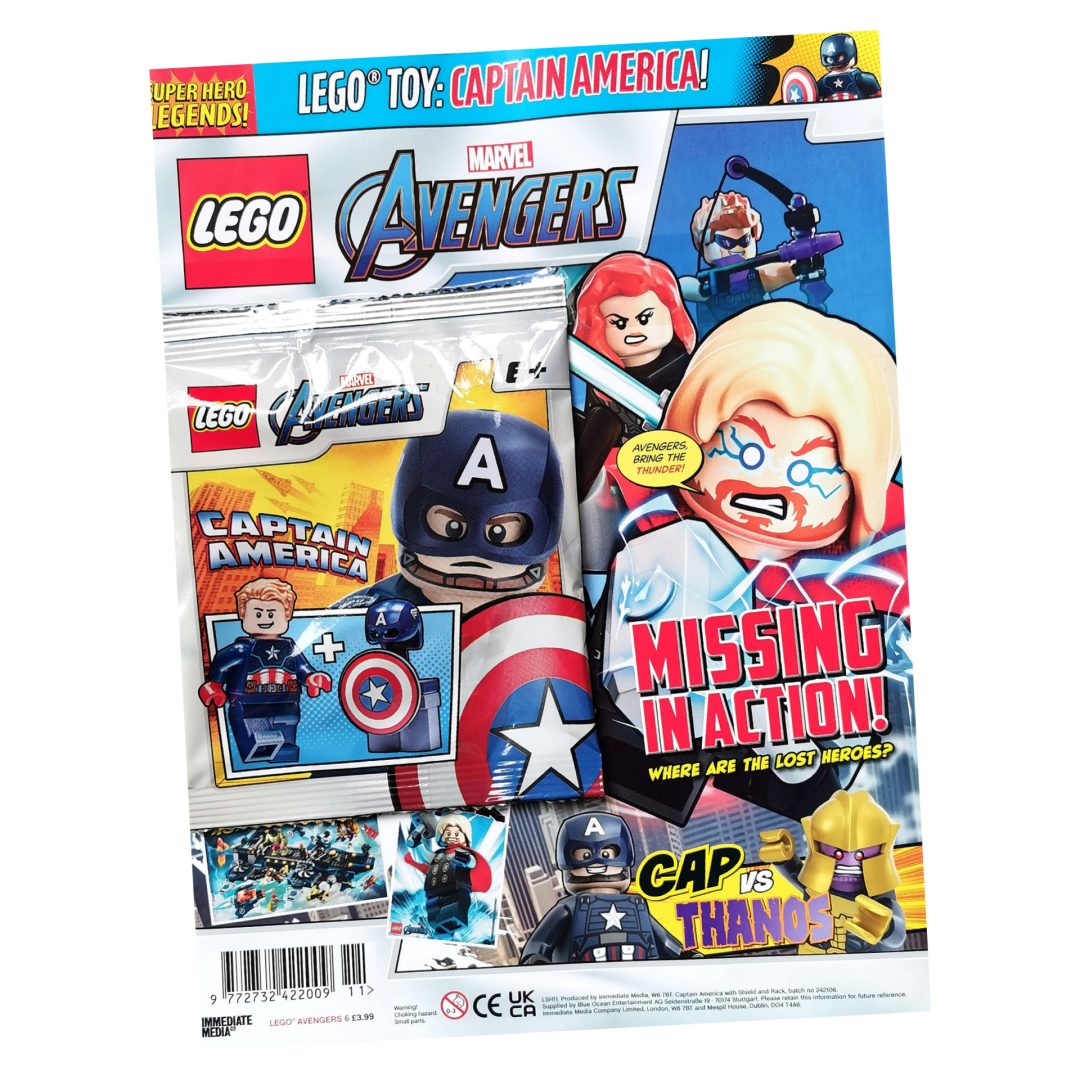 We’ll dive straight in with what’s inside the magazine first, which usually consists of a comic strip or two, a handful of activities, and a sneaky peek at what awesome Minifigure is on offer next time.

Open the magazine and on pages 4 & 5 you’ll find the first set of puzzles. Captain America has lost his Helmet and Shield and it’s up to you to find them, spanning the two pages. Look closely as they’re quite small! 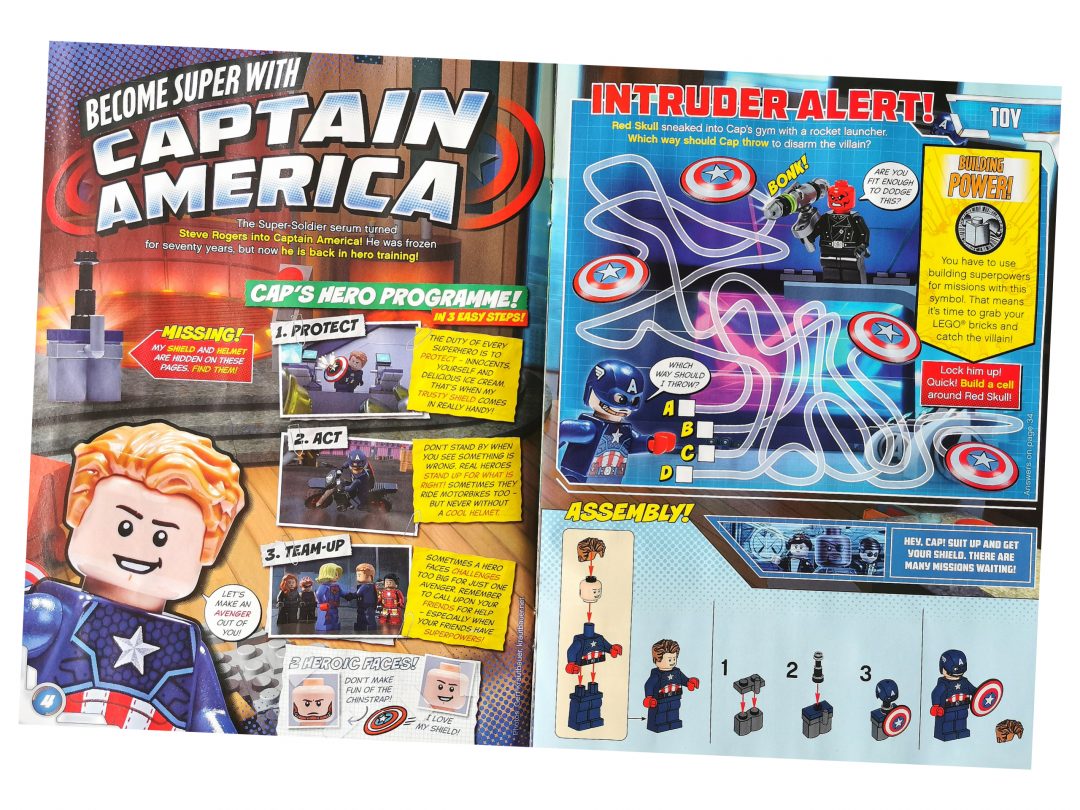 Also on page 5 there is a puzzle and a set of instructions on how to build the included Minifigure. The puzzle requires you to figure out which Shield path would result in Red Skull getting a ‘bonk’ on the head.

The instructions are very straightforward as the majority of parts make up the Captain America Minifigure itself. There is a small side build included but more on those two later in the review. 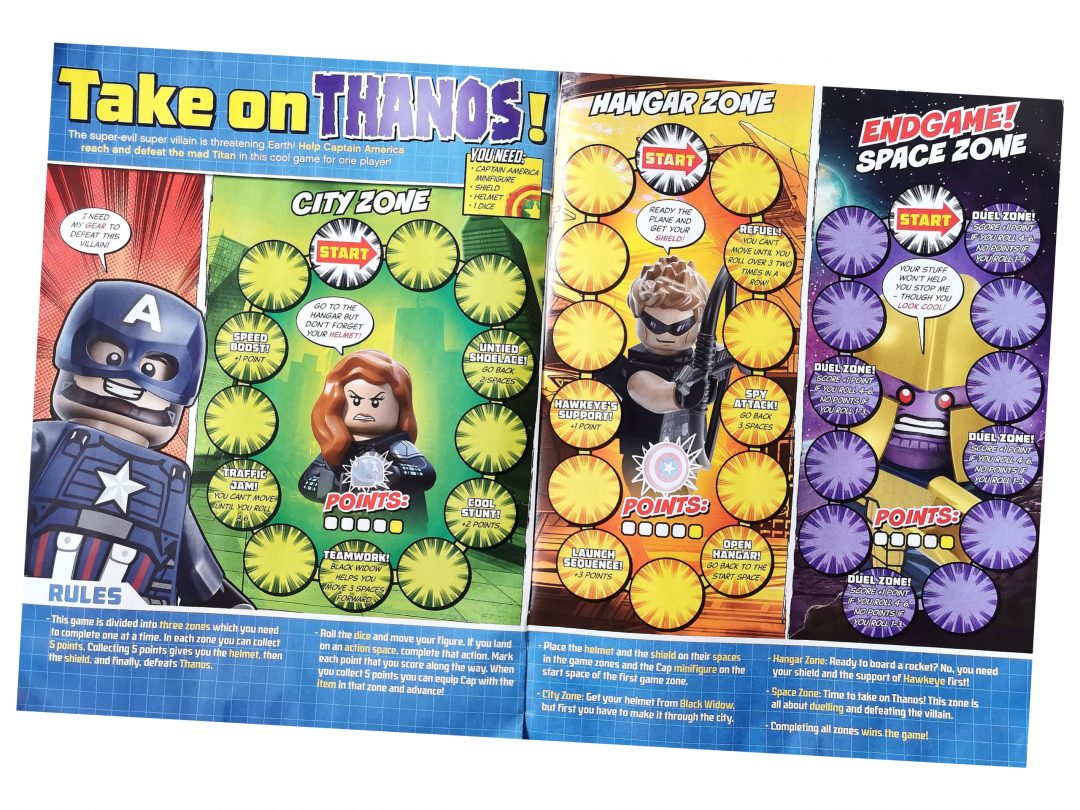 Flicking through this issue there are a lot of puzzles, games, and activities, there’s one that puts the included Minifigure to use!

The great thing about this game is you can play it solo, it only requires one player. You need the Captain America Minifigure, his helmet & shield, and a dice.

You’re confined to each zone until you gather the required points to leave it, jumping into the next one. The goal is to find his helmet in zone one, shield in zone, and then battle Thanos in zone three. 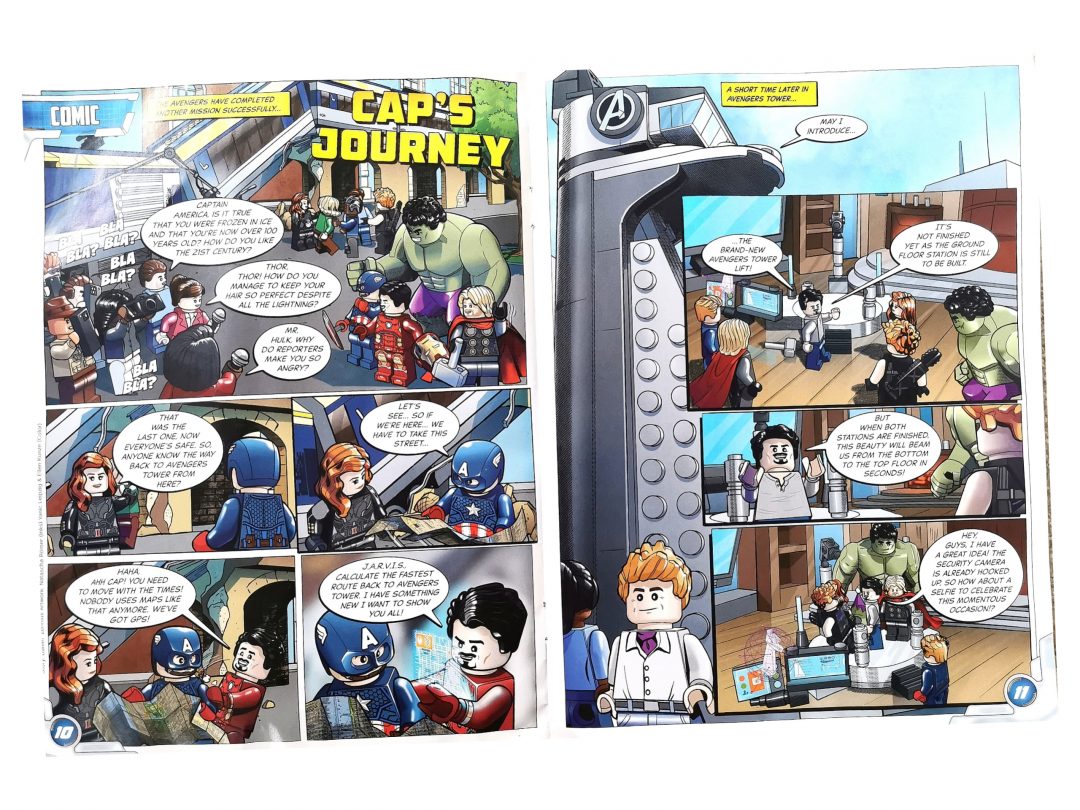 The comic story also focuses on Captain America and he finds himself on a strange journey, I won’t say to much about the story as it’s quite a decent one.

The artwork has always been top notch and as you can see below the group shot is incredible! 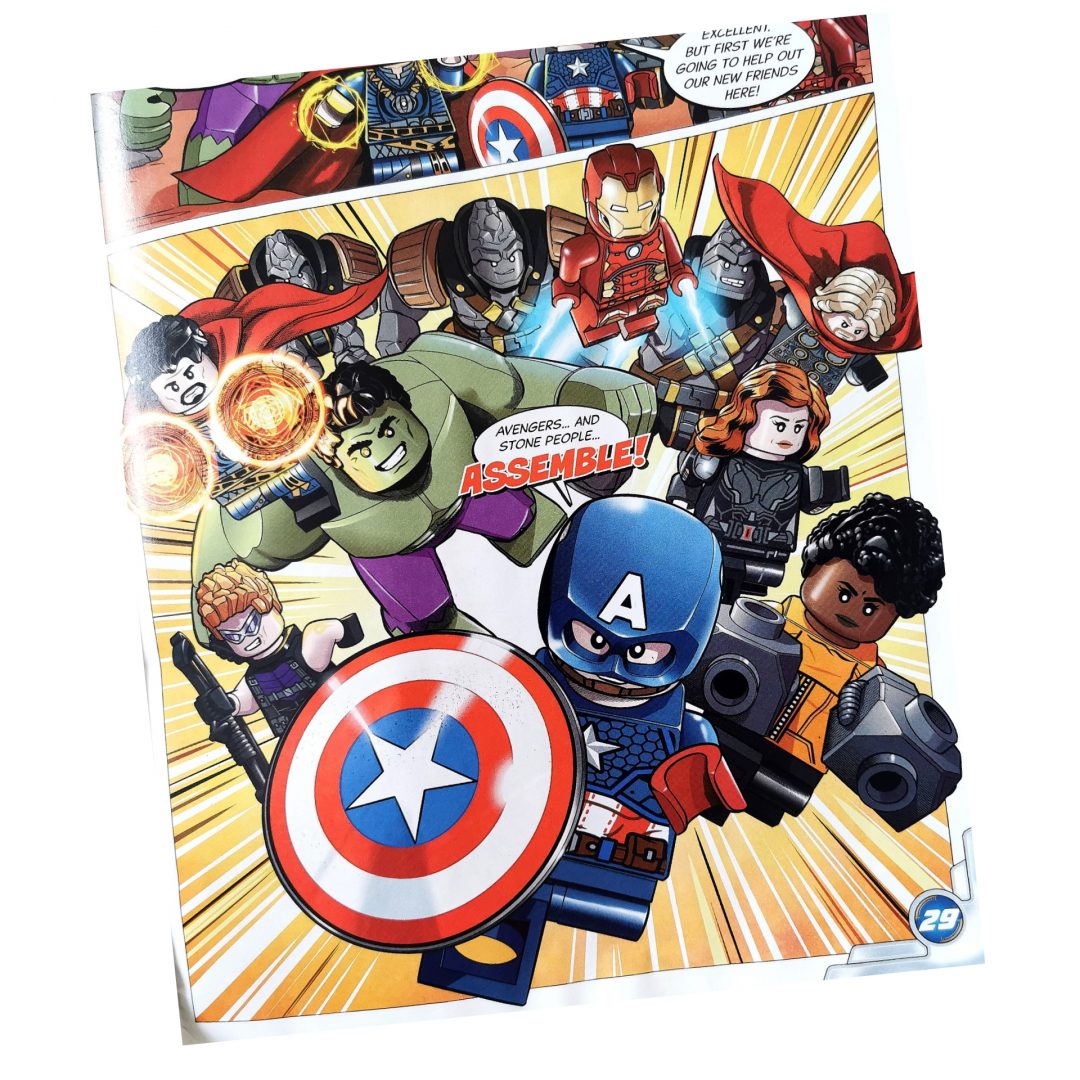 With every magazine I buy the double-sided poster gets pulled out carefully and, looked at, and then popped into a folder for storage, I have no idea why, I always say to myself that one day they’ll come in handy, and the fact they’re great pieces of art also.

The main image is of Thor, looking as though he’s just about to do a Superheroes landing and plunging his Hammer into the ground. It combines two of my favourite things, Superheroes and of course LEGO! 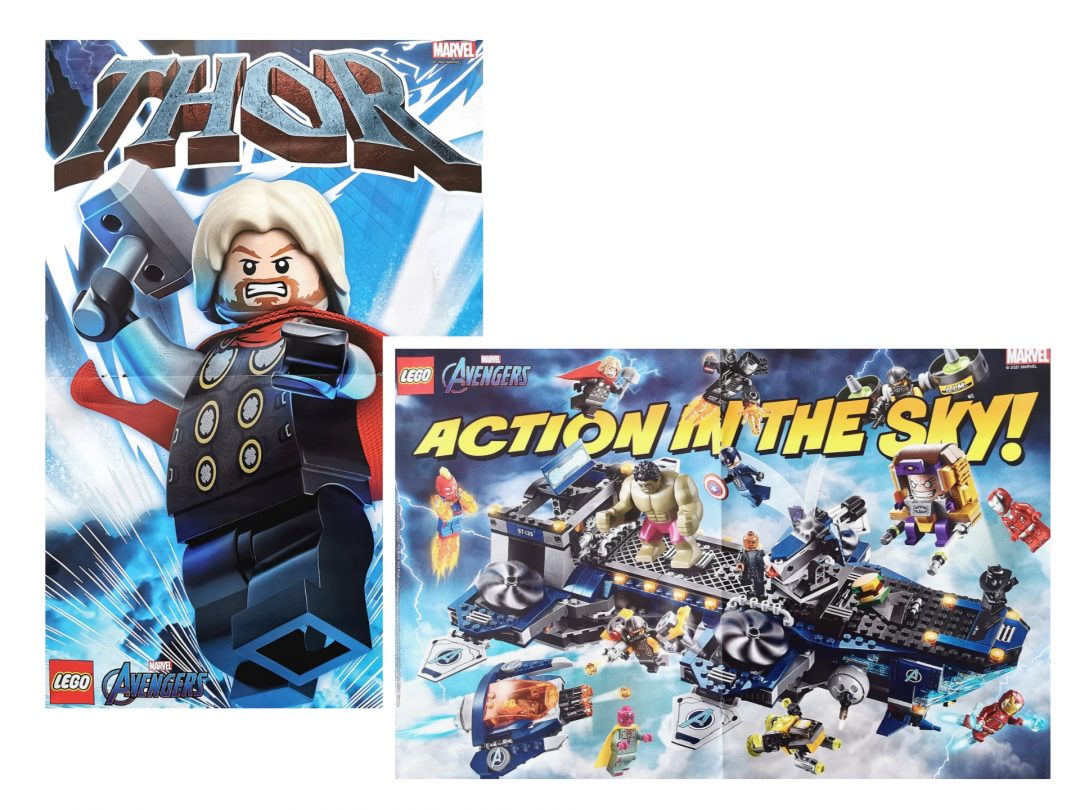 The other side is less of a poster and more of a set preview, the LEGO Helicarrier (76153). It included the main build and the Minifigures included, showing off the characters in action.

I really like this set but the one thing that puts me off about getting it is the scaled-down size. I understand it’s smaller and needs to be easily handled for the younger fans, but it is just too small for me. 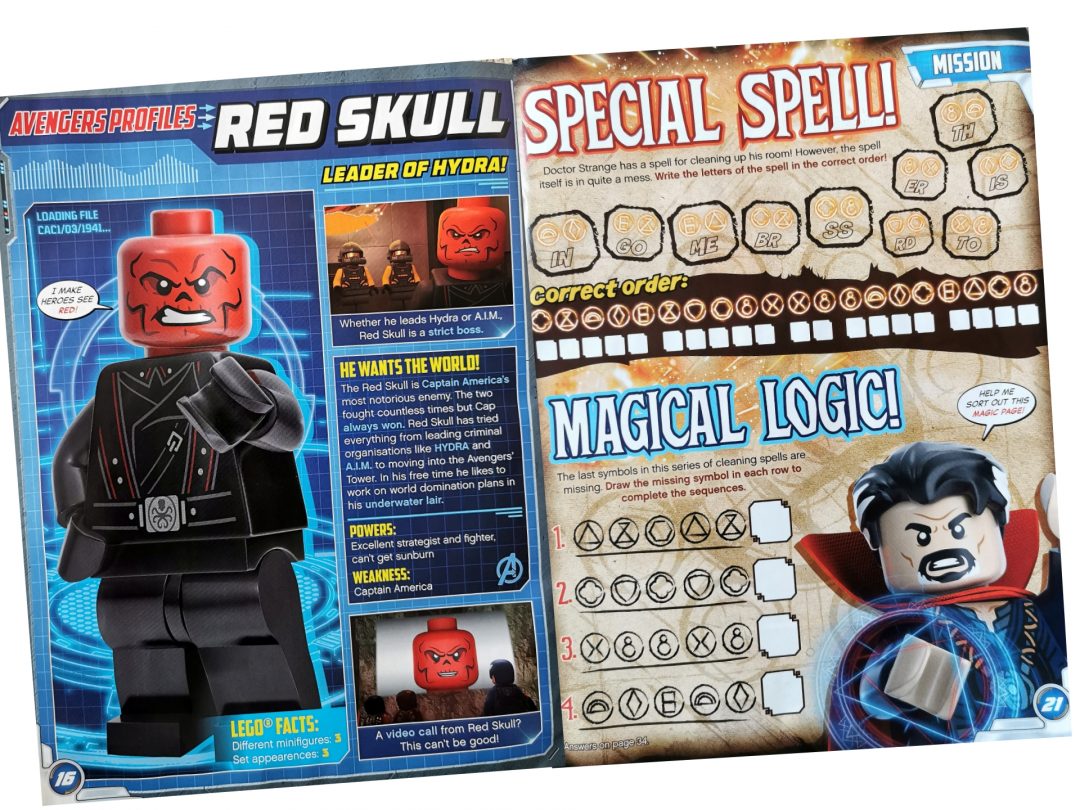 Just before the poster is a face file on one of Captain America’s most feared villains, Red Skull!

It runs through his Powers & Weaknesses, as well as a short backstory and his countless confrontations with Cap himself. For the older fans the inclusion of how many Minifigure incarnations and number of sets he has appeared in is the only fact we need to know, and to be totally honest I was surprised to learn he’s been in 3 sets, I thought just the one originally.

Across from the fact file page you’ll find Dr Strange, he needs help cleaning his room which he has a handy spell for. Your job is to decipher the code to ultimately arrange the letters into the right order. 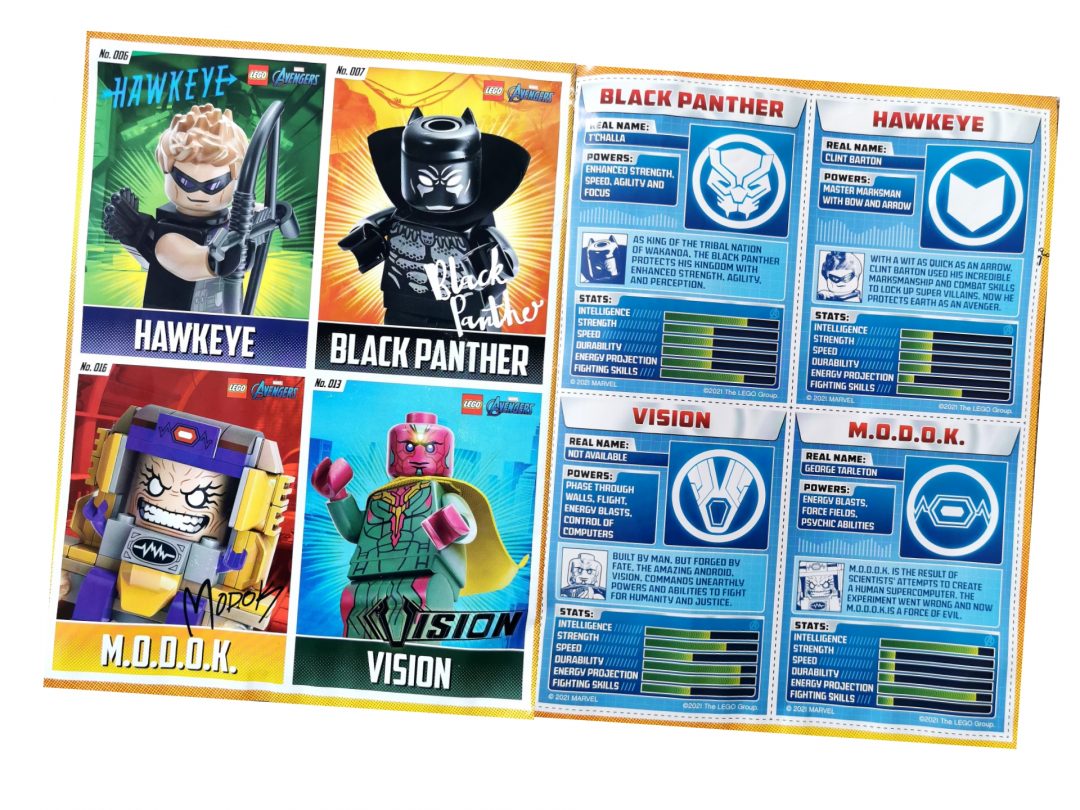 It’s becoming the norm to find these Superhero postcards on the back cover, and personally speaking I rather like them. They have a plethora of facts and stats on each of the covered Superheroes, in this issue we get postcards on Hawkeye, Black Panther, M.O.D.O.K, and Vision.

They’re a great way and potential project for younger fans to make a small, fun, fact ring binder of all their favourite heroes!

Onto the freebie, which if you haven’t seen already is none other than Captain America himself. 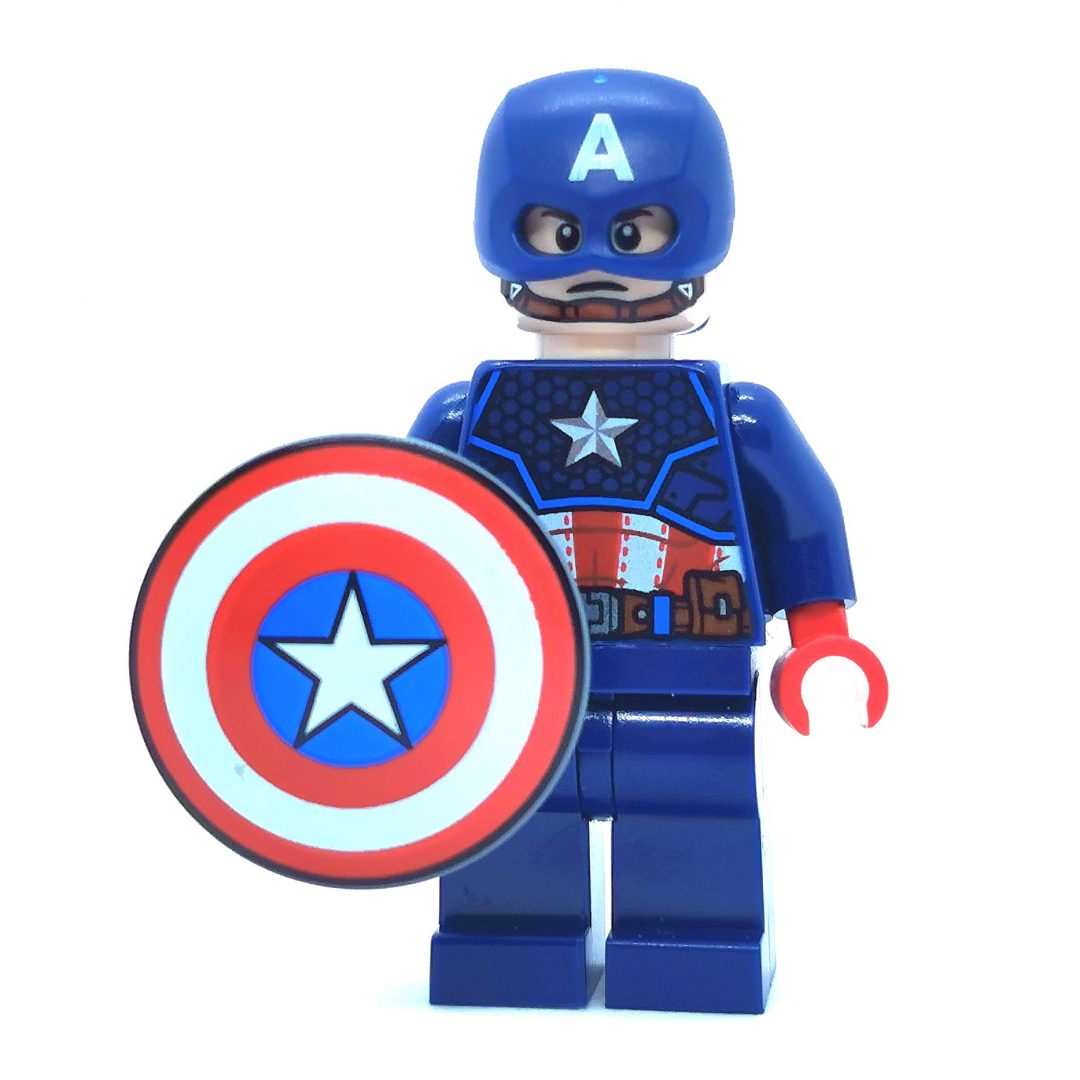 If you haven’t got this character in LEGO Minifigure form yet then I highly recommend picking up this issue as the price, £3.99, is incredible!

He comes fully kitted out too with a helmet & shield, LEGO have even included a hair piece for when he pops his helmet off. I love it when LEGO do this and it shows that they are aware of the Character and set as a whole, granted it’s a small piece but it adds so much more playability to an already feature packed foil bag. 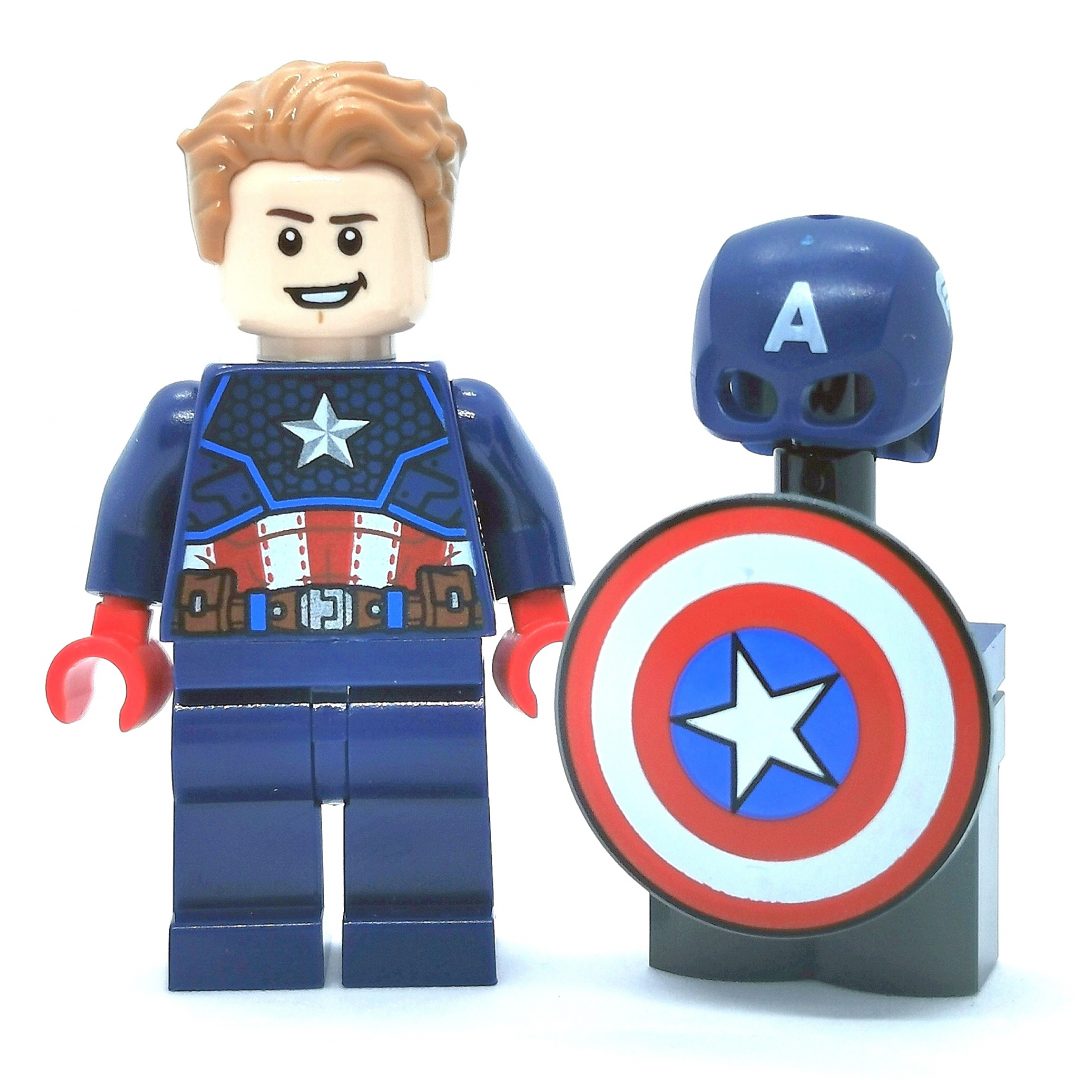 The head has alternate faces, one with a chinstrap and the other without, again for when his helmet is on or off, thank you LEGO for this high level of detail.

The torso is done really well, but sadly nothing we haven’t seen of got before. Never the less it’s great to get such high quality printed parts, the designers do an outstanding job.

When Cap is off duty he can hangup his helmet and shield on the handy display build that’s in included. The whole thing uses just four parts but yet it works surprisingly well, and doesn’t fall over! 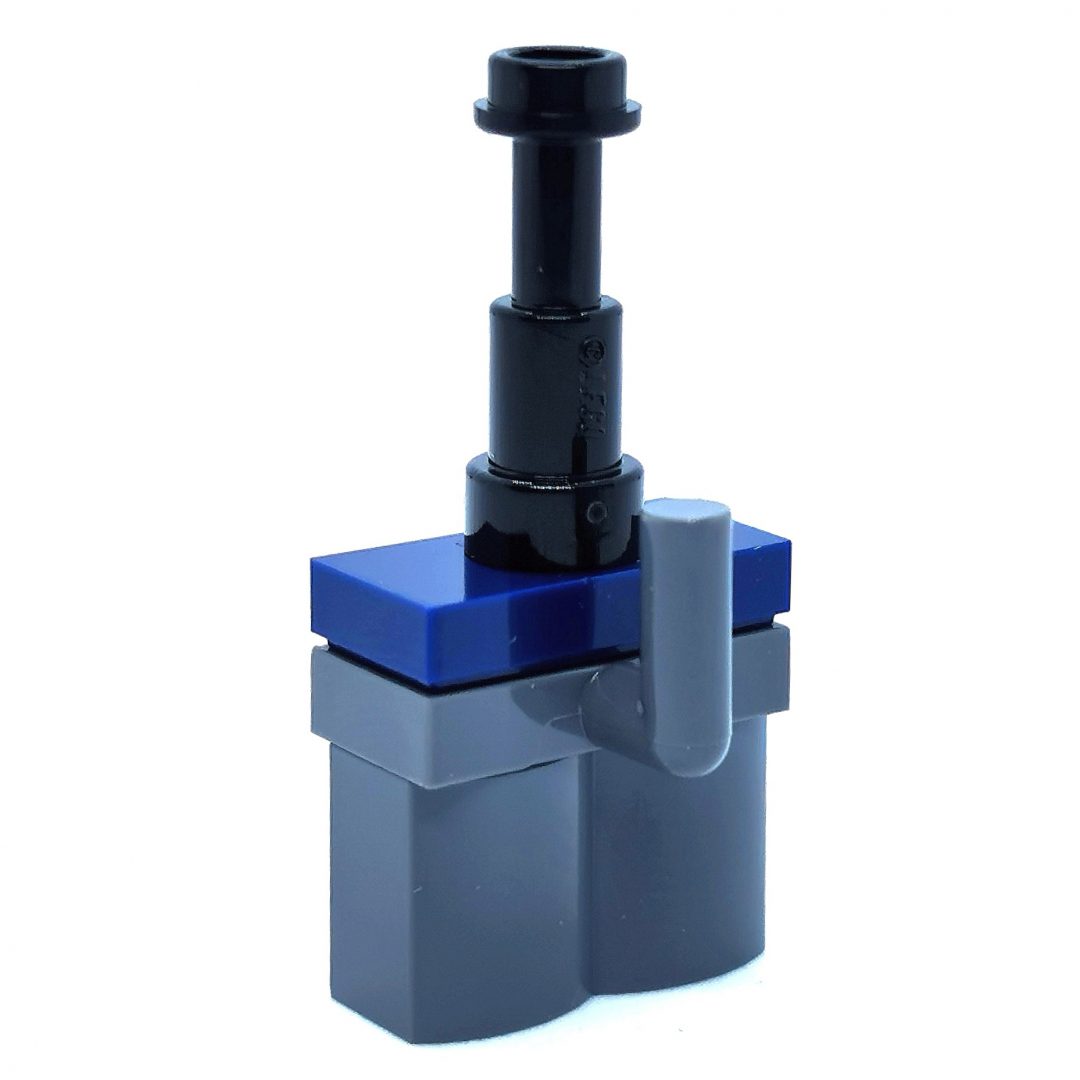 Overall issue 6 of the LEGO Avengers Superhero Legends Magazine is good, the comic story is fun and entertaining for all ages of LEGO fan.

The puzzles and games are also great fun with the addition of the solo player game, as sometimes there aren’t two of you around to play.

Again the Minifigure is really where it’s at, and so far we’ve never missed an issue, as you know we here at The Brick Post only purchase and review what genuinely gets us excited, and this line of magazine doesn’t disappoint.

Pick it up now if you haven’t all ready!

If you fancy a sneak peek at the next issues freebie Minifigure take a look below, it’s another fantastic character and one we don’t really to often. 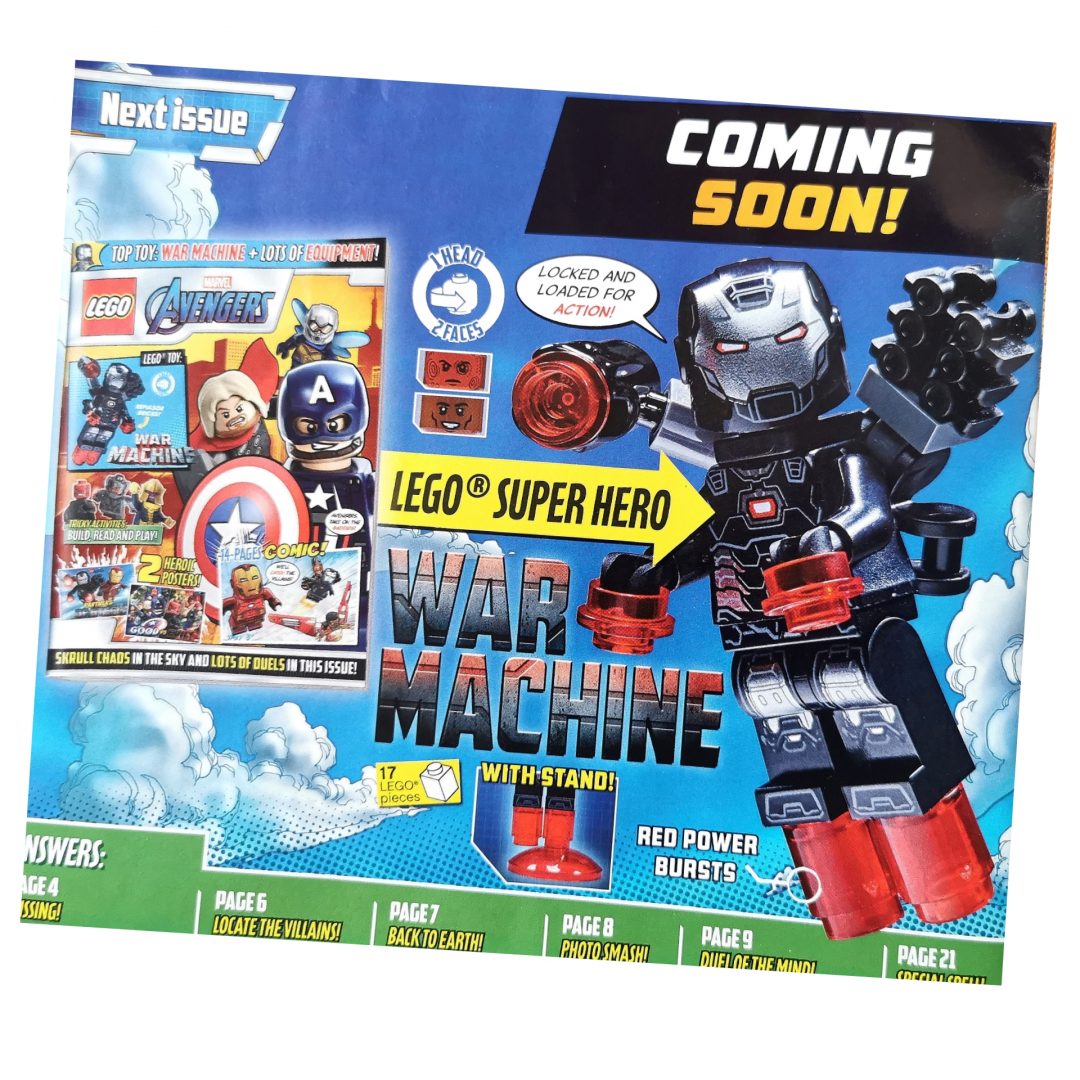 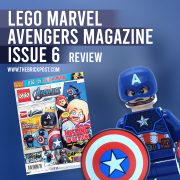 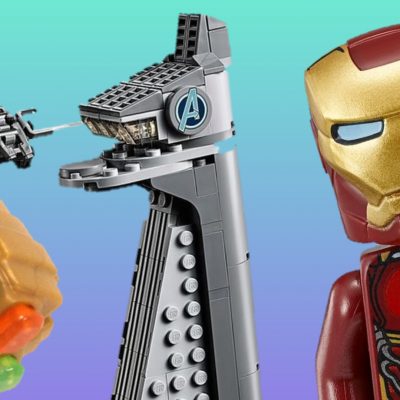 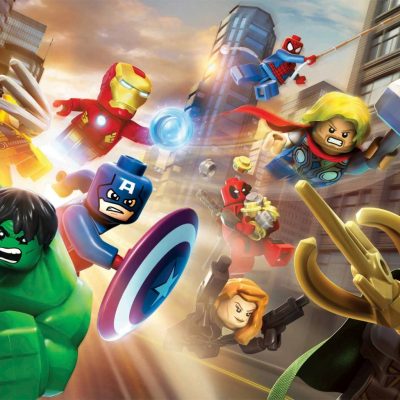