It must be that time of the month again when we get inundated with LEGO magazines, usually a week or two into each month we see a plethora of issues ranging from LEGO City, LEGO Explorer, LEGO Friends, LEGO Ninjago, LEGO Star Wars, and of course the one we’re going to review today, LEGO Jurassic World! 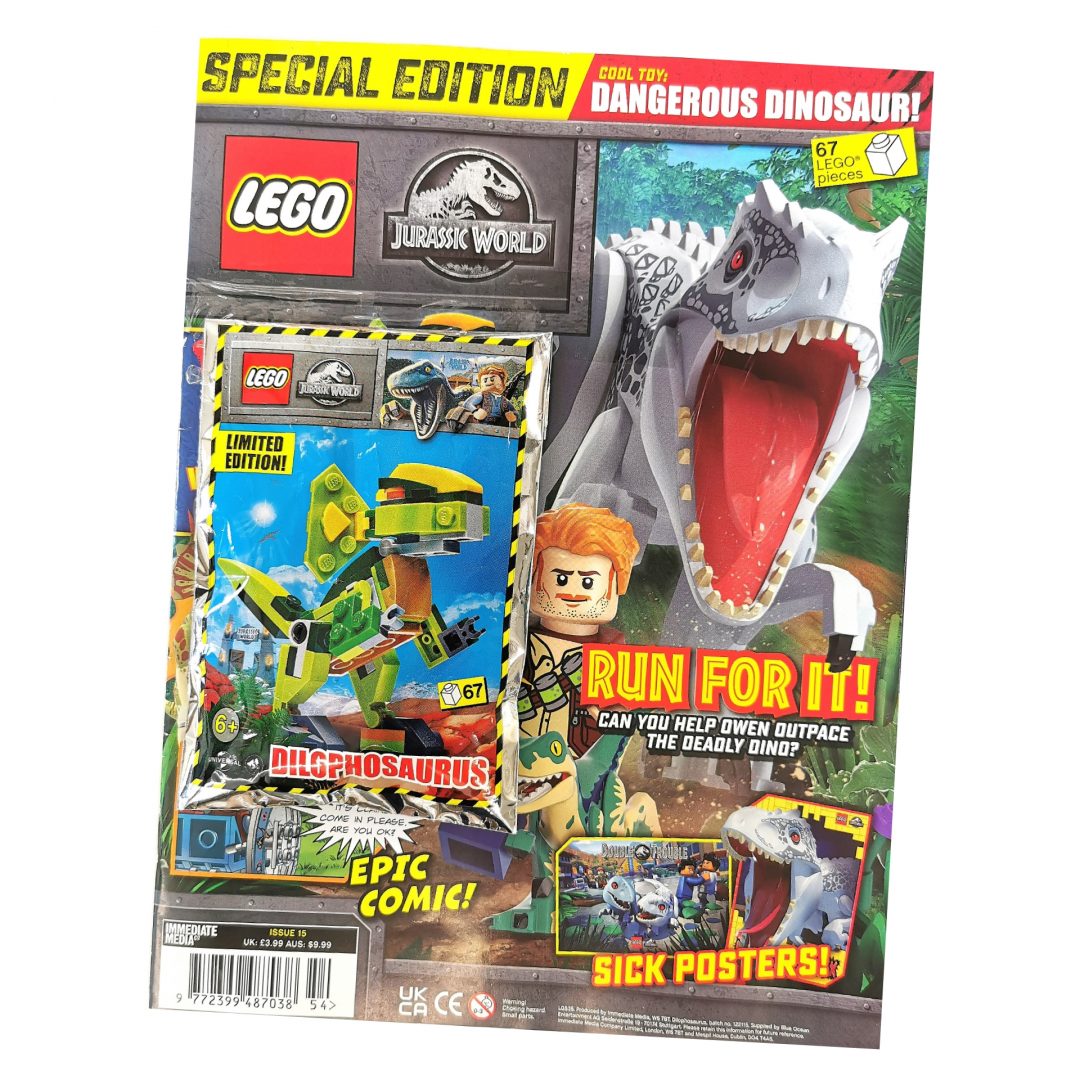 Whats cool about this particular issue is that it holds the title of ‘Special Edition‘ which means we get a slightly more substantial build. There also seems to be a theme growing and so far we’ve received a brick-built Dinosaur with most past ‘Special Edition‘ issues.

We’ll run-through what you will see inside this issue of LEGO Jurassic World Magazine Issue 15, highlighting fun and exciting activities & puzzles as well as the parts and final build of the included Dilophosaurus! 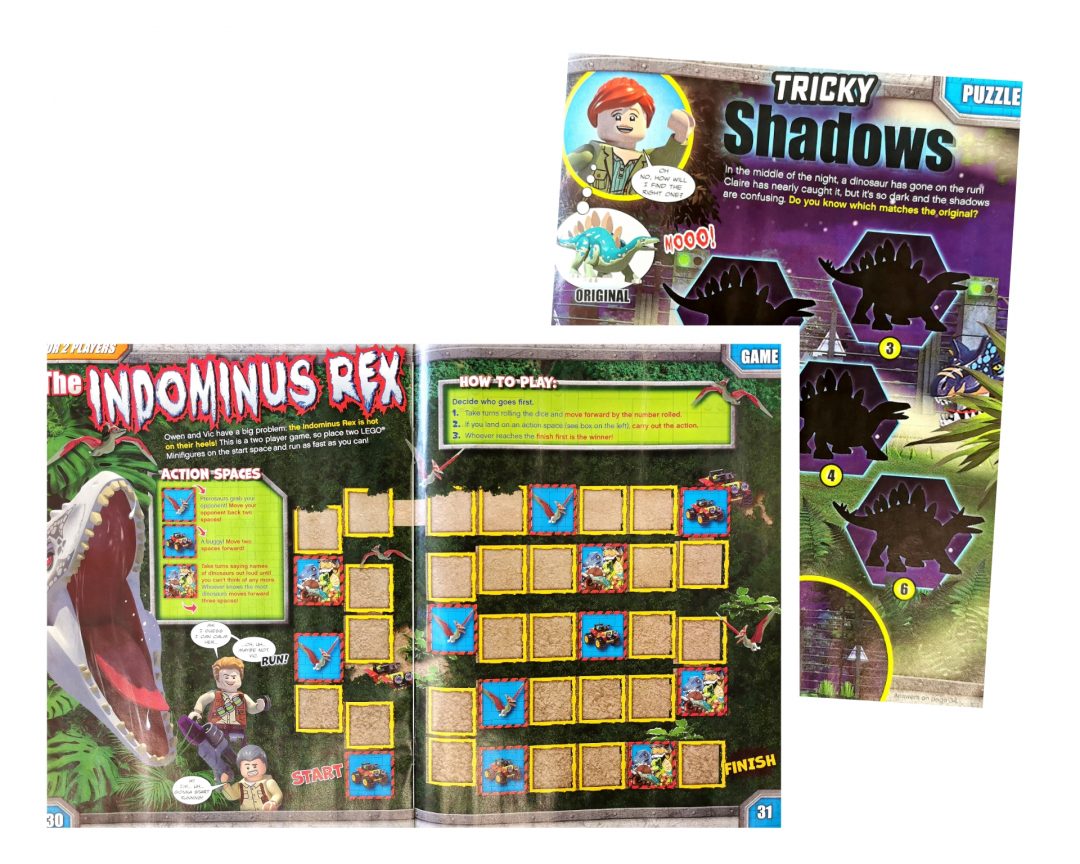 The two player dice game sounds fun and interesting, you need to grab two Minifigures for the counters and a dice. You essentially need to escape the Indominus Rex, if you land on an Action square you’ll need to complete it before moving on.

The other puzzle has you looking closely as each of the Stegosaurus’ to find the one that matches the original identically. 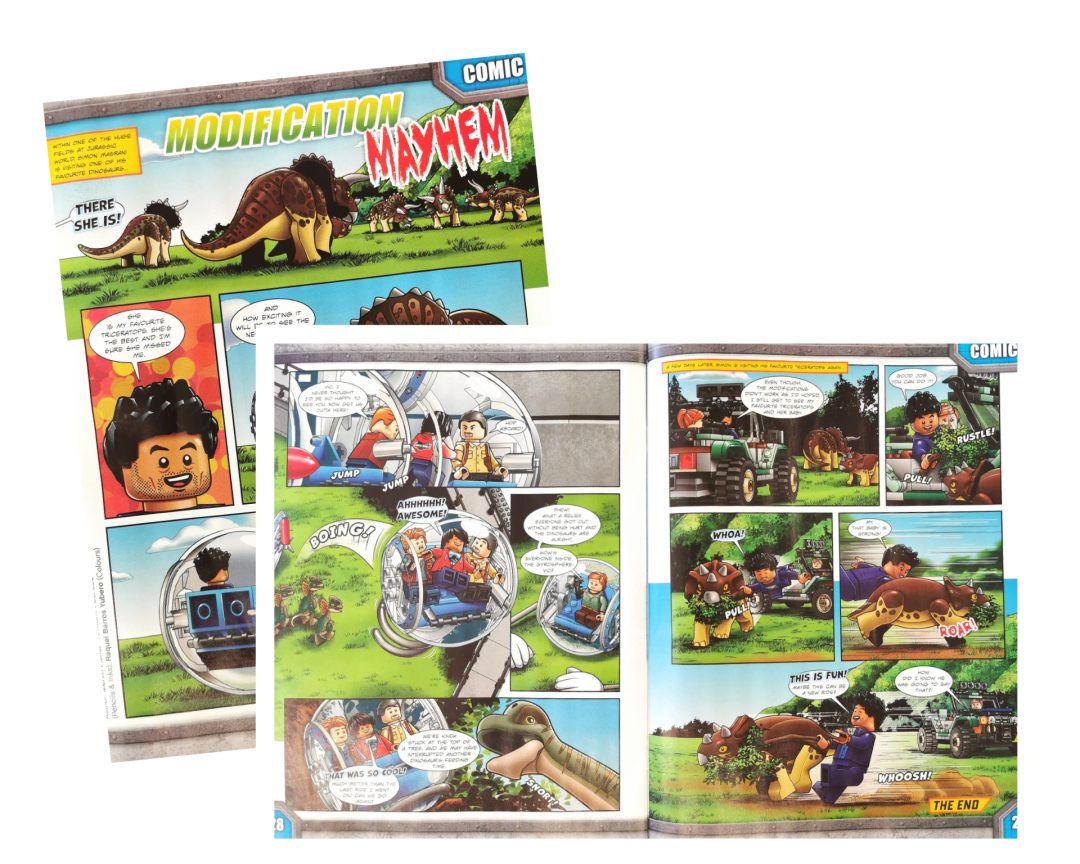 As mentioned above the comic story spans the whole magazine, rather than two completely different stories which we see in other issues, this one focuses on a handful of the main characters from the Jurassic World movies, Owen Grady, Simon Masrani, and a few others.

It’s definitely a worthwhile read and perfect for younger fans to get there teeth into and enjoy the theme, Dinosaurs! 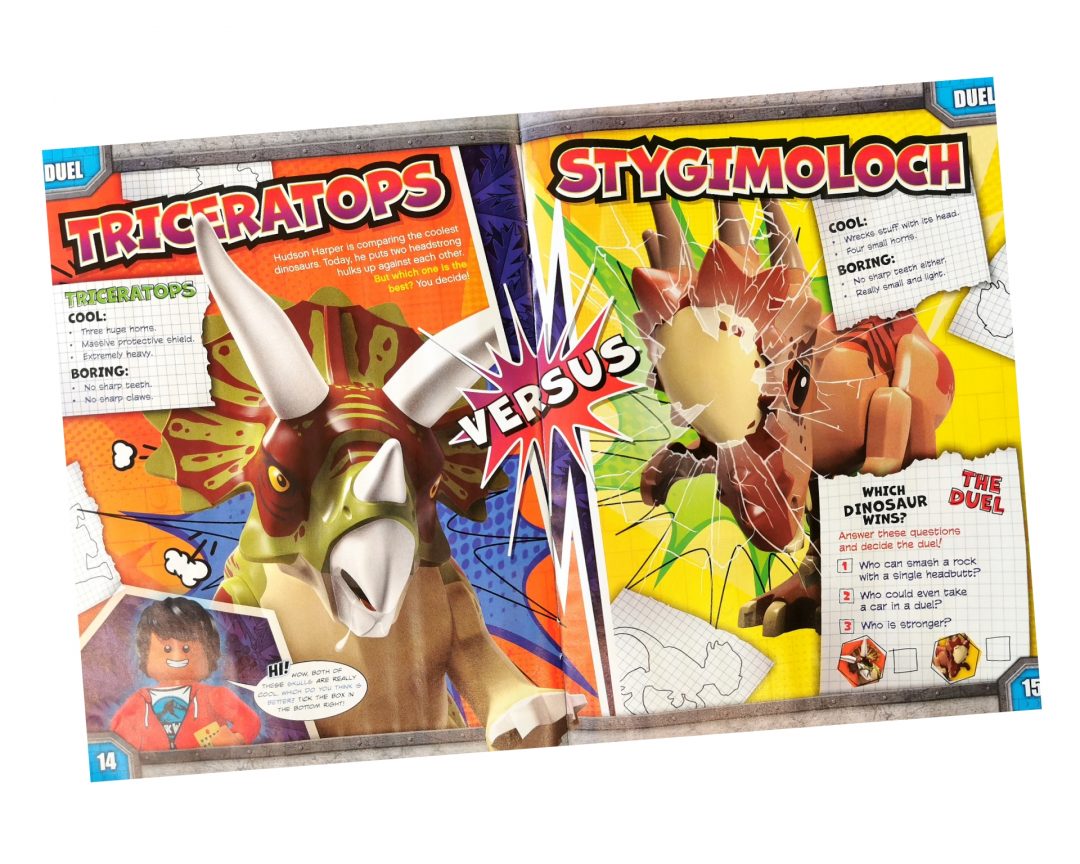 Another nice feature is the Versus double-page spread, where a Triceratops is pitted against a Stygimoloch, not in the usual battle-it-out kind of way but more focused on stats and facts, similar to Top Trumps. 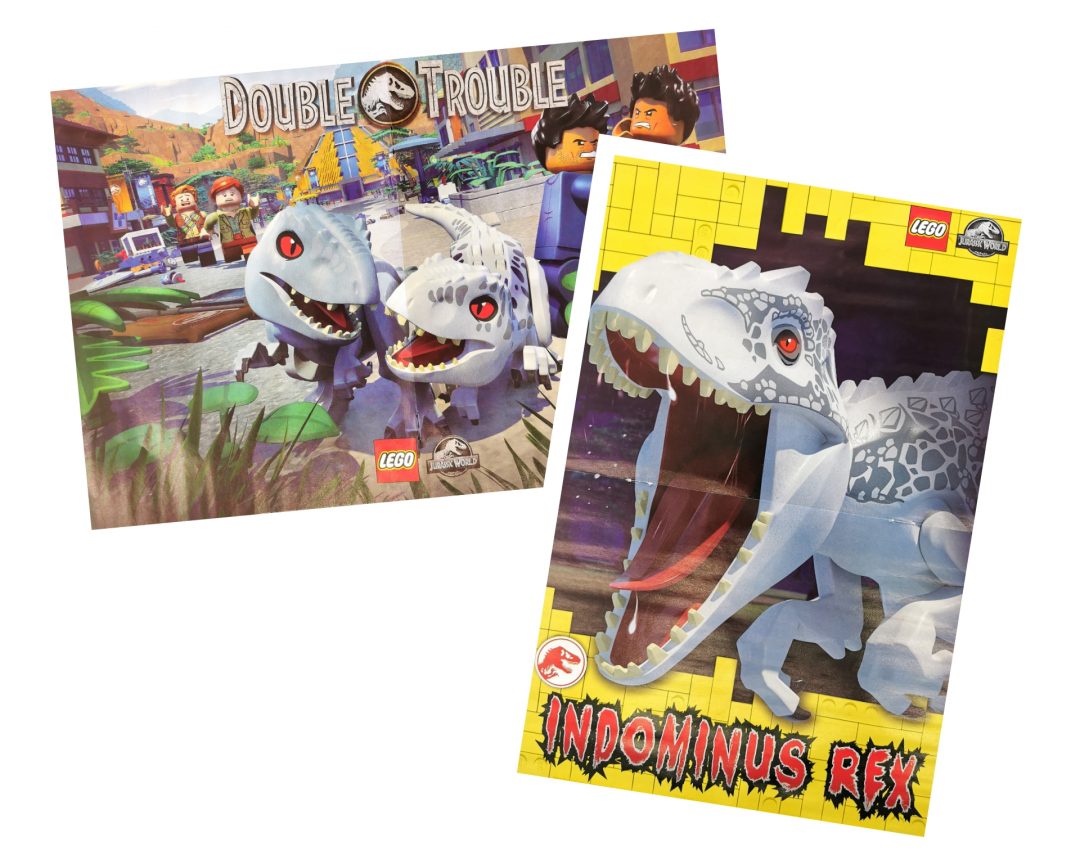 This is usually the highlight of the Magazine for me, aside from the freebie of course, as I keep every poster from every magazine I’ve bought. I think the artwork is stunning and well worth hanging into, especially if you have or are planning a LEGO room.

This issues double-sided poster depicts a Park scene with two baby Dinosaurs that reads ‘Double Trouble‘ and the other side shows the Indominus Rex breaking free. 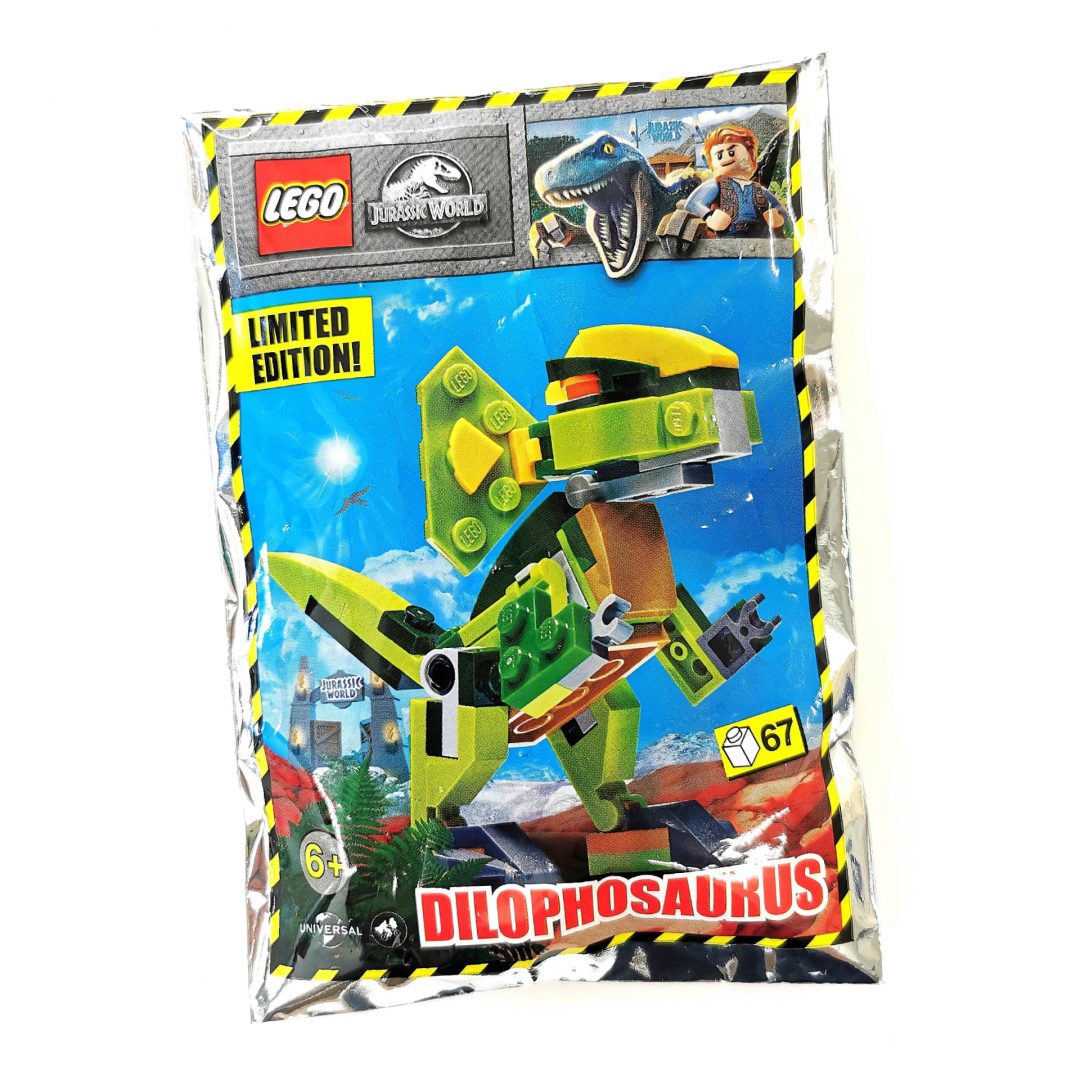 It’s so good to get another brick-built Dinosaur as it has been a while since the last one, a Stegosaurus if I remember correctly?!

This one is a Dilophosaurus, which appeared in the original Jurassic Park movie.

There are 67 pieces in the foil bag and I must say you get a nice selection of colours along with sloped tiles, plates, Technic elements, and hinges. The colours on offer are also bright & colourful, with at least three different shades of green available. 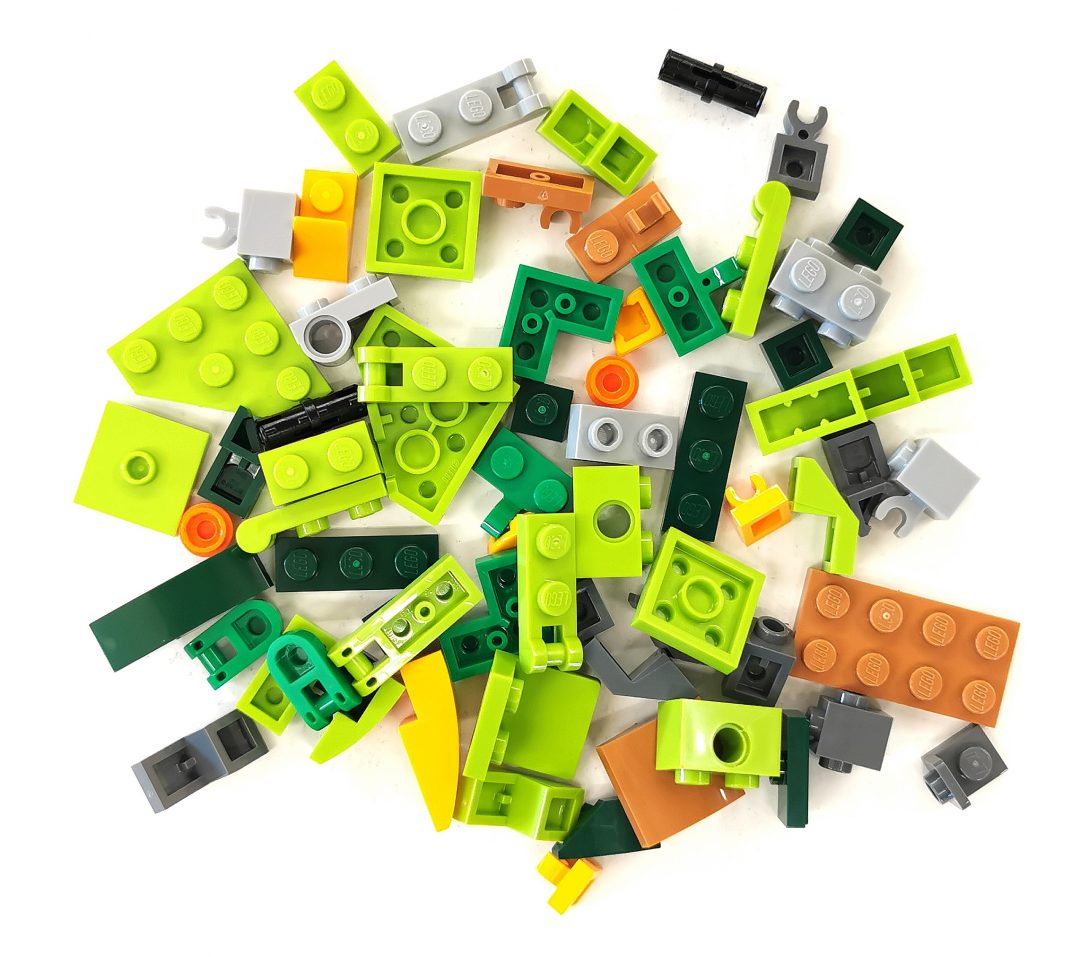 The build itself is simple and straightforward and features mostly standard building techniques. When constructing the head I like the way the 1×2 angled slopes sit and represent the eyelids.

You build the legs separately and in mirror-image of each other, same goes for the arms. It’s body is quite bulky but over a good size to hold and balance the head and limbs.

Nothing really stands out build-wise which is OK, and seeing as it’s a ‘free’ build included with a kids magazine it’s pretty decent! 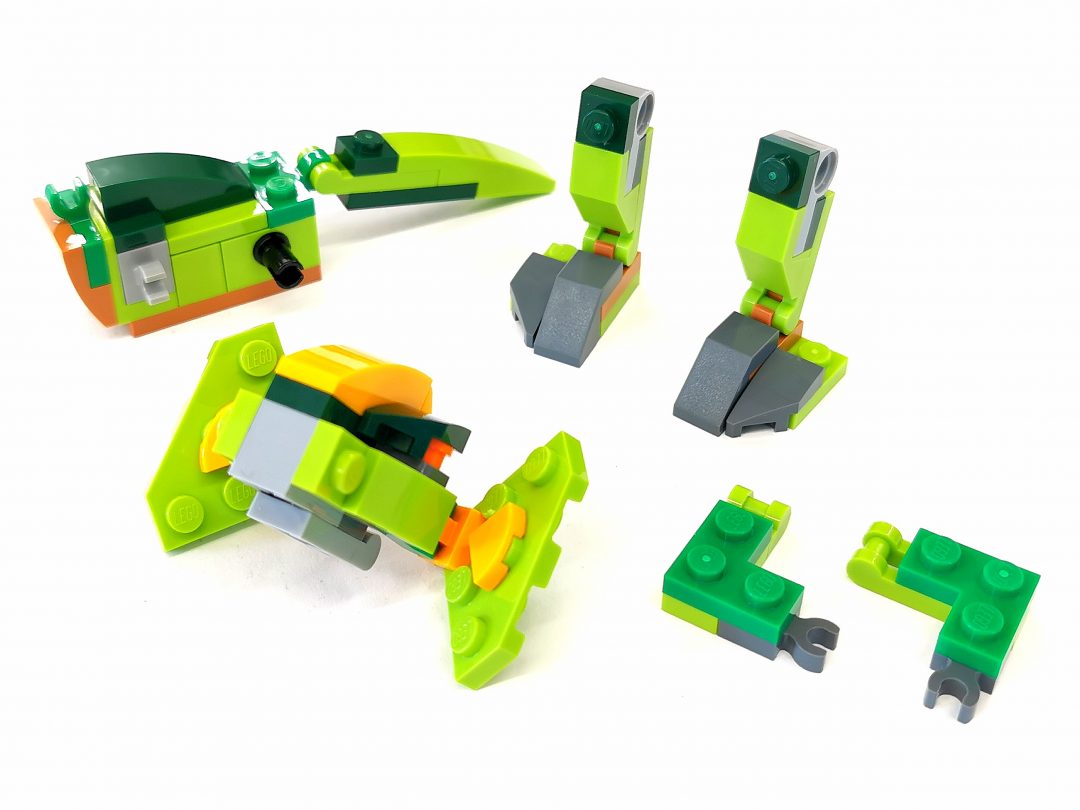 Sadly the articulation is something to be desired, as the Dinosaur has very limited movement, the head can only look up and down, the hands can only flap like a bird, it’s the legs and feet that actually have the best articulation and move how they would in real-life.

The overall build looks good and is the same scale and similar part count (give or take a stud or two) to the others in the brick-built Dinosaur collection. 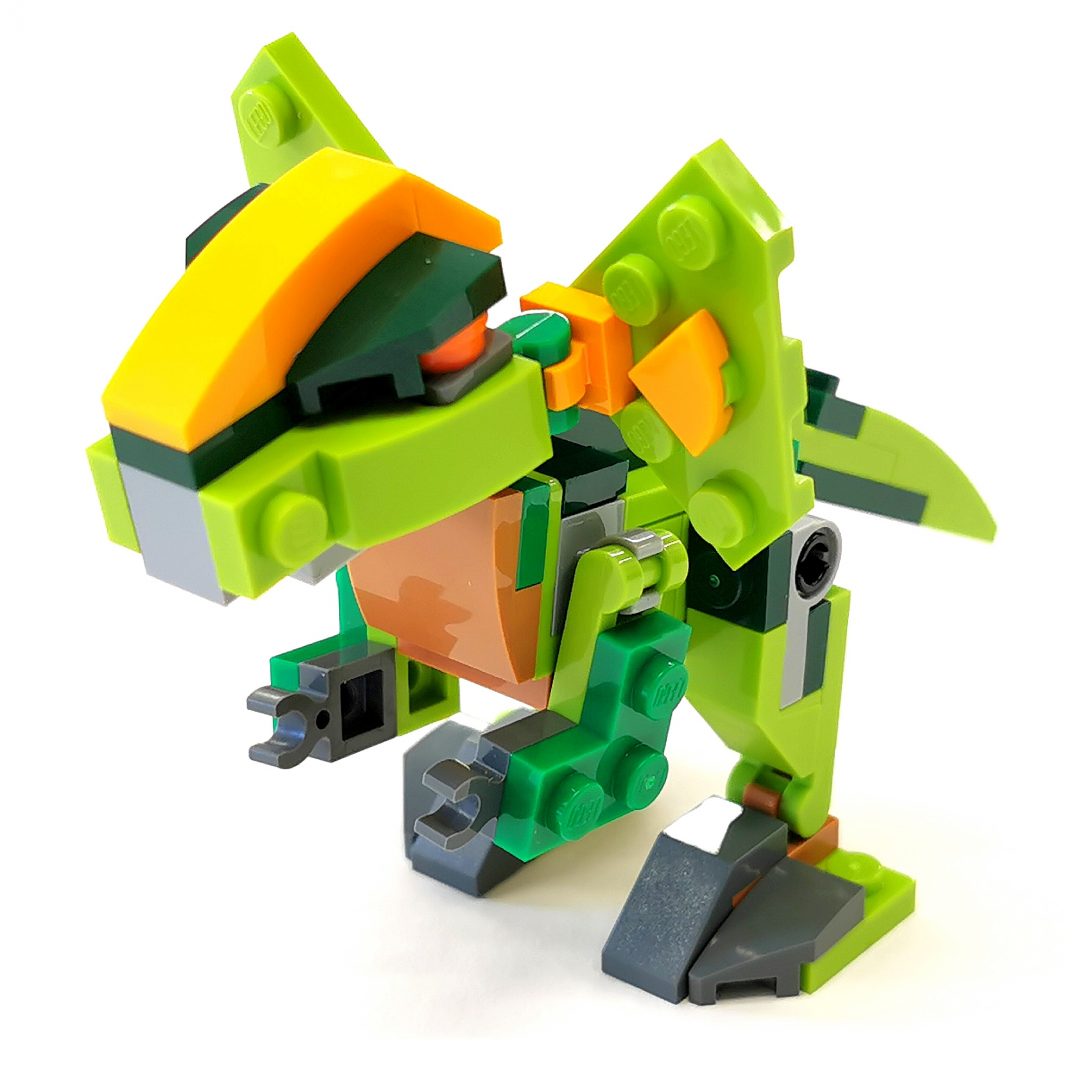 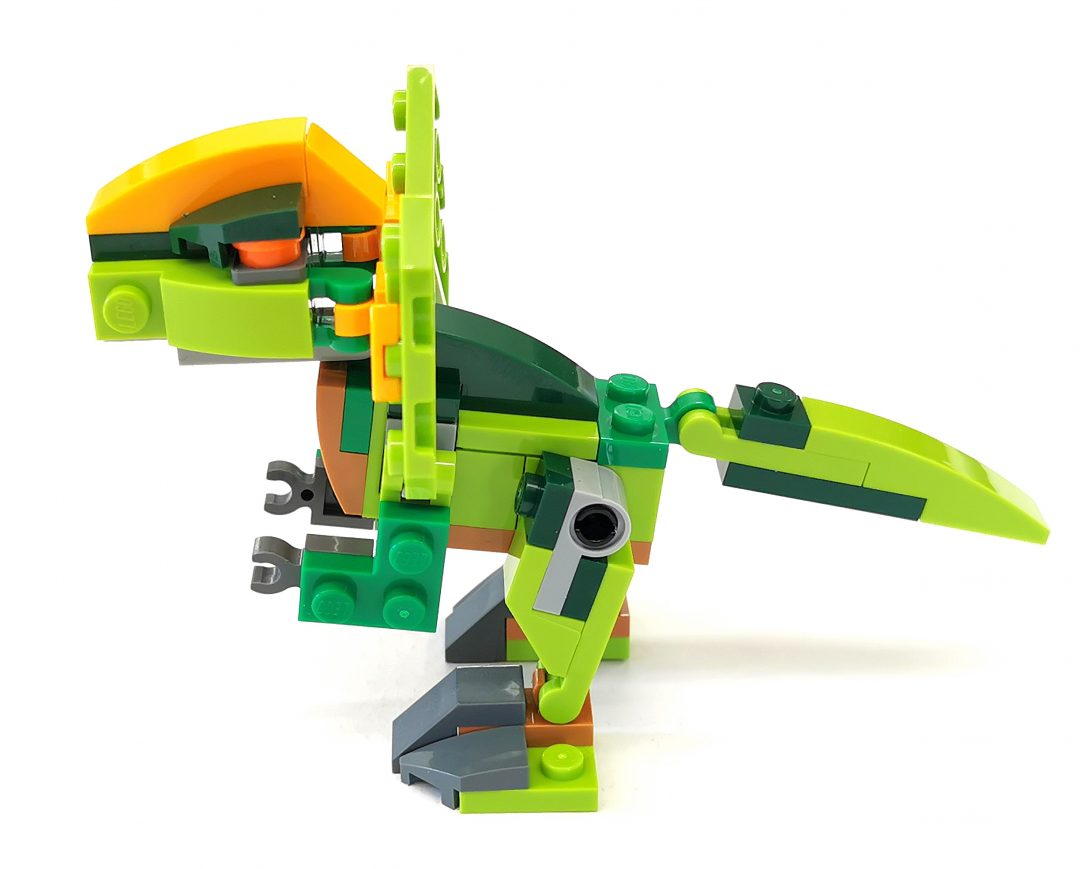 So far we have a T-Rex, Triceratops, Stegosaurus, and of course now the Dilophosaurus, you’ll agree that this is becoming quite a cool and substantial collection.

The gang so far look incredible together even though their sizes are all off, as the Dilophosaurus was not bigger than a T-Rex!

Take a look at all of the brick-built Dinosaurs below and let us know which one is your favourite. Also head over to our Instagram account where you can vote in our ‘Versus’ feature, Dilophosaurus Vs T-Rex and so on. 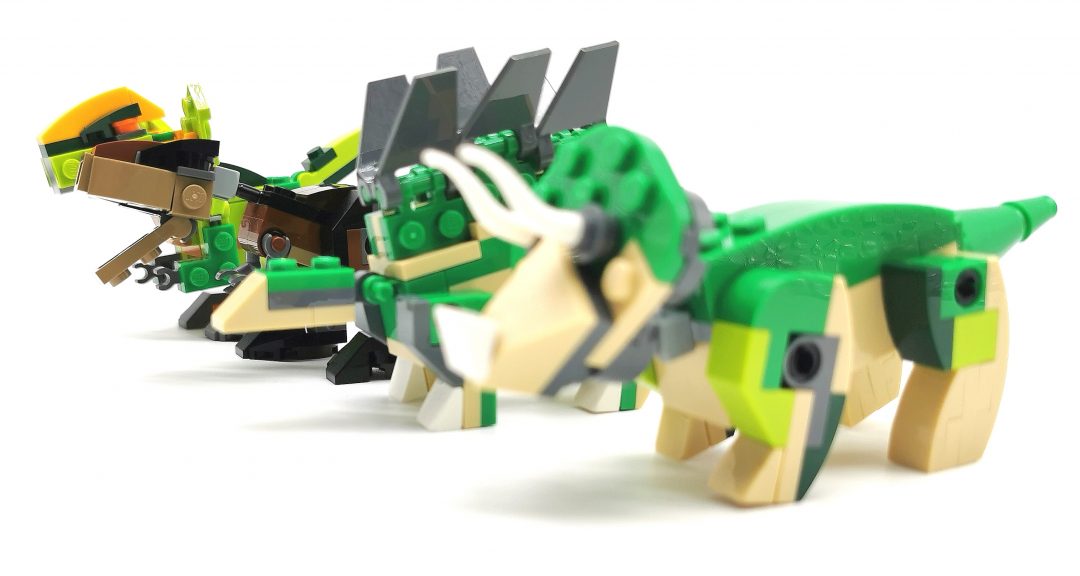 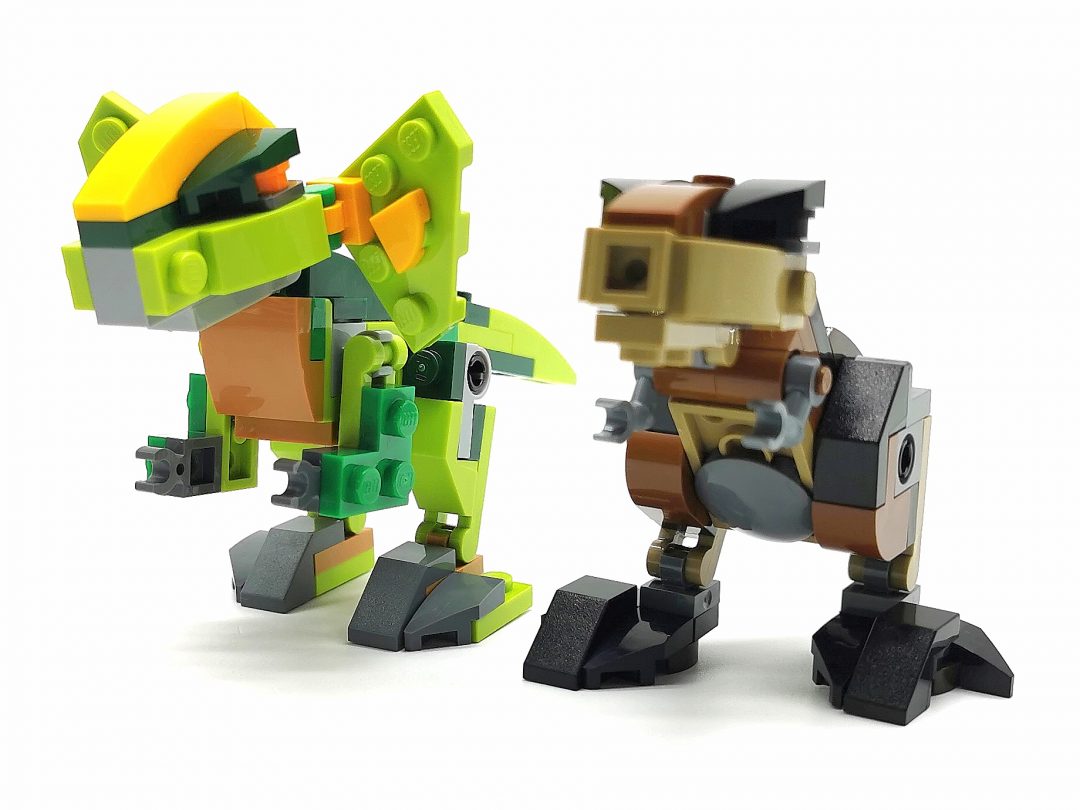 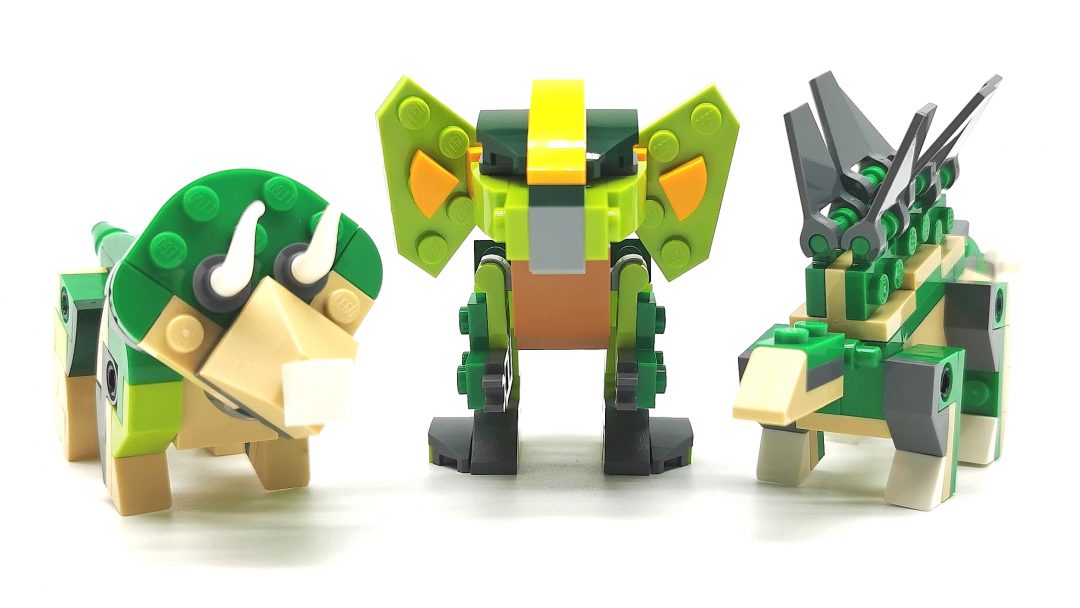 Thank you for taking the time to read this review, we truly appreciate it. Please feel free to ask any questions in the comments below. 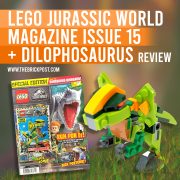 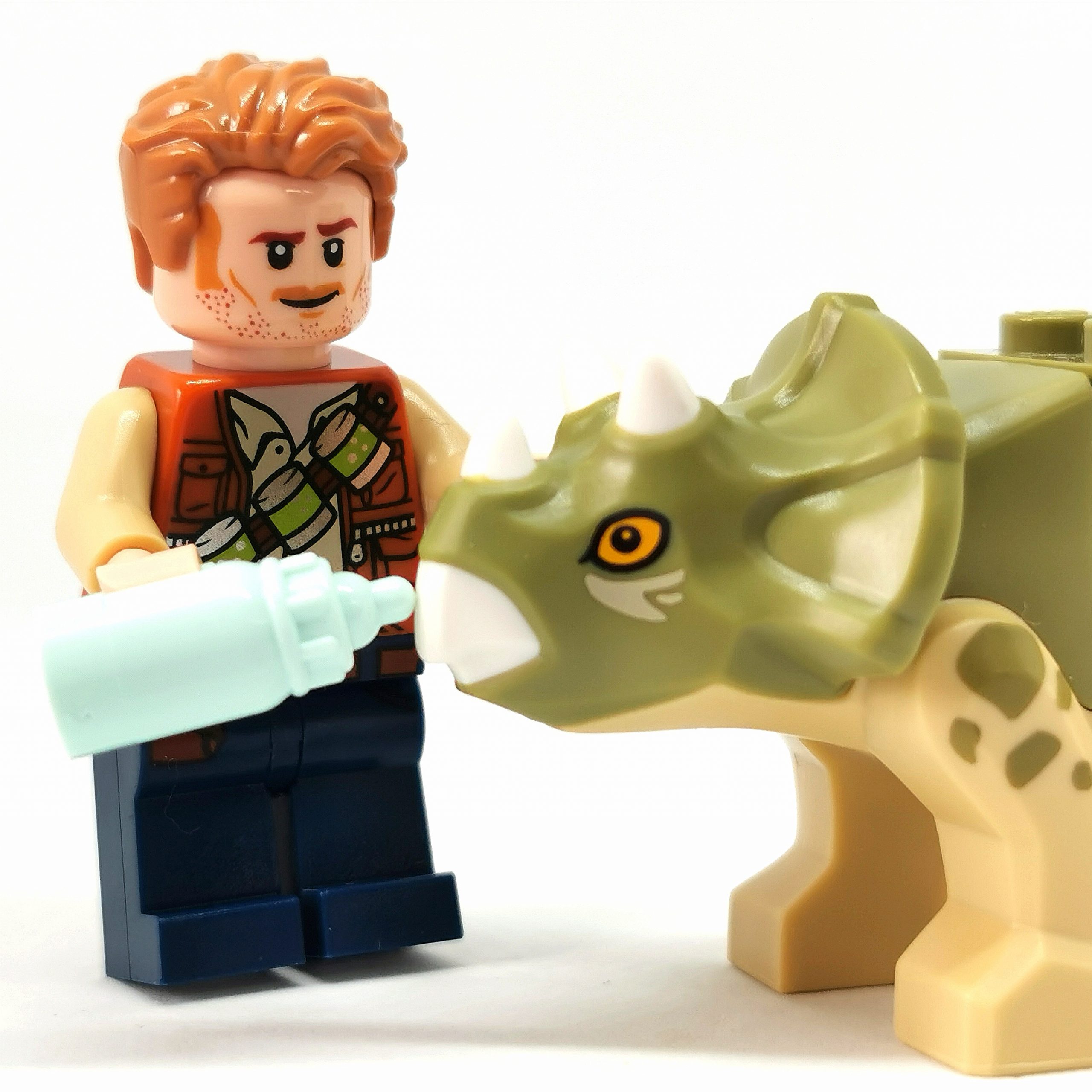 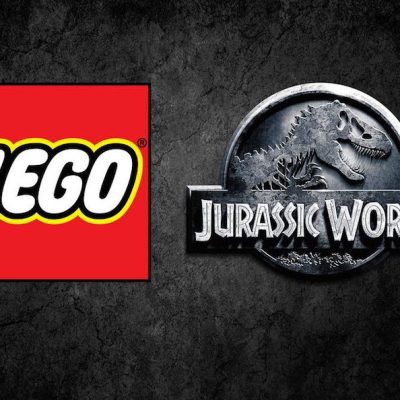