LEGO have now officially revealed and announced the latest set to come from the LEGO Ideas platform, The Globe (21332)! 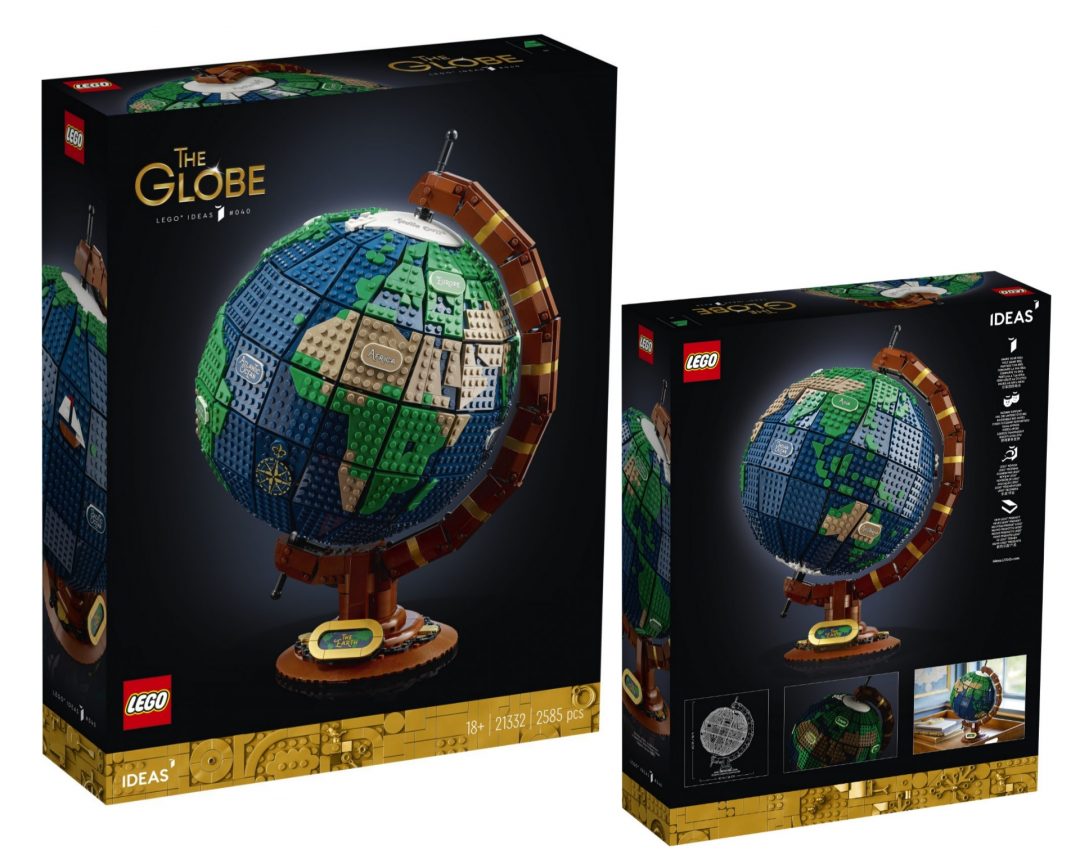 The original product idea came from Guillaume Roussel (Disneybrick555), and features the a realistic brick-built Globe with continent name plates that glow in the dark. It is also quite a substantial size (40cm height, 26cm width, and 30cm length) and piece count coming in it 2585 elements, and it is able to spin freely thanks to the many LEGO Technic parts that makeup the insides.

Let us know in the comments what your thoughts are on this new set, we think the techniques used in its construction will be very interesting and will definitely make for an impressive display piece as well as a basic educational tool.

Checkout the gallery and official details below:

The 2585-piece set beautifully shows a realistic, customizable vintage brick-built earth globe, with printed names of the continents and oceans that glow in the dark so you can display and see the world at every moment. In addition, once built the set spins, a first for a LEGO globe at this scale.

The set was designed as part of the LEGO Ideas® platform, a LEGO initiative that takes new ideas that have been imagined and voted for by fans and turns them into reality. France-based LEGO fan, Guillaume Roussel, was responsible for creating the concept for the LEGO Ideas The Globe – having been inspired by the tales of Jules Verne. Talking about how he approached the design, Guillaume said: “When approaching the design, I asked myself ‘what could be creative, educational and touch most of the world?’ And the answer was just ‘the world itself’”.

Federico Begher, LEGO Group Head of Global Marketing for Adults added: “What is so wonderful about this set is that, with a little imagination, it allows fans to discover the world through LEGO bricks. The globe is a symbol of dreams and aspirations of travel to come for all who are seeking a bit of adventure or for those looking to learn about our world. When reviewing Guillaume’s set we could see the passion he had for travel and adventure, but also for inspiring building fans everywhere. Our designers also relished the challenge of making this set spin.”

LEGO Ideas Earth Globe (21332) will be available from LEGO.com and LEGO stores globally from 1st February 2022 priced at EUR 199.99/$199.99 USD.
More information can be found online by visiting: www.lego.com/globe

To find out more about the LEGO Ideas platform and see how your LEGO ideas could be turned into reality visit https://ideas.lego.com/