I recently posted a review of the LEGO Speed Champions Aston Martin DB5 (76911) Bond Car and mentioned that I “don’t really do Speed Champions sets” but yet here I am reviewing another ‘must have‘ vehicle, this time based on the Dodge Charger R/T from Fast & Furious!

I am in no way a fan of the movies, having only seen the first one where this vehicle was featured. So I know enough to get me by, just.

As always I build smaller sets live on our Instagram channel (@thebrickpost) generally having fun and chatting to the viewers and answering questions. Please follow us there as we normally go live mid week and build a set. 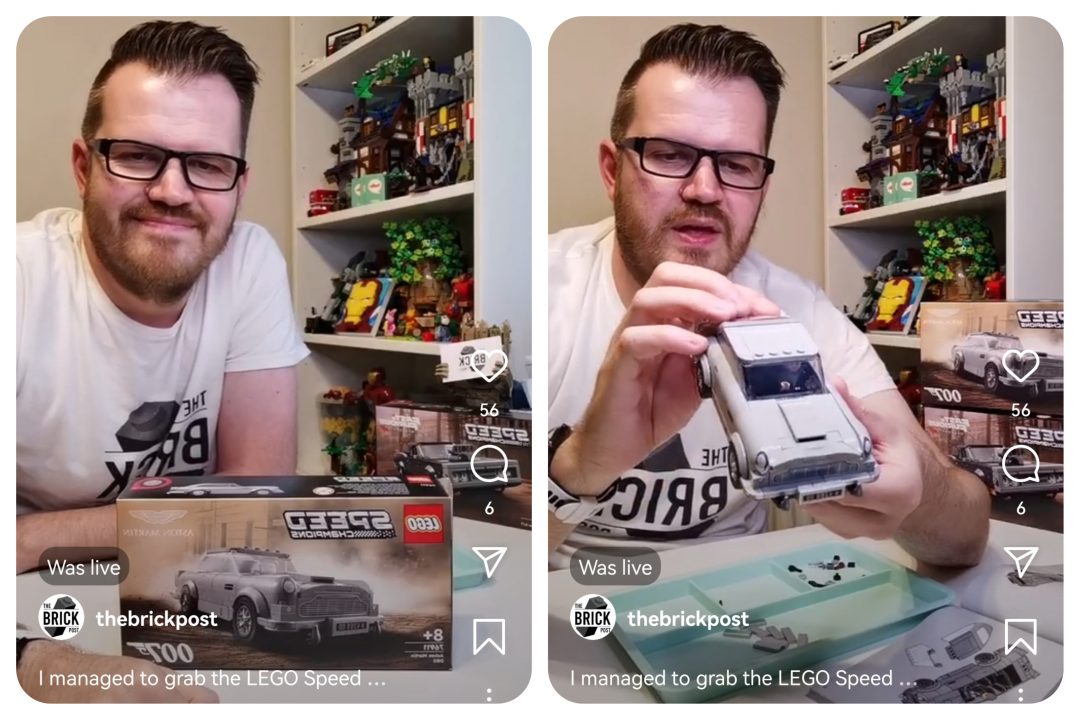 Without further a-do, let’s get into the review:

As this was built live I didn’t really get the chance to take the box art in until taking photos afterwards, I must say the artwork is great as usual and features the built set in the centre and a suitable road and building in the background. The set details are on the box, this time in the bottom-left corner. The name and set number (76912) and recommended age rating (8+) are all there, you’ll notice there isn’t a part count as here in the UK they feel it is important enough to have it on the box, I for one would like to know how many parts inside from the get go. 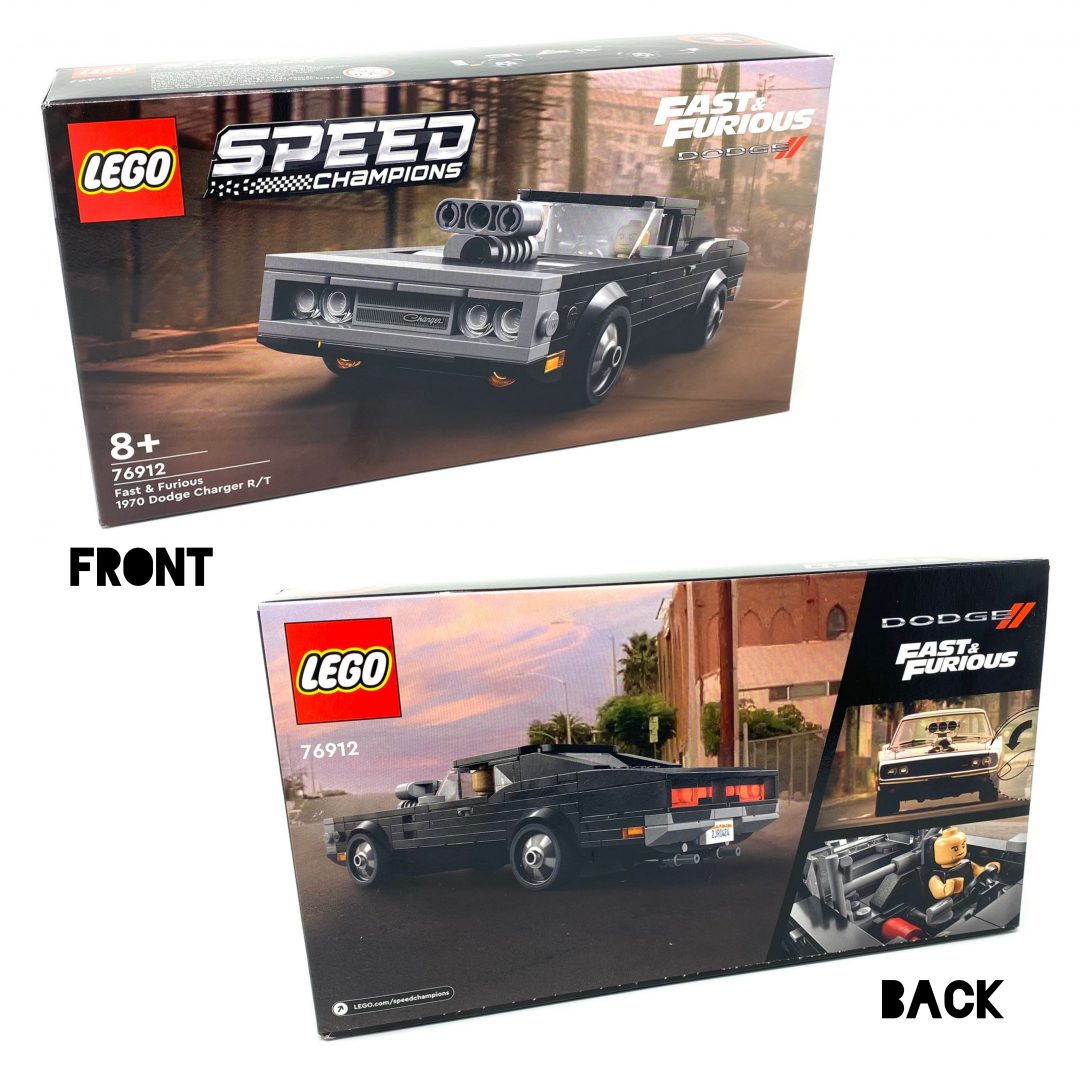 Thankfully the sticker sheet is quite small and contains only 5 stickers, a Dodge Charger R/T grille, a license plate, and other car decals.

Being a new set the instruction manual is of the ‘no frills‘ variety and as I have said in the last few reviews I really don’t mind the is new style and it grows on me each time I see one,at the end of the day its there to help you through the build process, which it does extremely well. 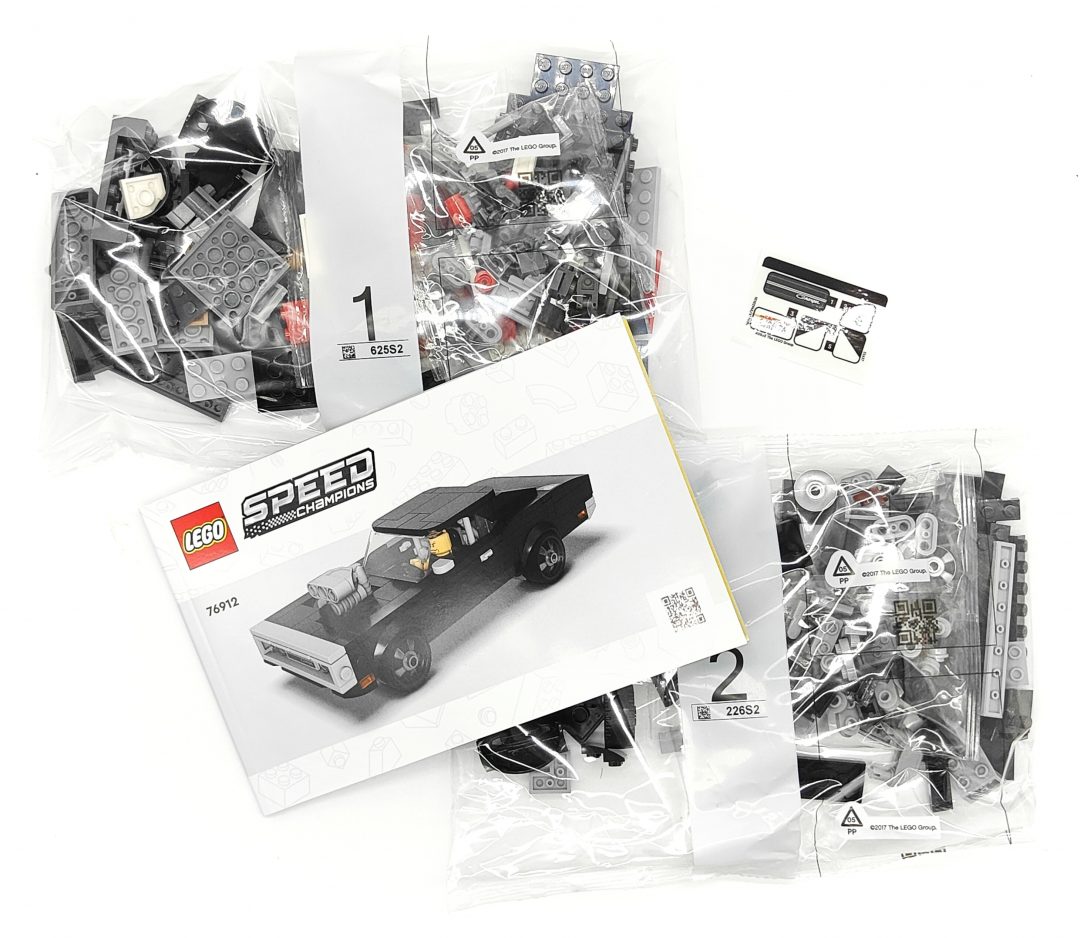 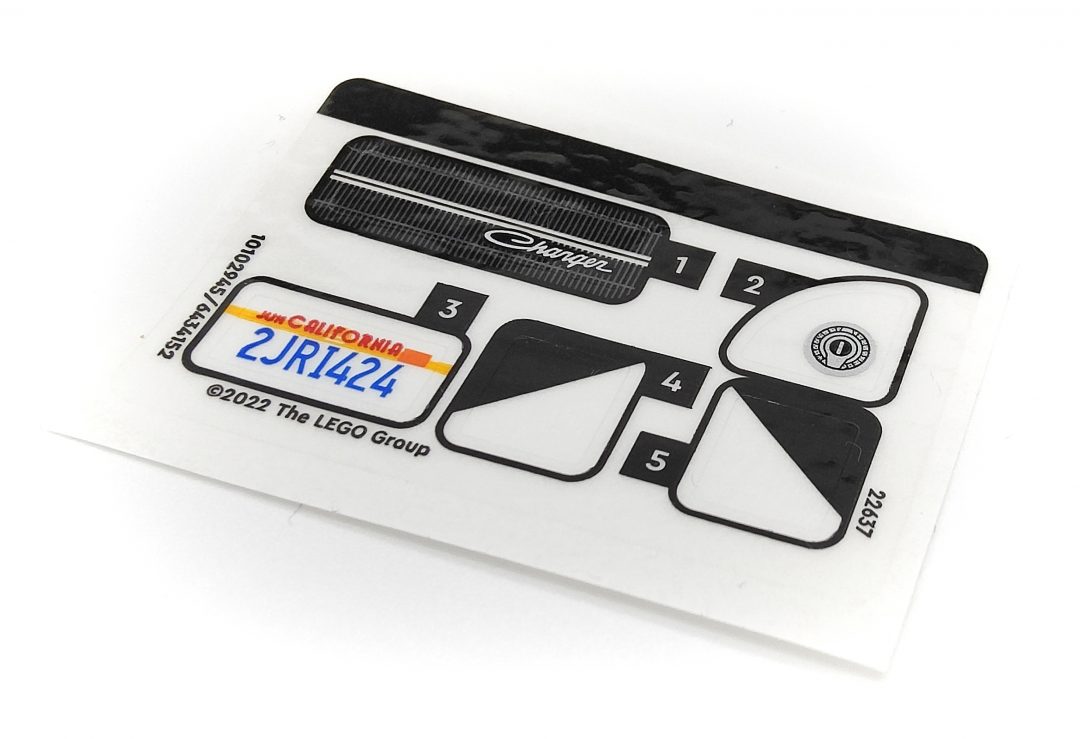 Starting off with the base of the vehicle and working your way up, the build starts of like any other LEGO Speed Champions set, a large black moulded piece is used as the base and layering up the sides and front with brick & plates. One part use in particular is done very well and works a treat when complete, I’m talking about the small rollerskate piece that is used for the door handle, so simple but pure genius! 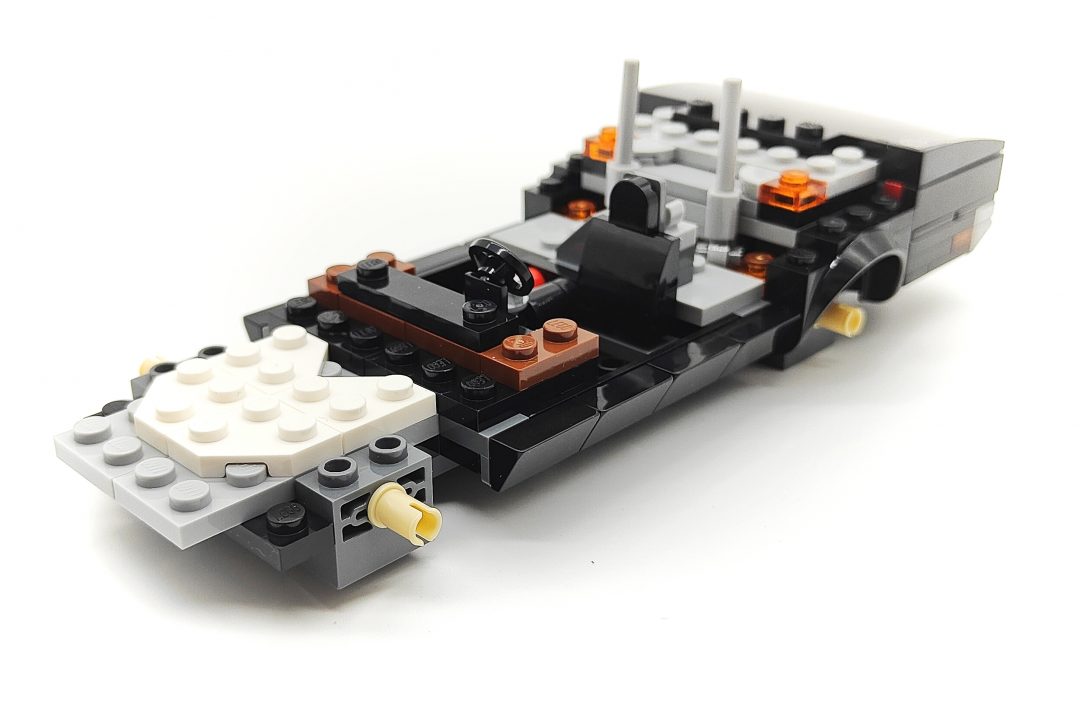 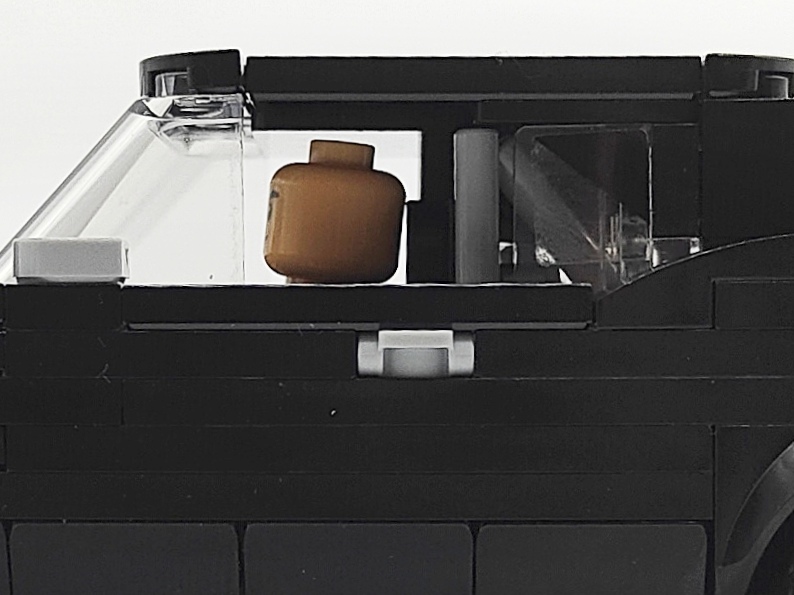 The front and back of the car looks great, with the front being made separate to the rest and slitting into place once built. The boxed style of the Dodge Charger is captured quite well here and truly finishes off the set.

They’ve even included a roll cage, how cool is that?! With 4 bars that clip into place and are simply push down slightly to create the criss-cross effect. 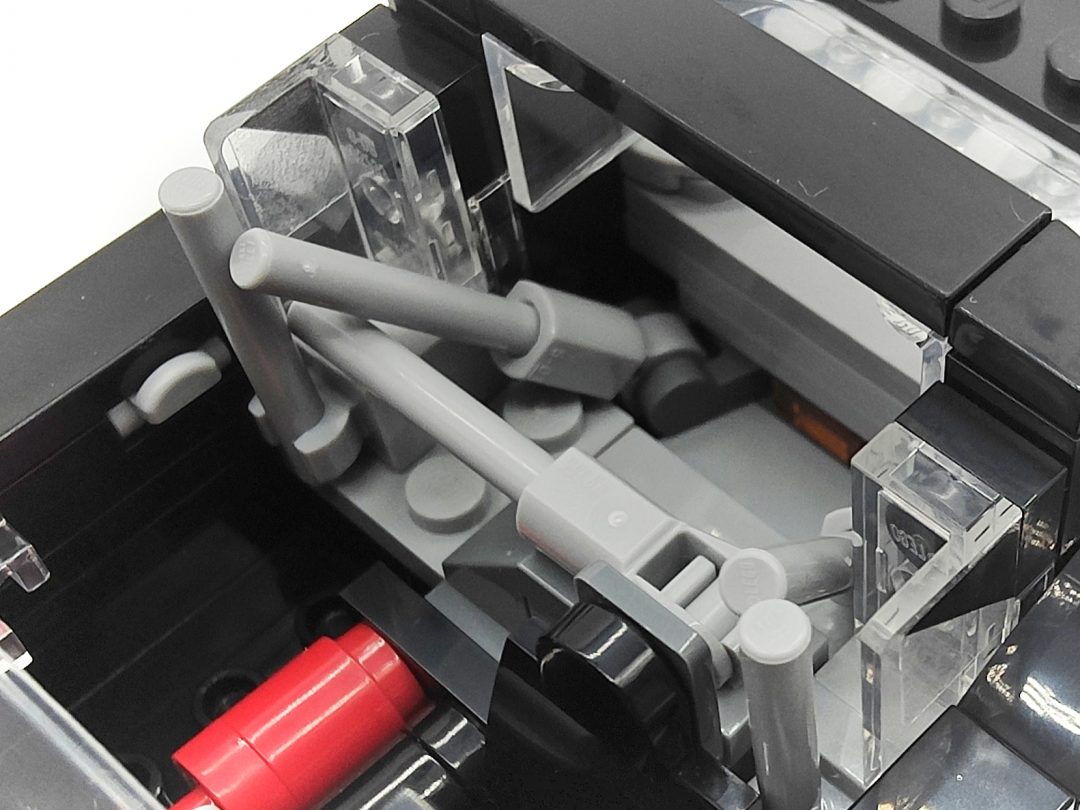 Another cool little nod to the film is the red cannister located next to the drivers seat. This little thing, called NOS, helps the vehicle reach a higher top speed and is used throughout the movies, to great effect. The inclusion of this tiny detail has added to the overall awesomeness of it.

Bag 2 finishes off the build, adding the engine that sticks out the top of the bonnet, the windscreen, roof, and boot cover. Unlike the Aston Martin DB5 set there is only one licence plate, thank goodness, no more unnecessary stickers to apply and Store somewhere.

Each of the four wheel prints are new for this set and look somewhat comical and unrealistic, aost like part of a clown car, or the Resident Evil Umbrella logo, no? Maybe just me then. 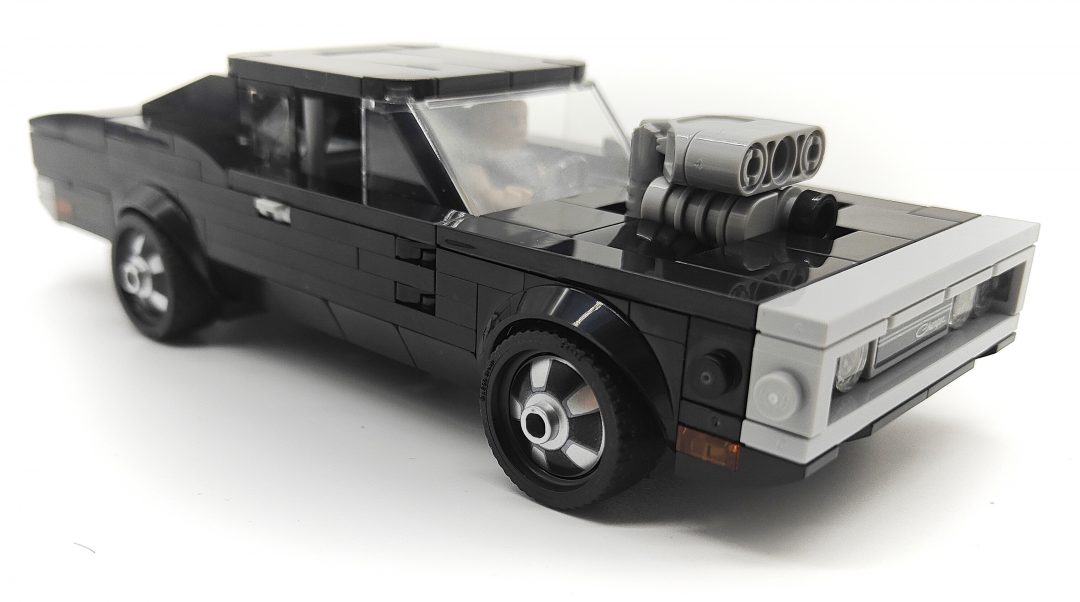 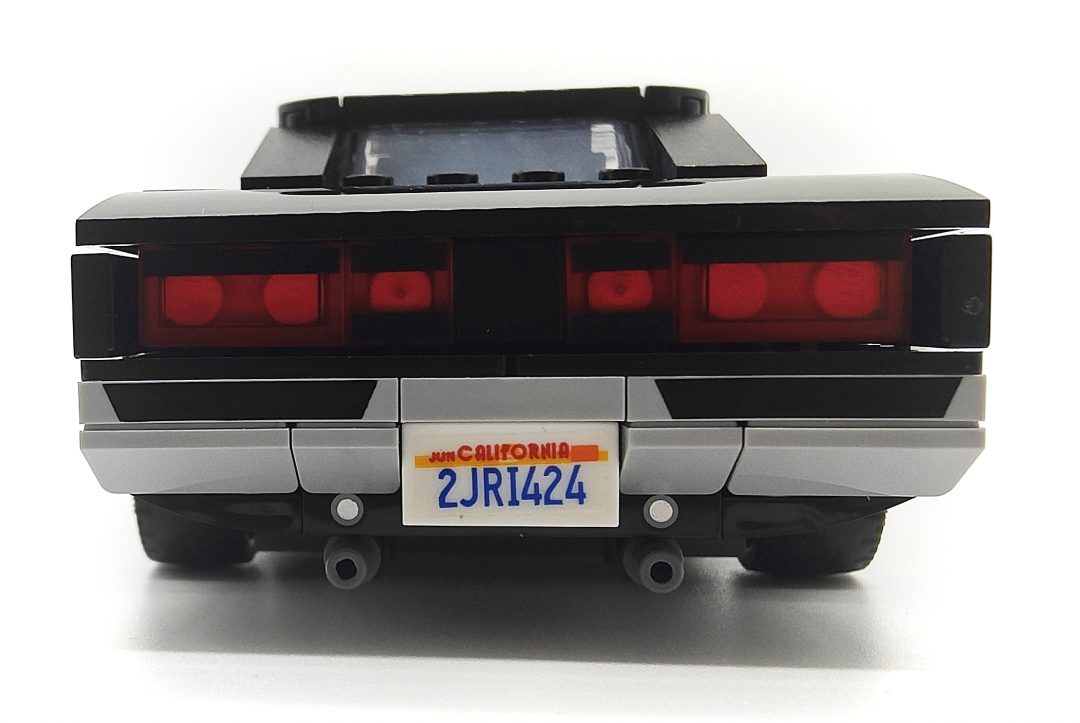 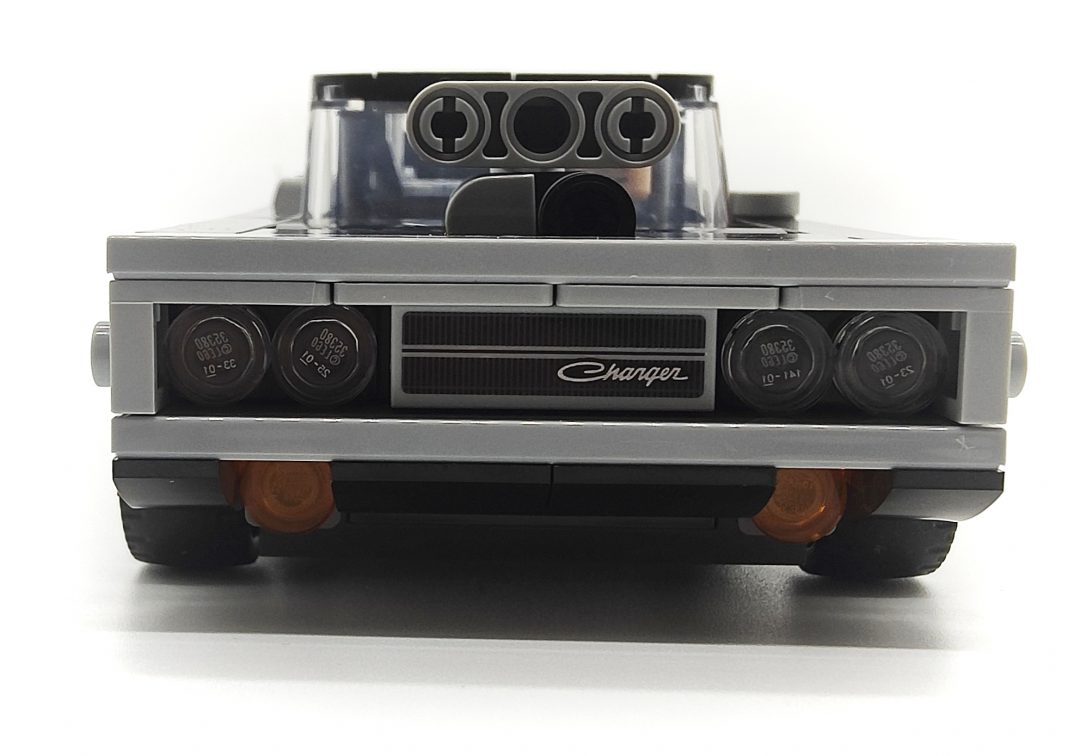 All in all the car is modeled well on its real-life onscreen counterpart and makes for a great addition to the LEGO Speed Champions lineup, even if you aren’t a massive fan of the theme like myself, it looks cool, need I say more?

On to the Minifigure now, which won’t take long as there isn’t more to see. That isn’t me being harsh, the Minifigure itself doesn’t have a lot going on, let me elaborate.

Based on Dominic Toretto, the main character in the Fast & Furious movies, the Minifigure sports a plain black vest and a pair of jeans, and that’s it. The torso features a new design but you wouldn’t necessarily know it as there are only a handful of small creases on the front and back. The legs are plain light grey and because the character/actor is bald there isn’t even a hair piece, making for a very basic Minifigure. Don’t get me wrong, hell definitely go in the collection, but don’t do rushing out to grab this set purely for the Minifigure, I’ll be honest and say it isn’t worth it. The Dodge Charger R/T on the other hand totally is! 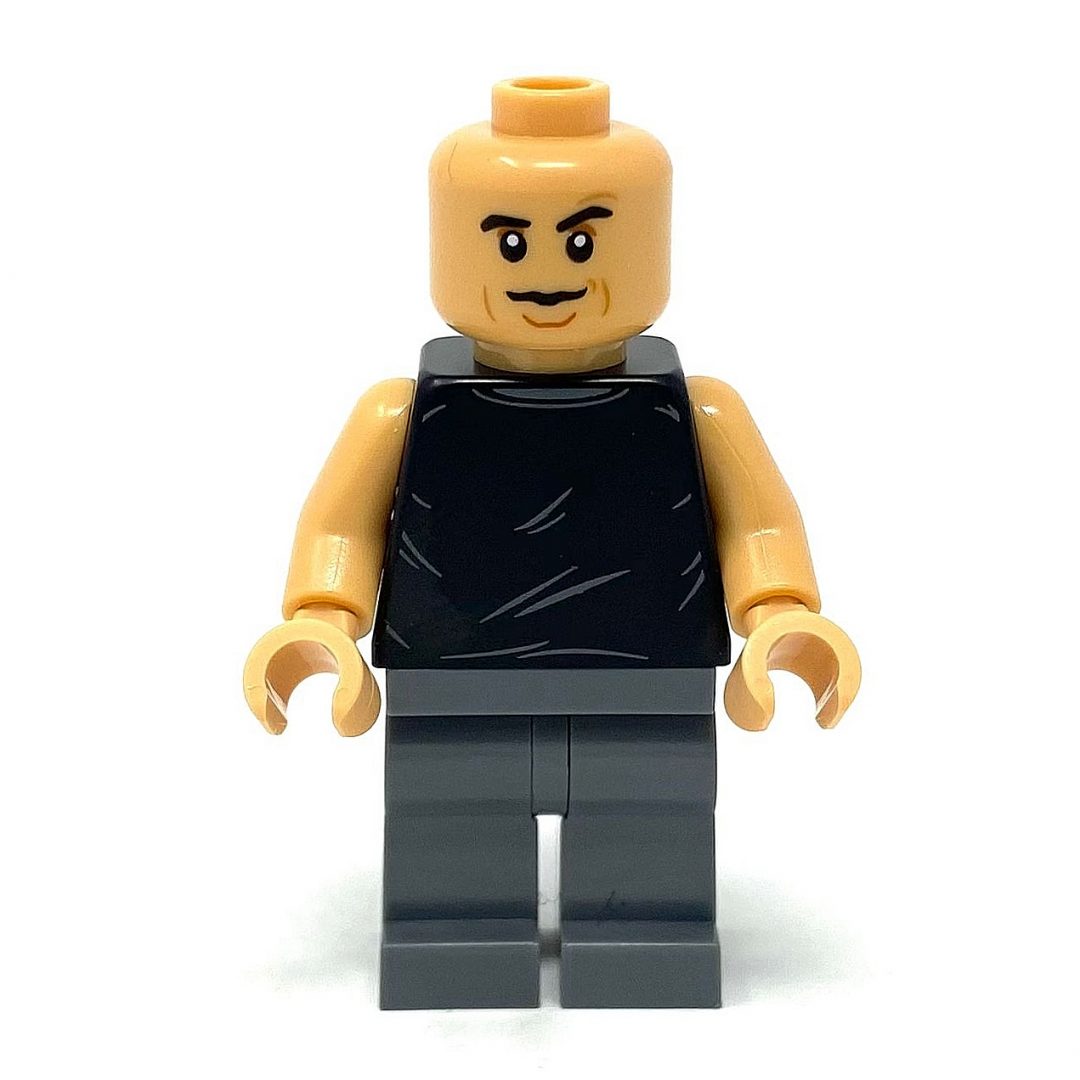 Being a new addition to the Speed Champions theme, this LEGO Dodge Charger R/T (76912) set will be on a lot of fans wishlists and a must get to add to the ever growing collection. I’m not a big fan but this was one vehicle I had to get, it’s such a cool looking car!

The build was enjoyable and seemed to go quickly, which is a good sign as bad builds always drag.

A small sticker sheet is included but containing just 5 it wasn’t so bad. Applying them. Throughout the build was OK and they do at to the overall aesthetic.

The Minifigure is where the set takes a turn for the worst, it’s very basic and doesn’t have much going for it. It is an excel to the set and you won’t find another Dominic Toretto anytime soon, so I guess that adds to the reason to pickup this set. Although personally I wouldn’t base it on that alone, the car is the star of the set!

Thank you for reading this review, I really appreciate your time and support. Please feel free to leave a comment about the review, the set or what you think about it. We love hearing from you!

A big thanks to Mark (@brick_beat) for some of the images used here. 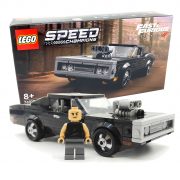