When this set was revealed by LEGO I knew it was going to be a hit with many fans, LEGO and Marvel alike. It makes for an awesome display piece and it’s so strong and well built you can actually swing it around and recreate poses from the movies whilst looking cool doing it!

This review may be a tad on the short side as although it’s a big scale set the 979 piece build contains just 5 numbered bags and a lot of repeated steps. Make sure you read to the end as there are details of a competition exclusive to this review. 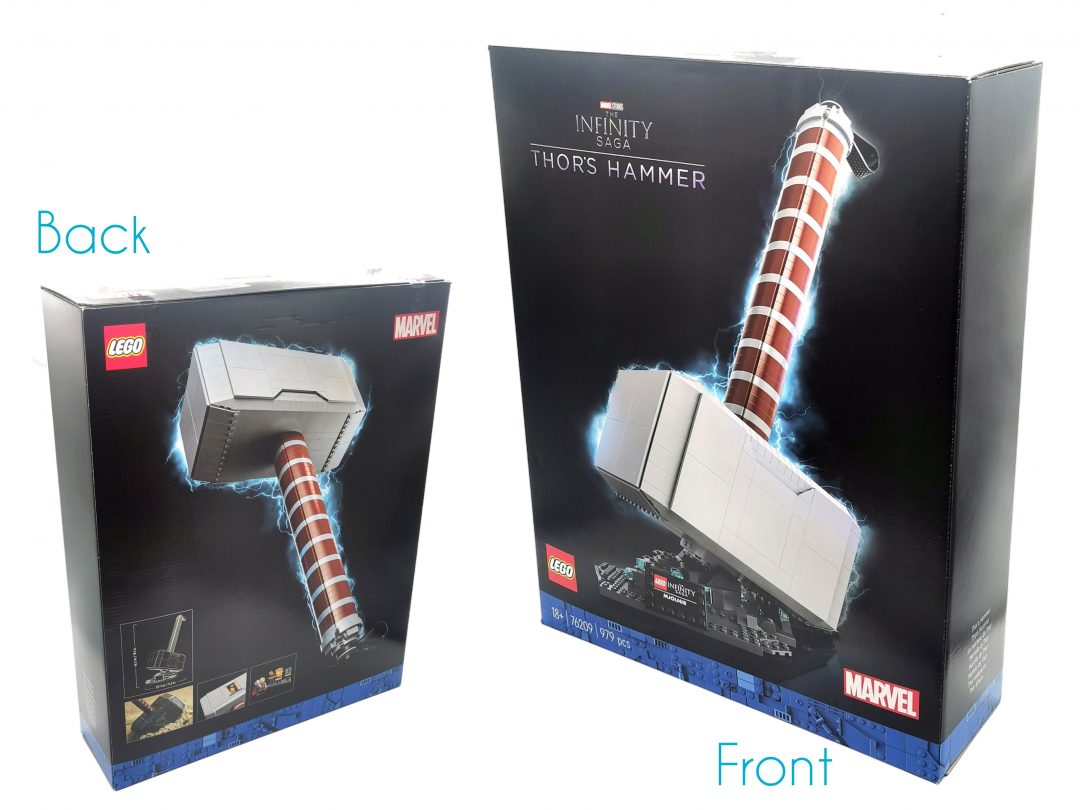 The box has the 18+ Adults Welcome branding on it and I must say it suits the Hammer well, as the plain dark background really let’s this set standout. The addition of the lightning surrounding it is spot on and gives you a sense of the Power that comes with it.

Inside you’ll find just 5 numbered bags which surprised me for a set of this size and price, £104.99. Also inside is an instruction manual, this however is quite thick and looks more in keeping with bigger sets. 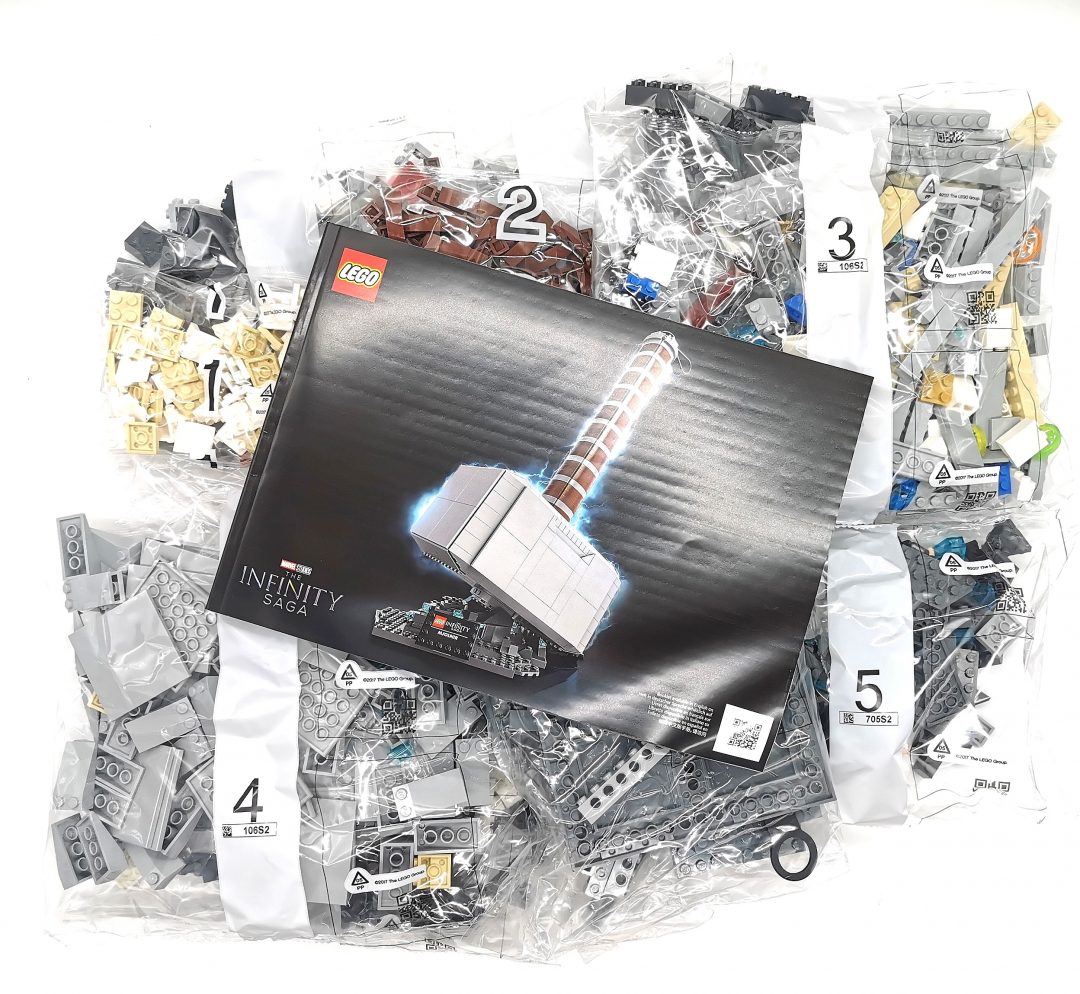 Crack open the first bag and make a start on the handle, building it up as you go and adding long Technic bricks along each side in order to strengthen it.

That was one of the main issues I had when seeing this for the first time, will it be strong enough to hold itself up, with thanks to the many Technic parts and joints I can say that it is rather quite strong. 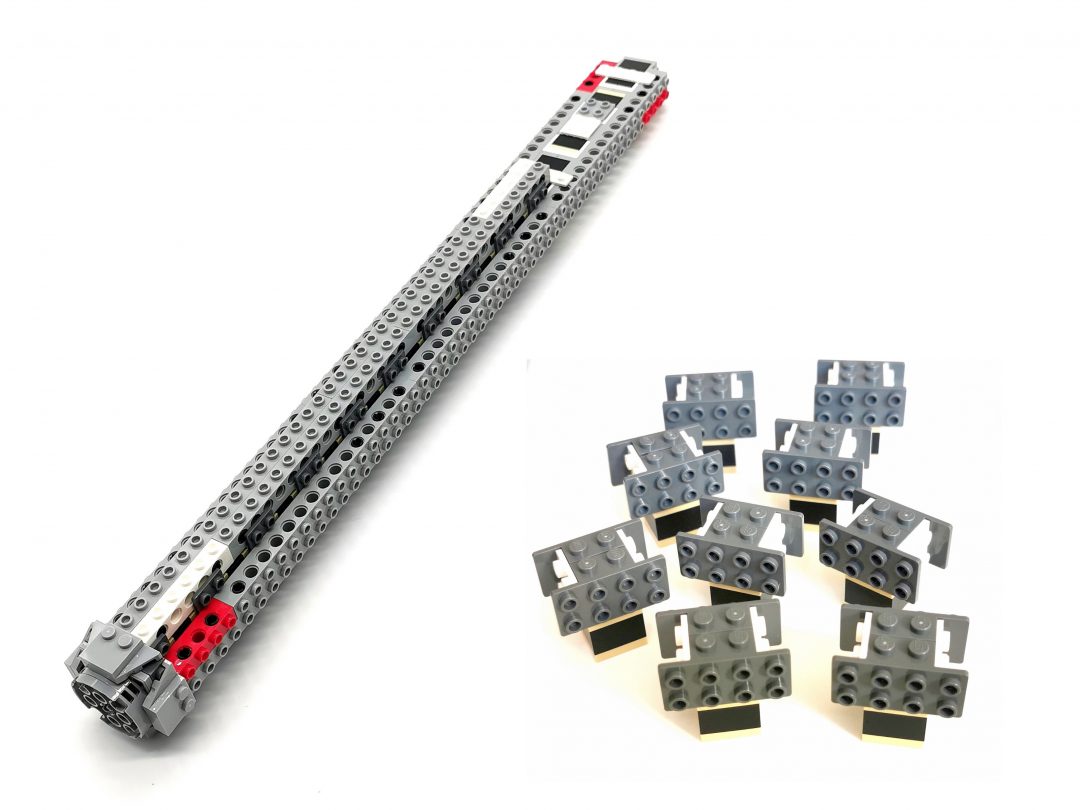 Bag 2 finishes off the handle with the use of countless 1×4 curved tiles, lots of brown and grey are used here but it works and certainly looks the part.

I like the overall effect the handle has and it feels solid in the hand, although there is one issue I need to bring up. If you grip it too tight or in certain places the tiles do start to ease up and sometimes pop off, due to the gaps that run along the 4 corners. Not a major issue I know but it’s worth mentioning as it may annoy some.

Also in bag 2 we make a start on the Hammer itself, laying down the strong foundations, again using a lot of Technic parts and pins. At this stage it looks more like an Axe than a Hammer! 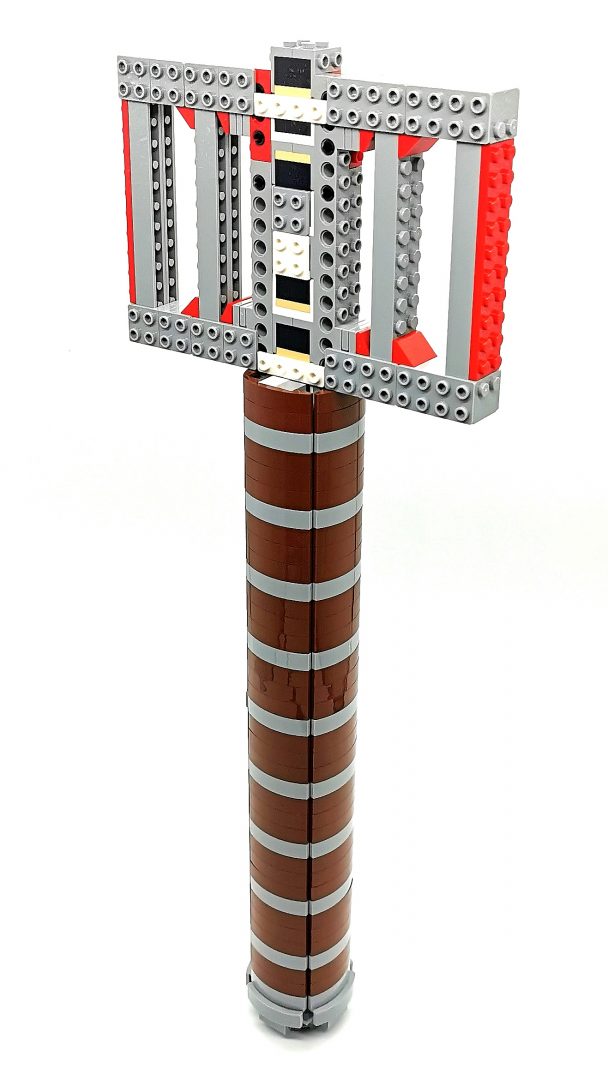 Bag 3 fleshes out the central part of the Hammer head, creating a box and adding reinforcements where it’s needed. Some of the larger tiles are put in place to cover large gaps and securing the connecting panels just that little bit more.

I particularly like the use of the 1×2 plate/slope bricks to create the angled corners and edges of the Hammer.

Some big tiles are used to cover the large gaps left between the supporting Technic bricks. These tiles have always annoyed me as due to their size LEGO struggle to get them smooth like their smaller counterparts, usually leaving a visible mold joint/cut. 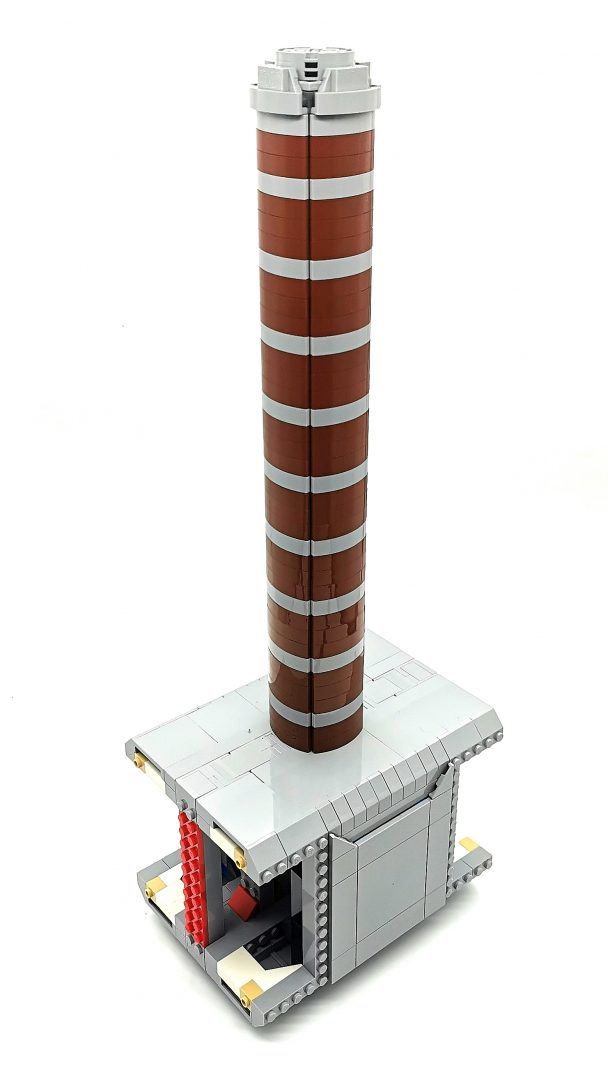 Bag 4 completes the Hammer and boy does it look amazing! The scale of it is 1:1 or there about and feels good in the hand, the weight of it is surprisingly heavy which is a good thing, you can’t be chucking this about, would do some serious damage.

More large 6×6 grey tiles have been used to finish off the end sections along with multiple slope bricks, to add to the overall look of the Hammer and the sharp angles it has.

Adding the finishing touch to the handle is the strap itself, although it does look good as a whole the strap is clearly too small to fit your hand through. This could be a godsend as the short Technic pin that connects it all to the Hammer handle isn’t adequate at all and with the slightest tug comes off.

Another let down is the fact there is now easy way to get inside the Hammer’s head to pop the smaller scale weapons inside, as advertised by LEGO both when they revealed it and on the website product page. There is no indication in the instruction manual that this can even be achieved. I know it wouldn’t take much to lift the required bits off with a brick separator but why should we? There should have either been a clear & easy way to open it or leave the feature off entirely, in my opinion. 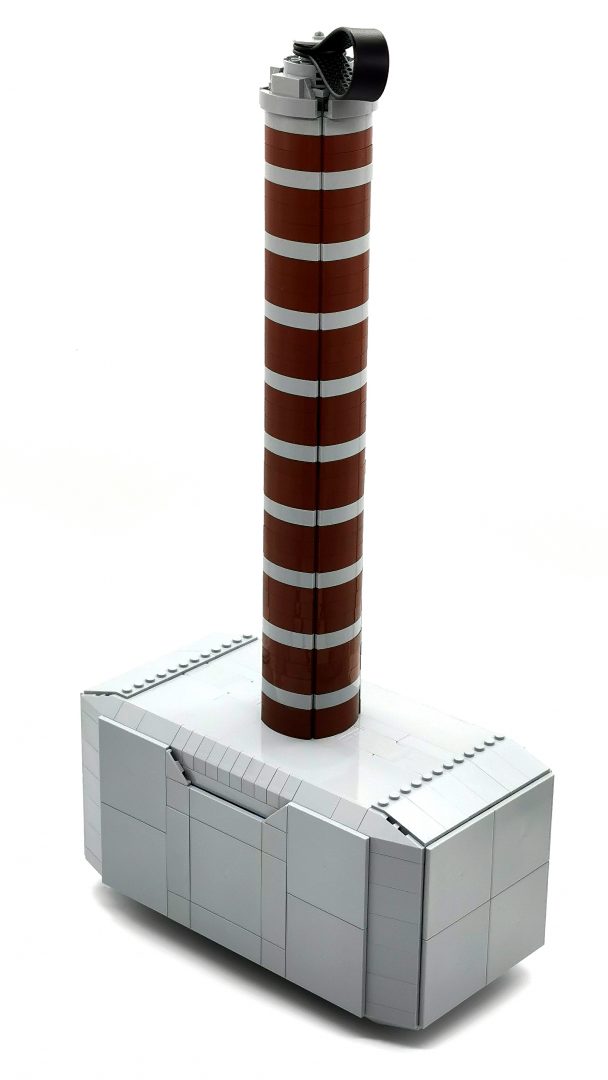 The base it sits on and the Minifigure are all found in the last bag, no.5. It is made up of 3 new road plates, one big and 2 half-size, as well as a handful of slope bricks and transparent blue cheese slopes.

The see-through cheese slopes work incredibly well here and breakup the dull dark grey colour that the Hammer rests on. Its so nice to see a BURP (big ugly rock piece) in a new set, I personally haven’t seen on for a while, perhaps I don’t collect the right sets that have them?

Also included is a printed plaque tile that says Mjölnir on it, the name of the Hammer itself. The quality is spot on as always and looks good on the black background of the tile.

The Hammer rests quite comfortably in place and doesn’t clip into place anywhere, this is fine with me as allows you to quickly pick it up and swing it about without worrying about the base still being attached.

I can’t get over just how cool this set is, even including the multiple repeat steps of the handle, it’s enjoyable from start to finish, and it looks awesome, what more could you ask for?! A Minifigure perhaps… 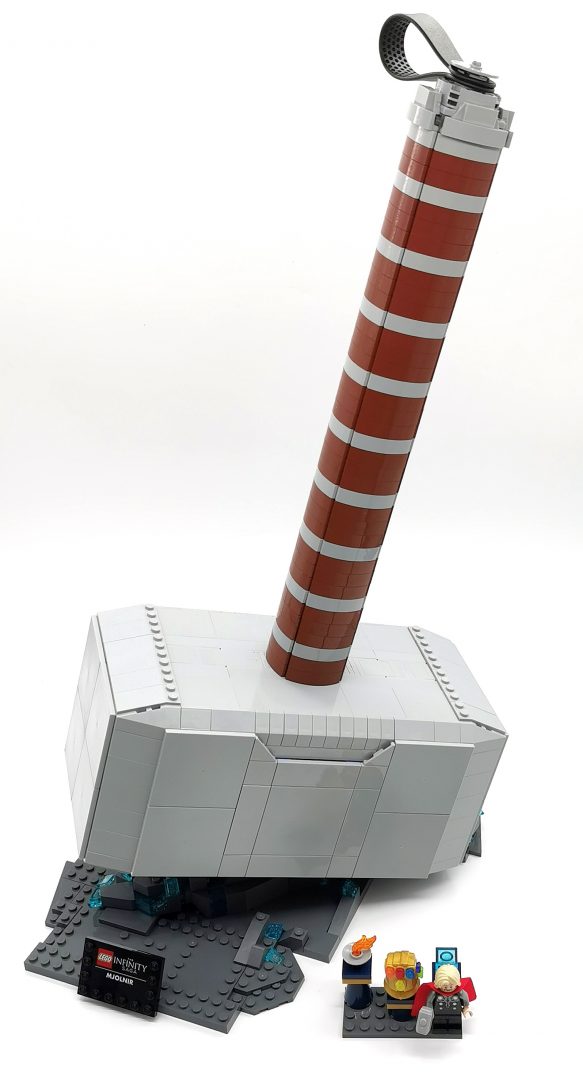 Included in the set is Thor himself, in Minifigure form of course.

The Minifigure is exclusive to this set which is a nice touch as makes the overall value a little more and gets us collectors excited for another rendition of a popular Marvel character.

He comes with his iconic Hammer and Cape and is sporting the MCU outfit with the large circular silver discs on the torso. Sadly there isn’t any printing on the legs or arms which is a let-down for a set of this caliber. 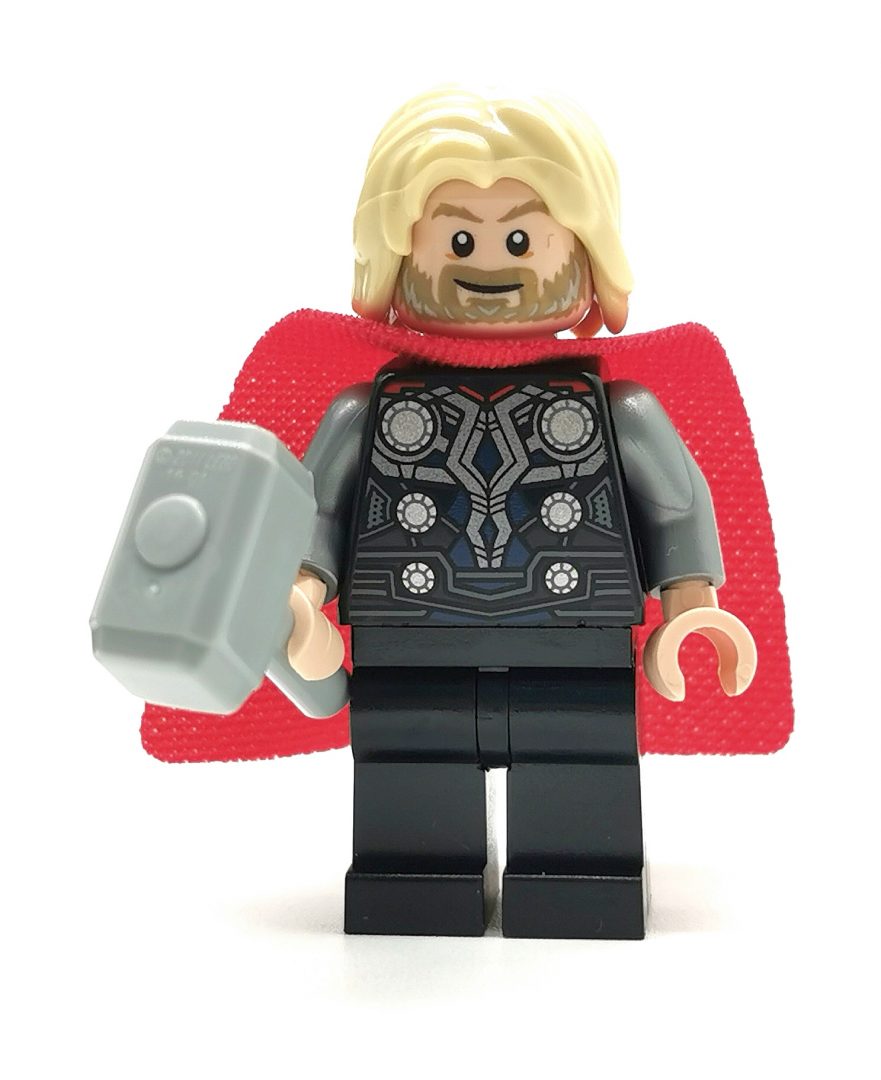 He has an alternative face, which we’ve seen before, that features Thor charging up for a Lightning attack, with the blue streaks and white eyes.

Also included in the set are a number of Minifigure scale weapons, or treasures if you please. These are the Infinity Gauntlet, the Tesseract and Odin’s Fire!

As cool as the Infinity Gauntlet is we’ve seen these start to crop up in more and more sets lately, most recently in the 2021 LEGO Marvel Advent Calendar, so whilst getting this again in full is cool it is definitely starting to lose its charm.

Odin’s Fire is simple coming in at just two pieces, an invert dish and a small fire element. The Tesseract is again a small transparent blue block that we’ve got countless times before.

This is in no way a bad thing though as they all add to the set and make it what it is. If they were to be left out then the cost of the set may have been less and slightly more affordable for fans. Losing these accessories may have brought the cost down to or below £100, evening removing Thor himself would have dropped the price a bit too, perhaps to the £95 mark?! 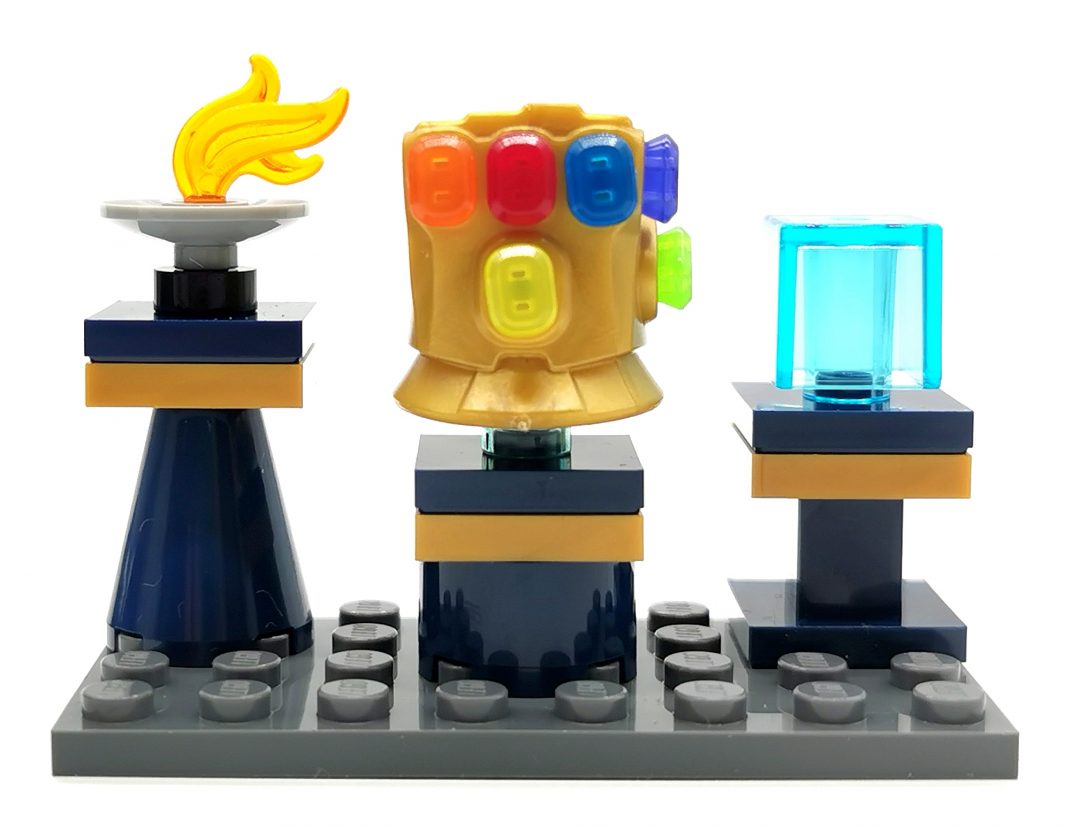 Overall the set is enjoyable from start to finish, including the multiple repeat steps of the handle.

It captures the essence of Thor and Mjölnir and is a joy to behold. Picking it up for the first time, if you’re of course worthy, feels awesome and makes you want to swing it around and pretend you’re Thor.

The handle has a little issue, which I mentioned above, where the curved tiles do start to lift up if gripped too hard, but it’s not that big of a deal and one that I can look past.

The Thor Minifigure is exclusive to the set and is a welcomed addition to the set, he will go into my LEGO Marvel Minifigure display for sure. The design and printing is spot on and looks the part.

Including a small side build wasn’t really necessary and something we could have done without, but the Minifigure scale weapons/treasure does look good. Not taking many parts to build I again can look past this and appreciate what LEGO were trying to do.

We would highly recommend LEGO Thor’s Hammer (76209) to any Marvel fan as it is a must have collectors item and looks awesome on display. You’ll have hours of fun building it and a lift time to enjoy it! 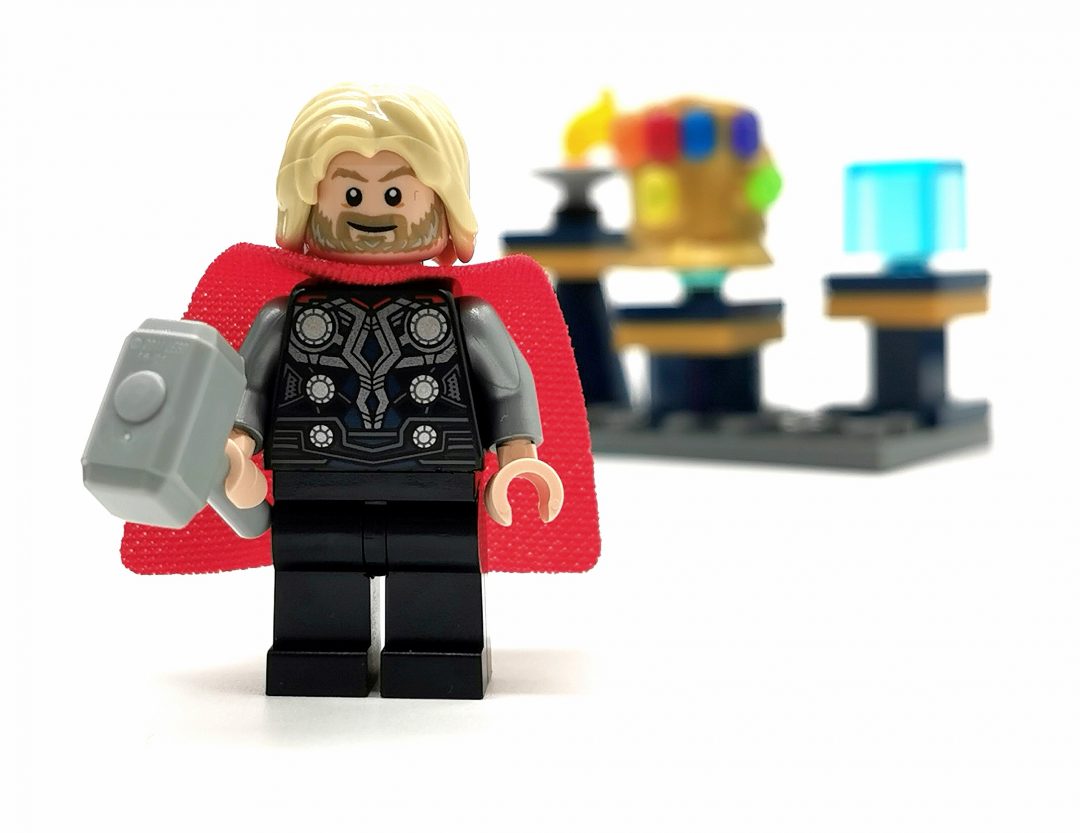 Thank you for reading this review, we really appreciate your time and support. If you’d like to contribute your own reviews please get in touch here, we’re always looking for content writers.

As mentioned at the start of the review we have a small set to giveaway, simply leave a comment on this page below telling us which Marvel Superhero is your favourite, there is no right or wrong answer and is purely for fun! 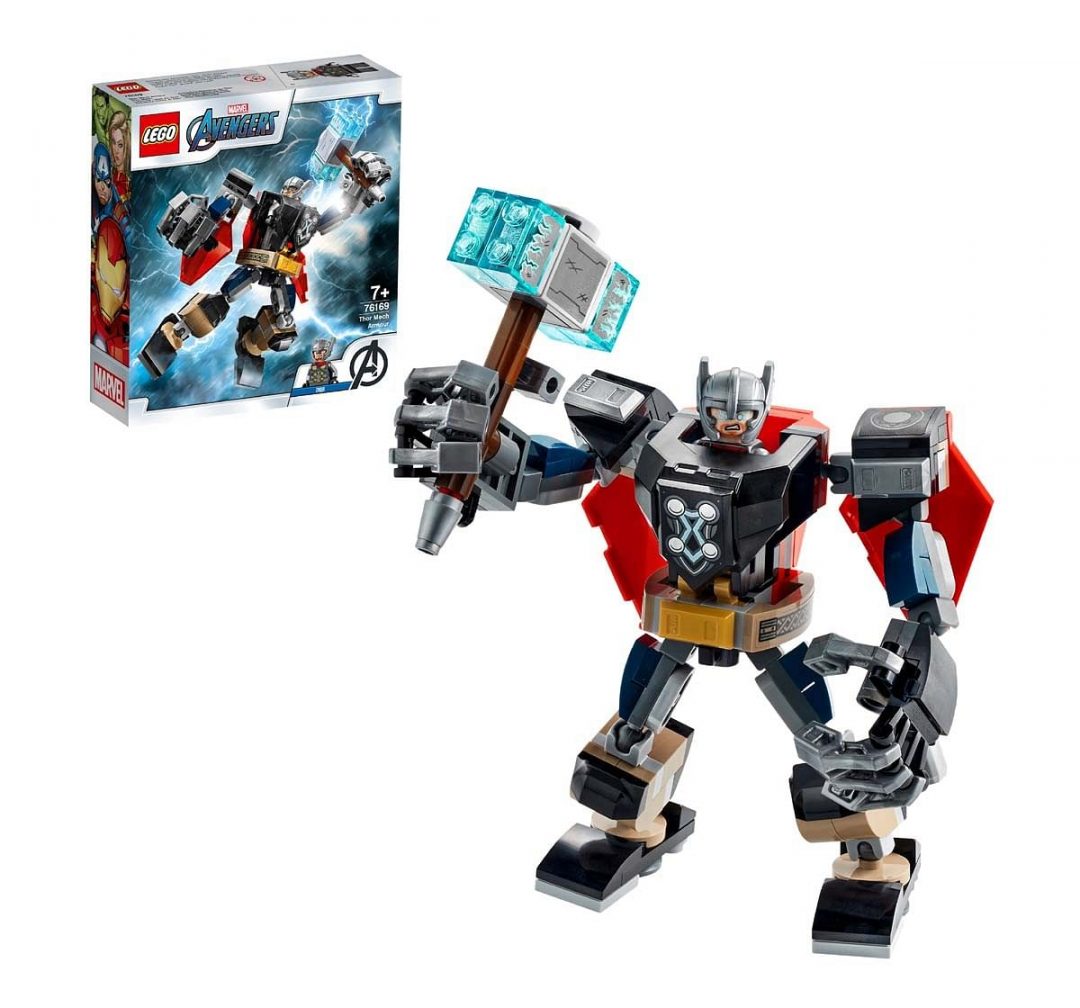 It’s open to most regions Worldwide and if shipping it available then a gift card of the same value will be supplied instead. Please see our Competition terms here.

Competition closes 1st May 2022, when a winner will be picked and notified. Good luck!

*not endorsed by LEGO in any way* 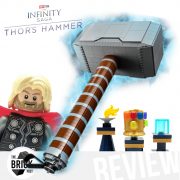 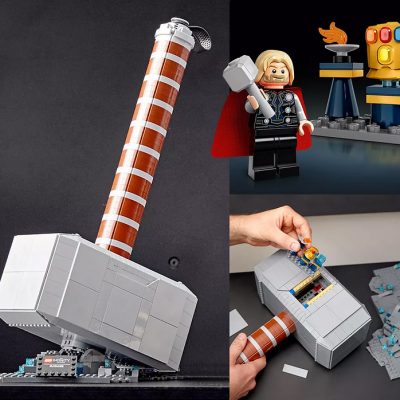