With the new Disney+ TV show The Book Of Boba Fett finally available to watch I thought it was the perfect time to build a related set, LEGO Star Wars Boba Fett’s Starship (75312)!

When this set was first revealed I was very sceptical about it as the size was very questionable, being a tad on the small side, but I must say the whole build experience and overall ‘swoosh-ability‘ is fantastic and one I’m glad I didn’t pass on entirely.

Here is our review of a somewhat underrated set, that packs a big punch for its size and cost. 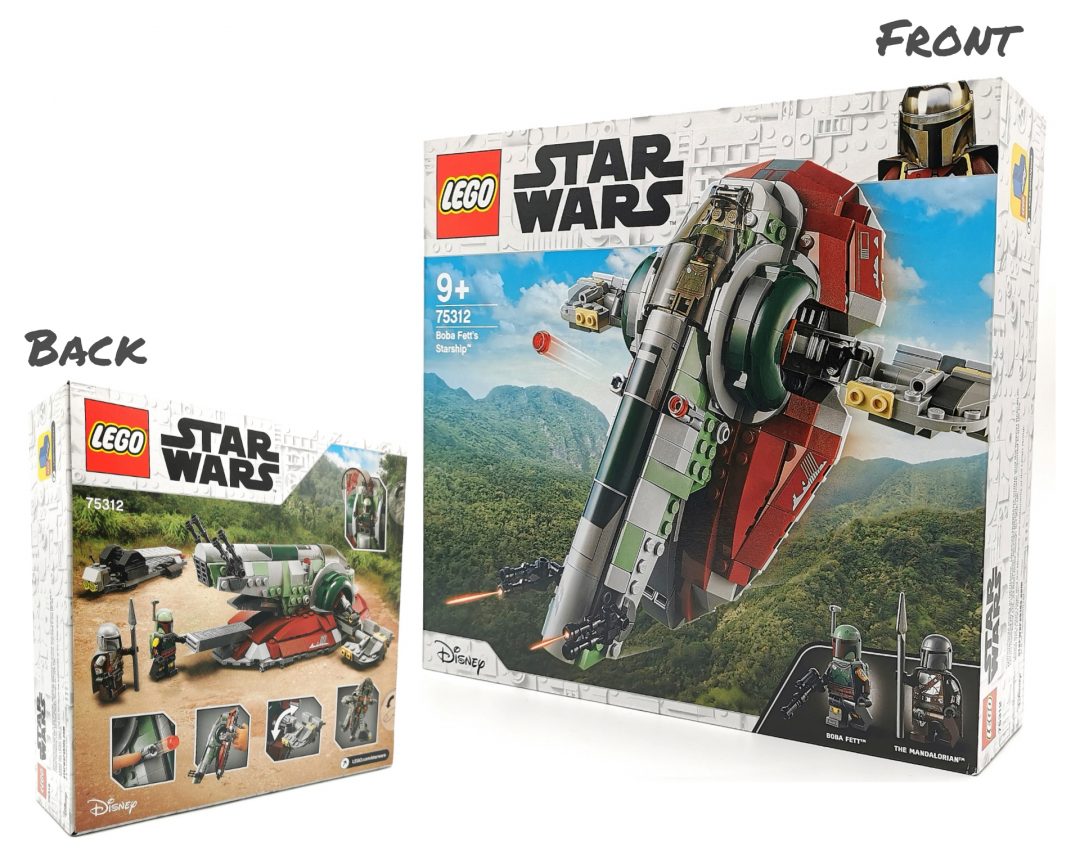 As with most of the newer sets the box art is on point and often features gorgeous graphics. On this particular box the background depicts a lush and very green mountain range, most likely on a specific Star Wars Planet that I don’t know the name of, sorry.

Flip the box over and you’ll seeaybe of the details and playable aspects of the starship, including the ‘swoosh‘ handle. Let’s be honest we’ve all grabbed a set at least once in our LEGO lives and flown it around the room, even recreating the sound effects to go along with it. I know I have! 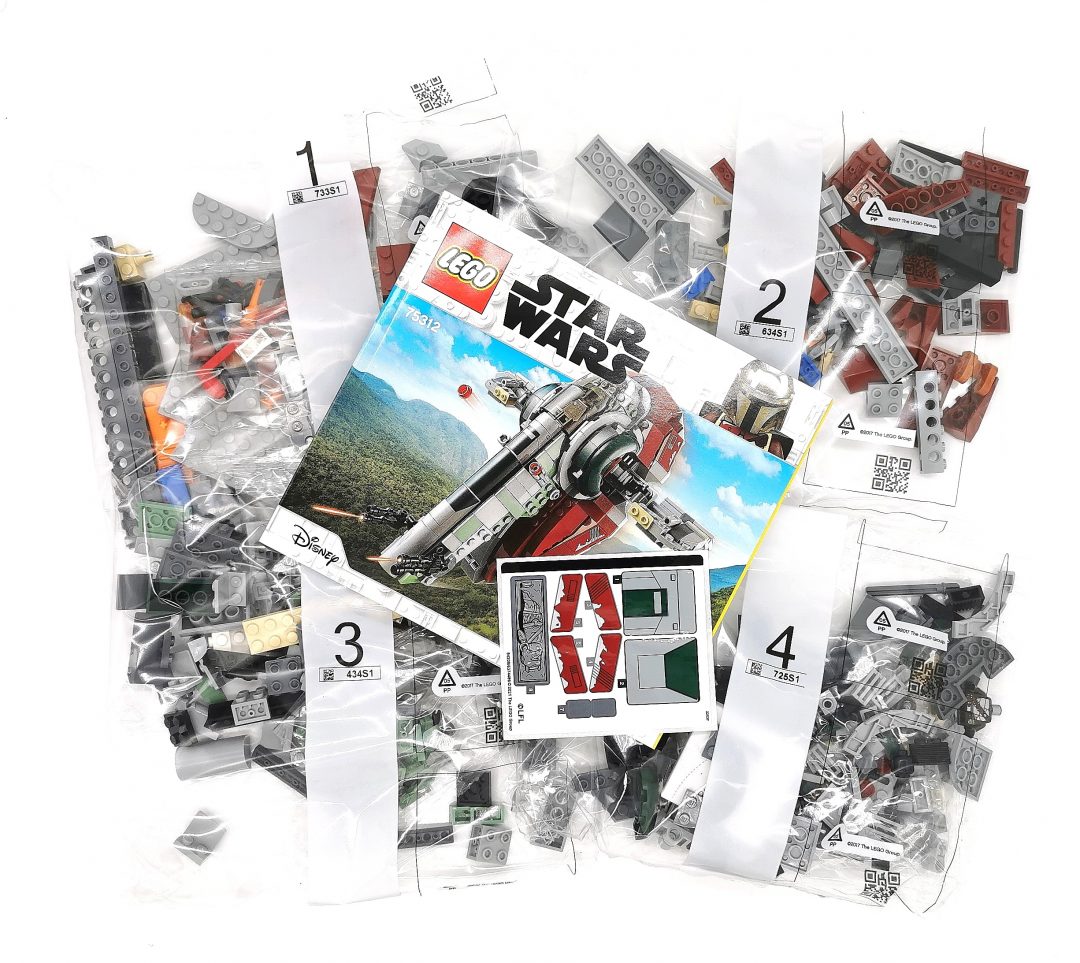 Crack it open and sldie out the contents and you’ll find four numbered bags, a small sticker sheet, and the instruction manual.

Sitting down to watch the first episode of The Book Of Boba Fett and building his iconic Starship seemed like the perfect thing to do, gradually constructing the set and Minifigures whilst watching one of the Years most anticipated TV shows! 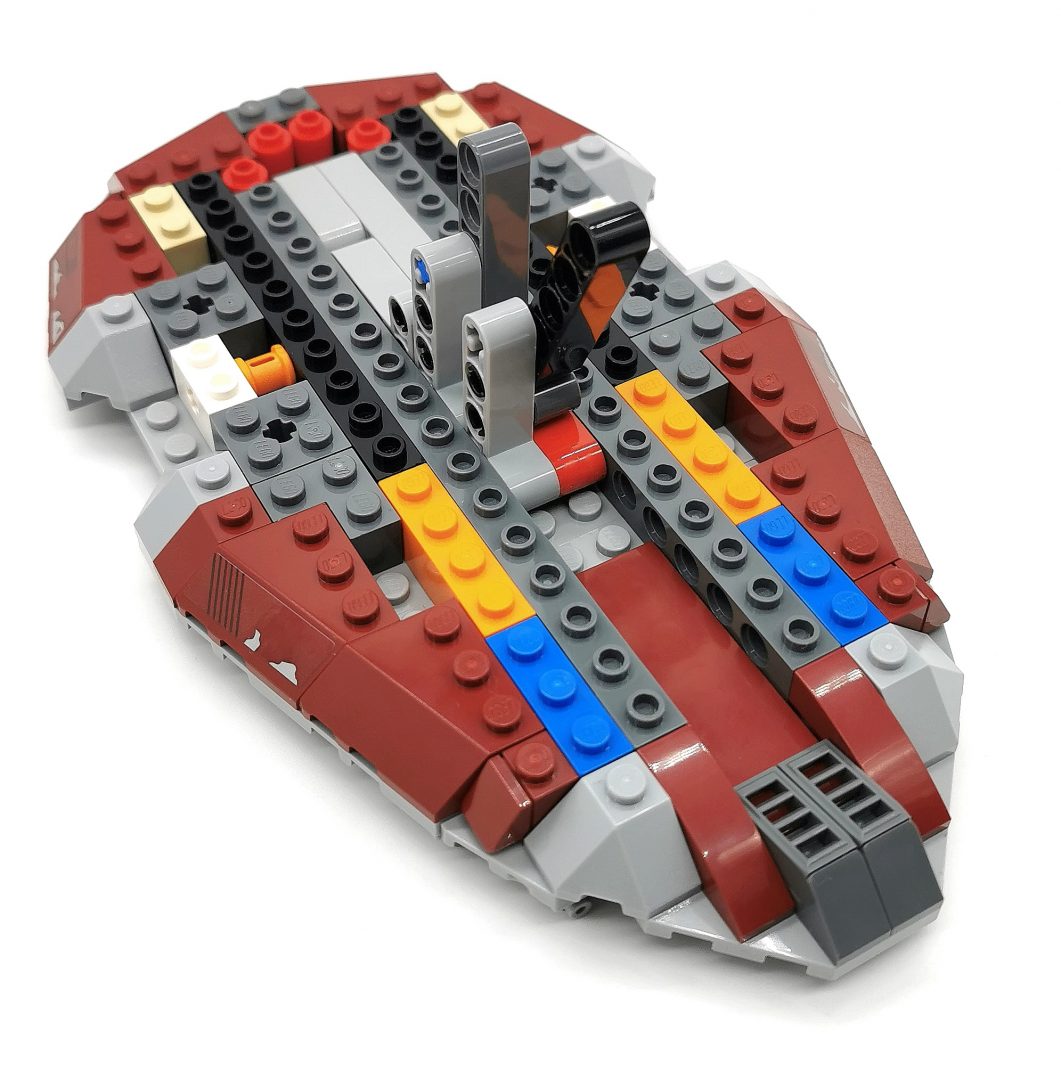 Bag one starts you off building the base of the Starship and adding the necessary support structure which will later hold up the front of the vehicle.

There are a lot of sloped pieces here that gives the whole build a more rounded and polished look. A couple of the stickers are applied on opposite sides, these shows slight battle damage to the Starship that I personally like. 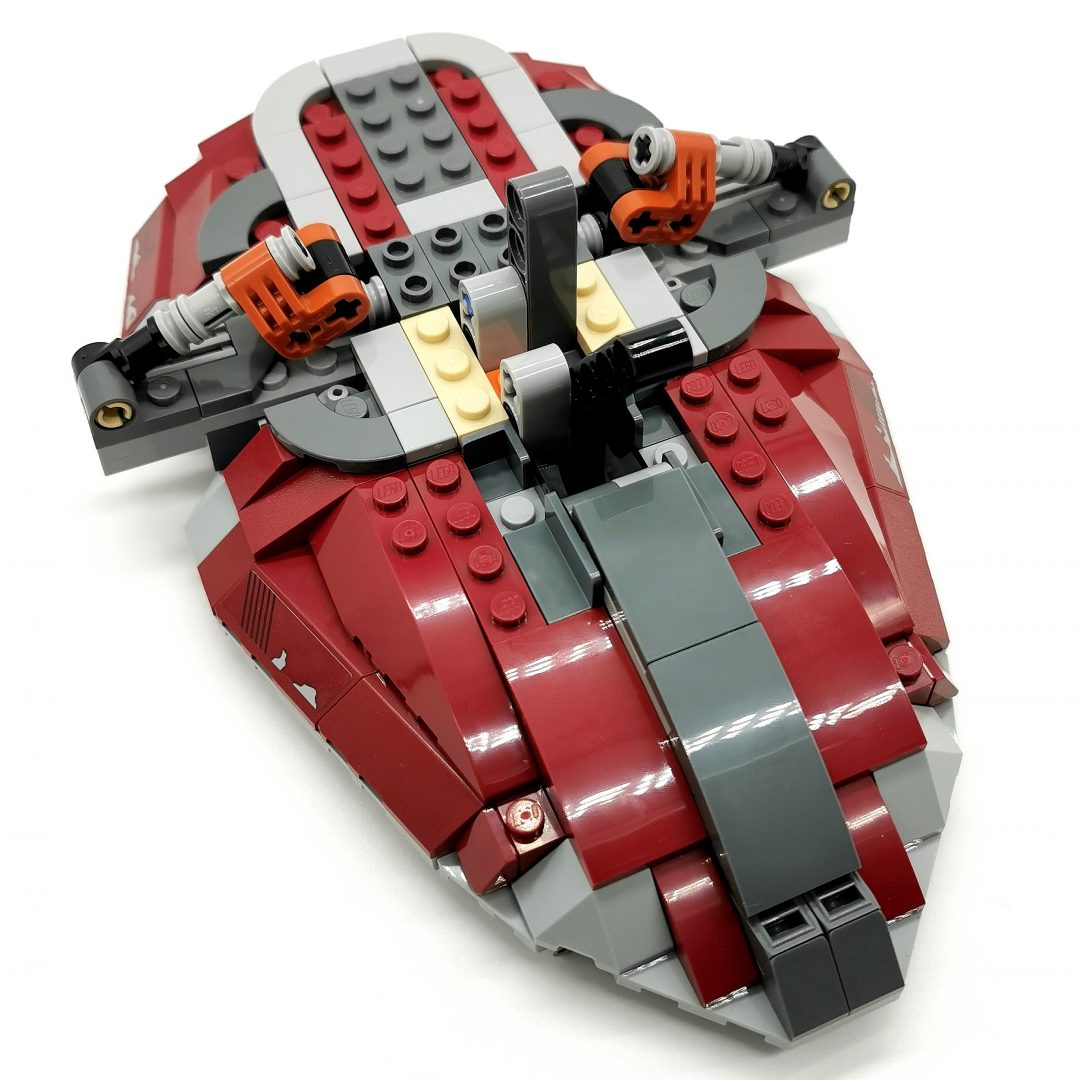 I don’t mind using a handful of LEGO Technic pieces in a LEGO Build if it’s there to add support to the main structure, but personally speaking I don’t do LEGO Technic sets in general. 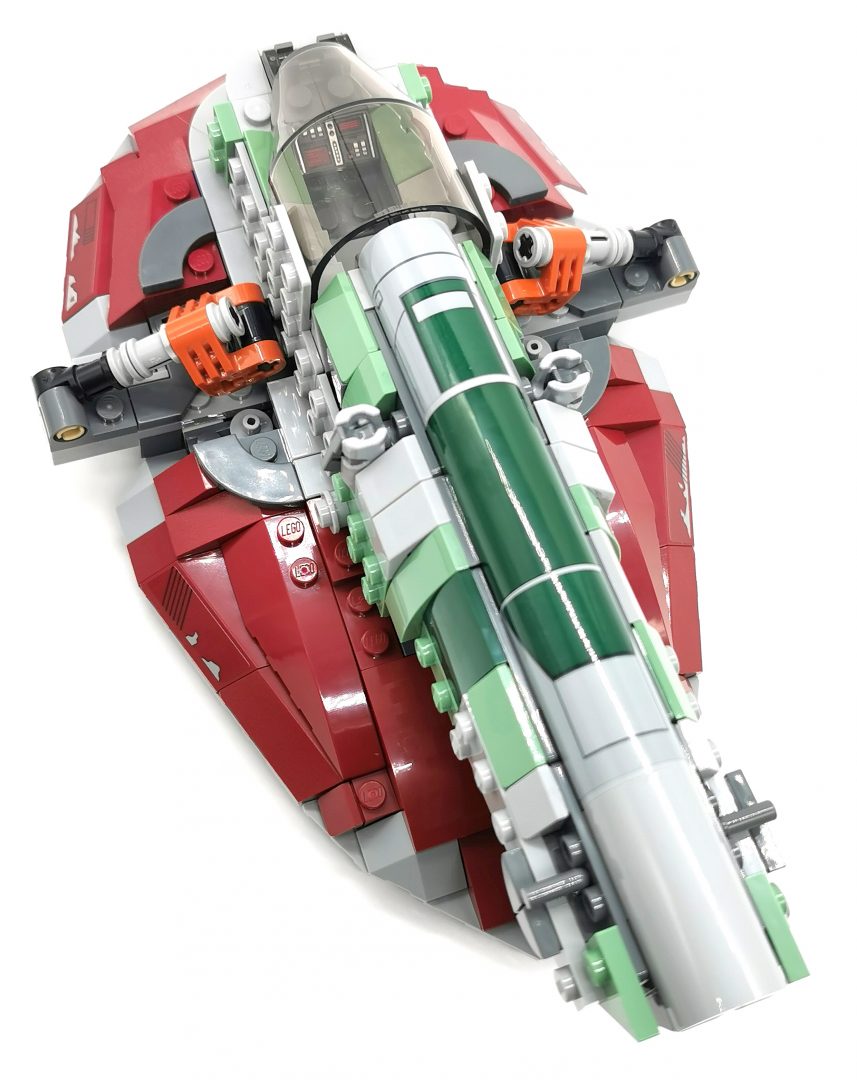 Bag three adds details and more stickers to the ‘nose’ of the Starship, with a lot of SNOT (studs not on top) techniques the build  definitely resembles the iconic ship.

Stickers are always a pain and printed parts should always be included if it calls for it. There are some cases in this stage that most certainly do, such as the 1×4 curve top bricks. Don’t get me wrong the application is surprisingly easy as the curve stays parallel but would have preferred printed parts here that but-up against the adjoining piece and ultimately not be as gappy. 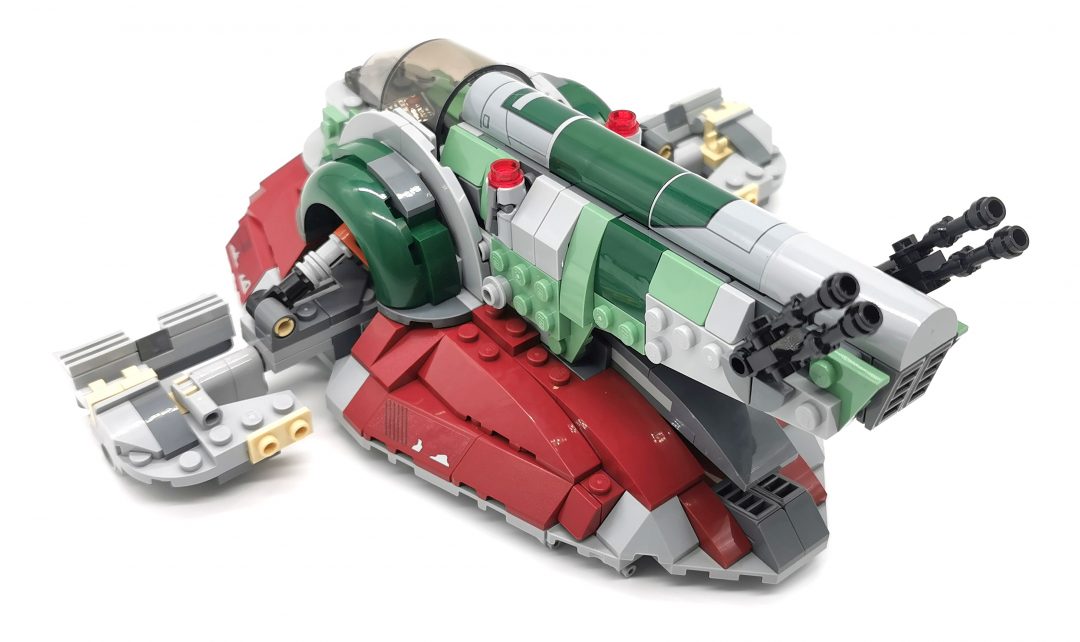 Bag four, the final stage, obviously finishes the build off and wow what a little beauty!

As I mentioned at the start of the review the size of this set does initially look small, but having built and see it for what it’s worth the size is quite respectable. It won’t hold up against its older and larger ancestor sets or even the LEGO Razor Crest, but it does look cool and most importantly it’s still very much ‘swooshable‘! 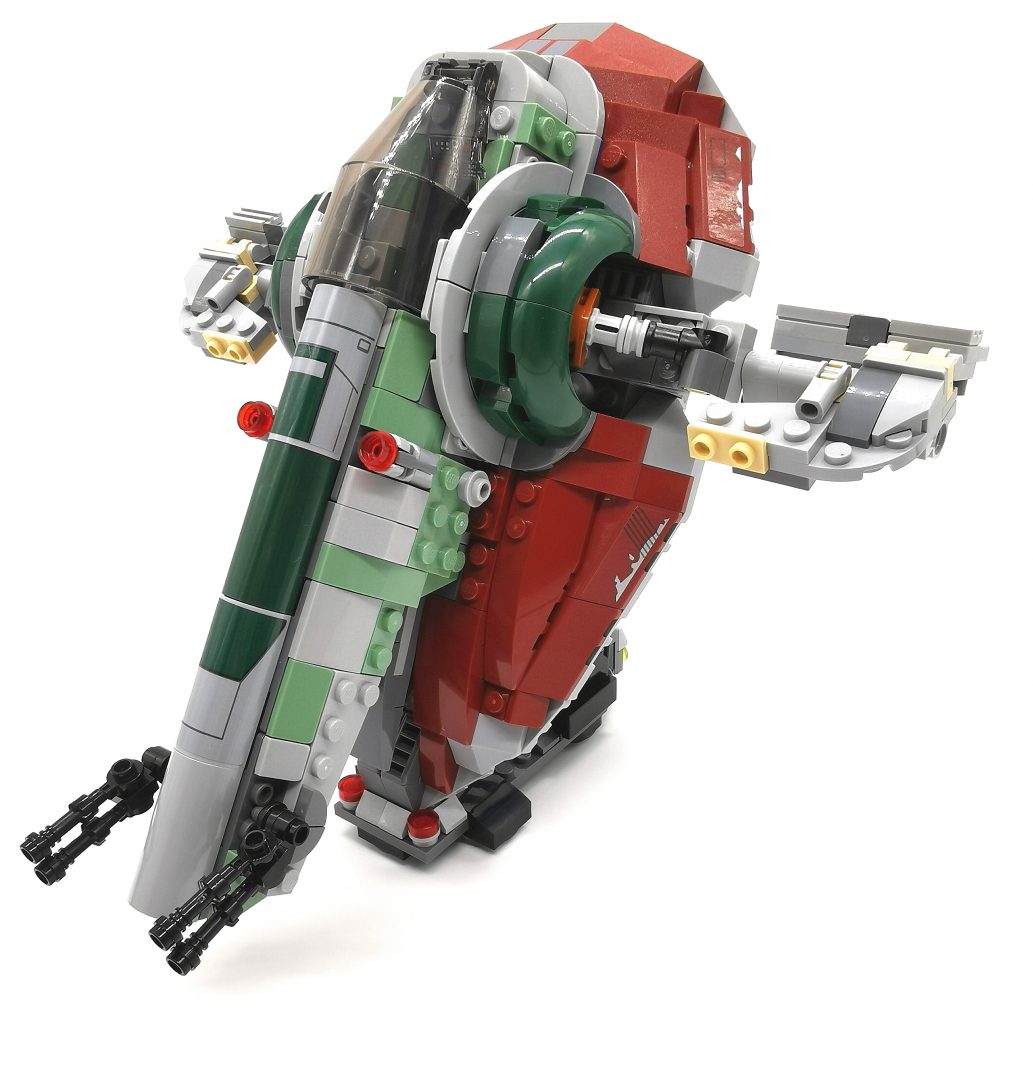 Finishing off the ‘wings’ and the details to the ‘nose’ of the ship are the main points of the final bag, along with a handful of arched pieces and gun turrets. The ‘wings’ themselves are great and represent their on screen counterparts well, but the construction could have been a little more solid as they swivel far too easily. I personally would prefer them to be a tad more rigid so then playing with this in the intended way I’d be in control of the ‘wings’ direction, not gravity. 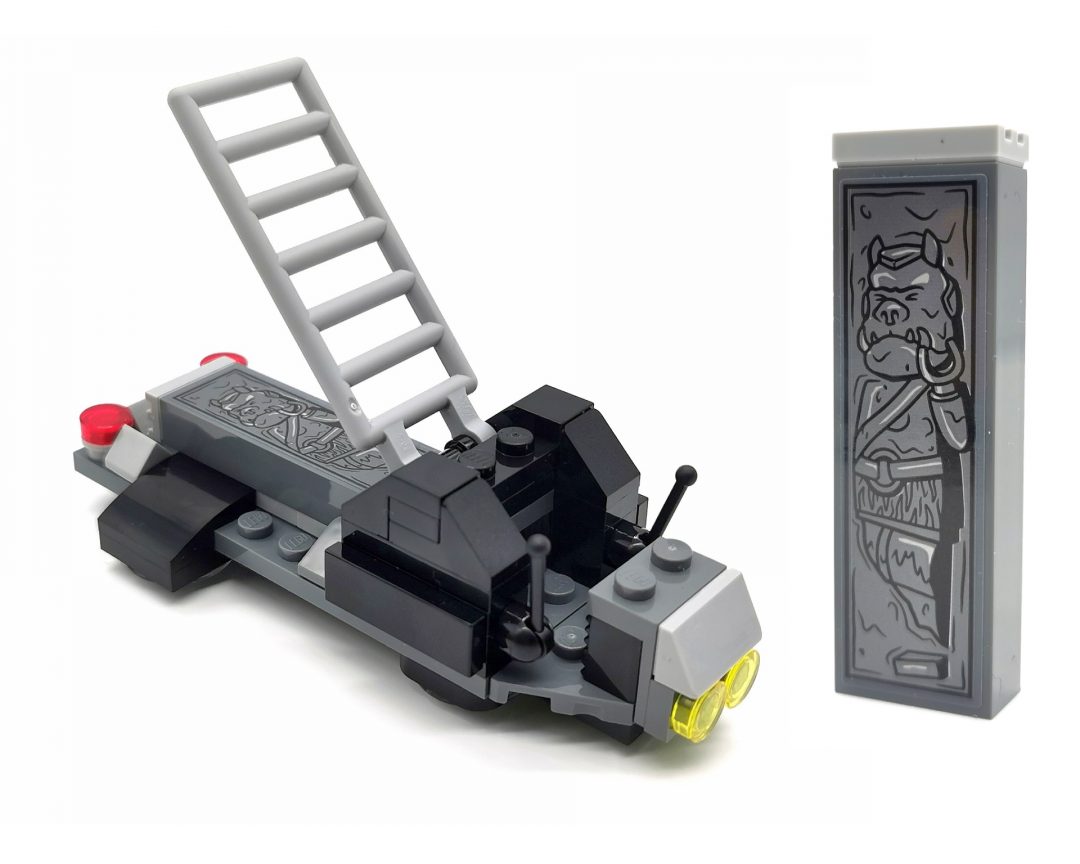 There is a small side build in this bag and that is the Carbonite transport vehicle, which also doubles up as a display stand for the ship. This is an extremely nice touch by LEGO and one I think they should implement more often.

Simply flip up the ladder piece, pop the Starship in the correct position and hey-presto a very cool display set. The underneath of the ship also has a few details attached such as the thrusters. 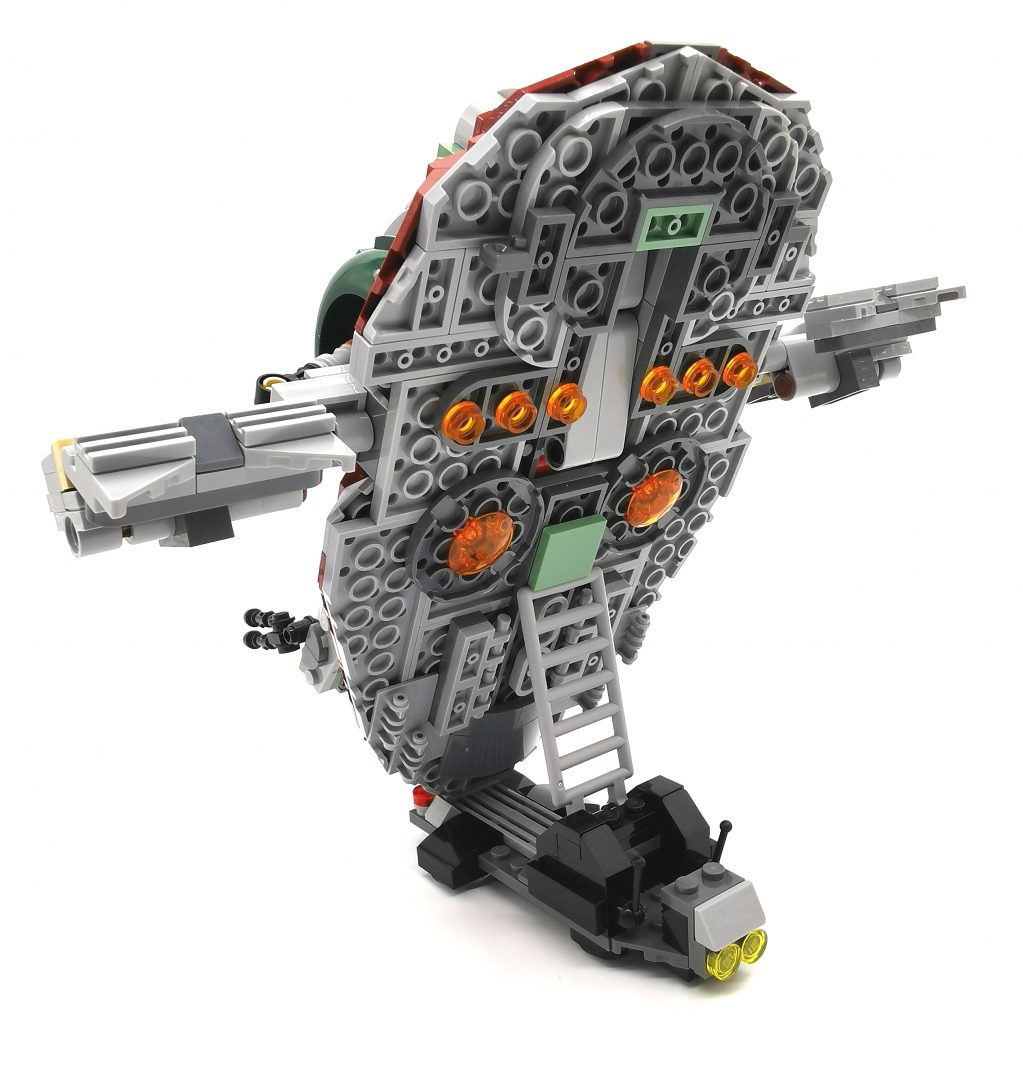 Overall the Starship does look incredible for its size and price point (£44.99). There are a ton of details and some very interesting pieces and build techniques along the way.

Included in the set are two of the Galaxies toughest Bounty Hunters, Boba Fett and Din Djarin (The Mandalorian), and they come decked out in all their gear including guns, capes, and Helmets! 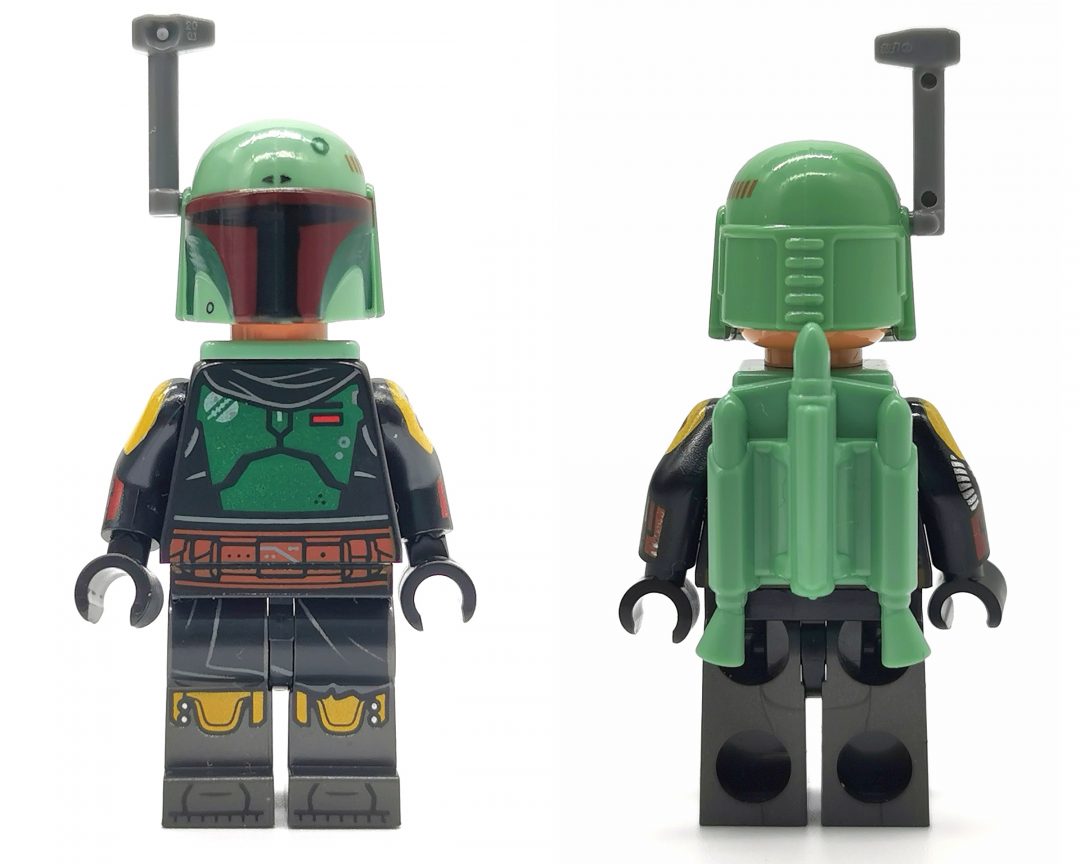 Boba Fett is the man of the hour currently and rightly so, he has been away from our screens for far too long, after making a comeback last year in the hit Disney+ TV show The Mandalorian, he now has his own show, and with it a fresh suit of armour.

The design and print of the helmet, torso, legs, and arms, yes that’s right the arms come fully loaded with incredible art. It’s not just limited to Boba Fett, Din Djarin also have arm printing, although it’s not new for The Mandalorian to be sporting arm prints. 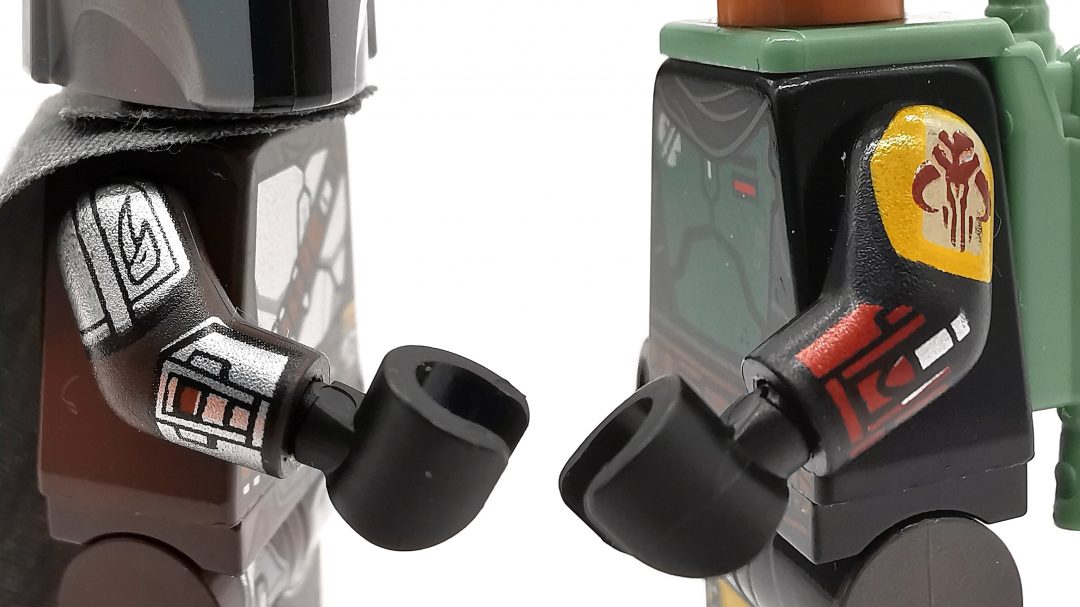 Both have a similar style of armour design as they’re both Mandalorians, Din Djarin has Beskar armour while Boba Fett has his usual dark green armour.

Din Djarin is the exact same Minifigure found in previous sets so sadly he isn’t exclusive, but Boba Fett on the other hand is, and I just say it’s so nice to get such a cool looking Minifigure in a set of this price, the exclusivity is definitely an added bonus and will attract a lot of collectors for sure! 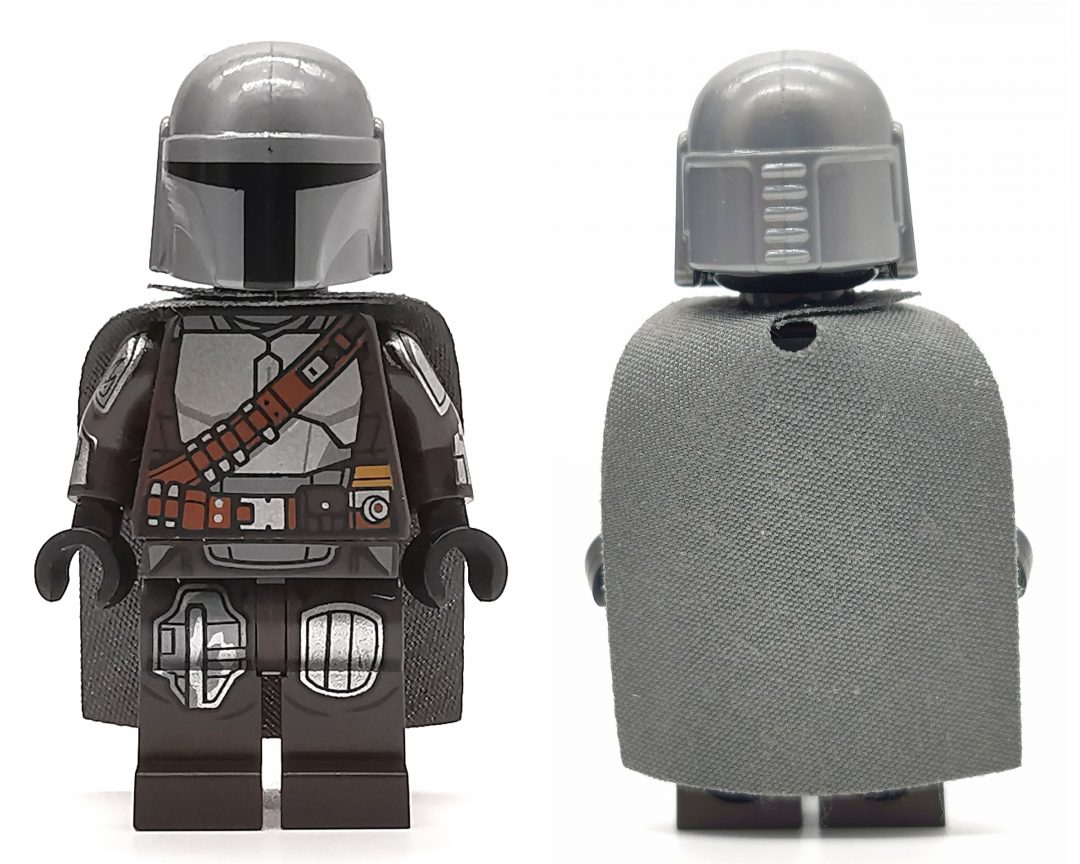 Looking at the set as a whole we’d say it’s a no brainer to get, build and display in your collection. From the Starship itself, the Minifigures, and the added extra of a display stand makes this LEGO set quite desirable.

Both Minifigures are great although the real pull is Boba Fett, as not only is he such an awesome character the Minifigure is exclusive and one worth adding to your lineup.

We highly recommend LEGO Star Wars Boba Fett’s Starship (75312) for not only Star Wars fans but for Minifigure collectors too!

Thank you for reading our review, we hope you enjoyed it and found it to be usuful. Please let us know what you think of the set and/or the review via the comments below. 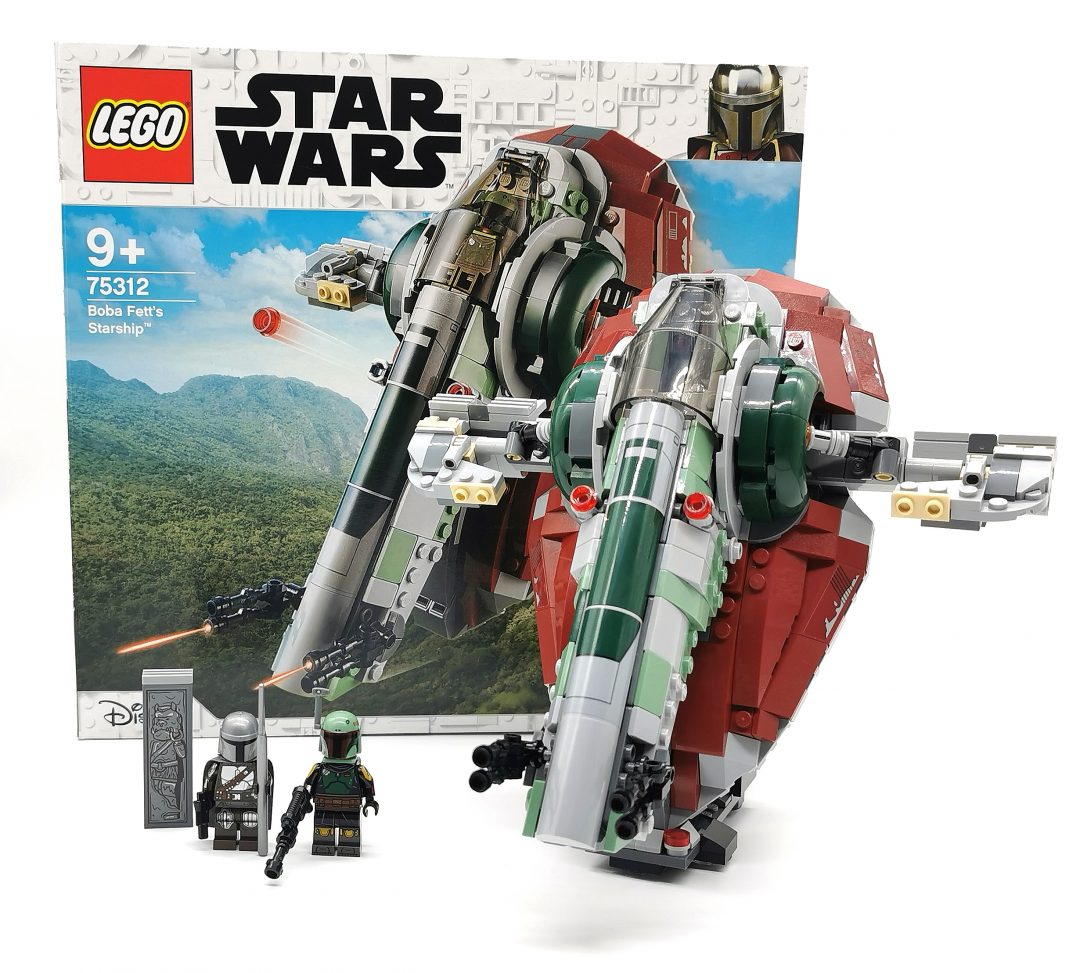 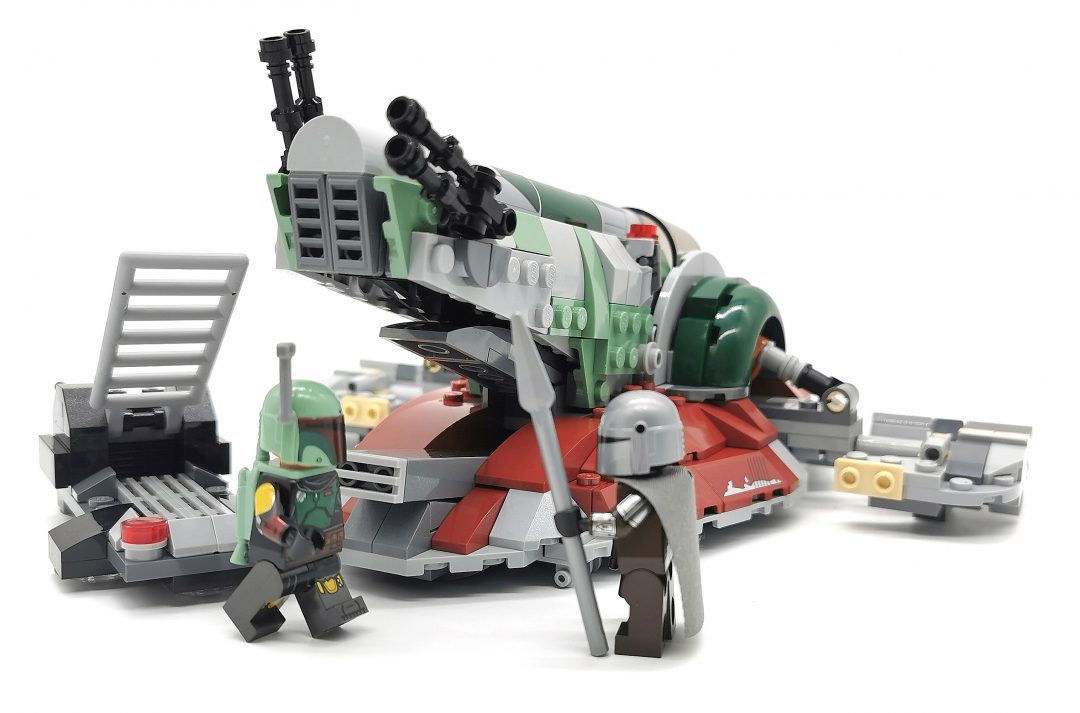 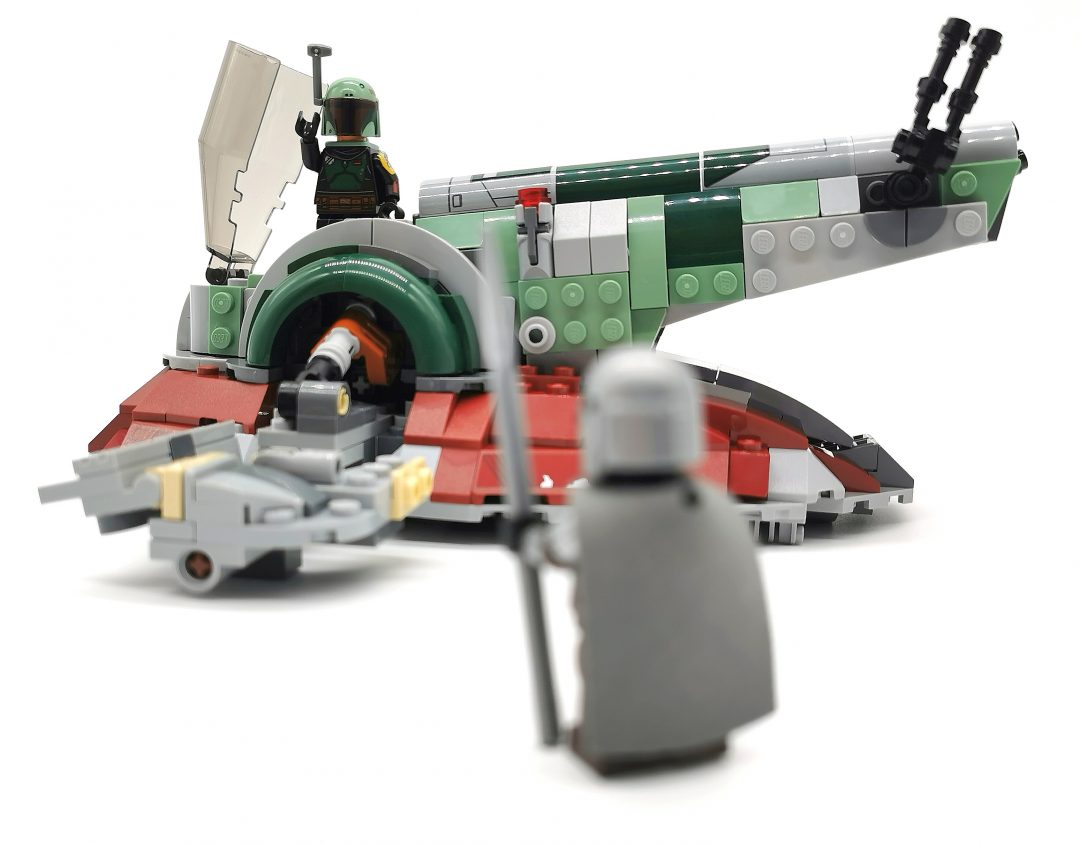 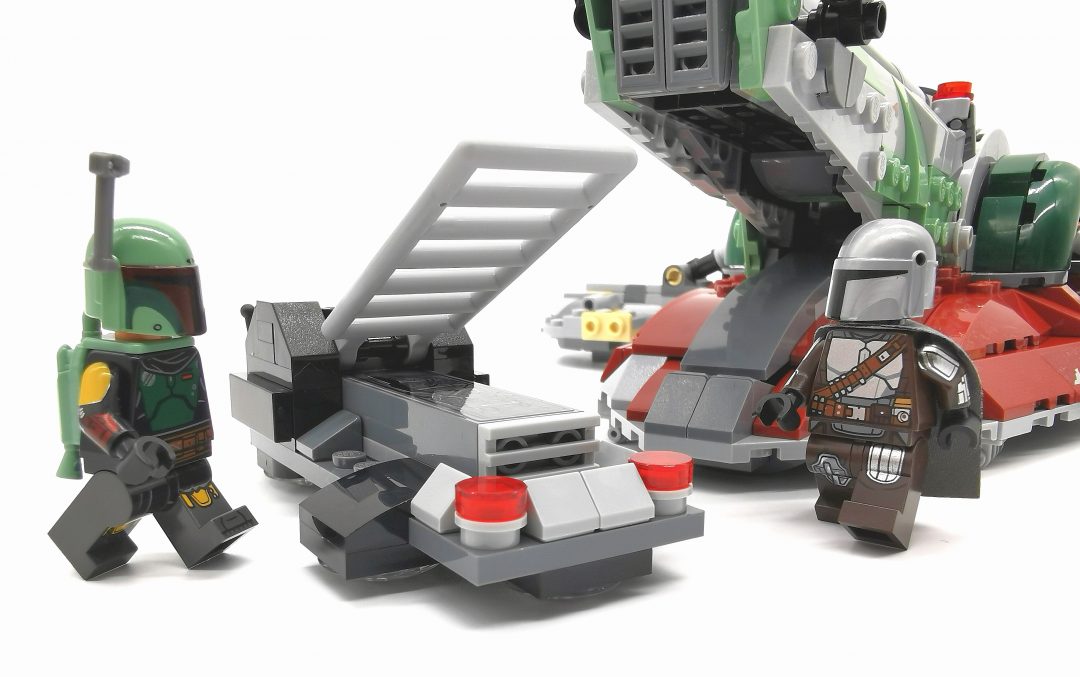 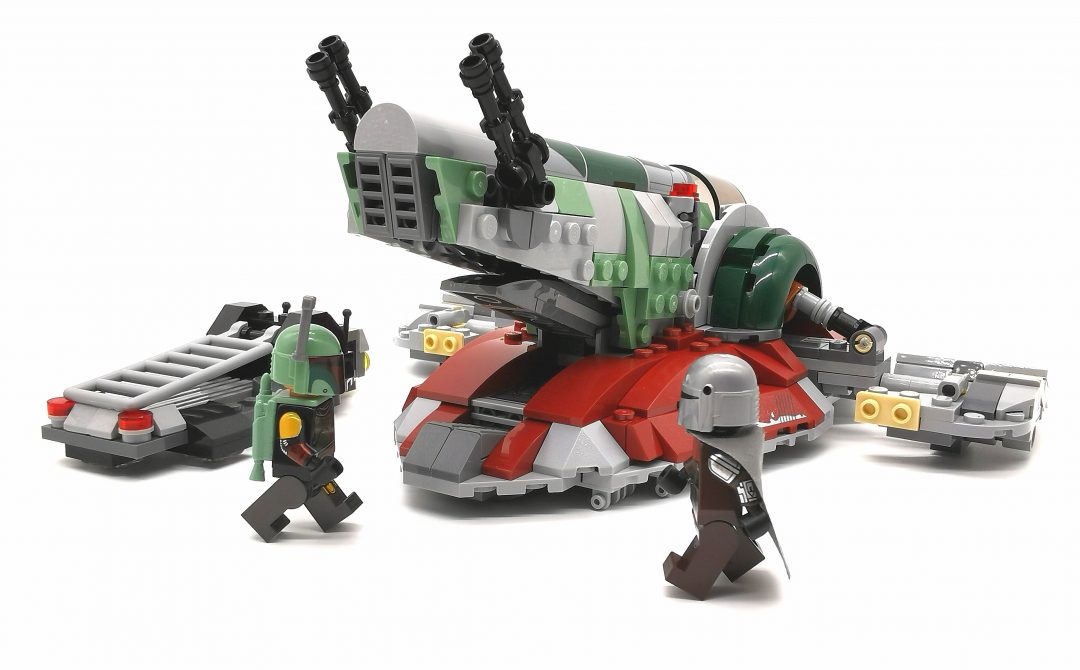 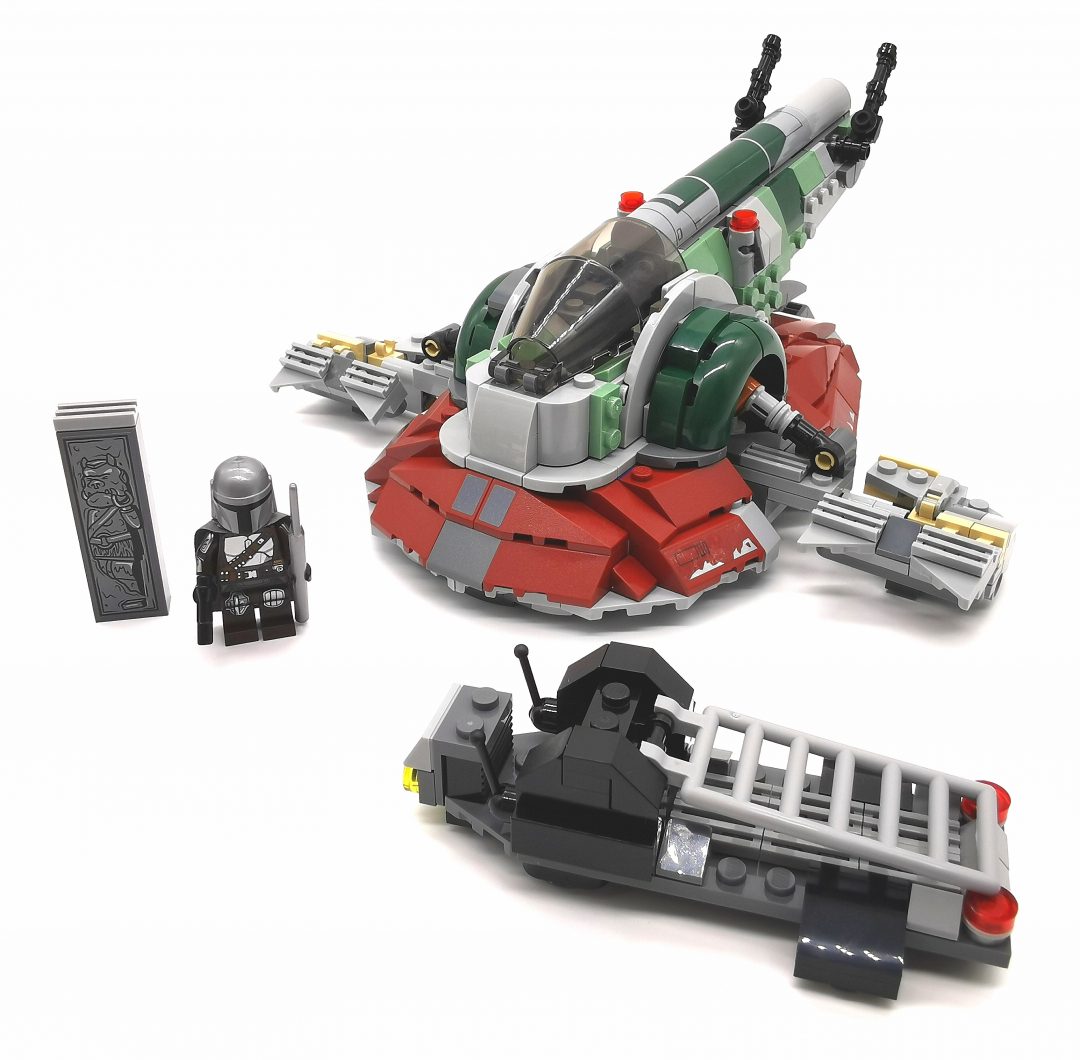 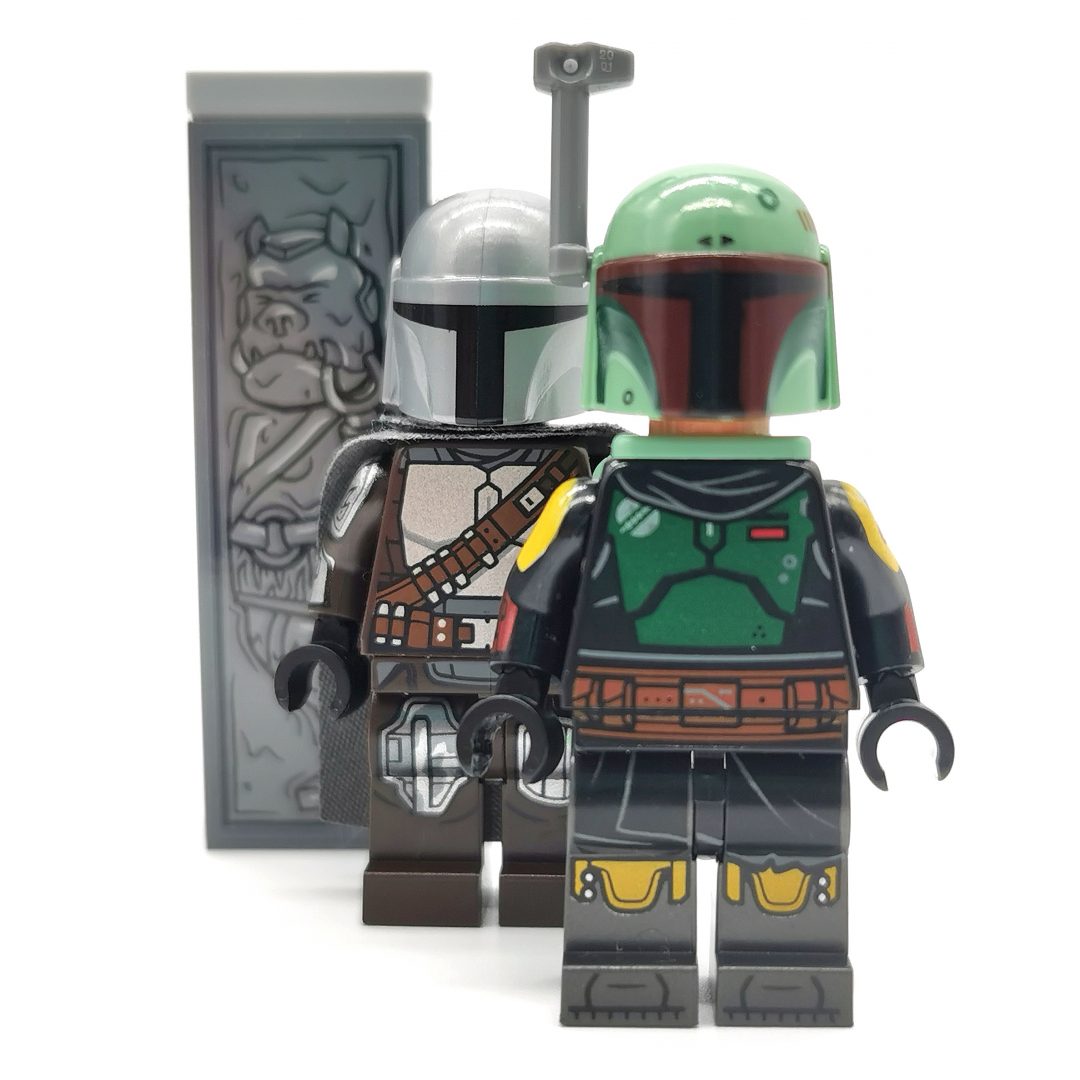 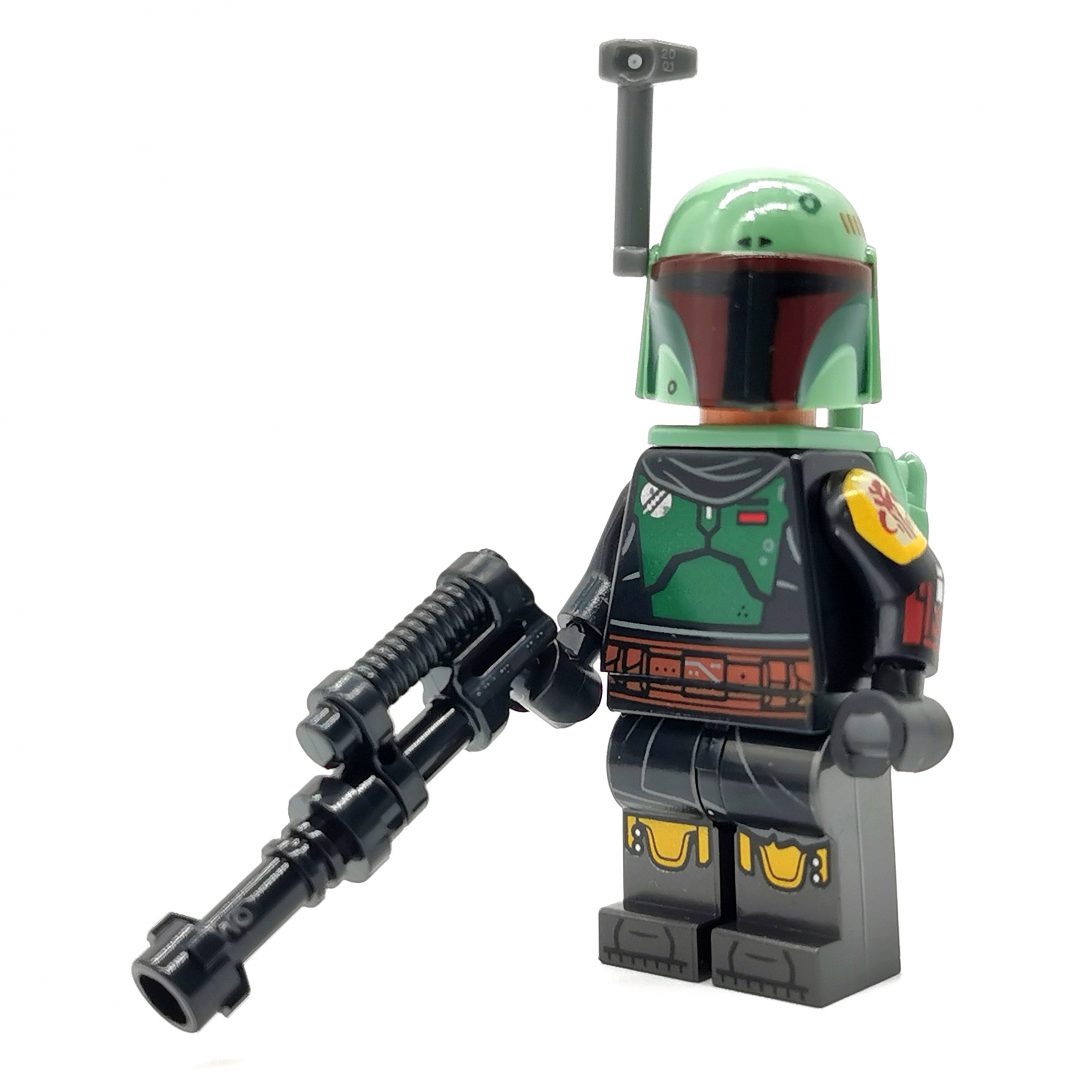 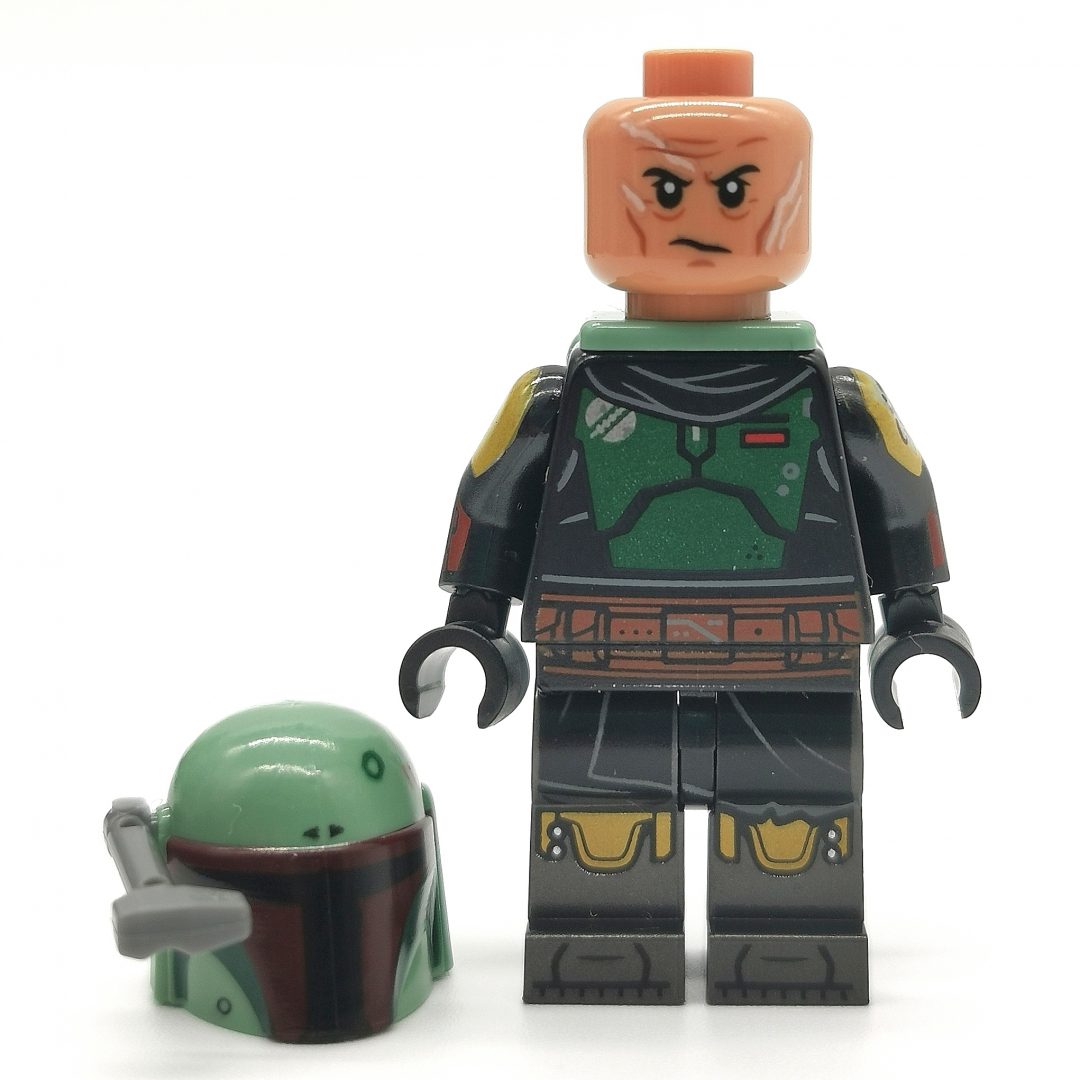 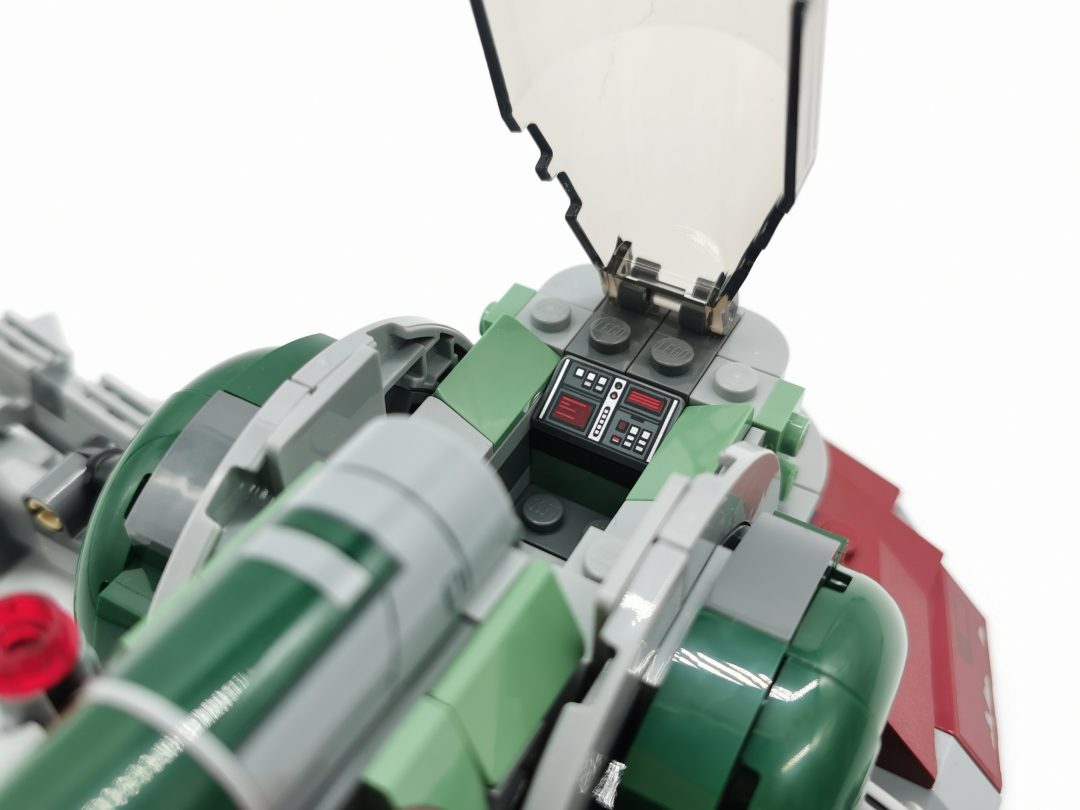 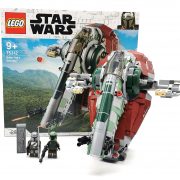 LEGO Digital Designer Is Being Replaced By BrickLink Studio! 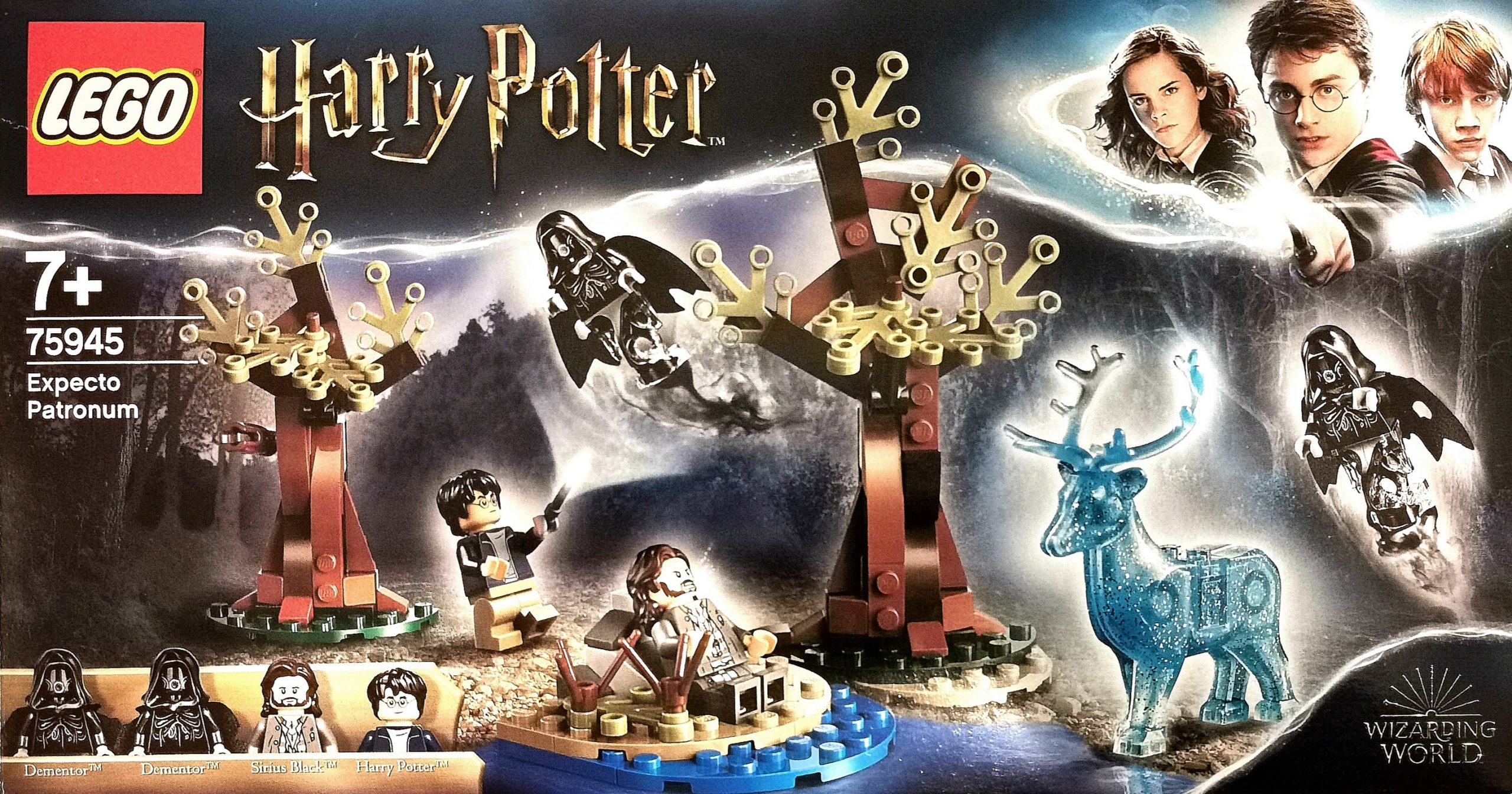 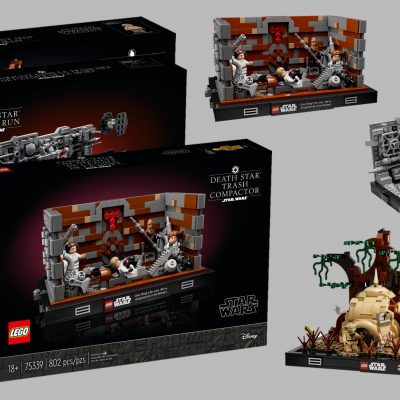