LEGO Speed Champions is a theme that I rarely buy, it’s not because they’re bad, far from it, I’m simply just not into cars. That being said there are some exceptions such as the Lamborghini Countach, any American Muscle style car, and today’s review, the Aston Martin DB5 (76911) taken straight out of the James Bond movies!

Being British many people expect me, and everyome else in Britain, to like James Bond as he himself hails from old blighty. This also isn’t the case, you rarely find me watching a 007 movie as again I’m just not into them. I do know enough to get me through, such as the iconic scenes, quotes, his favourite drink, and of course the cars.

This is the main reason why I picked up the new LEGO Speed Champions set, it’s a classic Bond car, so without further a-do I’ll get into the review. 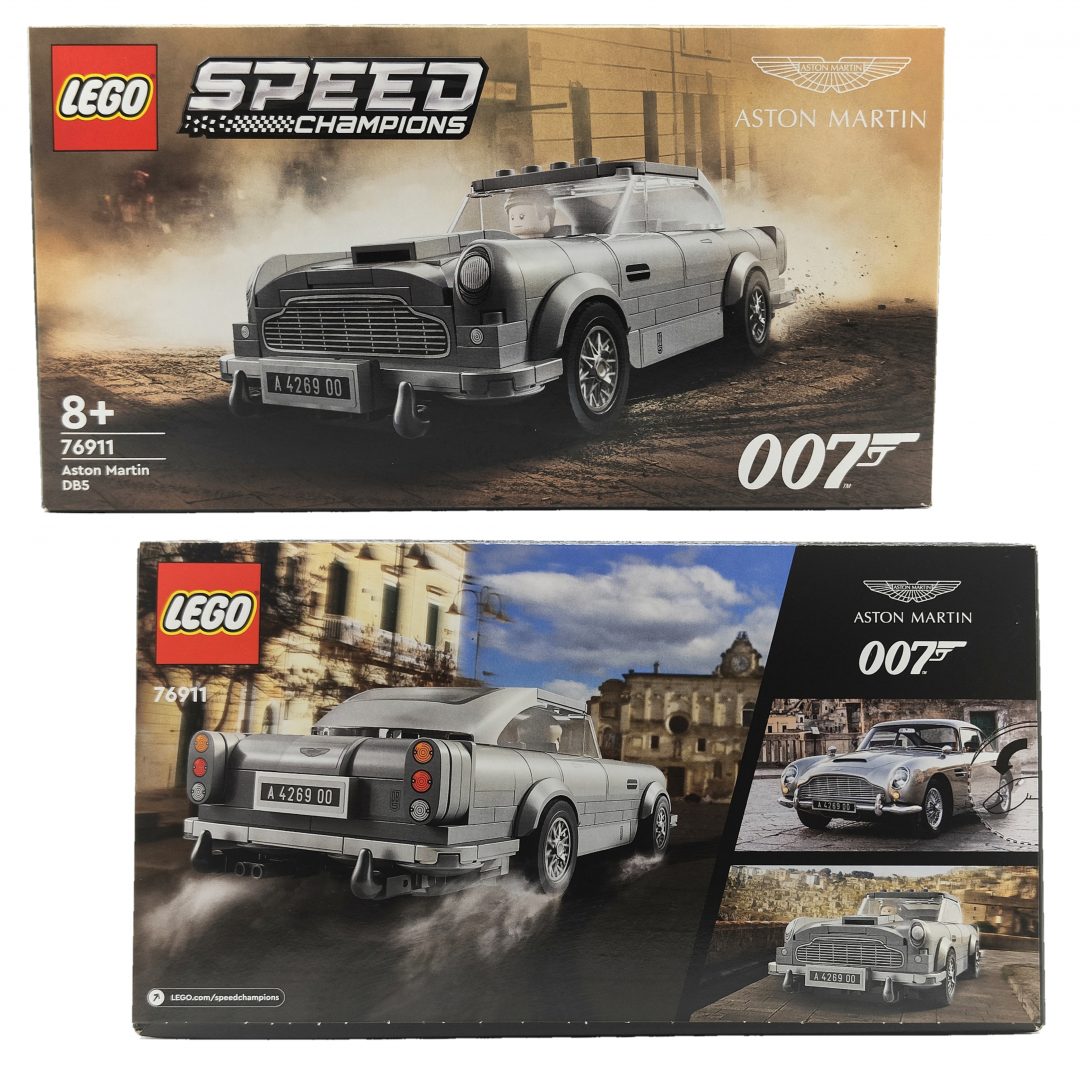 The front of the box looks very appealing and features the brick-built Aston Martin DB5 racing along a dirt track next to a building, kicking up dust as Bond drifts out of a sharp corner. You can see the Aston Martin logo in the top right corner with the 007 logo below that. Also on the front are the set details, including the name, set number (76911) and the suitable building age (8+).

Flip the box around and you’re presented with a real shot of the brick-built Aston Martin DB5 along with a photo of the real-life car. As I mentioned above I’m not a car person, but when it comes to these classic automobiles I’m a sucker for them, it’s the unique shapes and curves that really appeal to me.

Being a relatively small set with a piece count of 298, you only get two numbered bags inside, along with a sticker sheet and instruction manual. As you can see from the photo above the manual is the ‘no frills‘ style, I actually prefer the ‘less is more‘ approach.

The sticker sheet is chock full of grey designs and licence plates, most being grey panels with a small amount of detail on them for example an air vent or the DB5 logo. Once on the vehicle they really do look the part and even though the detail is small it adds so much to the overall build. 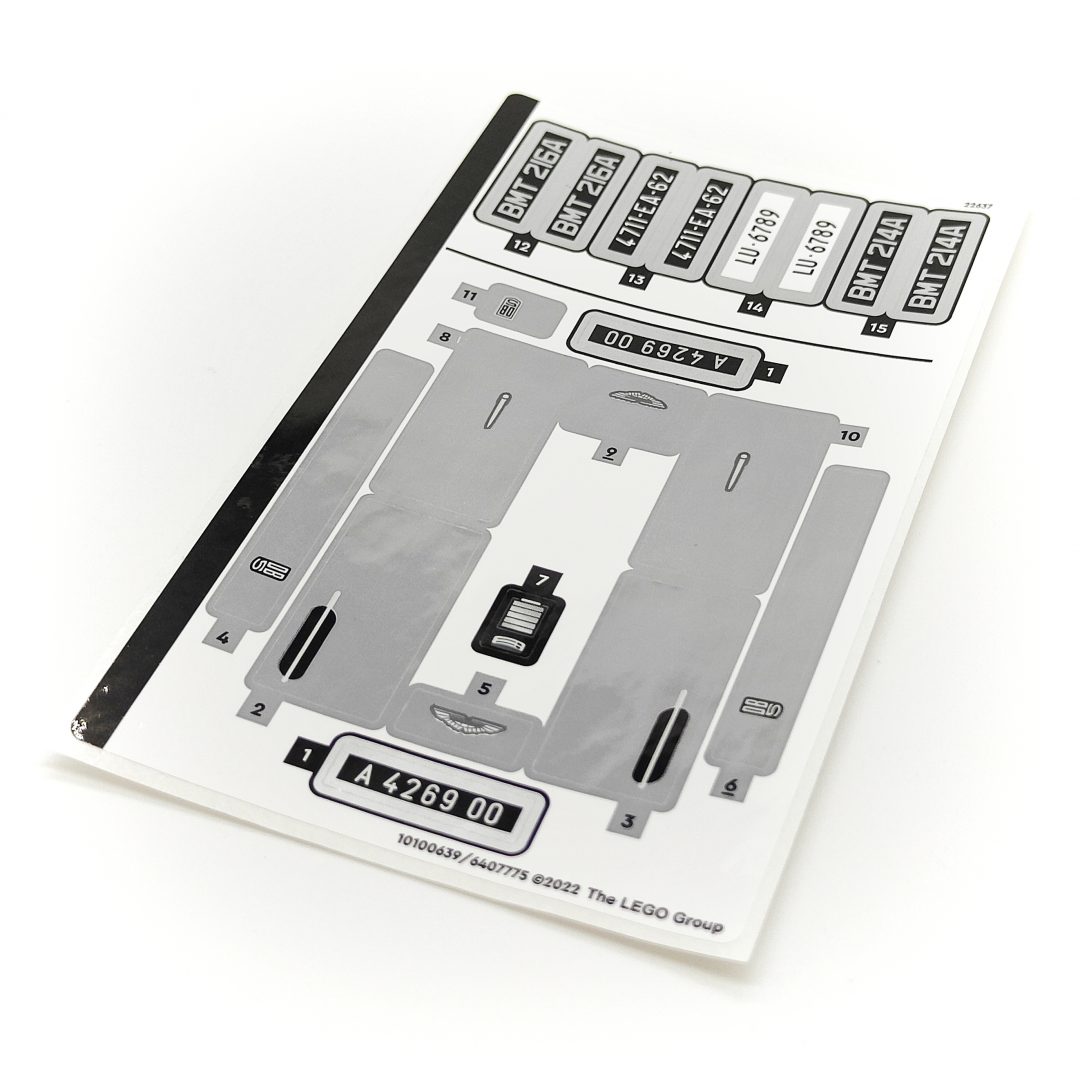 Onto the build portion of the review and as always with smaller sets I build them live every Wednesday on our Instagram channel (@thebrickpost). Please feel free to follow us and tune in, it’s great fun and I get to have a chat with you whilst I build.

Slicing the box open and tipping bag one into my small build tray imarks the start of the LEGO set building journey and one I love the sound of, especially all the bricks & pieces hitting the table.

First off the instructions ask you to build the James Bond Minifigure, which we do, but we’ll discuss that in better detail later on in the review.

Following on from previous LEGO Speed Champions sets this car is again 8 studs wide, which we’ve all come to love over the past couple of years. It allows for a more realistic end product and more importantly fits two Minifigures inside. 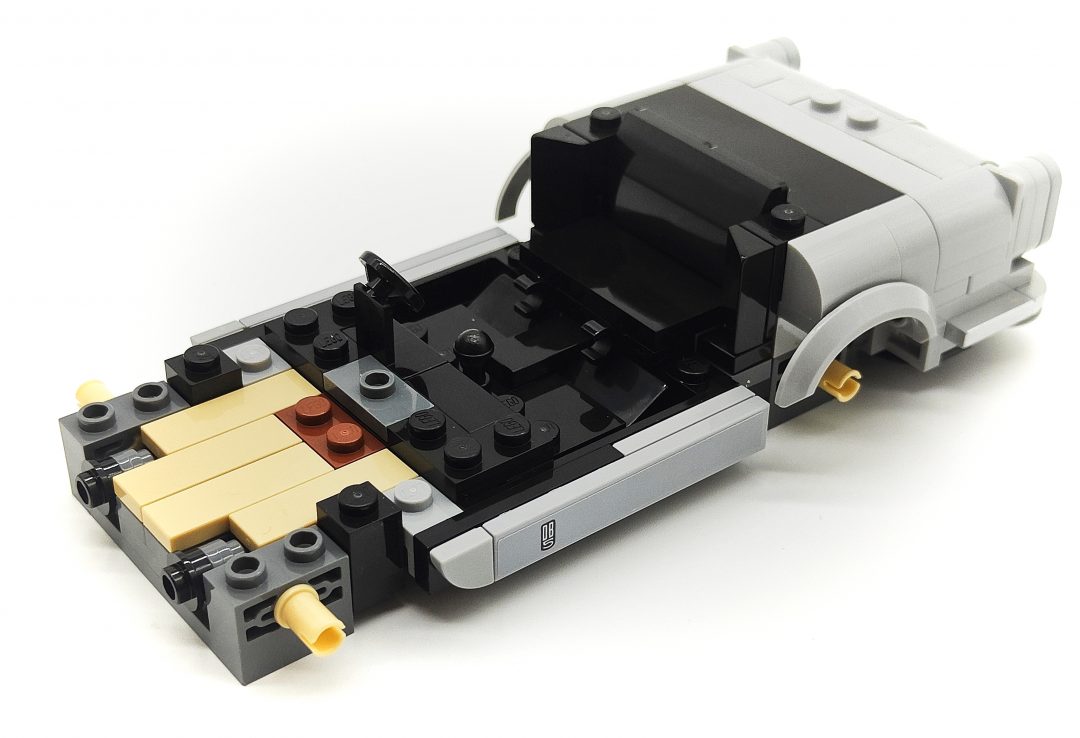 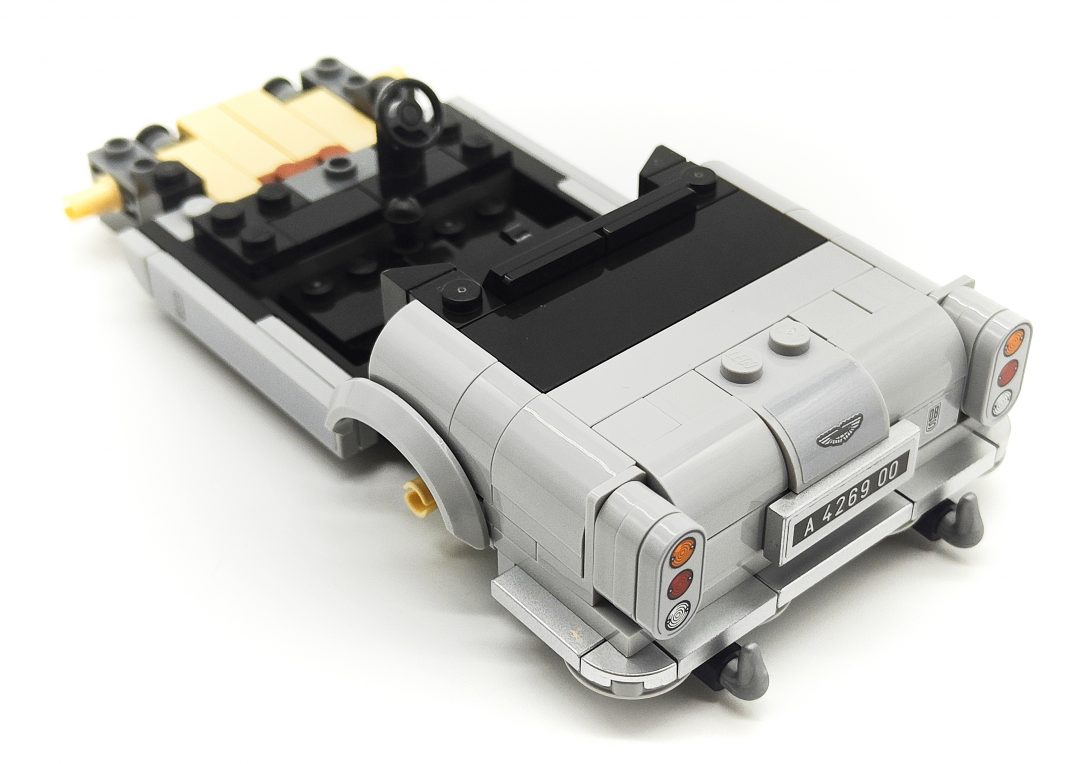 Bag one makes a start on the base and pretty much finishes off the rear of the car, complete with the Aston Martin’s iconic grey curves. Here you add the first lot of stickers, the small DB5 logo along each side, an Aston Martin logo in the boot and the license plate. There are also printed parts included, the rear lights, front grille and very small front lights, which you’ll see in bag 2.

Surprisingly there are quite a few silver chrome elements, including 1×1 curves and tiles. Each of the additional licence plates have a tile too, making for quite the selection of spares at the end, if you choose not to implement the extra stickers. 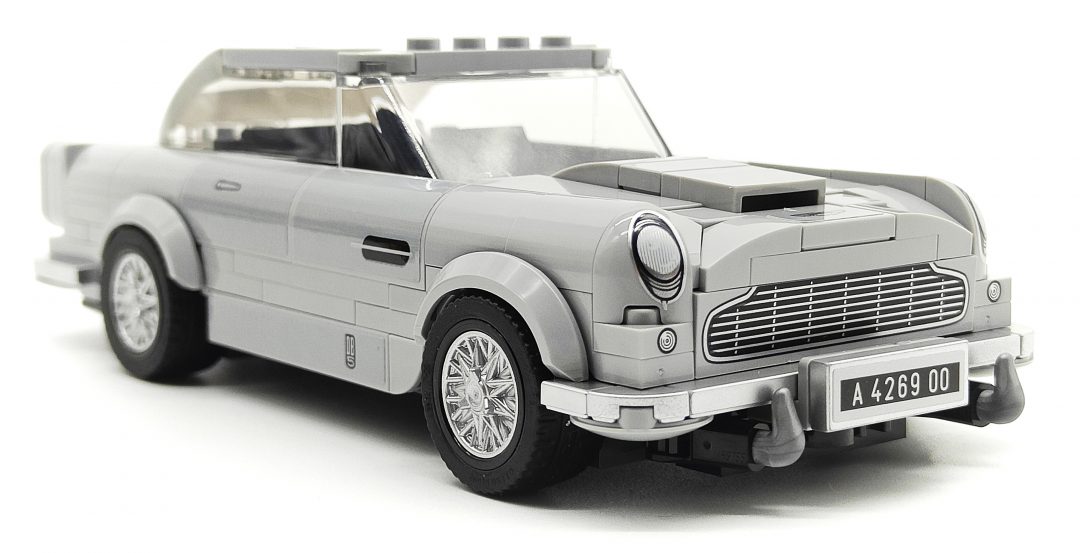 Bag 2 builds the front of the car and finishes off the set as a whole. Constructing the front and adding a block of parts that somewhat resembles an engine, it also has the intake part exposed in the bonnet making for a cool looking feature.

The iconic shape is captured well here in LEGO form and looks absolutely stunning in person, you really get to see just how the designers have constructed a great looking vehicle at a fraction of the size of its real-life counterpart.

Using 1×2 and 1×4 curved pieces that run along each side of the car is a great choice of part and draws the eye to the roof which sits slightly in from the 8 stud wide body. The roof piece is especially cool as it is a brand new mould and printed element. Sometimes a new mould is needed and here is totally works! 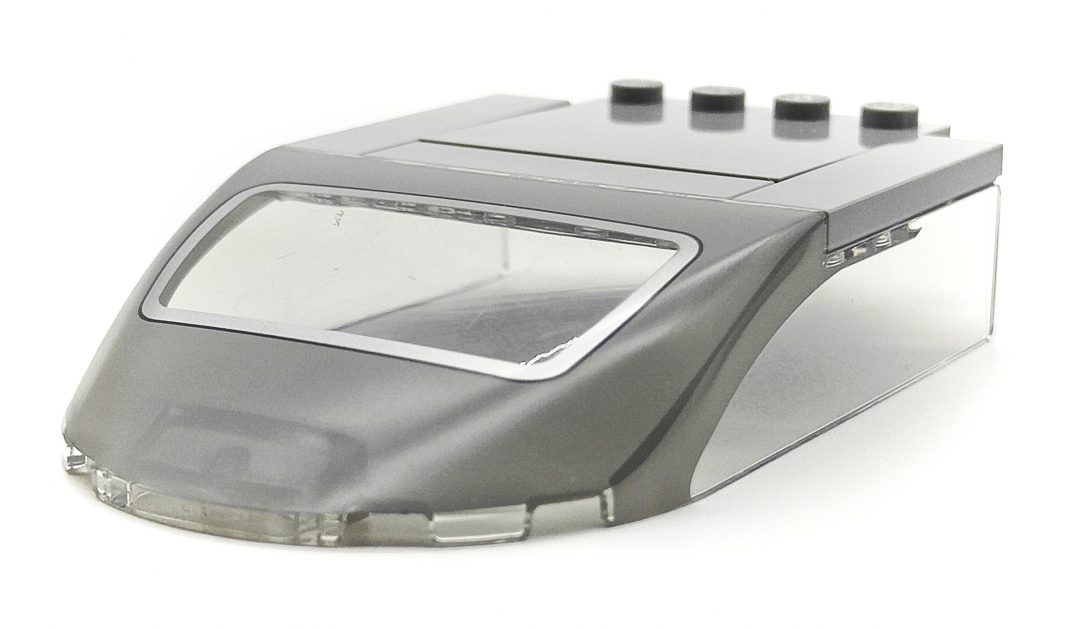 The only gripe is have with the whole build is the clutch power of the roof to the body of the vehicle. It connects by just two studs at the back of the roof, which is in no way enough and constantly comes off with the smaller of efford.

Inside the car there is surprisingly a fair amount of room, with two seats in the front and a slightly smaller seat in the back, enough for Bond and 3 guests. The dashboard also has a few details that flesh it out well, including a steering wheel, gear stick, and air vent (could be a radio/speaker). 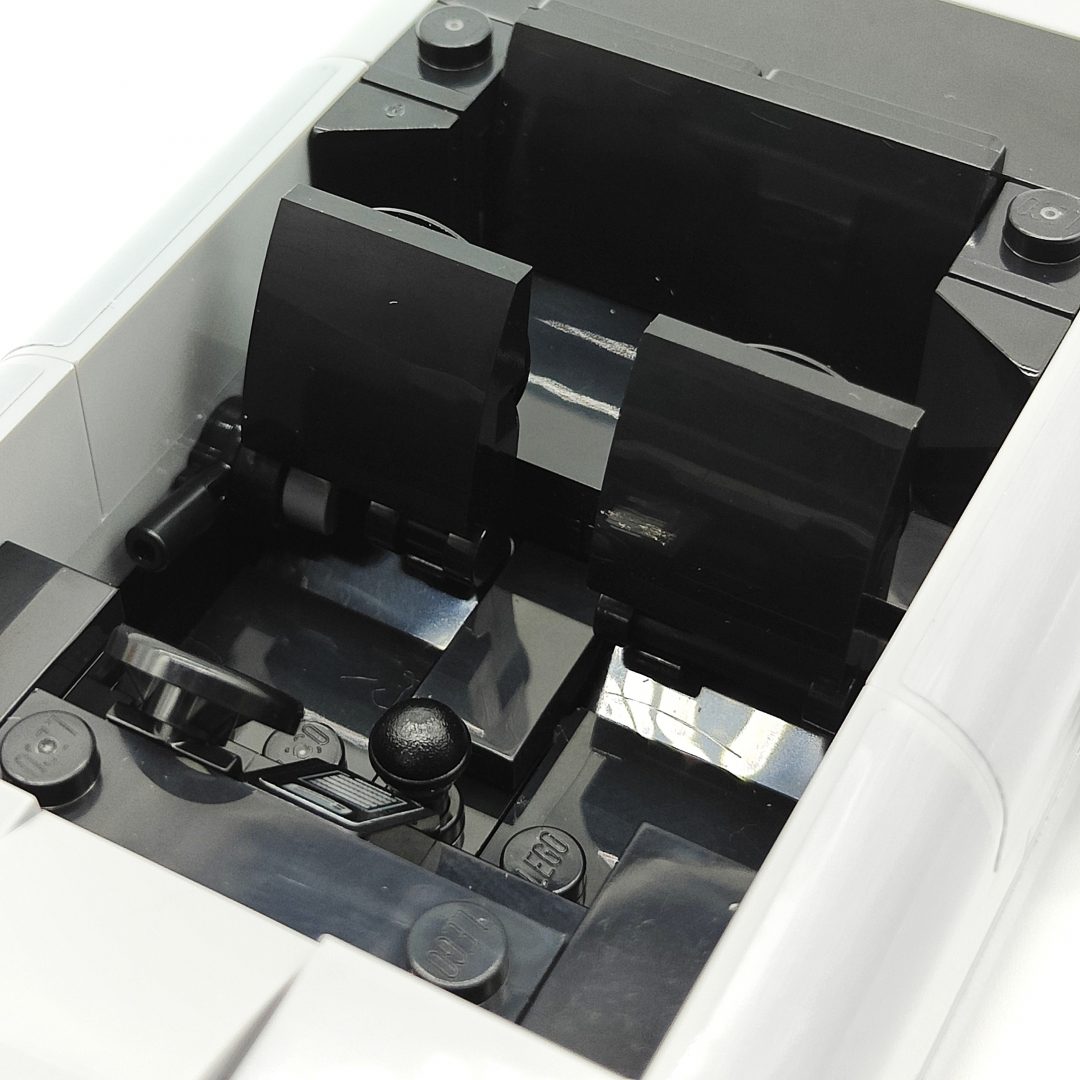 Speaking of Minifigures, there is one included, James Bond himself, more of him below.

This Minifigure is the one and only James Bond that is currently in existence, it’s entirely exclusive and probably the main reason to pickup this particular Speed Champions set. Don’t get me wrong the Aston Martin DB5 is an amazing car and the LEGO build it very enjoyable, it’ll look cracking Sat on display, but the James Bond Minifigure makes it what it is. 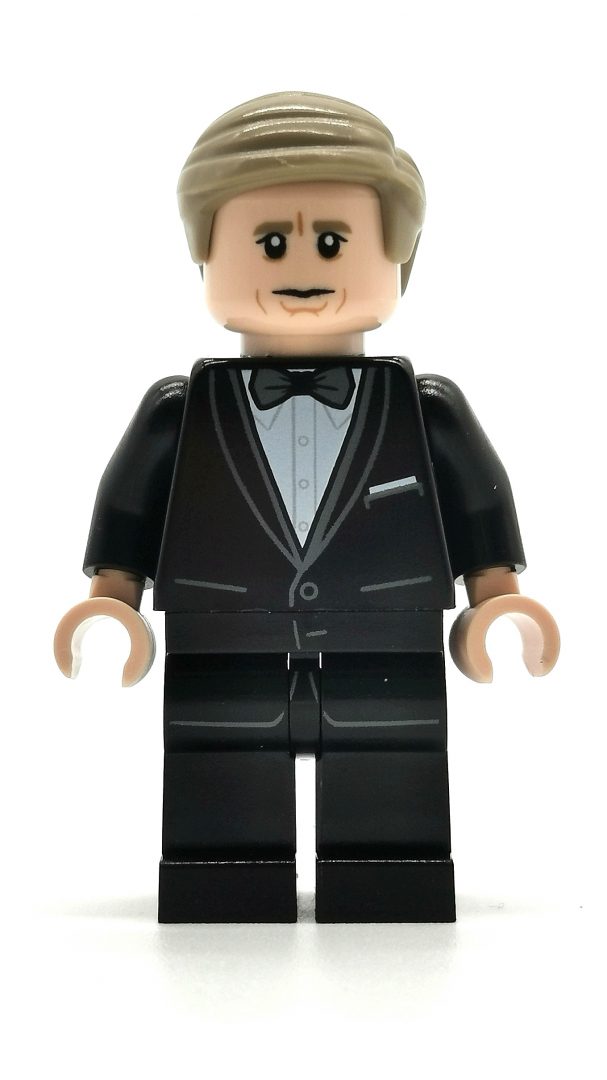 Bond looks very dapper in his exclusive Tux print, complete with bowtie. It’s unclear which Bond this Minifigure represents but that doesn’t matter one bit, we finally have a Minifigure based on the Worlds more famous Spy!

He sadly doesn’t have an alternative face but that’s totally fine with me, the one we get is a little expressionless but we won’t hold that against him.

His choice of accessory is a little strange, unless he uses one in the novels. The LEGO designers decided to give him a Wrench, a great tool or weapon but it isn’t a gun, James Bond always carry a gun. There is a workaround as there is a space gun piece left over once the car is complete, thanks to the way the twin exhaust attaches to the underside of the car. Simply grab the spare gun and pop it in Bond’s hand, hey-presto! 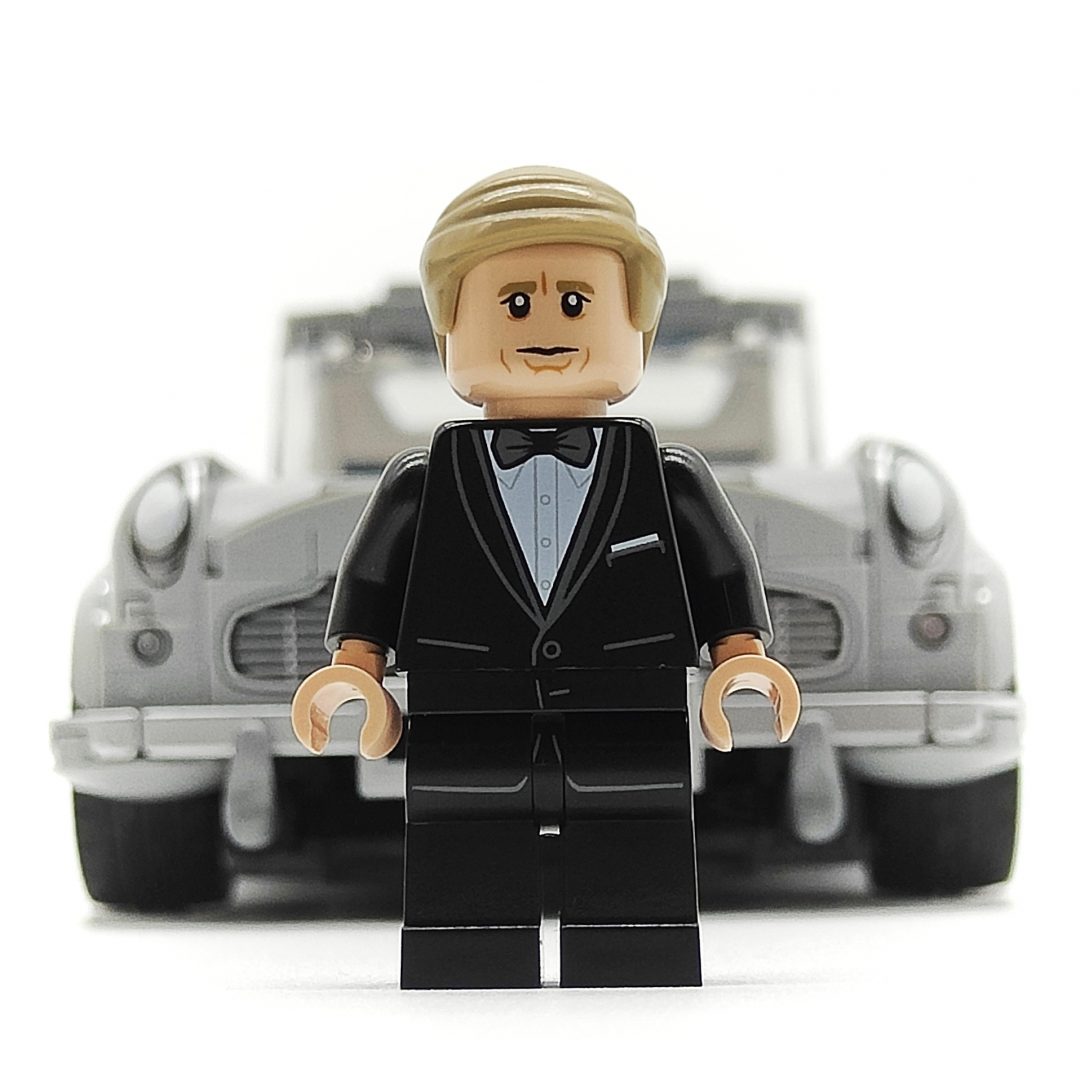 Overall the LEGO Speed Champions Aston Martin DB5 (76911) set is highly recommended, not just for Bond or Speed Champions fans but for those of you like me who appreciates classic cars and their style.

The build is enjoyable, although very grey, the stickers aren’t to much of a hassle, and the details are great, making for a good looking vehicle and one that’ll sit well on display.

Bond himself is perfect for Minifigure form and comes complete in his Tux. He is exclusive to this set and that alone is a good reason to pickup this set. The design and printing is done well and even though it’s subtle the design works well.

Coming in at the new higher RRP of £19.99 it is still a great price and well worth the parts and Minifigure. If you shop around you may be able to grab this at the old price of £17.99.

Thank you for readong this review, we really appreciate your time and support. Please bookmark us and check back regularly for new LEGO news & reviews. Why not head below and leave us a comment of how we did and what you person think of this set, if you have it. We love hearing from you! 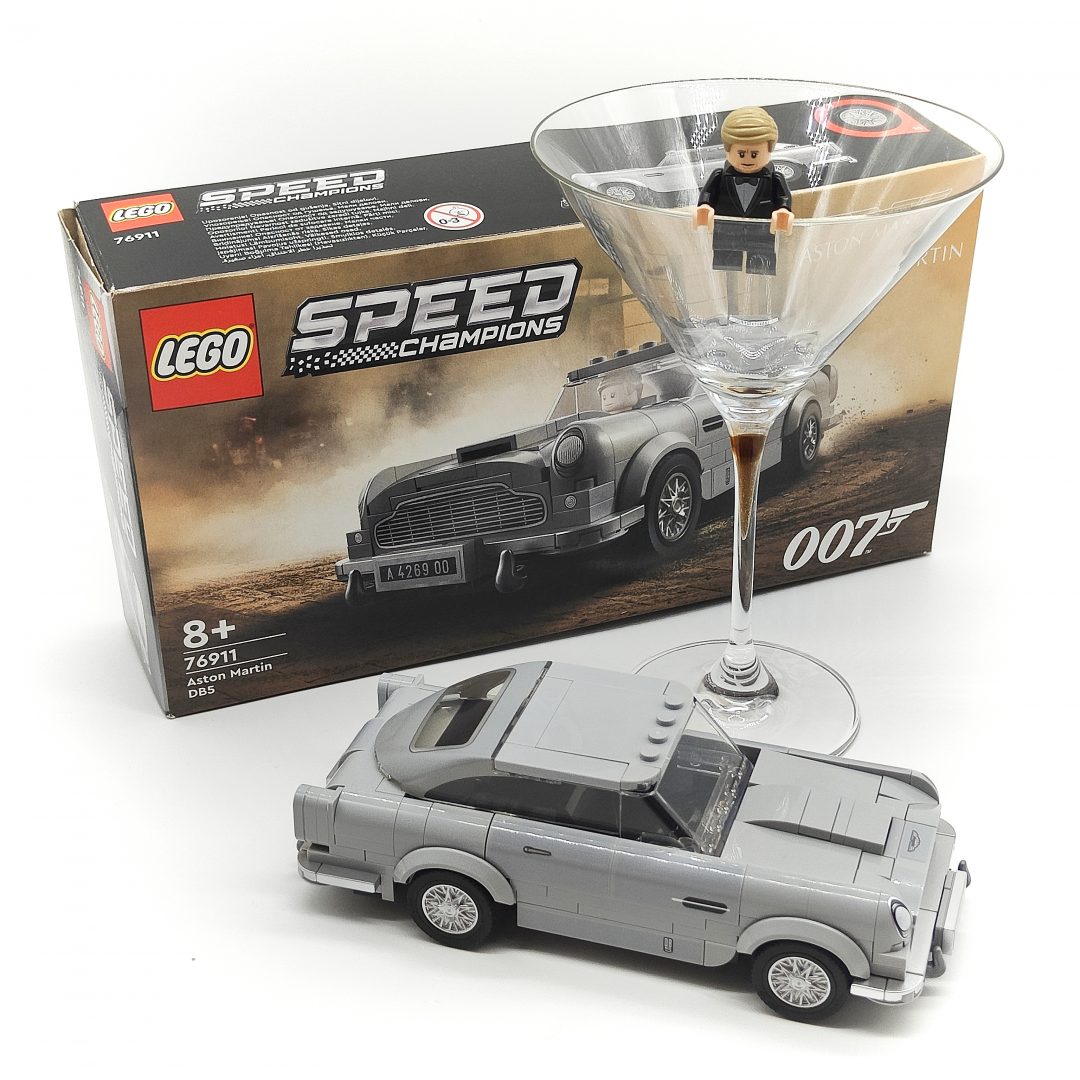 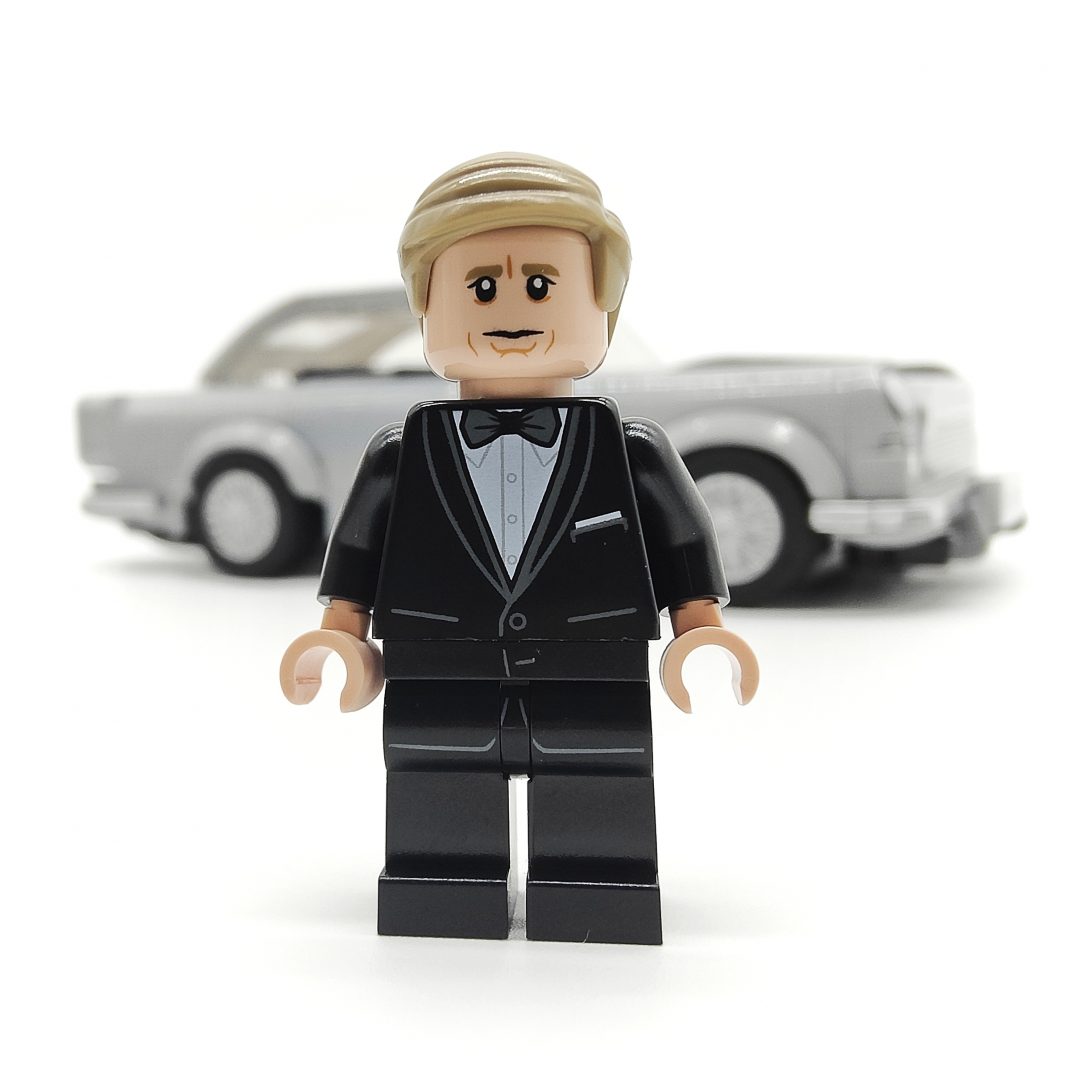 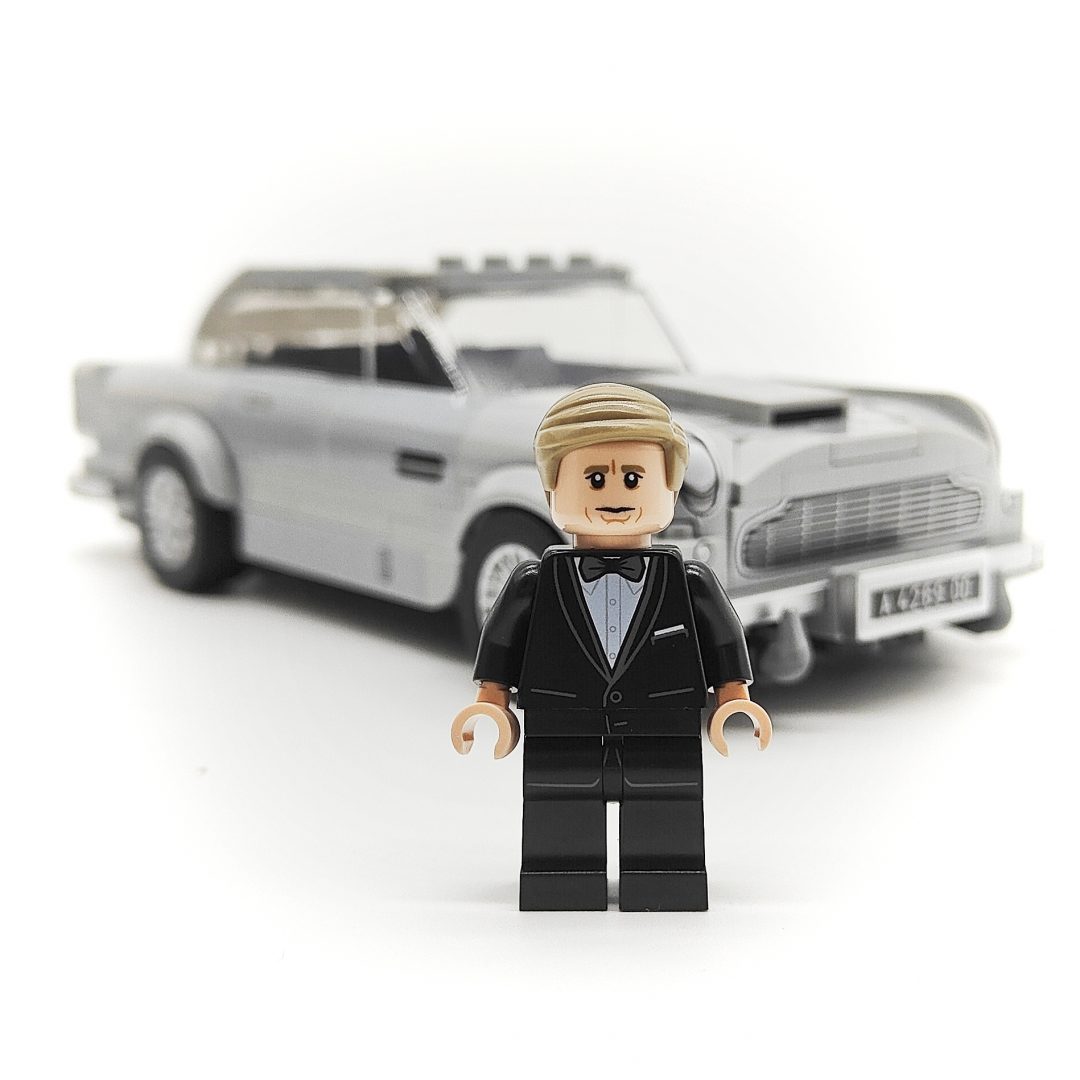 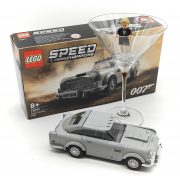