In recent years LEGO and Marvel have gone hand in hand, although LEGO do eventually get around to making pretty much most of the important scenes and artifacts found within the MCU (Marvel Cinematic Universe) they’re sometimes a bit slow, take todays review set for instance, little Groot appeared in this phase of his life in the Guardians of the Galaxy Vol 2 movie back in 2017, so to release a LEGO set so long after is a tad slow in my opinion.

That being said I am so glad they have and they’ve done him justice, at least in terms of looks and scale, stability not so much. Please read, or listen to, our review to find out more about LEGO Marvel I Am Groot (76217)!

Read to the end of the review to find out more details about a website exclusive giveaway. 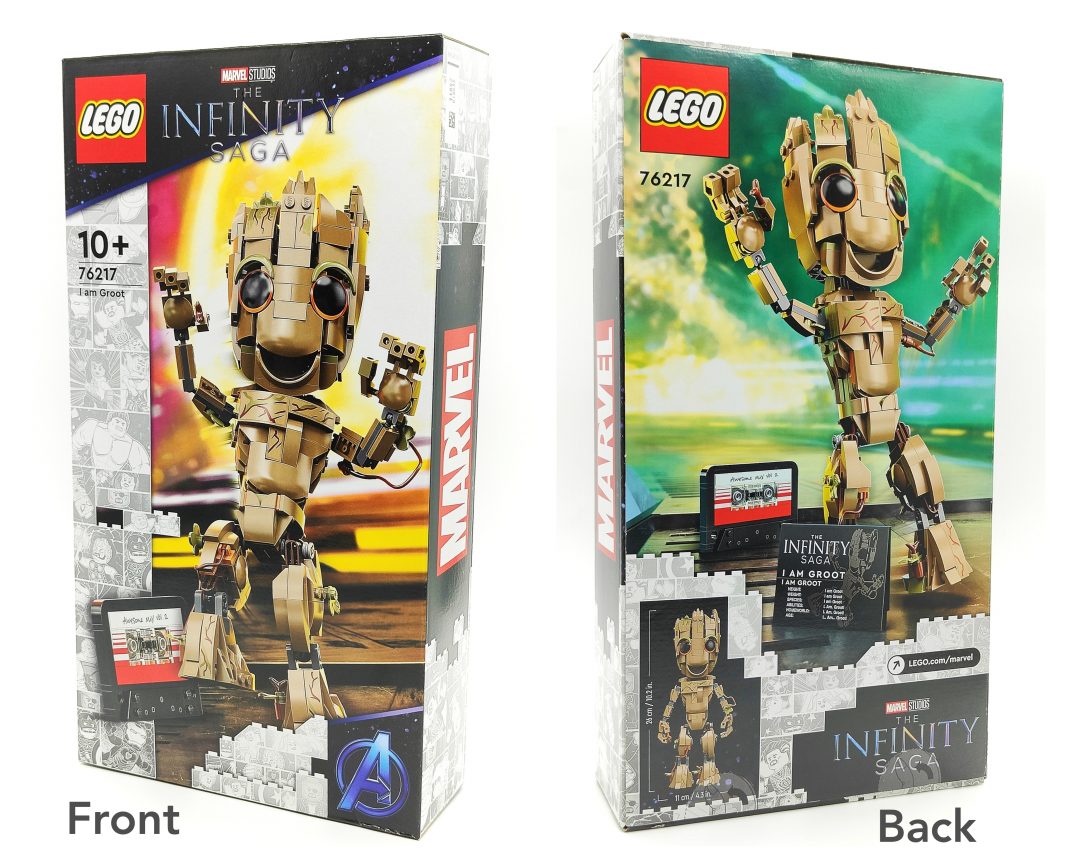 Sporting the newer design both the front and back of the box looks great with a lot of detail to capture your eye.

The front features the background from which this set is based on, the huge battle the Guardians of the Galaxy have at the start of Vol 2 against a multi-dimensional beast called the Abilisk.

Here Groot constantly ignore ls his friends and continues to enjoy himself by dancing to ELO’s Mr Blue Sky song playing on the boombox.

Flip the box around and the background changes to a shade of green, looking back at Groot in a slightly different scene from the same battle.

Sadly the UK boxes display very limited information on the box itself, giving the recommended build age, 10+, the set number, 76217, and the title, I Am Groot. No piece count has ever been given on a set like this, that is reserved for the 18+ sets here in the UK. The set does contain 476 pieces if you’re interested in that kind of information. 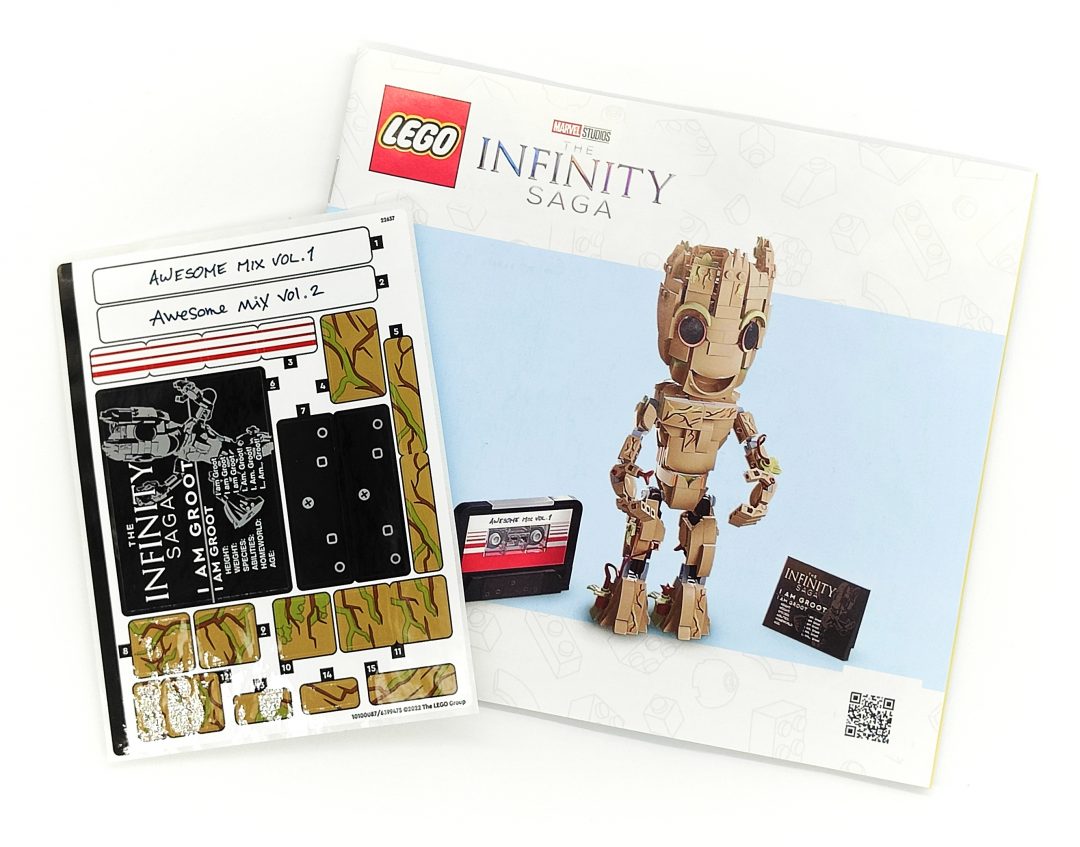 Onto the instruction manual and sticker sheet now and as you can see the manual cover has changed, quite a bit. This new design is supposed to give a “visually consistent unboxing experience” as LEGO put it and I would agree, it does mean I have to like it, although oddly I do. It’s simple yet effective and in a way visually pleasing to see just the set itself take centre stage and not a fussy background image.

The sticker sheet is mostly filled with wood styled detailing for Groot himself along with a large plaque sticker and Cassette Tape decoration. As I say often when it comes to stickers, I honestly don’t mind them now and have come to love them, well that maybe a tad strong, but I certainly don’t loathe them like I did when I first got back into the LEGO hobby. 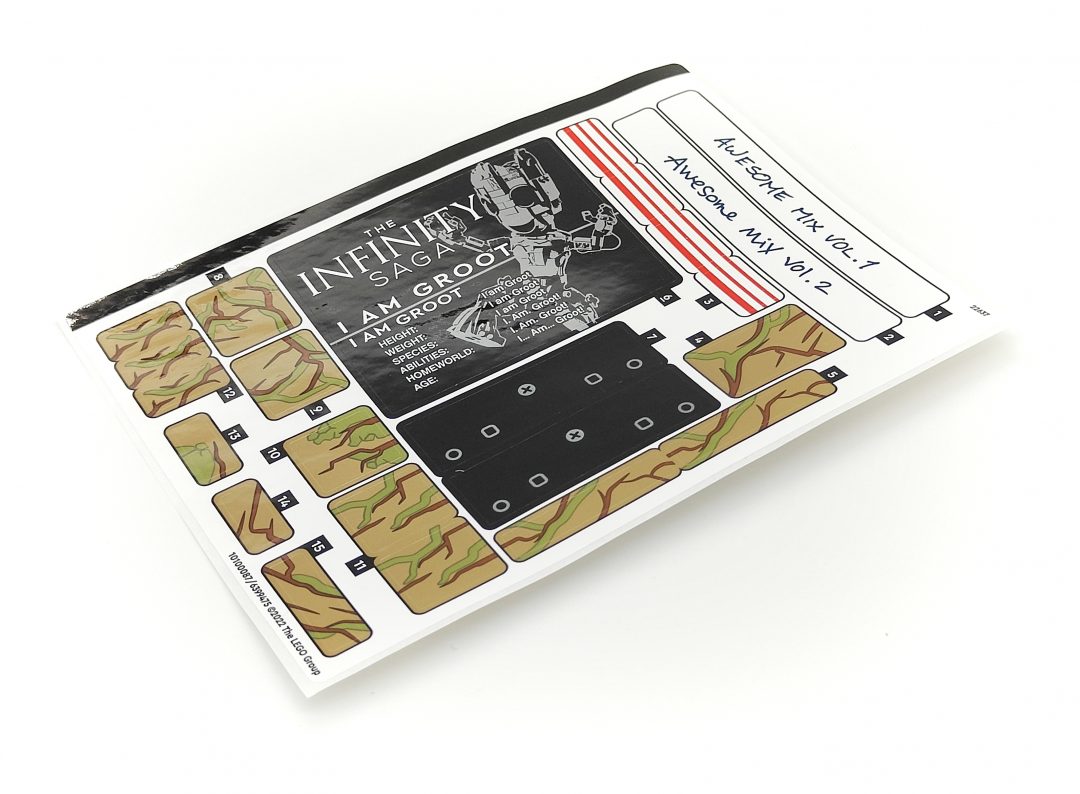 Also inside the box you’ll find three numbered bags, which surprised me as being quite a low number for a set of this price, £44.99, I was expecting a fourth or possibly fifth bag, but no, just the three. This leads us nicely onto the build segment of the review, where Groot comes alive! 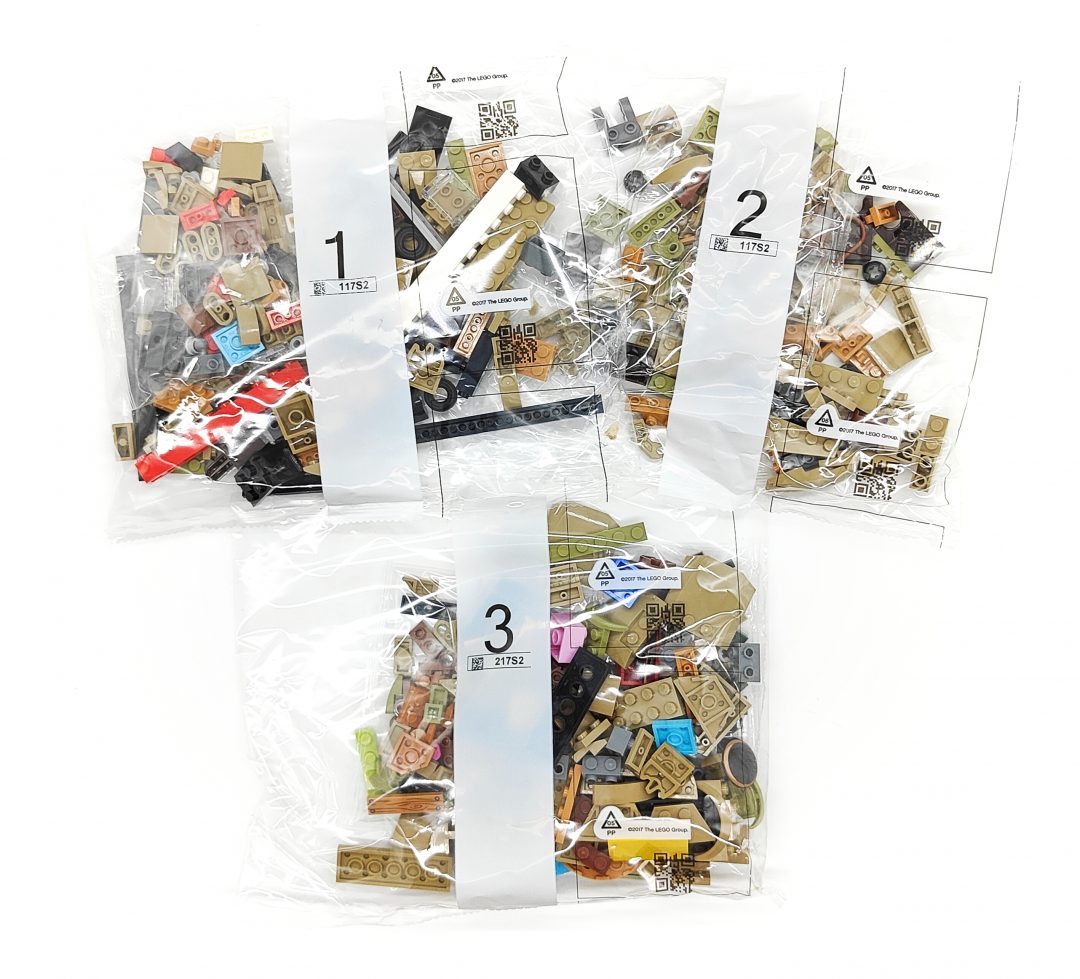 Sitting down to build this live on our Instagram channel, as I usually do with these slightly smaller sets, I couldn’t wait to build Groot, having bagged him from The Entertainer toy shop as I was nowhere near a LEGO store on release day.

This has been on my radar ever since LEGO revealed it and one I knew I had to have sooner rather than later.

Cracking open the first bag and spilling the contents out onto the table is part of the whole charm of building LEGO, the sound of the crinkling plastic, small parts hitting the hard surface, catching the odd runaway piece, it’s great! 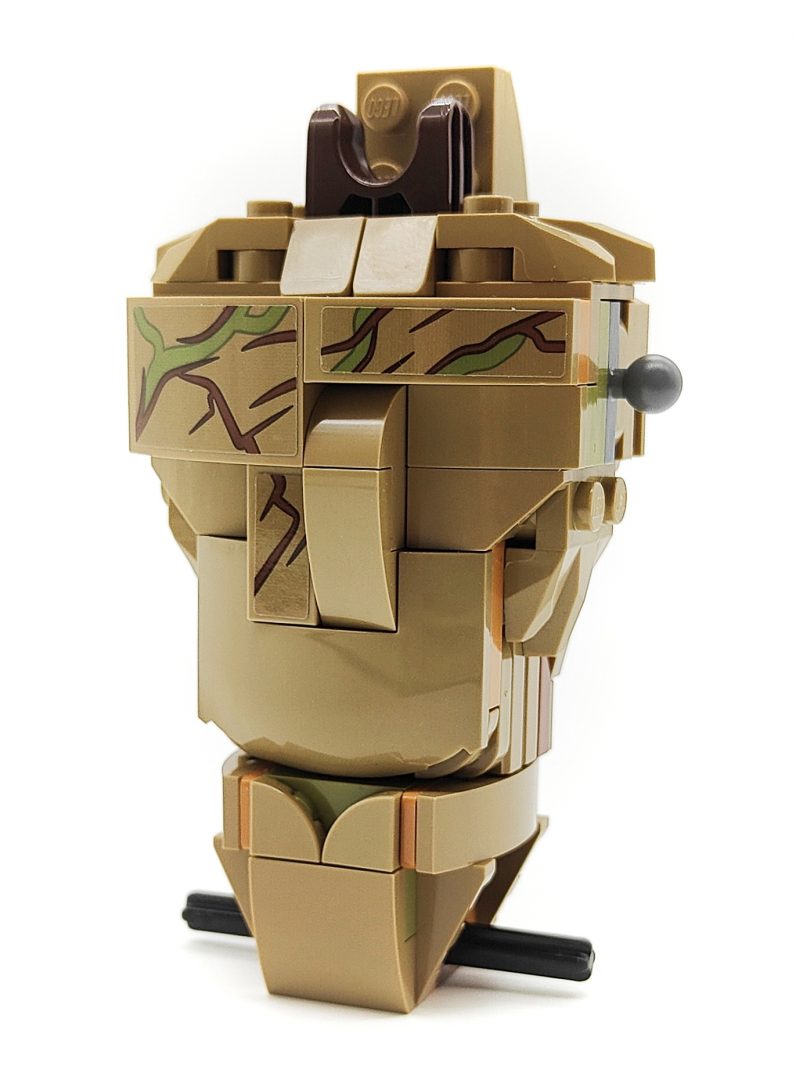 Bag 1 constructs the torso and hip sections of Groot along with the Cassette Tape and Plaque, more about the side builds later in the review.

The size is very similar to the LEGO Marvel Iron Man Figure (76206) set that falls under the same vein as this one. Building up and layering the parts to make a somewhat rounded and 3D torso, with bits protruding here and there to give a sense of raw wood. This is where the stickers come in very handy and for once I’d say they’re needed, again printed parts would always go further, but I understand a sub £50 set doesn’t call for or warrant printed parts.

Ball joints and Technic pins are left exposed here ready for the arms and legs to be attached in bag 2. 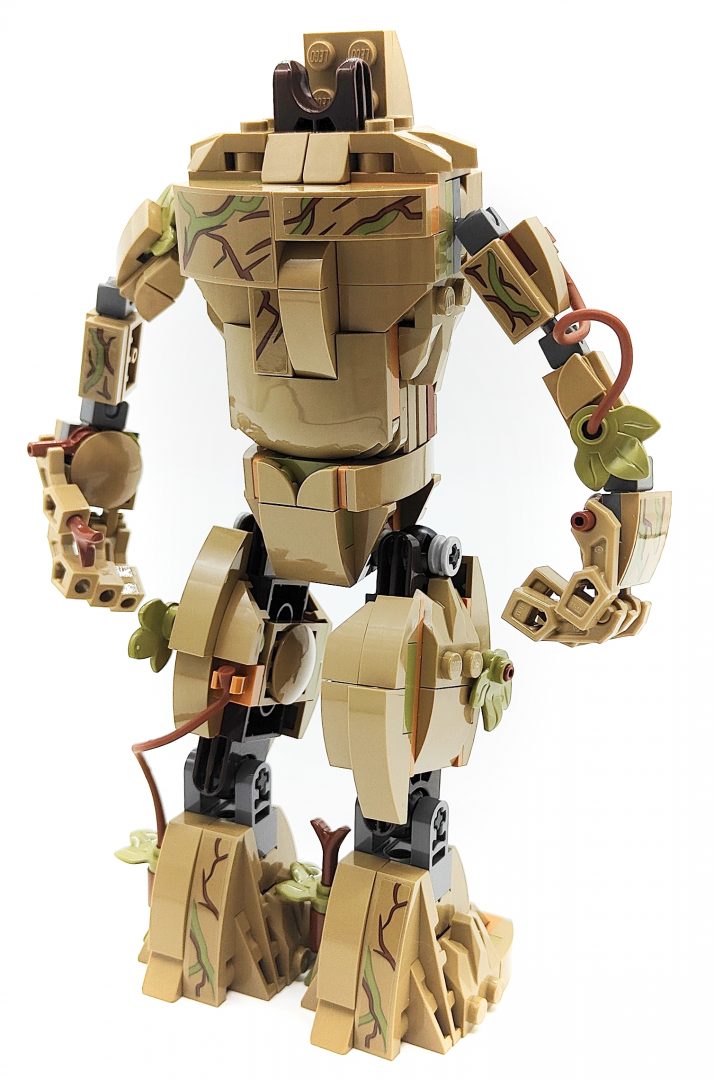 The same building techniques are used here to layer up and flesh out the limbs, adding details and stickers along the way. I really like how popping a leaf piece here, a twig part there, and a couple whip elements really add a lot to the overall look and gives you a sense of it could actually be made of wood.

Each arm is only made up of a handful of pieces and have surprisingly good articulation at all three joints, the shoulder, elbow, and wrist. Stickers and extra detailing again help to add life to the set, I really do like the use of the whip elements and greenery, especially the twig at the end of his right thumb, it’s the little things that usually make the biggest impact. 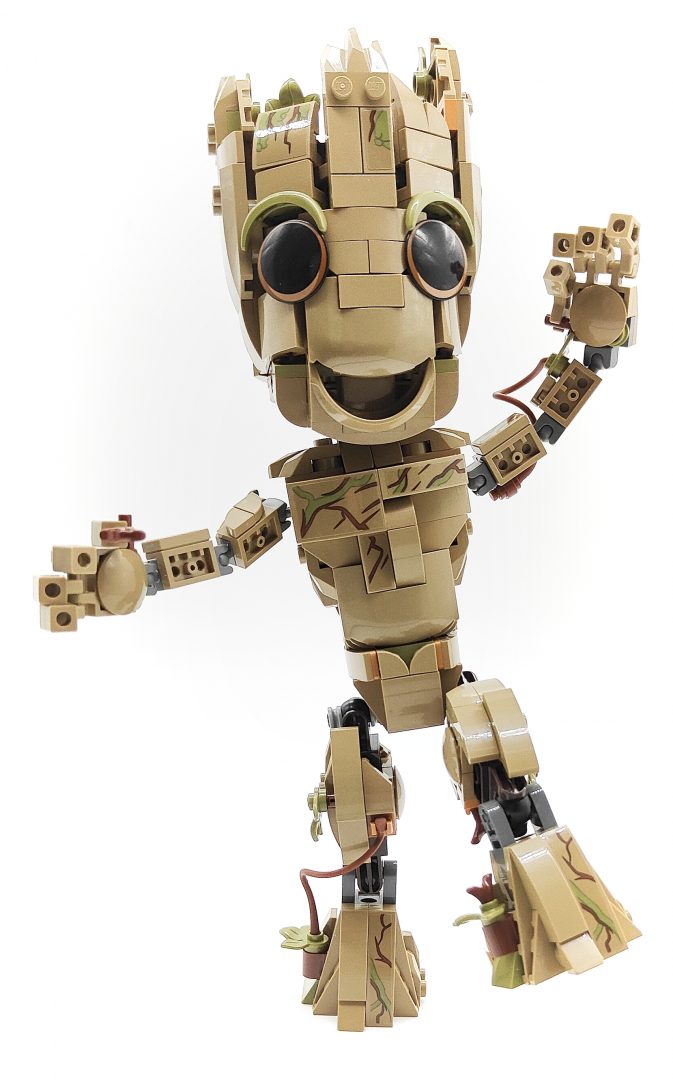 The final bag is purely for Groot’s head, which I’d say uses the same amount of bricks as his body and limbs do combined. It’s very solid and quite weighty making the figure top-heavy and prone to slowly dropping and falling over.

The model itself looks absolutely stunning and definitely captures the essence and fun of the character. From his short stumpy legs, his thin arms, and slightly exaggerated head. He’s one happy little chappy too with a big grin on his face, that is made by turning a wheel arch upside down, genius!

His eyes are the only printed pieces in the set and they are very welcomed, I’d hate to try and attach stickers on a curved surface. The sliver of light brown on the eyes really do bring this otherwise lifeless looking LEGO set.

Having built this set and learning a few building techniques and new ways to create an angle or curved area has opened me up to what can be done with LEGO, If i ever get back into MOCs (My Own Creation) I’d definitely implement them somehow. 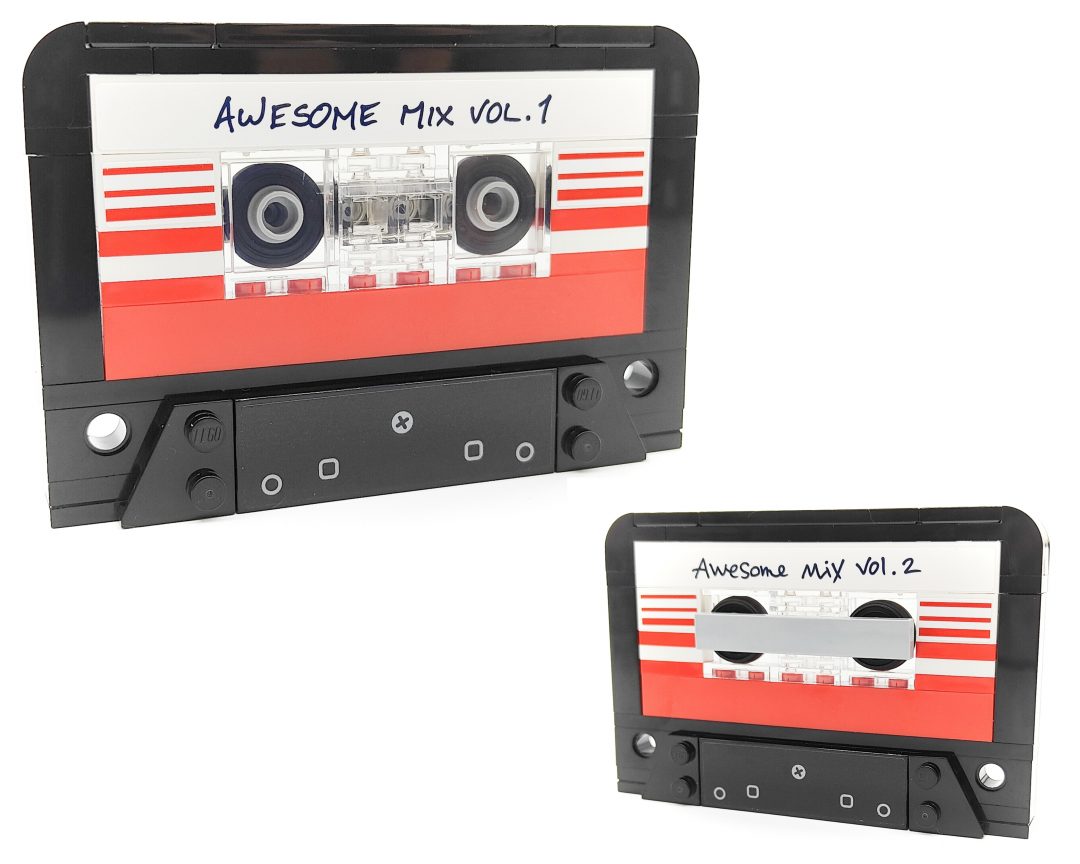 Also included in the set is a brick-built Cassette Tape that features quite heavily in the films, especially the first Guardians of the Galaxy outing.

Both volumes are present thanks to the stickers that sit either side of the 1×10 white brick, having the option to simply turn the Tape around is great although on the Vol 2 side there is an unsightly 1×6 grey tile holding the ‘tape reels’ in place, I guess this could be removed and the tyre pieces would still sit in place snuggly.

I absolutely love the addition of the Cassette Tape and so glad LEGO decided to include it in the set, it makes it just that extra bit special. 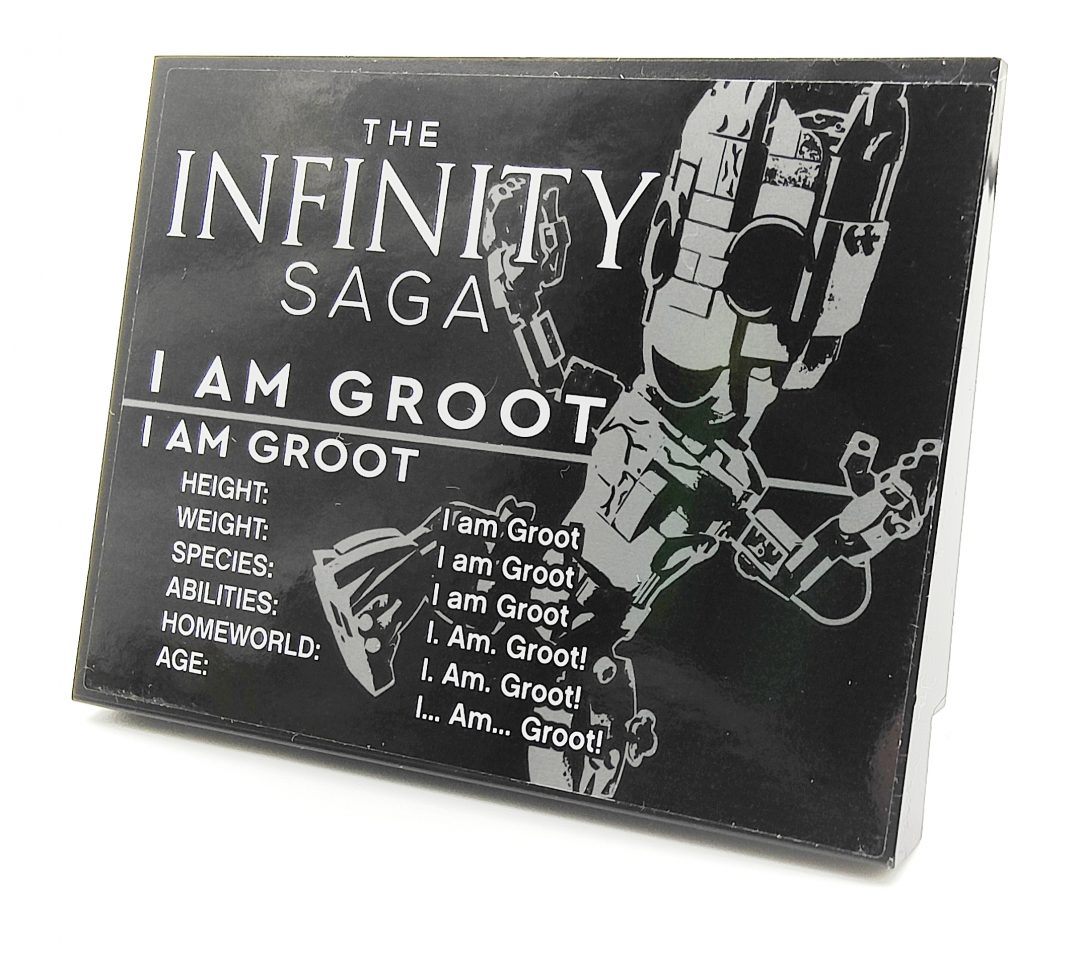 The Plaque is also a nice feature to include albeit a tad unnecessary. It is rather humorous as the stats simply say ‘I Am Groot‘. As you can see the my sticker application is soemthing to be desired and sits a little wonky on the large sloped tile.

Overall I’d happily recommend this set to LEGO Marvel and Marvel fans alike as it is a superb display piece that not only looks good on a shelf but is fun and whimsical too.

The build process from start to finish is enjoyable as it could be, with a ton of Earth tone pieces that make up Groot himself, a handful of black parts to make the Cassette Tape, and the large Plaque tile.

Posing Groot does prove troublesome at times as he is very top heavy. The ball & socket joints just aren’t strong enough to grip and slowly give way to the weight. Please watch the end of my Instagram live stream for a better example of what I’m jabbering about.

Thank you for reading my review of the brand new LEGO Marvel I Am Groot (76217) set, I truly hope you enjoyed it. If you have an would like to ask a question then please feel free to leave a comment below, we love hearing from you! 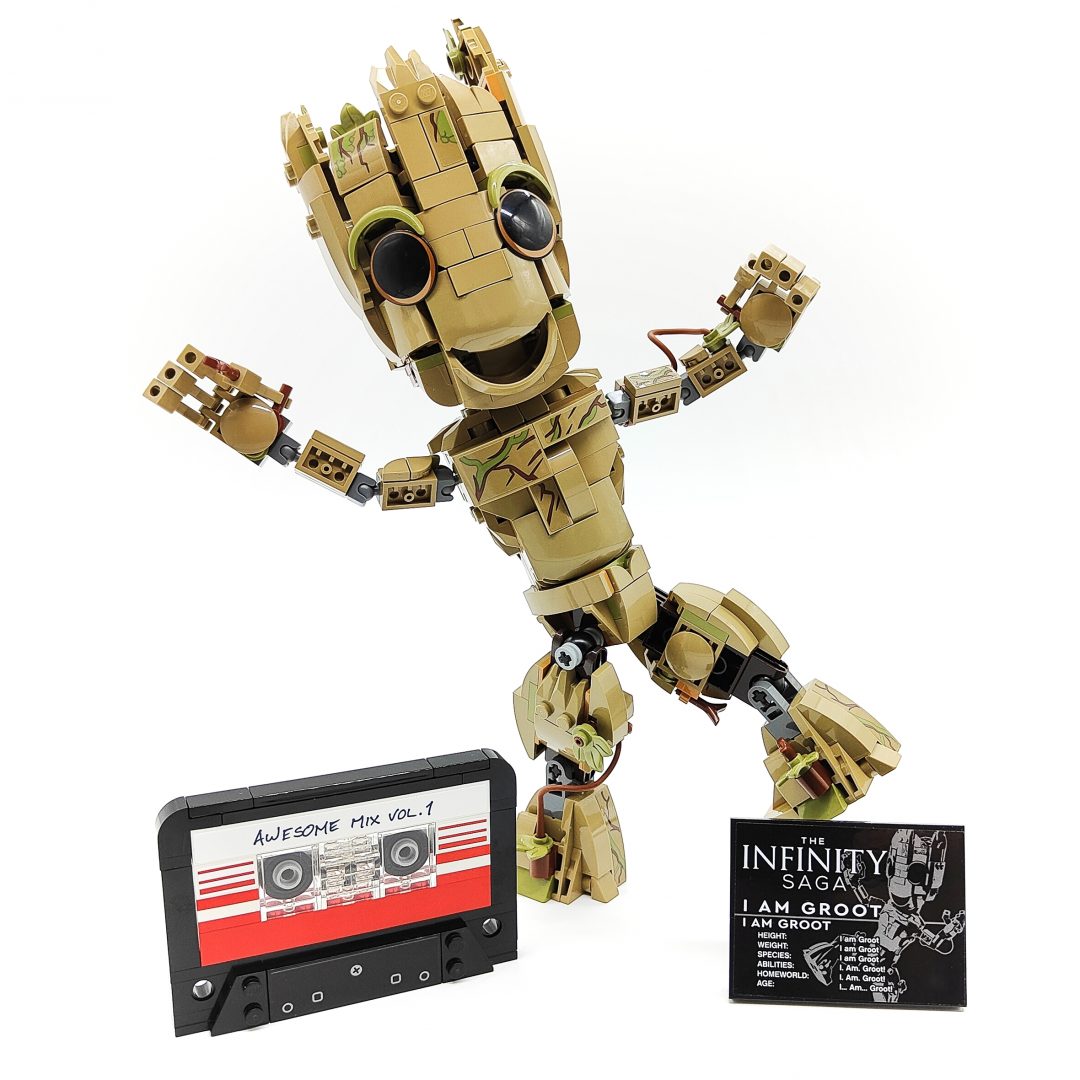 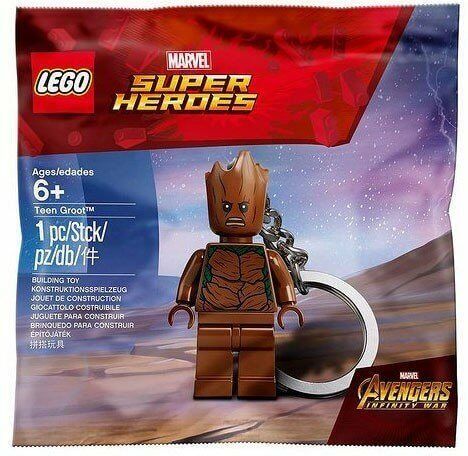 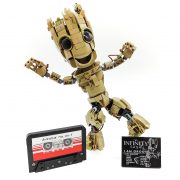 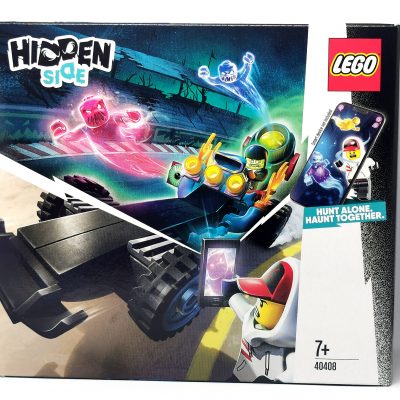