The 1st October has been and gone and with it a plethora of new LEGO sets to grab, including three of the most sought-after and affordable sets of the month. The LEGO Mini Disney Castle (40478), LEGO Santa’s Sleigh (40499), and today’s set review LEGO DC Batman Tumbler Scarecrow Showdown (76239)!

I managed to grab the three mentioned above on release via LEGO.com and finally got my delivery several days later. I then arranged an Instagram live stream to build the new LEGO Mini Tumbler with fellow brick heads (@brick_beat & @cabbagefacebricks), which was great fun as always and available to watch now via our Instagram account.

Personally speaking I prefer these smaller, Minifigure-scale, versions of iconic Batmobiles than the larger display ones. Don’t get me wrong the bigger ones are cool and look the part but being a Minifigure collector I would much rather have that fits. Making this a must get, to sit alongside the LEGO 66 Batmobile!

As always I snap a few photos of the box crack it open before the live stream starts, to ensure I get nice images of everything before it gets damaged or creased, even taking photos on the sticker sheet.

Inside the box we have four numbered bags, an instruction manual, and a small sticker sheet. 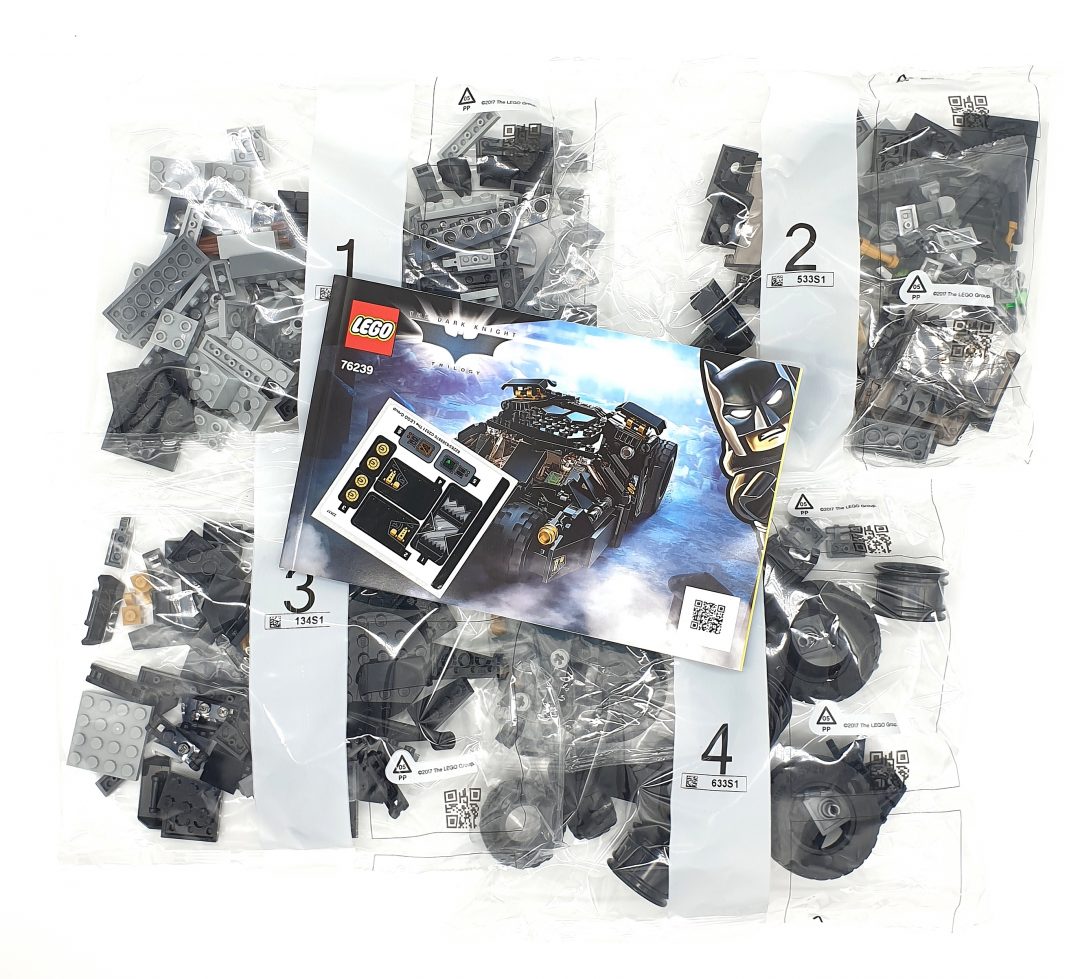 The sheet has a total of seven stickers on it which is OK in my opinion, as we all know they are a pain and LEGO should include more printed pieces, but I’m ok with having a small number of stickers.MMost of the designs are the same or mirrored and we fairly small.

The build itself has some very interesting techniques, which we’ll go into more detail as we get to them.

Starting with bag one we get a foundation built which looks more like a futuristic flying machine than a Tumbler at this point. The cockpit is pretty much complete with the two 1×2 slopes and their corresponding dashboard stickers.

The back axle is in place ready for the four chunky tires towards the end of the build.

An interesting part to this section are the angled SNOT (studs not on top) pieces and how they connect to the main body. With 1×2 Brick hinges at one end and 1×2 rounded plates at the other, giving it the perfect angle and join. 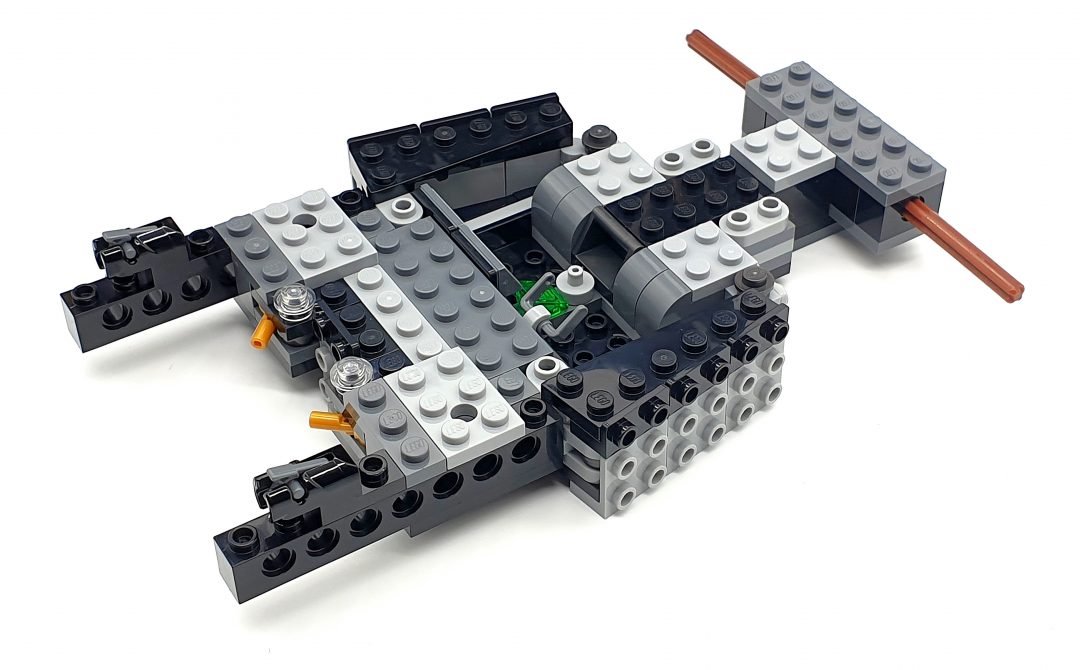 Bag two builds up the sides and adds detailing to parts of the vehicle.

To continue the unique shape of the Tumbler LEGO have used 3×6 clear windscreens on both sides and at the front. Also added are the two wheel guards at the rear, simply using two pieces which can be angled slightly. 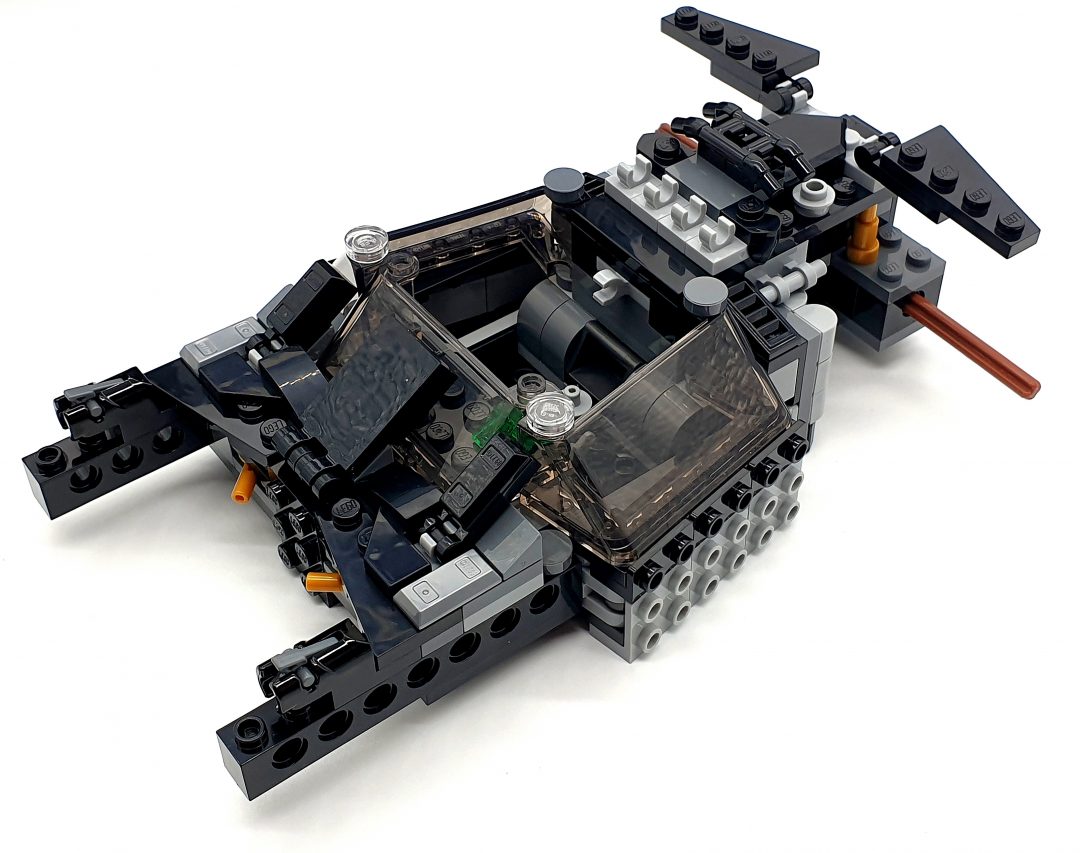 Bag three makes a more noticeable change with the addition of the roof covering and rear detailing. Again really nice techniques used here, including the thin wing shaped elements that conveniently cover gaps each side towards the rear.

I particularly like the use of the four small spoilers parts that are mounted on top, giving the vehicle a more chunky, tank, type feel. 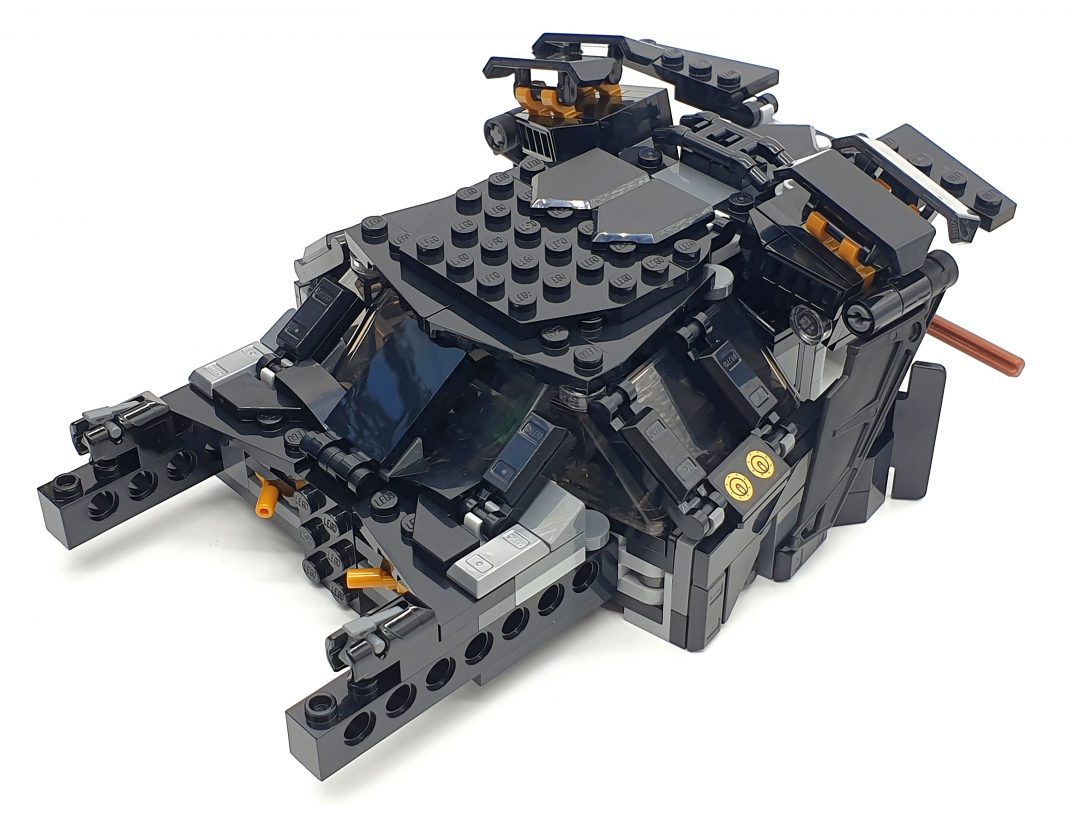 The final bag now, four, and thus completing the set.

This bag is almost all wheels and includes six in total, two small ones at the front and four chunky ones at the rear. You pop them on towards the end of the build, to stop the body rolling away from you when aaplying more bricks, sensible and obvious really 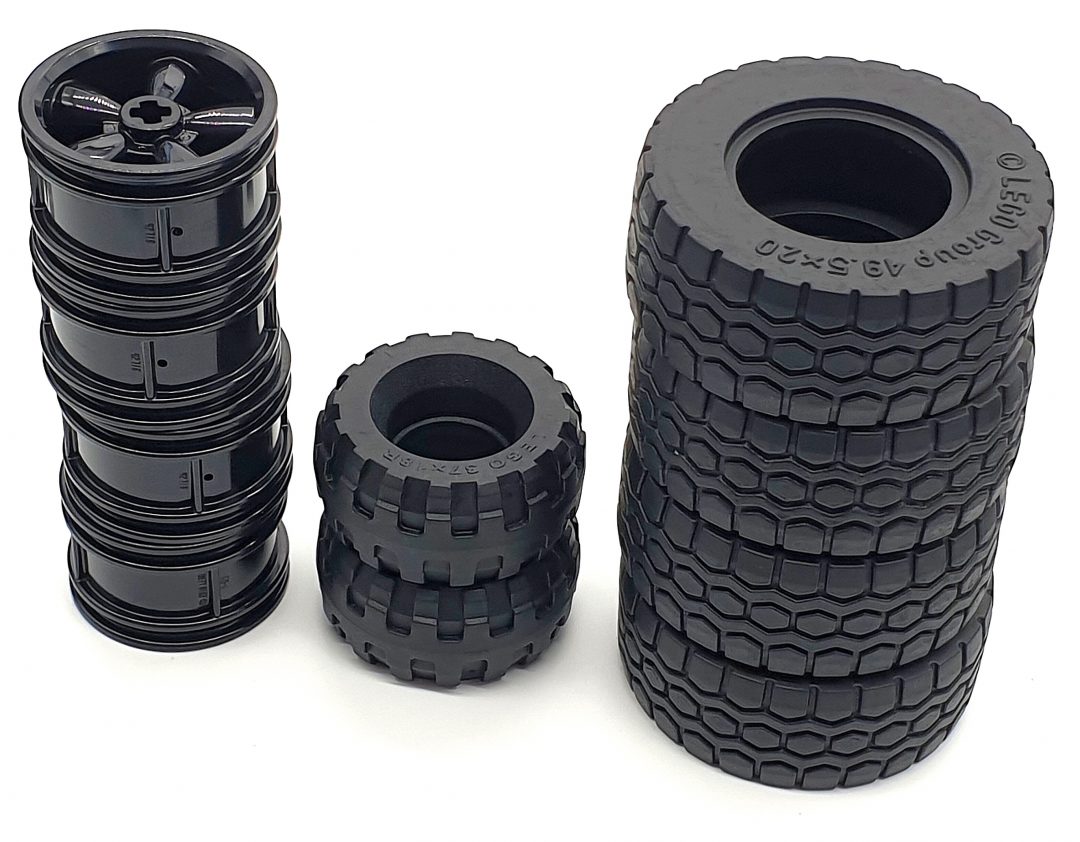 The finished set looks stunning and I love how LEGO designed it, from the lower, pointier front, the built up amour on the sides, and the wheels that mean business at the back, the whole thing looks incredible!

Applying each sticker was easy enough, with only ever being on stand pieces, not of this curved malarkey. Again prints would have been better but in a set of this size having stickers made sense, there were only seven after all. 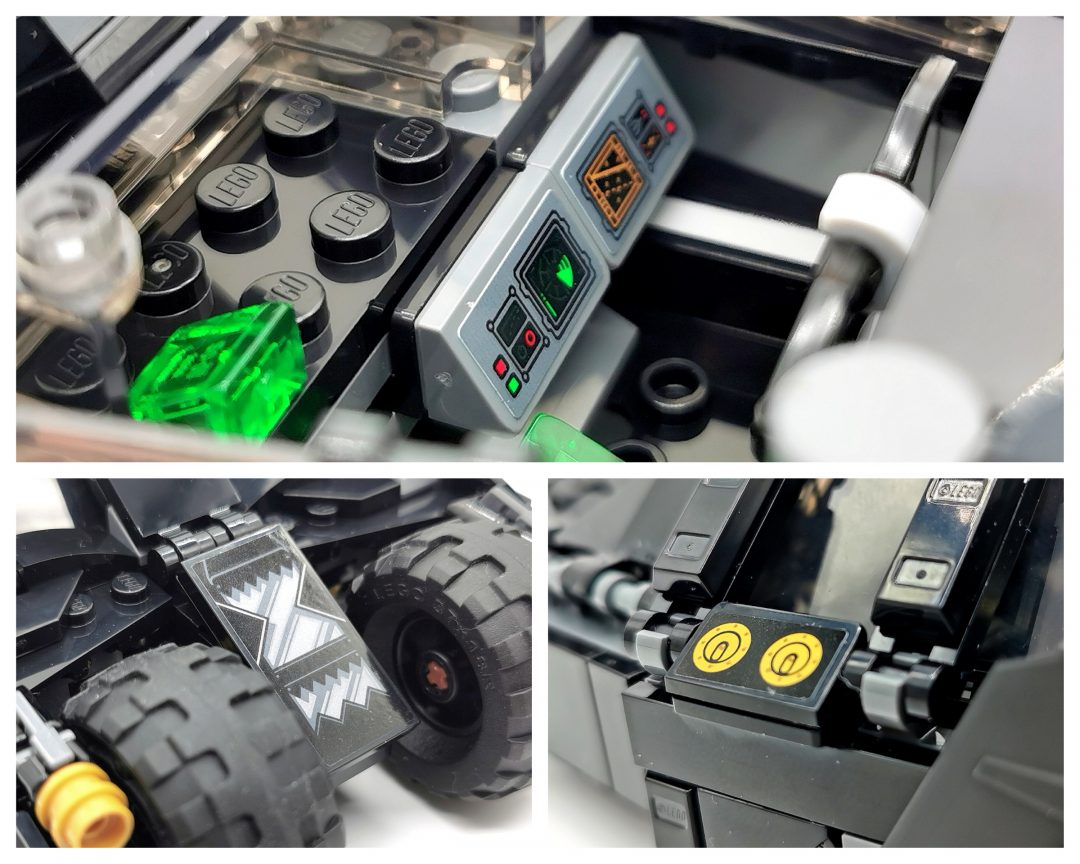 This thing looks amazing from all angles so displaying it will be easier than other LEGO sets. Sadly there isn’t a plinth for it like the previous LEGO ’66 Batmobile, which is a shame, to keep the consistency LEGO should have included a display stand with it. It would match the larger UCS style Tumbler also released this month. 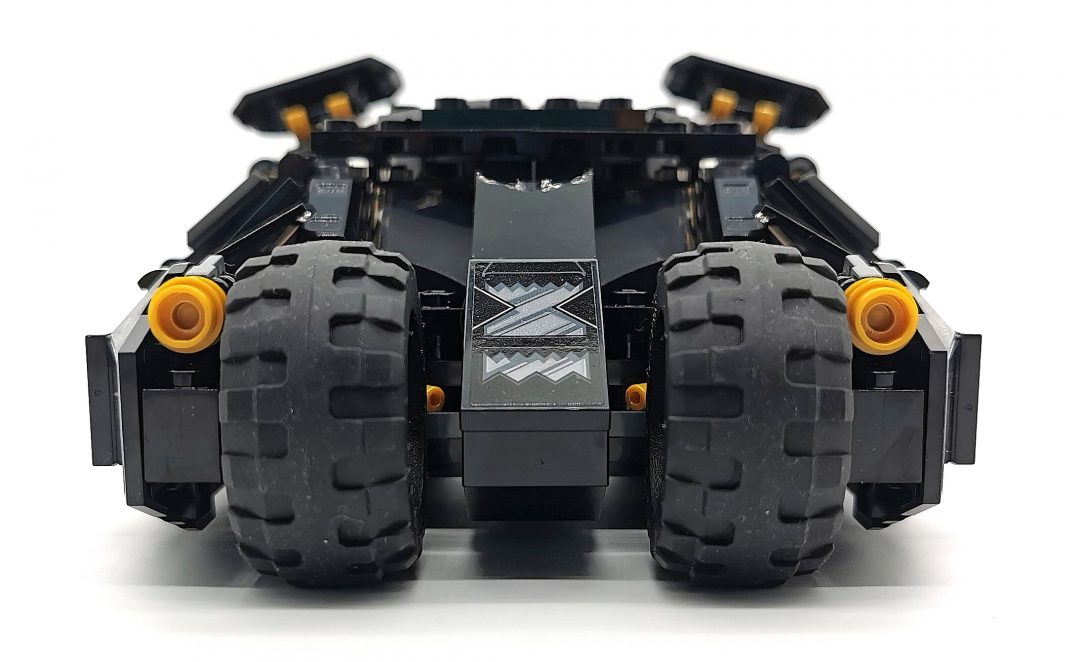 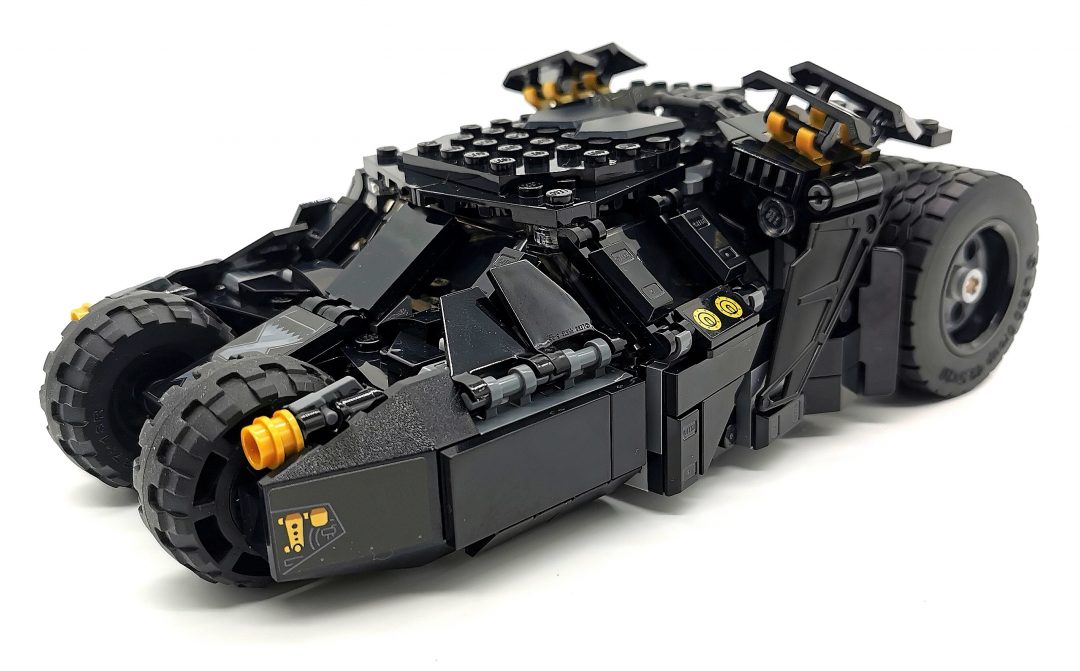 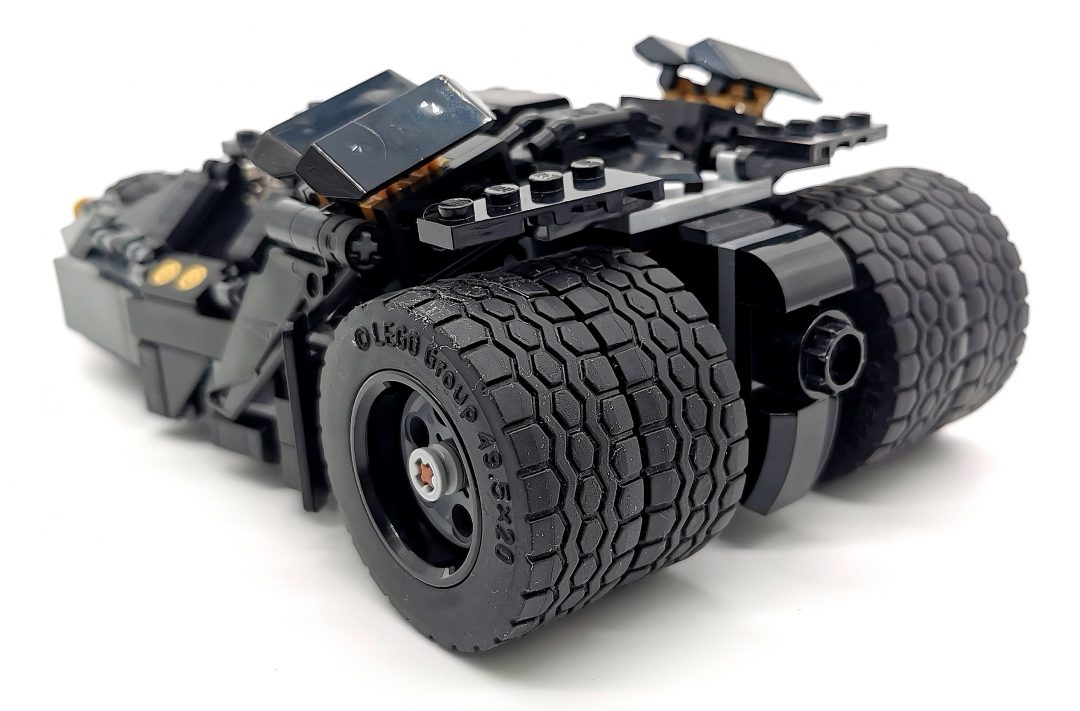 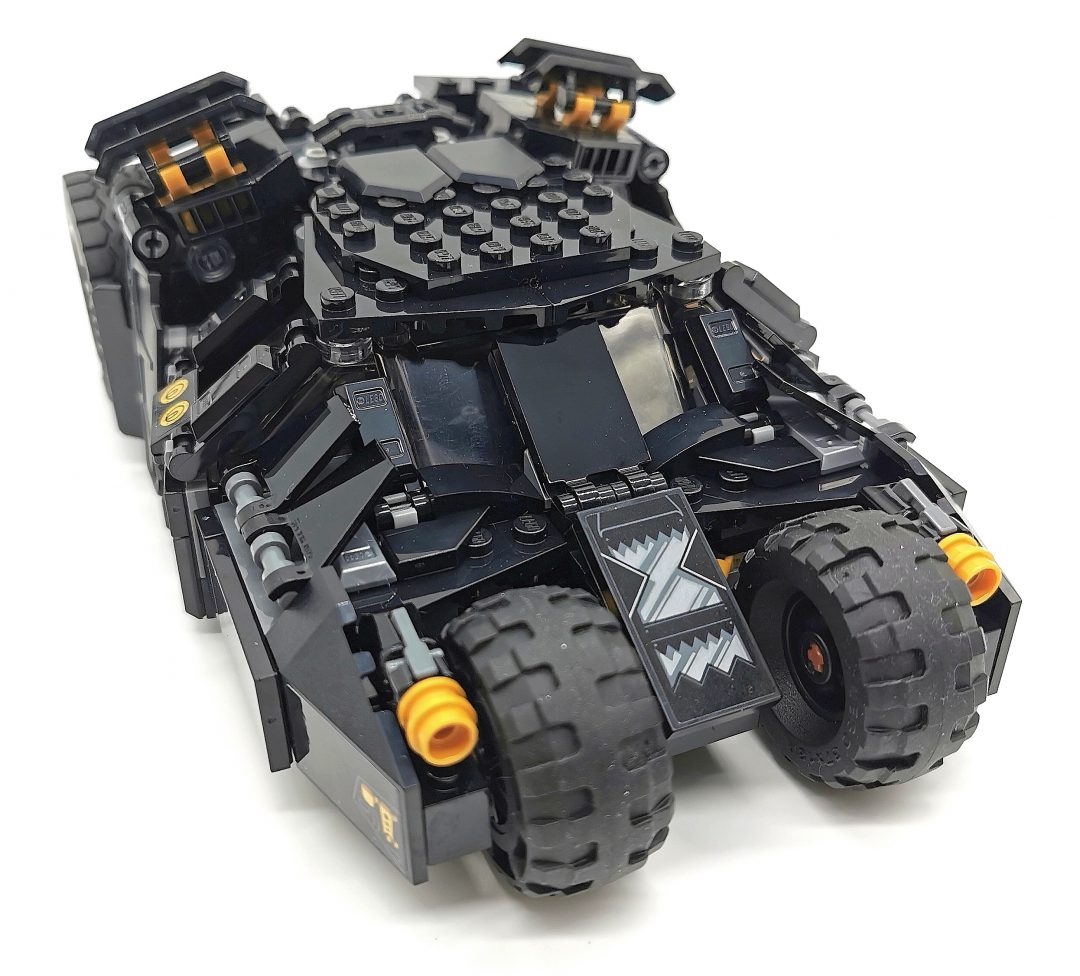 Included in the set are two Minifigures, Batman and Scarecrow!

Both Minifigures are set exclusives, which is great for collectors like me, we love an exclusive. They also both look quite impressive although Batman seems to be in his almost generic outfit.

This particular Batman Minifigure is from the same movie trilogy as the Tumbler, The Dark Knight, and does look decent with his cool design and printing.

LEGO have gone for a printed utility belt rather than the specially moilded one found if every other, standard, Batman Minifigures, perhaps they could of produced another fancier looking belt for this iteration, but in gold!? 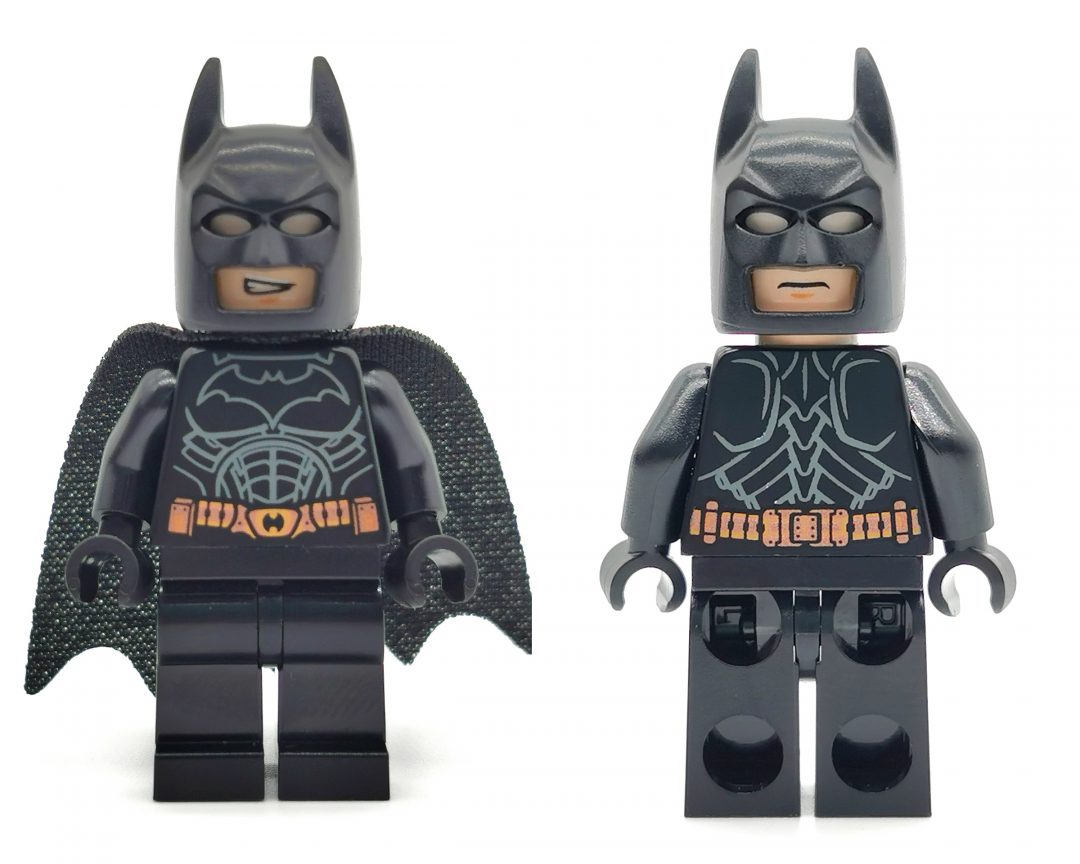 A cool feature about this Batman Minifigure is that he comes with an extra head, that when popped on changes him into Nightmare Batman, from Batman Begins. 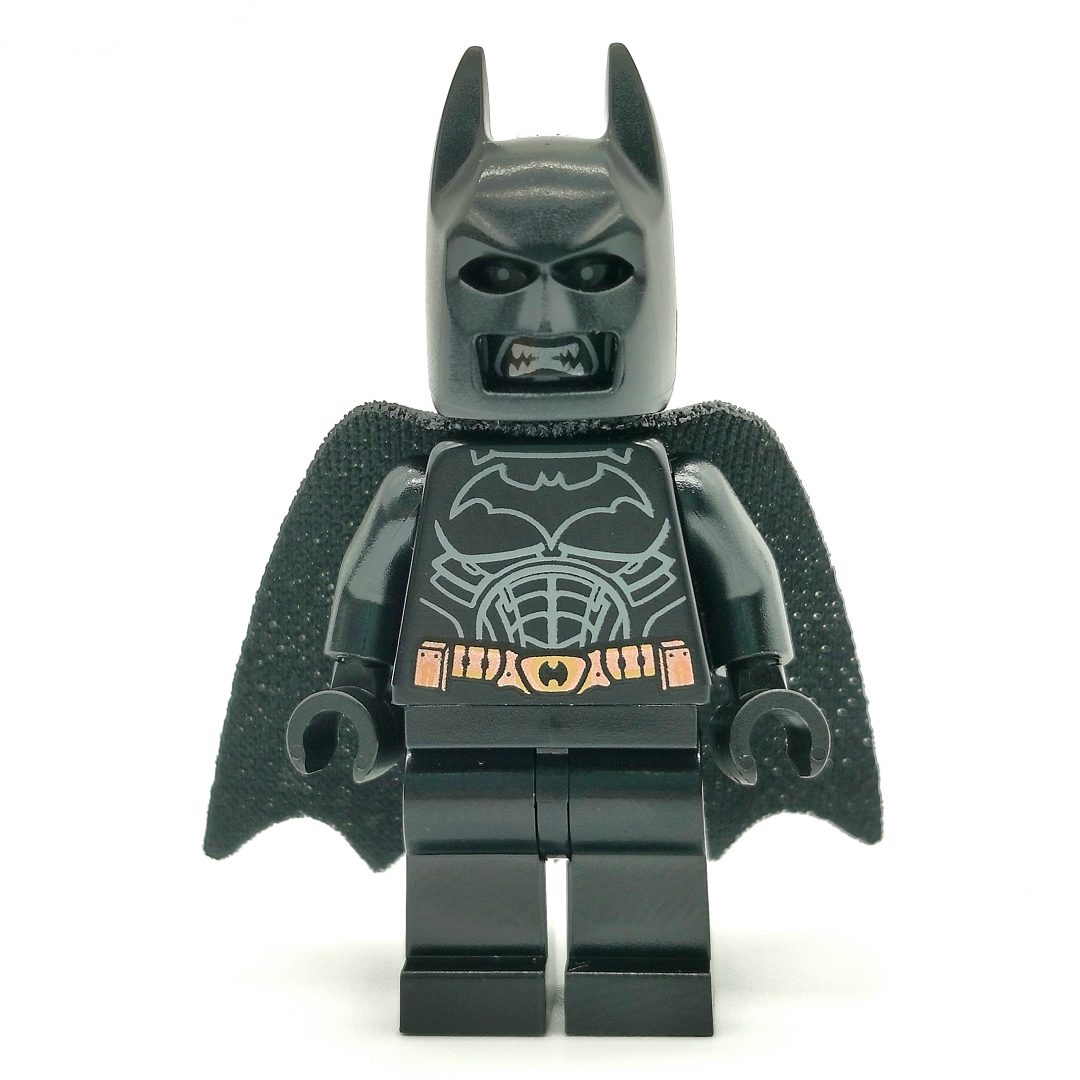 Scarecrow also looks the part and completely different to what we’ve seen in the part. He is still sporting a sack on his head but this time its merely printed on.

He is also looking somewhat dapper in his suit, but sadly the design doesn’t continue onto the legs which is a shame, legs print is always a nice touch.

The detail on the back of his head is, I would say, the most detailed part of the Minifigure, as you can see the overlapping hessian sack pieces, the buckles, and rips and tears. 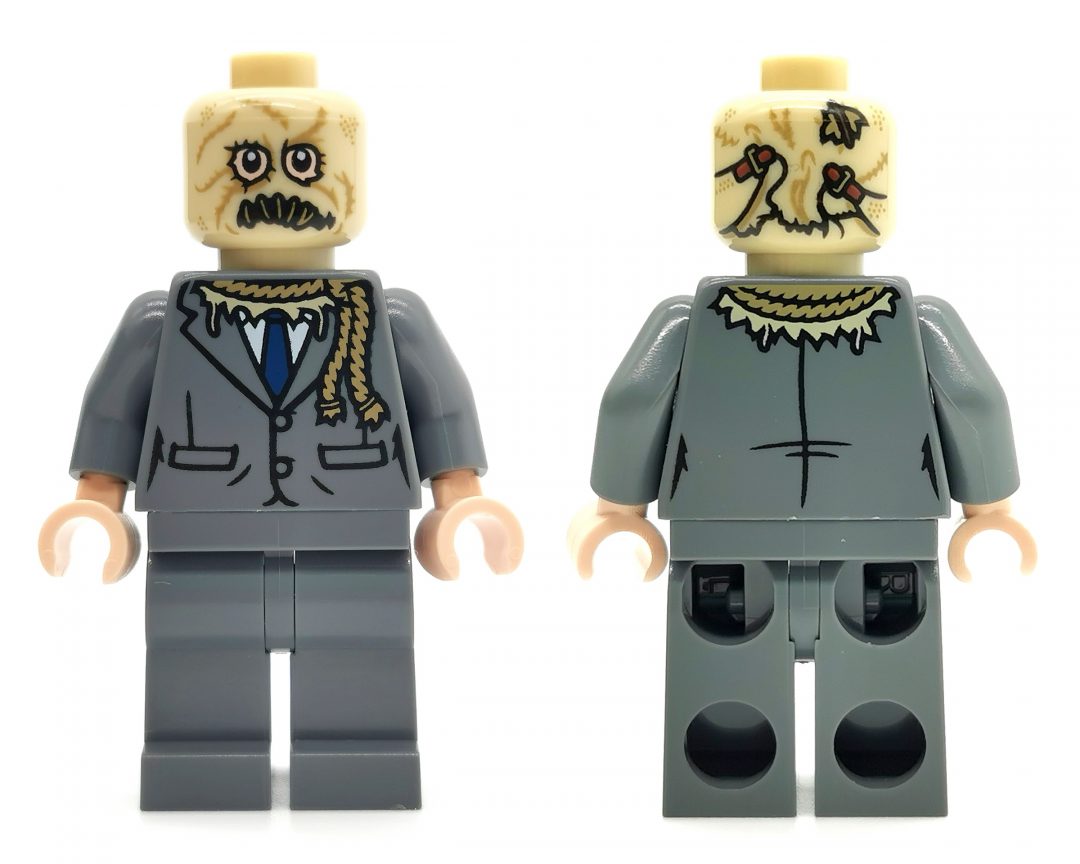 Each one comes with their own weapons, Batman with his Batarangs and Scarecrow with his poison gun.

Unfortunately the guns in this set are the notorious stud shooters, which I totally understand as it is of course a kids playset first and foremost. Batmat also comes with his trusty grappling hook gun which I must say makes for a better weapon/tool than any stud shooter gun does. 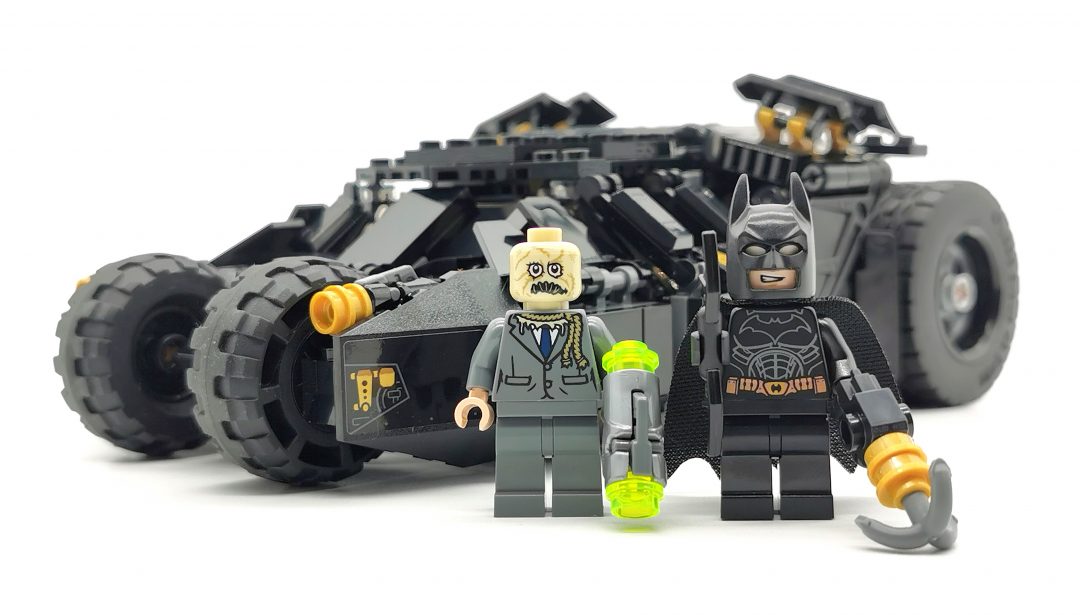 As small sets go this is brilliant and the price tag, £34.99, isn’t too shabby either.

The build is enjoyable and straightforward but has its fair share of new and tricky techniques. Including slopes and angles that really set the Tumbler off!

The Minifigures are awesome and are exclusive to the set, adding a different Batman into the mix is a nice departure from the generic ones of old. Scarecrow looks good and a welcomed addition to the collection.

All in all a nice playset that would make a cool gift for young and old fans alike.

Thank you for taking the time to read this review we truly appreciate it. Please stay tuned for more, next up is the LEGO Mini Disney Castle (40478), which we’ll be building live on our Instagram account soon! 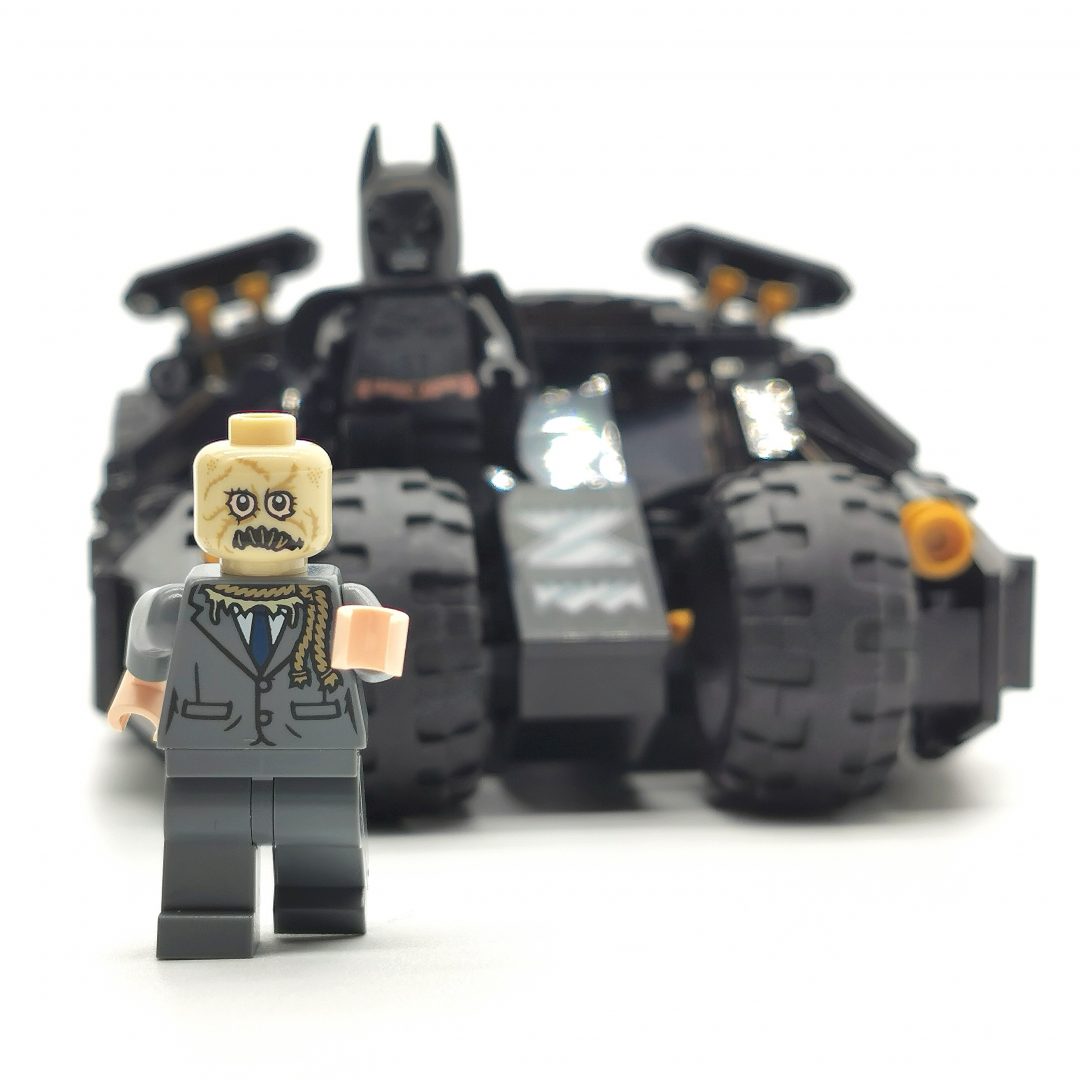 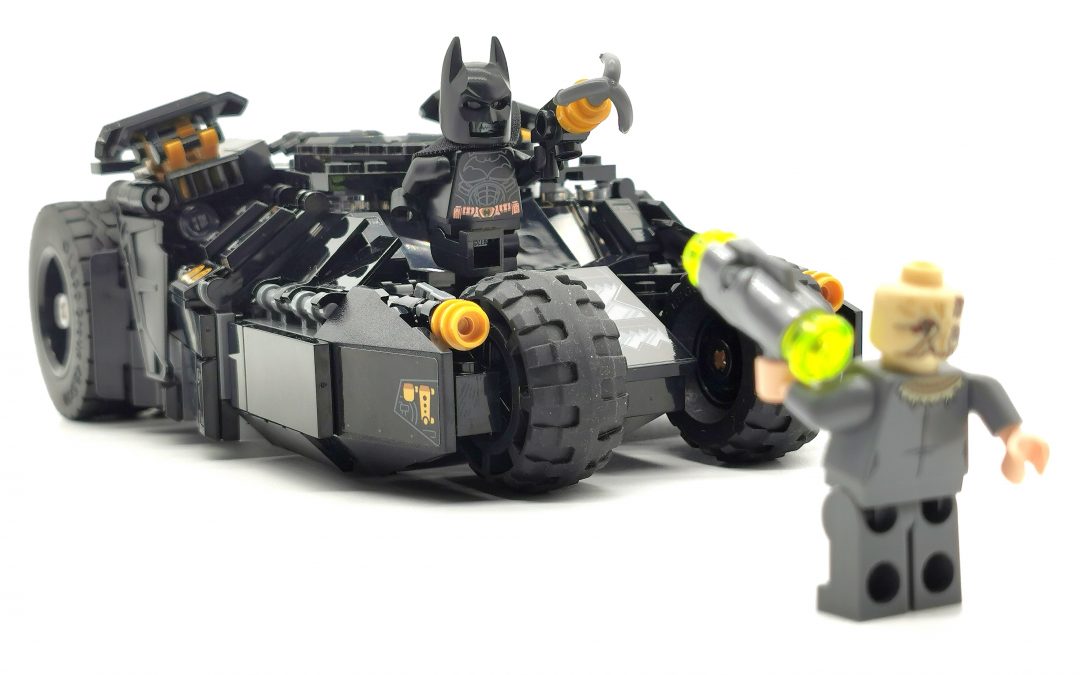 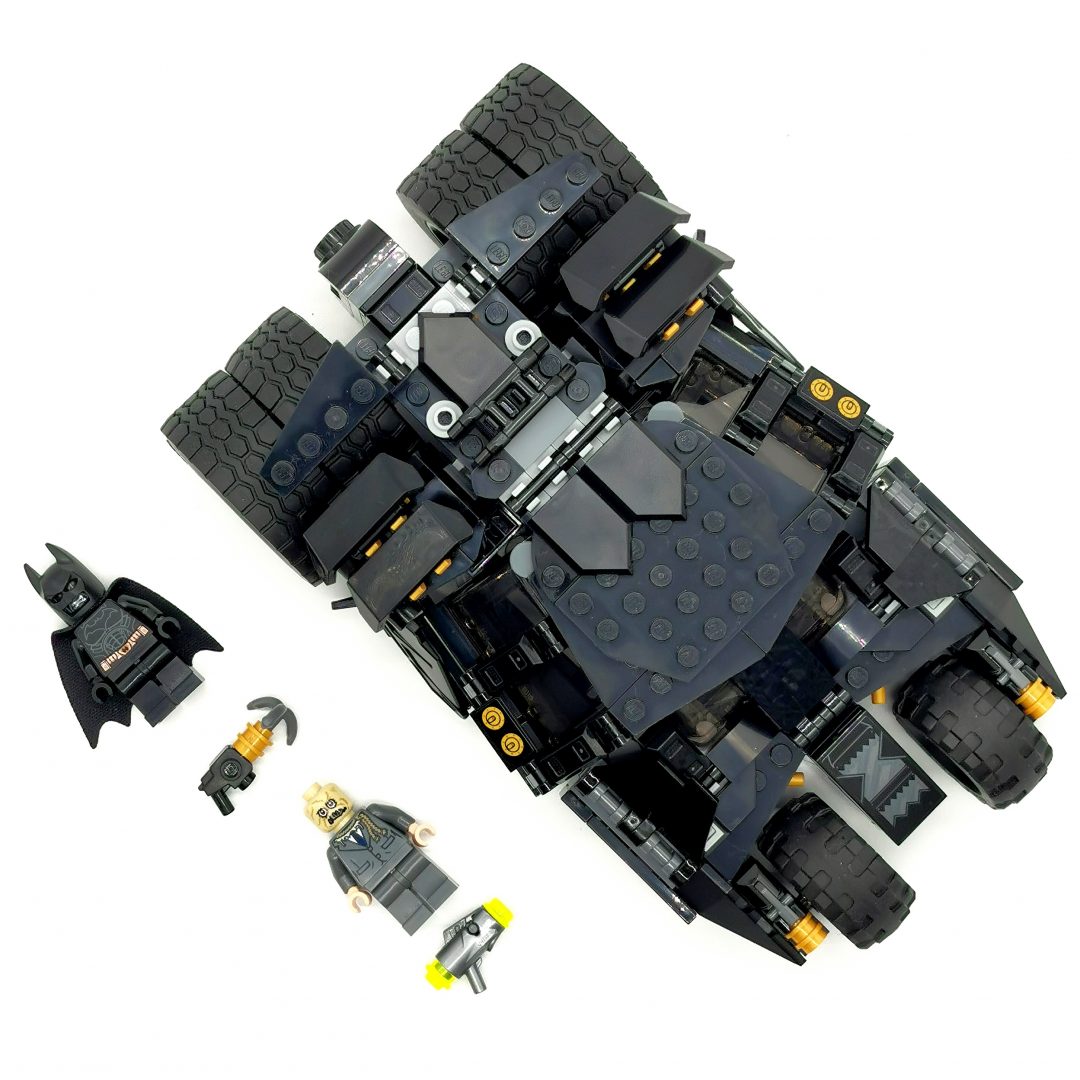 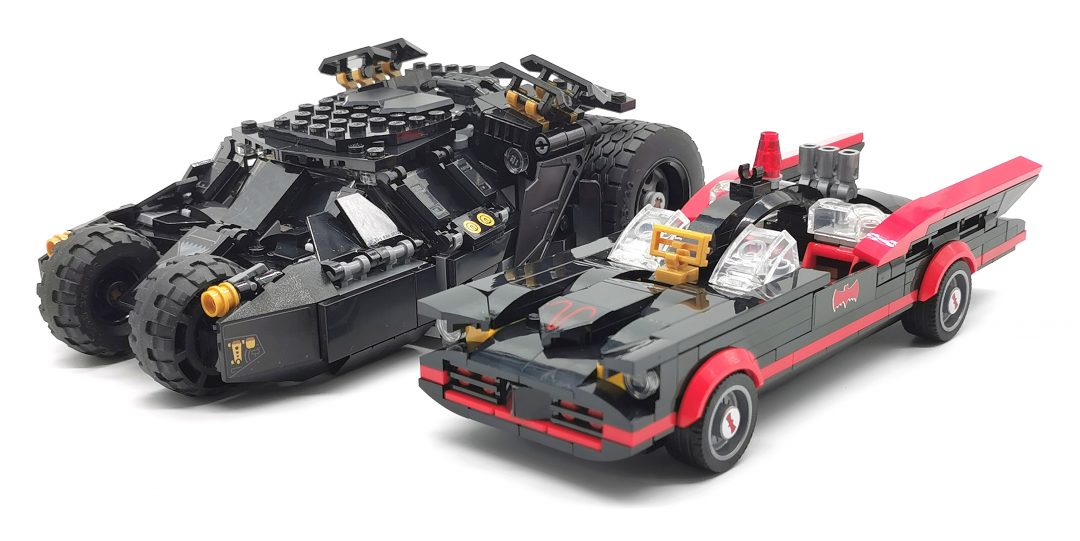 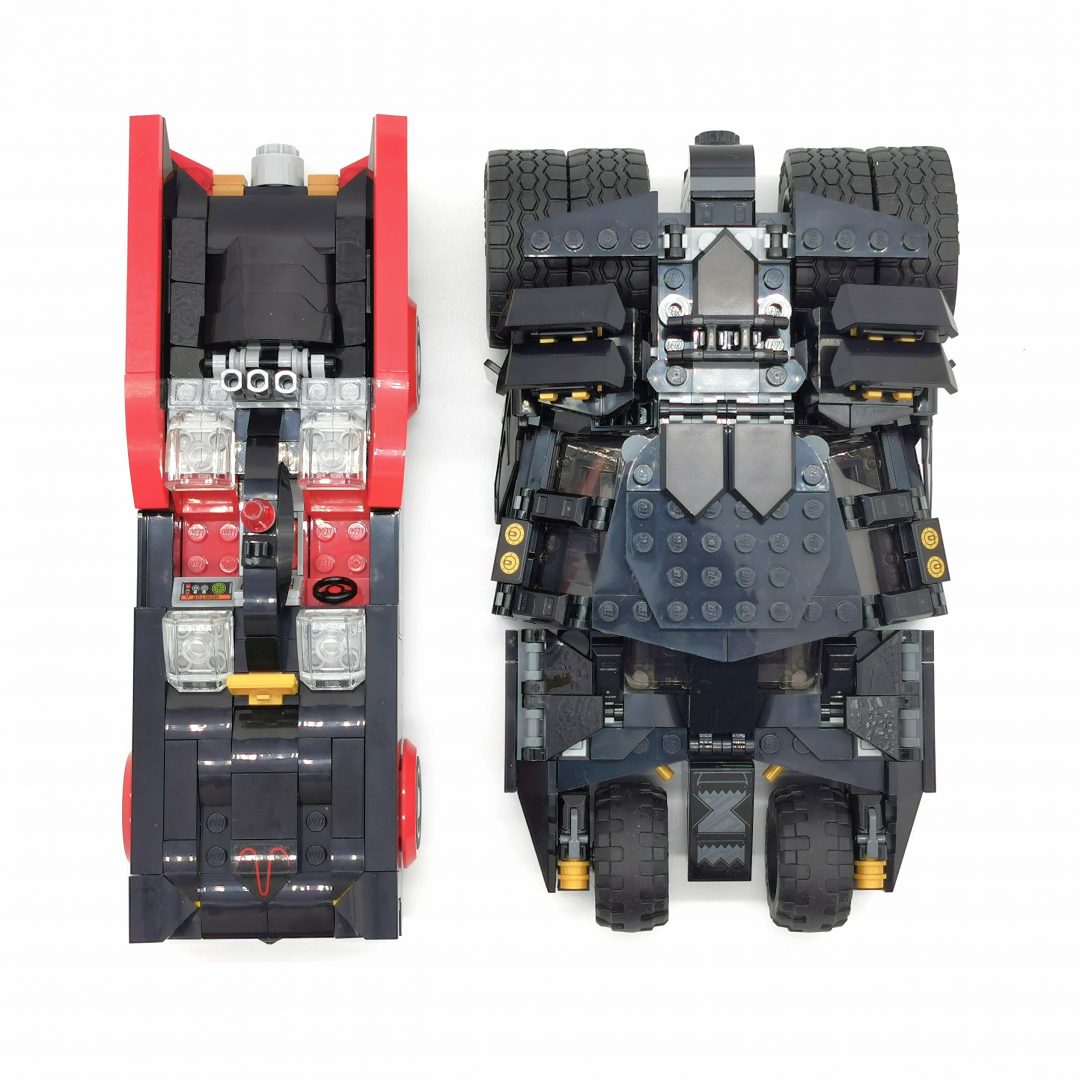 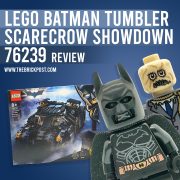 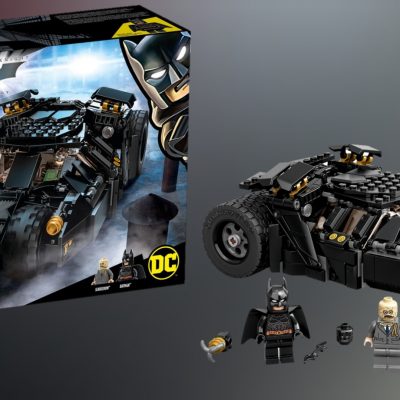