LEGO Hidden Side has always been an interesting theme, it mixes traditional City elements with the paranormal, which sounds like a great combination, and it is!

I have a few Hidden Side sets and Minifigures but tend not to go for the bigger ones as I have other larger sets to collect from other themes I like more. Which is kind of a shame as Hidden Side do have some good looking sets, notably the School Bus and the upcoming Haunted House.

As usual with LEGO’s most popular themes there is a Magazine to compliment it. The Hidden Side issue is a relatively new addition but it injects something new into the ever stale growing LEGO Magazines. 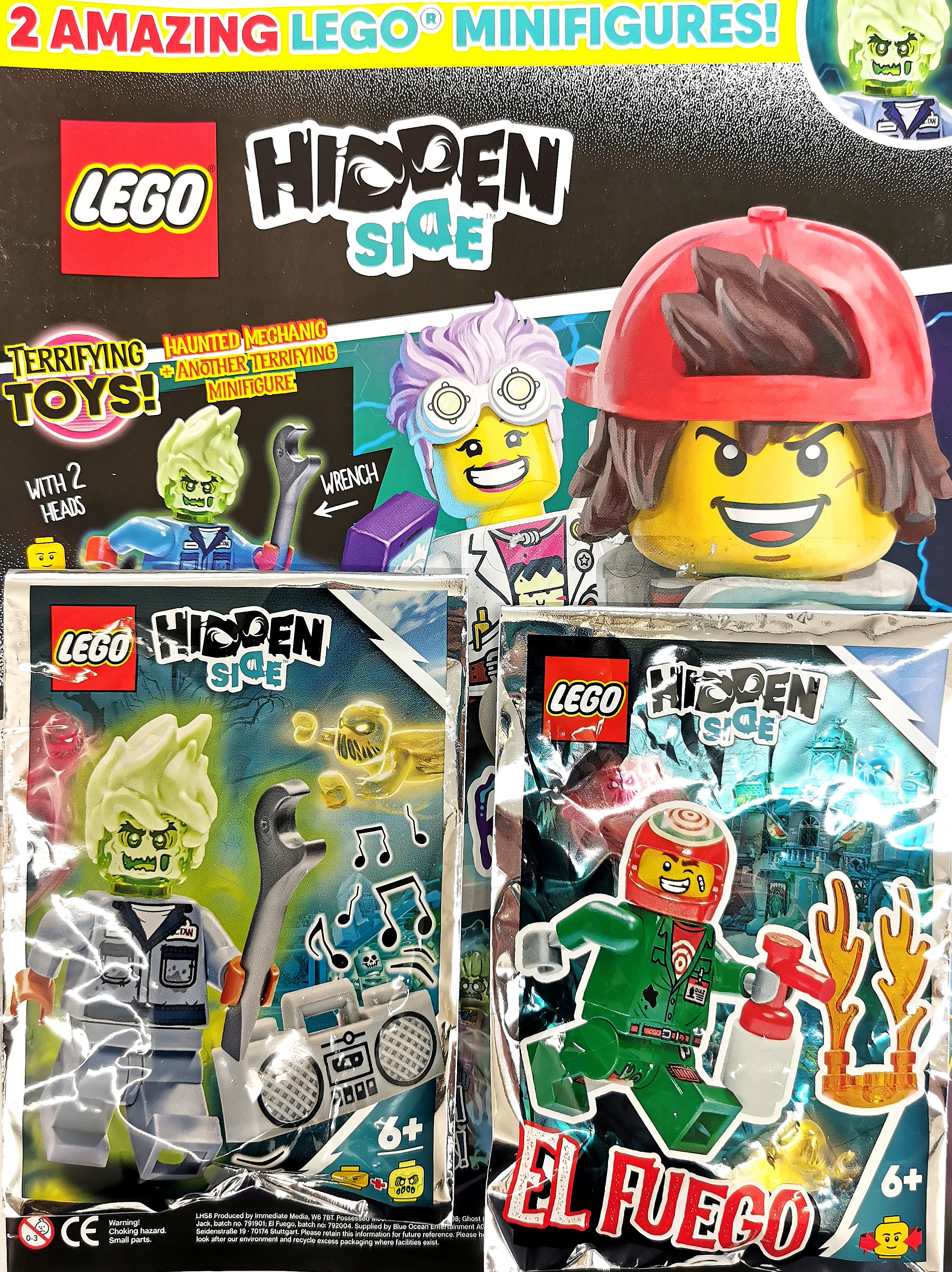 Don’t get me wrong the Star Wars, Batman, and Jurassic World issues are great, but they do repeat themselves quite a bit, oh look another generic Batman Minifigure!

Anyway, back to the Hidden Side Issue 8 review, first off let’s look at the Magazine itself.

As always we get the usual contents, several puzzles, which includes a Maze and Spot the Differences, the things you find in all of the LEGO Magazines. 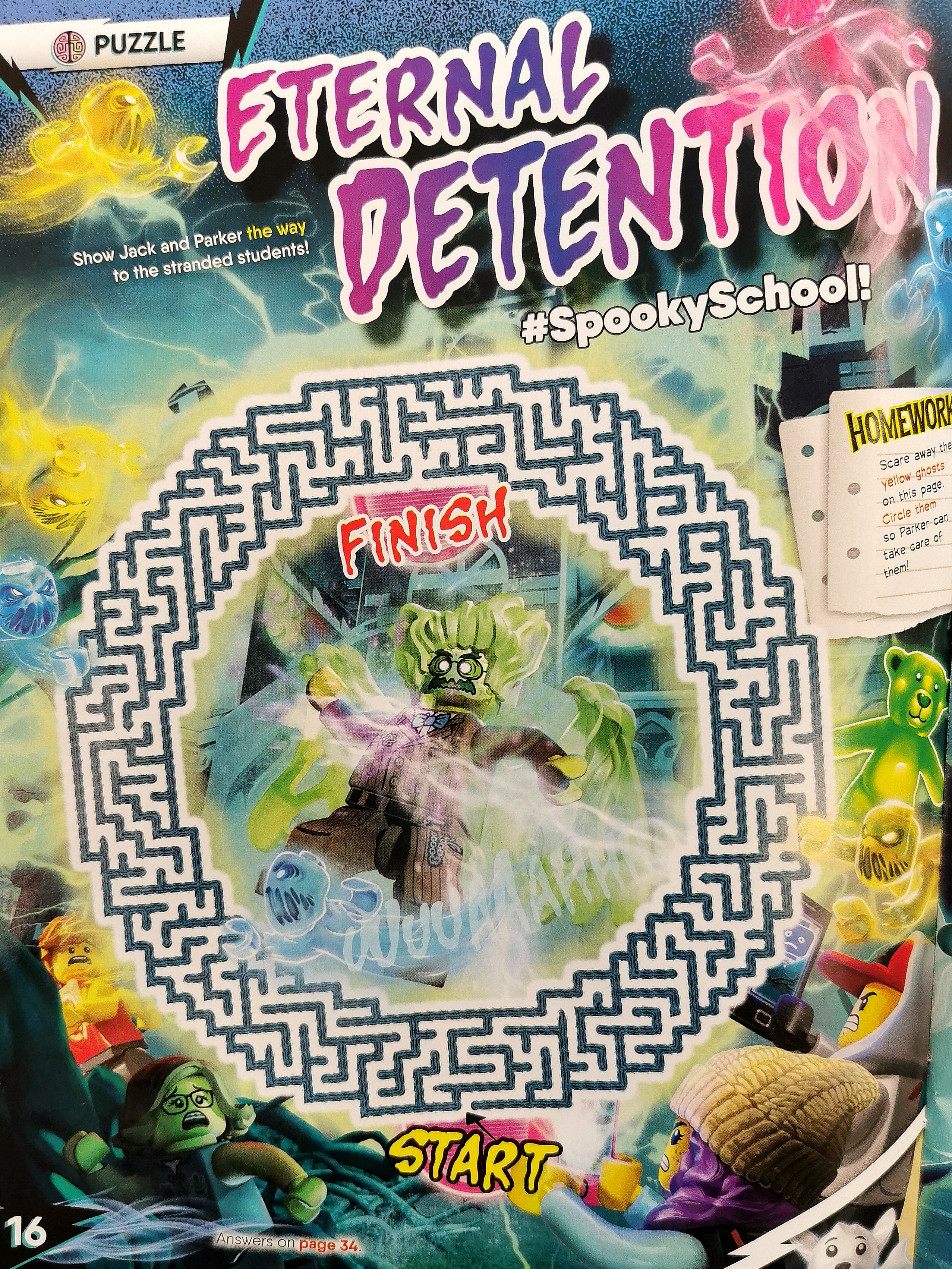 The poster, located at the very centre, is double sided and features El Fuego himself, in Skelton form. One of the Minifigures included with this issue is El Fuego in ‘living’ form, but more on him later! 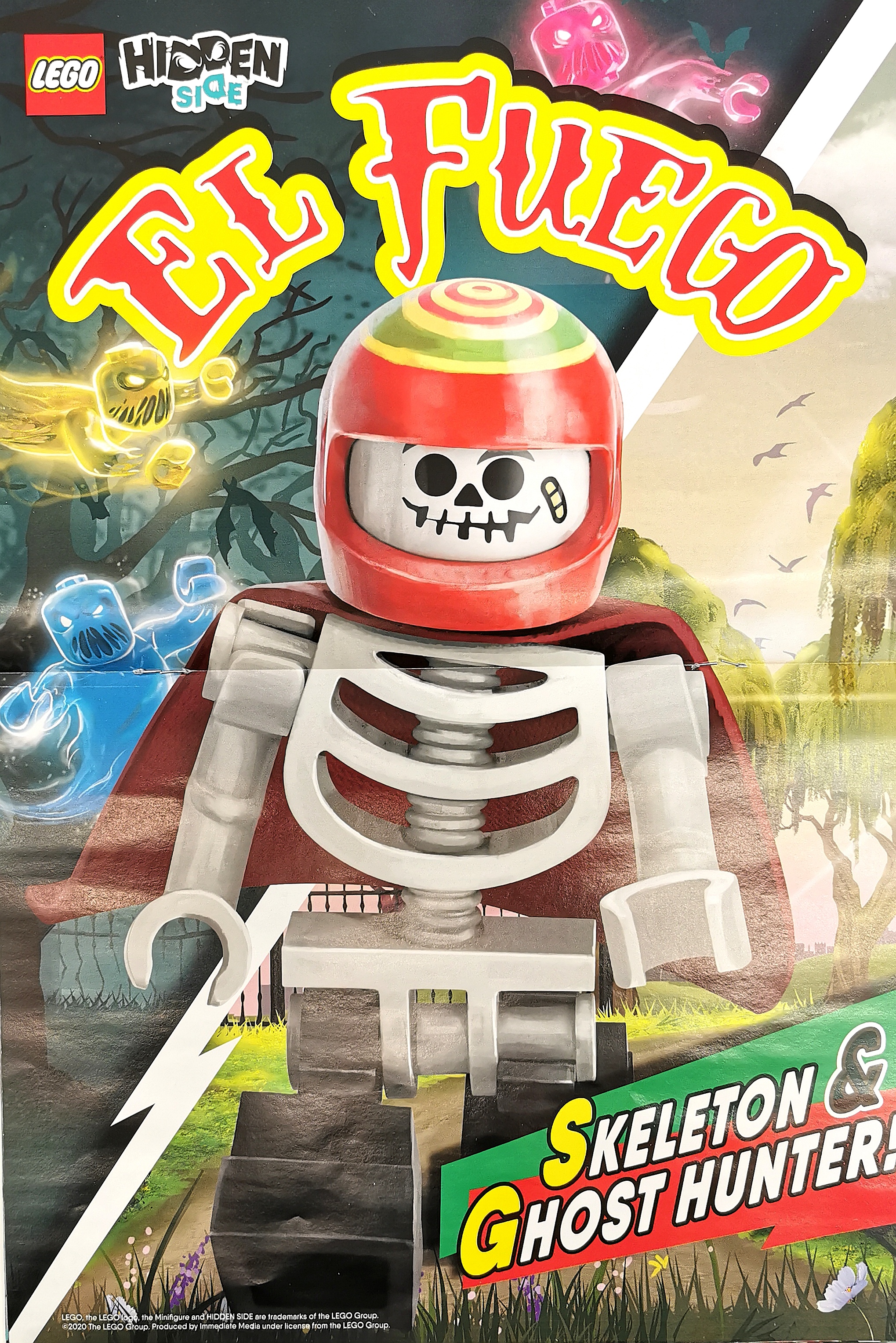 The two comics inside are also a good draw and a great read, either to your little LEGO fan or yourself! The first comic story features the Haunted Mechanic, which is the main freebie included with this issue. 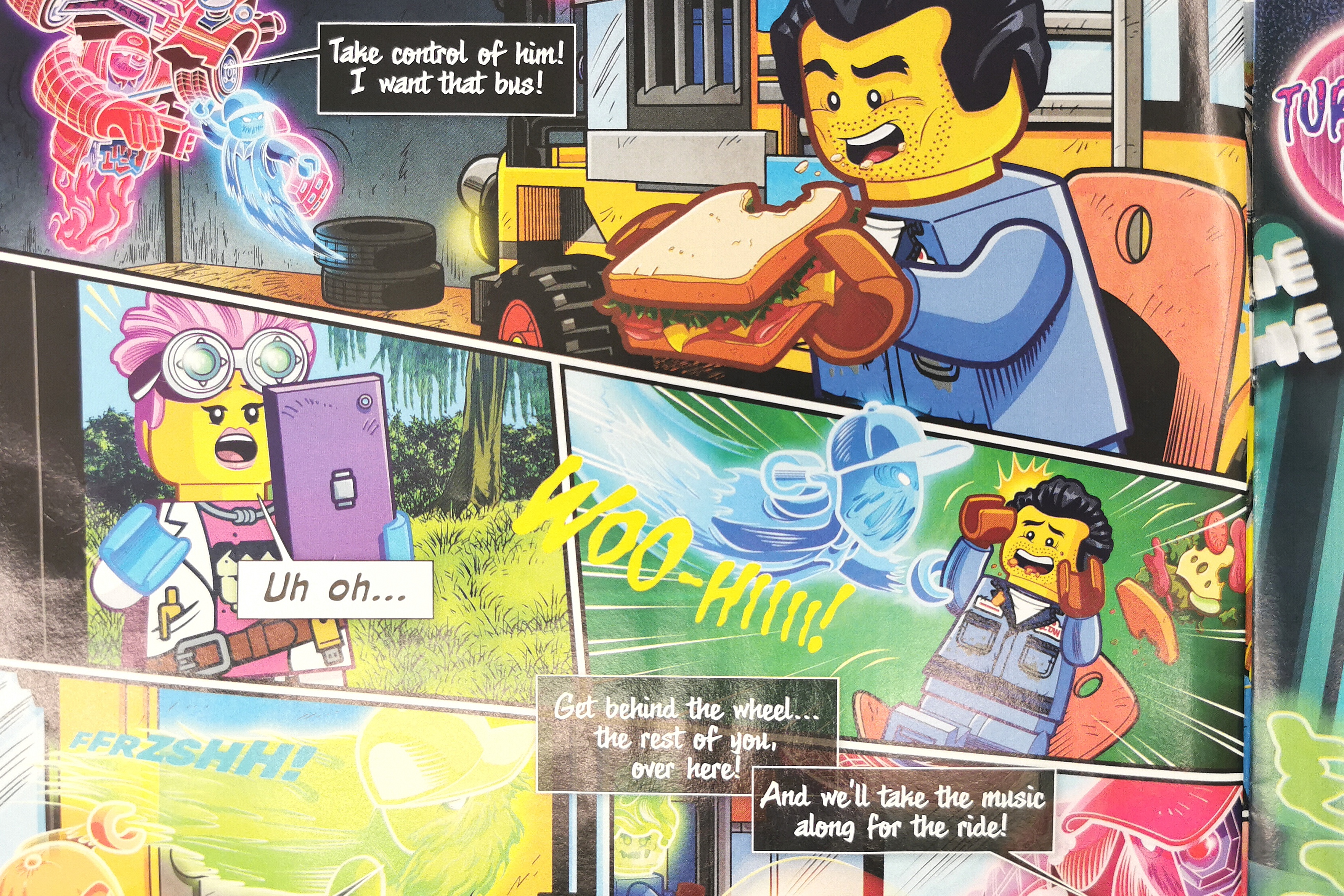 Onto the main feature now, and the only reason why us AFOLs purchase these magazines, the freebies! 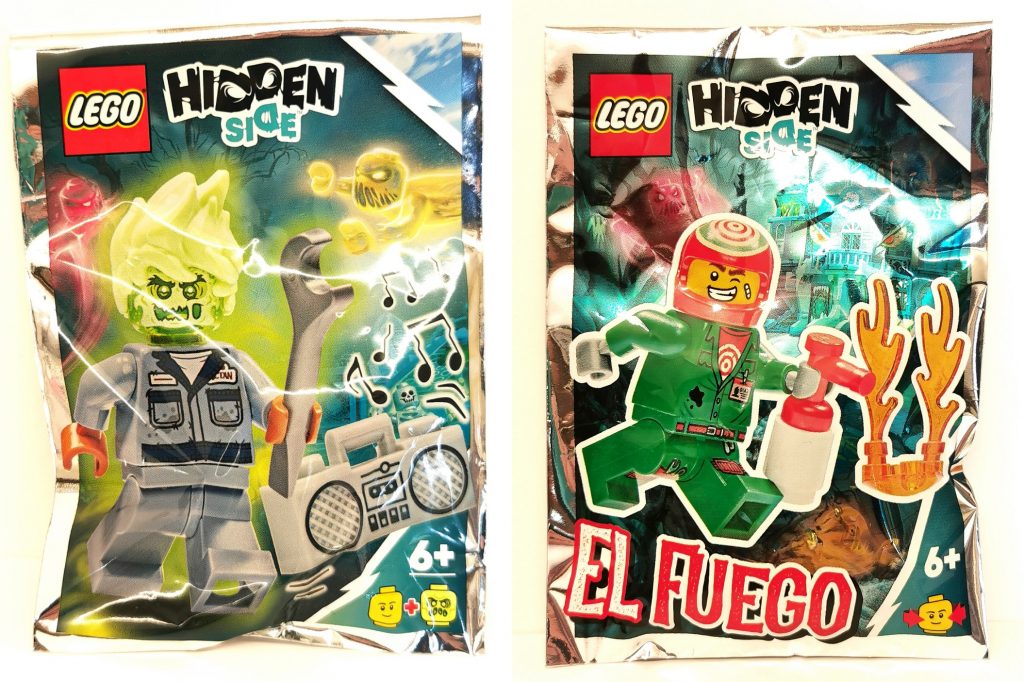 There are two freebies with Issue 8, the main one is the Haunted Mechanic, which comes with a very cool grey Boom box, wrench, and two heads! 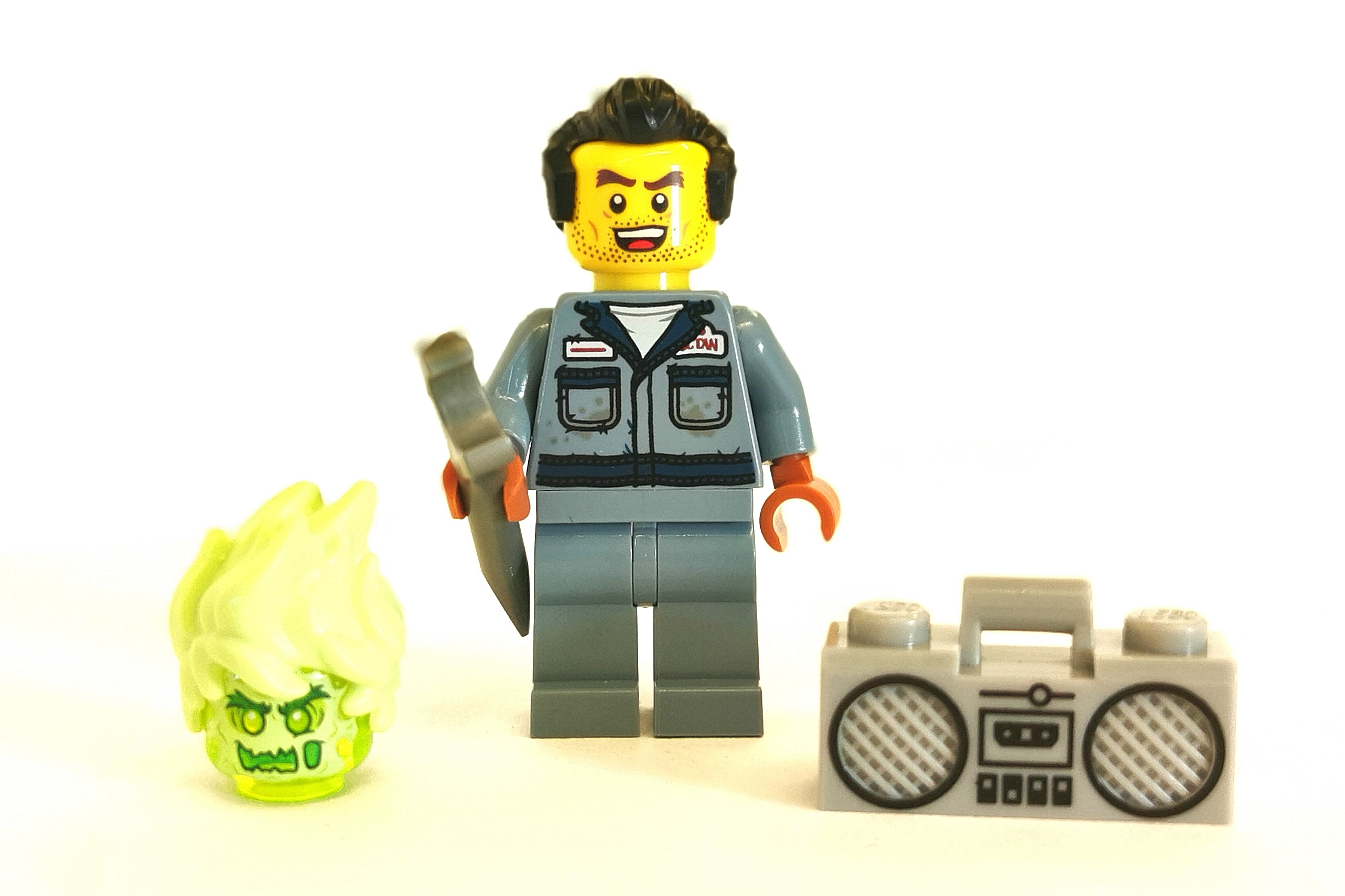 I personally really like this Minifigure, it can have so many uses other than being in Hidden Side. I want to put him to work in my City as the resident Mechanic. Including two heads is a great move by LEGO, although the Ghostly head & hair does have very limited uses outside of its intended theme.

He has an alternate face too, a less happy expression shall we say. 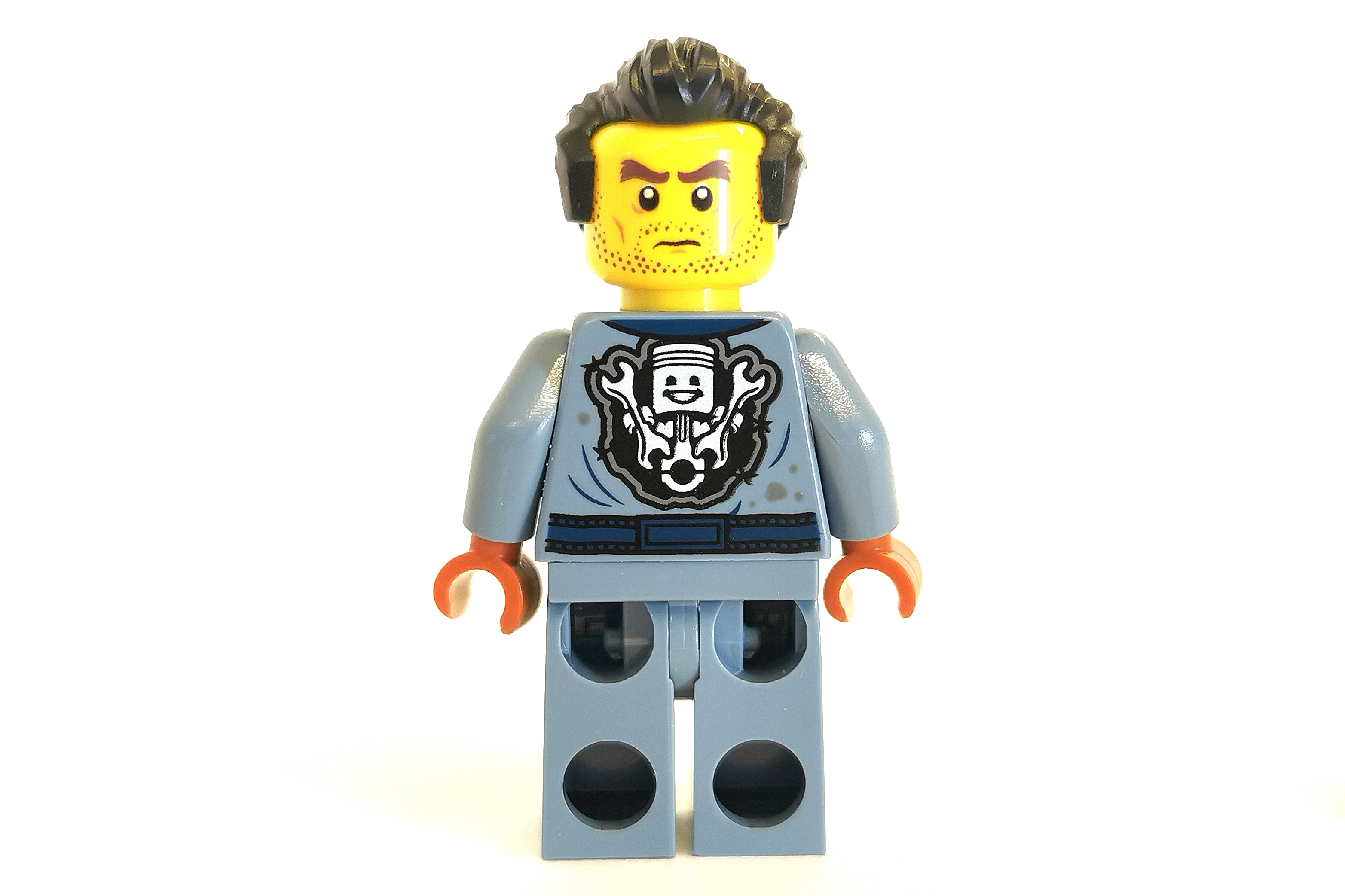 Alternate face and back printing

The back printing is awesome and great to have such a cool design. I’m glad LEGO didn’t add any Ghostly elements to it and left it generic, makes him fit into a Cityscape more easily.

The second freebie is El Fuego, before he’s presumably dead and a Skeleton. We’ve actually had him before as a freebie, issue 2 or 3 I recall. 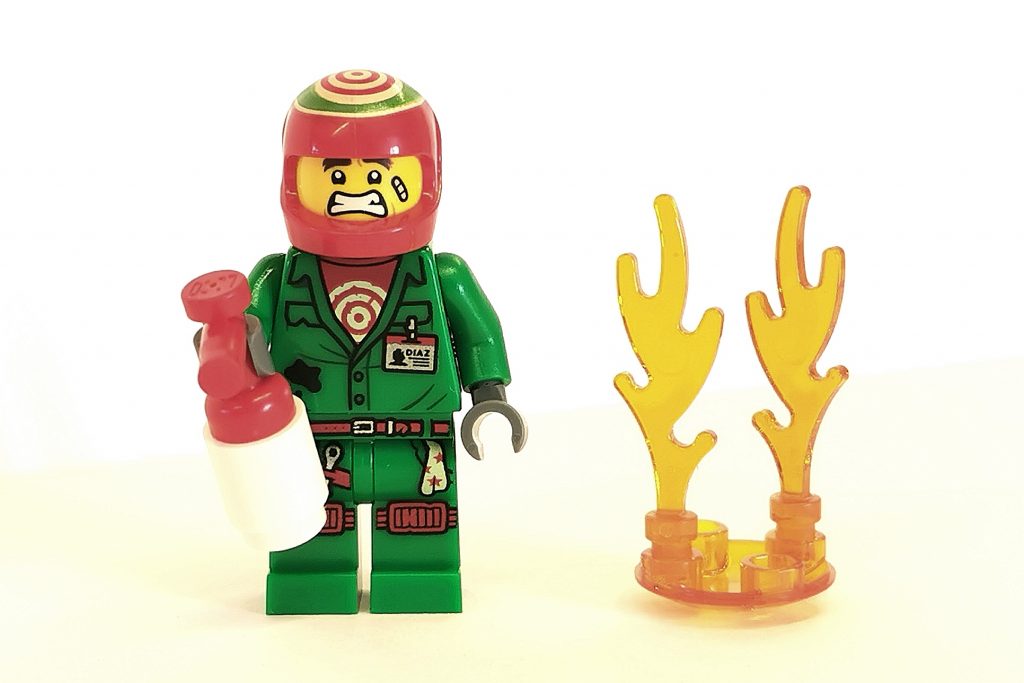 None the less another good Minifigure to have. He’s sporting a Green overall with knee pads, belt and other bits hanging out of his pockets.

He’s accompanied by an extinguisher and a small fire. He’saa professional Stunt man and seems to love fire, maybe that’s how he meets his end, a Stunt gone wrong! 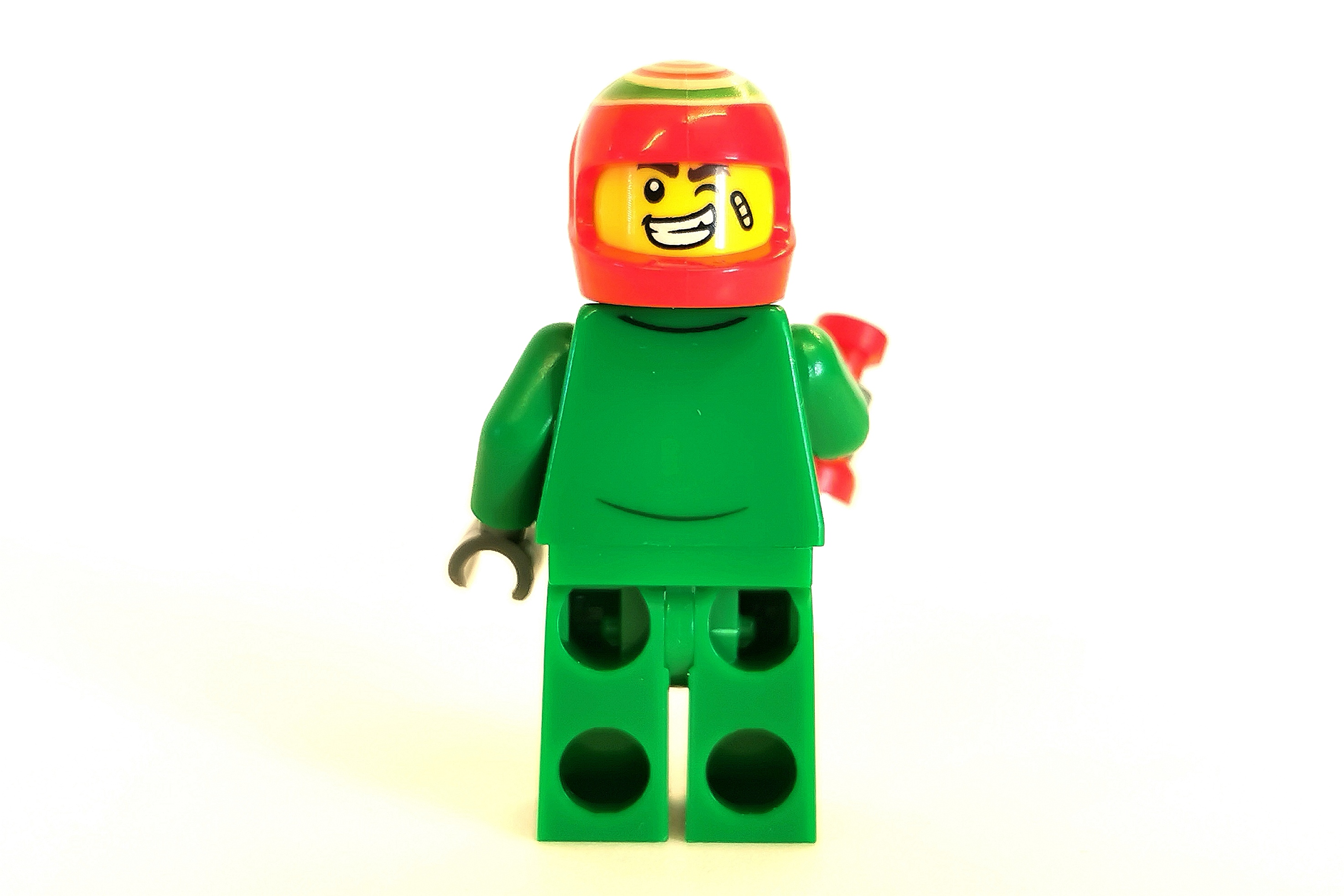 Alternate face and back printing

He too has an alternate face, which is a ‘cocky’ type expression. Both faces have a plaster on the left cheek, which is a great little detail, showing he’s gotten into some scrapes along the way.

For those of you that want to know, here’s a peek at next issues freebies: 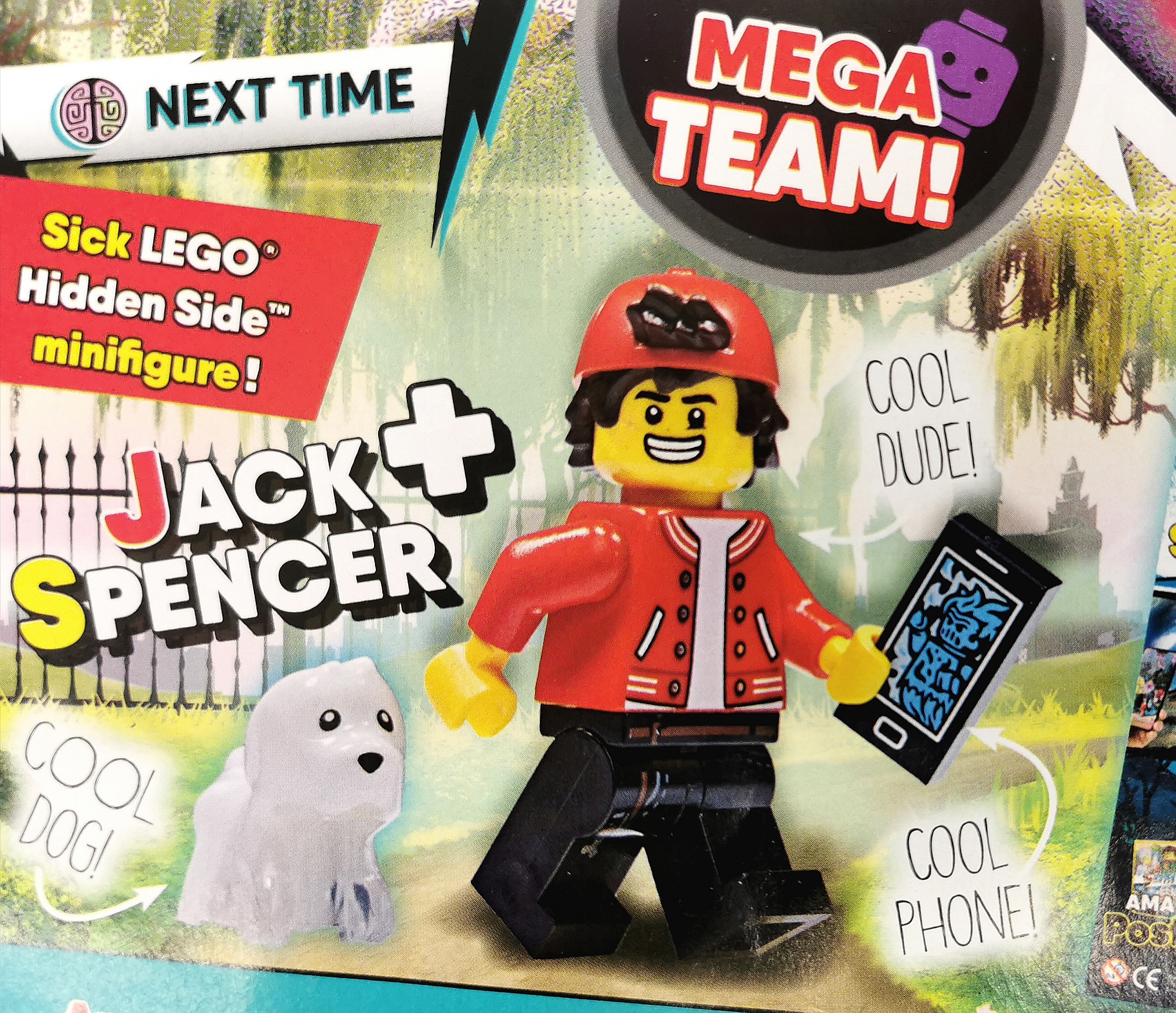 Do you collect the LEGO Magazines or do you stay clear of them? Let us know your thoughts in the comments below.

Thank you for taking the time to read this review, it’s truly appreciated! 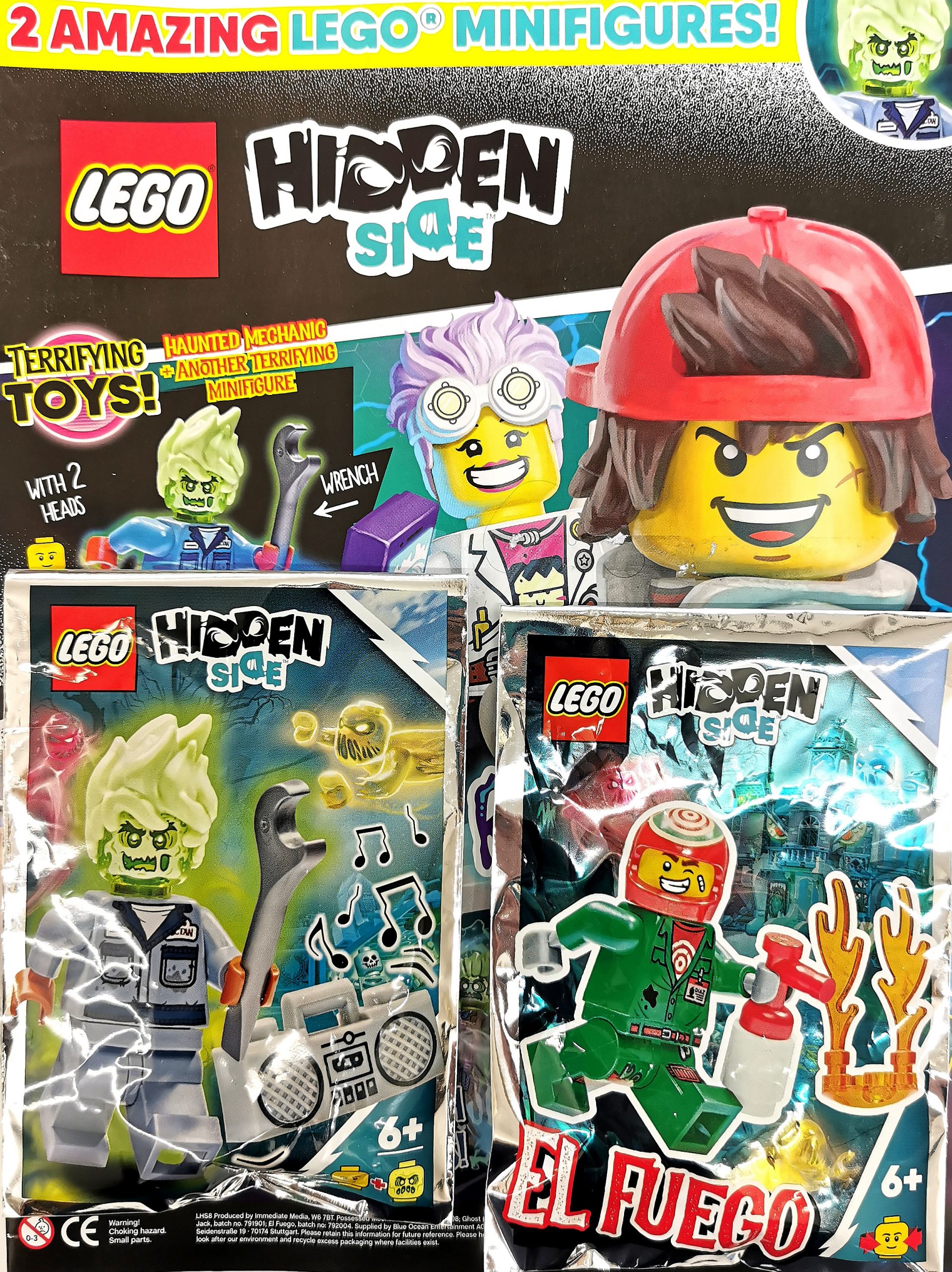 Overall two great additions to the Minifigure collection. Both have really clear and detailed printing. Their accessories suit them well, with the added new grey Boombox piece the Haunted Mechanic really is the standout Minifigure here! The magazine itself is OK, we're all pretty used what's inside by now and it's nothing different here. Still makes for a fun and entertaining read for younger fans. Definitely worth the RRP of £4.99. 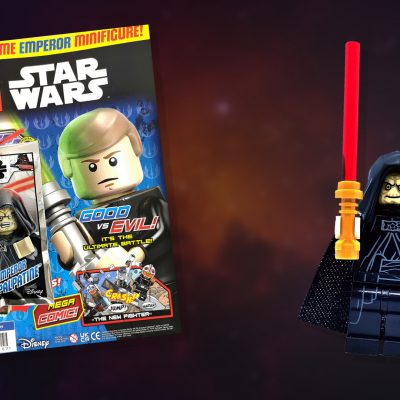 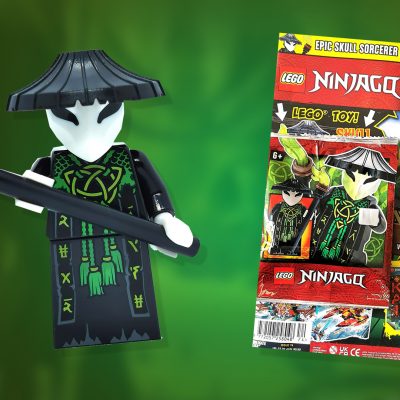