It has fast become a tradition in The Brick Post household to get and build the latest LEGO Winter Village Collection set each year. When we saw the official images of Holiday Main Street (10308) we weren’t that impressed by its two seemingly unfinished buildings.

It wasn’t until we popped into our local store and saw it in the plastic, that we fell for its charm. It may have been because of the display case it was in, surrounded by the previous years releases, Elf Clubhouse and Santa’s Sleigh.

The opened back buildings didn’t look so bad now and the team was presented in a way to show off all its features, even the Minifigures looked great positioned around the set.

As you may have worked out from the opening paragraphs, we love this set. Find out below just what goes into the build and a closer look at the interiors, street tram, stickers, and of course the Minifigures! 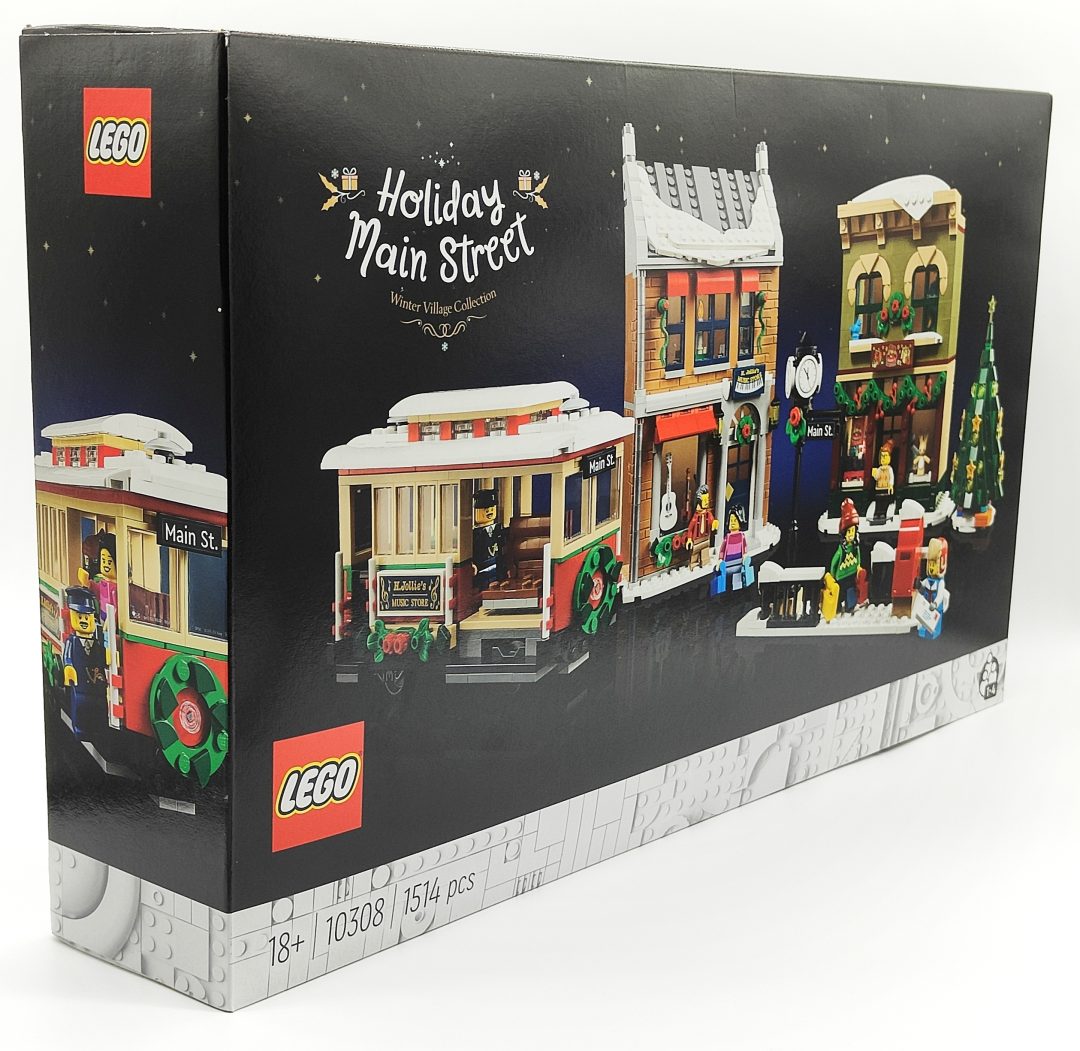 With its plain black background, white information banner and details, the box is your typical 18+ Adults Welcome design. This style really works well for the Winter Village Collection at it shows off the brightly coloured sets well, it also has a somewhat Christmassy feel to it with snowflakes drifting down.

Inside the box you’ll find 7 numbered bags, a small bit jam-packed sticker sheet, a loose plate, and a curious cardboard envelope. I’ve never encountered an envelope inside the box, so it was a nice experience opening one up to find the 4 instruction manuals inside, all flat and uncreased (although looking at the photo below they’re are a tad wavey). 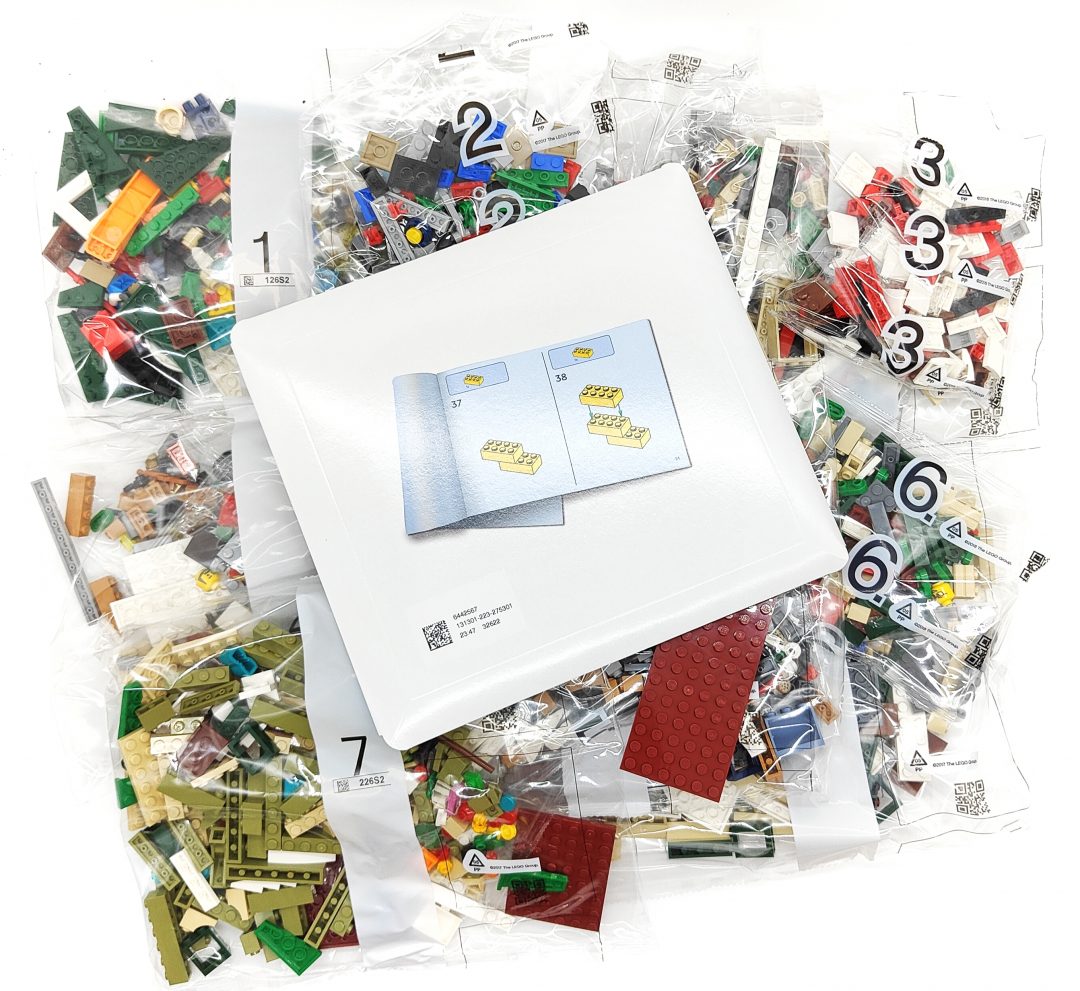 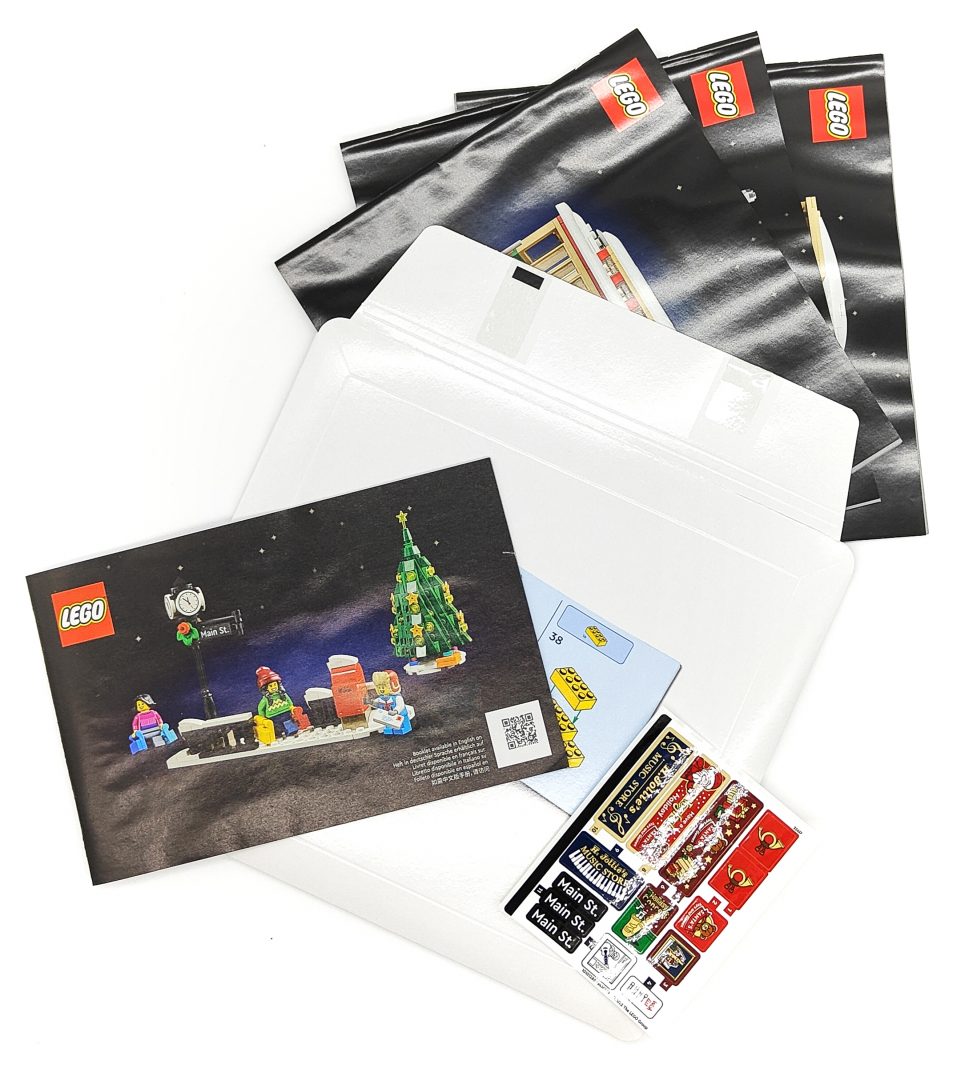 The stickers are some of the best I’ve seen, the designs are fun and really capture the essence of Christmas. The store signs and advertising panels are my favourites with their made-up business names and logos. You’ll even notice a callback to a set from a couple of years ago, the Ginger Bread House. This sticker hangs happily on a wall above the Music Shop, more on that later in the review. 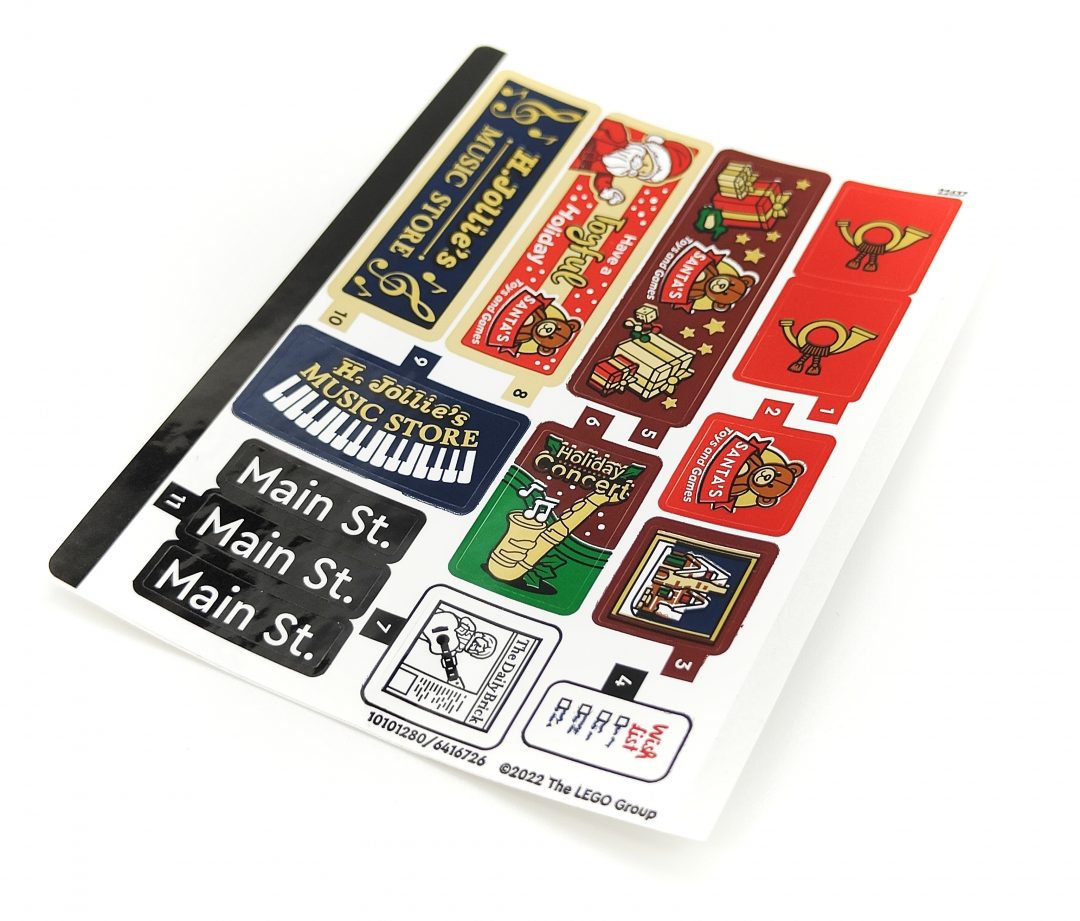 The first bag starts you off building what I consider to the a side build, a small section of snow with a lamp-post, fencing, and a little red letterbox. That’s not to say it’s a shoddy build or lacks in anyway, far from it, as with this build and last years (Santa’s Visit) it’s becoming the norm to get a snowy verge included. 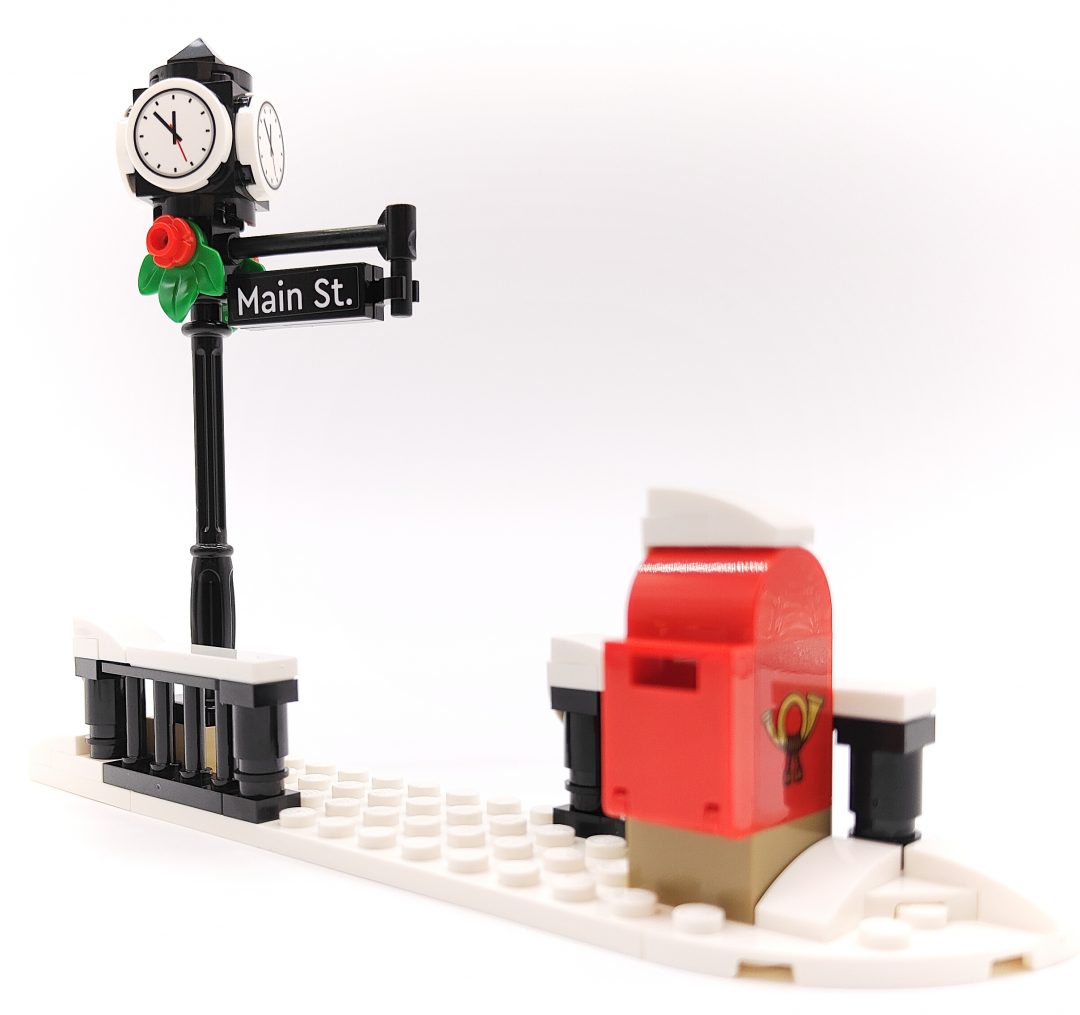 The Street Tram is next inline to be built and to most fans it’s the main attraction of the set. There hasn’t been a brick-built Tram for quite some time so when the official images dropped fans went nuts for it. I personally think that the buildings are on par with the Tram and add just as much to the set if not more, anyway we’ll get to the buildings in due course. 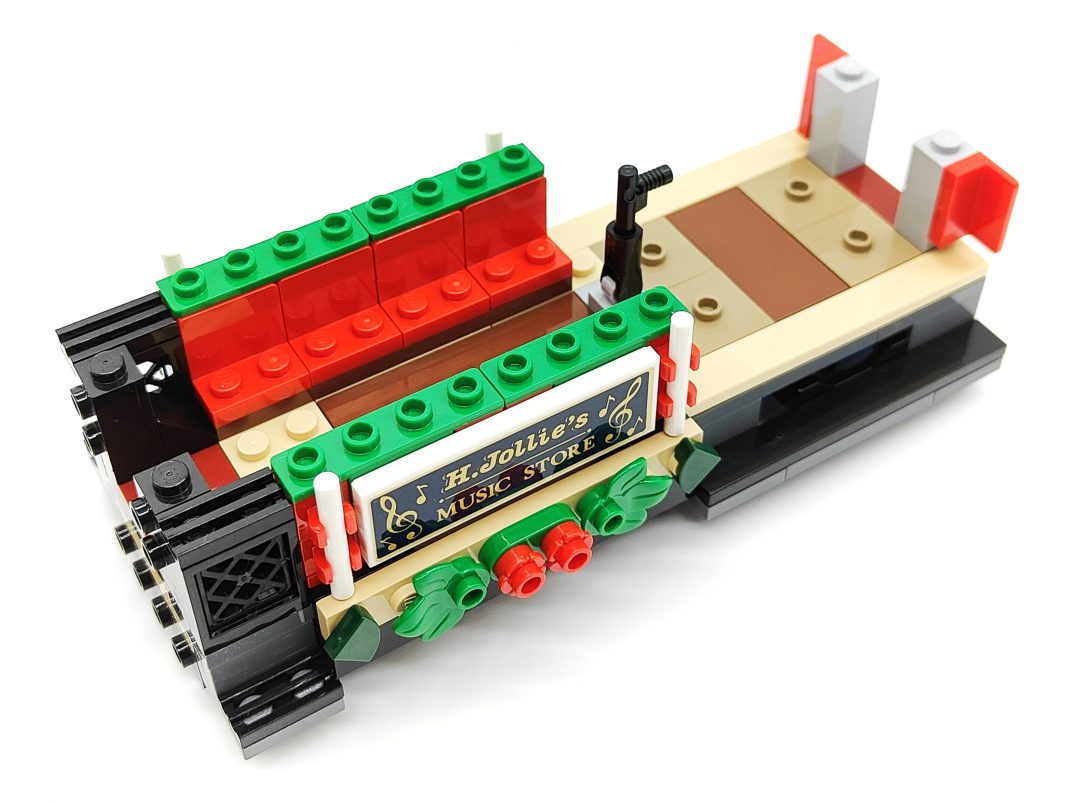 The Street Tram looks very much like a traditional tram would, especially if you base your view of them from Christmas movies from yesteryear. The front features a slightly curvaceous lower half where a wreath hangs. Along the sides you’ll see yet more foliage and advertisement banners either side, both showing different businesses, in fact they’re taken from the two buildings that are included, Music Shop & Toy Shop. 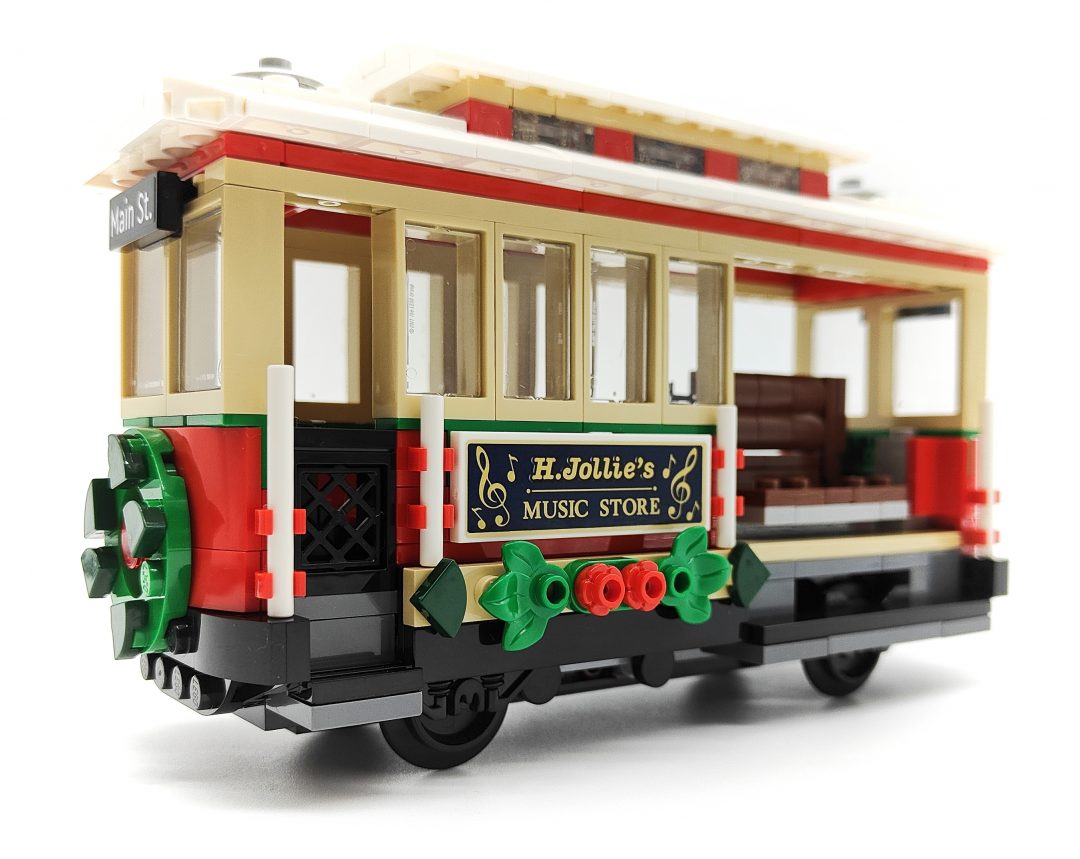 Inside the Tram there is a small but rather cool centre bench, I particularly liked the way this was built even though it was only a handful of bricks & pieces.

If you’re looking for a real-life counterpart then we’d say it’s most similar to a San Francisco Cable Car, I think you’ll agree the resemblance is there in many ways. Thanks to Dave (@thebricksnapper) for pointing us in the right direction. 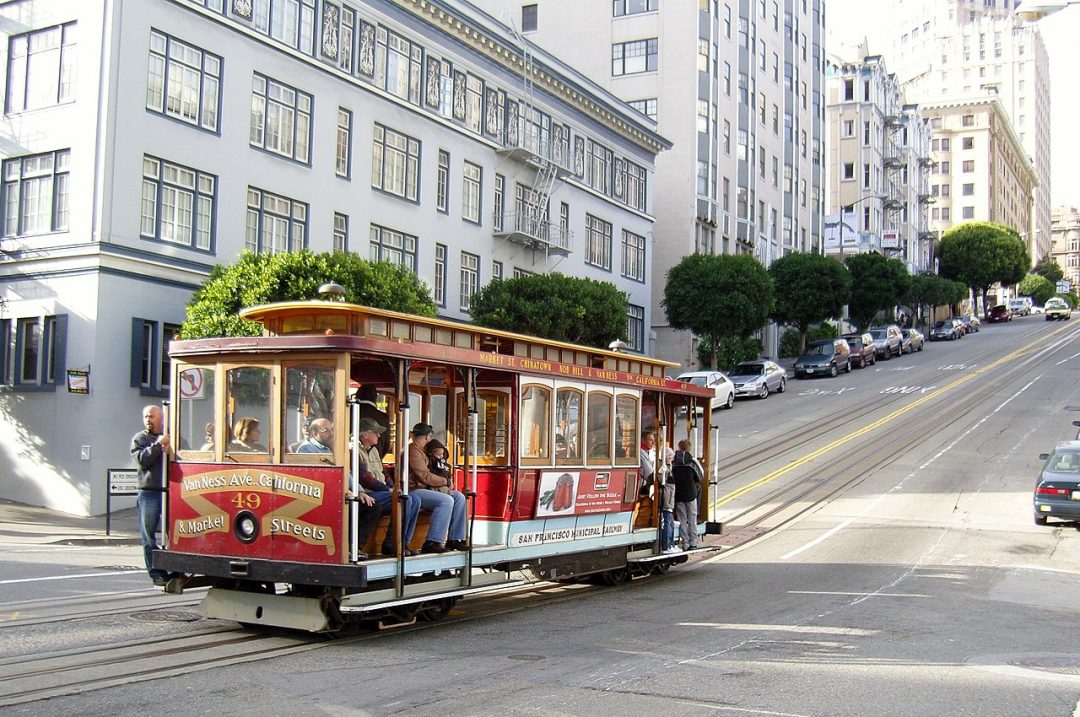 Onto the buildings, or more precisely facades, as the buildings are just that with their open back design for easy access to play. I personally really like both the Music Shop and the Toy Shop as they are, I wouldn’t really change a thing about them, sure fully fledged buildings are better but warrant a higher price tag, perhaps one self contained building wod have been better, but honestly I like the inclusion of two open backed shops. 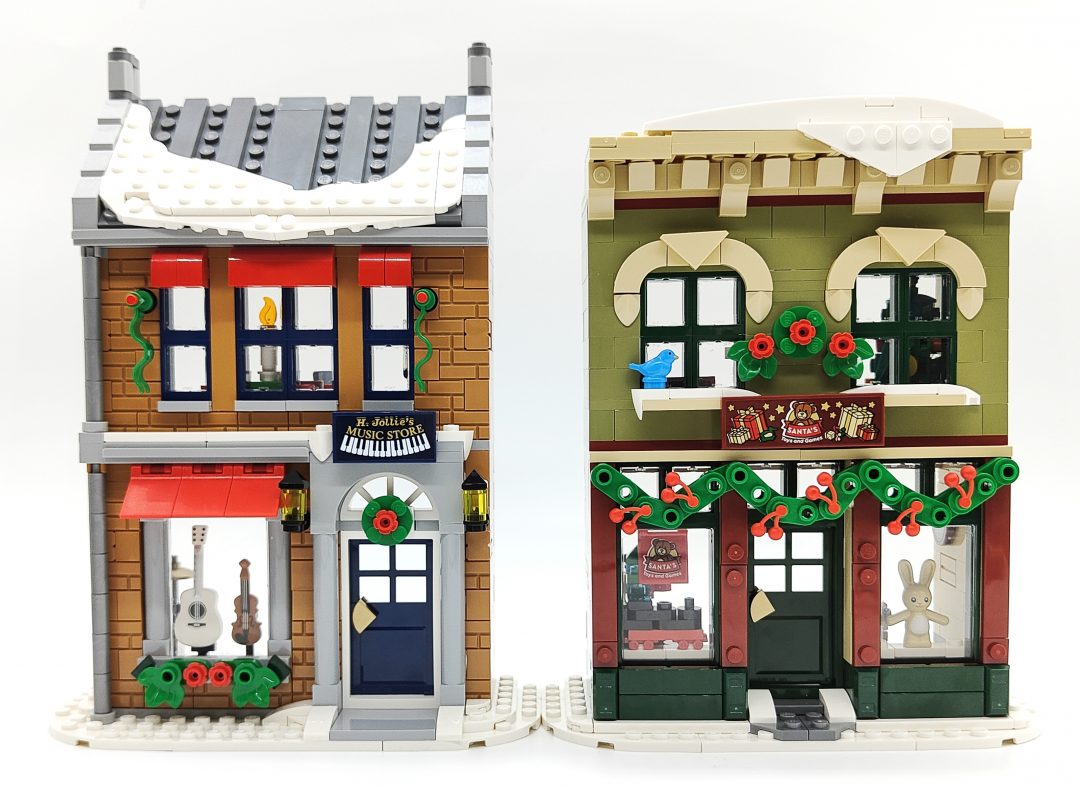 Inside both buildings you’ll find an apartment of sorts above each shop, above the Music Shop there is a kitchen & dining area filled with cups & cookies, an oven and cupboards. Above the Toy Shop is a bed, bedside cabinet, and a Christmas tree with presents underneath.

It seems that the two facades should be one just to make a complete living area, but they’re separate buildings so can’t be, this is the only let down here, space.

Both shops are stocked well, a guitar and violin can be seen displayed in the Music shop window, behind it is a very simple but creative drumkit. By the door is a cash register and extra bows and accessories for music shoppers. There are some really lovely mini-builds in the Toy shop, the train and the robot are cool and push the limits of just how small you can build and still tell what something is supposed to be. 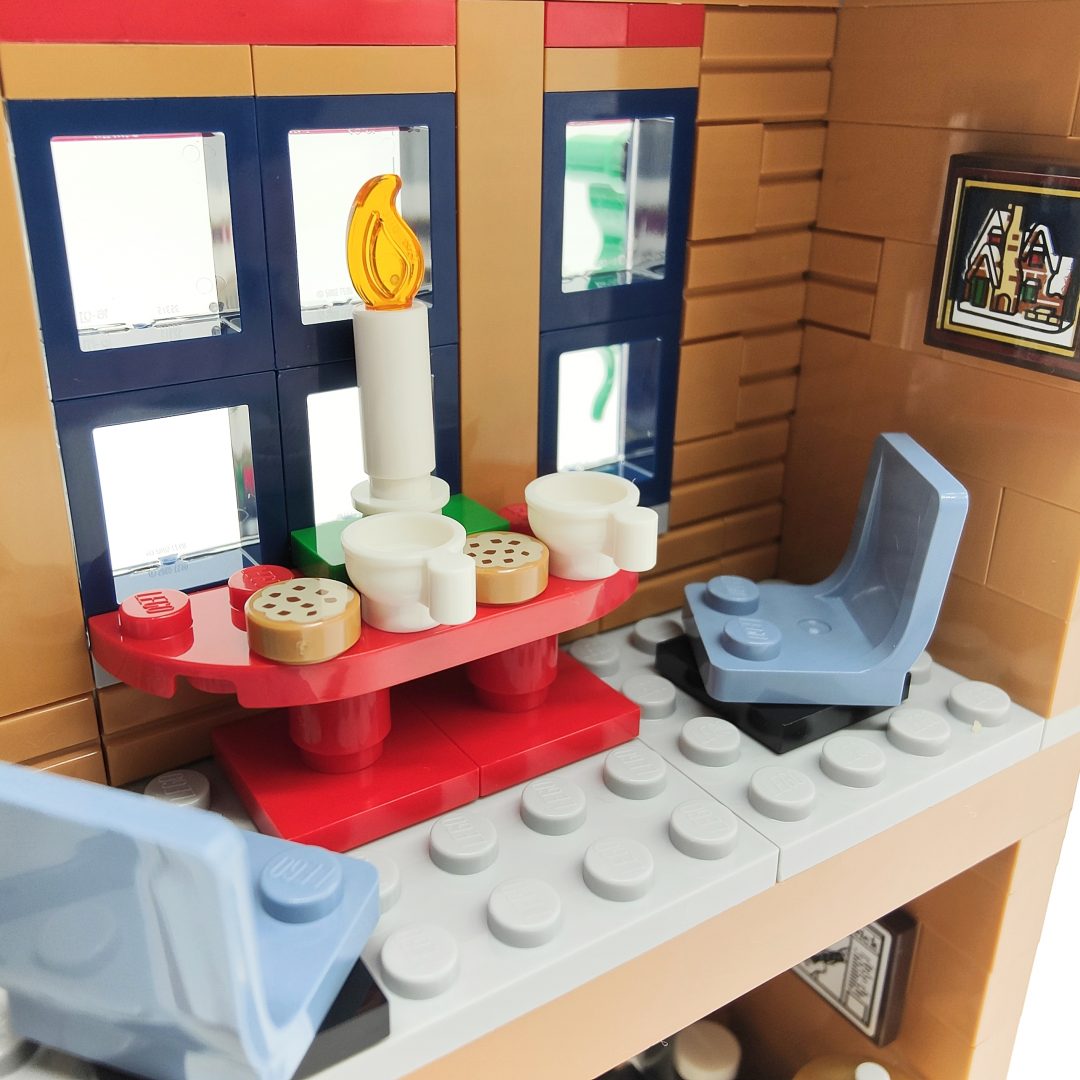 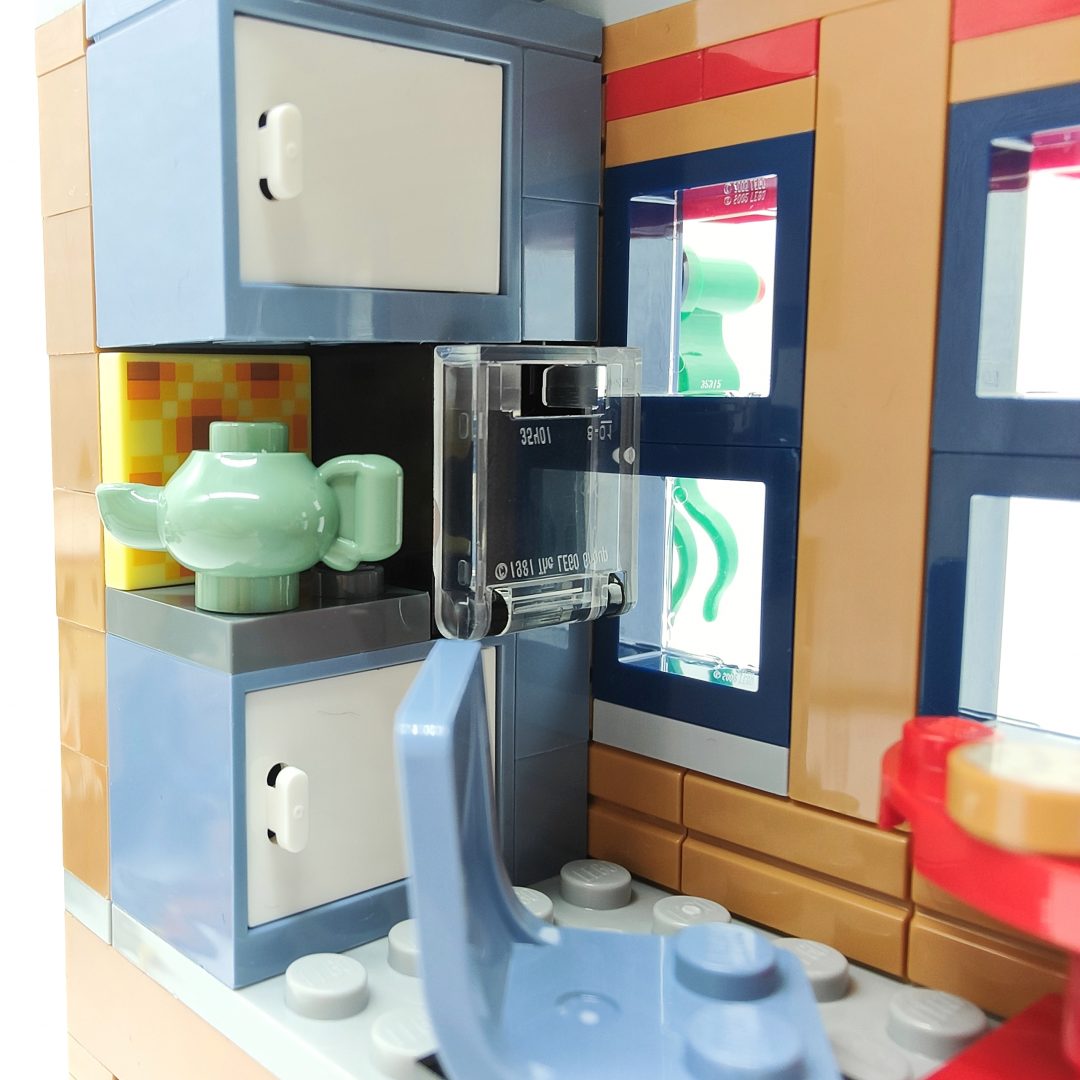 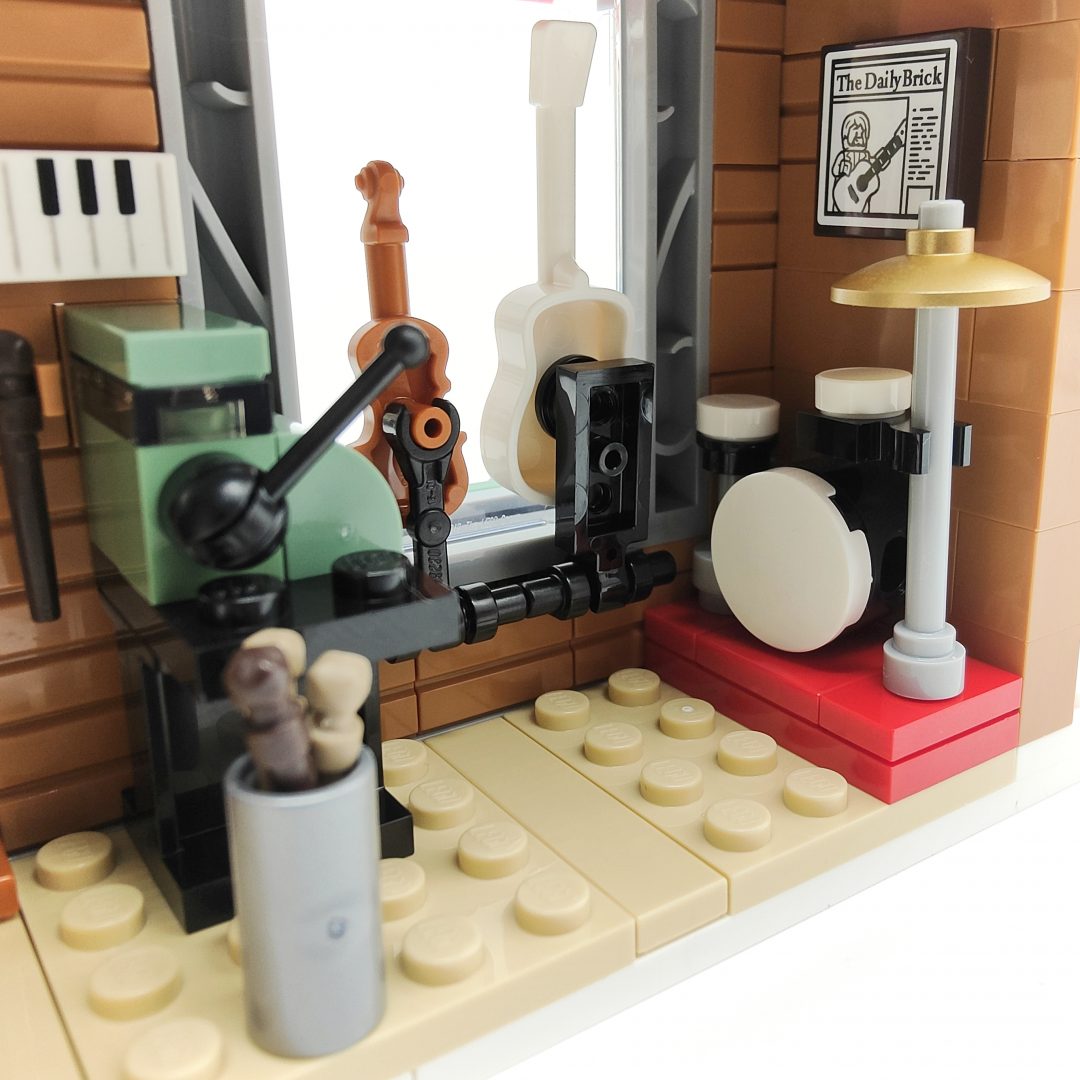 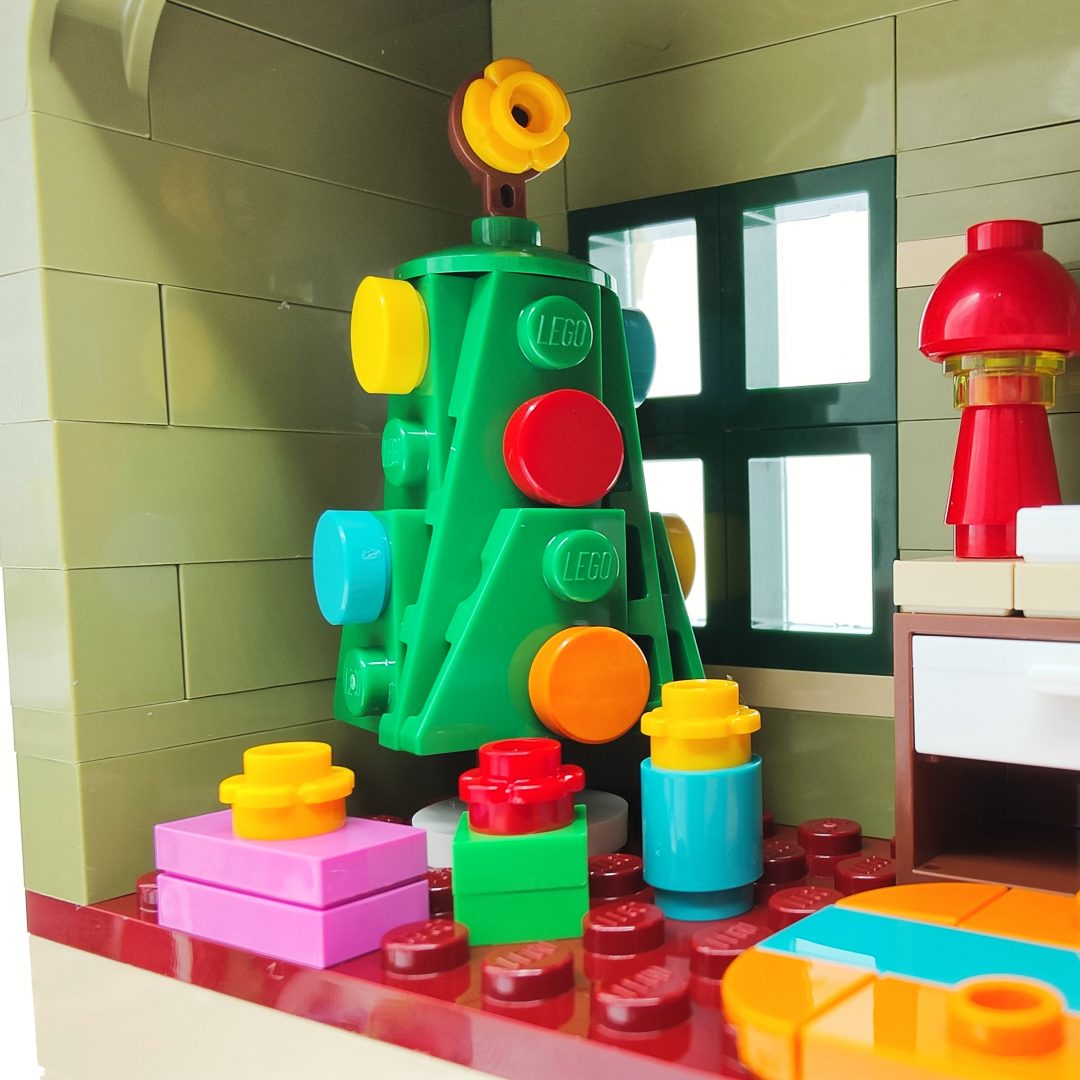 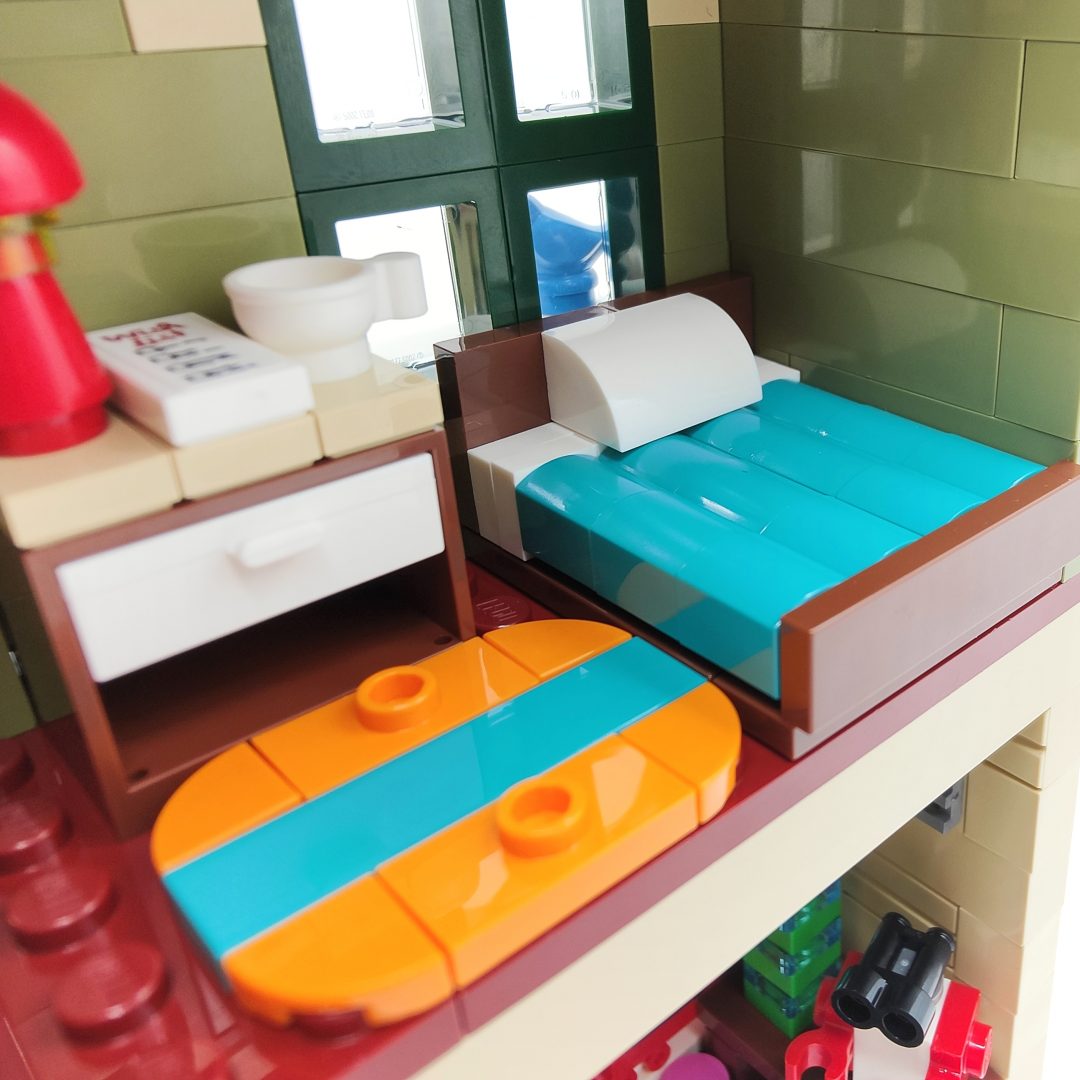 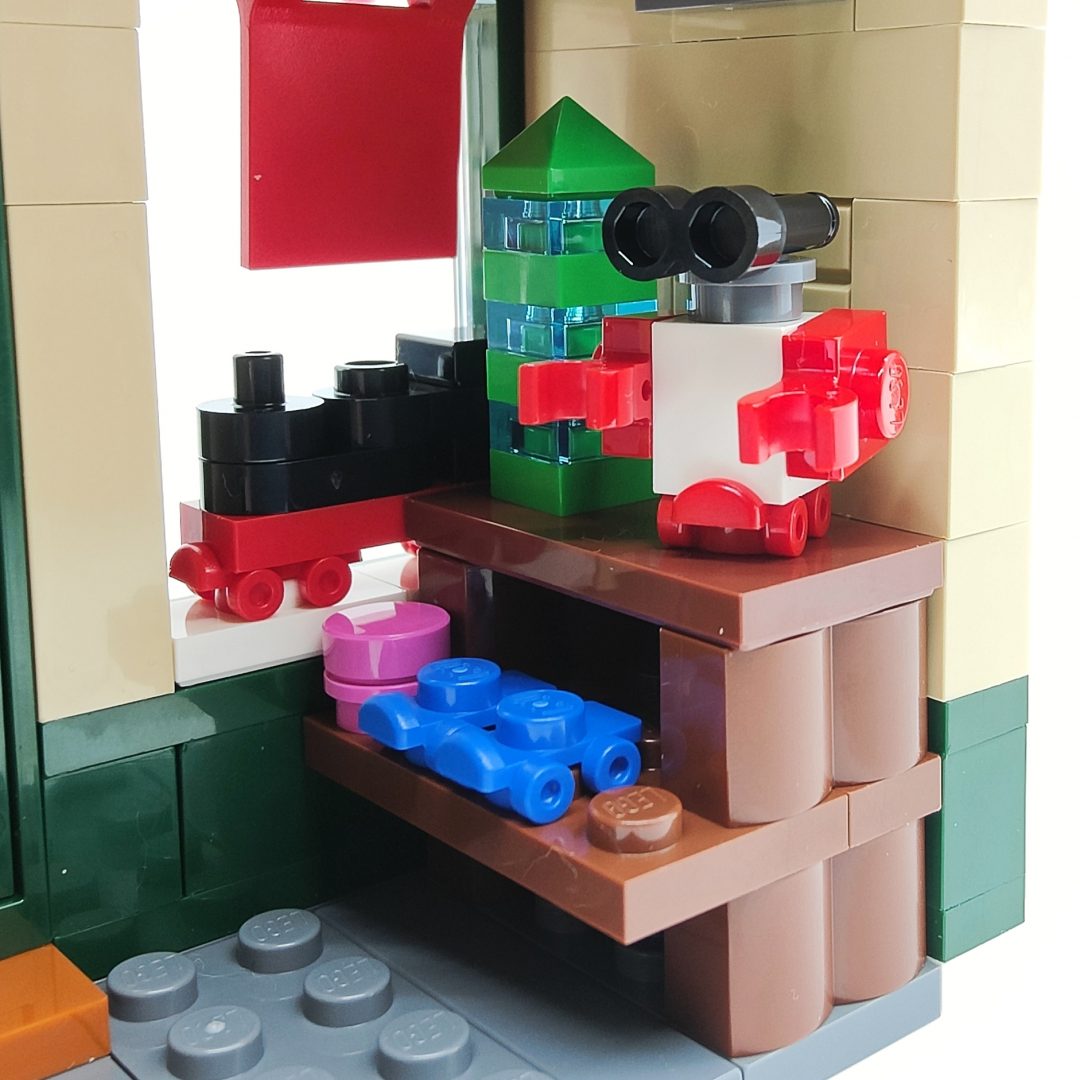 I have been toying with the idea to somehow join these a building together via hinges, to create a whole block. Whether I’ll get around to doing it is another question.

Of course there are many characters that bring this set alive, check them out below.

Minifigures add so much to a set, I’m not just taking about value, the variety of parts and prints make up for some interesting and fun combinations. Take the six characters included with this set, you have one Tram driver, two shop owners, and three shoppers. 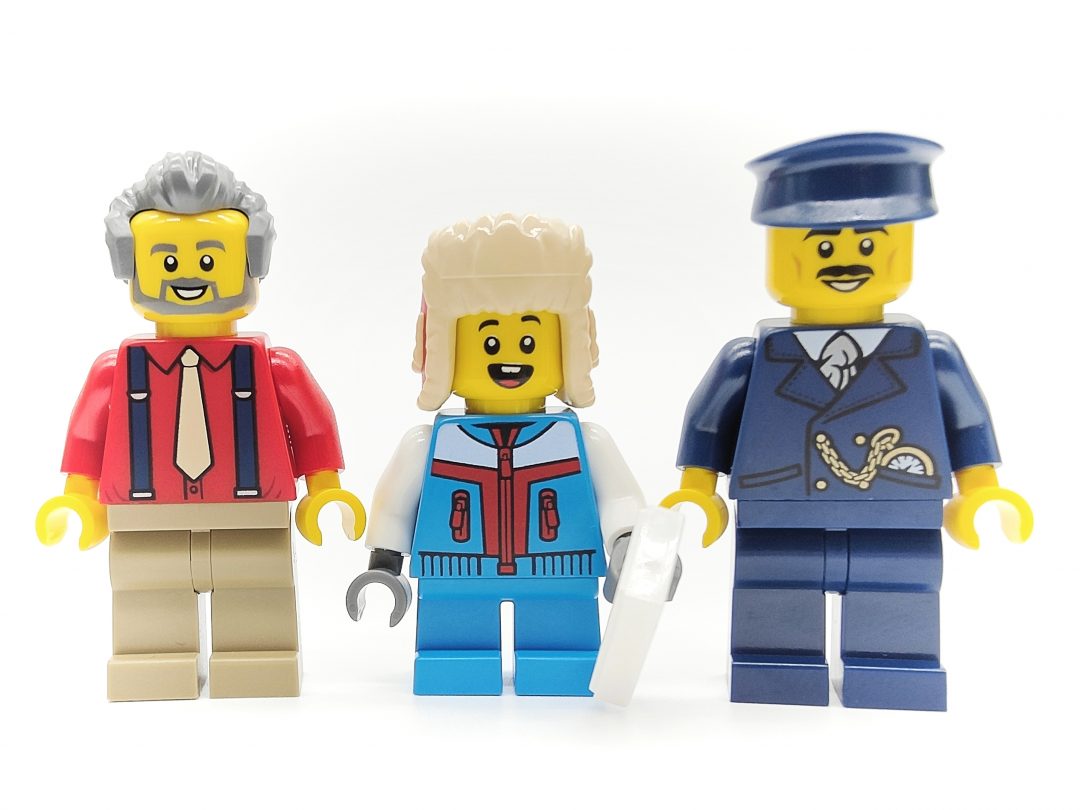 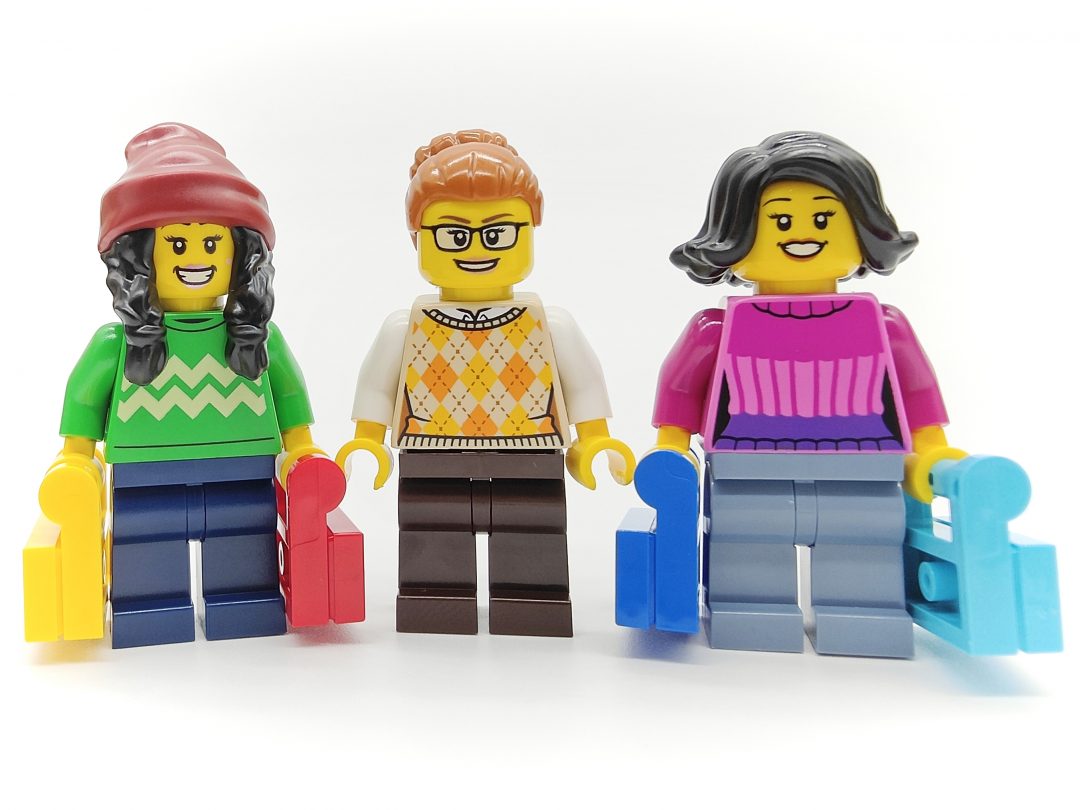 The variety of designs is very nice to see, the jumpers especially grab my interest as they suit the set well, you really get the sense that they love wearing their Christmas jumpers. These will no doubt be pinched for future MOCs and #SigfigScene‘s

Two of the shoppers have their hands full after a hard day’s Christmas shopping. This is a really simple but fun idea that adds a little story to the characters. The little boy is running off to post his later to Santa, the Tram driver is, well operating the Tram, and the Shop owners are happy after just making several sales.

Creating a bustling scene with the Minifigures, Tram, and buildings is very satisfying, posing each character in a walking position or chatting to one another really is what these Winter Village Collection sets are all about, don’t be afraid to have a play and setup different scenarios! 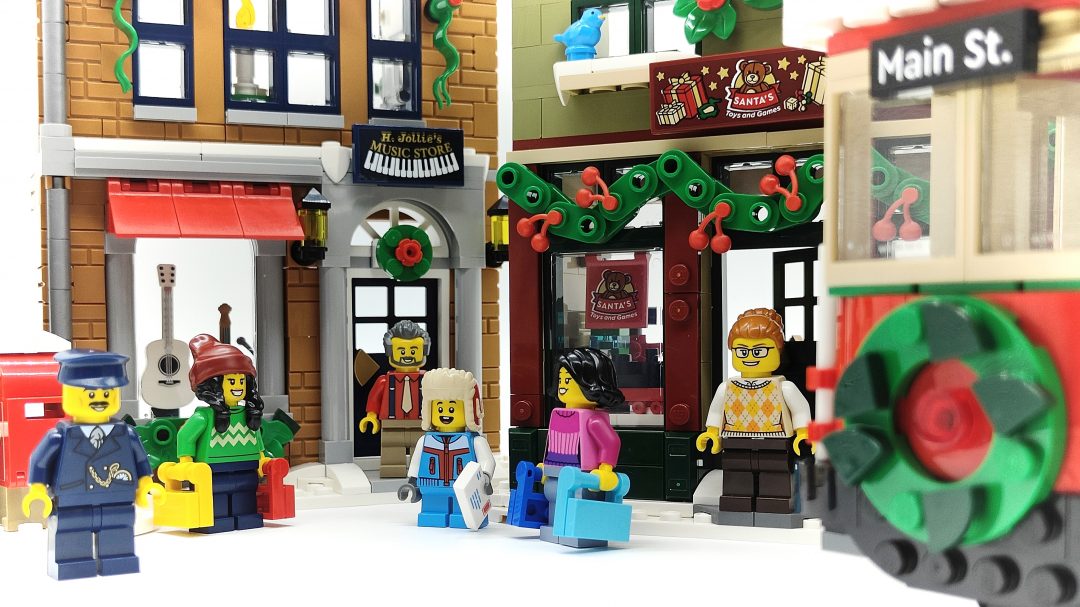 As a whole the set is great and well worth picking up, the price is good too coming in at £89.99, this follows suit from previous years.

The Tram is a lovely, well thought out, addition and welcomed by many in the LEGO community. It fits onto standard LEGO Train tracks also which is a bit bonus. If you’re into motorised trains you’re in luck, the instructions also show you how to get it moving, although you’ll need to source the motor and other bits needed yourself.

Each of the buildings holds its own in style, adding colours and facias we’ve never seen before from LEGO, for example the simple but very effective drainpipe running down the side of the Music shop is an excellent detail to include.

All the Minifigures are great and come with their own unique style, again the Christmas jumpers are my favourite parts. The Tram driver features the torso only previously available in the recently released Motorised Lighthouse set, so that’s a great little bonus too. 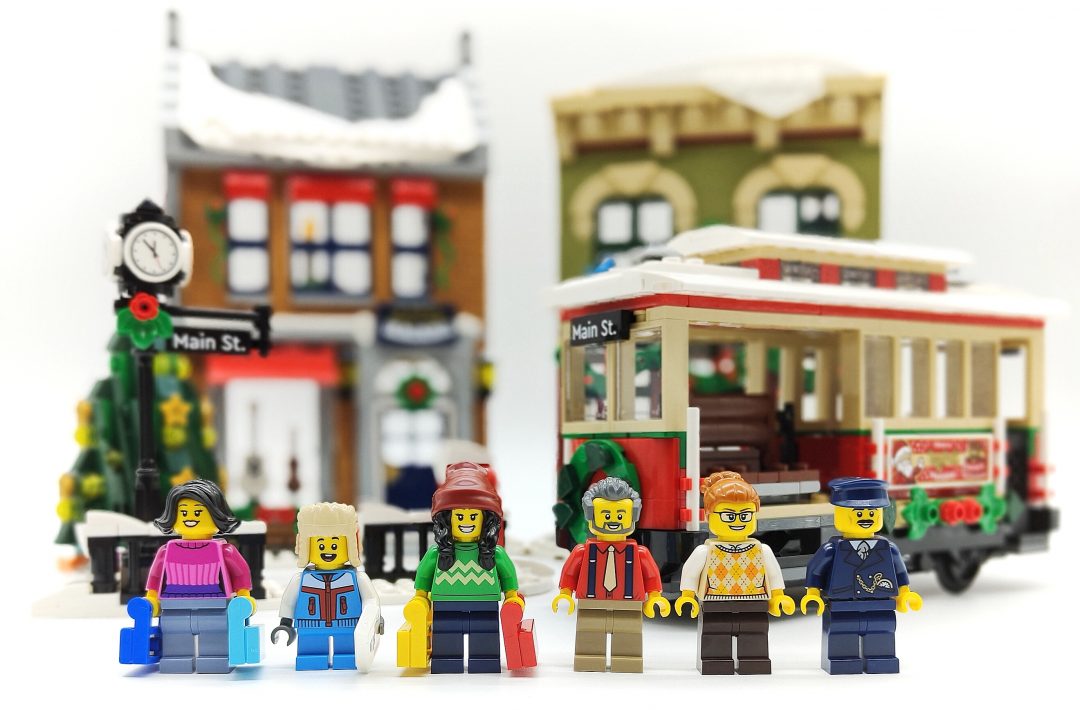 Thank you for taking the time to read this review, we really appreciate your time and support. Please do let us know what you think of the set, if you have it or hoping to get it soon, we love hearing from you! 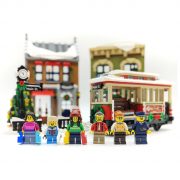 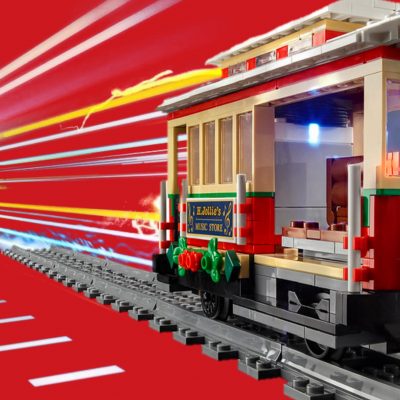 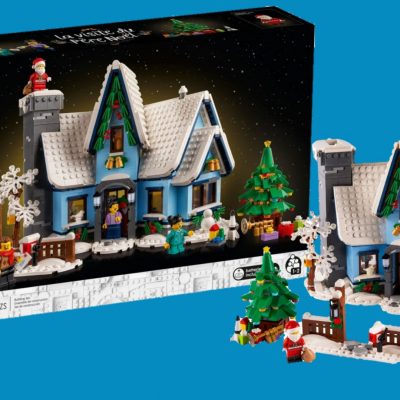