LEGO has a long standing tradition of offering incentives to purchase from them and long may it continue if the quality is there just like in their most recent GWP (gift with purchase) LEGO Ideas Ray The Castaway (40566)!

I don’t usually go out of my way to grab a GWP set unless it peaks my interest, the last couple of LEGO City styled freebies have been great but with the added price increases and higher spend requirements most GWP have become harder to justify getting. That being said if you’re making a purchase anyway, or are grabbing something from your wishlist then nows the time to do it. Not only do you get LEGO Ideas Ray The Castaway (40566) but you’ll also bag yourself the LEGO VIP Halloween Addon Pack (£50 spends or more).

If you’re a fan and avid reader of The Brick Post, you’ll know that more often than not we stream smaller LEGO builds live via our Instagram channel (@thebrickpost). Please follow us to be notified of future videos.

Without further ado, here is our review of LEGO Ideas Ray The Castaway (40566)! 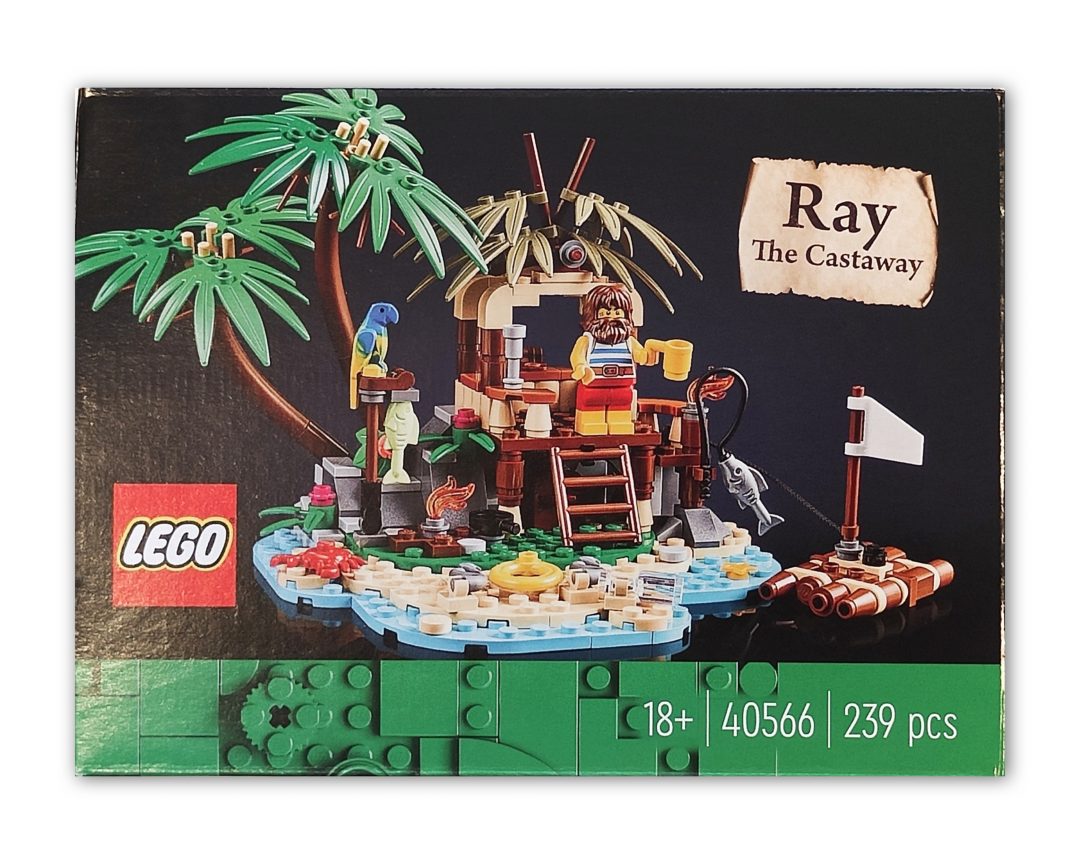 The box is styled with the 18+, Adults Welcome, stark black background and accompanied by a green banner running along the bottom, this is also where the set details are. The set consists of 239 pieces, a lot of which are plates that makeup the base it sits on.

Cracking the box open and tipping out the contents, you’ll see there are five bags in total, although none are numbered. Also inside is a thin instruction manual, as you can see from the photo below its a little ceased, it must have been jammed inside the box in a hurry. Not to worry though as it obviously doesn’t hinder the building experience and will never be used again.

Inside the manual you’ll find details about the set and a bit about the original fan designers, DadiTwins. One of the reasons I love the Ideas theme, you get to know who is behind the set. 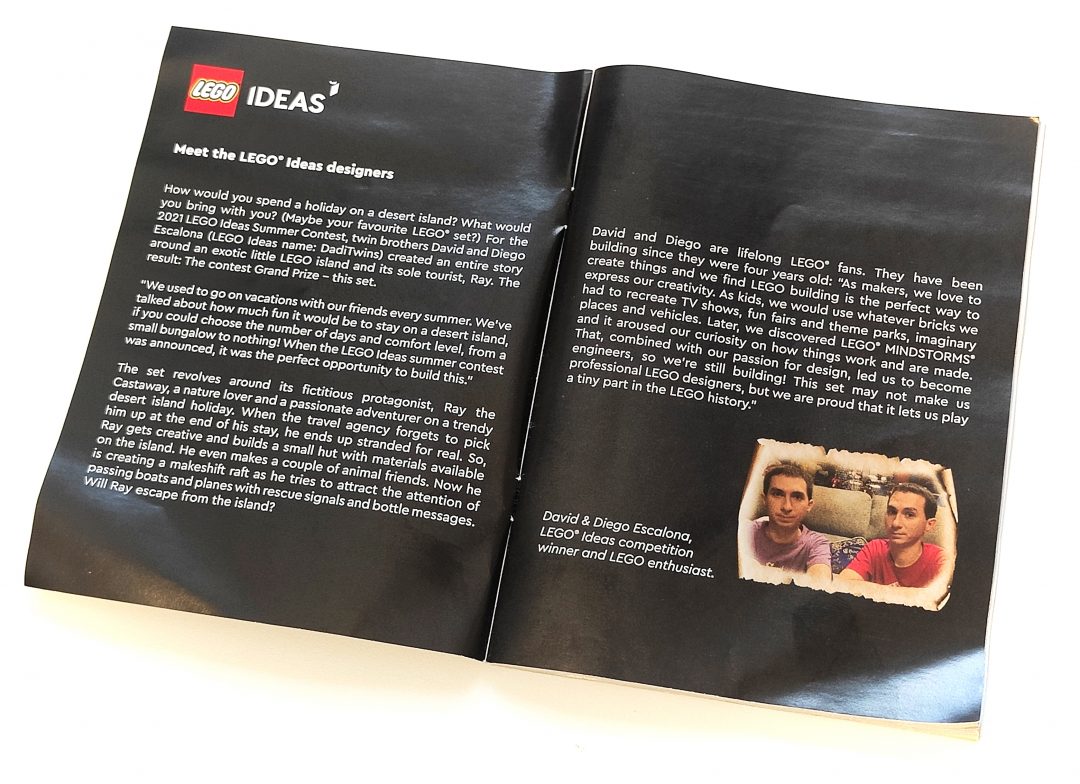 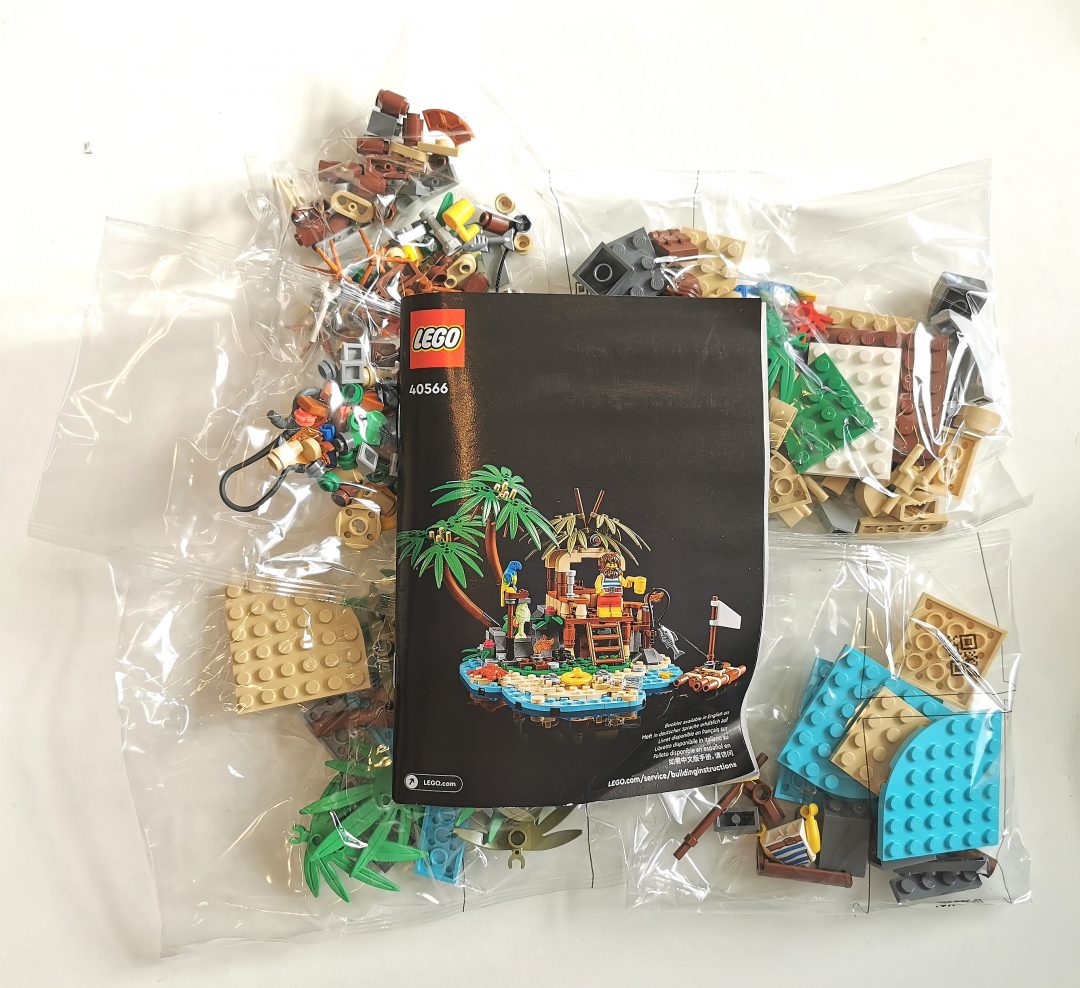 Starting off with the base, which brings together all the larger plates, you start to layer curved blue and tan pieces to create a very eye-pleasing oddly shaped base.

The tan plates obviously represent the sandy island on which Ray has been stranded. This is where he’s built his lovely little shack, from logs, twigs and palm leaves. This has got to be my favourite part of the set, the way in which the designers have covered the shack with leaves and left two branches (bars) stuck out the top, its simple but very effective. 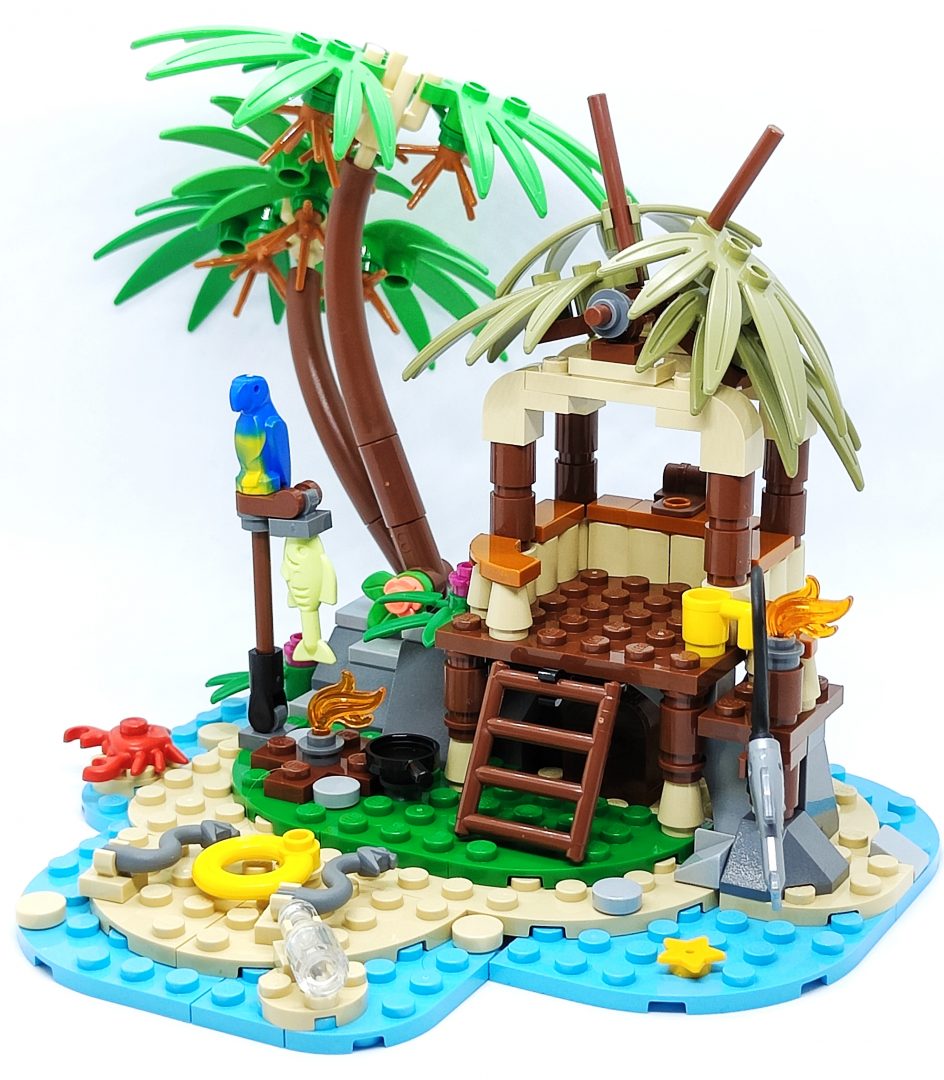 Also in the island you’ll find two palm-trees, again I like the way they are built and shoot off in different directions, it looks very natural. On the beach you’ll find and SOS message made out of random washed-up items, including a yellow life-ring. Next to that is an empty glass bottle and a friendly crab, well I hope its friendly!

Ray isn’t completely alone as there is a Parrot to keep him company. We’ve seen this multicoloured marble effect Parrot before it other sets, mostly Pirate related builds. But it’s always nice to see one in an Ideas set. 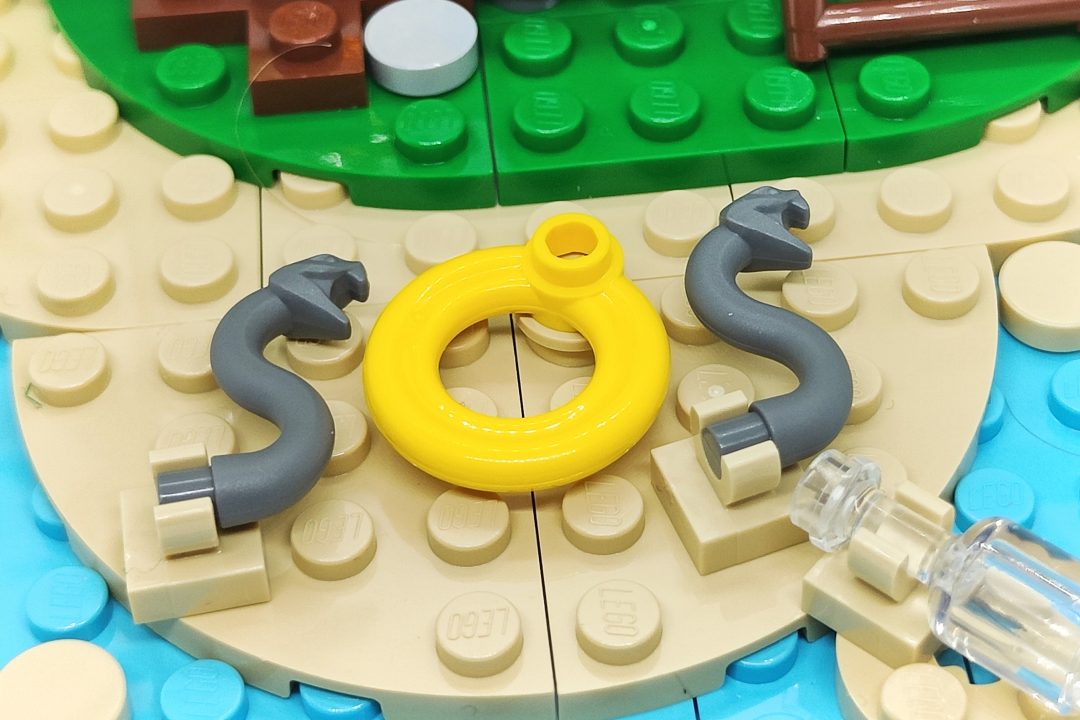 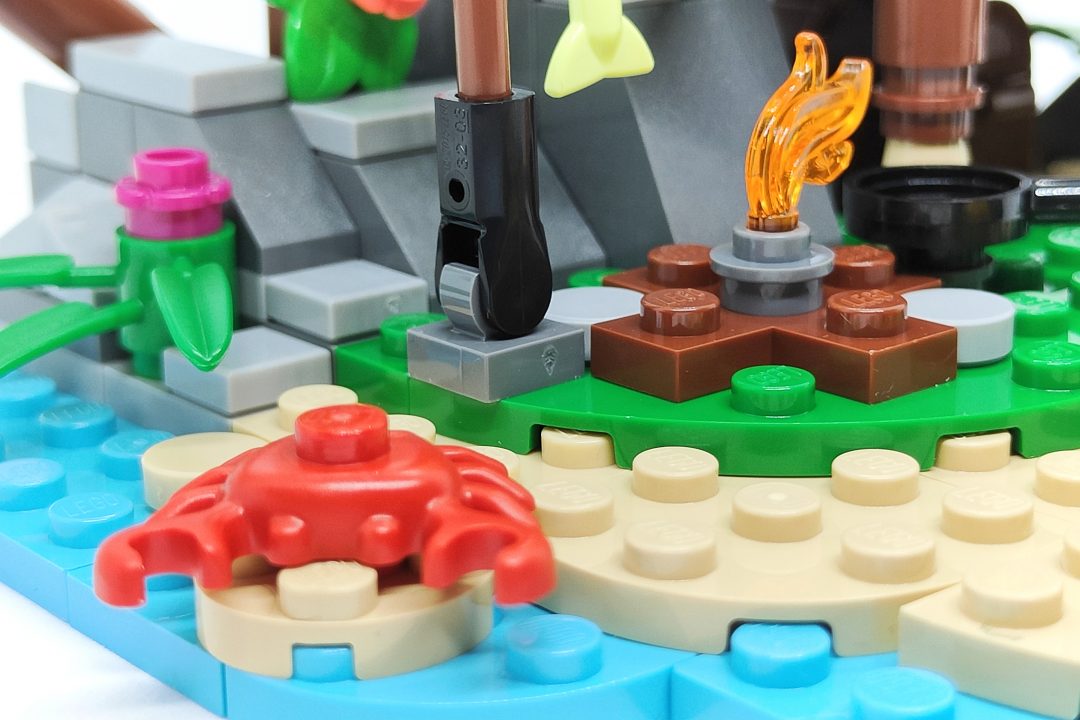 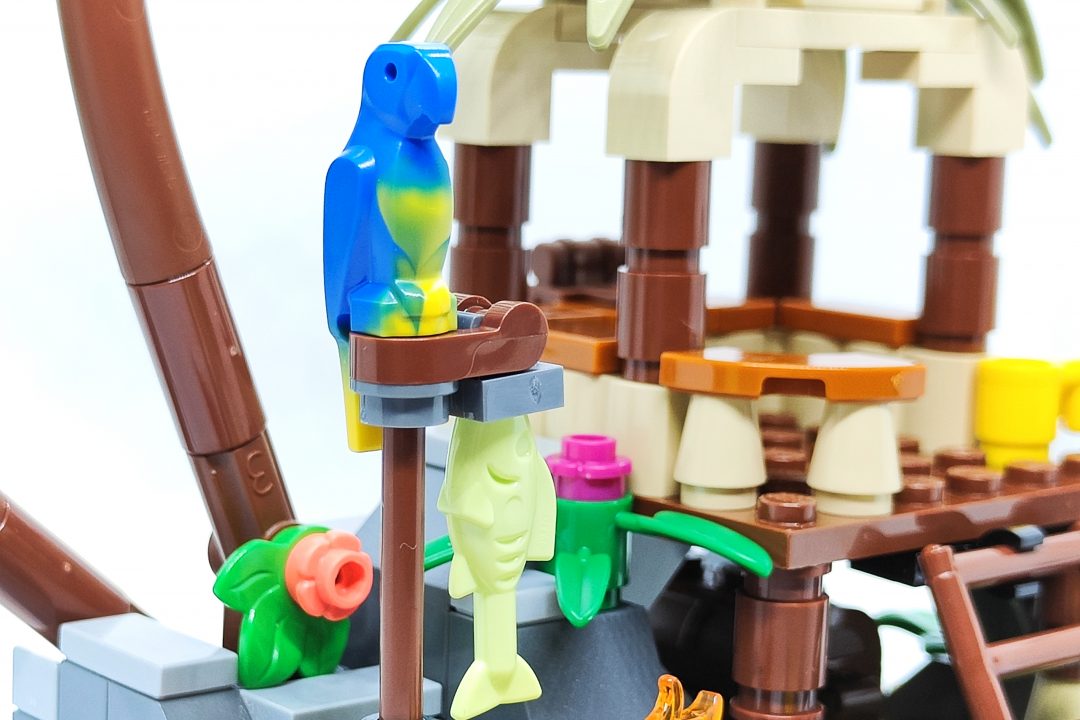 It’s unclear how long Ray has been castaway on the small island but he has learnt some very handy skills, a fish has been hung out to dry on stick near the shack whilst another is still in the end of a fishing rod.

Hidden under the wooden structure and stuck between some rocks is a treasure chest, which I hope Ray has found as it contains a handful of gems. If he ever gets off the island he can cash them in for a big sum of money.

The shack is simple by design but then that is what gives it its charm, with the log shaped bricks as walls and 1×1 round bricks as pillars to keep it off the ground. There is a small ladder running up the front to allow Ray access to his home-sweet-home! 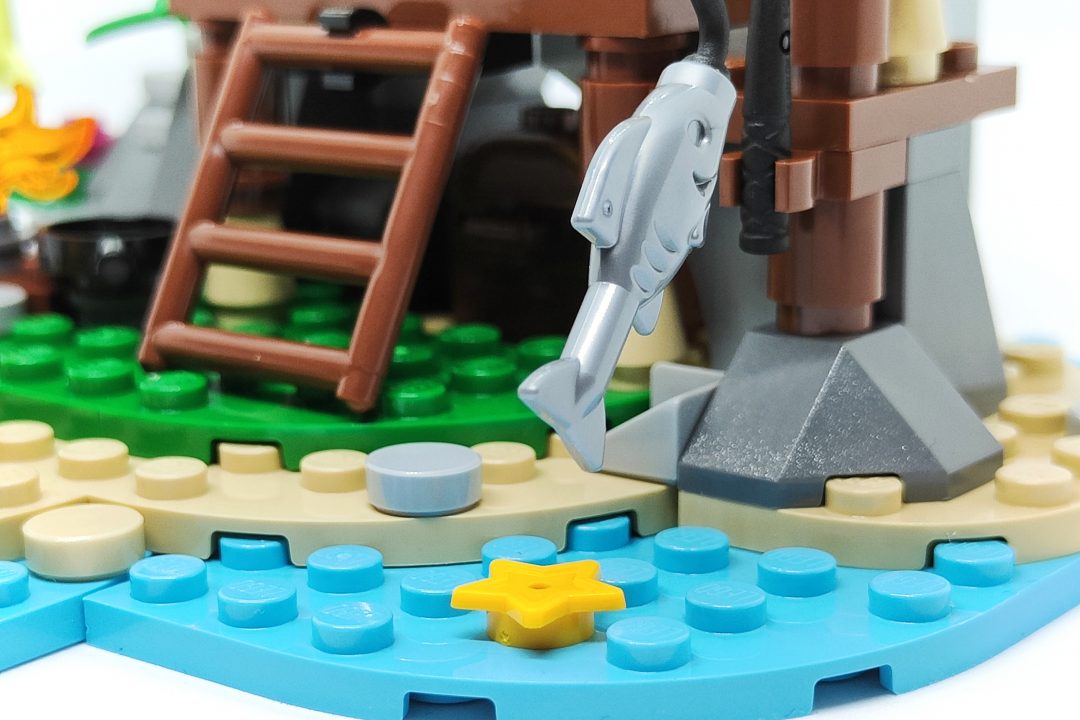 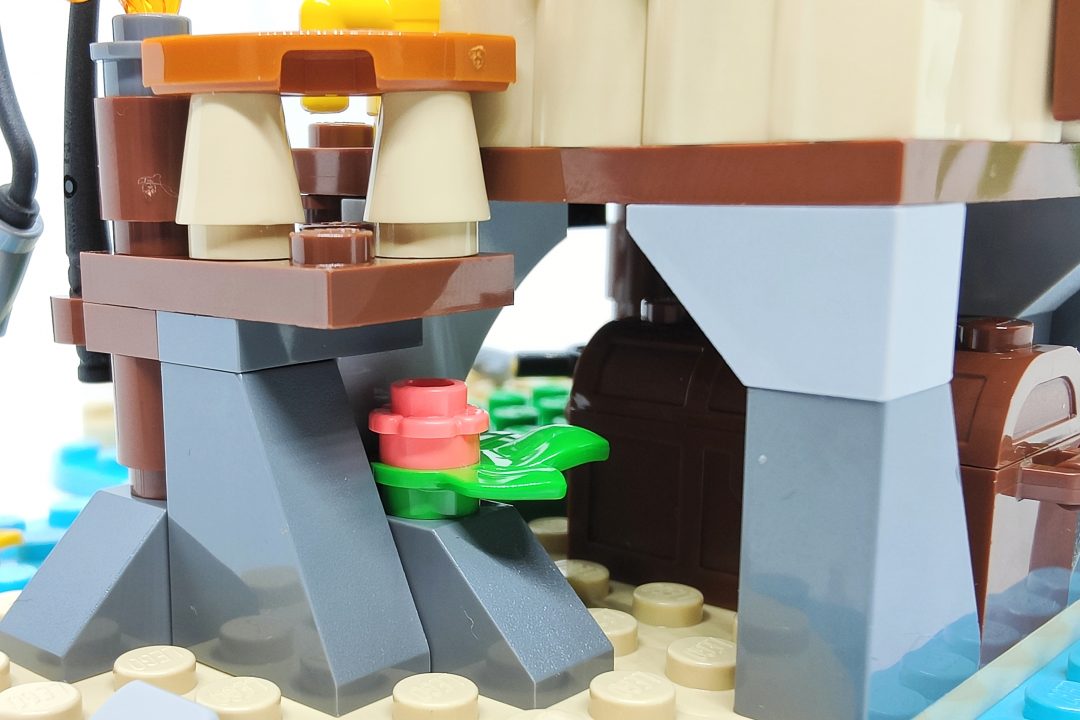 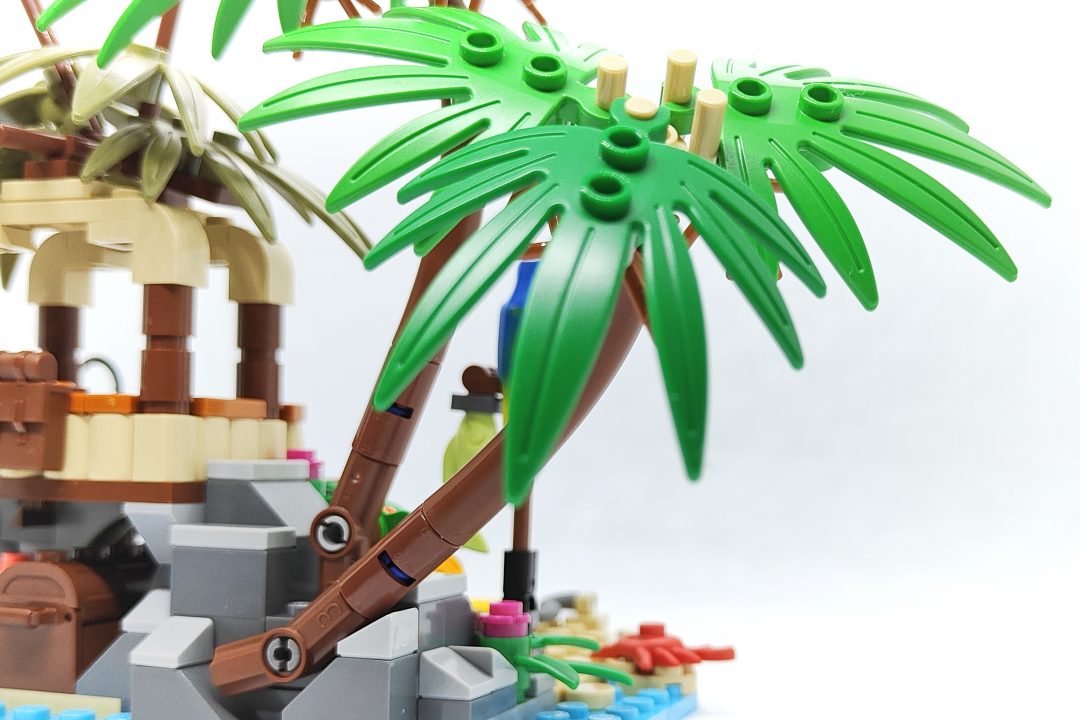 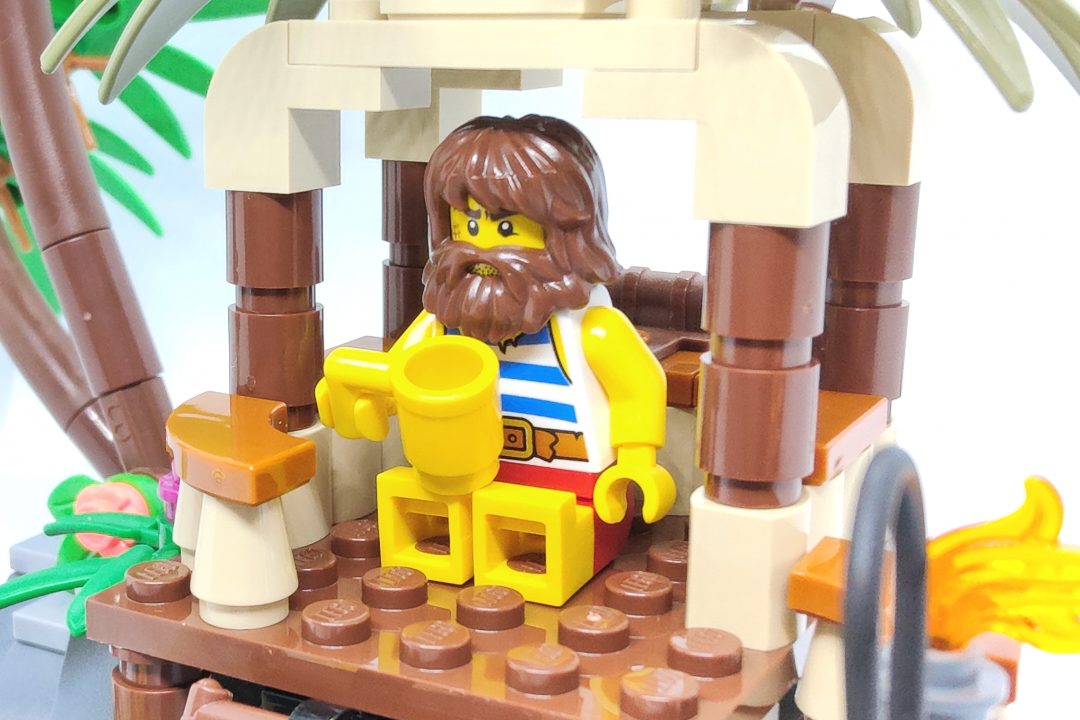 Ray himself is a very cool Minifigure, made up of great looking parts and accessories.

The dual-moulded legs have been seen before, most notably on the Lifeguard character in a past CMF (Collectable Minifigure) Series. The torso is very reminiscent of LEGO Pirate Minifigures we’ve had a long time ago, although the design has been given a modern update. 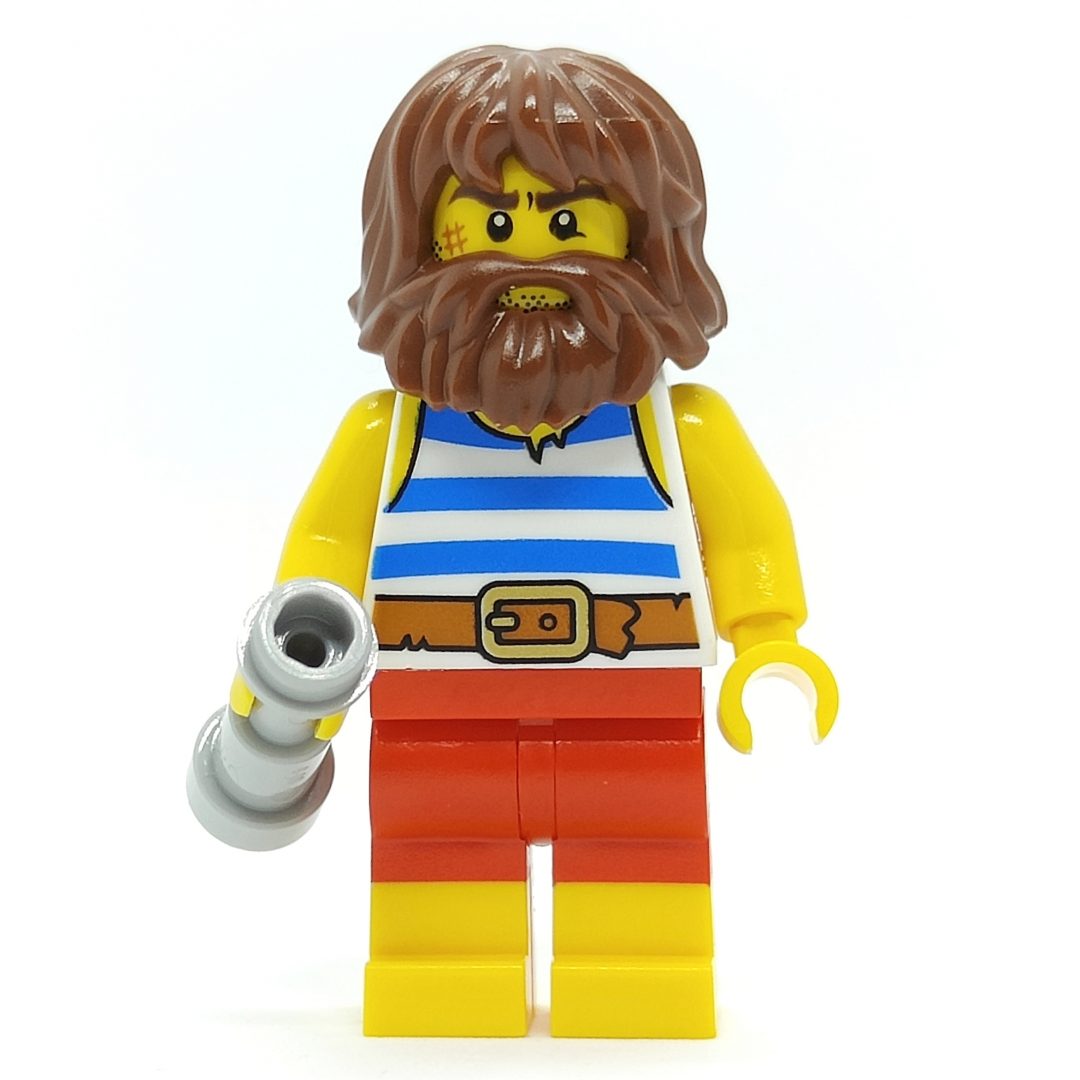 Ray comes complete with a full head of hair and a very unkempt beard, the perfect look for a Castaway you might say. Pop of the hair piece and you’ll find a somewhat disgruntled smirk expression, a scar/graze, and some stubble. Perhaps this is what he looked like before he got washed up on an island? Who knows! 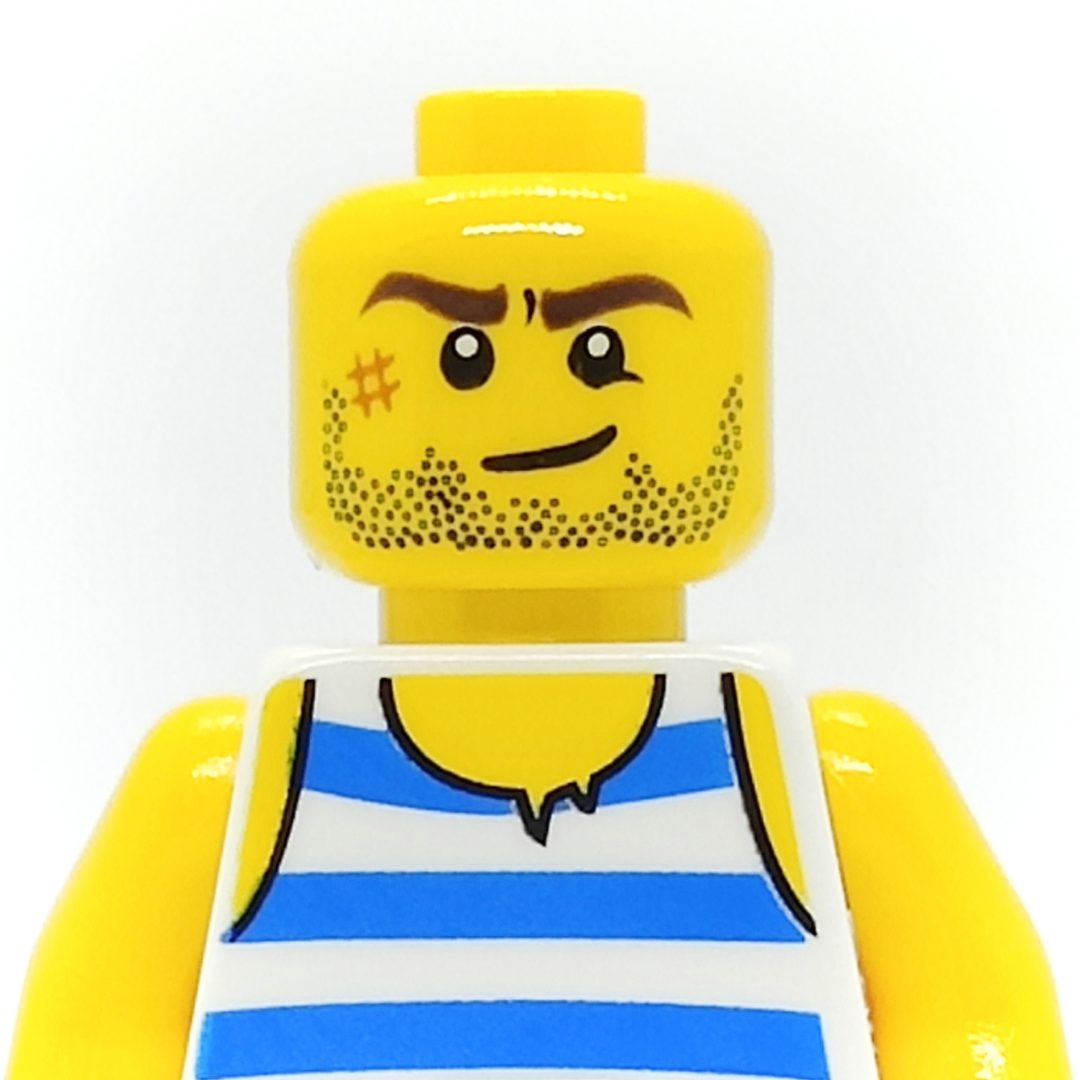 Overall the set is great and personally speaking is worth the spend limit, just, especially if you’re grabbing some big to begin with.

The parts included are nice and the curved plates really adds to the overall look and aesthetic of the island. Added foliage, accessories and animal figures is a nice touch.

Ray is a great character and one I’m happy to have in my collection. This story is a sad one to be alone on a desert island but he seems to be doing OK, which is portrayed by the freshly caught fish and hidden Treasure under the shack.

See below for our score out of 10, broken up into handy sections. 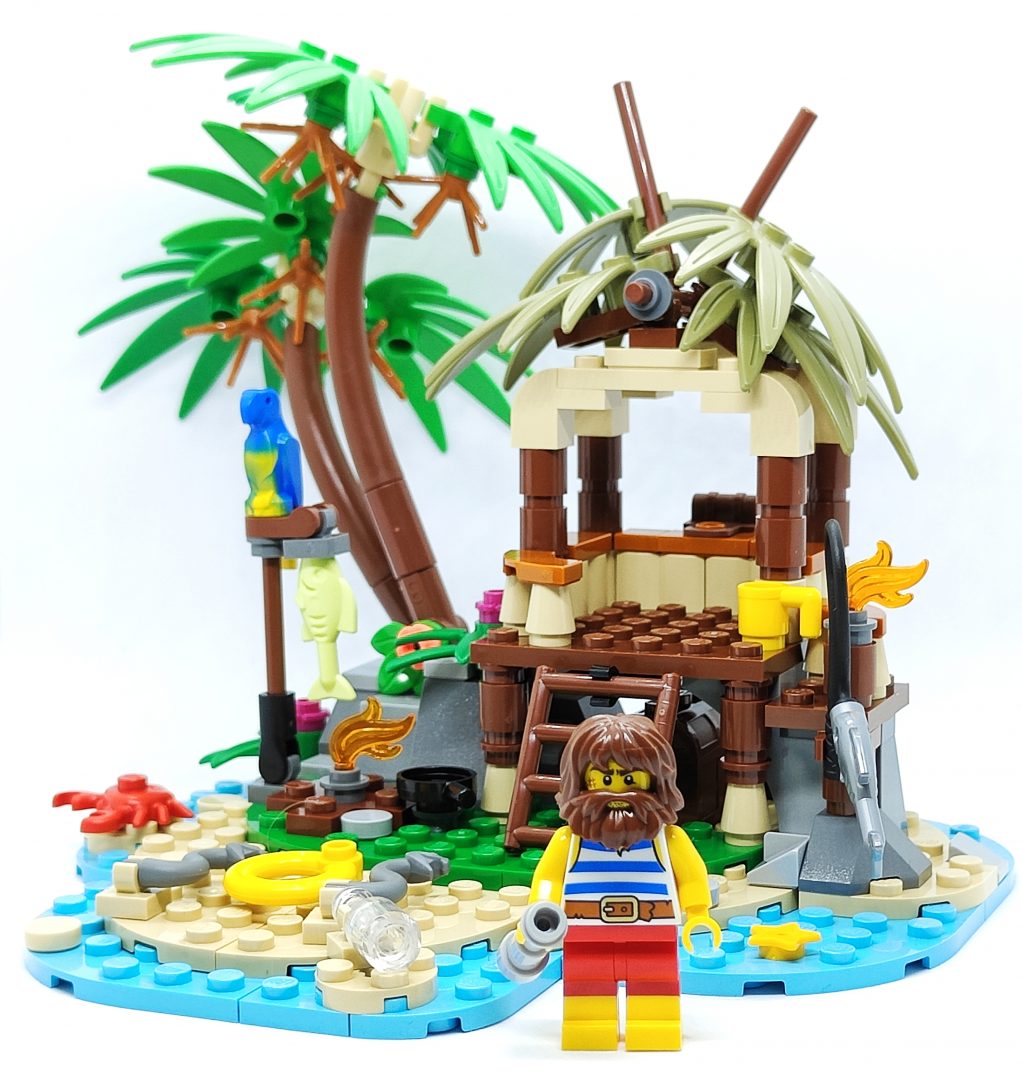 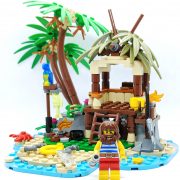 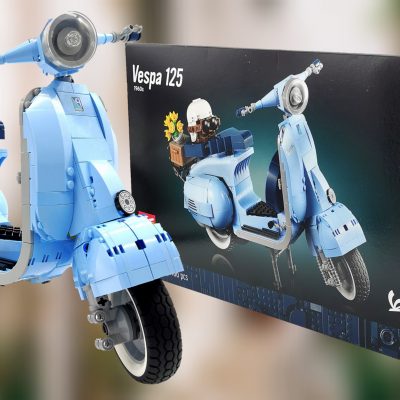 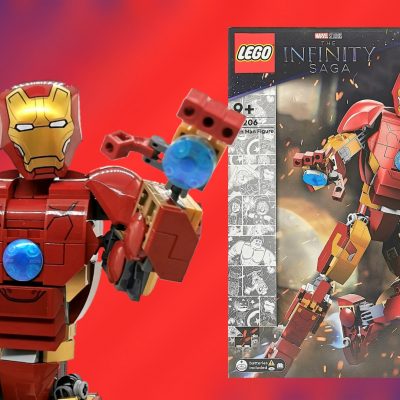