We’re back once again with another new 2021 LEGO Polybag, this time we build and review a rather cool little popup/portable LEGO Shop – LEGO City Stand 30569! 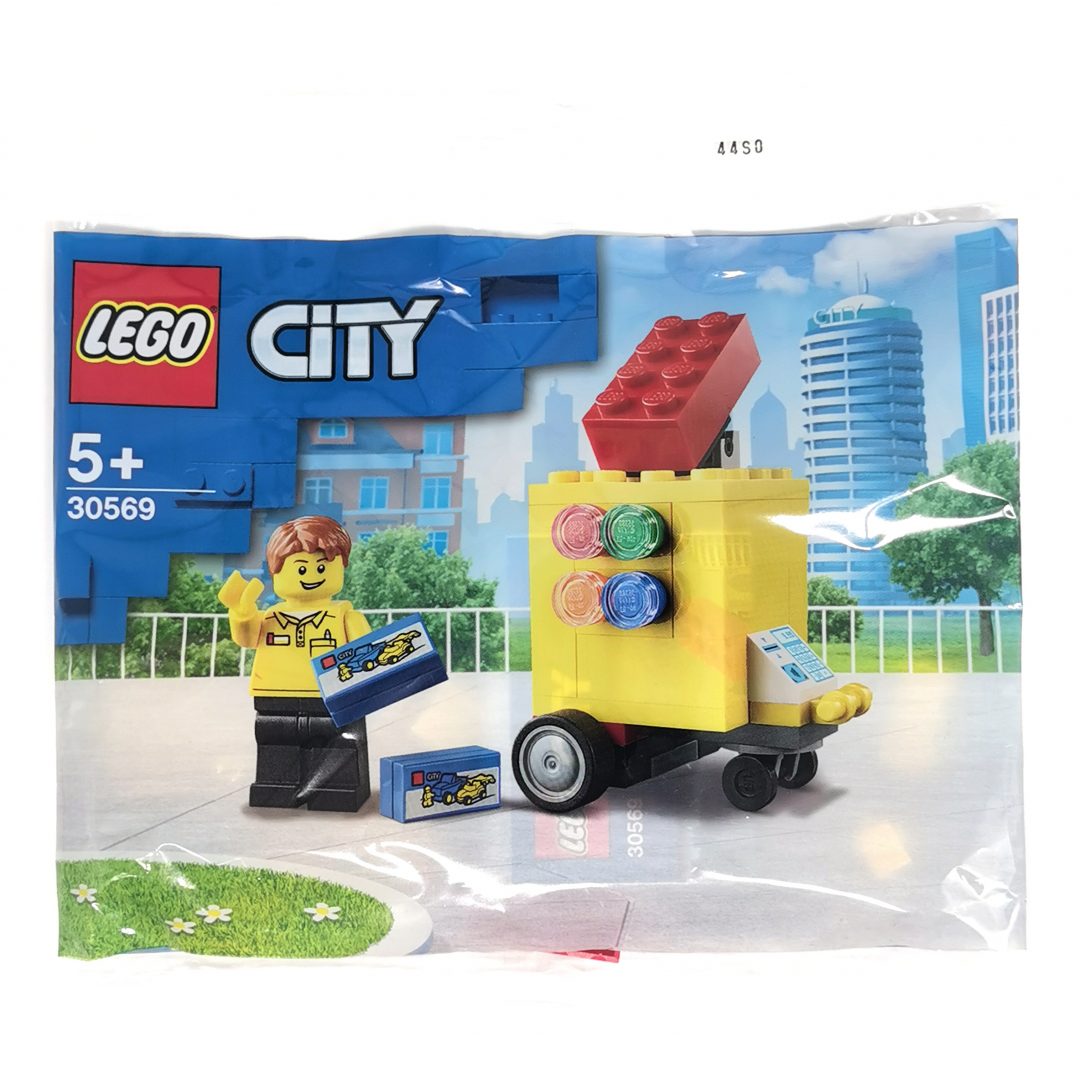 When LEGO revealed the first handful of polybags releasing in 2021 I got especially excited for this one, as I have a fondness for Minifigure scale builds that can eventually fit into my Cityscape, once I actually get around to building one of course.

It features a LEGO branded Minifigure and a popup LEGO set shop/stand. As we all know you can never have enough LEGO which is why you can now purchase your favourite set right on the street! 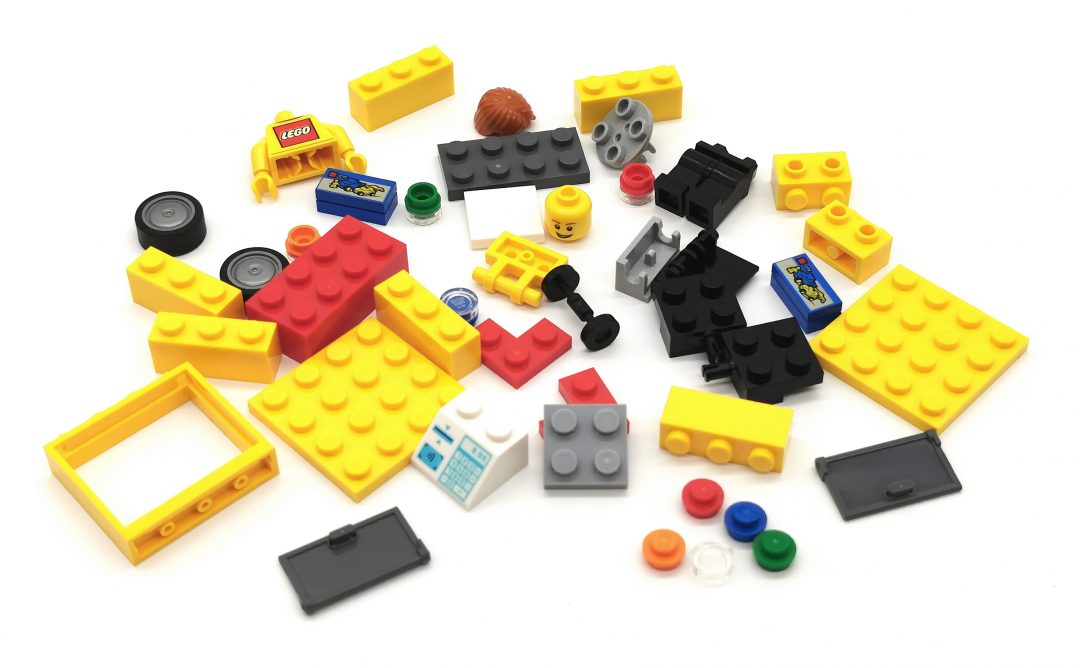 The build itself is simple enough and quite straightforward to construct and the polybag contains a lot of bright yellow parts. The coloured compartments on the side which represents a basic Pick a Brick wall. There is space inside for only a handful of LEGO items as well as the two brick-built sets included – which are printed by the way – 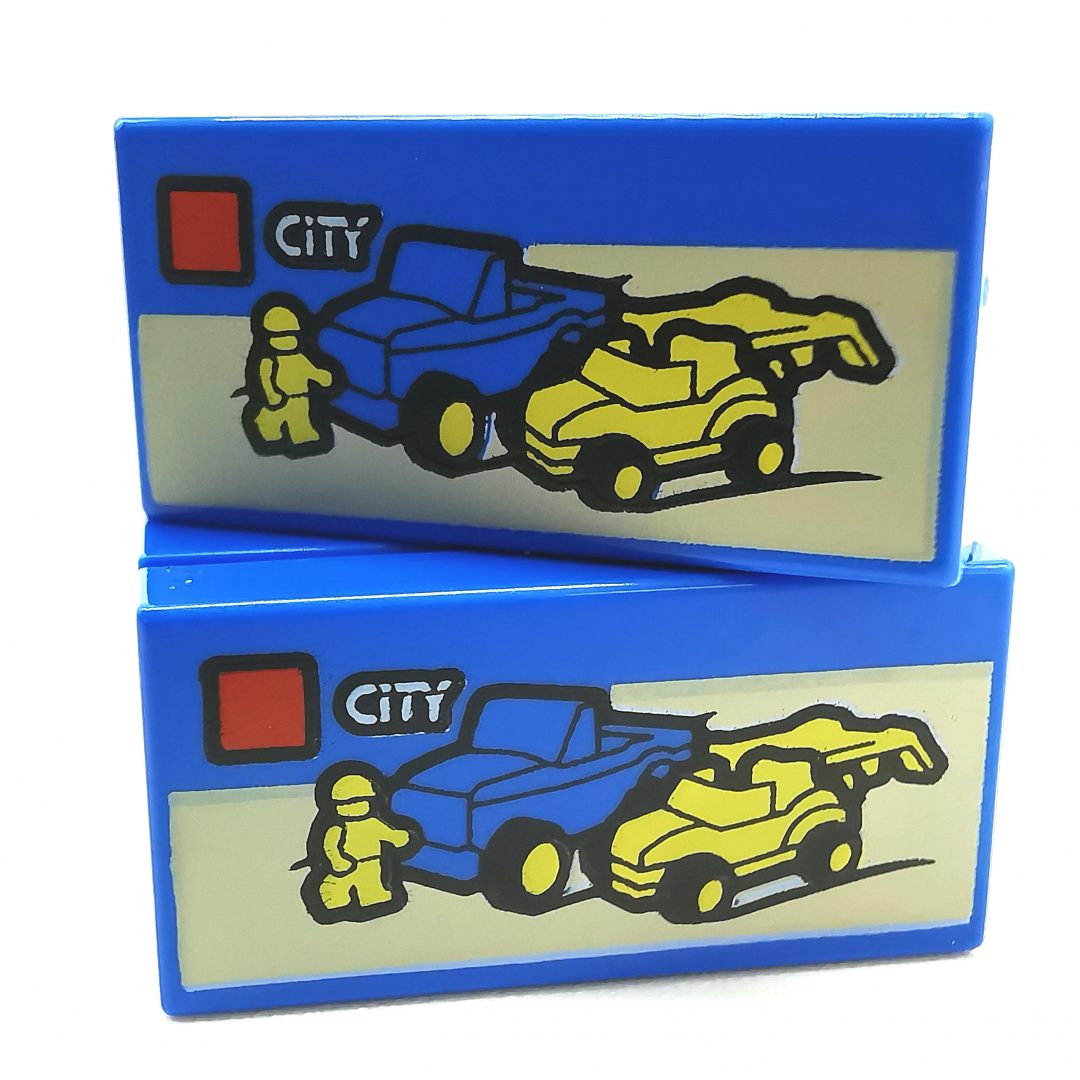 Even though the printed tiles are identical I’m so happy they weren’t stickers. I know we usually see prints in Polybags but it’s just reassuring that LEGO did themselves proud and resisted stickers to represent themselves and their sets.

Whoever manned this popup stand last must of had a great day as there are only two sets left in stock, although there isn’t much space to begin with. Open the doors as the back of the stand and you see what the stock is kept, it is 2 studs wide so perfect for smaller LEGO sets, you most certainly wouldn’t find a UCS Millennium Falcon here! 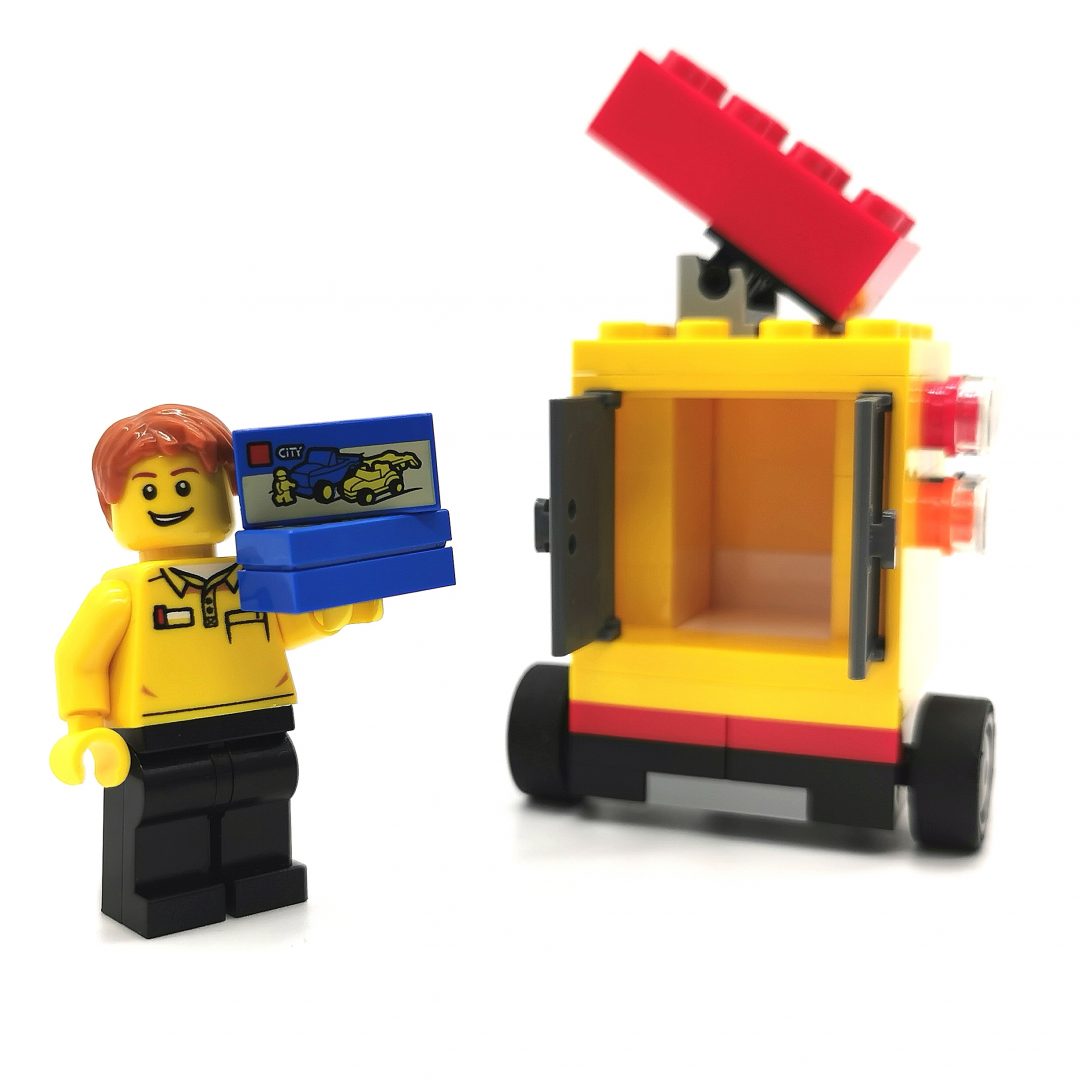 Roll up roll up, get your Alego here!

A other nice touch is the 4×4 yellow window with grey doors, you don’t see that combination very often. Window pieces used to be one of the main parts of a set back in the ‘good old days’ but you rarely see them in modern sets, of course you get loads in Modulars and alike but in Polybags not so much. If you like to part out sets then this maybe a good shout for you. 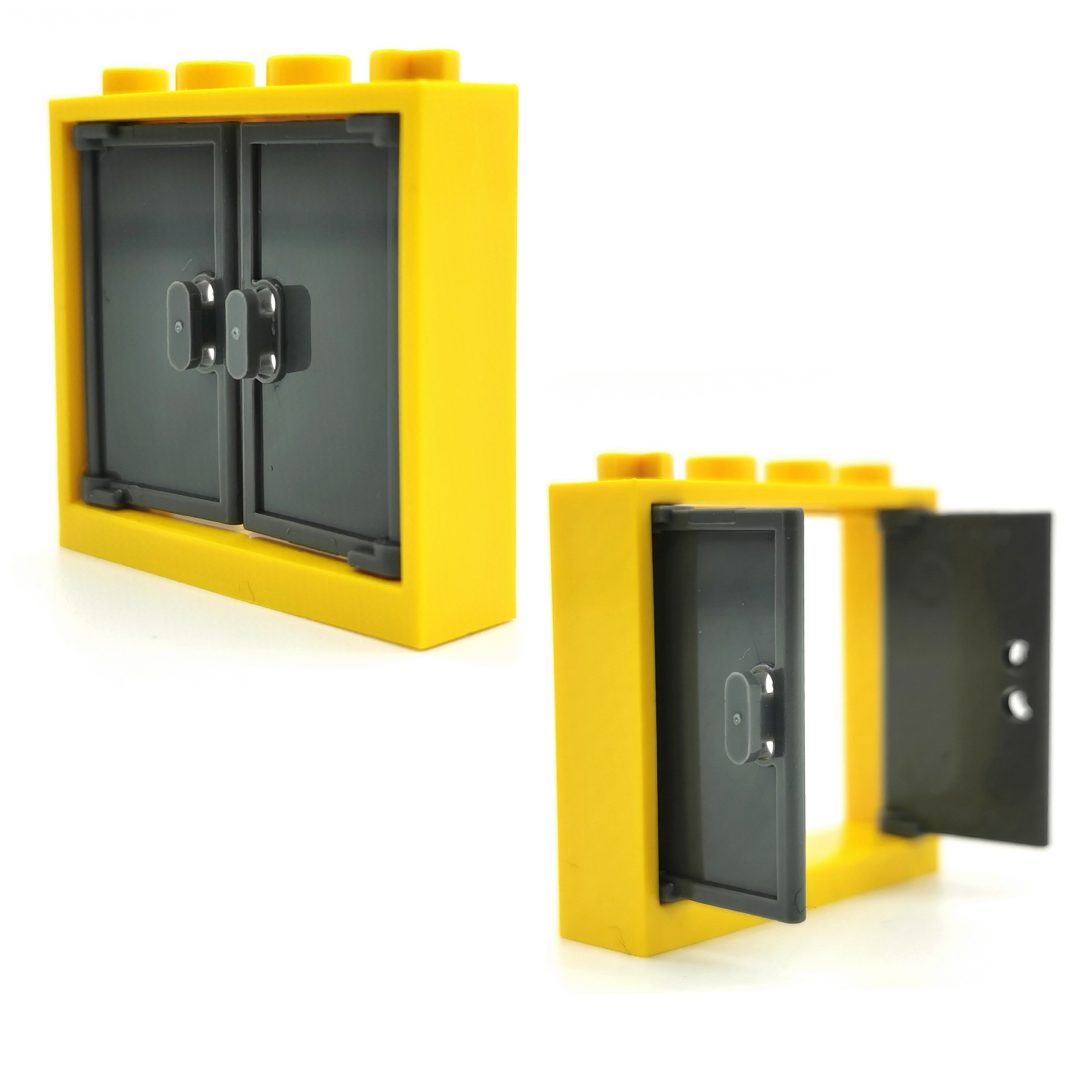 Three sets of wheels are included which allows the Minifigure to maneuver the stand. Two slightly larger ones are the rear and one smaller trolley wheel at the front. It would have to slightly heavier towards the back as to give the Minifigure some leverage as I’d guess it’s a heavy piece of kit. 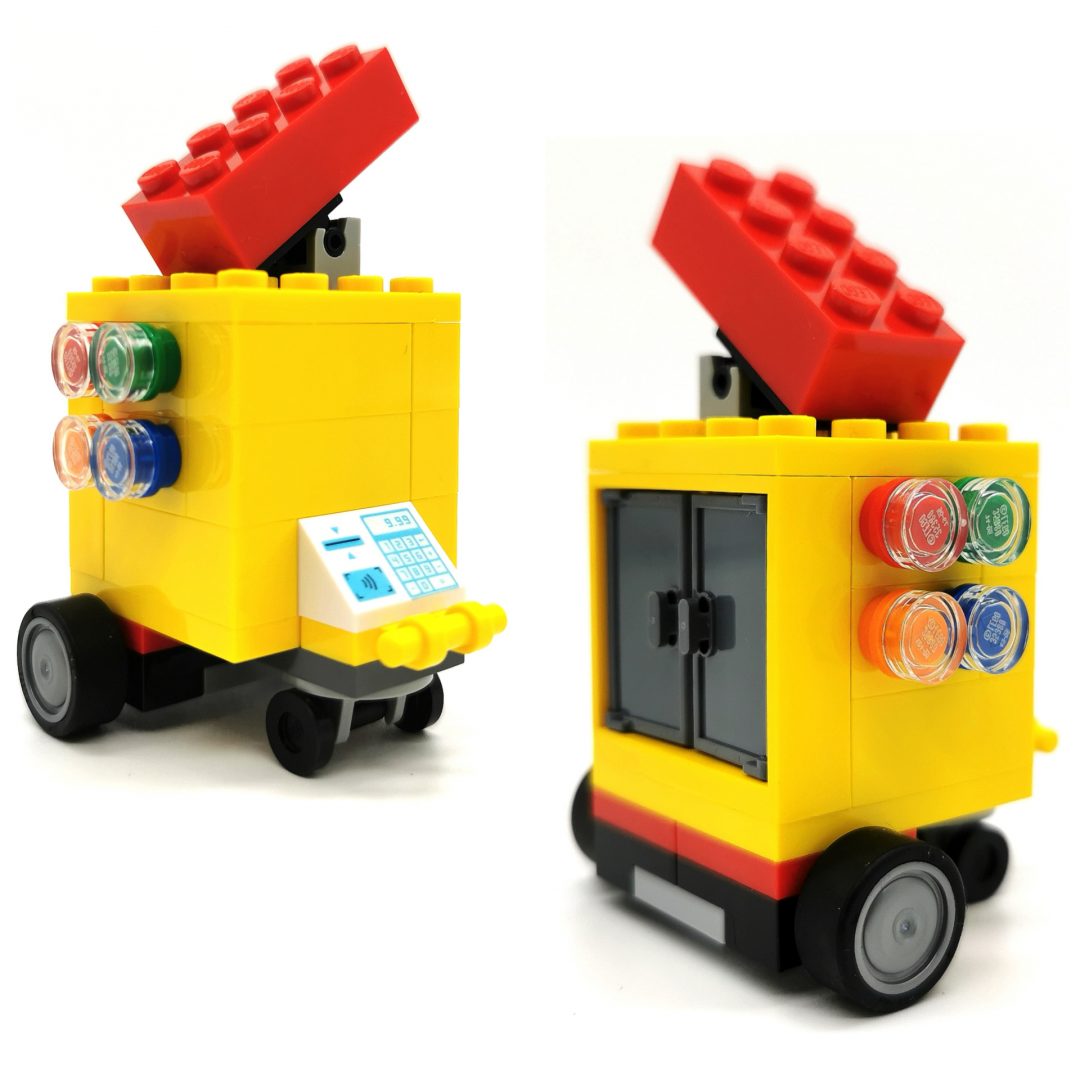 When it comes to LEGO Polybags I look to see if there’s a Minifigure included, being a big collector of them it’s what entices me more to pick it up. The Minifigure included here is top notch and one any fan would love in their collection. It isn’t the first and certainly won’t be the last LEGO branded  Minifigure we see. 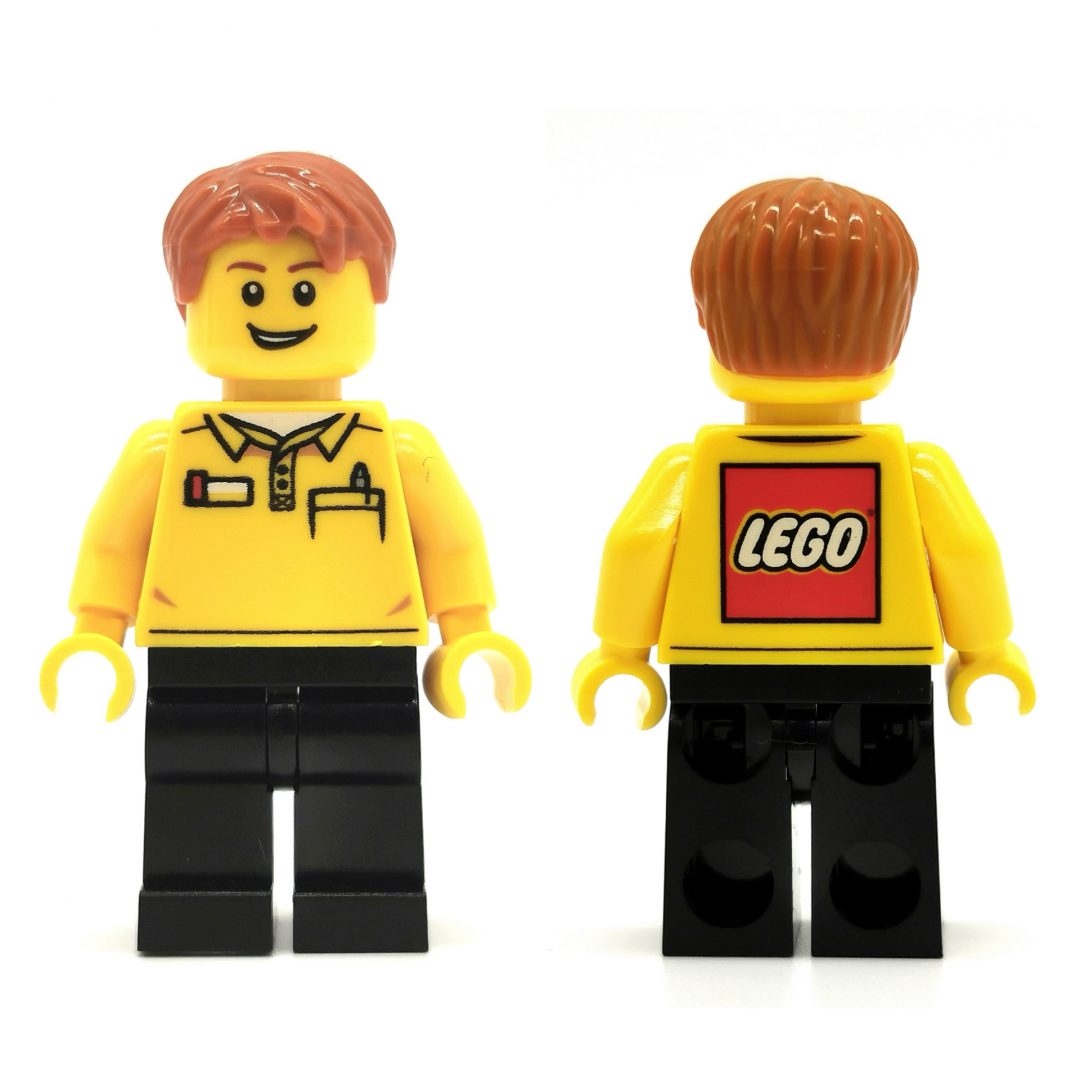 The combination of colours, black and yellow, work really well together, and the print of the torso is spot on. LEGO and their high standard always surprises me as the details are always crisp.

On the front the staff member has a collar with buttons, employee name tag, and a pocket & pen. On the reverse you’ll find the iconic LEGO logo which is quite a substantial size. 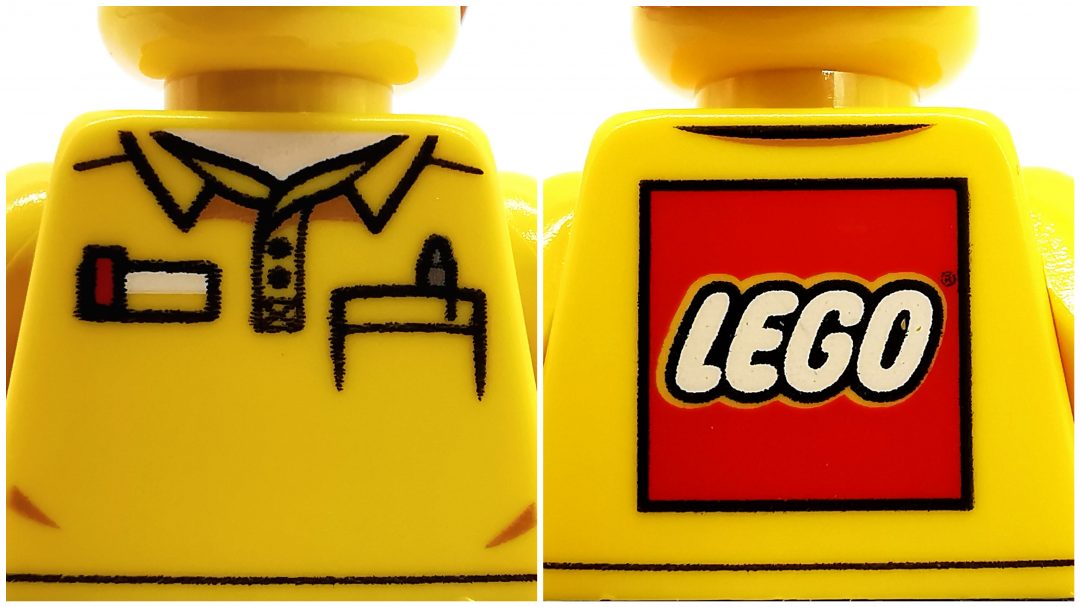 I particularly like when LEGO add subtle shading to their designs, as you can see in the above image the collar looks as though it’s raised somewhat – great detail!

Sadly there isn’t an alternate face, I guess there isn’t really any need for one as LEGO employees are generally happy and always have a smile on their face!

Overall the LEGO City Stand 30569 Polybag is a must have for any LEGO Fan, the Minifigure alone is worth the payout in my opinion.

The build is nice and definitely adds to a Cityscape or display, the playability is also great with the opening/closing compartment, contact less card reader and plenty of LEGO sets to purchase.

Thank you for reading this review, please head down to the comments section and let us know your thoughts regarding this polybag. Don’t forget to leave a rating too with our unique reaction system below. 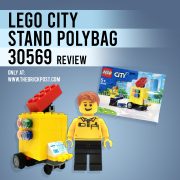 Overall the LEGO City Stand 30569 Polybag is a must have for any LEGO Fan, the Minifigure alone is worth the payout in my opinion. The build is nice and definitely adds to a Cityscape or display, the playability is also great with the opening/closing compartment, contact less card reader and plenty of LEGO sets to purchase. 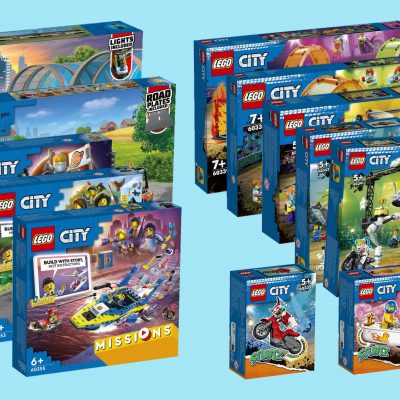 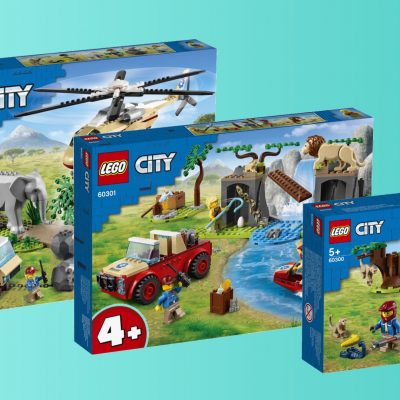