I’m going to dive straight into this review as the included foil pack is another absolute winner from LEGO!

It couldn’t have been timed any better in my opinion as here in the UK lockdown is easing considerably and we’re being vaccinated, so including Doctor & Patient Minifigures along with a bed and some accessories is a touch of genius! 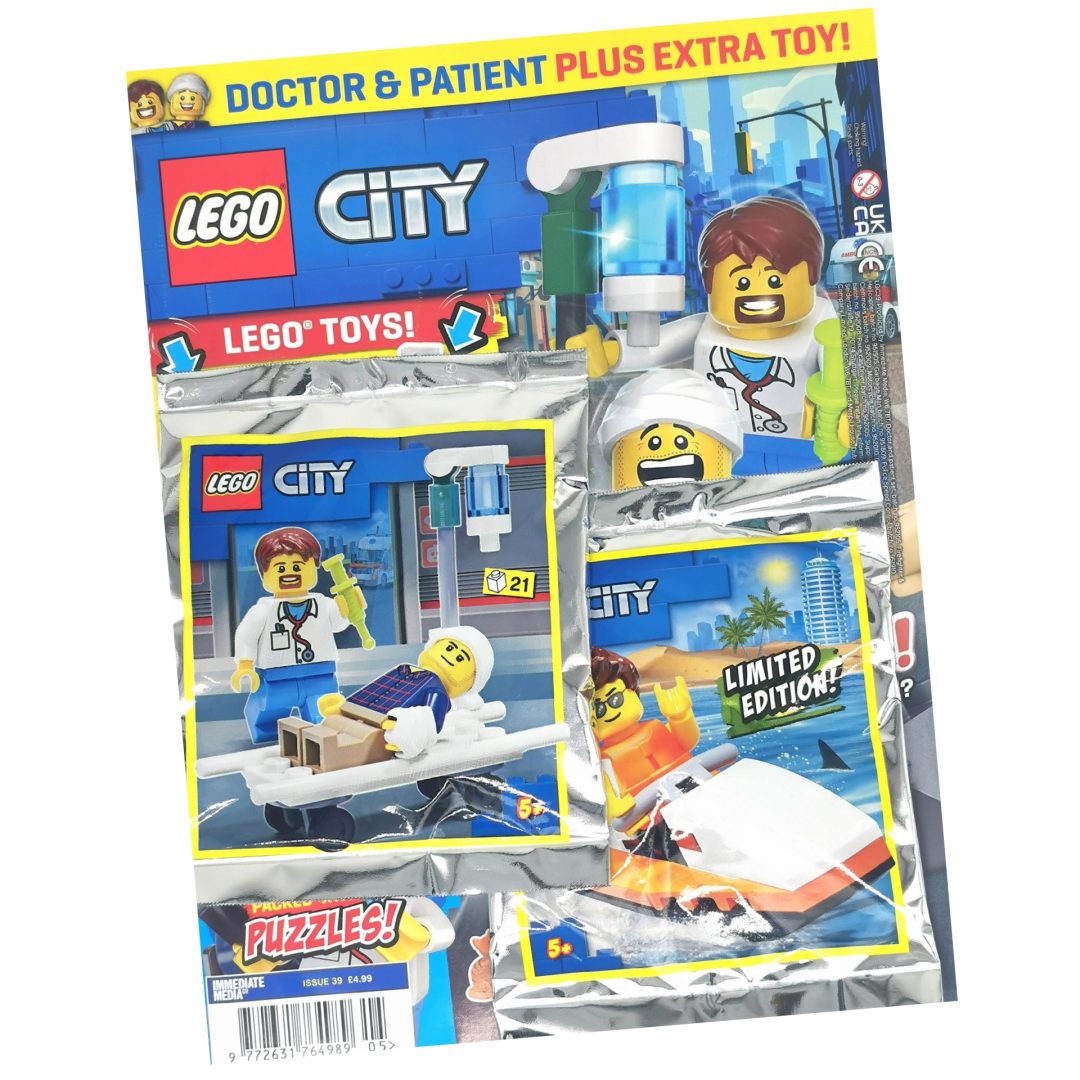 I usually pick up the LEGO City magazines as they tend to have some cracking freebies, upon seeing this on the shelf in my local newsagents I just had to have it. Coming in at £4.99 it isn’t particularly cheap, but bear in mind it comes with a second foil pack, albeit a re-release of the Jet Ski.

The Magazine itself is chock-full of activities and has a great little comic storyline to which features the accompanying Minifigures. LEGO really is onto something here when the story revolves around the freebie in some way, it helps younger fans imagine and play along. 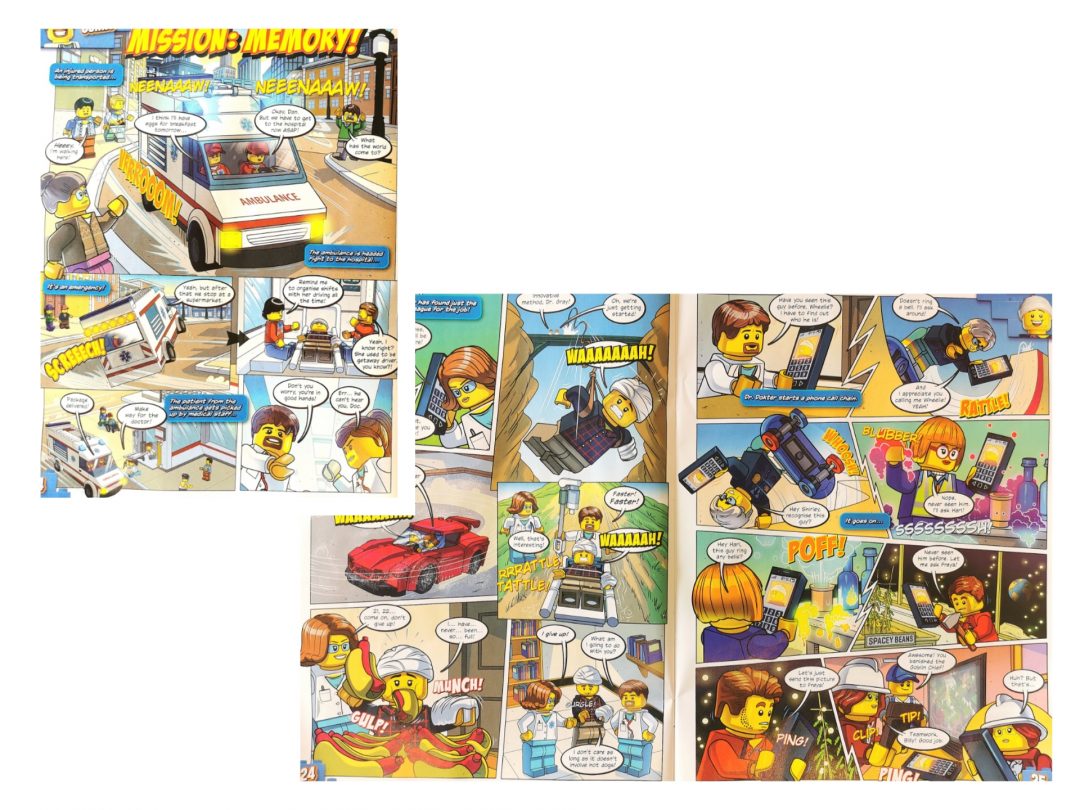 Amoung the many puzzles there are a couple that standout to me as being incredibly fun to play as a family. The first is a turn-based dice game where one player is Dr. Dokter and the other is Patient Charlie. Whoever is the Doctor rolls and goes first, followed by the Patient, in order to proceed the player with the corresponding colour must cross that tile on the board first before anyone else can. You must reach the end first within 20 turns of you’ll have to restart and try again, this adds to the suggested work and who does what in a Hospital which in turn teaches younger fans how things roughly work.

The other interesting activity is called ‘Help and Heal’ and combines several puzzles and tasks to do in order to complete the job. Such as getting the dosage correct by working out how many ml is required, followed by matching up the X-rays and the faces to their correct expressions, finally ending with a physical activity which involves a lot of space and making yourself dizzy – Definitely on for the kids! 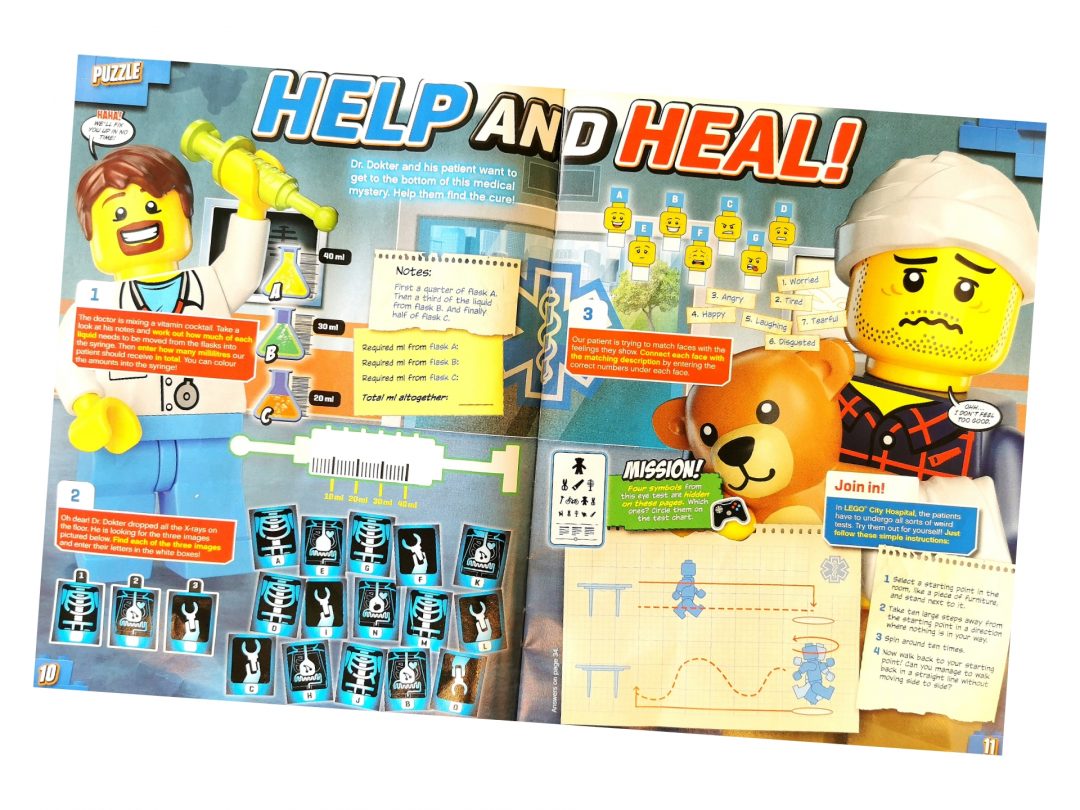 As always the posters are a treat and we’ll worth keeping either for you LEGO room or the Kid’s walls. In this issue the double-sided poster features the two freebie Minifigures, which again is a nice touch by LEGO. Each side of different and sees the two characters playing a console game and messing around in the street on a hospital trolley. 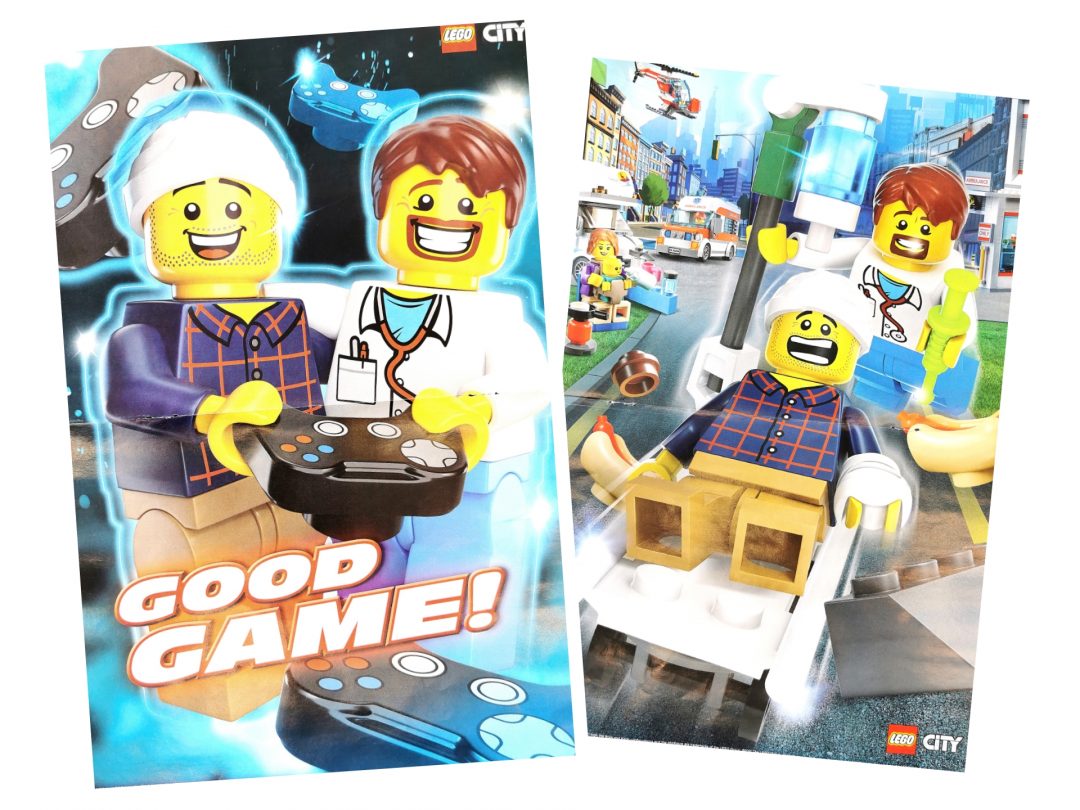 Speaking of hospi trolleys there is a page left blank for you to colour in, it’s based on the poster above. 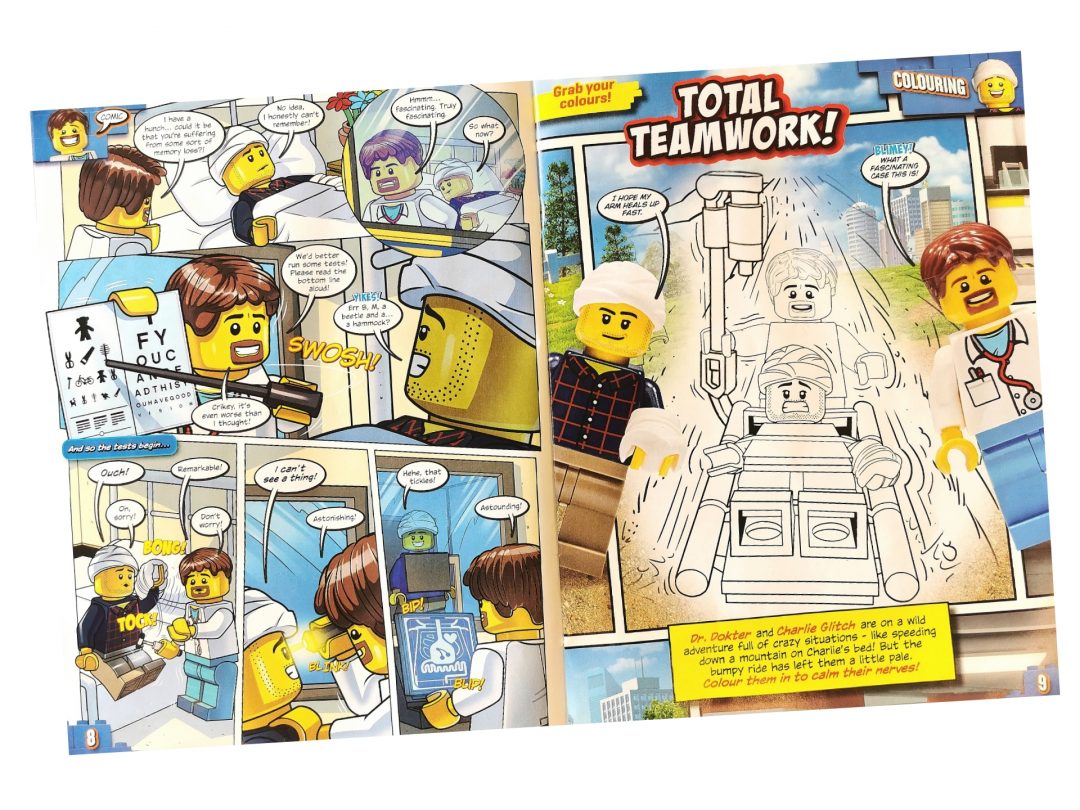 Onto the Minifigures now and starting with Dr. Dokter.

He is of course dressed  appropriately in his hospital attire with a stephigraph around his neck and a pocket full of pens. The plain blue legs suit the whole look and works well. The hair piece has been seen many times before but I must say it’s a decent mould and won’t grumble, same goes for the head and face.

The Patient is dressed in plain clothes, sporting a very snazzy plaid shirt, one of my favourite torsos!

He has plain dark tan legs and again a rather generic face. The main takeaways from both Minifigures are the included accessories, these include a syringe and more importantly a head and hand/arm cast! 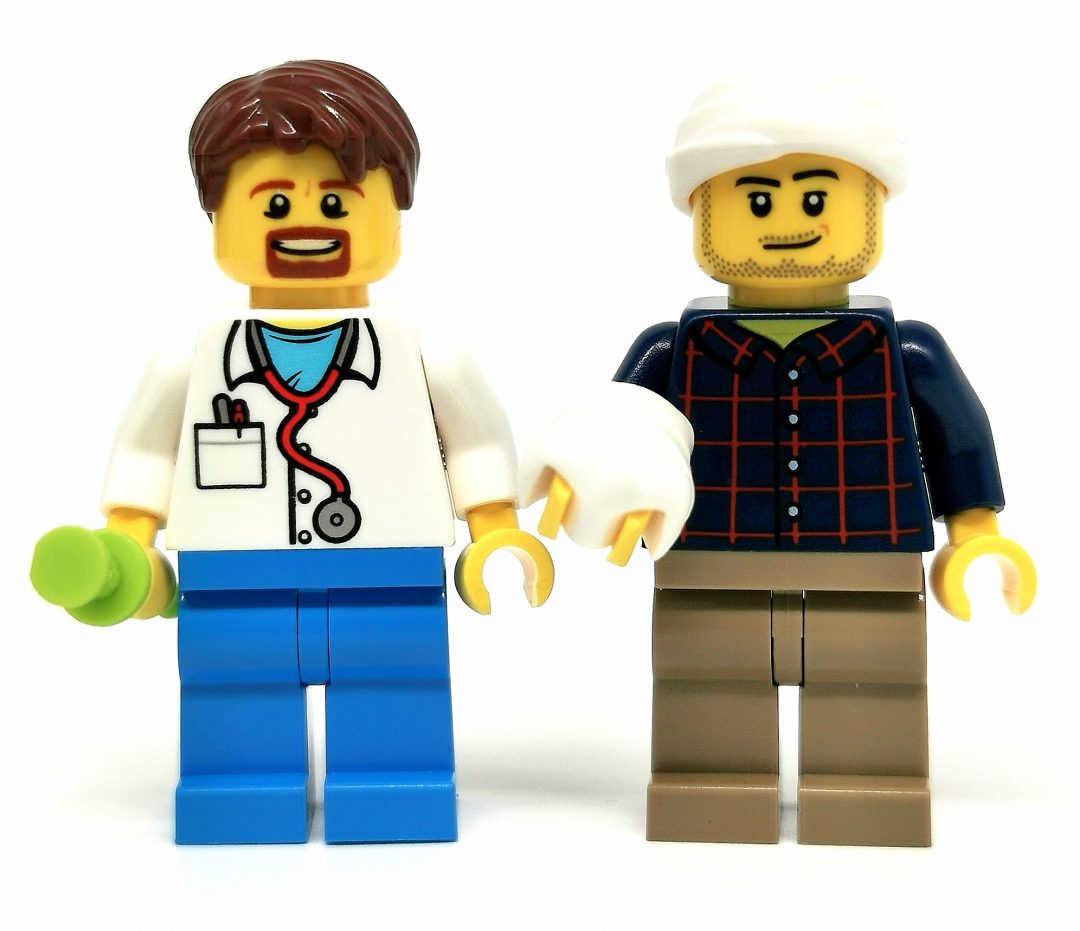 The bed and drip setup is really nice and is a very welcomed addition to the collection, as we rarely get Hospital themed sets.

The parts used aren’t that many and it always surprises me what can be accomplished with just a few pieces. Although the drip arm is a little on the cumbersome side I think it works and fits in with the intended scale. 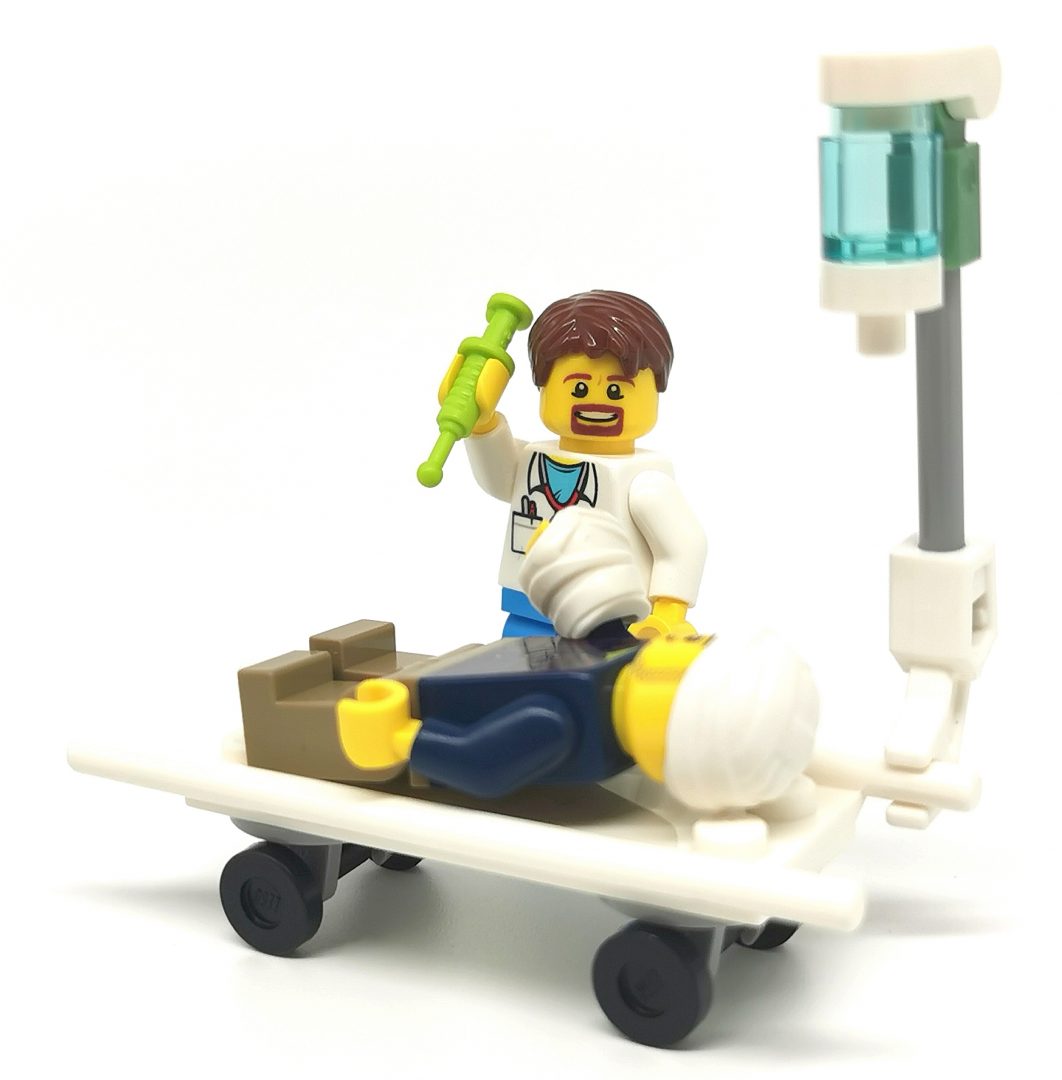 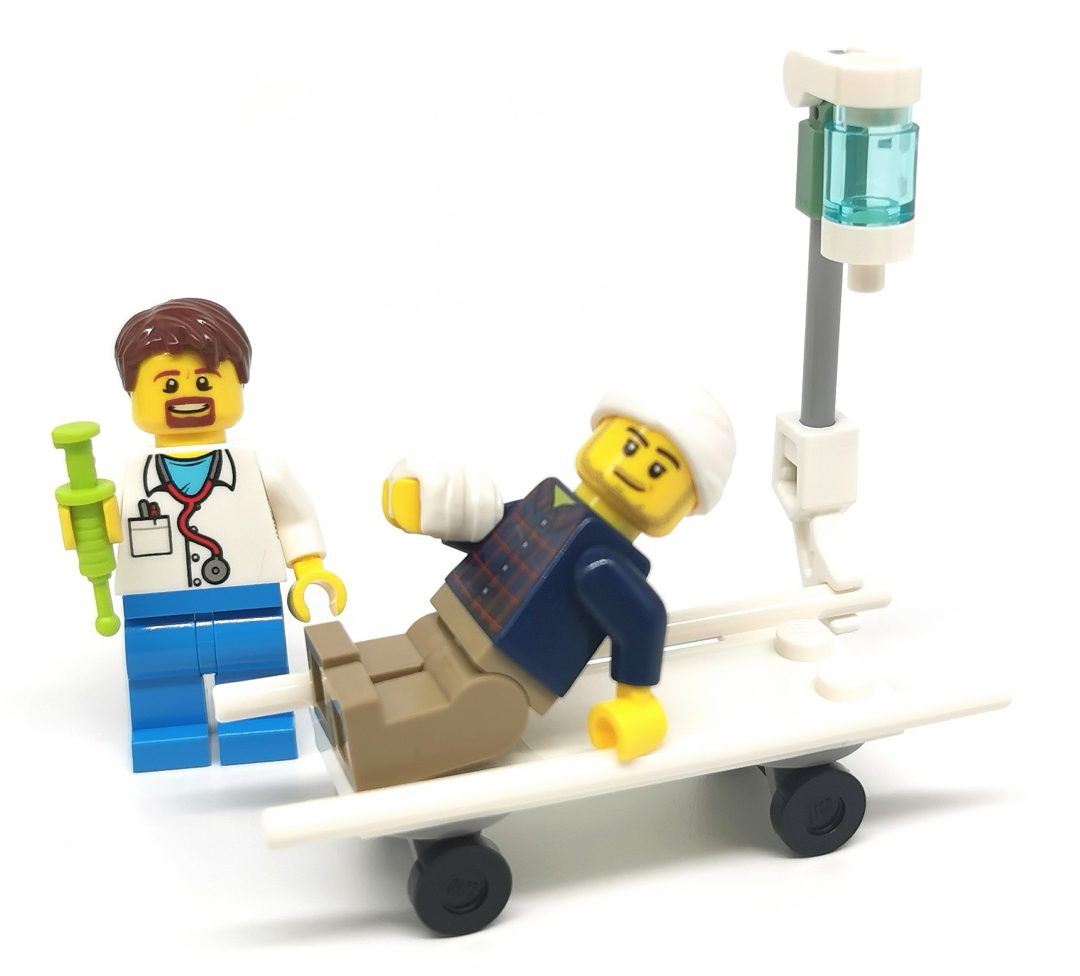 A sneaky peek at the next issues freebie now and one I’ll definitely be picking up, it again fits nicely into your LEGO City and is a much needed service for the towns people, it is of course a ride on Street Sweeper! 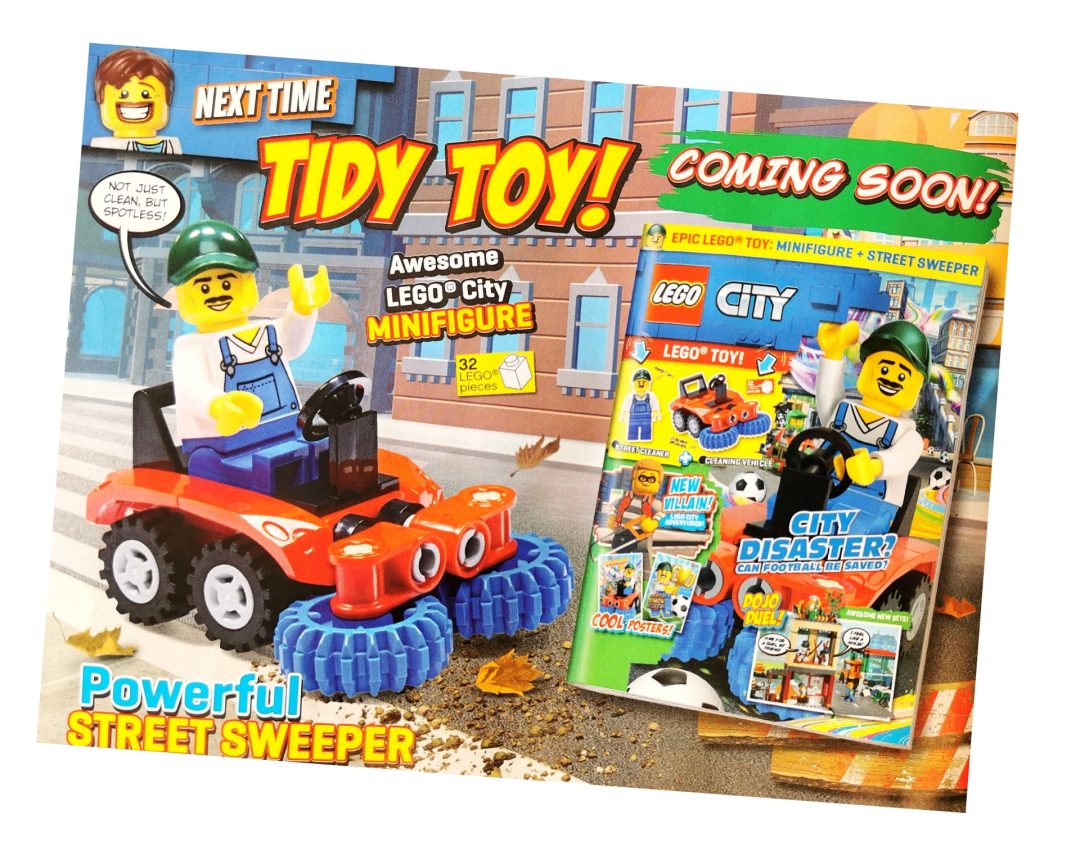 Overall the magazine (issue 39) is OK and pretty much dishes out what other issues have done before albeit slightly different.

The comic story is always a treat and fun to read with younger fans.

Both Minifigures are pretty good and come with some much needed accessories to make the whole playability factor even greater.

Thank you for stopping by and reading this short but informative run-through of the latest LEGO City magazine (issue 39).please head to the comments below and leave your thoughts and any questions you may have! 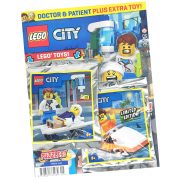 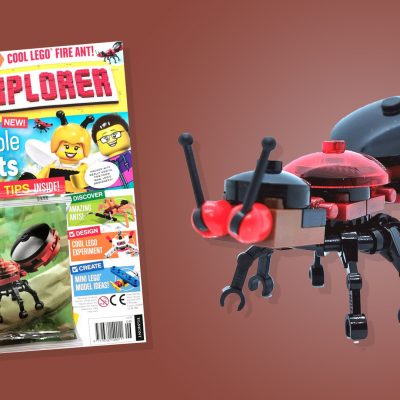 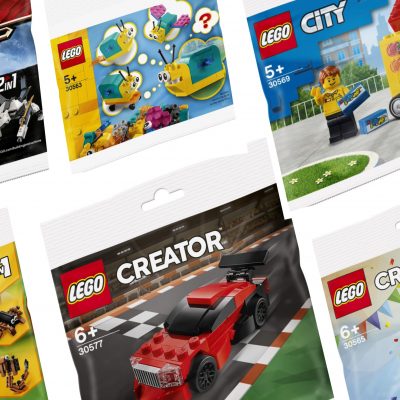