LEGO Technic isn’t my cup of tea, but I must say this small set has made me think twice. It could be the fact there’s a pull-back motor included, which was the main reason to grab this reasonably price set, LEGO Technic Dragster 42103! 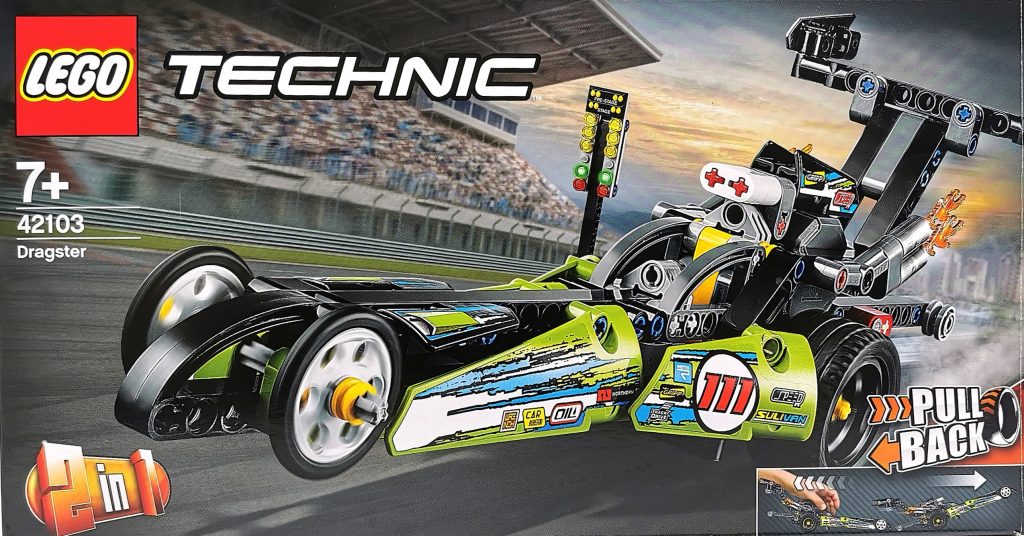 Having never bought or built a LEGO Technic set before I felt as though I should at least give one a go, I may end up liking it and it’ll open up a whole new theme for me to get lost in.

I originally choose this set as I have a passion for collecting LEGO vehicles, or to be exact Minifigure scale ones, though unfortunately this isn’t to that scale.

Bought from Amazon UK at half price was one of the reasons I decided to take the plunge and at just under £10 I couldn’t pass it up. 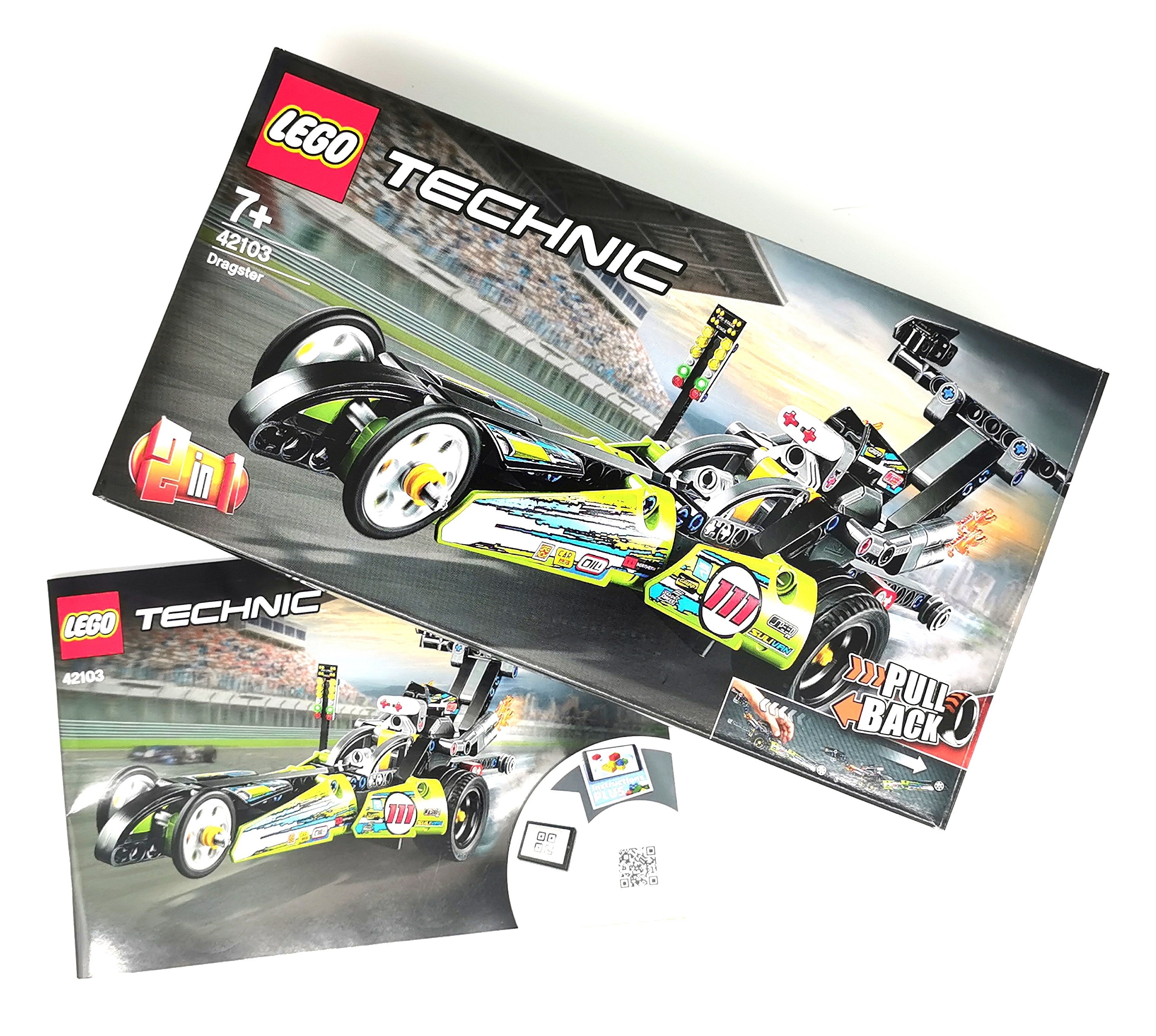 Crack the box open and slide out the contents, two bags, a manual, and some stickers, and start constructing!

The first thing that jumped out at me were the amount of Technic Pin pieces, there were tons on them. I didn’t realise that most of the building techniques used in these types of sets are based on pins, I just assumed, like all other LEGO sets, that there would be some brick clicking going on. 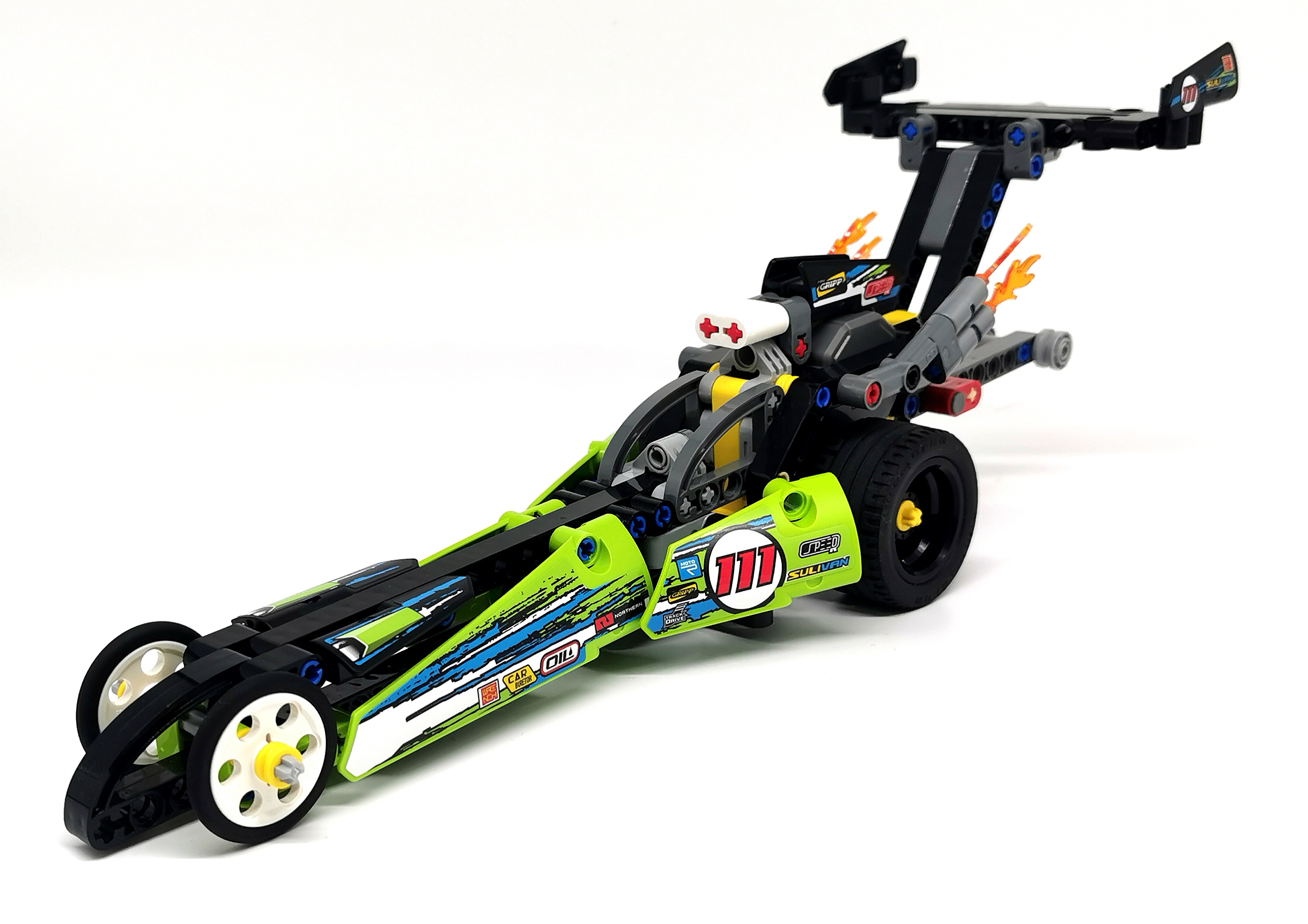 Since the build realied on a main body structure you start off with a long piece and then add almost identical side builds to each half of the body, slowly building up the vehicle itself section by section.

For such a small set it did start to get a little repeatitive. As I mentioned earlier this is my first Technic set so it could be the fact that I just haven’t had any experience with so many pins and connectors before. I must than it has certainly opened up a new way to build, which I’ll no doubt implement in future MOCs. 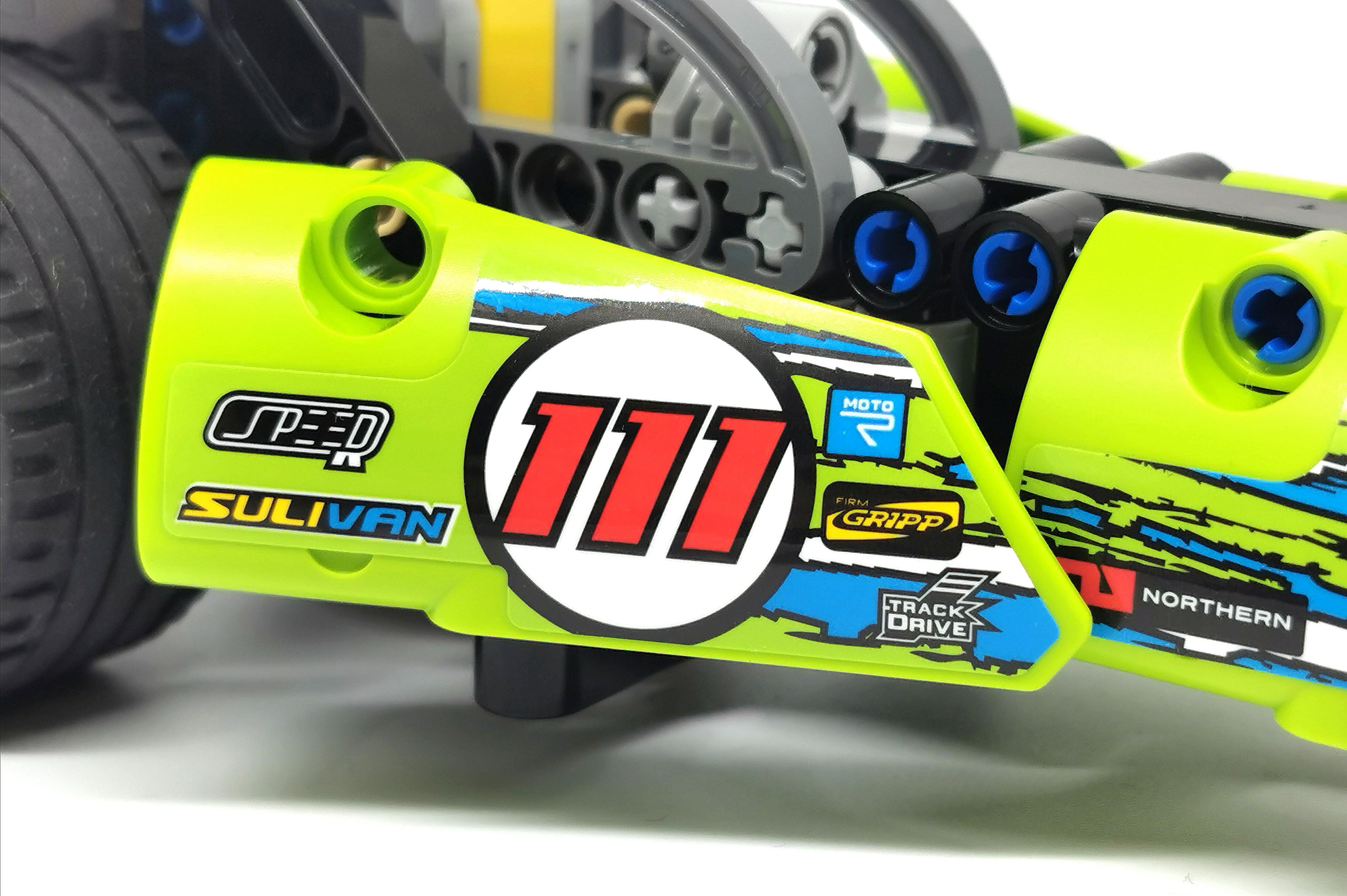 For a set this size and price (RRP £17.99) the part count is average with 225 pieces. I get that the pins could easily bump that up to over average but there are some large panel elements that cover a big portion of the vehicle.

There are thirteen lime panel pieces in total with most of them having      stickers. Which is fine as it does create the overall look of the vehicle. The stickers are a little more tricky to apply as the surface areas are slightly curved with some even having mould dimples slap-bang in the centre!

Now onto the main draw of this set, the pull-back motor and it’s functionality.

I’ve had a few pull-back motors in my time, mostly from the Shell polybags that came out many years ago. They had tiny motors built into the baseplate/chassis rather than being separate elements.

The one included here is just a tad more powerful, so-much-so it makes the entire front-end shoot up into the air and wheelie off into the Sunset! 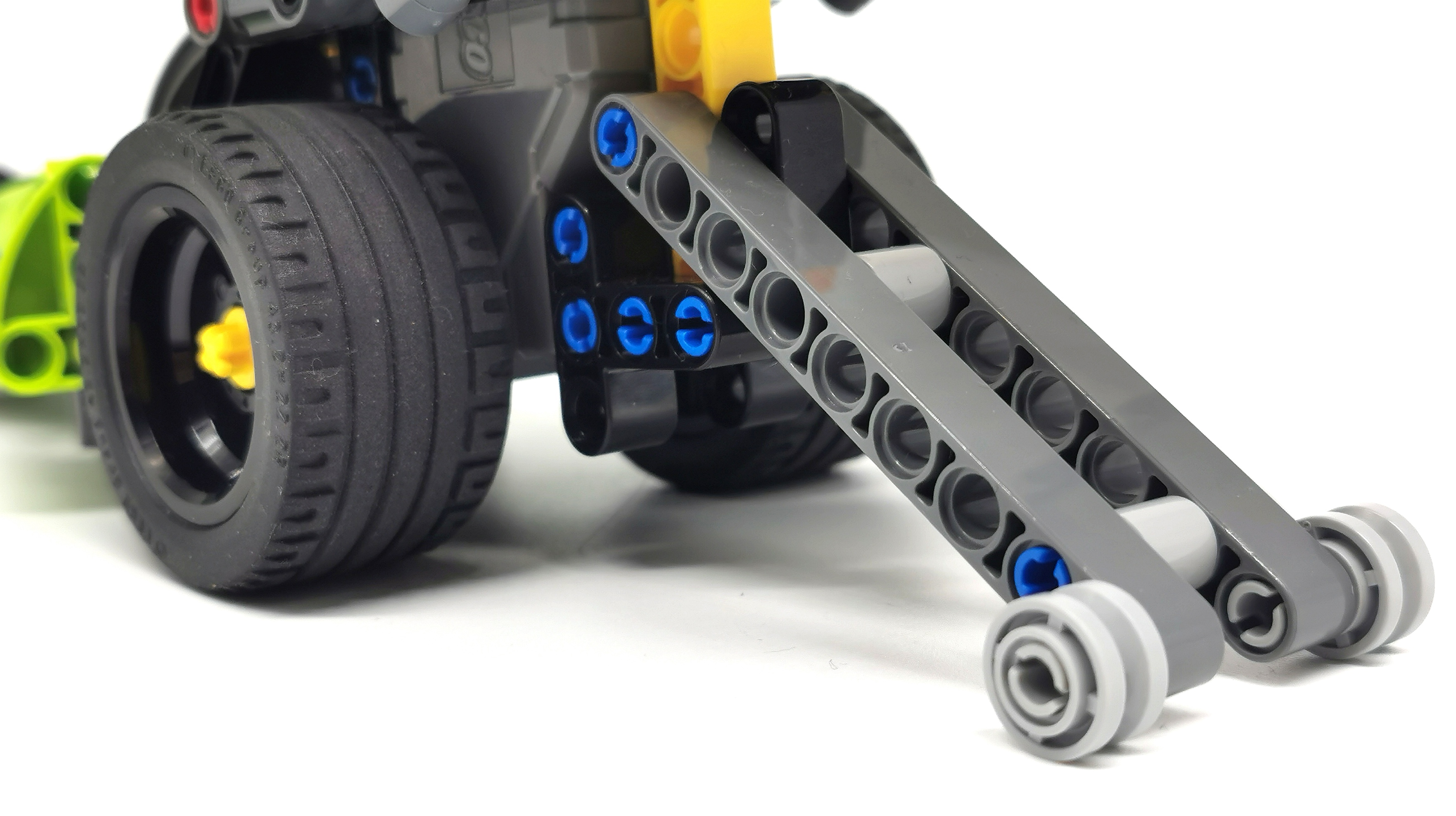 Just like real-life Dragsters, there is a special bar that protrudes out the back to stop it from taking flight. This one has a brick-built bar, and it needs it.

There is a handy pin that you can slide out and it releases the whole back bar contraption, making for some great fun and exicting playability. Give it a go! 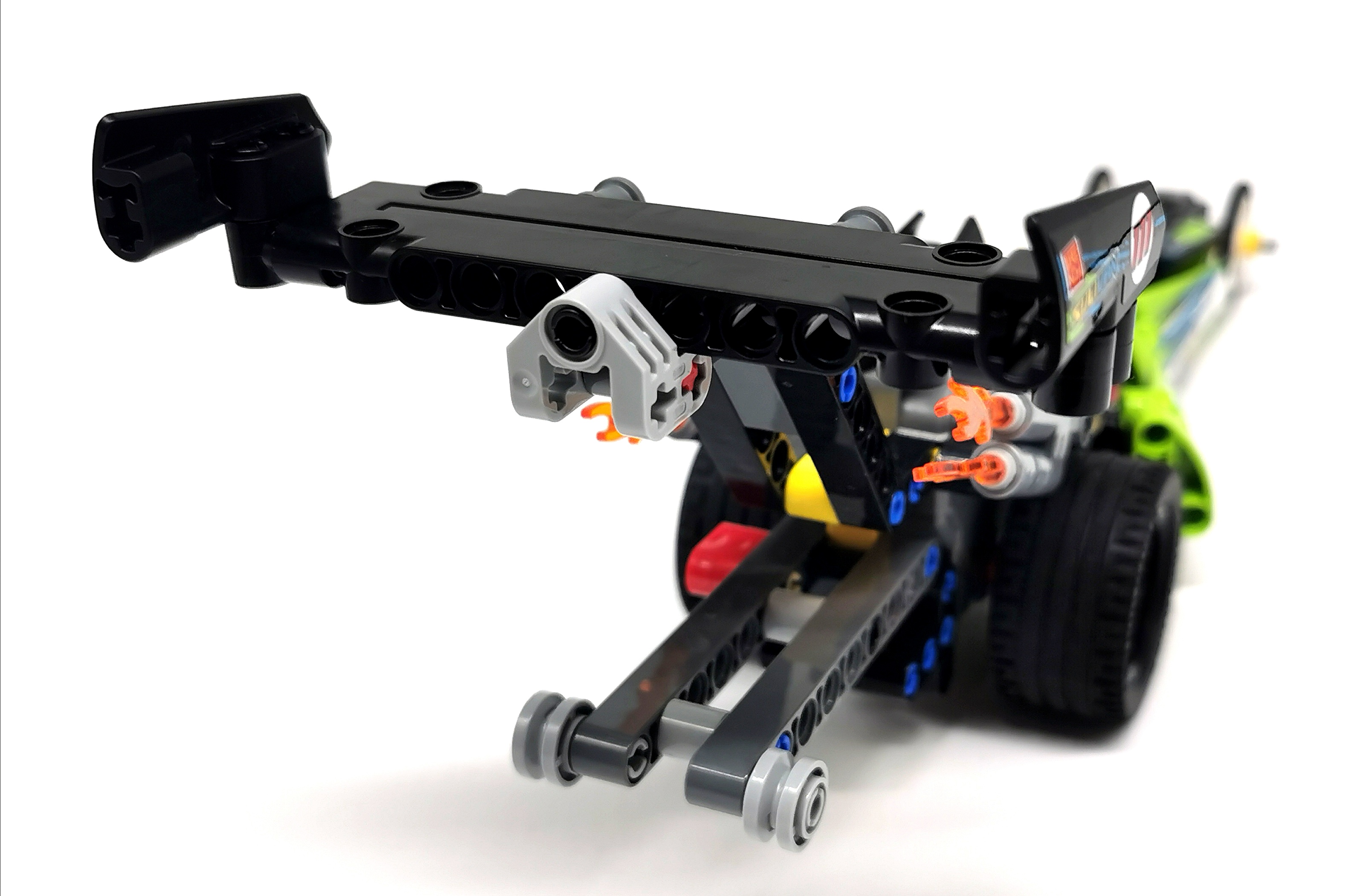 It wouldn’t be a true Dragster if there wasn’t an over the top spoiler attached to it. This one is mostly one whole piece, in which you slot yet more pins into to attach the side fenders.

The whole thing is solid and it won’t break easy, unlike its brick-built counterpart would (at those speeds). The Technic theme is now a new possibility for me and I may try some others along the same lines as this Dragster.

Do you enjoy what LEGO Technic has to offer? Let us know in the comments below.

Overall the build was somewhat enjoyable, not being a LEGO Technics fan and never owning a set, i felt compelled to at least try one. The Dragster jumped out at me not just because it was half price, but because it had a pull-back motor included. Which will come in handy for vehicle MOCs. It was daunting seeing all those pin pieces in one set, as you don't usually see that many in ordinary LEGO sets. Great build none-the-less and well worth the cost, even at RRP the cost seems good. 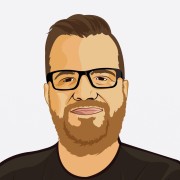 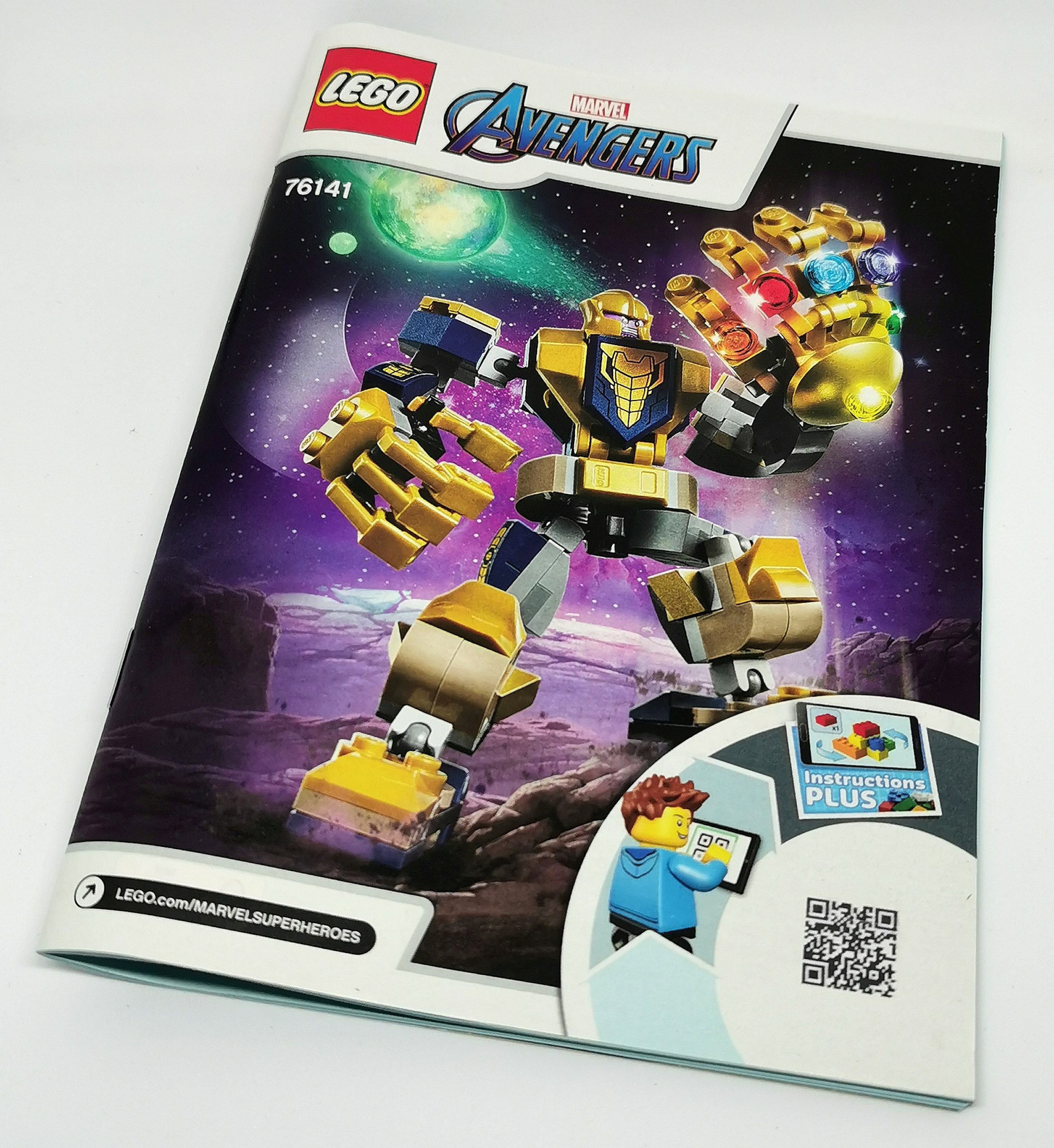