We managed to get our hands on this awesome LEGO Ninjago polybag, which is due to be a GWP (gift with purchase) from 15th February 2021 to the end of the month on orders £40 and over. 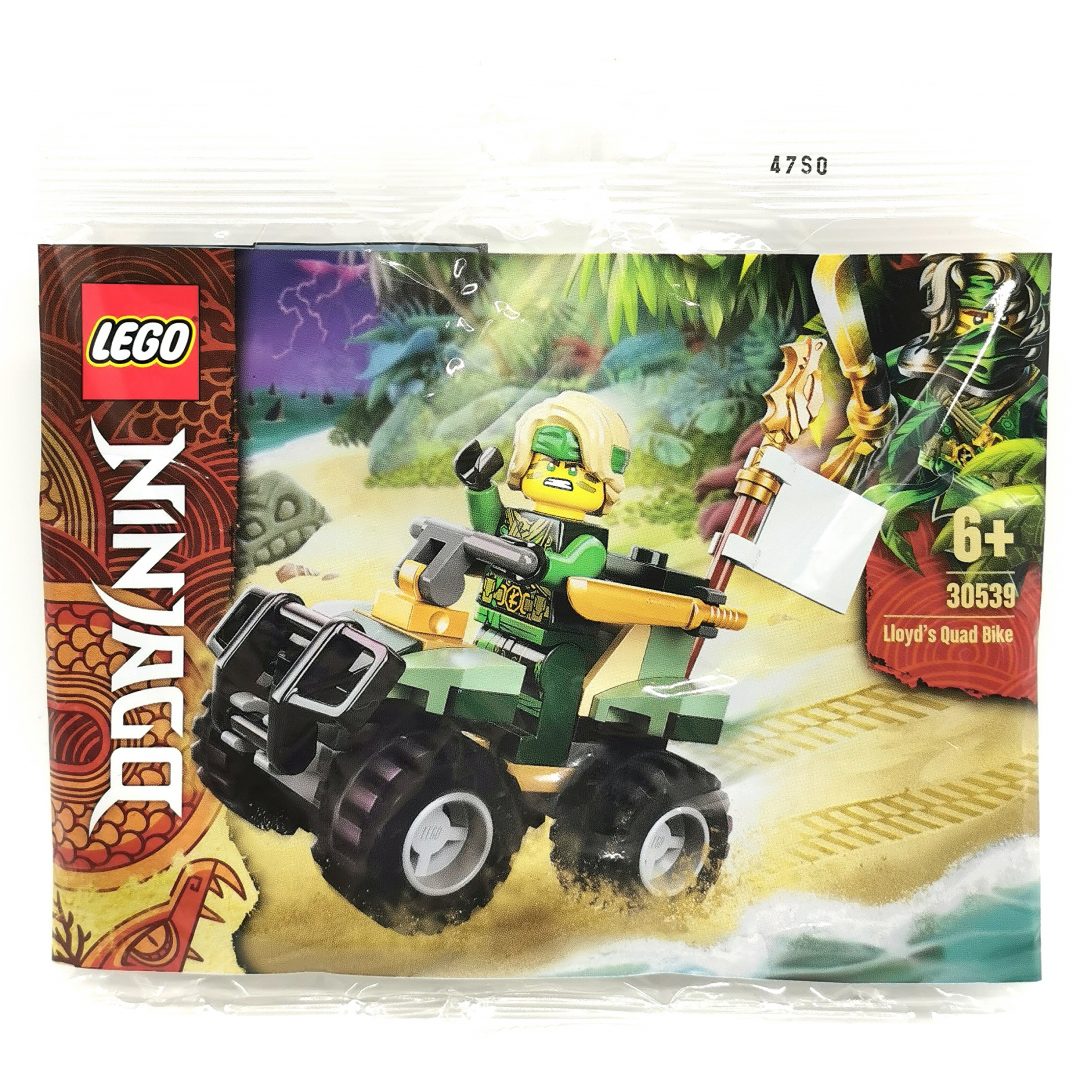 The packaging has undergone quite a substantial redesign, with the red Dragon slithering down the left-hand side, the ominous sky and sea in the background, and the island and Lloyd in the foregroung – it looks fab!

Pop open the polybag itself and you get a nice array of colours and parts, the sand green elements always catch my eye. You also notice some rather nice looking gold pieces too, these are indeed machetes but produced in the gold colour, nice. 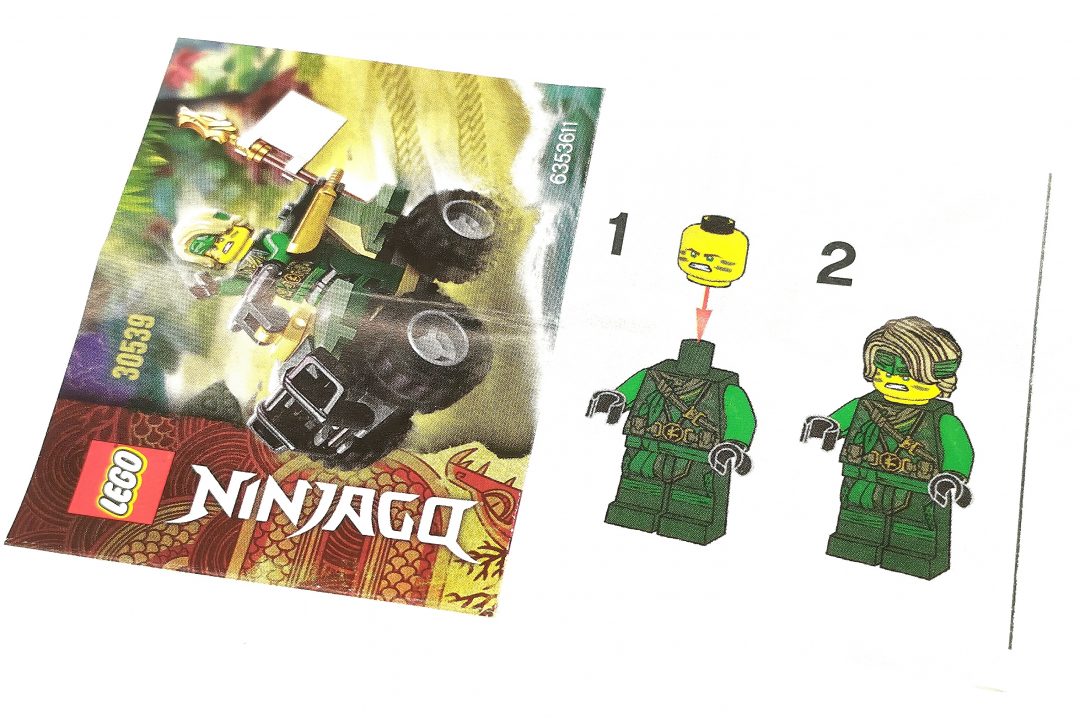 It features a new Lloyd Minifigure which hasn’t been seen before. The printing on both the torso and legs is stunning and focuses on the island/survivor theme.

His torso is covered with belts, buckles, pockets, and is made to blend in with the island surroundings. His legs carry on the print with a belt/sash around his waist and knee coverings in the same fabric style.

Turn Lloyd around and we see, peeking from under a strap, his Ninjago logo, L. The whole look of him is great and being a unique combination of parts makes him somewhat exclusive to this polybag. 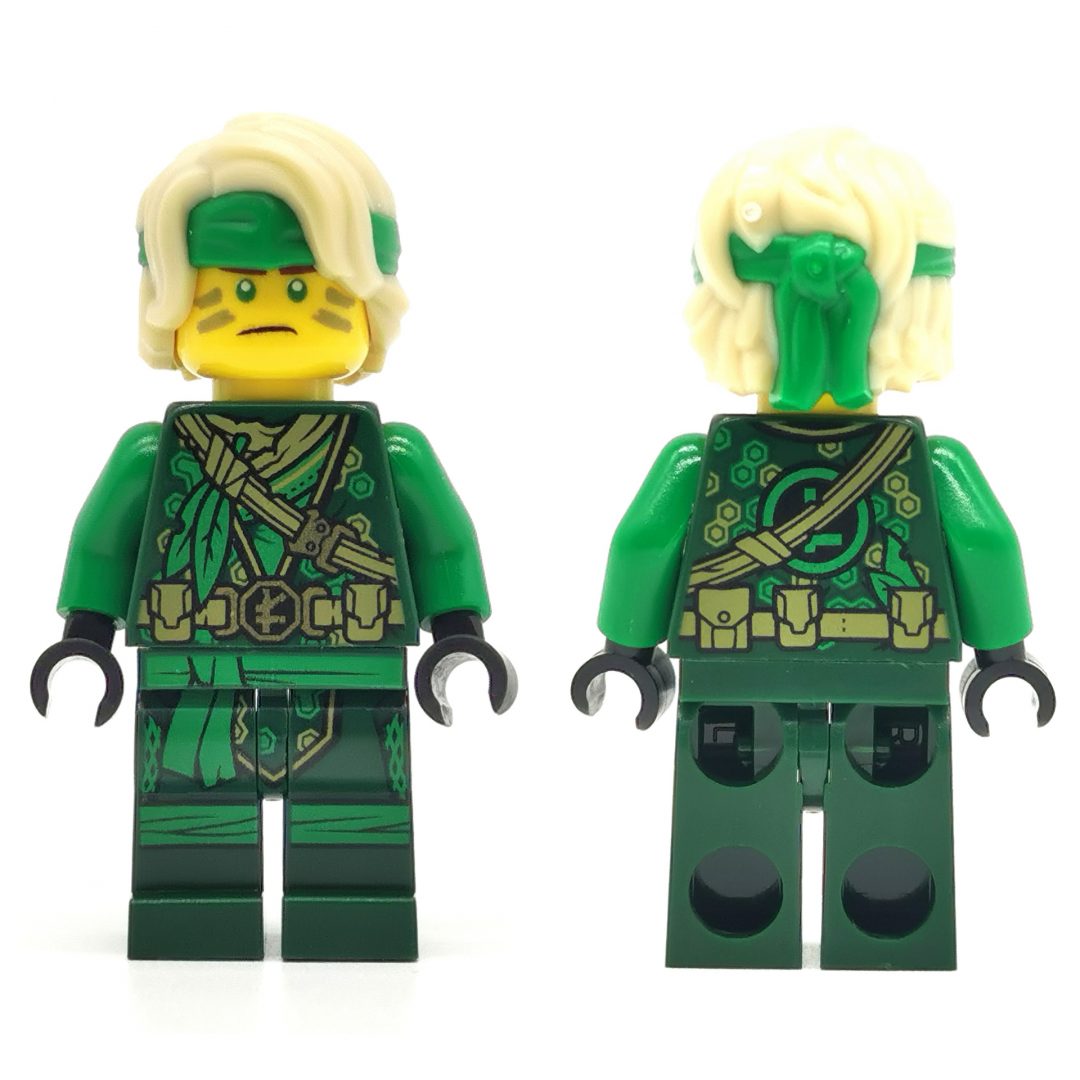 The hair piece is dual moulded and again looks stunning, one of the top reasons to grab this little set. Lloyd’s floppy hair hangs over part of his green bandana.

I particularly like the camo face paint marks, it’s a sign he’s ready for battle. The same is repeated on his alternate face which features a more angrier expression. 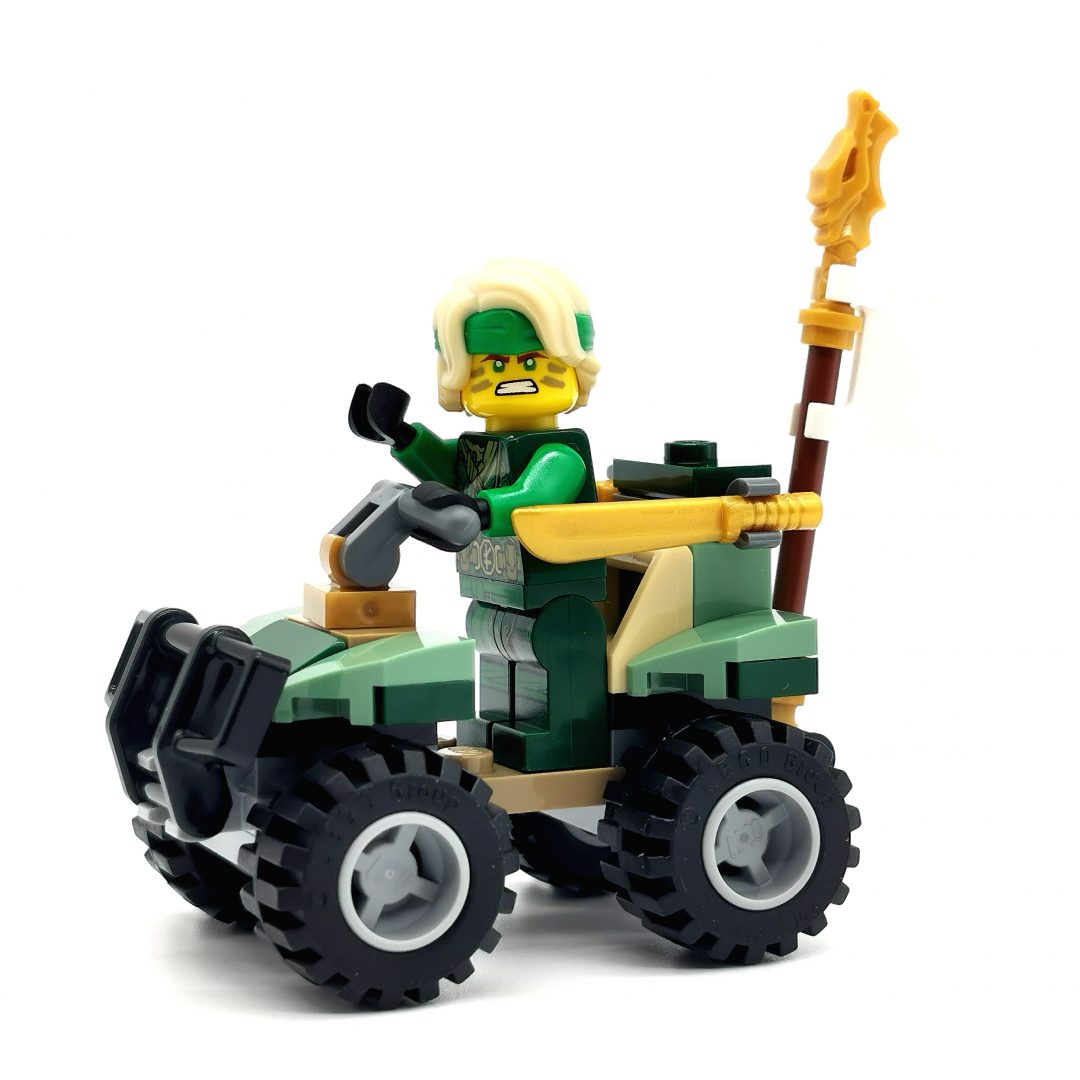 The Quad Bike build itself is, shall we say, a little lacking in parts. It’s made entirely from bricks as opposed to the use of a moulded wheel base, which in itself is great and should be applauded. The real let down are the wheel-arches in my opinion, they just don’t stay on, especially when removing Lloyd from the driving position, his grip is far stronger than the studs clutch power is. 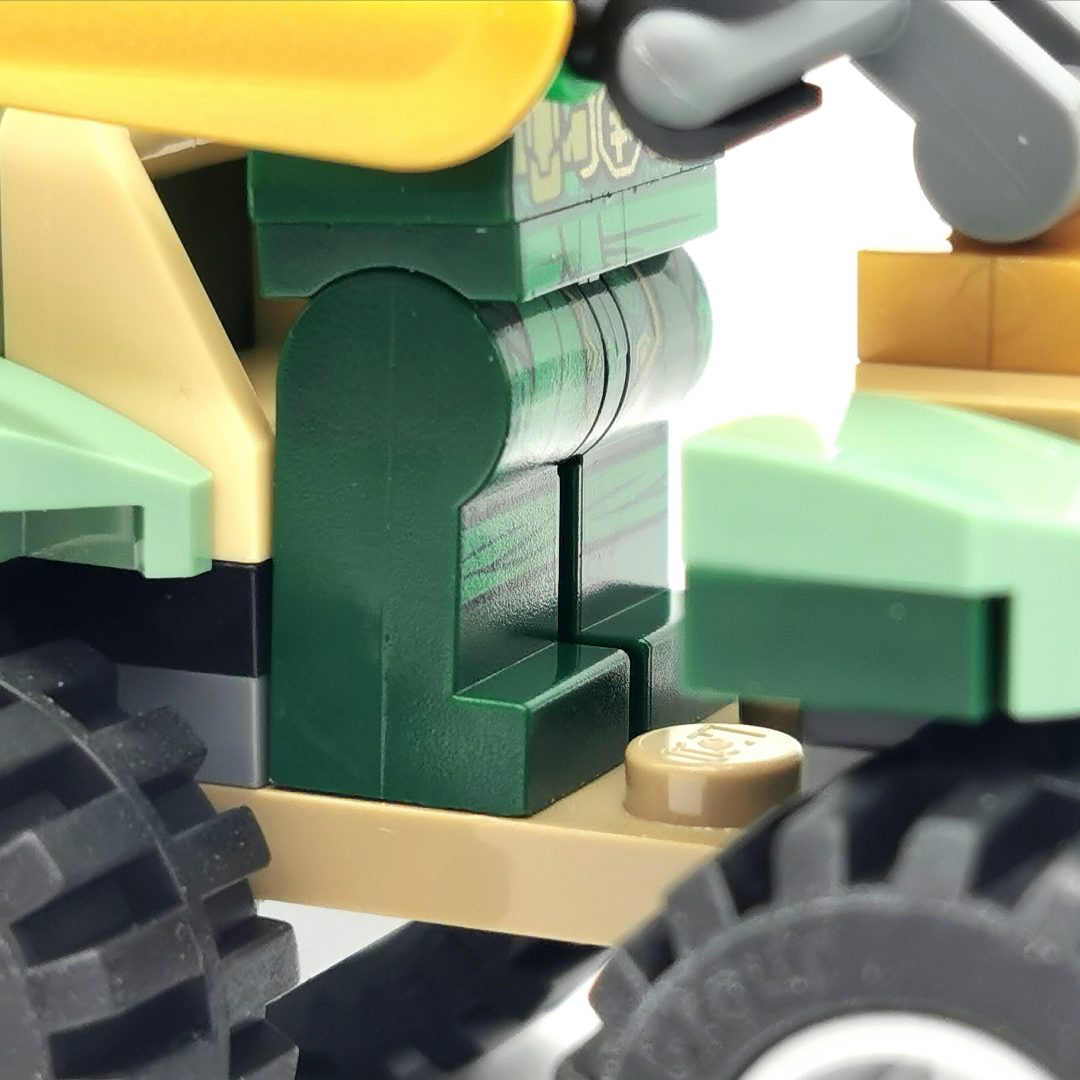 There isn’t a seat included, which is fair enough, as being a ‘cool kid’ you’d always stand up anyway – oh and don’t get me started on where the machetes are placed. They sit right next to your head and shoulders, one false move or deep pothole and you’d end up in A&E. 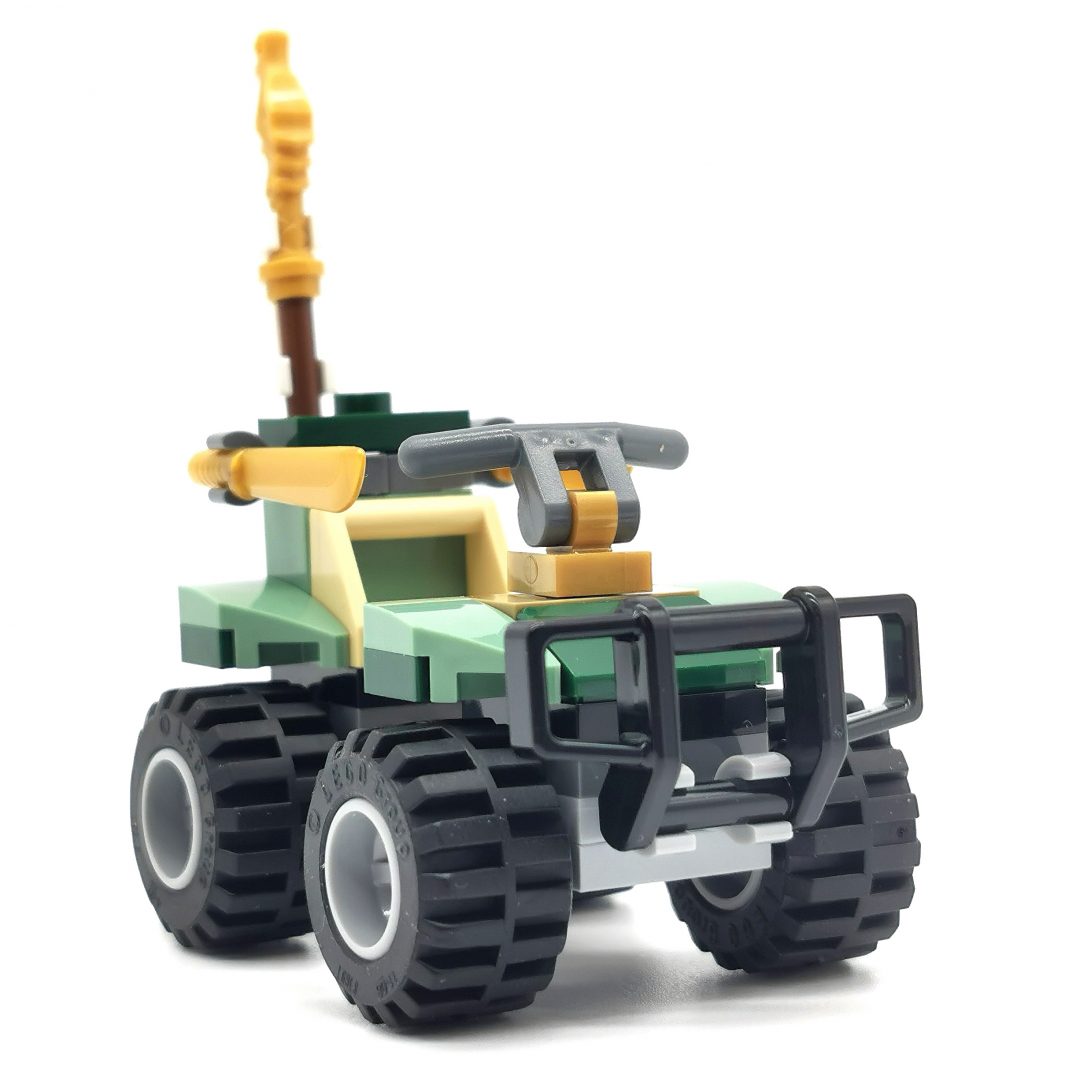 That last scenario was purely figurative of course, and only applies if we look at it from a Minifigures point of view.

It’s a shame really as the overall look has so much going for it, from the chassis shape and the front bumper to the big chunky off-road tyres. 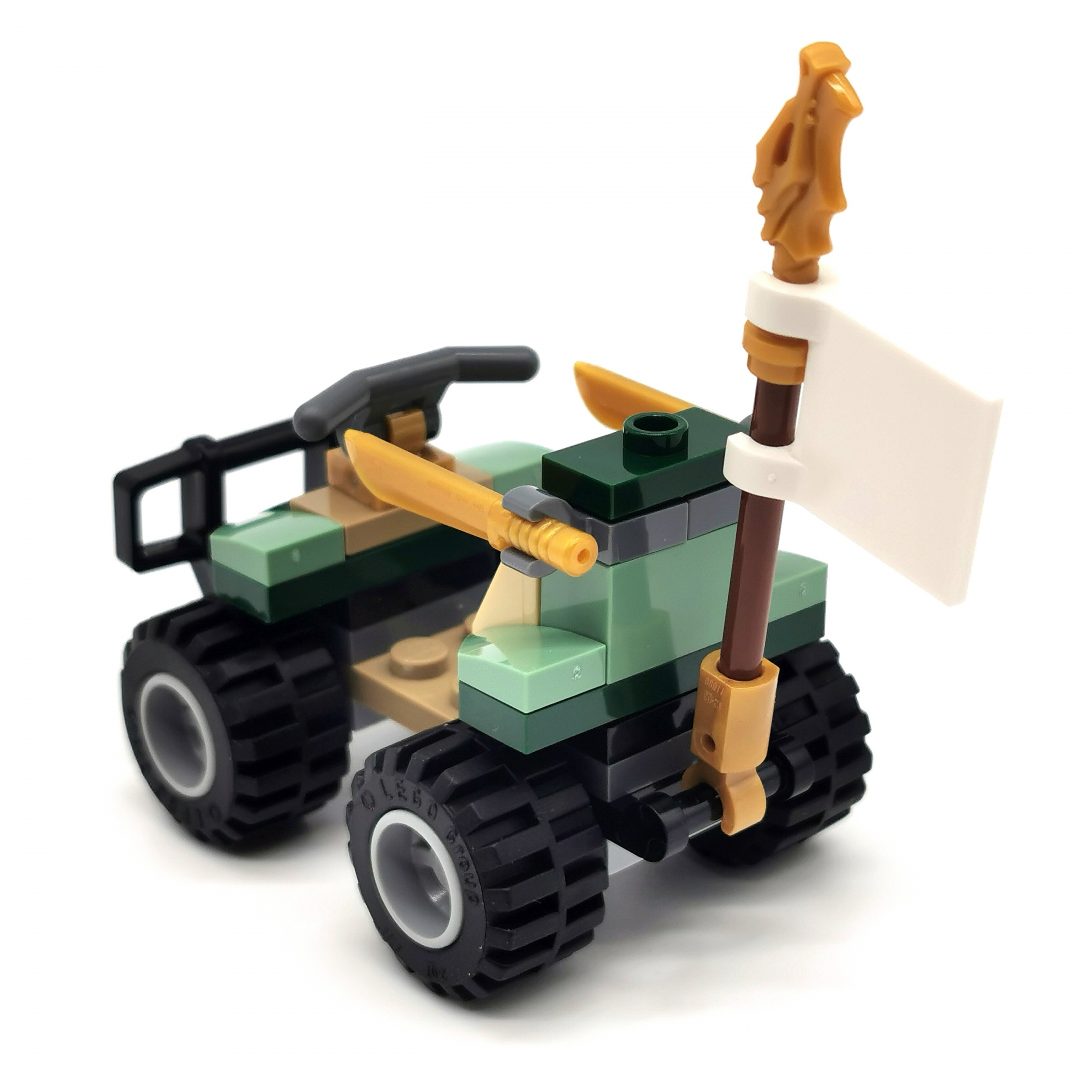 The blank white flag which hangs from the staff attached at the back is a tad odd, we can only speculate as to its meaning and await the release of the new season of the LEGO Ninjago TV show, season 14 I believe. 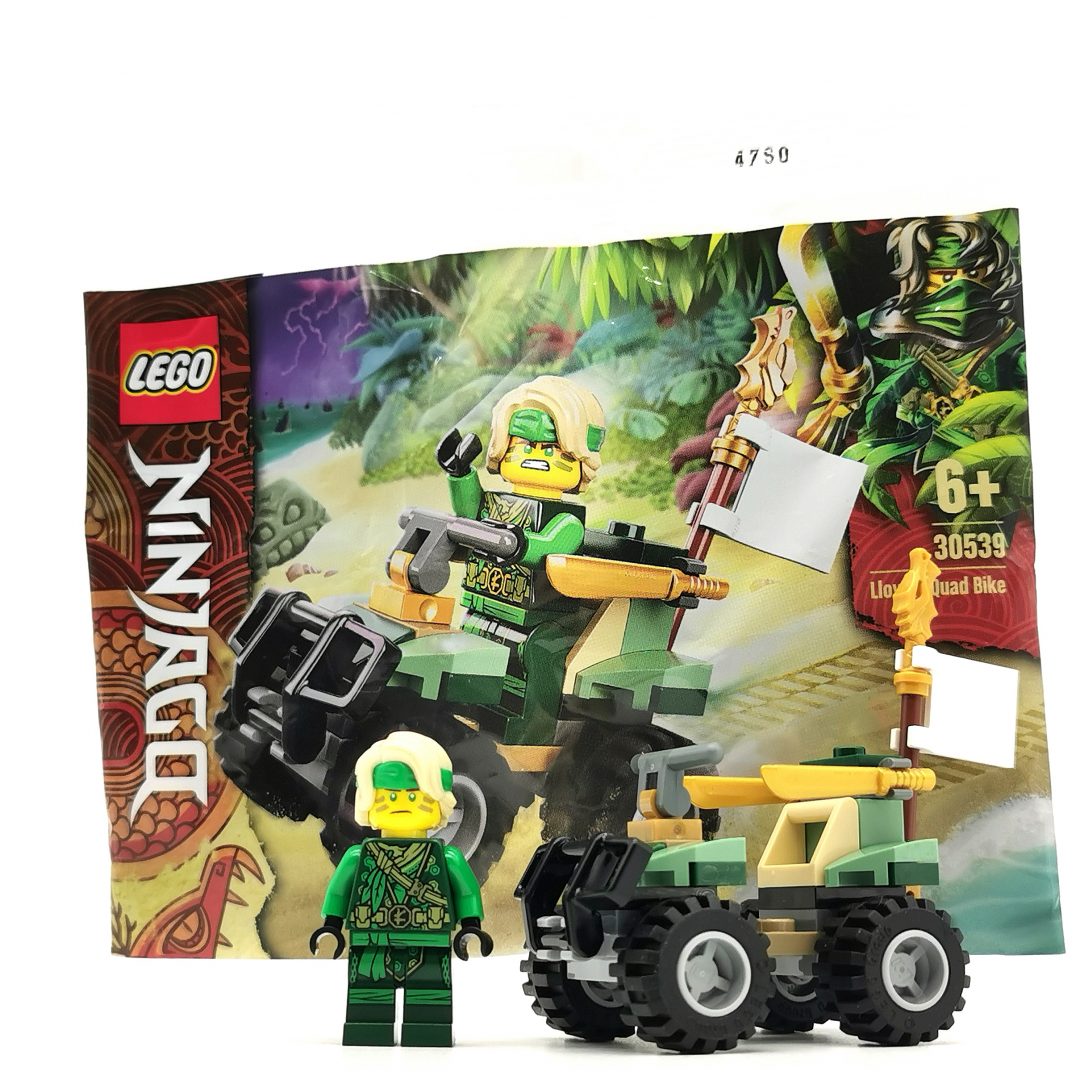 There are many nice parts in this polybag, sand green angled tiles , gold machetes etc, they’re almost better off not being made into the intended Quad Bike – a little drastic to say I know but it’s my honest opinion. The only real thing going for it is the Minifigure and the well designed packaging.

We hope you enjoyed scrolling through our review and have a better understanding on the upcoming LEGO GWP polybag.

If youd like to leave a comment please do so below – also why not leave this set a reaction rating using our unique brick head system, also found below. 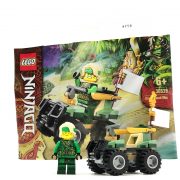 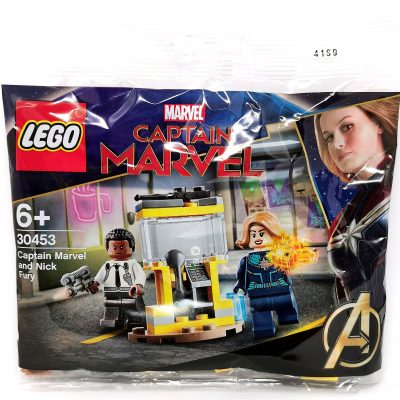 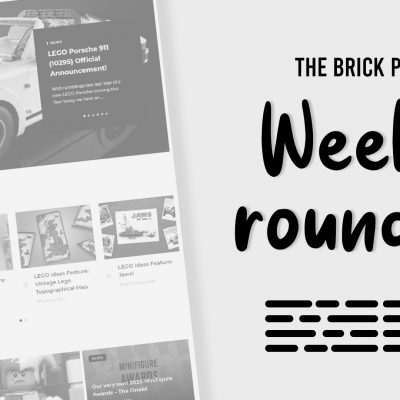